The Death Knight is Hearthstone's newest hero for constructed. There are three sets of cards: Death Knight, the core set, and the Path of Arthas. This list covers the 10 best cards selected from these sets, including cards Blood rune cards, Frost rune cards, and Unholy rune cards.

These card types define how each deck works, and so far, there is an excellent array of deck-building synergies you can try out. So, in no particular order, here are some of the standout cards for Death Knight. 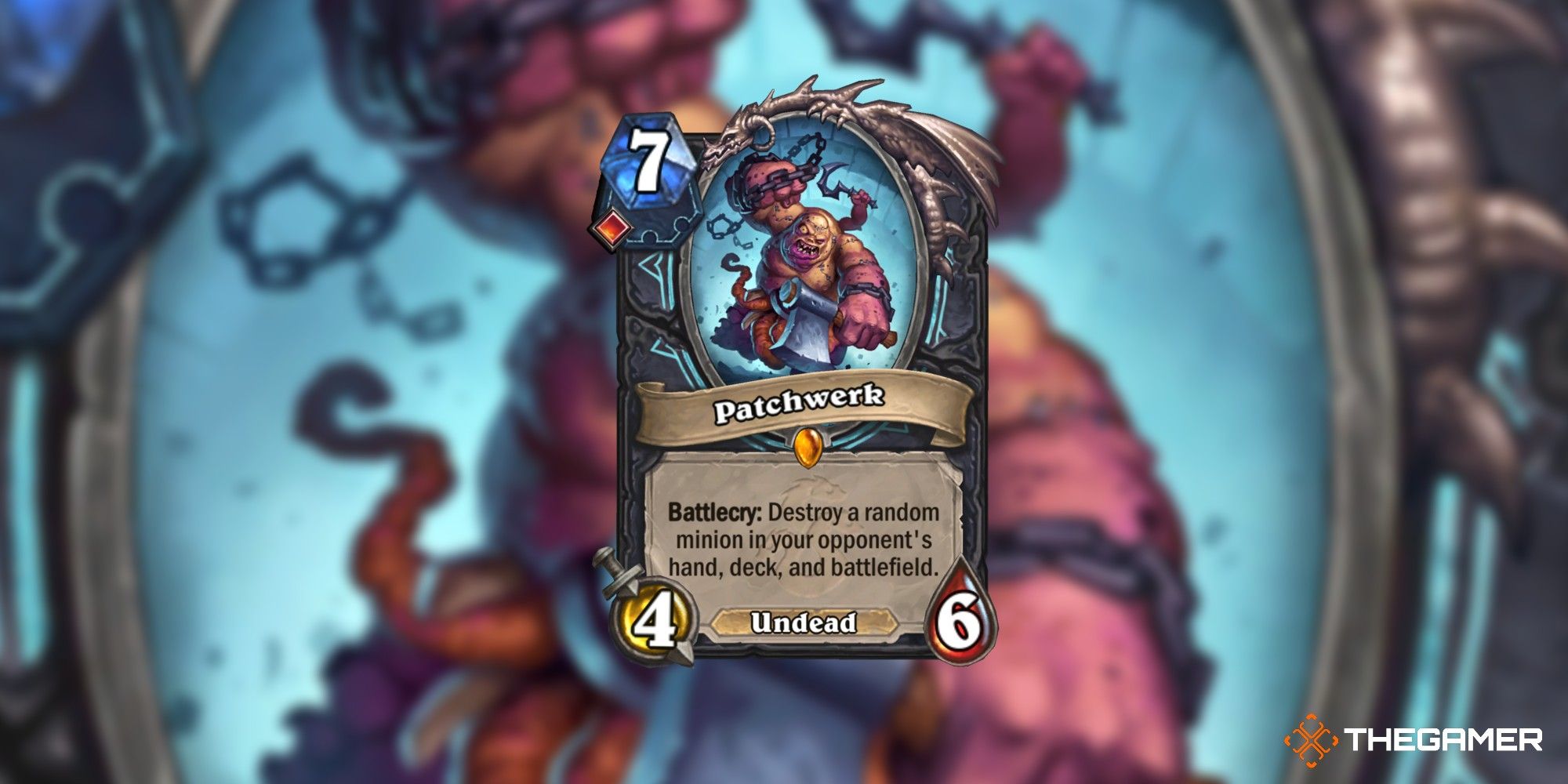 Patchwerk is the standout card for Death Knight across all Rune decks. It's destructive. It's almost over-the-top. When you throw this down on to the board, you've got a chance to halter your opponent's momentum with a crucial board clear, ruin their next move with deleting a card from their hand, and preventing further card synergies by destroying a card in their deck.

On top of all that, Patchwerk is also a one Blood rune card, which means it can be snuck into other deck types. We can see this card being played across multiple Death Knight decks. 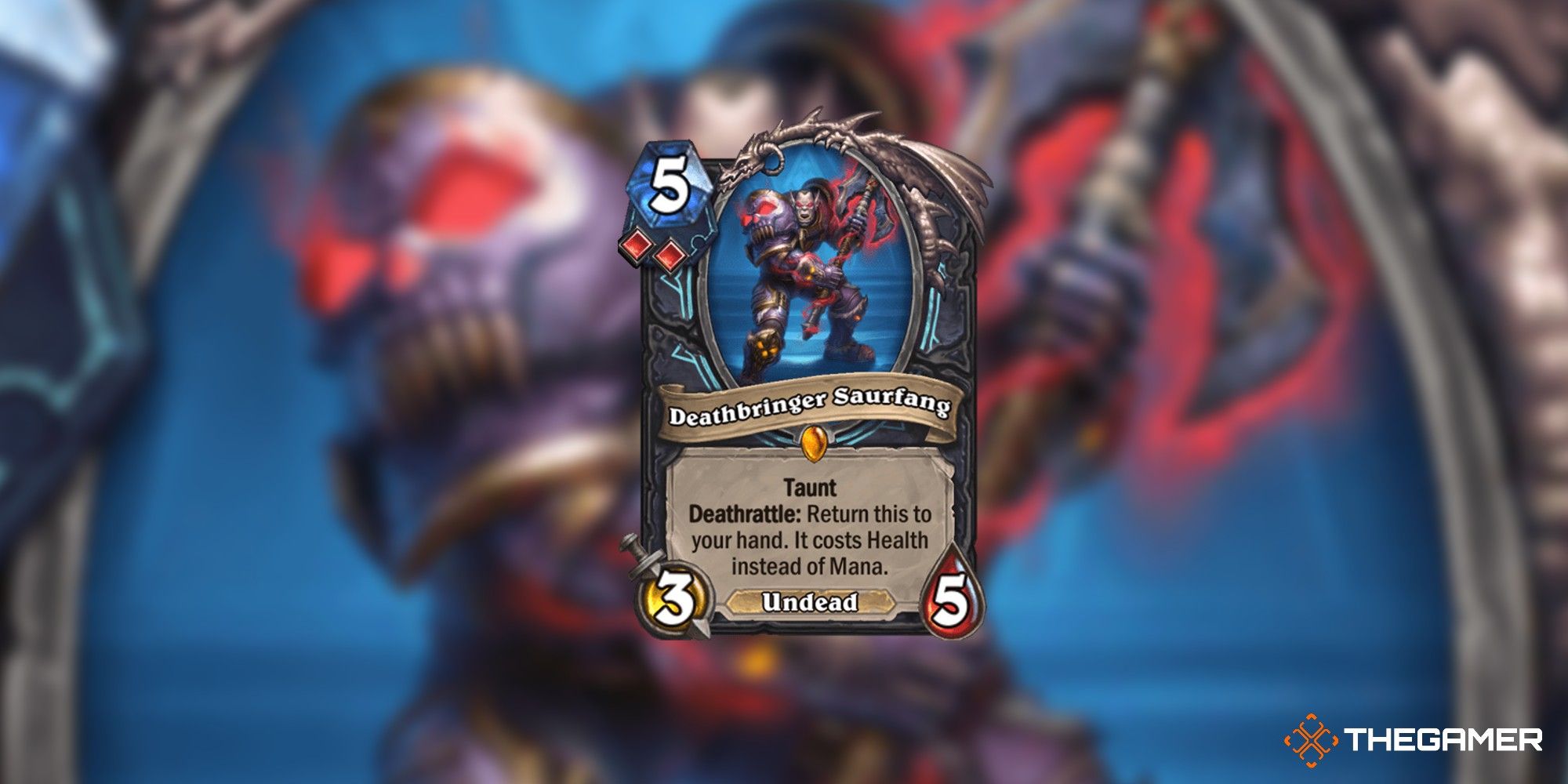 Deathbringer Saurfang is tempo incarnate. At its base stats, a 3/5 for five mana, it isn't outstanding. However, being able to play that same minion again instantly for health rather than mana gives you a huge power surge on the following turns.

The Taunt really helps here, as the opponent can't ignore the card and take the three damage hits. Saurfang has to go down, which means it's guaranteed to return to your hand in one or two turns. Really powerful in a fast-paced Blood rune deck.

Tempo is a term that is used in Hearthstone to talk about how quickly you take board advantage over your opponent. Tempo decks are designed around filling the board with powerful minions early on, then closing out the game before the opponent has a chance to get their synergies going. 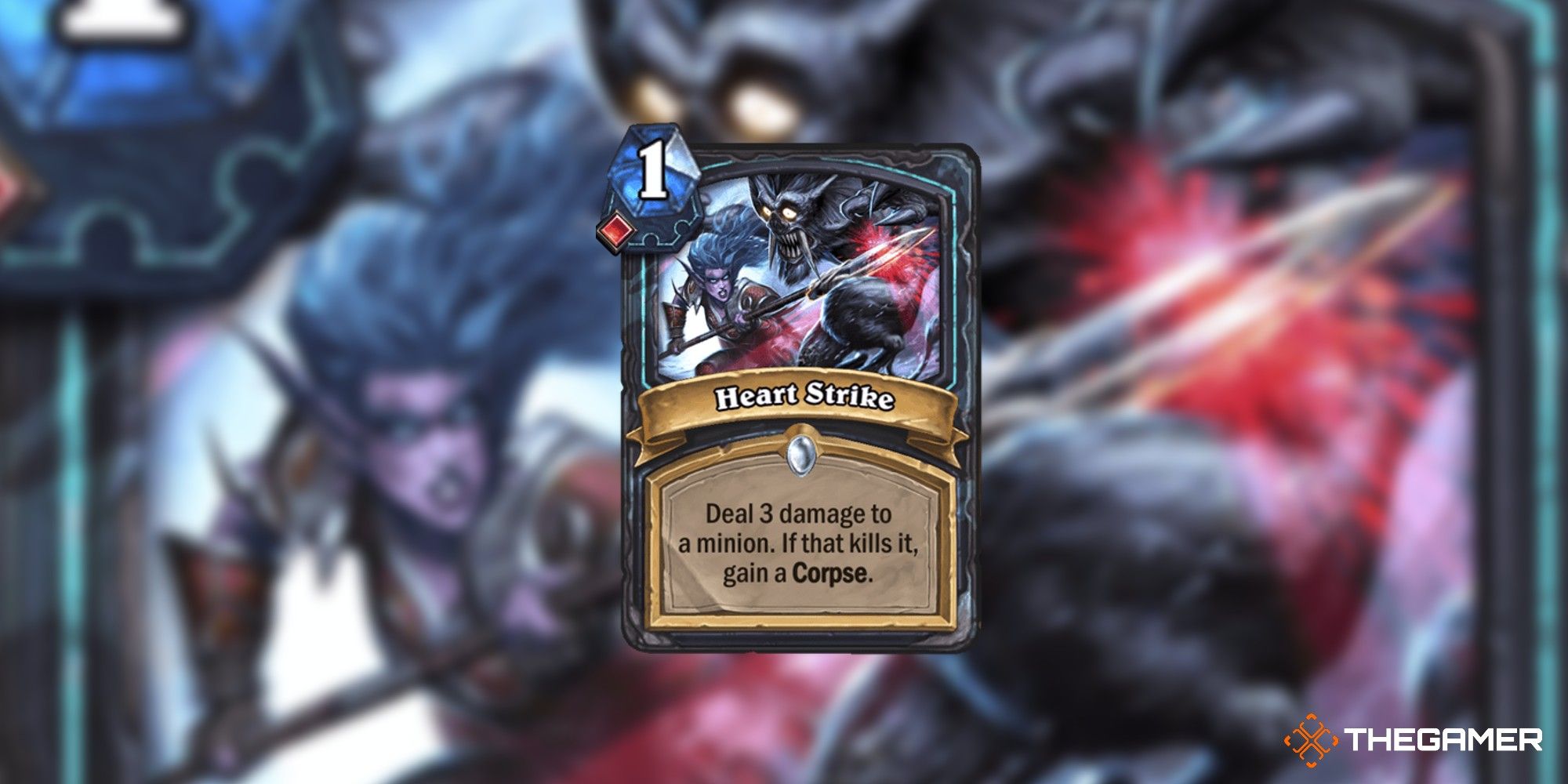 Heart Strike isn't just an excellent targeted spell, it also provides you with an extra Corpse. Corpses are an essential part of deck building with the Death Knight, a new type of "currency" that works alongside mana. All three Death Knight decks (Blood, Frost, and Unholy) can integrate the Corpses mechanic into their deck.

Heart Strike is also a one Blood rune card, which means it can fit into either of the other deck types. If you want to get corpses and build deck synergy around corpses, Heart Strike seems like the ideal pickup. 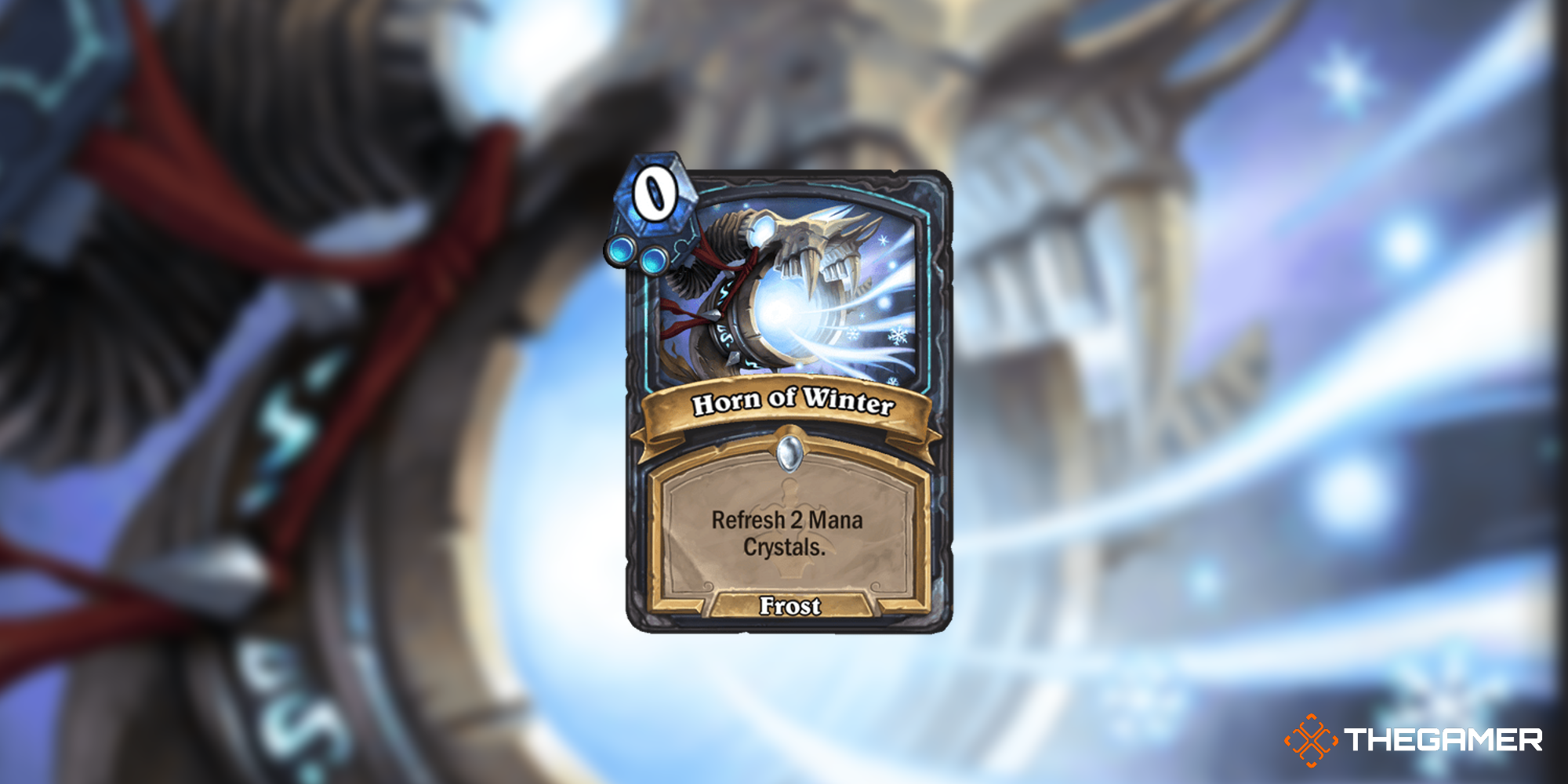 Ah, Innervate. The old Druid classic that regenerates a single mana crystal for zero cost and saw play in pretty much every combo Druid deck of all time. Introducing Horn Of Winter, the new Death Knight card that refreshes two mana crystals for zero cost.

Not only does it provide fantastic tempo in the game, letting you get out a powerful card like Overseer Frigidara or Frostwyrm's Fury early, it's also a Frost spell. This is a new Spell type introduced with Death Knight, and there are multiple methods to draw and activate Frost spells. An all-round brilliant card, this one. 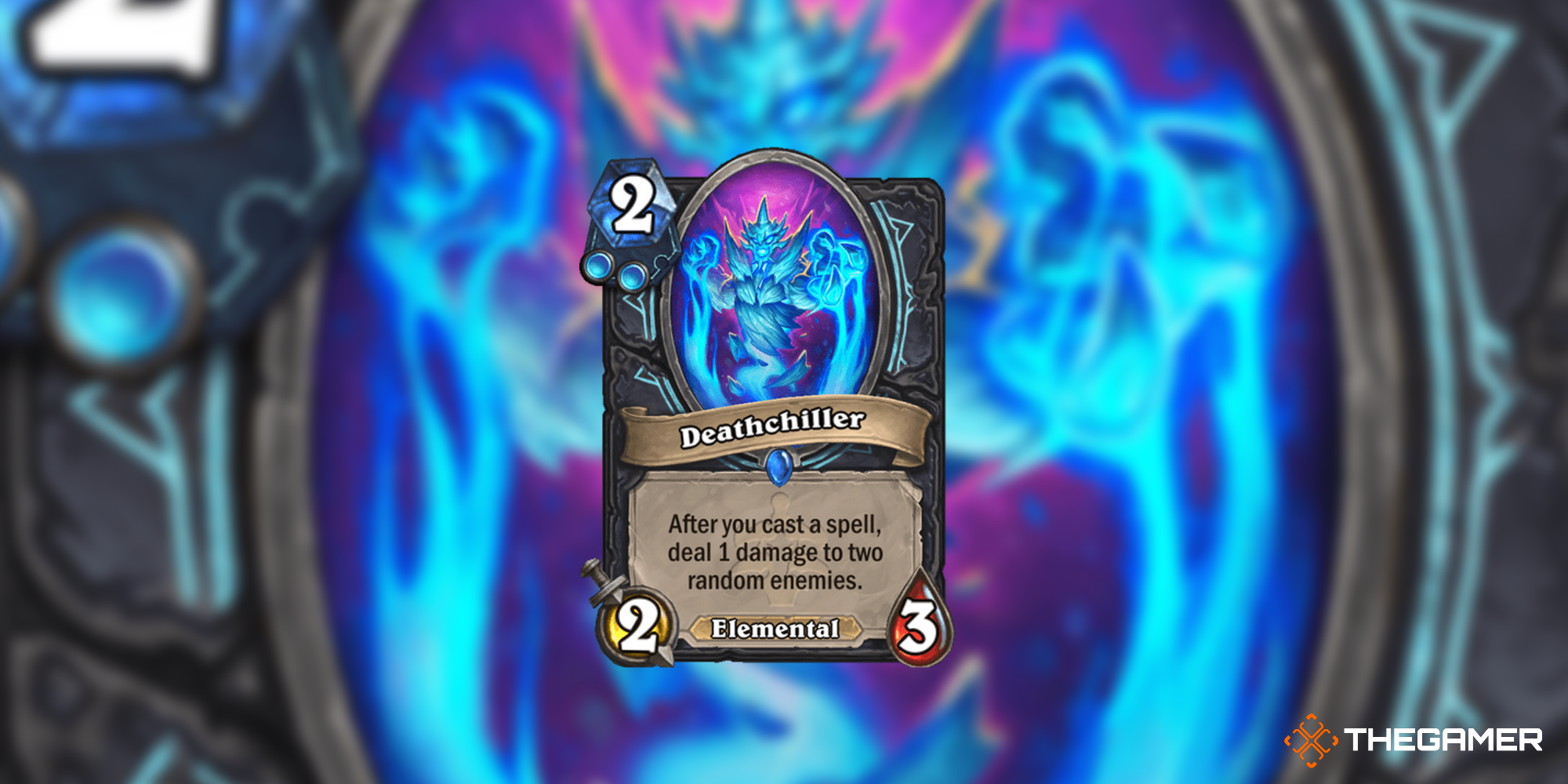 Following directly on from Horn of Winter, we've got Deathchiller. This early drop will deal one damage to two random enemies, and can be activated by that zero cost Horn of Winter or something like Defrost if you have the corpse ready to activate it.

This is another card that provides so much early game pressure. Your opponent will need to focus this card unless they want to be chipped away as you throw Frost spells around. 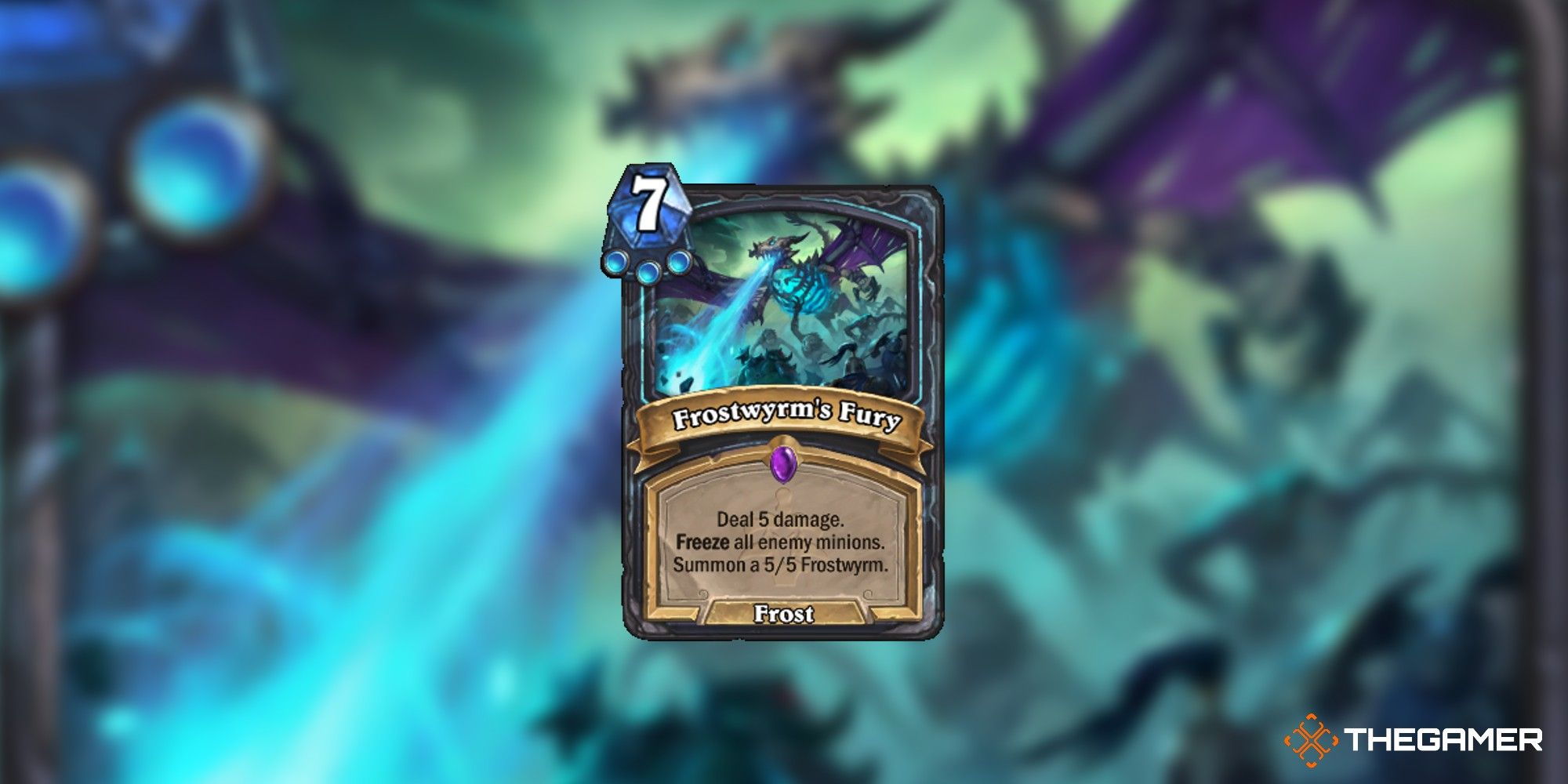 Frostwyrm's Fury might quickly become one of the most infuriating cards to play against when you're facing a Frost Death Knight deck. Paired with Horn of Winter and Lady Deathwhisper you have the potential to actually stack these spells one turn after another, and if the combo pops just right, you'll be able to hit this relatively early in the game.

That means you can freeze the entire opponent's board for multiple turns in a row, and deal damage directly to the opponent or get super favorable trades with the opponent's cards on the battlefield. 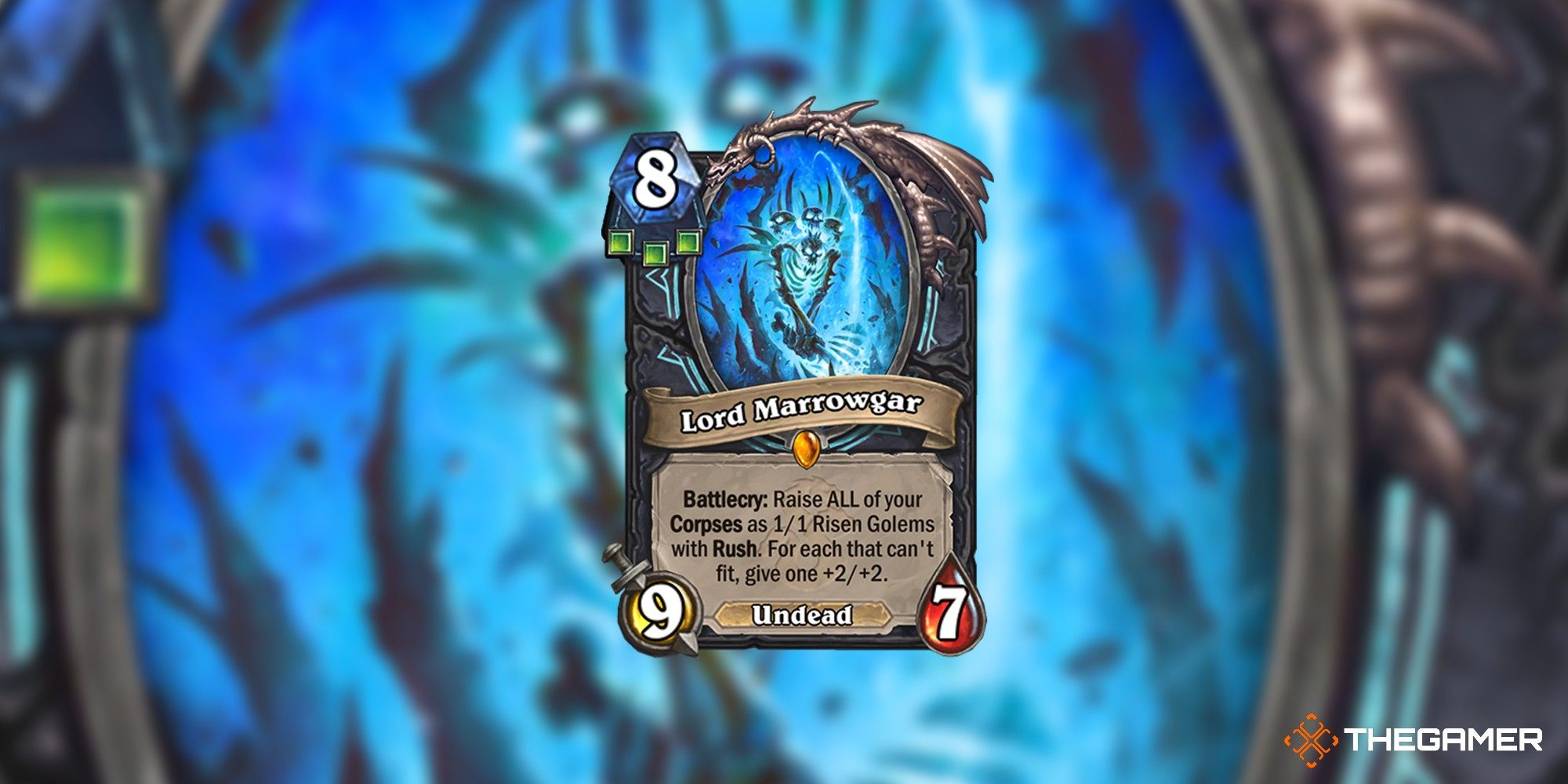 Lord Marrowgar is a massive minion that can be seen as a game-ending play. If you've worked throughout the game to amass as many corpses as you can, using cards like Plagued Grain, cards with reborn, and cards that summon loads of individual minions, then you could drop huge minions, all with rush.

This card is pretty much essential in an Unholy Death Knight deck as the entire purpose of the deck is to generate lots of corpses with this card as the final, knockout blow. 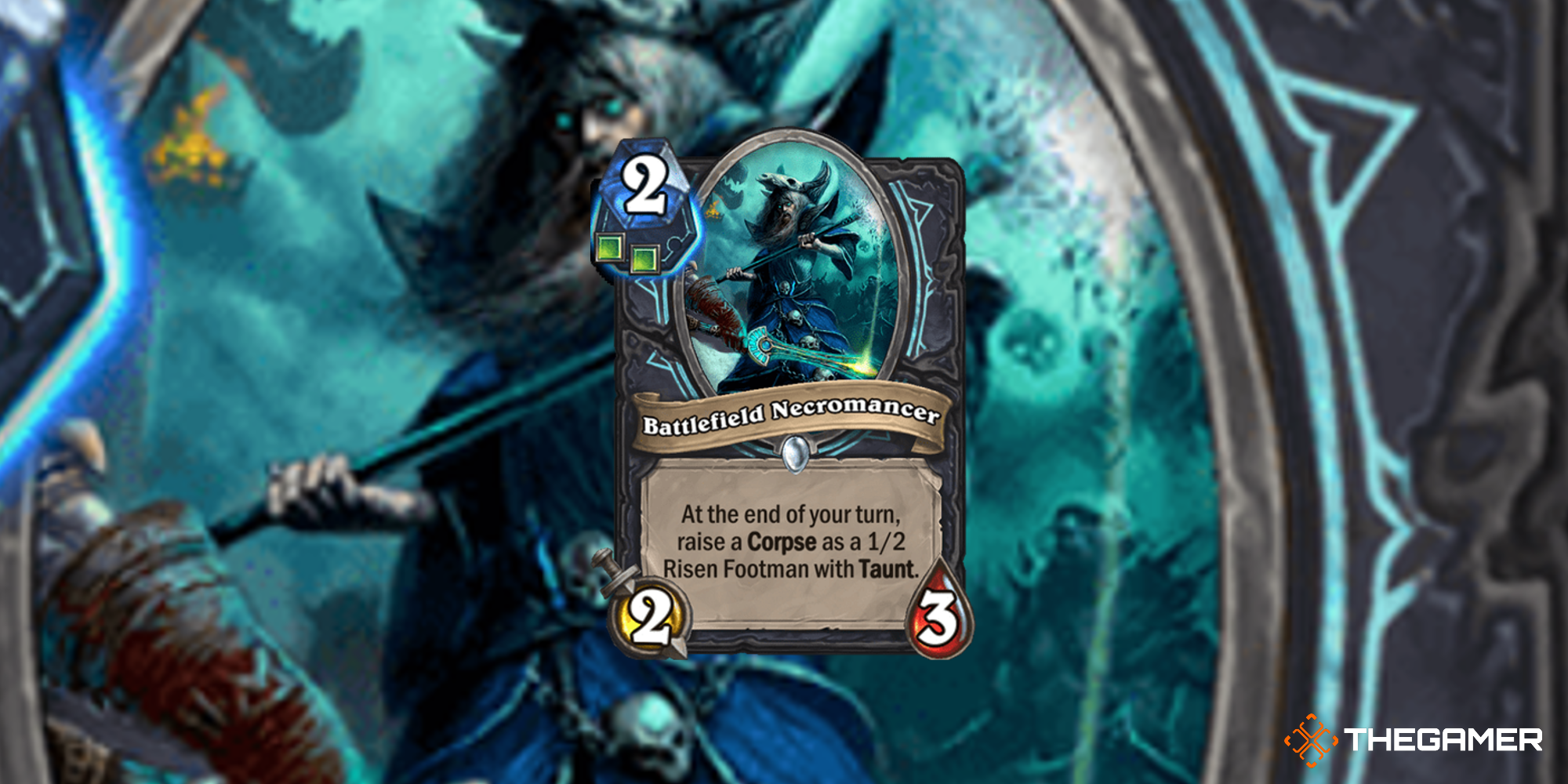 Battlefield Necromancer is a very powerful early game card that can quickly get out of hand. If you've got the early Corpses from a turn one Plagued Grain, you can start generating taunted minions to protect the Necromancer from turn two.

This means you'll have a card that is protected by other taunts, constantly generating more taunt cards, with the dying taunts providing the extra Corpses required to keep the card going. Lots of potential with this card. 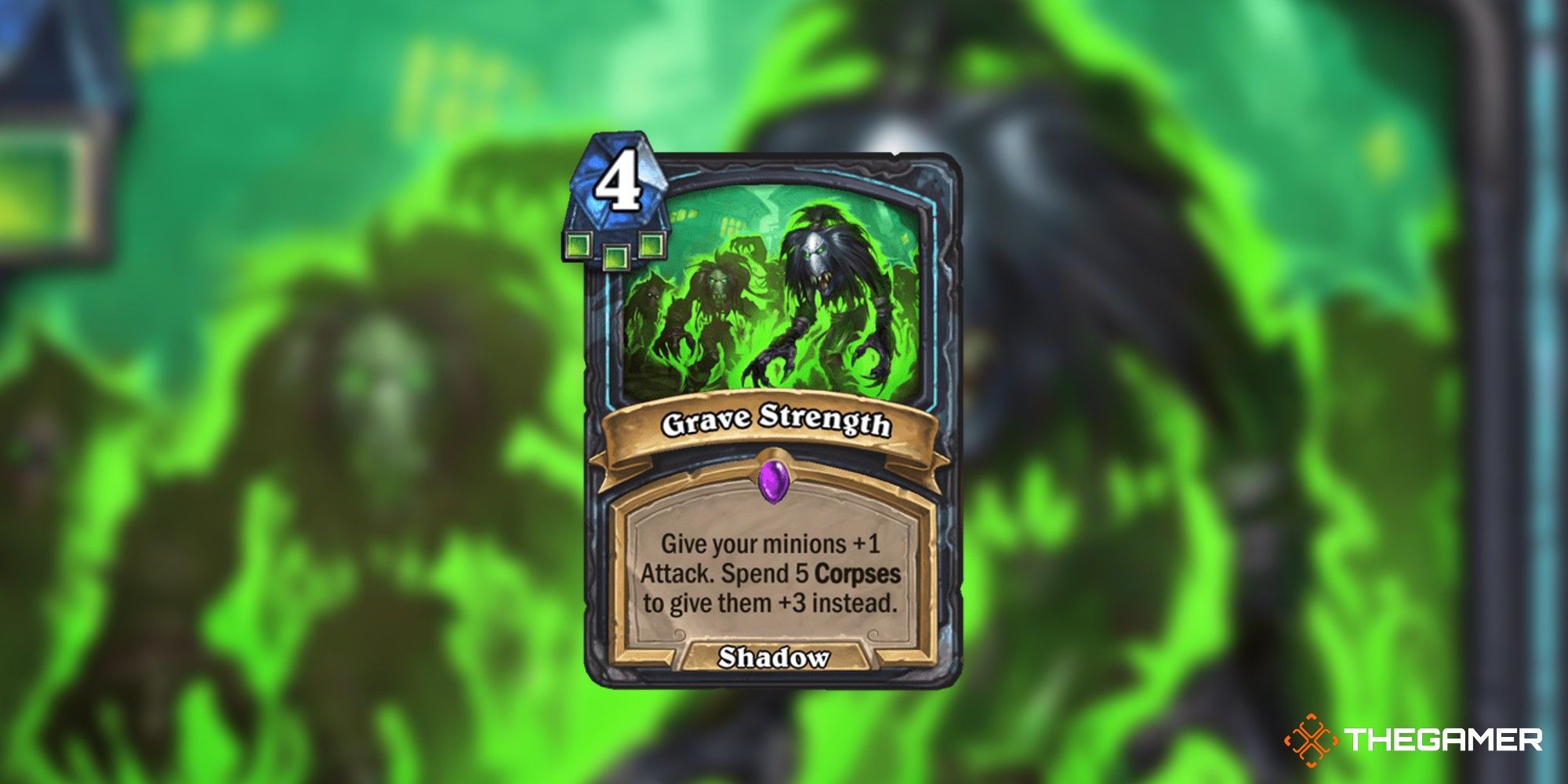 Grave Strength is an excellent tempo card to follow on from Battlefield Necromancer. Imagine you've managed to build a board of 1/2 Taunts and them immediately follow on with a boosted Grave Strength to give them all +4 attack permanently.

Even without spending five Corpses to boost this card, it's a great power play to capitalize on the Unholy Death Knight's early game strength. 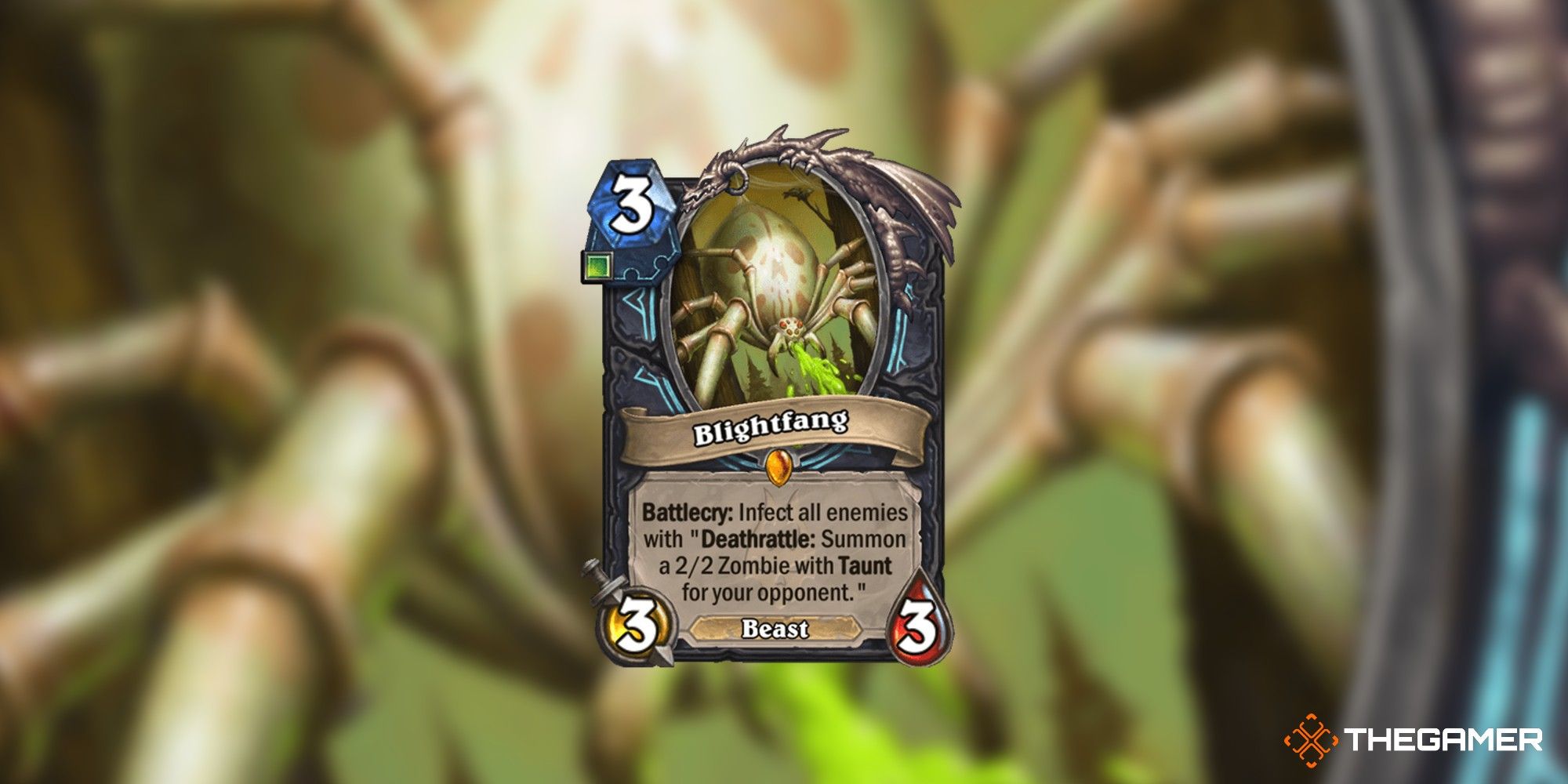 Blightfang is an early game Legendary card that provides a lot of swing in power if you manage to drop it when your opponent has a lot of cards on the battlefield. Each card gets infected, then dies, and is replaced by a 2/2 Zombie with Taunt on your side.

Not only does this provide immediate presence on your board, it also plays into the Death Knight Unholy deck's angle of generating a lot of Corpses to power late-game cards. This feeds into the killing blow of Lord Marrowgar.