The Death Knight class is new to the March of the Lich King expansion pack for Hearthstone. Along with unique cards, there are more mechanics to learn, adding fresh dynamics to the card-battling game. The Corpse mechanic, for instance, is exclusively for the Death Knight class to use, making some cards obsolete without Corpses.

When building your deck, you’ll want to pay close attention to how these Death Knights interact with each other, as well as with the rest of your deck. Though that’s always the case with any class, these cards rely heavily on working together over being functional solo. 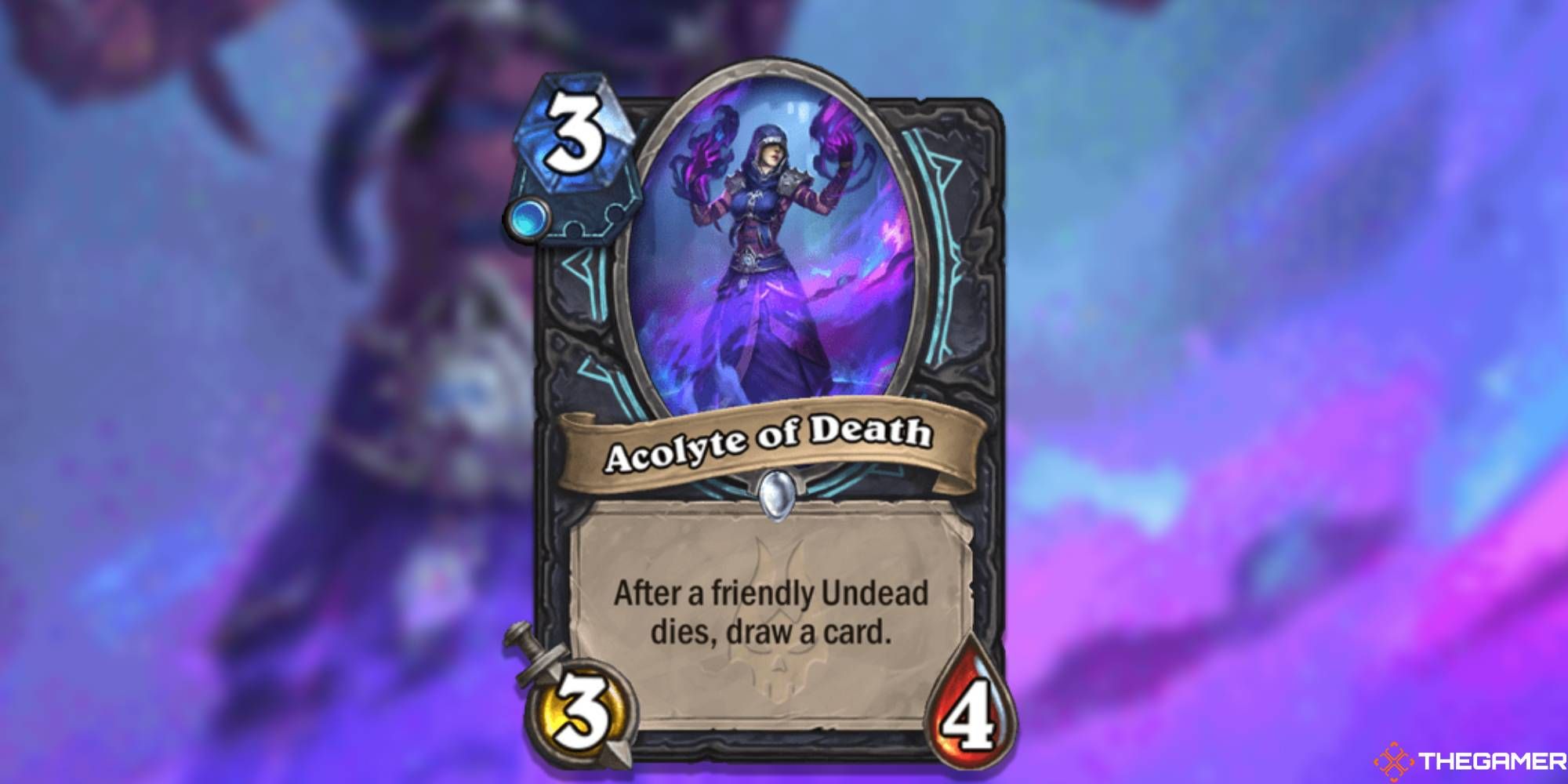 Acolyte of Death is a common minion that will let you draw a card after one of your Undead cards dies in battle. It does have three Attack and four Health stats, and costs only three mana, so you’re most likely going to use this for its power.

Since a high number of cards in the March of the Lich King pack are Undead, you will probably be able to play this after one dies with ease, but it’s really a matter of what else you have in your deck to draw that determines how helpful this minion will actually be for you. 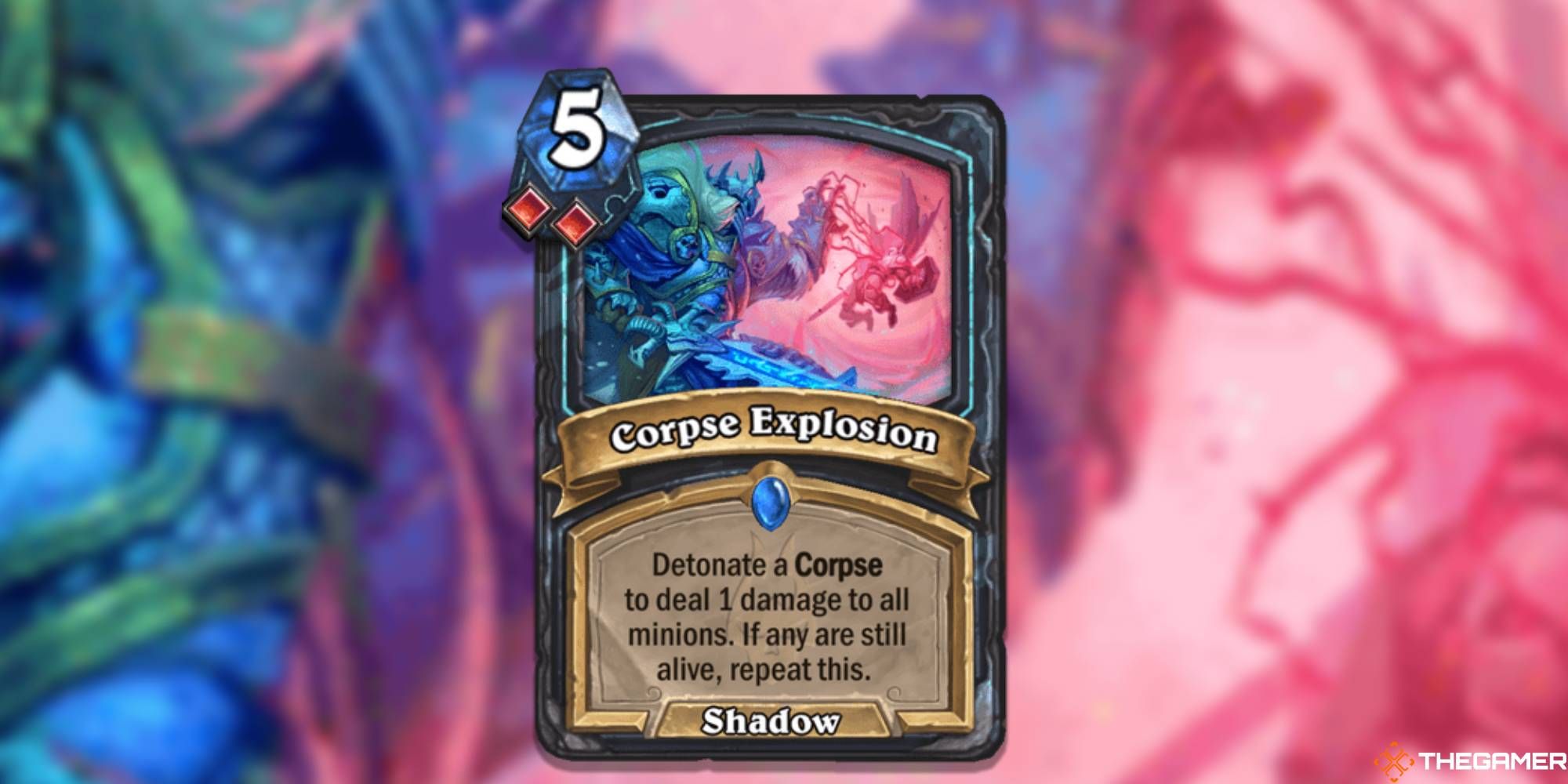 Corpse Explosion is a rare Spell that will detonate a Corpse to inflict one damage against all minions. This will repeat until all active minions are dead. Each time this repeats, however, it detonates another one of your Corpses, so you’ll either want to be sure you have a lot stored up or make sure you’ll kill minions with few Explosions.

Unfortunately, the price you pay in Corpses (and the five mana cost) may be more than it’s worth to use, making this Spell something you’ll need to be very deliberate with how you use in your hand. 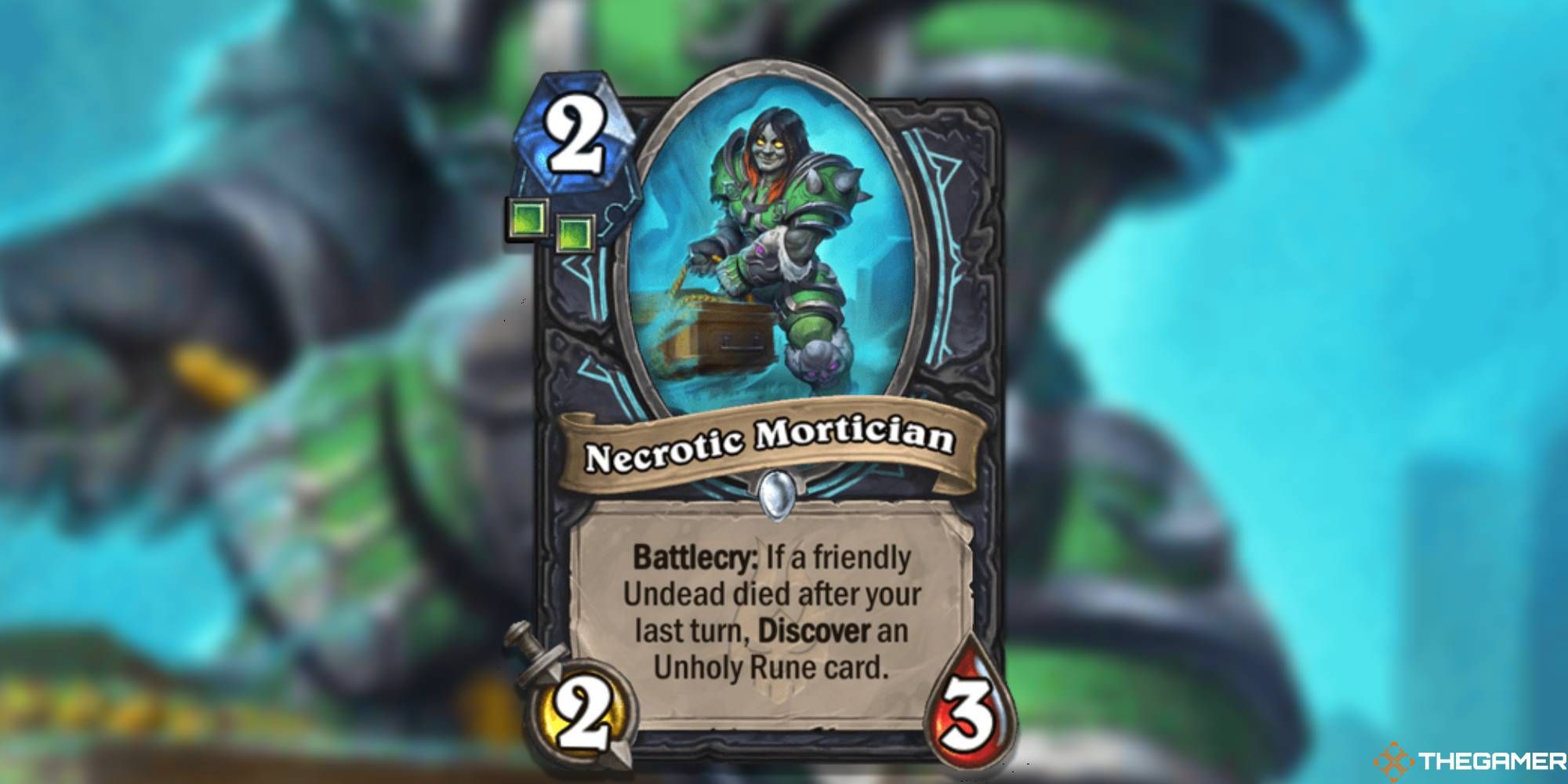 A common minion, Necrotic Mortician allows you to Discover an Unholy Rune if you had an Undead die in the previous turn. With this Unholy Rune you can summon Undead, essentially replacing what you lost.

Aside from its Battlecry, Necrotic Mortician is a low-cost minion with two Attack and three Health stats, so you’ll be able to use it some against your opponent before it’s destroyed. Like Acolyte of Death, you’re likely to have many Undead, so you won’t be hard-pressed to find a time to play this card. 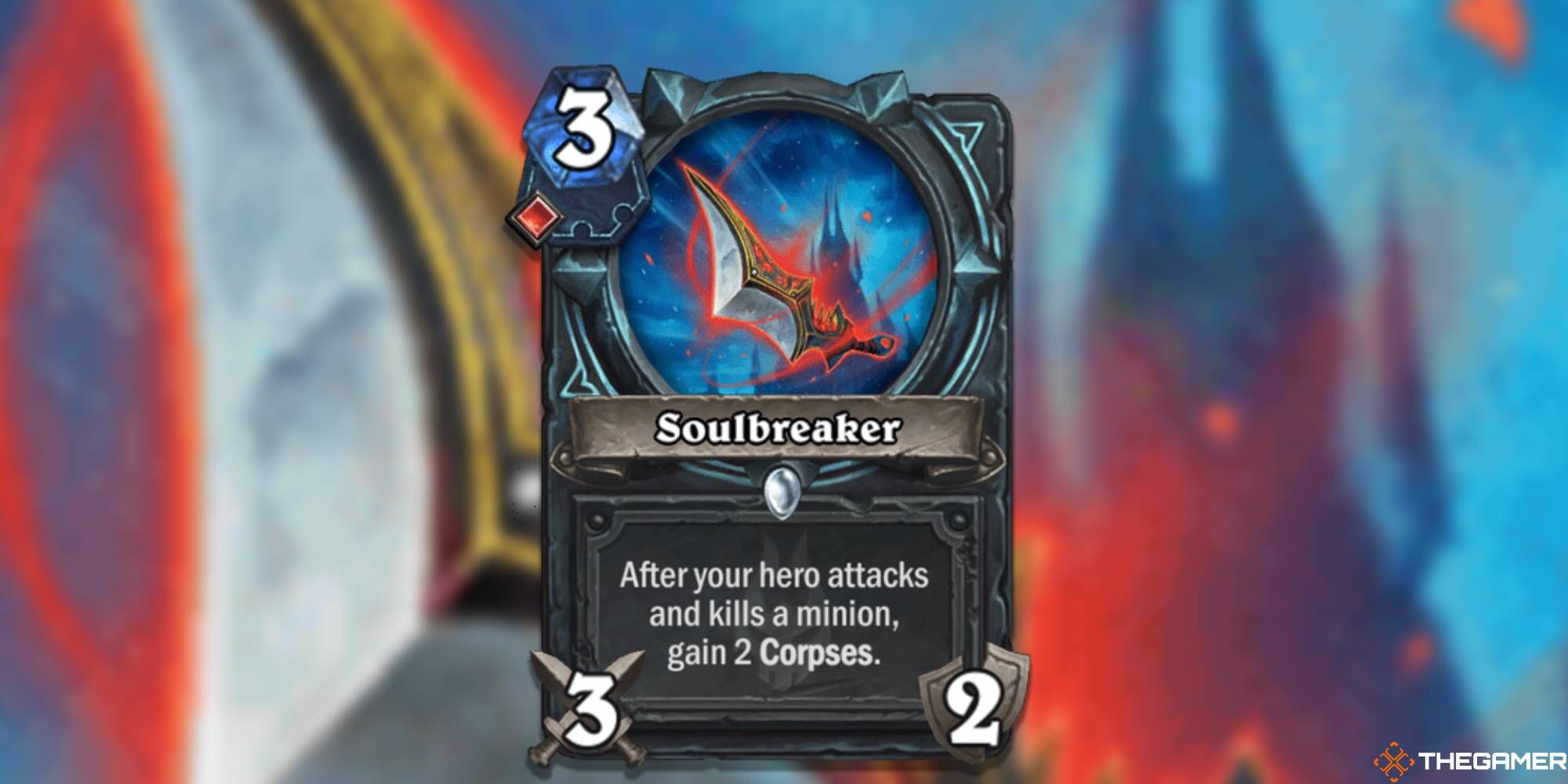 Soulbreaker is a common weapon with three Attack and two durability stats. After you’ve equipped your hero with this, and successfully killed a minion, you’ll get two Corpses in return. Since a few of the Death Knight cards require Corpses to function, the more you can collect, the better.

You could, for example, give your hero Soulbreaker, gain the Corpses, and then cast Acolyte of Death using them to kill off all other minions. 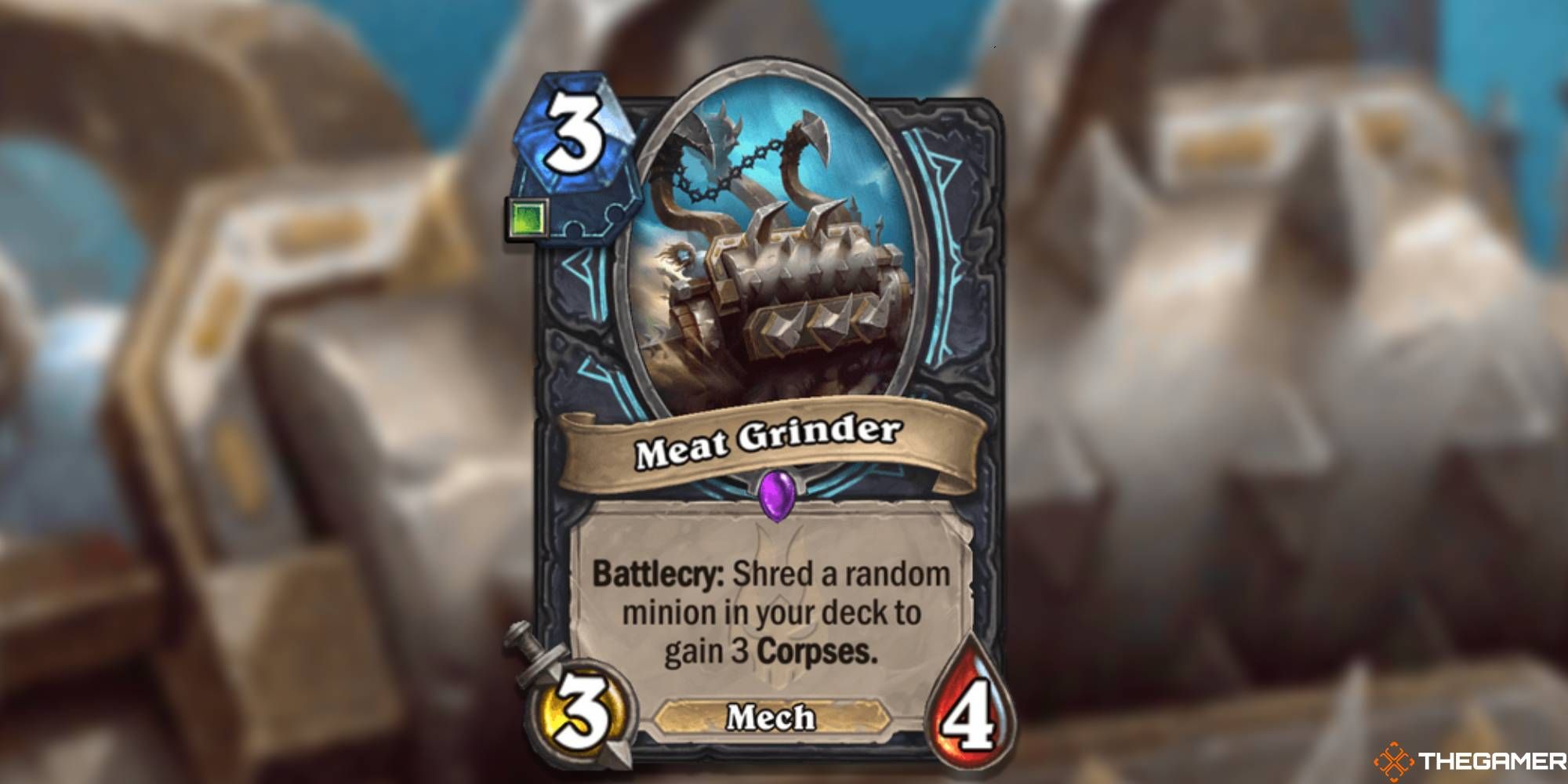 Meat Grinder is an epic minion that has you forfeit one of your minions in your deck in exchange for three Corpses. While it’s never great to have to give up any of your cards, especially one you haven’t even deployed from your deck yet, the gain will make the rest of your Death Knights more viable.

Meat Grinder also has 3/4 stats, so it will provide some Attack damage while in play, and since it only costs three mana, you’ll be able to play it pretty early in the game. 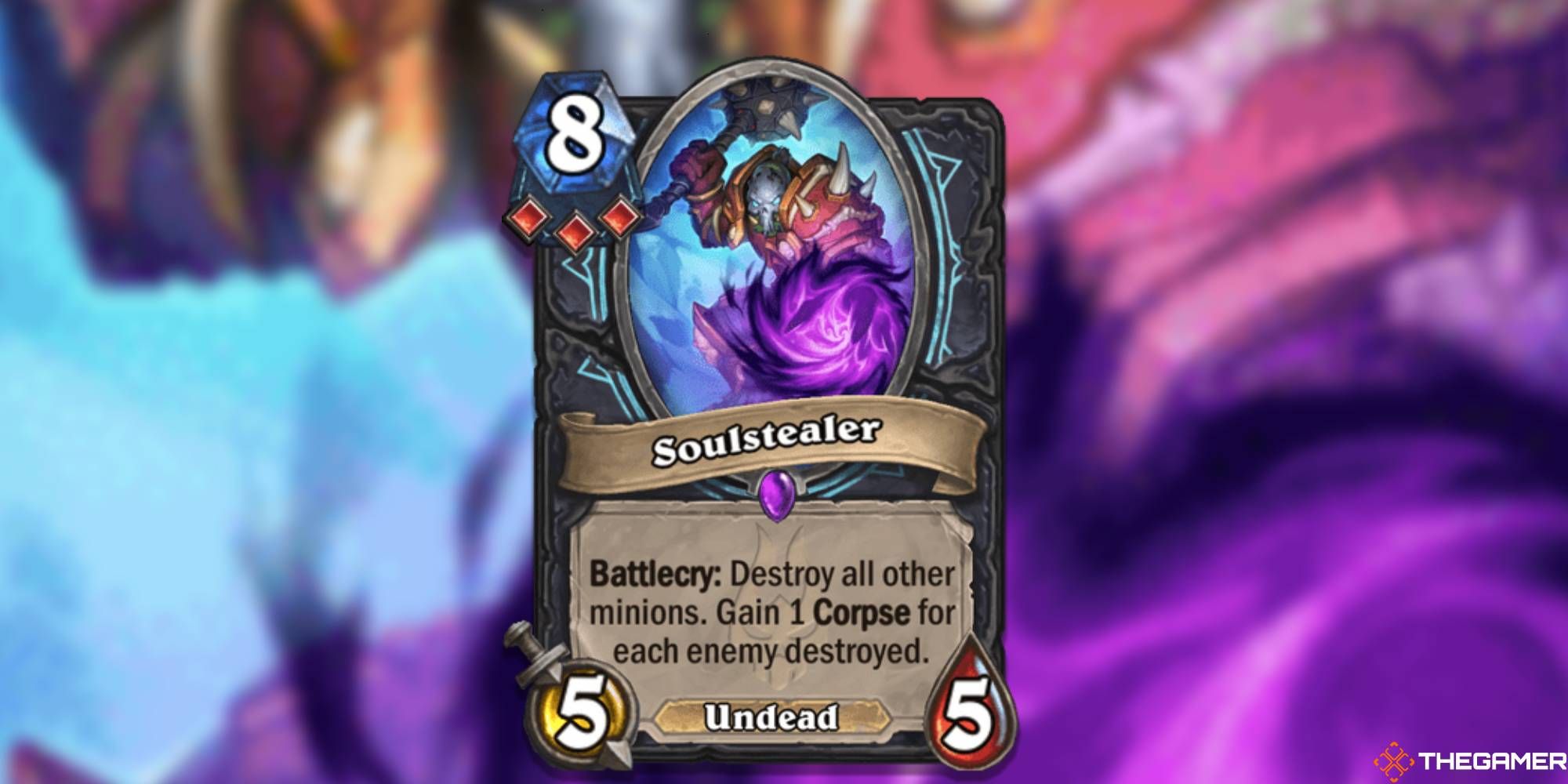 Another epic minion, Soulstealer is much more expensive but has 5/5 stats. Like Acolyte of Death, you’ll destroy all the minions in play when you use this card. You will also gain a Corpse for each and every minion you kill.

The return on using this minion makes the cost more bearable, and with a high demand for Corpses by other Death Knight cards, this can give you more options when playing those other cards. 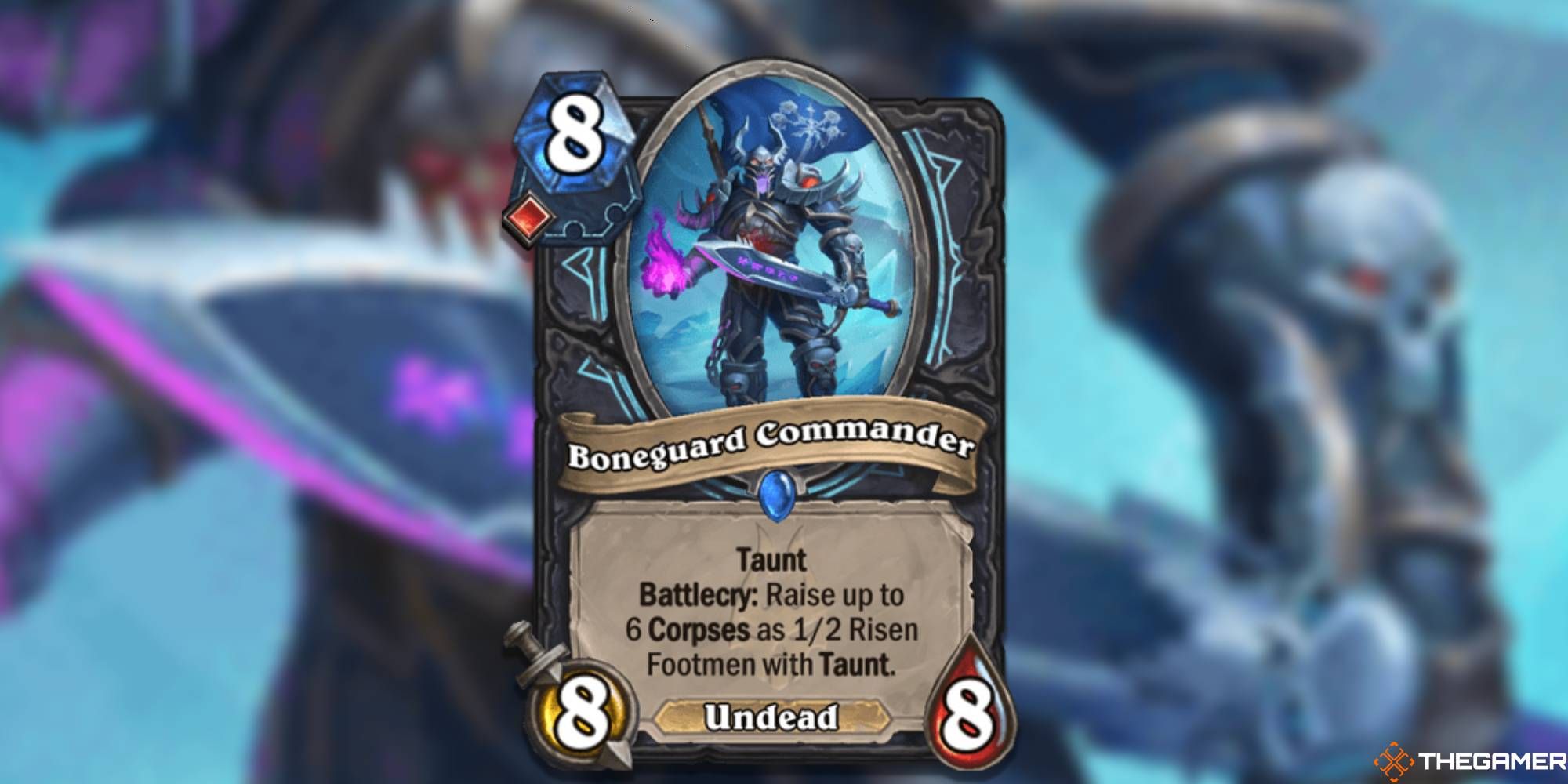 Boneguard Commander is a rare minion with Taunt. It also has 8/8 stats, making it quite valuable on the field both protecting your cards and fighting your opponent’s. This minion will make up to six of your Corpses Risen Footmen with one Attack and two Health stats, all of which will have Taunt.

As long as you’ve saved up Corpses throughout the game, Boneguard Commander can be the equivalent of seven cards on the table with Taunt for the price of eight mana. If you’re low on cards late in the game, this more than makes up for the lack. 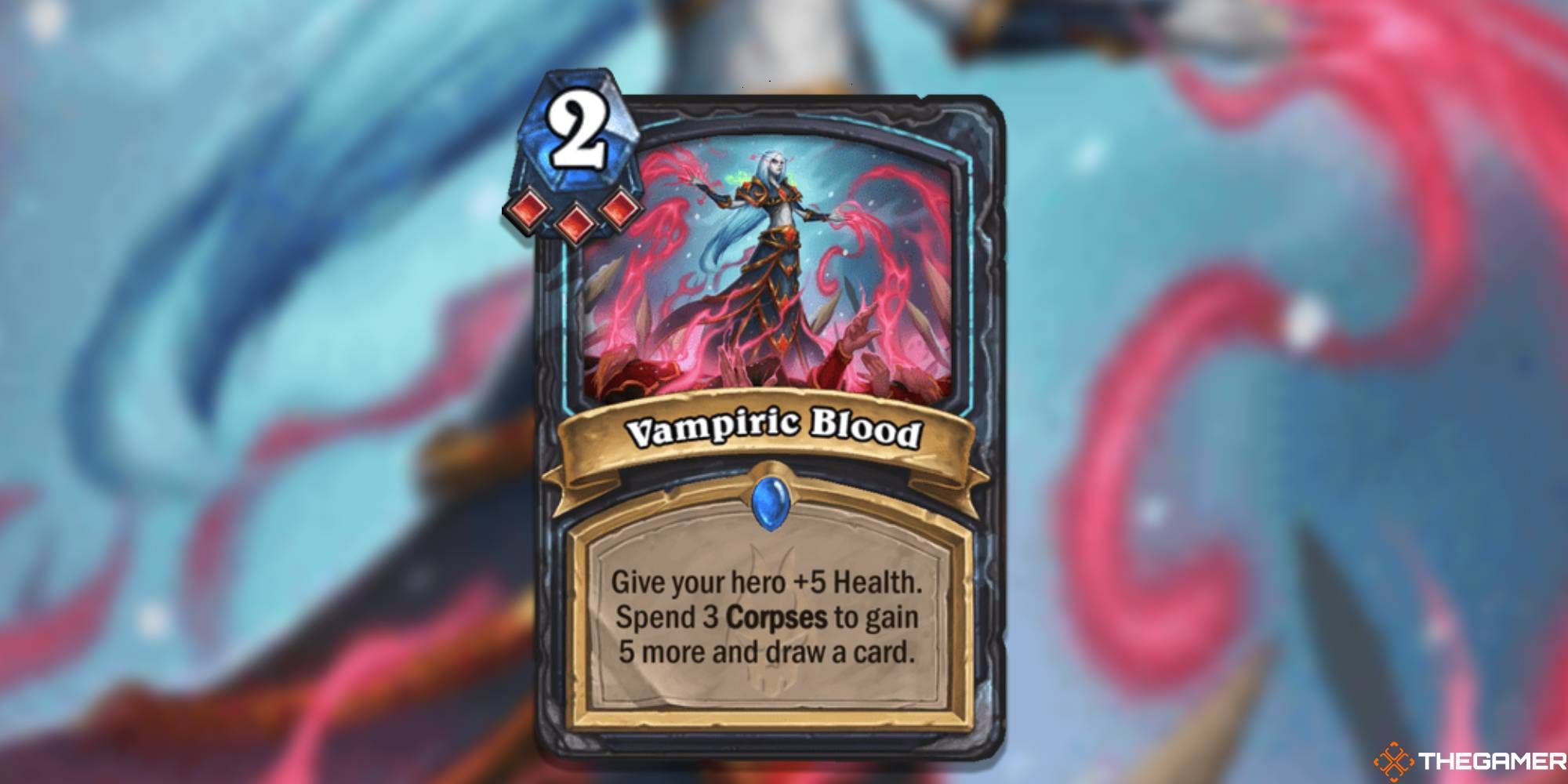 A rare Spell, Vampiric Blood is cheap to cast and will give your hero an extra five Health. If you have the Corpses to spare, you can use three to get five more Health for your hero and draw a card from your deck.

Vampiric Blood can be used whenever you need the Health, giving you more freedom to play it as needed instead of planning. That said, if you wait until later in the game, you could play it alongside Boneguard Commander to max out your Health behind a wall of minions with Taunt for better chances of winning. 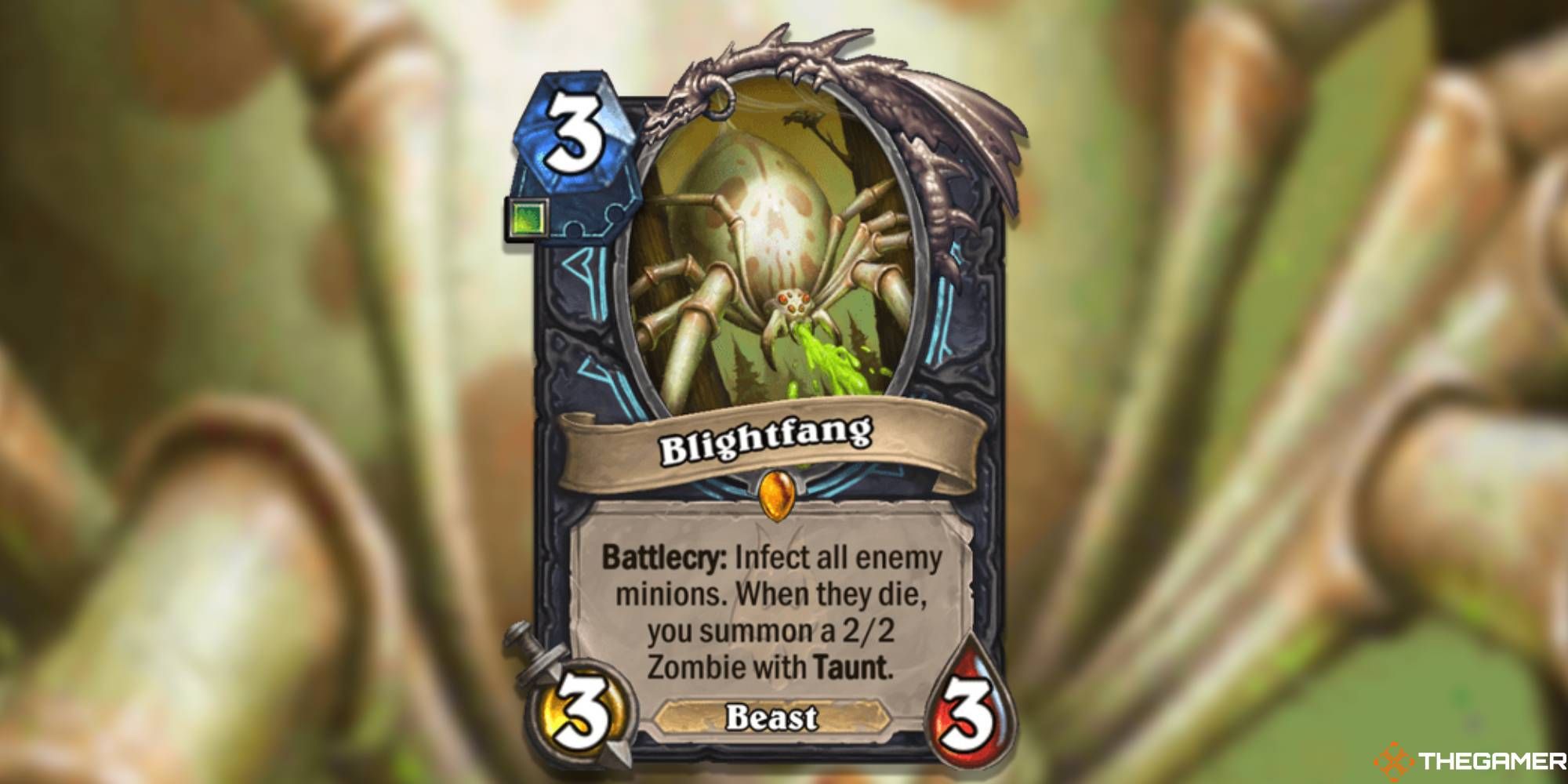 Blightfang is a legendary minion that only costs three mana to play. The Battlecry effect will infect all of your opponent’s minions so that when they die, you’ll gain a Zombie with Taunt and 2/2 stats.

Blightfang is especially nice to have in your deck because you can use it nearly at any point in the game thanks to the low cost, and it doesn’t require you to have Corpses stockpiled to be effective. If you’ve used all your Corpses, or have yet to collect any, Blightfang will work regardless. 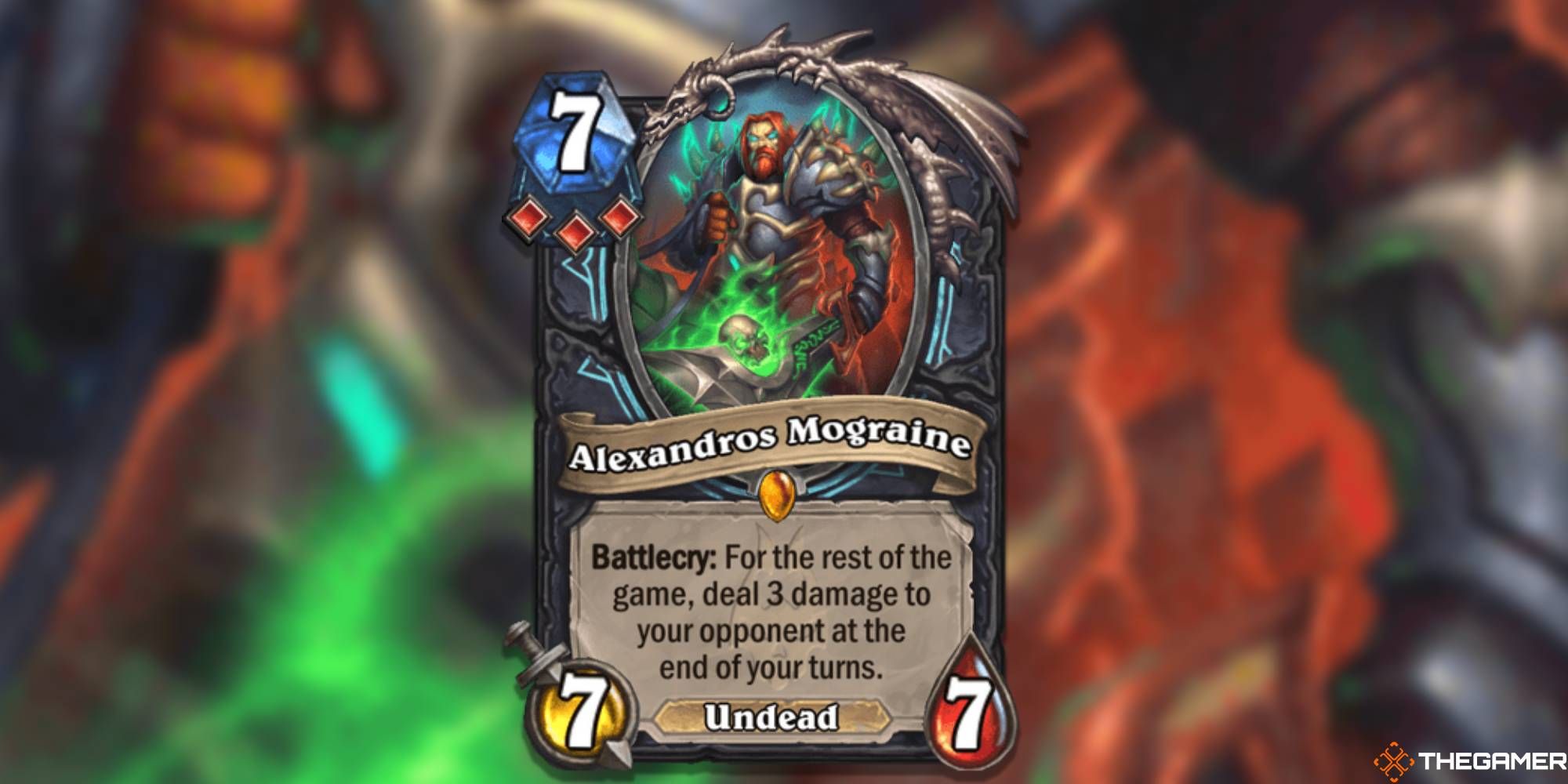 Another legendary minion, Alexandros Mograine will hit your opponent with three damage at the end of every turn for the remainder of the game. This minion will set you back seven mana, so you’ll be using it later in the game, but that will still give you an automatic three hits for however many turns are left.

Alexandros Mograine also has seven Attack and seven Health stats, so while it’s targeting your opponent with three damage, you can also use it against their minions.