Whether you're shooting down other hunters or trying to fend off the horrible denizens of the swamp, you'll need some good weapons to survive Hunt: Showdown. This dark Southern-inspired team survival shooter has quite a learning curve to master.

One way to get a better is by thinking about what weapons you run. Weapons are a valuable part of your loadout, and knowing what to equip is a great way to prepare for any engagement you think you might run into. From the boss you're hunting, to the other hunters you're facing, and even the play style you want, all of this weighs into your weaponry. So, knowing what horrors you'll face in the bayou, let's look at the best weapons in Hunt: Showdown 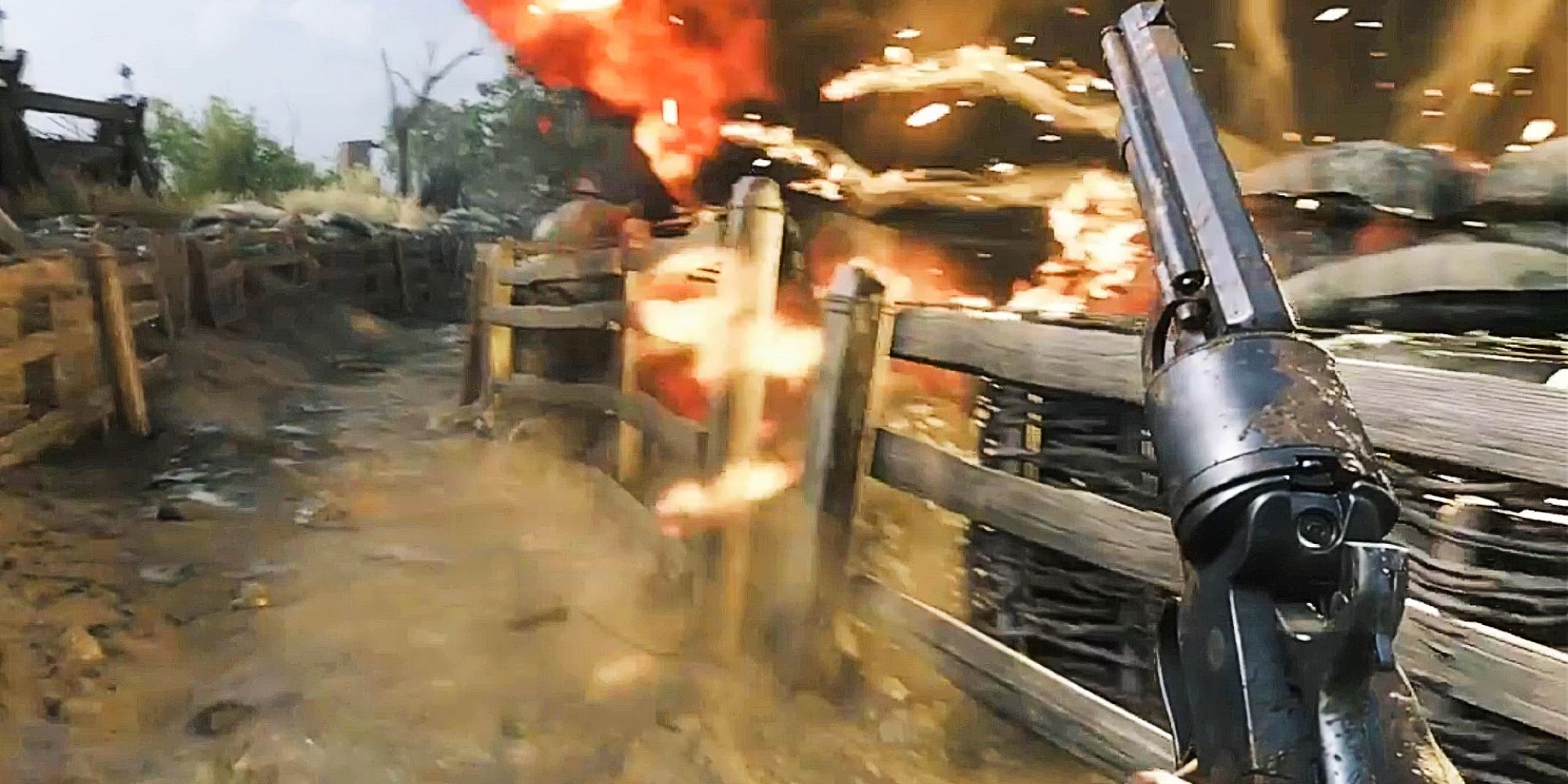 There are plenty of handguns in Hunt: Showdown, and revolvers rank highly among them. One such revolver stands out from the rest, especially thanks to its ammo type. The LeMat revolver may seem like your everyday six-shooter, but it has a nasty surprise to it: it carries a second barrel that you can load a shotgun shell into.

That means when things get up close and personal, you can cock back the other hammer and give your opponent a face full of buckshot This adds a little bit of variety to your handgun, and more damage to boot. 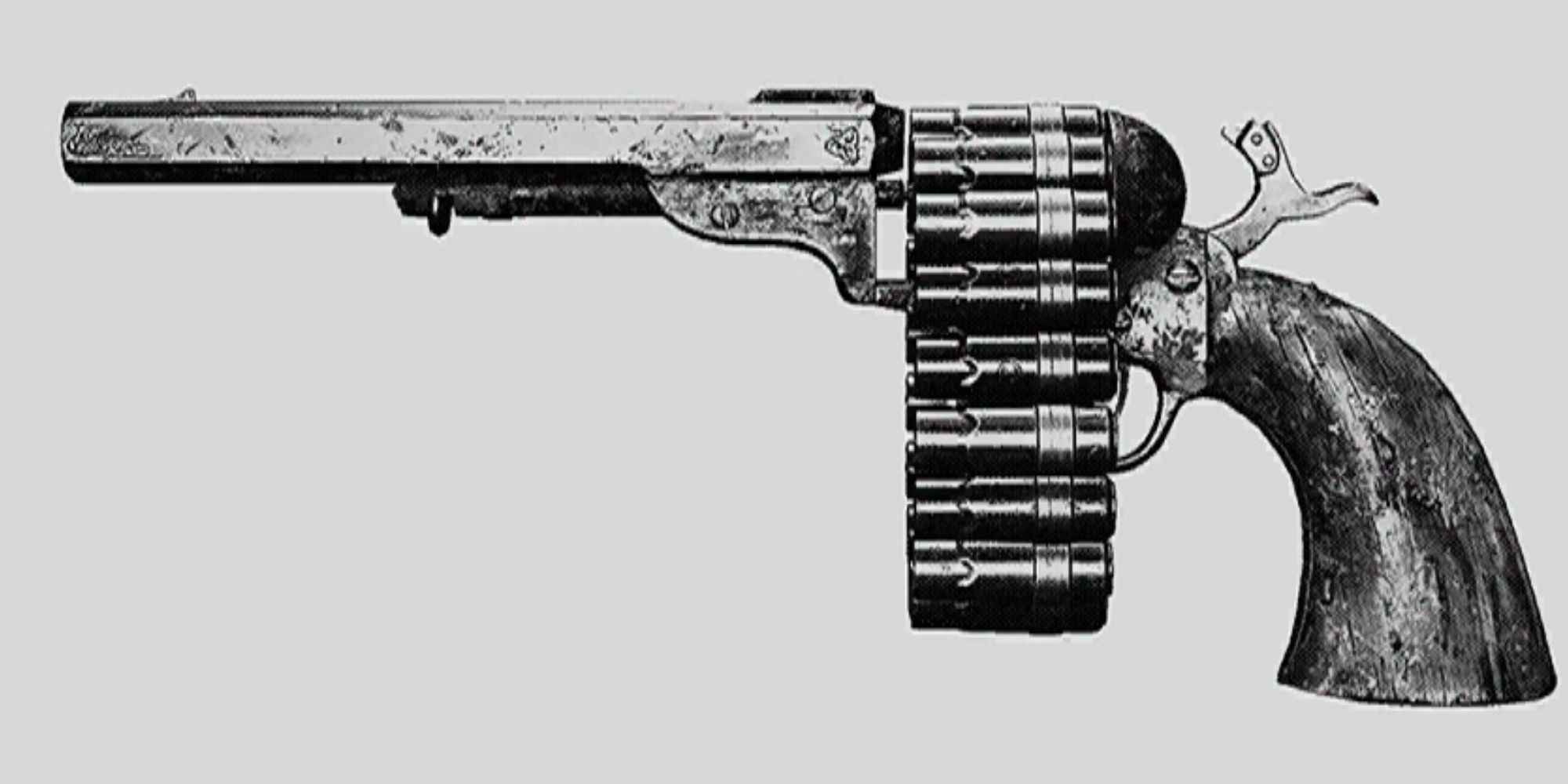 Speaking of revolvers, one of the major drawbacks is that they run out of ammo rather quickly. The Caldwell Conversion Chain Pistol seeks to solve that problem.

A further modified version of the Caldwell Conversion that has been chambered for rifle ammo, this pistol carries a massive 17-shot chain instead of a six-shot cylinder. That means you can be a little less picky with your shots. Combined with the fanning trait or a second Chain Pistol and you can really throw lead at whatever is standing in front of you. 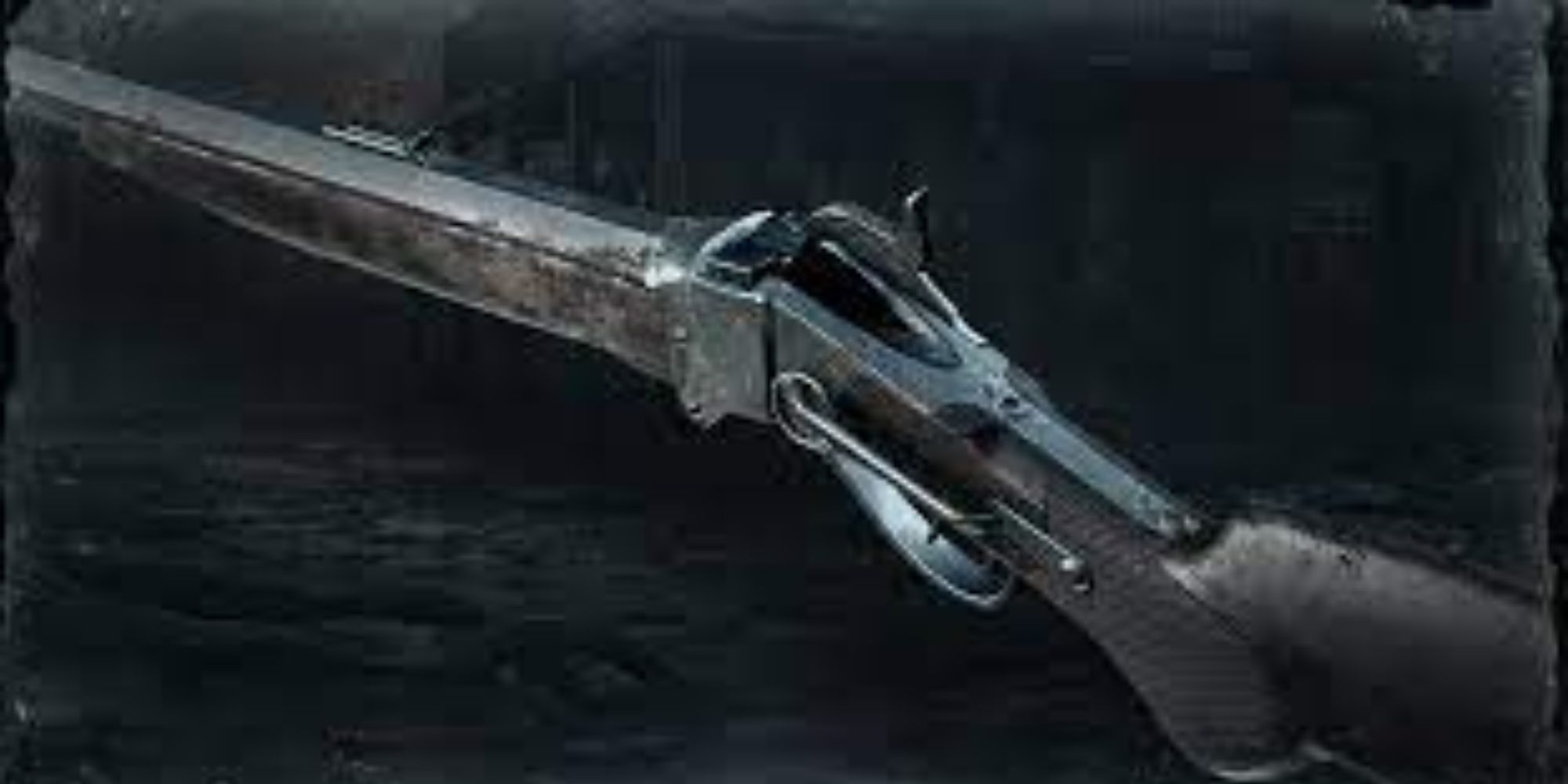 If aimed right, you can do some severe damage to anything you hit. The drawback is that the go-to iron sights are a little bit hard to get used to, and you have only one shot before you need to reload. So, make sure you're picking your timing right, and not running in headfirst. 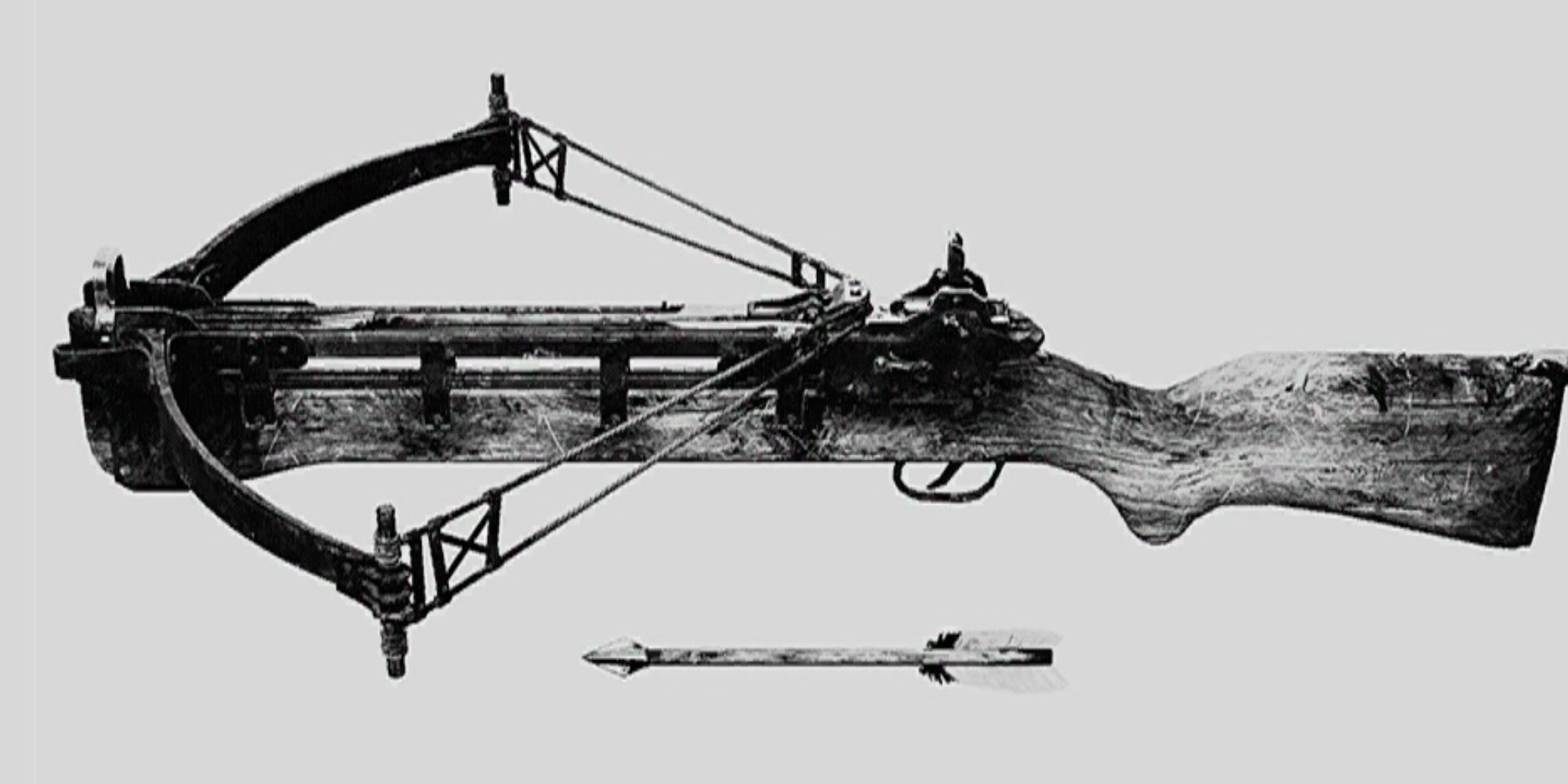 A near-silent option for taking out enemies, the crossbow should not be overlooked for options with more gunpowder behind them.

This is a great option for those who want a more stealthy approach to the game, which isn't a bad idea with all the things that want you dead. The added benefit of this weapon is the variety of bolt types that one can load into the crossbow, from the typical kind to explosive, and even one with a shotgun shell tip. This adds a great amount of versatility, if you prepare properly. 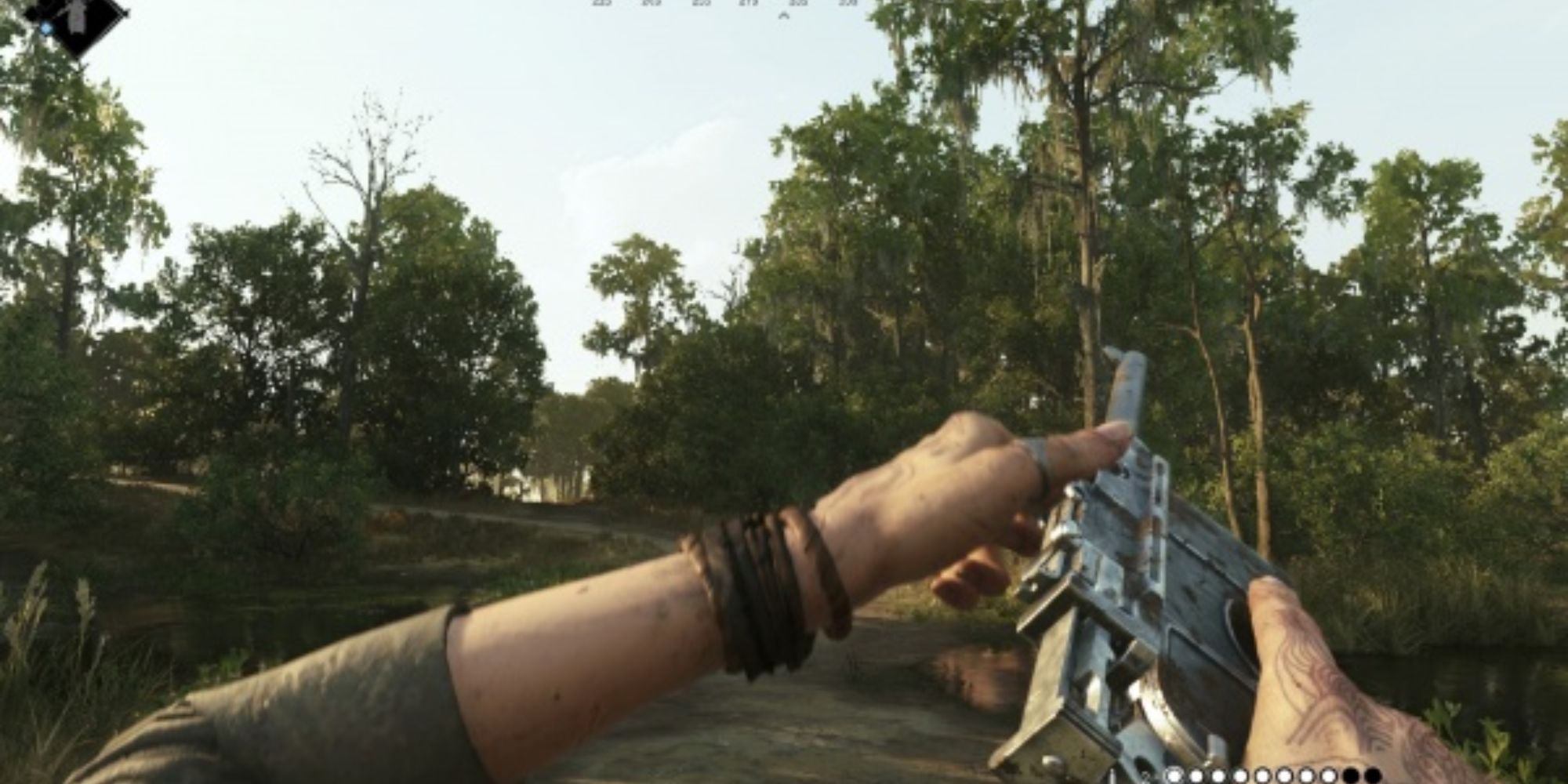 A pistol that for quite a time was the height of the meta. The Dolch pistol is an oddity in Hunt: Showdown for being semi-automatic and clip-fed. Where it is outweighed in damage, it makes up for in ease of use and rate of fire.

A pair of these makes for quite an experience, especially if you're on the receiving end of one in the hands of someone with good aim. Just because it doesn't hit as hard, doesn't mean it should be left alone. 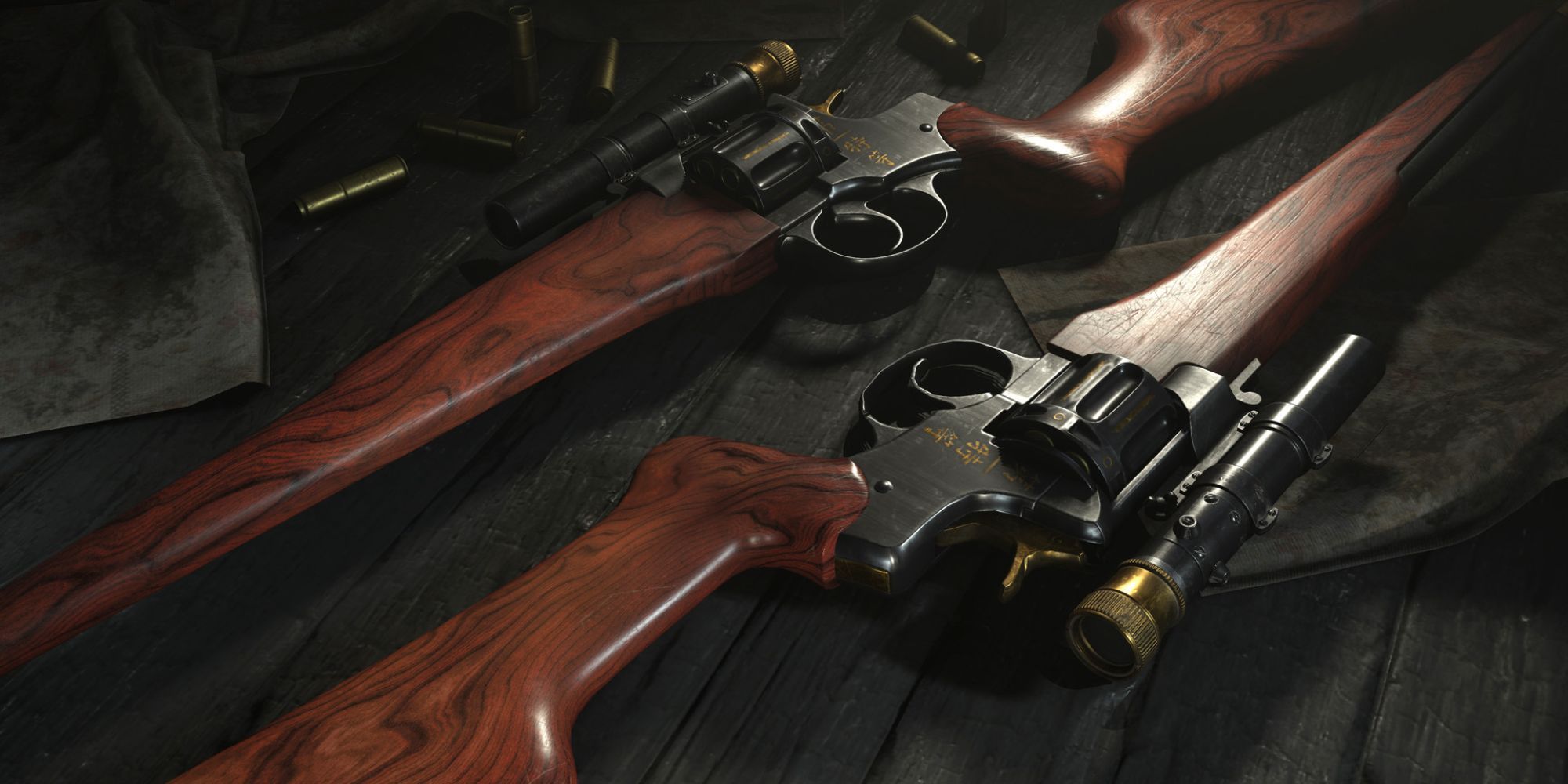 A weird weapon for sure, but what else would you expect from Hunt. This revolver-turned-carbine is a must-have for those who want to master the mid- to long-range encounter.

The low recoil and somewhat quick follow-up shot make this a great choice for those who don't love some of the breech-loading or bolt-action options. The lower damage per shot and six-shot cylinder mean you will need to aim carefully or have someone distract your enemy while you take the occasional reload, but in the hands of someone well-accustomed to this weapon, it can be an absolute boon to the team. 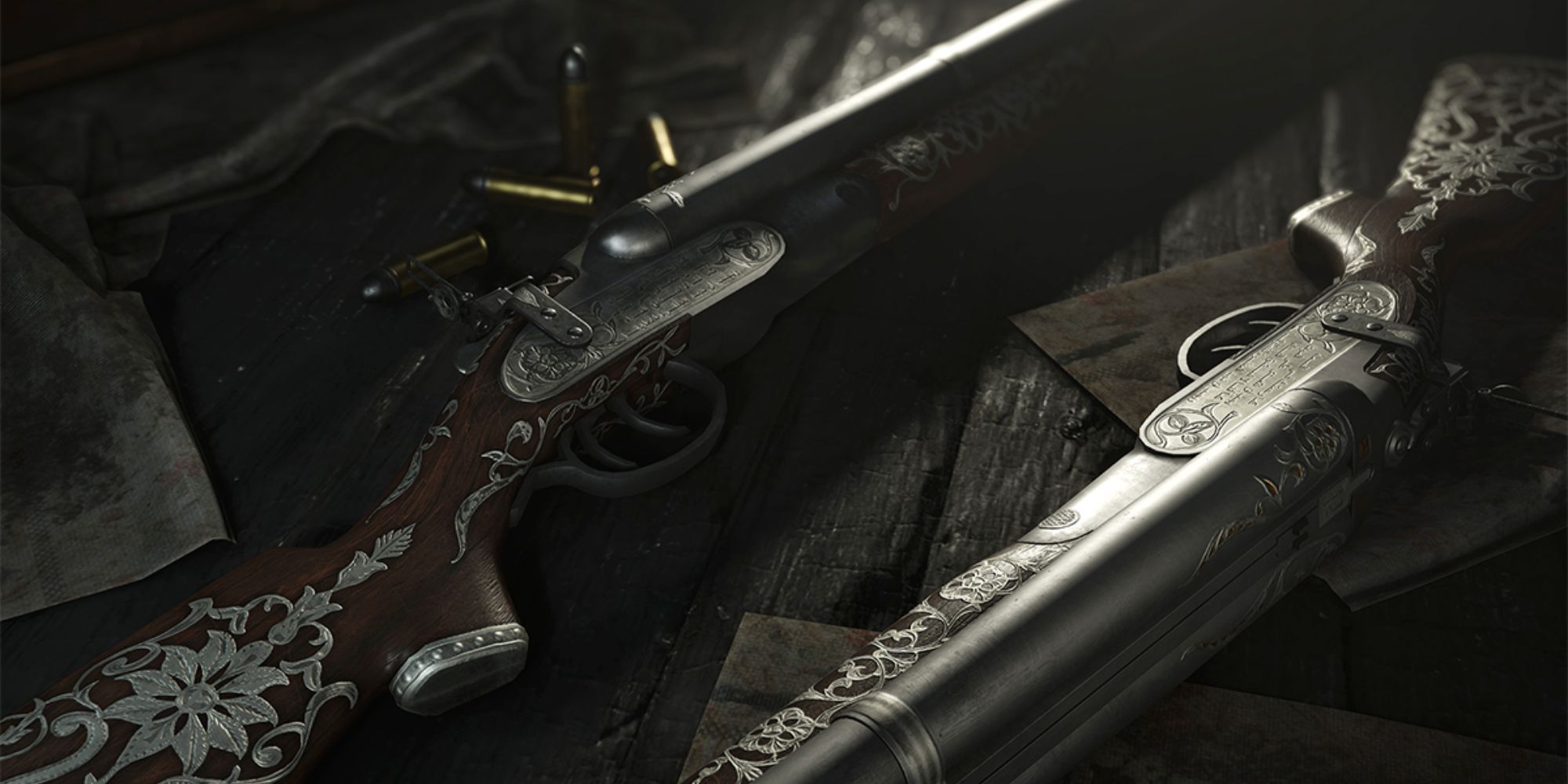 An absolute beast of a rifle. The Nitro Express has some of the highest damage output per hit of any weapon in the game. Most players can recall every time they've been laid out by this weapon by just how quick it was.

The recoil on the Nitro is severe, but a lot of times you shouldn't need a follow-up shot or if you do just that from a handgun is enough. It is only a double barrel and on top of that you can't carry that much ammo in total either, so you really want to save your shots for when you absolutely need them. 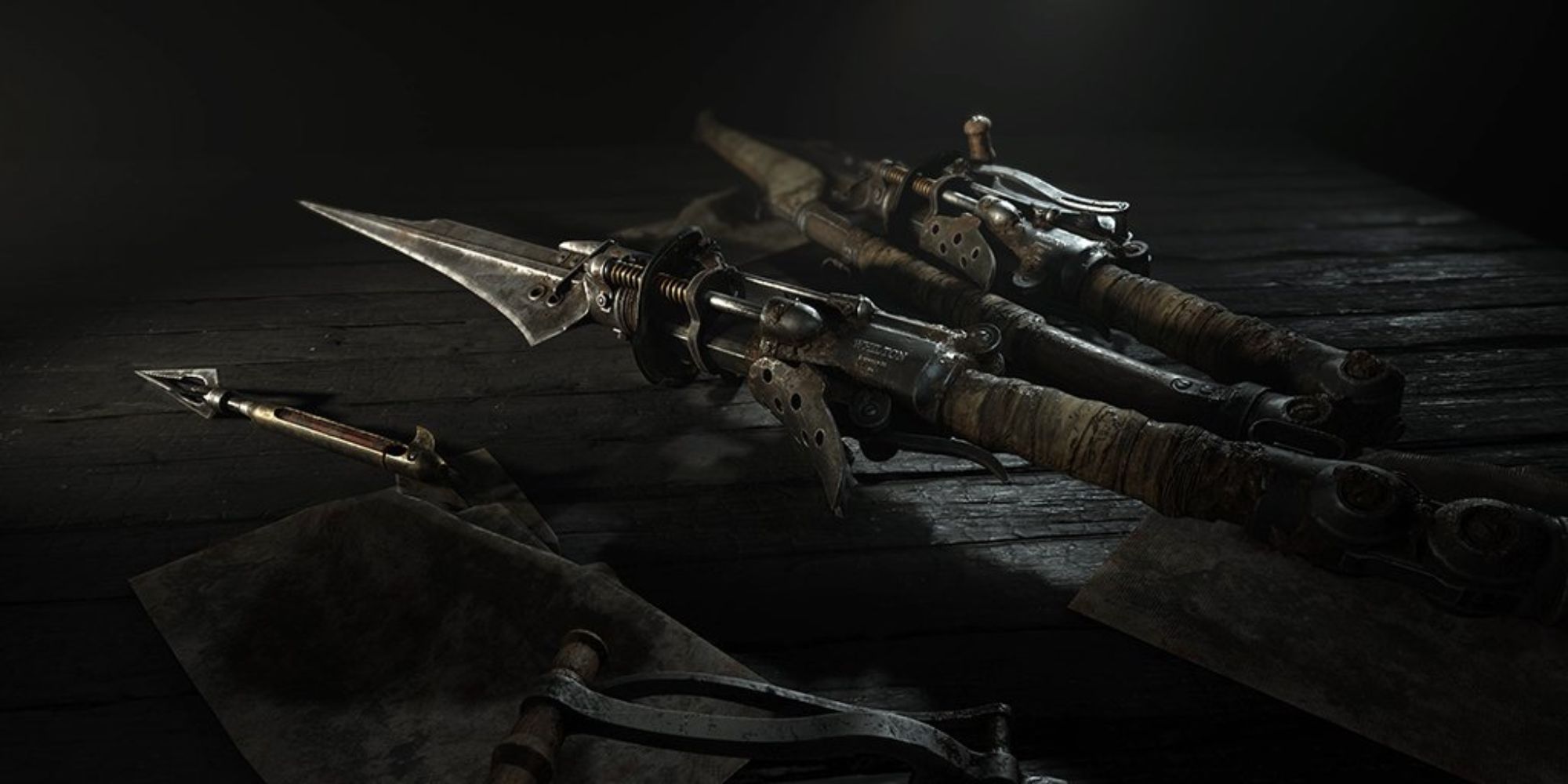 A weapon that strikes fear into almost anyone that sees it. This is not the weapon you want to find another hunter wielding in any sort of enclosed space.

The Bomb Lance is really a weapon with two parts. The most commonly used is its pretty good reach and deadly strike as a melee weapon. It absolutely demolishes anything you swing it at, and it is pretty quick too. But, the second part is the explosive-strapped harpoon tip that you can launch at enemies at range. This no one is safe outside the swinging range as well. Pairing this with a rapid-fire pistol or midrange weapon is absolutely devastating. 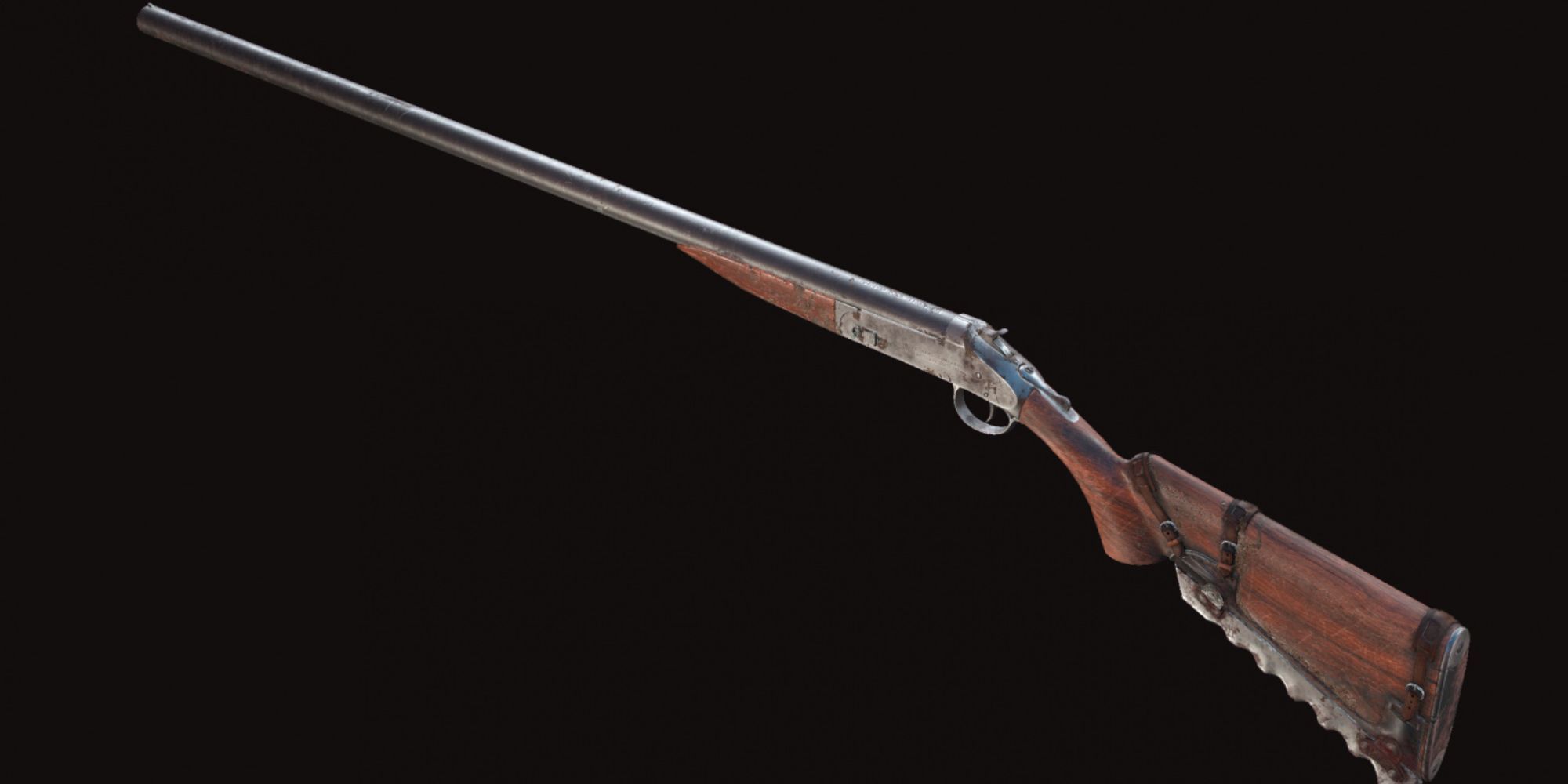 The Romero 77 may be a starter weapon, but one that has unique advantages compared to other guns.

First, there are so many different variations to help bolster your play style. Bladed, stocked, and sawn-off, all are available. Next, there are a good variety of ammo options, from the flare-like star shell, to slug, to dragonbreath that light enemies on fire.

#The last two things that make this gun great are damage and ease of use. It is a heavy hitter at close range and even medium with slugs. It goes toe-to-toe damage-wise with any of the breach-loading rifles, but is so easy to get a good handle on. Even at higher levels don't be afraid to run the Romero. 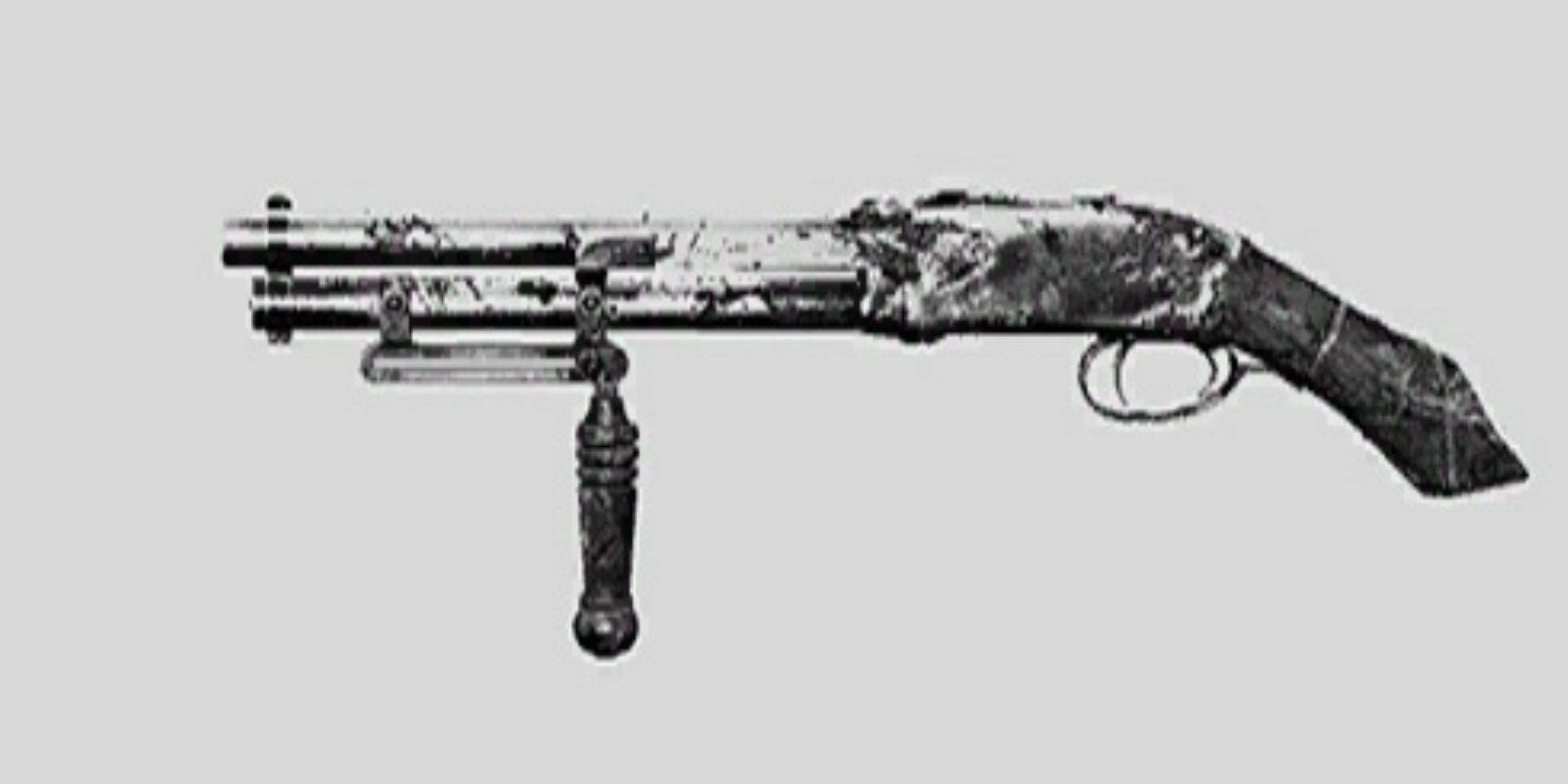 The best-of-the best in shotguns, and the most accessibly deadly weapon in Hunt, the Specter Compact is the sawn-off version of the full-sized Specter.

This pump-action shotgun boasts a deadly amount of power behind it, a good amount of ammo variation, can pump out multiple rounds in a small-time frame, especially with the Iron Devastator trait, and, since it is only a mid-sized weapon, it allows for a lot of different mixes of other weaponry to prepare for other types of engagements.

It is truly the gun that can set you up to win all kinds of engagements without spending a lot of money.