Anyone who plays an Elder Scrolls game will sell their soul to the Dark Brotherhood. The lure of this secretive guild of assassins is simply too much to resist. They're a group of sinister cloaked killers who worship Sithis, a deity representing misanthropy and the void, which is metal as hell. Why wouldn't you join? Well, I guess all the murdering is pretty bad, depending on your perspective. But it wouldn't be much of an assassination guild if you didn't have to occasionally end someone's life.

When you join the Dark Brotherhood you know exactly what you're signing up for. If you're role-playing as a good, righteous, heroic character, joining their ranks is probably a bad idea. Some of the targets you're asked to permanently 'deal with' arguably deserve to be killed, but doing so is still a moral grey area. That's what makes these quests so interesting. It's fun as hell being a hooded assassin, but is it right? An enjoyable quandary to wrestle with as you go about your deadly business.

In Skyrim, joining the Dark Brotherhood is disappointingly easy. You hear a rumour about a boy in Windhelm who's been trying to summon them, yank on that plot thread, and it's not long before you're being welcomed into the organisation. However, in Oblivion you have to attract the attention of the Brotherhood yourself. This isn't a challenge in a practical sense. All you have to do is kill someone and you're basically in. But there's a catch that makes it tricky: the person you kill has to be innocent. 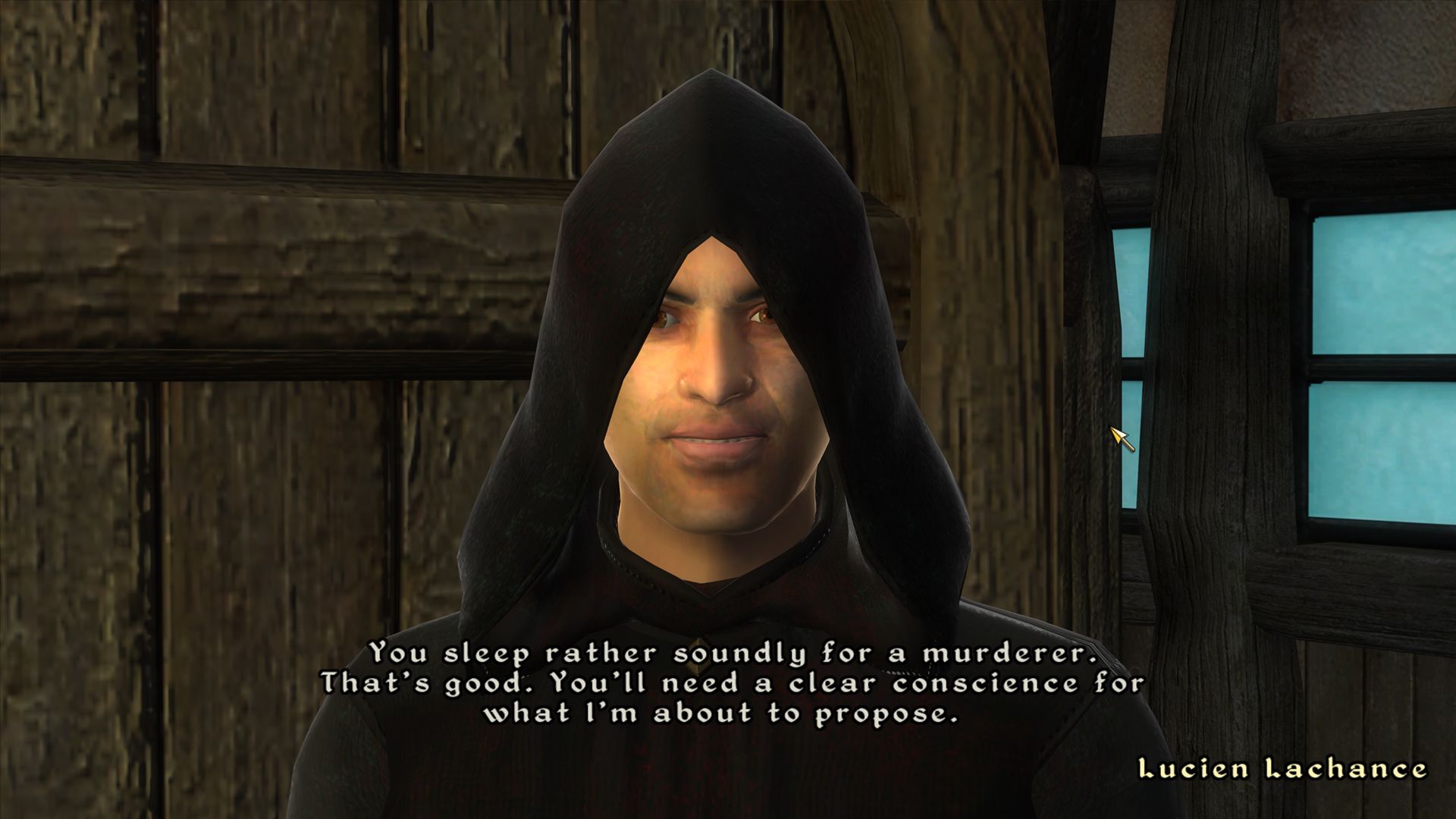 This decision still haunts me. This week I've been replaying Oblivion for the first time in about 5 years, and I'm getting the inevitable itch to join the Dark Brotherhood. But man, I'm finding choosing an innocent person to kill more difficult than ever. I know it's just a game and the people in Cyrodiil are little more than ugly, misshapen shop mannequins with stunningly basic AI routines running in their heads. But I still don't want to murder any of them. Why should I get to decide who lives and dies?

Things get even darker when you start thinking about who you can kill to secure your Dark Brotherhood membership. I consider the skooma den in the city of Bravil, where addicts gather to drink Tamriel's illegal narcotic of choice. I could kill one of them and no one would miss them, which I'm aware sounds like something Patrick Bateman would scribble in his secret diary. I feel bad for even thinking it, but it's a proven (and macabrely popular) method of getting noticed by Lucien Lachance.

When you kill an innocent in Oblivion you receive an ominous message: your killing has been observed by forces unknown. This lets you know that you're now on the Brotherhood's radar and it's only a matter of time before you meet them. Go to bed and you'll be woken up in the night by Lachance, beginning your initiation. He's a Speaker, one of the most powerful ranks in the Dark Brotherhood, and a very creepy dude. But meeting him leads to some of Oblivion's best quests, so he's worth talking to. 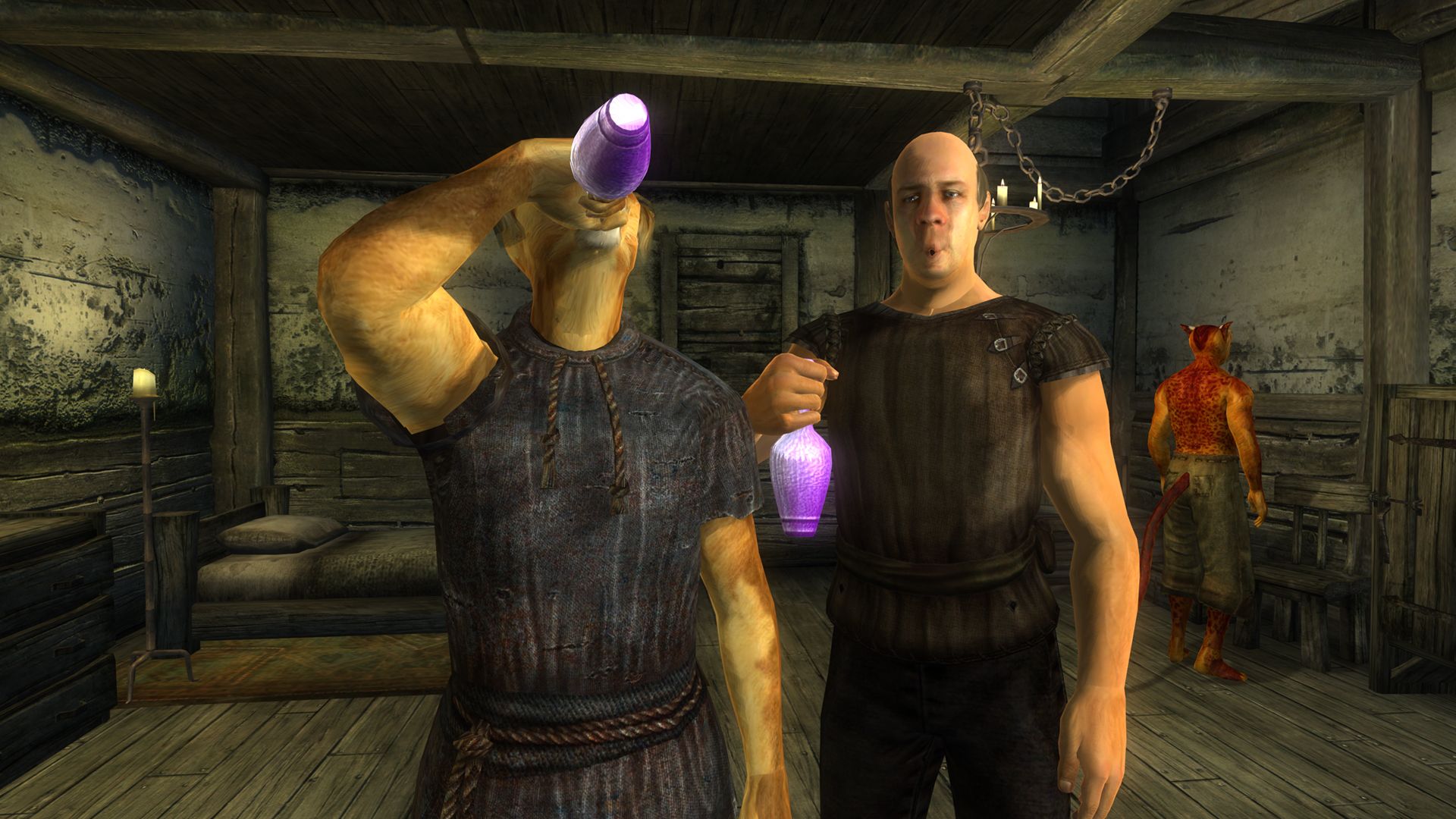 To get into the Dark Brotherhood you can kill any NPC in the game that isn't vital to a quest. You can kill a town guard if you have some money to spare and don't mind paying a 1000 gold bounty. You could also kill your doppelgänger in the Shivering Isles quest Symbols of Office, the infamous Adoring Fan, or arena champion Agronak gro-Malog. There are a lot of options, but it still feels weird going out of your way to kill someone. Someone you've chosen, not dictated by the developer.

I suppose that's the price you pay if you want to be an assassin. I realise it's a bit hypocritical stressing about murdering someone so I can ultimately join a cult of murderers for hire, but gimme a break. It's hard. Between this and my recent visit to the cursed town of Hackdirt, I'd forgotten how dark Oblivion can be. As twisted as it is, if the Dark Brotherhood returns in The Elder Scrolls 6, I hope Bethesda goes back to this method of joining. It's evil, but way more interesting than how Skyrim handled it.