Ravensburger is bringing The Princess Bride to the tabletop in an exciting adventure board game experience where true “wove” must prevail.

William Goldman’s The Princess Bride was released in 1973, and has been a fan favorite ever since. However, it’s the 1987 movie of the same name, also written by Goldman, that is perhaps remembered most. The Rob Reiner classic saw the original story, kissing and all, read to a sick grandson by his grandfather. This clever framing device was quickly copied by countless other films.

The Princess Bride Adventure Book Game sees one to four players gather together to defeat evil, ensure true love prevails, and most importantly, keep the plot on track. It is told over six chapters, and sees players work collectively to face the challenges of the fire swamp, escape the shrieking eels, search for the six-fingered man, and find Miracle Max – all while overcoming the constant interruptions from a sick grandson! The game promises an accurate portrayal of the book/movie, with many challenges to overcome that fit the storyline. Each chapter takes about 15 minutes to play, giving a total game time of 90 minutes. Set-up is minimal, and the game features a solo play set of rules as well. 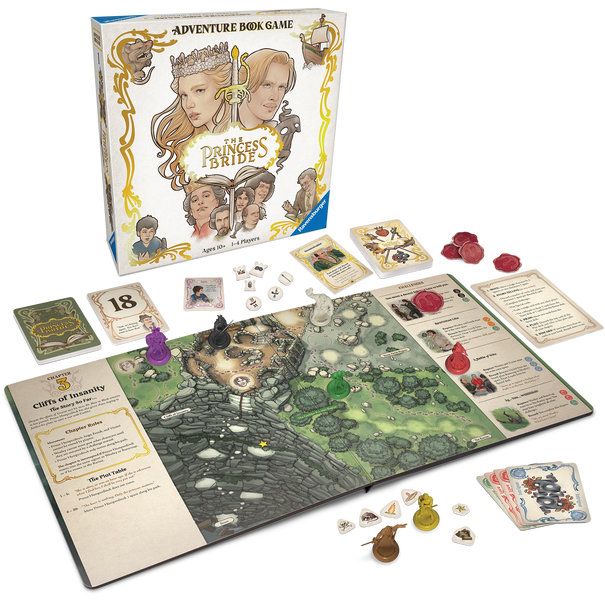 The artist behind Youtube channel Medusa Dollmaker illustrated the box front cover, and has given us a sneak peek of the game contents. As we expected, this game is beautifully illustrated and captures the aesthetic perfectly. It also includes six plastic miniatures that can be painted, as you wish. The detailed sculpt of Westley, Buttercup, Fezzik, Inigo, Vizzini, Prince Humperdink, and Count Rugen are exceptional for a mainstream board game at this level. We wouldn’t be surprised if fans buy this game just to paint the miniatures!

The Princess Bride Adventure Book Game is expected to retail at $24.99 and will be available this Fall. Inconceivable to many, this will be a Target exclusive at first when it hits their shelves on October 4th. No further details of worldwide pricing or availability or that of a general North American release have been announced as of yet

NEXT: The Terra Incognita Expansion For Civilization: A New Dawn Is Up For Pre-Order