A new report from InfluenceMap, a London-based nonprofit think tank focused on climate and sustainability issues, finds evidence that Facebook is allowing groups to use its ad targeting tools to spread doubt about climate change. Drawing on data from Facebook ads, the organization identified 51 climate disinformation campaigns in apparent violation of the platform’s rules against false claims, which were viewed 8 million times across the U.S. in the first half of 2020.

Facebook, of course, is no stranger to controversy where its ad network is concerned. In March 2019, the U.S. Department of Housing and Urban Development filed suit against Facebook for allegedly “discriminating against people based upon who they are and where they live,” in violation of the Fair Housing Act. When questioned about the allegations during a Capital Hill hearing last October, CEO Mark Zuckerberg said that “people shouldn’t be discriminated against on any of our services,” pointing to newly implemented restrictions on age, ZIP code, and gender ad targeting. But subsequent studies have established Facebook’s ad practices remain at best problematic and at worst actively discriminatory and inconsistent.

Last month, Facebook launched a climate information hub dubbed Climate Science Information Center and said it was “committed to tackling climate misinformation” through its existing fact-checking programs. However, InfluenceMap found that under the current regime, anti-climate groups have exploited Facebook’s ad and targeting abilities to spread disinformation, intentionally sowing doubt and confusion around the science of climate change. (InfluenceMap defines disinformation as false information disseminated with deceptive intent.) Two ads identified in InfluenceMap’s survey — both from a campaign run by PragerU, a U.S. conservative nonprofit — started on January 23 and ran up to October 1, over two weeks after Facebook made its announcement. 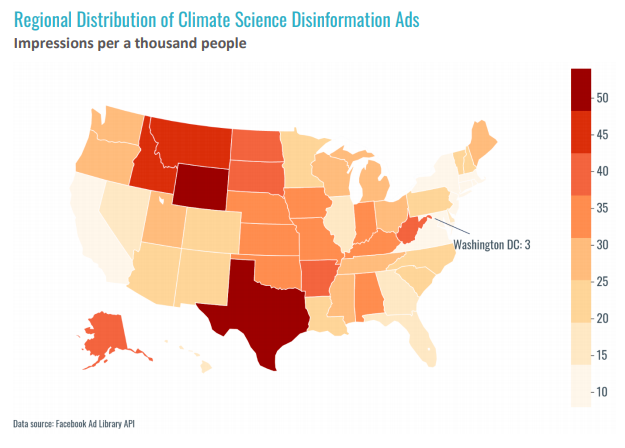 InfluenceMap tapped Facebook’s Ad Library to identify around 250,000 Facebook pages in the U.S. that use paid-for ads to promote political messages. (Facebook launched Ad Library, an API that provides data on political and advocacy advertising, in May 2018 following controversy over the Cambridge Analytica scandal and Facebook’s role in elections.) Cross-referencing a list of 95 advertisers known to have previously amplify climate disinformation, InfluenceMap identified the aforementioned 51 climate disinformation ads in the U.S., which spanned a six-month period starting January 2020.

Part of the problem appears to stem from Facebook’s nebulous fact-checking policy, which relies on third-party organizations to fact-check content and ads including climate information on its platforms. Because the fact-checking program is “not meant to interfere with individual expression, opinions, and debate,” according to Facebook, it has likely allowed some forms of disinformation to be exempted from fact-checking. In June 2020, E&E News reported that Facebook permitted a post containing climate disinformation to be classified as “opinion” not subject to fact-checking. InfluenceMap postulates the same thing happened with the 51 ads it identified; Facebook only took down one at the time of research and let the rest run through their lifespan.

Opaque groups with tens of millions of dollars in funding like The Mackinac Center for Public Policy, Texas Public Policy Foundation, and the Competitive Enterprise Institute were the chief sources of the disinformation ads InfluenceMap spotted. (InfluenceMap pegs the cost of the 51 ads it identified at around $42,000 combined.) Their campaigns attacked the credibility of climate science and climate science communicators, often by targeting the United Nation’s Intergovernmental Panel on Climate Change, denying the widespread consensus on climate science, and suggesting there is a high degree of uncertainty while promoting alternative sources of information. 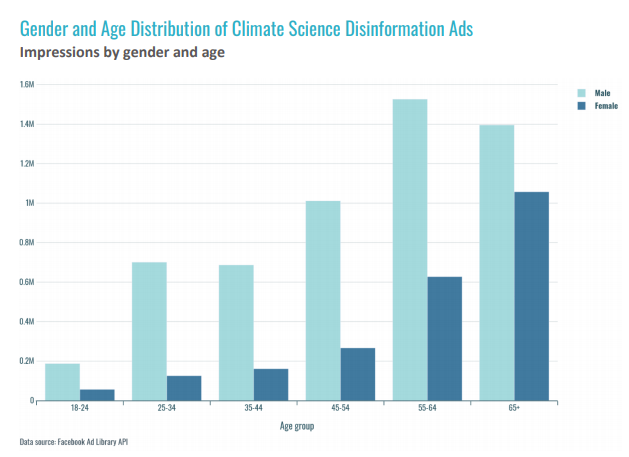 For example, some climate-science disinformation ads InfluenceMap identified contested that climate change is predominantly caused by the burning of fossil fuels releasing greenhouse gases. Other ads focused on the role natural sources of carbon dioxide play in climate change, while others challenged the extent to which climate change is real and poses serious threats to humans.

InfluenceMap reports that these groups also made extensive use of Facebook’s ad targeting tools to reach audiences likely to be sympathetic to their cause. The climate disinformation ads InfluenceMap identified were “heavily distributed” in rural U.S. states and among males over the age of 55, with the largest intensity of impressions per person found in Texas and Wyoming. More climate disinformation ads were shown to males than females across all age groups. And while 18-34-year-olds were shown more ads contesting the predicted consequences of climate change, those aged 55 and over were likely to be shown ads contesting the causes of climate change.

In a statement, Bill Weihl, Facebook’s former director of sustainability and founder of the nonprofit ClimateVoice, said the study’s findings pointed to the inefficacy of Facebook’s attempts to combat with disinformation. “Calling out the climate misinformation issue on Facebook is crucial,” he said. “It’s yet another attempt by Facebook to say ‘we’re doing some good’ when the problem continues, mostly unabated.”

Above: Examples of disinformation campaigns spotted by InfluenceMap.

As the U.S. general presidential election nears, Facebook has increasingly faced criticism for its handling of potentially misleading and deceptive ads shown to its hundreds of millions of U.S. users. In early August, The Washington Post reported that false political ads weren’t flagged by the company’s fact-checkers because of a policy protecting politicians from rules against deception. While Facebook later pledged to take steps to tamp the spread of political disinformation, in part by limiting some advertising in the week before the U.S. election, the company initially refused to commit to banning ads falsely claiming a politician won the vote prematurely.

“InfluenceMap’s devastating report reinforces and reveals how Facebook lets climate deniers spread dangerous junk to millions of people,” Senator Elizabeth Warren (D-MA) said in a statement. Warren, along with Senators Tom Carper (D-DE), Sheldon Whitehouse (D-RI), and Brian Schatz (D-HI), published a letter this summer urging Facebook to “close the loopholes that let climate disinformation spread” on its platform. Facebook said in response that its third-party fact-checking partners regularly review and rate climate misinformation and that there’s never been a prohibition against them doing so, but that these reviews don’t encompass opinion articles. 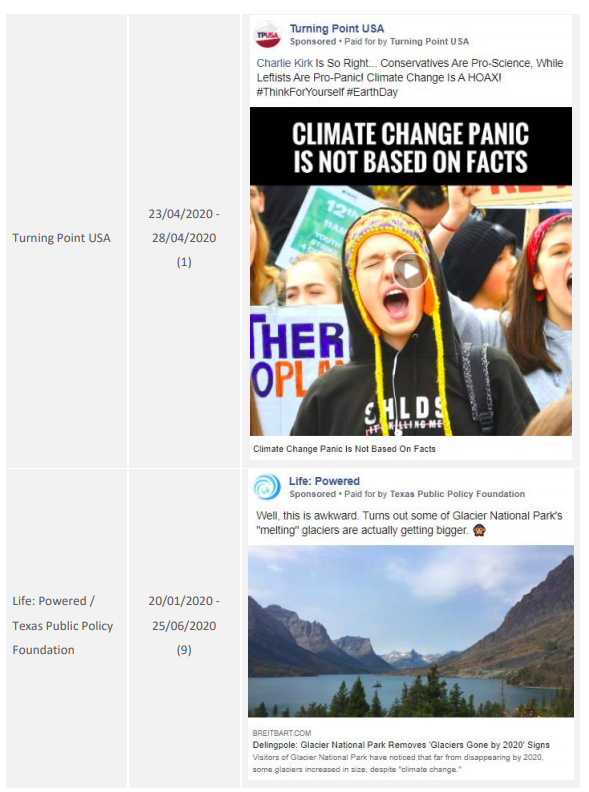 According to a recent survey by the think tank Data for Progress, a majority of polled U.S. voters think Facebook should label opinion articles containing false information about climate change as false.

“We have repeatedly asked Facebook to close the loopholes that allow misinformation to run rampant on its platform, but its leadership would rather make a quick buck while our planet burns, sea levels rise, and communities — disproportionately Black and brown — suffer,” Warren continued. “Facebook must be held accountable for its role in the climate crisis.”