Into the Breach, the acclaimed indie tactics game from Subset Games, recently launched on… Netflix. Over the last few years, the streaming giant has been making its way into the interactive space. In 2018, it released Black Mirror: Bandersnatch, an FMV-style episode of its popular sci-fi anthology series, in which players could make decisions at various points. Since then, Netflix has continued to invest in games, for example through the interactive Unbreakable Kimmy Schmidt movie and You vs. Wild, a series of playable shorts starring Bear Grylls.

Netflix has also made inroads into gaming in more traditional (read: not FMV) ways. Most notably, any Netflix subscriber with a smartphone can now access dozens of games through the app. Well, it’s actually a little more complicated than that. You can find the games in the app and click on them, which will open up the App Store, where you can download the game. Once it’s downloaded, you’ll need to log into your Netflix account to play it. So, there are two login screens standing between you and mobile Netflix gaming, but if you remember your password (or can easily find the text from your mom where she gave you hers) you can play games on the go. Some of which are great.

Which brings us back to Into the Breach. The 2018 mechs vs. kaiju game is now accessible via Netflix which means you can now play a really good tactics game for free with no microtransactions on your phone. I played a fair amount of Into the Breach when it launched. It was the subject of immense critical praise at the time and won its fair share of game of the year awards even against stiff triple-A competition from the likes of Red Dead Redemption 2, God of War, and Marvel’s Spider-Man. Despite liking it, and despite the avalanche of praise it received from my peers, it wasn’t a game that I really connected with. I played it to completion on easy mode, told myself I would play some more, and never really did. 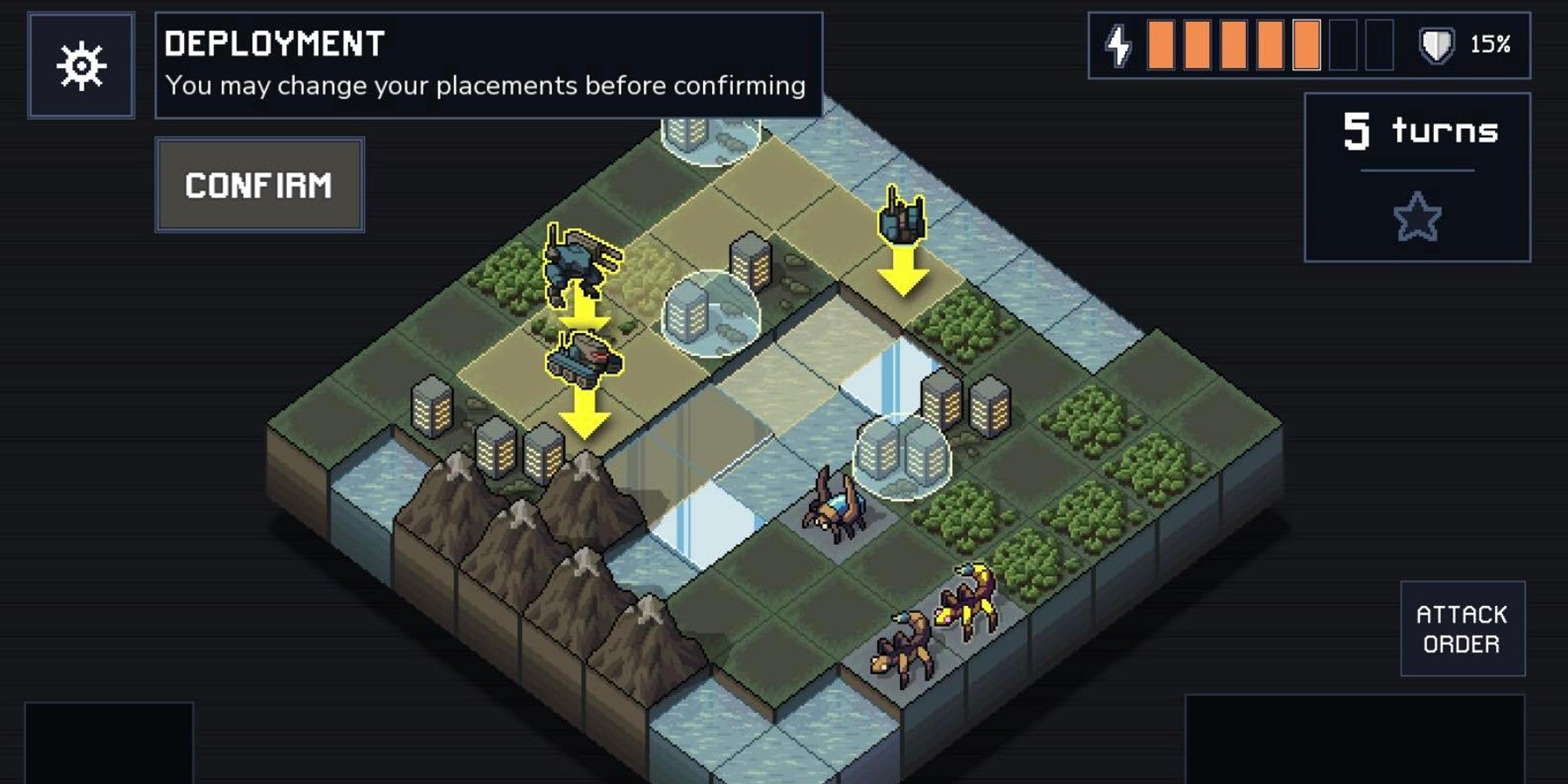 It turns out, that was mostly because I was playing it on PC. It eventually got ported to Switch, but back when I was trying to save the timeline, it was with a keyboard and mouse, while sitting in a hardback chair at my parents’ kitchen table. PC has never been my preferred platform, though I just got a new, comfy gaming chair which makes the prospect of long laptop sessions a little less daunting. Still, at the time, Into the Breach was too thinky and time-consuming a game for me to want to play it in an uncomfortable chair.

But now, wonder of wonders, I can play Into the Breach while lying down on my couch and watching Seinfeld. Things have changed. We have abandoned the less comfy timeline.

This is coming at the perfect time. Downwell has been my go-to phone game on-again-off-again for the past five years, and after playing it pretty intensely for most of the year, I'm headed into an off-again spell. But I've wanted something with a similar vibe; something that demands intense focus, but doesn't require much reading. I've been playing Triangle Strategy for the past few months, but I'm still only about five hours in. The moments when I most want a mobile game — like, when my wife is watching a sitcom on the couch next to me — aren't well suited for games with a lot of text. So, Into the Breach, which translates seamlessly to a touchscreen, contains minimal dialogue, and doesn’t ever necessitate being played with the sound on, is the perfect fit.

After hitting a wall with Downwell, I'm ready to commit myself wholeheartedly to a new roguelike. The genre — with its permadeath and speedy runs — fits mobile like a teenage war criminal sliding into a mech cockpit: they were made for each other. Most excitingly, the version of Into the Breach available through Netflix includes the Advanced Edition update, which adds a bunch of new content — new missions, squads, weapons, enemy types — for free.

My only real annoyance right now is that while Downwell allows me to listen to a podcast, the Into the Breach app shuts down any audio running on your phone when you open it. That makes it a less than perfect successor, but like allowing a towerful of civilians to collapse so I can save my best mech pilot from the Vek, it's a sacrifice I'm willing to make.