San Diego – the place John Hammond had originally intended to exhibit his vast array of dinosaurs. It sits in complete disrepair, a shell of an idea, with only the main amphitheater left standing from the abandoned project. This is where your Jurassic World Evolution 2 Chaos Theory journey continues after Isla Nublar.

When you arrive at the park site, you'll notice that there are no suitable dinosaur enclosures and a control center that is in desperate need of repair. While more straightforward than the previous Chaos Theory mission, San Diego isn't without its own challenges. 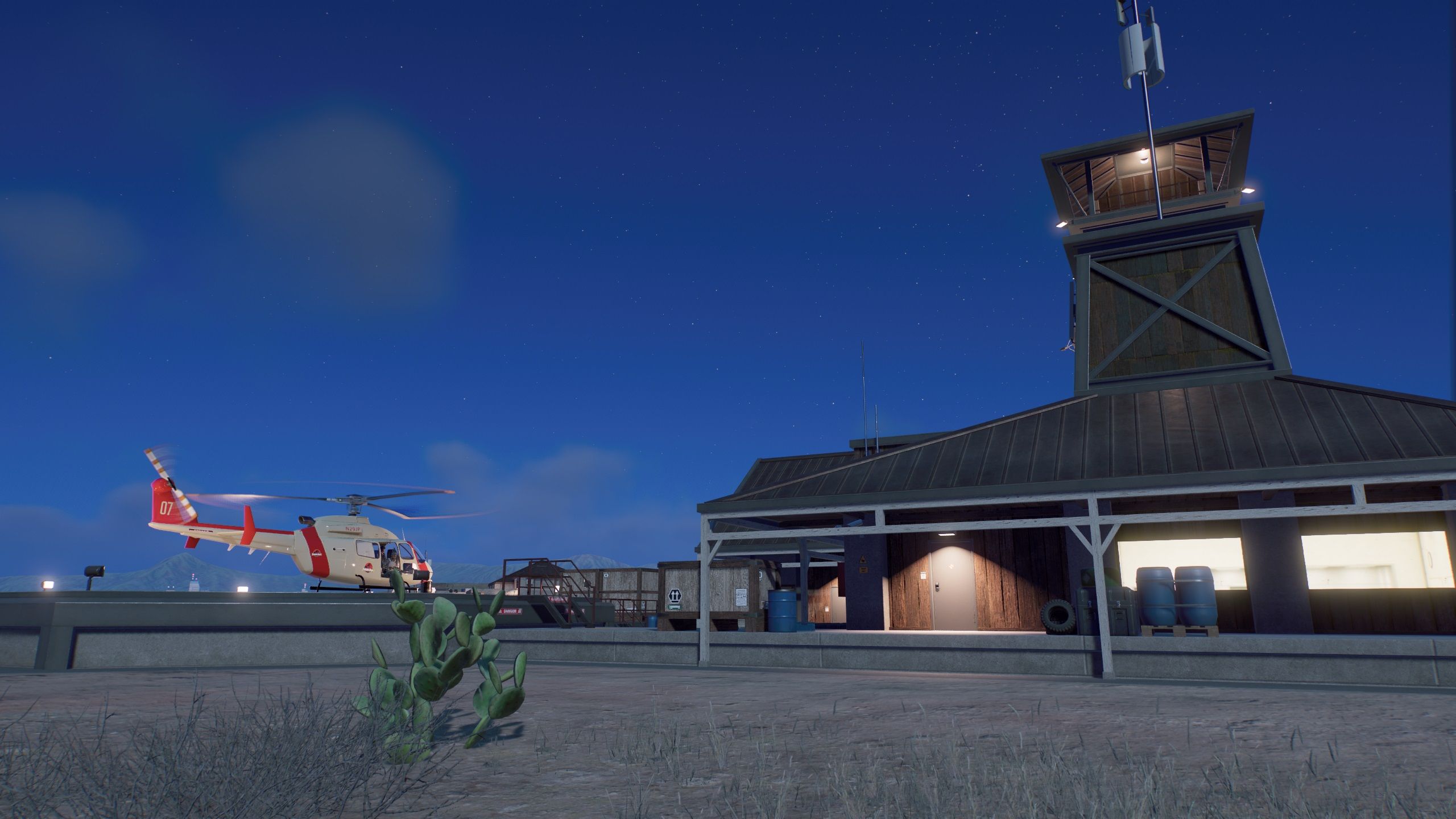 After listening to the introduction sequence, it's time to get to work. You'll be receiving your first delivery of dinosaurs very soon, so start repairing any fences that are broken and plugging any gaps in the two main enclosures that are already partially built. These existing enclosures are quite large for what you need right now, so it might be worth running a fence across the middle of one.

The first real mission you get is to repair and power all the existing buildings. Backup generators are your only option right now; they are useful but extremely expensive to keep running in the long term. Build yourself a response facility and either assign the tasks to the rangers or take manual control and repair the buildings yourself. Once the science facility is repaired and powered, you can start researching a more sustainable energy resource.

The park should be starting to take shape at this point, and you'll be ready to receive your first dinosaurs. One is a herbivore that needs open space, water, and ground leaf. Ensure they are either in a large enclosure by themselves or, if you split the existing enclosure in two, use the larger portion.

The second dinosaur you receive is a small carnivore. These don't require much space, but do need water, a feeding post, and enjoy being on the sand. 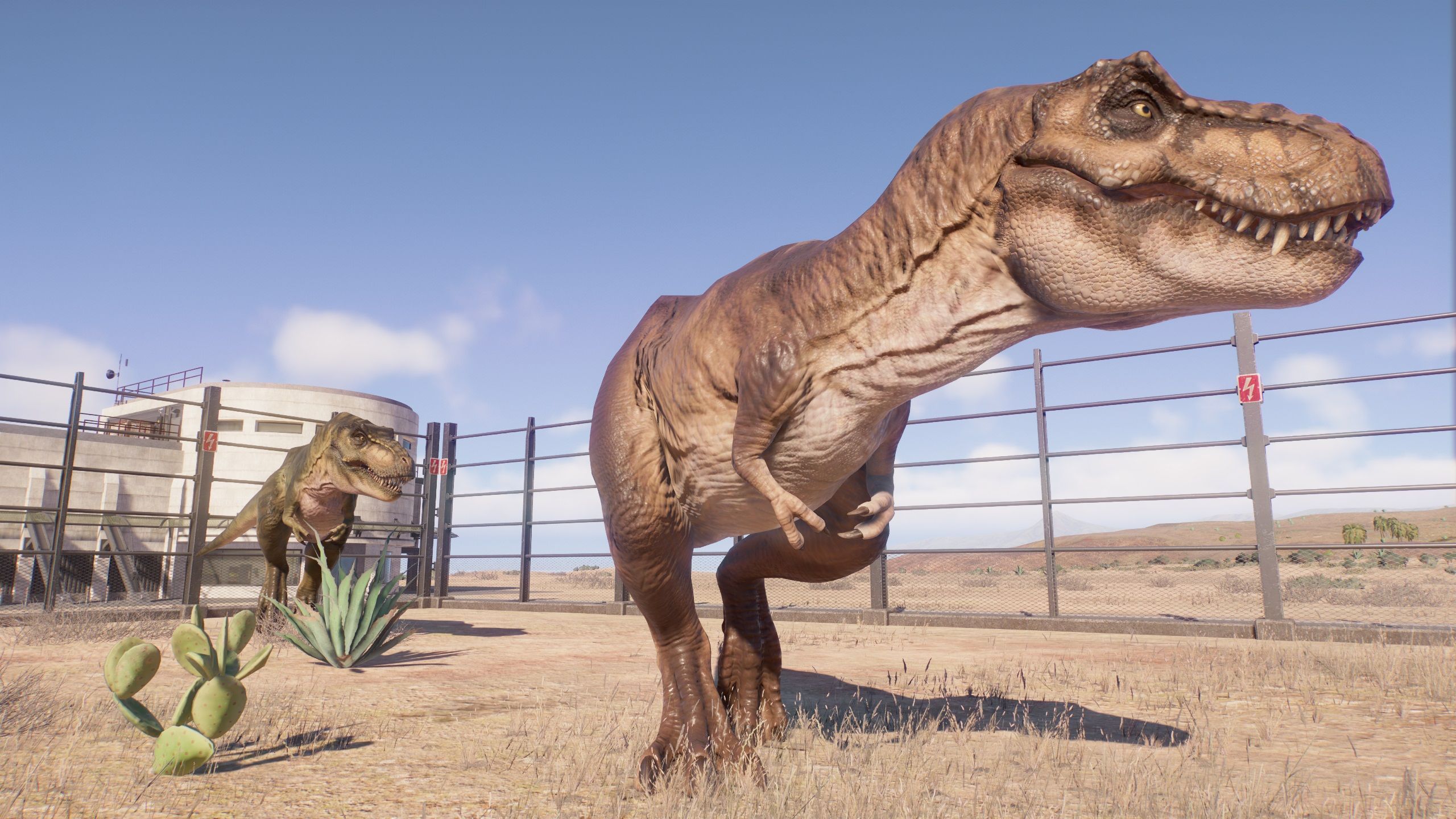 It isn't long before the big guns arrive – the Tyrannosaurus Rex. You'll be delivered two of these, and while they are by far the most dangerous thing that walks on two legs, they have the highest attraction rating. Keeping them happy and healthy is vital.

You'll notice that the amphitheater is itself an enclosure, the most lavish of all enclosures for the most savage of your exhibitions. It is most sensible to house the T-Rex in this area: it offers excellent viewing coverage and just looks right. Ensure they have sand, water, and a live prey feeder. 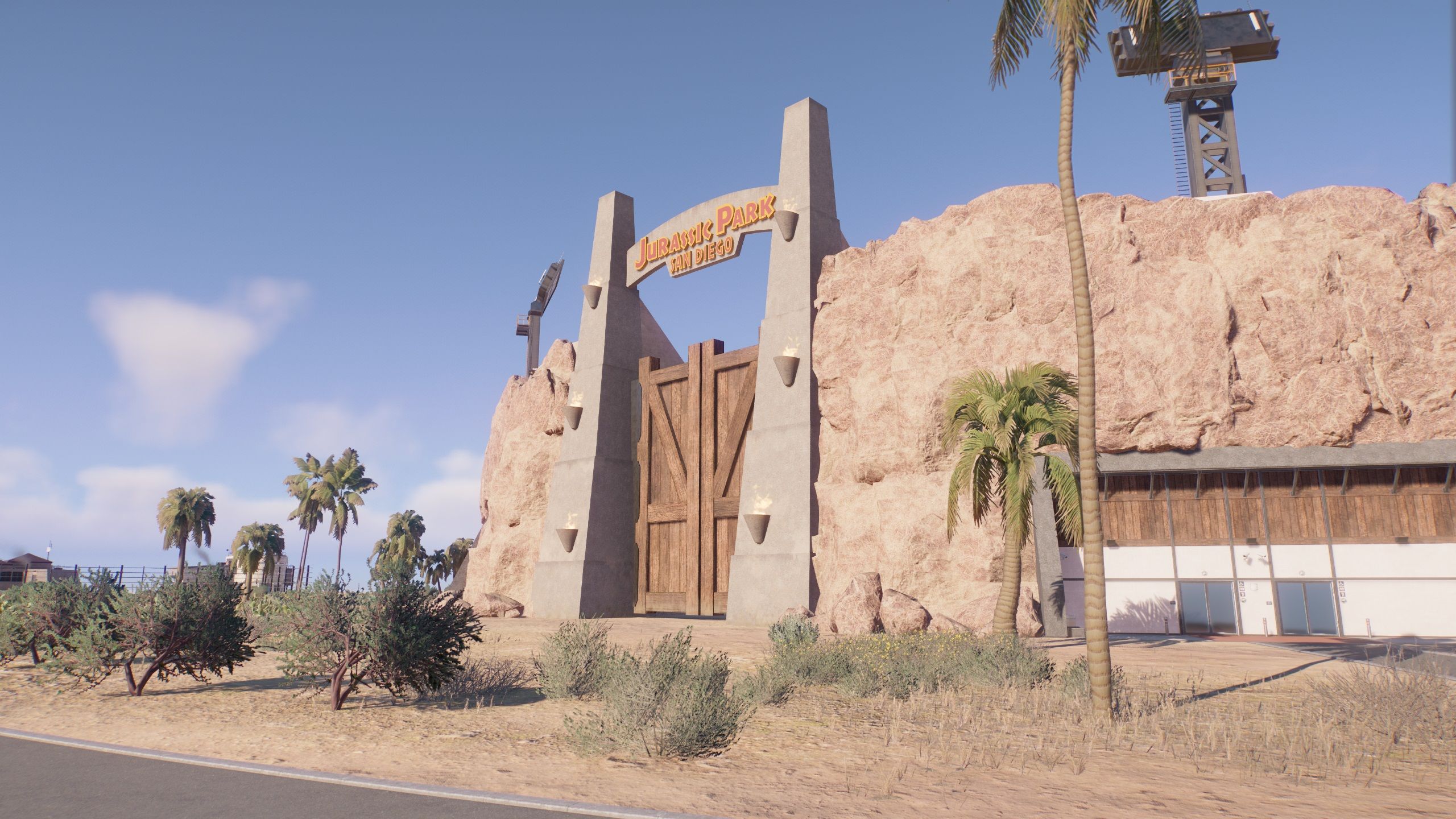 Once your new additions have settled into their enclosures, it's time to give them a quick once-over and make them as comfortable as possible. You're able to do this with your ranger teams, either take over them manually or assign the task to them through the menu.

Putting a ranger post inside each enclosure, and assigning that to a ranger team ensures that the dinosaurs are being scanned regularly. This takes a lot of manual work away from you and is vital for when the park becomes too large to do everything yourself.

It's now time to open the park. This is done via the arrival station. When the park has been opened, you'll get your next set of objectives:

These objectives will be repeated through your entire playthrough of the Chaos Theory mode, so it's important to note what helps with comfort and profit now, so you can build on it later.

The guest's comfort is improved with amenities, restrooms, shelters, and hotels. Think of it as a guest happiness meter. Because the T-Rex exhibition is most likely going to be your most popular attraction, take advantage of that by positioning shops and restrooms along the edges of the amphitheater. 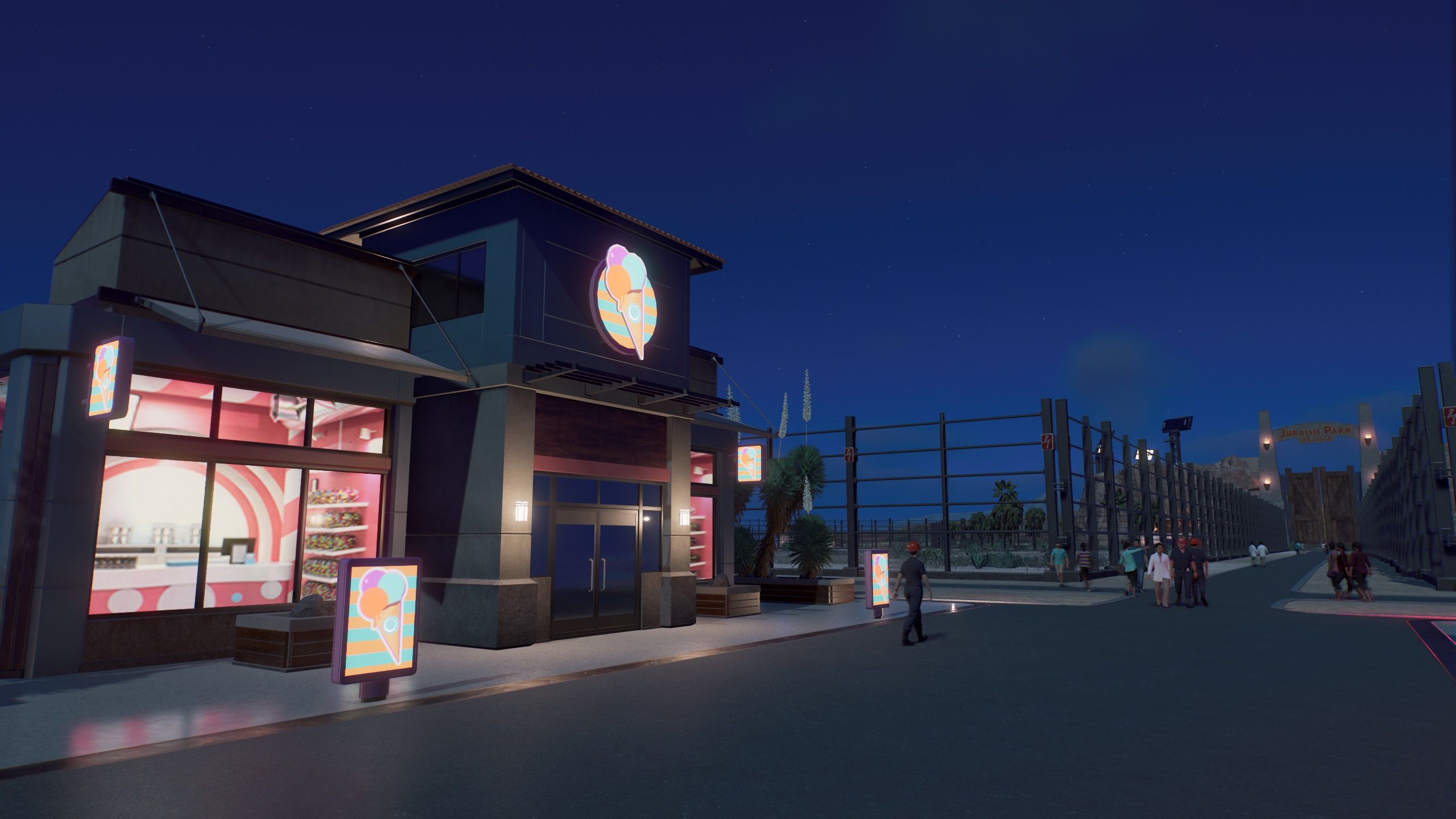 The visibility of your dinosaurs is important, as the guests want to see what you have to offer. Simply build a viewing gallery along the fence in each of your enclosures. The amphitheater acts as a giant viewing gallery, so there's no need to worry about this now.

With all the amenities you've been adding to increase comfort, you should be seeing quite a healthy increase in profits anyway, so this should naturally reach the $50,000 required. 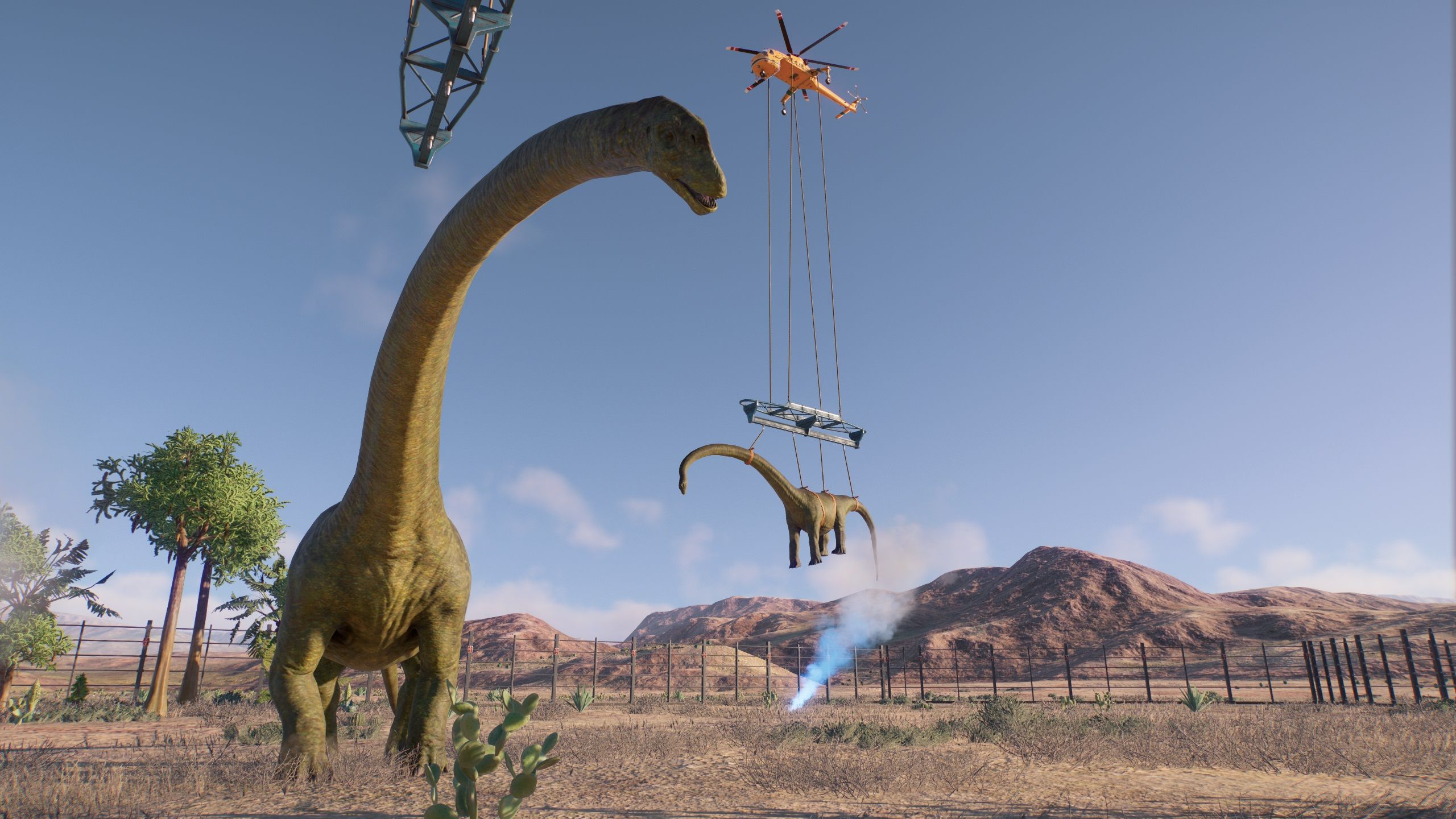 At this point, you'll get a message that you'll be receiving two more species of dinosaurs to your park. These are both herbivores, so having them in the same enclosure is fine and offers a bit more diversity than what you currently have on offer.

The space you have is ample, so either retrofit one of the currently partially built enclosures for these new arrivals, or build your own from scratch. You'll need a lot of open space, water, tall leaf, and ground nut to max out the comfort levels of your new scaly guests.

With the new dinosaurs bedded in, you'll receive a new set of missions:

Create an expedition and a fossil center. It doesn't matter much where these are located, but for vanity reasons, it may be better to place them on the outskirts, so they don't get in the way of your guests.

The expedition center allows you to send teams around the globe to dig up new fossils, fossils which can then be used to extract new dinosaur DNA for you to incubate and hatch. 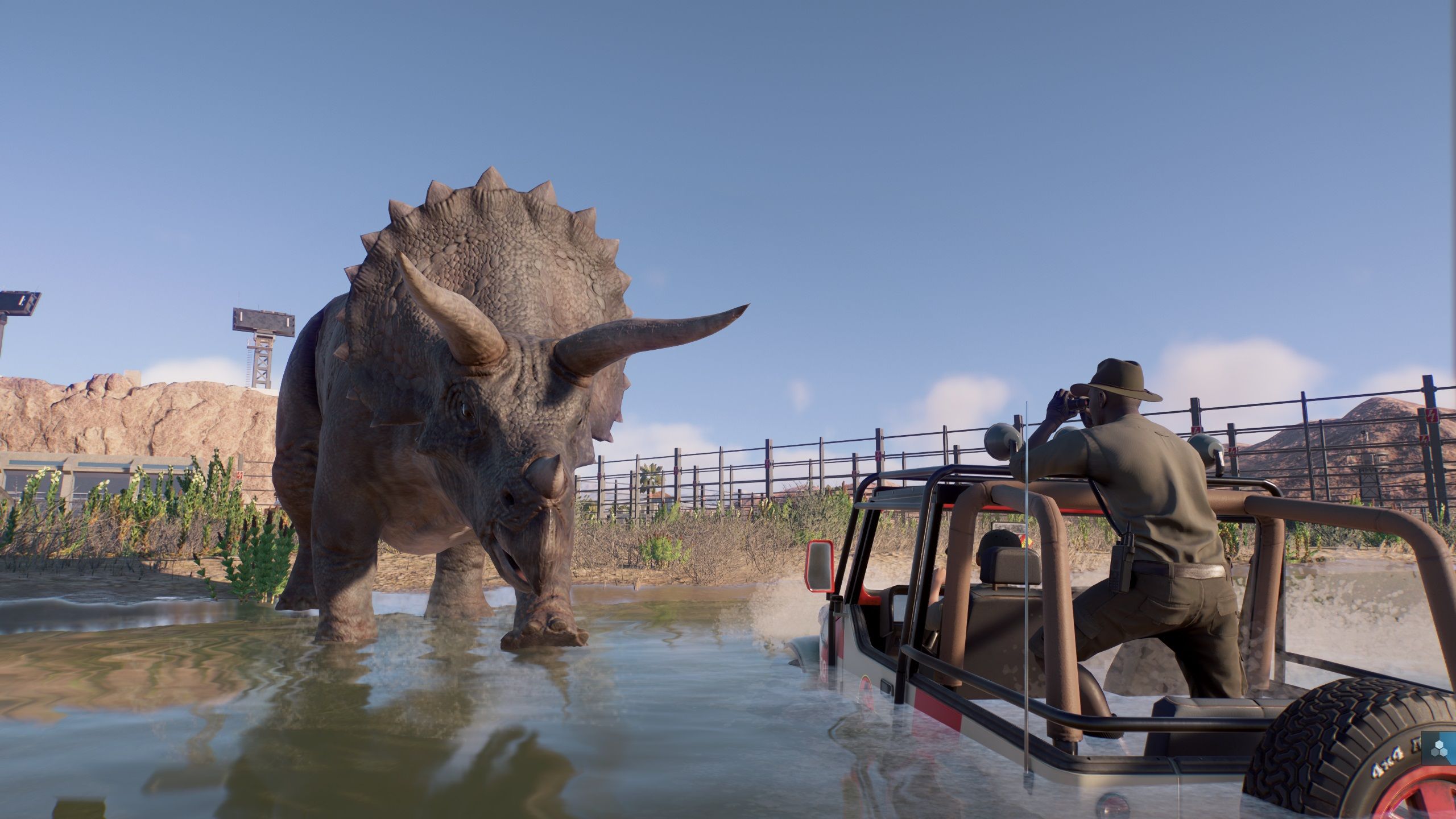 Focus on one species, for now. The Triceratops is a fan favorite and something available at the beginning. They're also large herbivores, so while they may fight among themselves occasionally, they'll never be a massive threat to your guests.

Gather enough fossils and extract them all to grow the dinosaur genome to as close to 100% as you can. Once you have a sufficient level of the genome, build a hatchery and start incubating a new species for your guests to marvel at.

While you don't have to, it's nearly always worth having a hatchery built into an enclosure. You can airlift your new creations out of there, but watching them emerge from the gate is the quickest way for them to be on view.

Expanding The Boundary Of Your Park 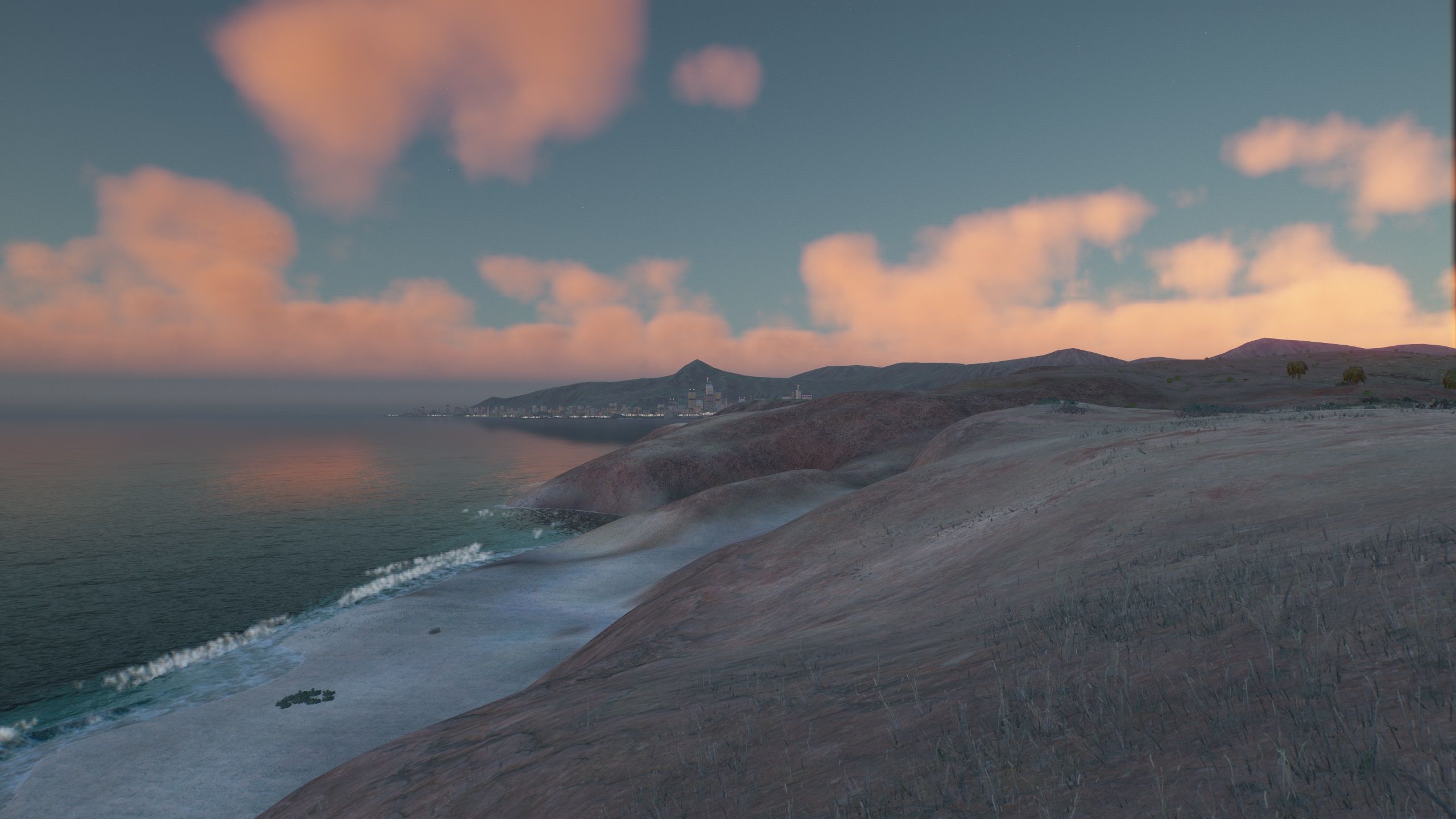 The next mission objective may come as a relief if you've started to run out of space with your current setup. There are two possible expansions to the boundaries of your park, both of which will be required to progress the story, and both are enabled by researching them from the tab.

A lot of these additional research tasks are only unlocked after increasing the star level of your park. Your star level is calculated mainly by profit, so make sure you are constantly expanding and adding new amenities. Check your management tab to see which areas are in most need of certain shops.

The next main set of objectives are:

Most of these objectives won't come as any surprise to you, nor will they pose much of a challenge. The appeal of the dinosaurs given to you already should be very close to 4,000, so if you've added any further additions, this should already be completed. 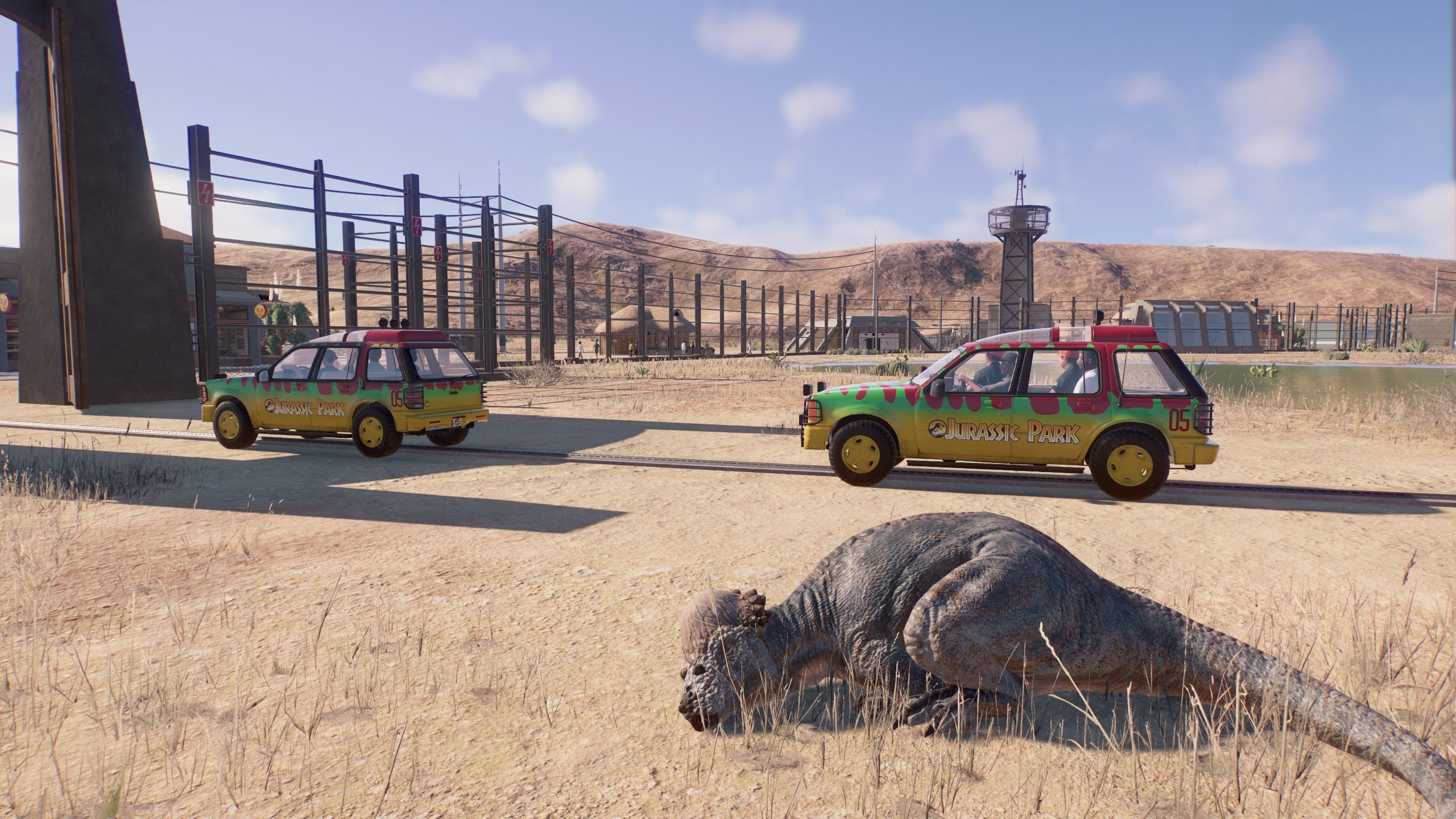 The only real challenge here is having 100 adventure guests in your park at once. These are a particular type of guests that won't be satisfied with sitting in viewing galleries and watching your dinosaurs sleep. They want action, they want adventure. The easiest way to increase this number is to research and build a few park tour tracks in and around your enclosures. There are on-rail car tours and can go inside enclosures. It might go without saying, but try not to have these tours interact with aggressive dinosaurs. They will be attacked and you'll incur hefty lawyer fees at the end of the month. 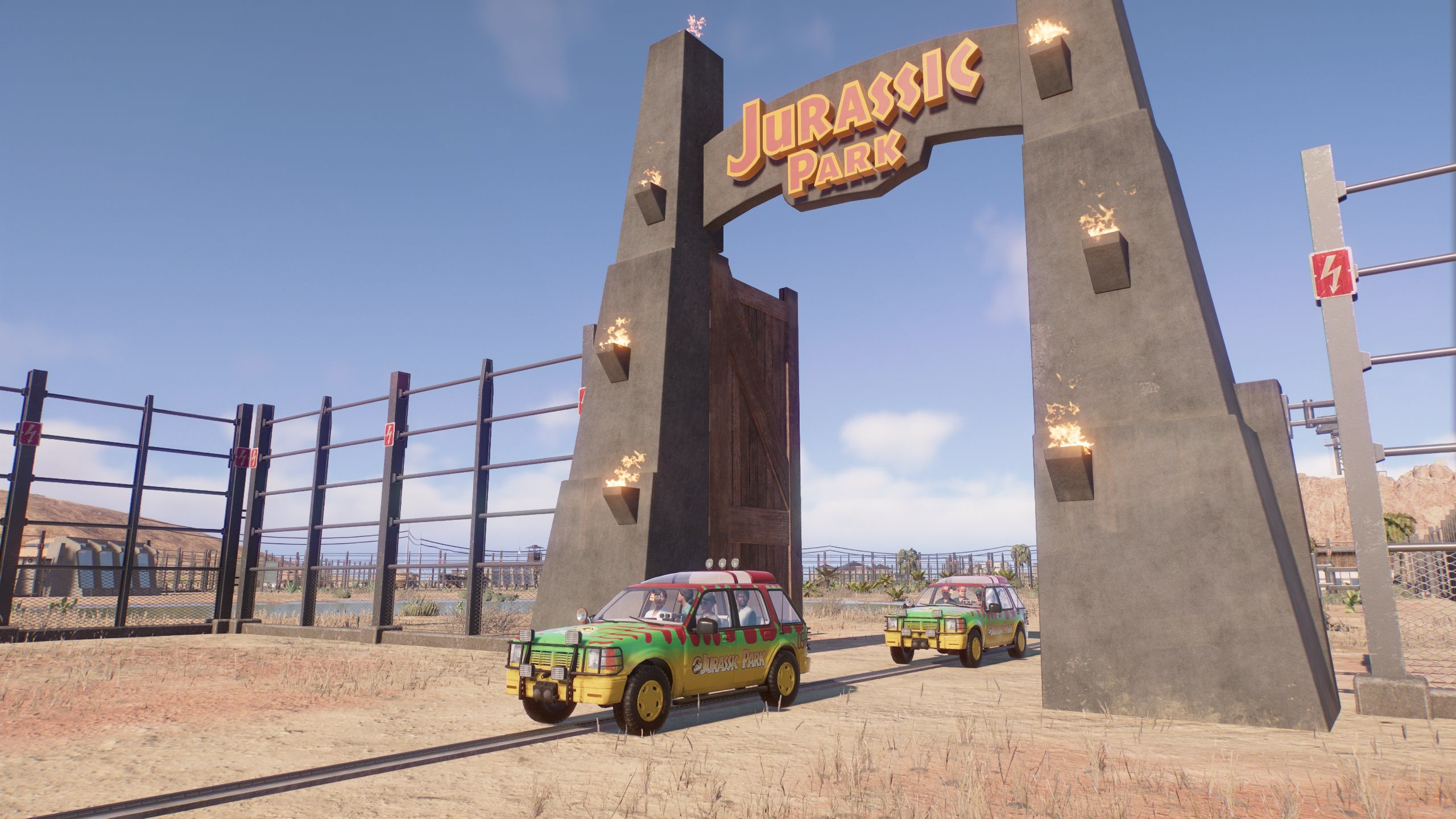 The last set of objectives will come pretty easily to those who have been careful with planning and expanding their parks so far. They are:

With the two boundary expansions you worked on previously, there is now plenty of room to expand and build those massive exhibits you've been dreaming up so far. Increasing the dinosaur species to ten is straightforward – more expeditions, more fossils, more hatching. This all feeds into new enclosures which will attract more guests, capitalised on by building more amenities. Constructing the large guest attraction buildings will also focus attention on that area, so consider making each enclosure its point of interest for your park.

The park rating will increase with profit, so ensure you're always on the lookout for where amenities are needed most.