The first Kingdom Hearts game launched over two decades ago, making it a nostalgic experience for many. Thankfully, it's still possible to play the entire series on current-gen consoles and PC thanks to the ReMIX versions. Though the first game is a beloved one, there's no denying that its age does show in some aspects.

The controls are often frustrating, the faces can look silly, and you'll probably be pretty easily stumped on where to go next because there are no real directions. However, there's so much charm and whimsy packed into this game that make it iconic. These are some of the shared experiences we all have of this classic. 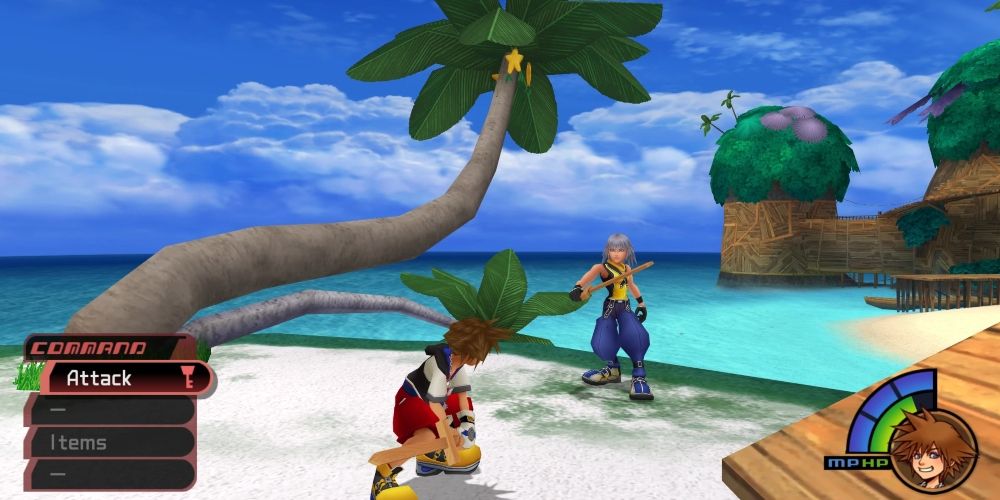 Before things get real, you get to spend some time chilling and collecting things on the Destiny Islands. You also get to know the kids on the island, including Sora's best friend and rival, Riku. At the beginning of the first game he's a smug guy, and he likes to challenge Sora to things.

You can race and engage in battle against him with your wooden sword, and… let's just say he's smug for a reason. You most likely won't win against him the first time round, unless you know exactly what you're doing, especially in battle. Luckily, you can challenge him as many times as you want, but it can take a lot of tries before you finally get him.

9/10 Falling Off The Mushrooms In Wonderland 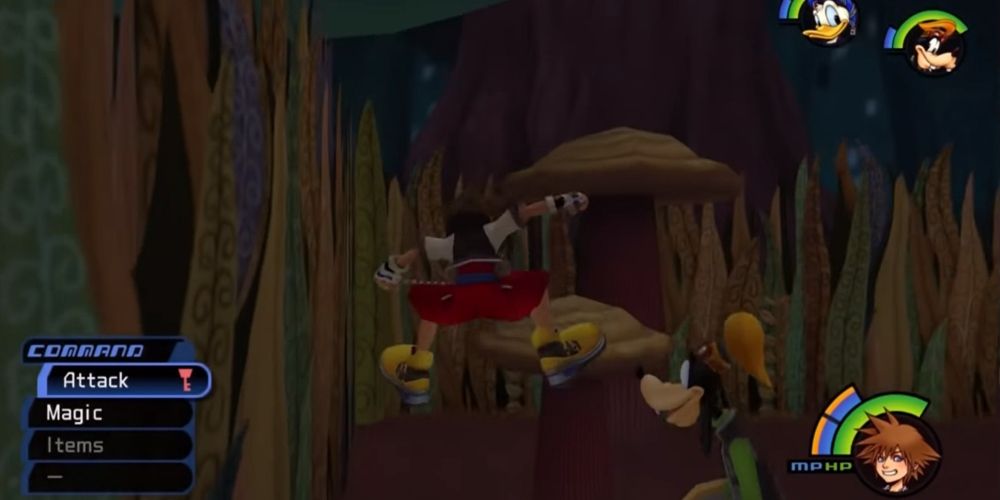 Wonderland is full of twists and turns in its original iteration, and it's the same in Kingdom Hearts with its riddles, hidden objects, and upside down rooms. You either love or hate the world, but there's one thing everyone can agree on: the mushroom platforming is frustrating.

You have to jump on various mushrooms to get to certain rooms or open certain treasures, but if you're off by just a little bit, Sora just won't land on the mushroom's cap. This happening once is annoying, but after a few times, you'll have to put your controller down and take a break. 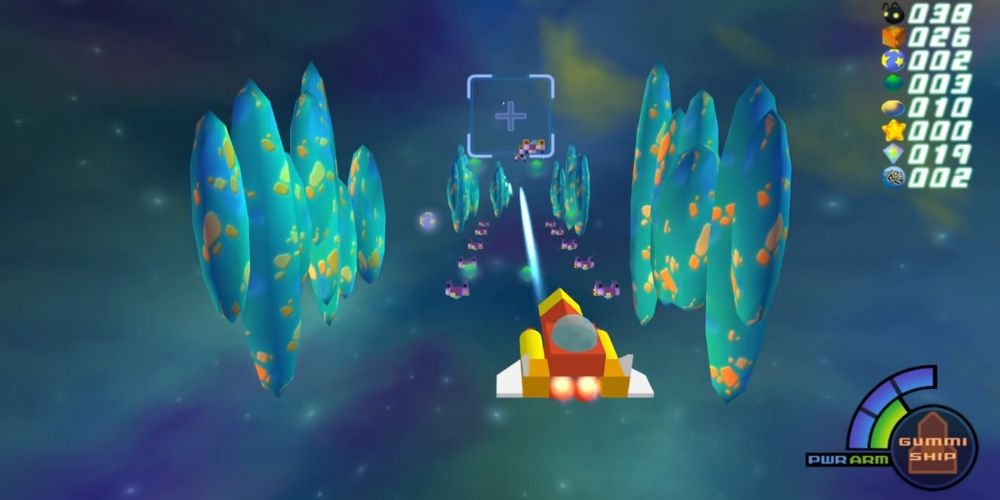 The Gummi Ship sections are vastly improved in later Kingdom Hearts games, but it's the bane of many players' existences in the first game. It's boring and tedious, but you also have so little HP that you have to pay some attention or you'll be forced to start the whole thing over again.

You can customize your Gummi Ship to have more HP, armor, and abilities, but the explanation and process are so confusing that most people don't even bother. Of course, this makes it all the more disappointing when you open a treasure chest only for it to be a Gummi part.

7/10 Getting Lost In Deep Jungle 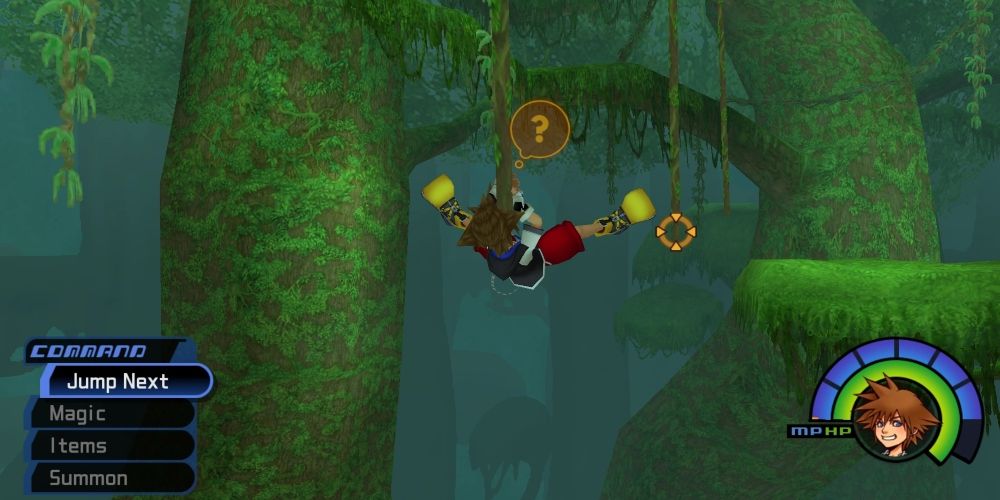 The fact that they got to add Tarzan's story into the game is pretty cool, but Deep Jungle has got to be one of the most confusing worlds in the entire series. It makes sense that green is the dominant color, considering where you are, but everything being green and having a bunch of different exits makes it quite difficult to know where you're going.

As if that's not bad enough, the section where you have to swing on vines to reach certain places makes it even more confusing. Have you been here before? How many areas can you get to like this? Are you going the right way? To top it off, one misplaced button press, and Sora falls all the way back down. 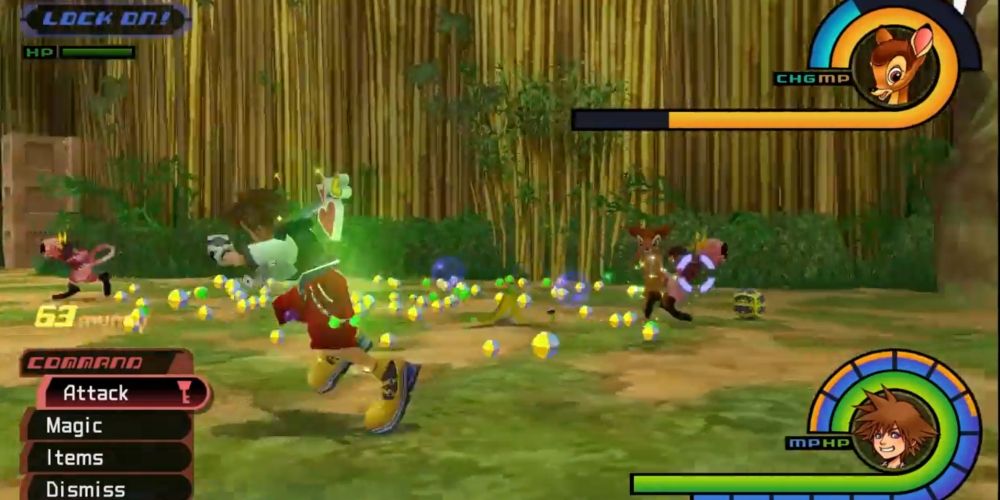 One cool thing about Kingdom Hearts is all the different Heartless designs and abilities, especially those that match specific worlds. Bouncywilds are one example of that, as they're Heartless that look like monkeys, and they can be found in Deep Jungle. Unlike other Heartless, they have a special trick to frustrate you.

Besides shooting you with their slingshot, Bouncywilds can drop banana peels as they run. Watching Sora and other party members slip on the peels is funny… until you realize that doing so makes them drop a bunch of munny. The good news is that Bouncywilds drop a lot of munny themselves when they're defeated, but their speed and range don't make that super easy for you.

5/10 Getting Lost In Monstro 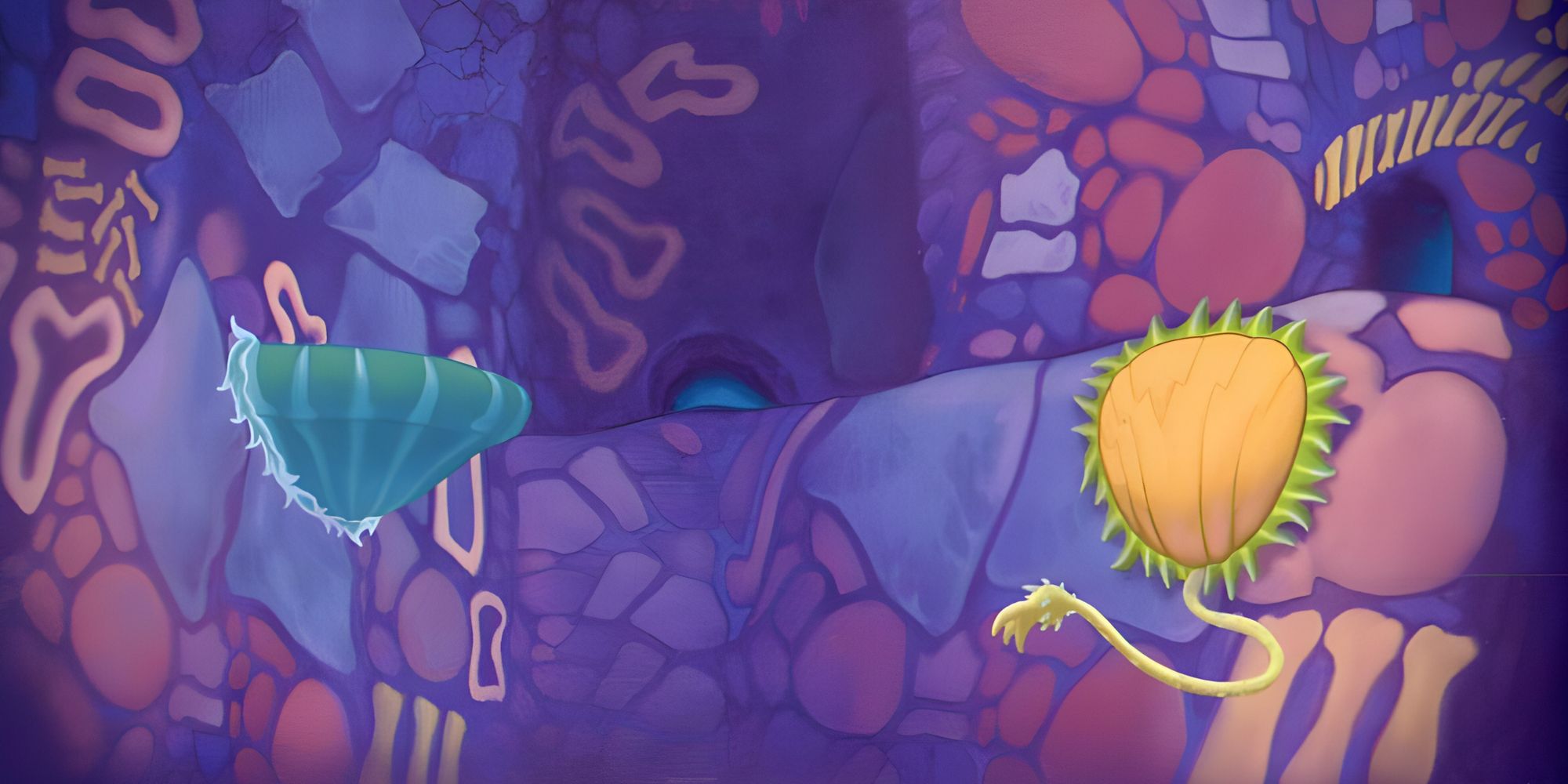 Okay, so Deep Jungle isn't the worst offender of getting you lost in Kingdom Hearts. That title goes to Monstro, where you're supposed to maneuver through the different chambers inside the giant whale's belly. The chambers aren't linked linearly, though, and everything looks even more similar than in Deep Jungle!

Add to that the enemies constantly appearing to distract you, and it'll be a while before you know exactly where you have to go. Going through Monstro while you're tired isn't recommended, because it can legitimately take a while to get the directions right and progress. 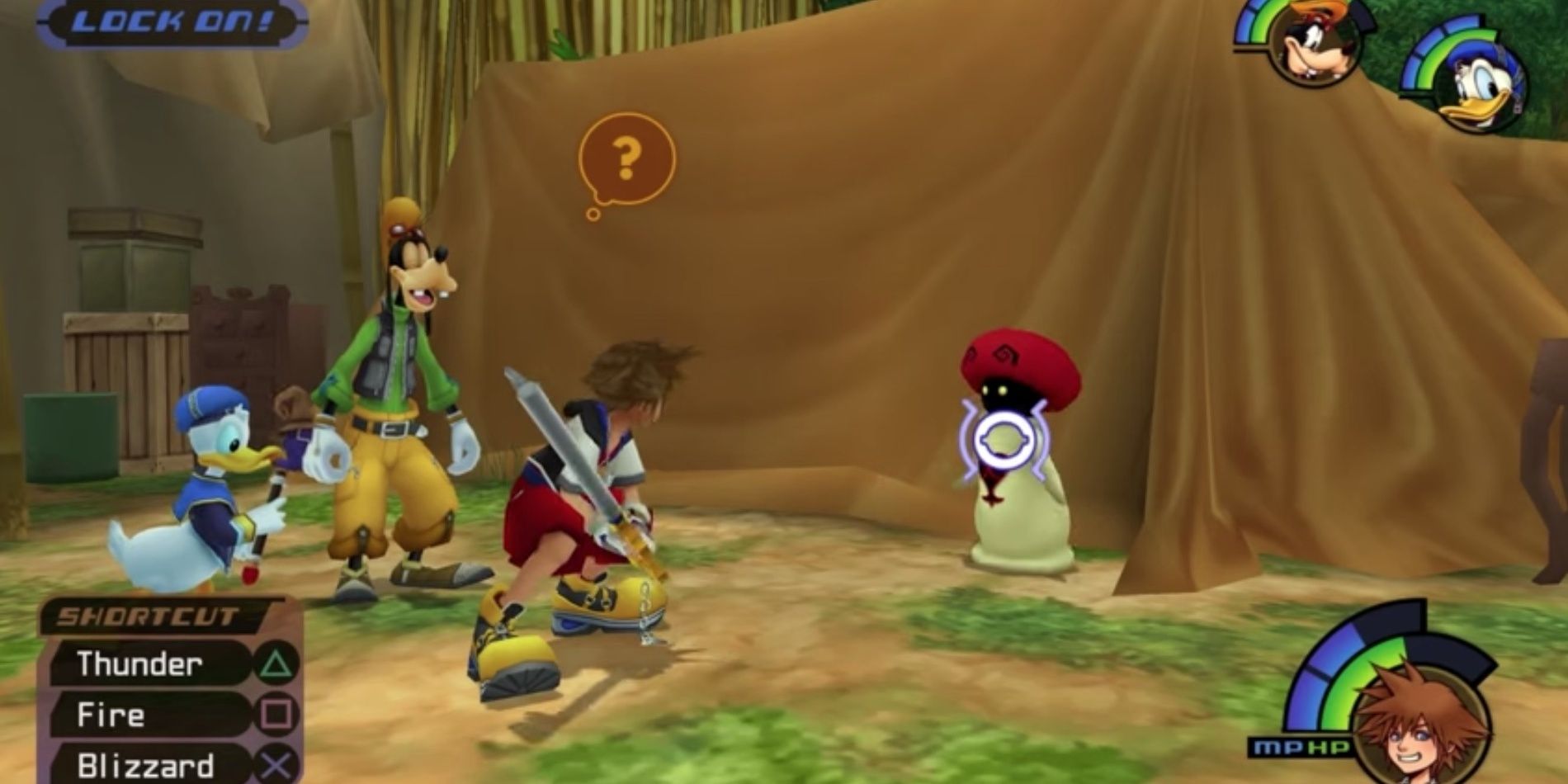 The White Mushrooms in Kingdom Hearts are adorable Heartless that'll never attack you, even if you attack them first. Instead, they'll stomp their feet angrily and disappear. Knowing what to do with them when you first encounter them can be confusing, since they don't hurt you but don't drop anything if you make them mad.

They have different animations, like shivering or fanning themselves, and that's your cue to cast specific Magic on them. If they're shivering, warm them up with Fire. If they're about to fly away, cast Gravity on them. Doing several in a row correctly will make them happy and reward you with MP bubbles and items. But even when you do know the tricks, casting too late will make them angry. 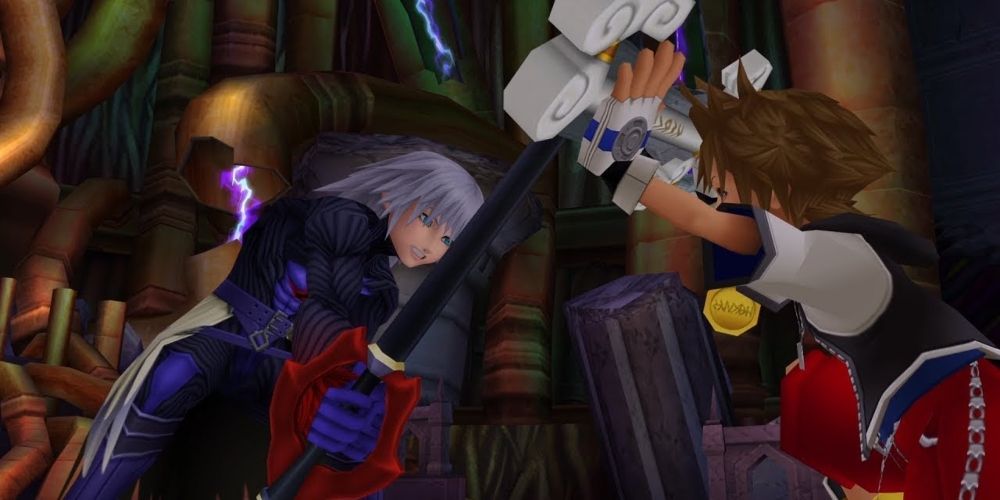 Riku isn't just tough to beat on Destiny Islands, but at least he was optional there. Fighting him in Hollow Bastion is a must. He's got some new dark powers that can obliterate you quickly if you're not careful. Donald and Goofy don't join you in this fight, so you can't rely on them to be decoys or heal you to take some pressure off you.

You have to juggle healing, dodging Riku-Ansem's constant attacks, and finding an opening to knock some of his HP off. He's an infamously tough fight that you'll probably lose a few times. What's more, if you played the PS2 version of Kingdom Hearts, there was no option to skip cutscenes, so you'd have to watch the entire scene before the fight every time you had to retry it.

2/10 Getting Jumpscared By Sephiroth's Theme 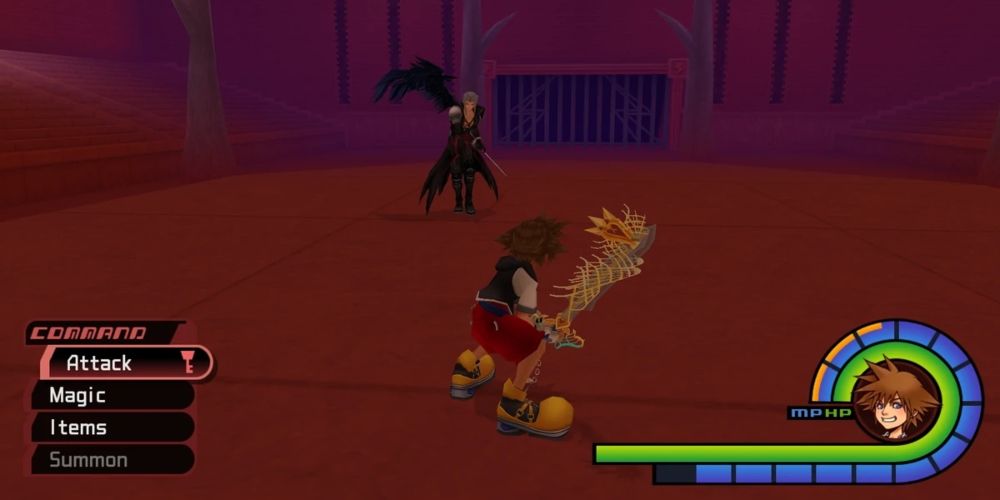 You have to go through some parts of Olympus Coliseum's arena to beat the world, but there are also optional opponents to beat and trophies to earn afterwards if you so choose. Some of these opponents are boss battles, like the Ice Titan or Leon and Yuffie.

However, the ultimate boss is Sephiroth, and he comes with his theme music, One-Winged Angel, which is especially terrifying when you're not expecting it. And if you're not expecting it, that means you're unprepared to fight him, because he's one of the hardest fights in the game. Beating him does give you the One-Winged Angel Keyblade, so that's neat if you're up for a challenge.

1/10 Grinding For The Ultima Weapon 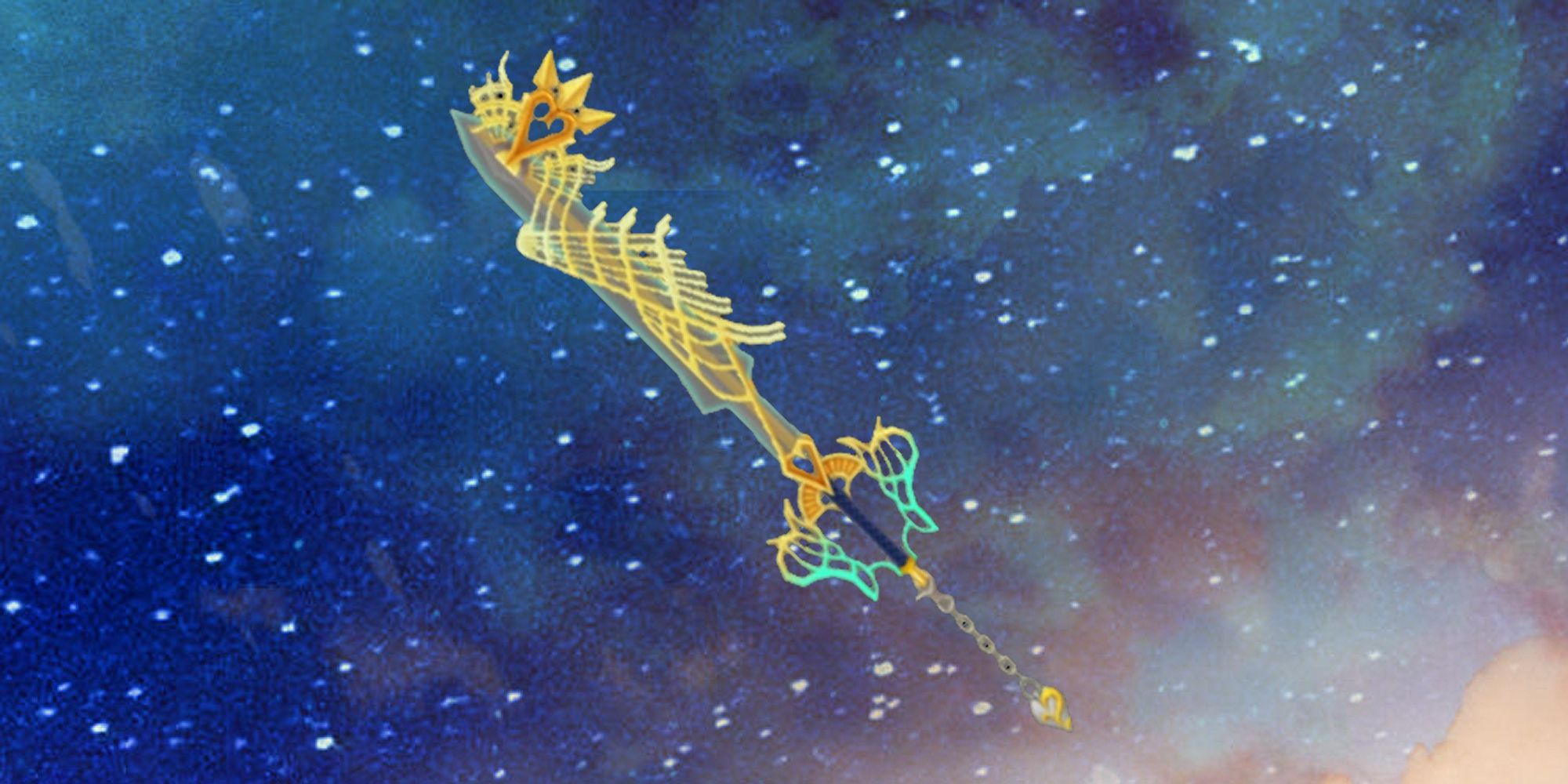 The Ultima Weapon is pretty much the best Keyblade in Kingdom Hearts, giving you a huge Strength boost and two extra MP. But being so good, it's not so easy to achieve. Unlike other Keyblades that you acquire, you have to synthesize this Keyblade at the Moogle Shop with certain ingredients.

The ingredients are dropped by different Heartless, so you'll be traveling from world to world and running back and forth between rooms to respawn the ones you need to defeat. Their chances of dropping the ingredients you need can be as low as four percent, so don't expect to finish gathering the items quickly.