I’m currently replaying Kingdom Hearts 3 for the first time since it launched in 2019. It’s the only Kingdom Hearts game I haven’t played through multiple times, and I feel like I owe it to the series that has meant so much to me to give it a second chance, since my first impression of Kingdom Hearts 3 was one of contempt. I have a lot of problems with Kingdom Hearts 3, which you can read all about in my debate with superfan George Foster. At the time, my chief complaints revolved around the game’s ‘style over substance’ approach to combat, an issue Kingdom Hearts has maintained, even beyond updates made in the Re:Mind expansion. I want to hop aboard the Kingdom Hearts 4 hype train with the rest of the fans, but I have a lot of trepidation about the direction the series is headed in. I hope the next game tones down the flashy commands, combos, and gimmicks and brings back the skillful combat that made me love Kingdom Hearts in the first place.

At the start of Kingdom Hearts 3, Sora has failed his Mark of Mastery exam and lost almost all of his power after nearly being taken by the darkness. If Sora is meant to be weaker here than he is in previous games, you wouldn’t know. During the prologue in Olympus, Sora can already unleash lengthy ground and air combos, dash around enemies effortlessly, and propel himself off walls and poles to unleash screen-clearing Flowmotion attacks. His magic may be the only thing noticeably weaker, since you only start with the base versions of Fire and Water. Other than that, Sora is practically in an end-game state right from the start, and only becomes more unstoppable from there.

There’s a ton of gimmicks at your immediate disposal in Kingdom Hearts 3. Flowmotion attacks let you deal massive AOE damage around you, Shotlock commands delete entire health bars, summons heal you and instantly clear entire waves, and the much-maligned attraction command is basically a free win button. On top of that you’ve got team attacks, formchanges, grand magic, and dive attacks. There’s an unbelievable amount of variety built into Kingdom Hearts 3’s combat, but unfortunately, it rarely ever leads to interesting decision making, risk-reward scenarios, or high-skill pay offs. 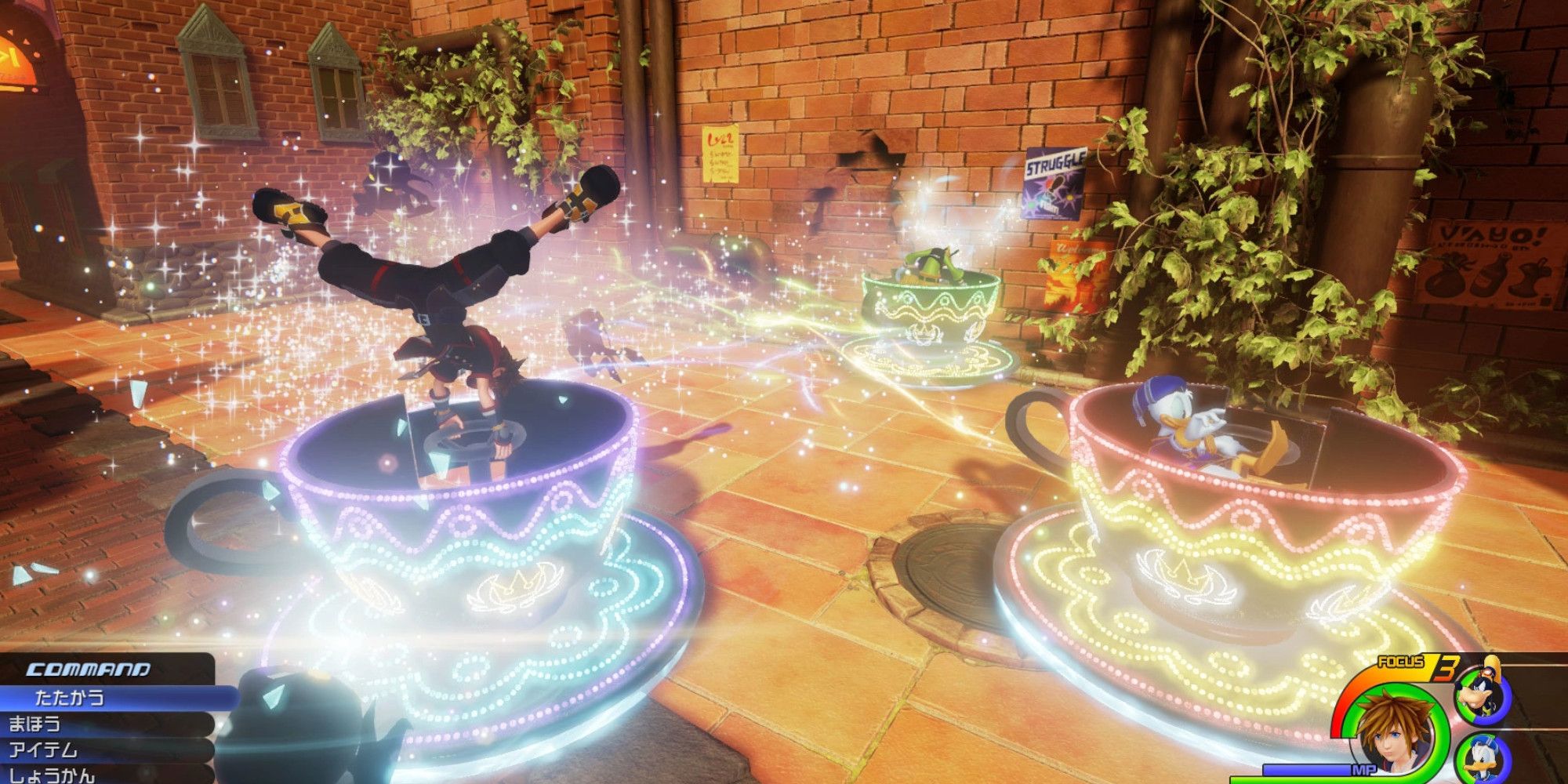 You can get through most of Kingdom Hearts 3, even on the higher difficulties, by closing your eyes and mashing the attack command. When you get bored of that, pressing the button to activate whatever situational command is available will usually clear whatever's left over. You’d think that with all those different abilities the context would matter, but that typically isn’t the case. You can use an attraction command, or a link summon, or a shotlock, or a team attack, and they’ll all essentially do the same thing. Almost every ability you unlock is performed automatically too, so you don’t even have to think about your combos either. Airstep is really the only ability beyond guard and dodge roll that feels like a meaningful part of your kit, as opposed to something that just happens when you mash the attack button.

Kingdom Hearts has become a purely visual spectacle, but it didn’t start out that way. The first two mainline entries were much slower paced, with tankier controls and far fewer gimmicks. There was weight behind every animation and using attacks required a certain level of commitment. Earning new abilities had a big impact on the way you approached combat, and you had to utilize every tool at your disposal to emerge victorious. Even choosing the right summon was highly dependent on the type of fight you were in. Kingdom Hearts 3 traded all of that for mid-fight cutscenes and particle effects, to the detriment of the gameplay.

The Kingdom Hearts 4 trailer is full spectacle, as a reveal trailer should be, but I hope the dev team has been able to take a step back and assess what worked in Kingdom Hearts 3 and what didn’t. Things can either continue in the same direction, with even more gimmicks and extravagant abilities, or it can slow things down and focus on what made Kingdom Hearts’ combat great in the first place. Despite the expectations of being a ‘next-gen experience’, I just want a more grounded, purposeful experience from Kingdom Hearts 4. Bigger isn’t always better, after all.