Lost Ark is a surprisingly complex game. Dozens of activities, multiple progression systems, and mountains of content will keep players busy for hours on end. It's also the perfect storm for confusing newer players as to how certain systems work. Strongholds are a perfect example.

Strongholds—known as Estates in some versions of Lost Ark—act as a progression system, crafting system, and player housing all at once. If you're someone who saw the stronghold system and immediately disregarded it, we don't blame you. But we do recommend you invest in this system. Strongholds let you craft endgame consumables, level your characters, and much more. Here is a complete guide to Lost Ark's stronghold system. 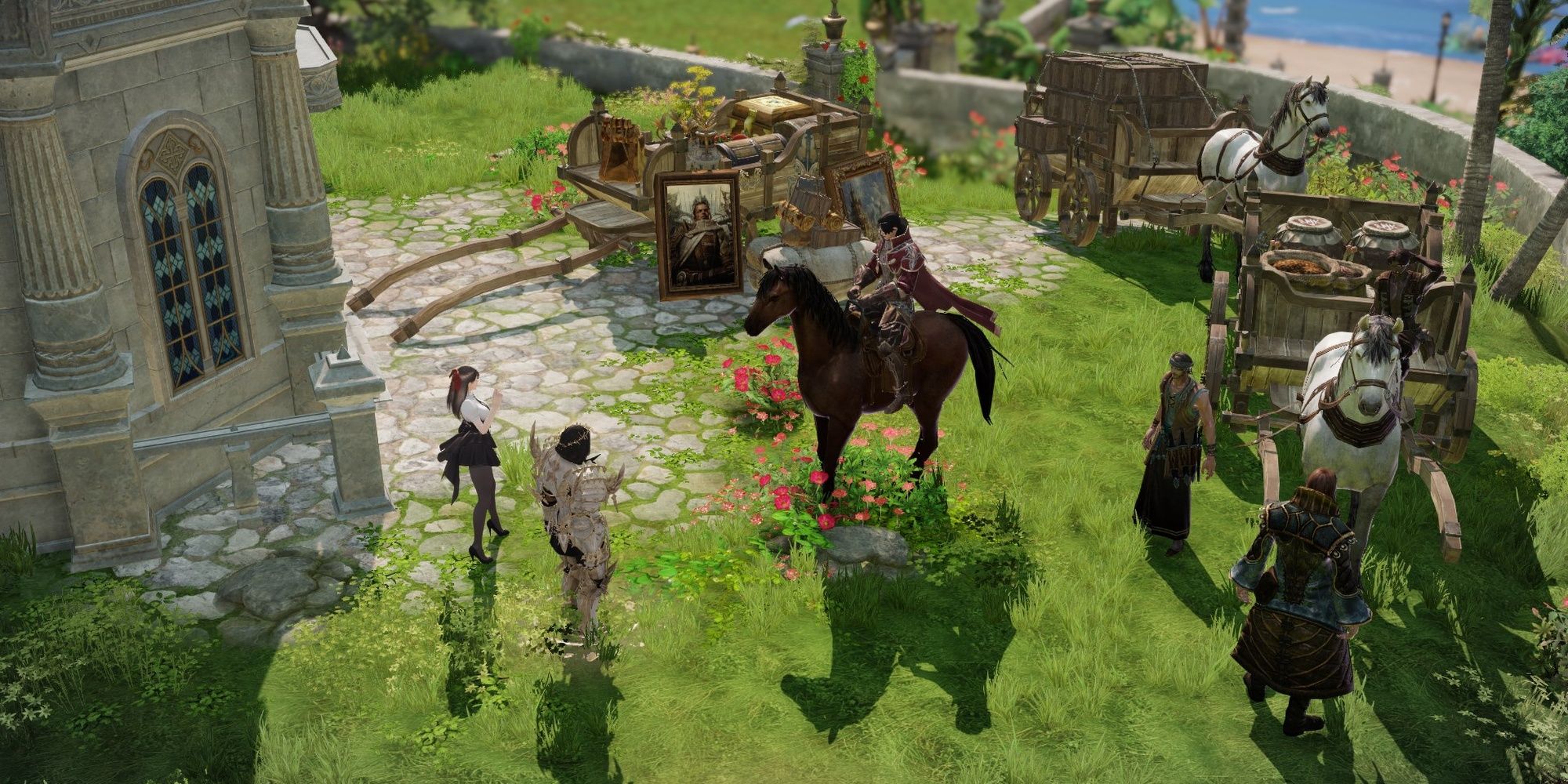 Strongholds double as Lost Ark's player housing and item crafting systems. Unlocked at around level 25, your stronghold acts as a base of operations for crafting, researching new tools, and completing daily activities. You can decorate and reside in your stronghold like other MMO houses, but Lost Ark's strongholds offer much more than that.

The main use of your stronghold is crafting healing potions and battle items for the endgame. If you don't want to spend thousands of Gold purchasing consumables from other players, you'll need to invest in your stronghold. You get plenty of other benefits for doing so, such as unlocking the ability to passively complete daily activities and boost alternate characters to level 50. 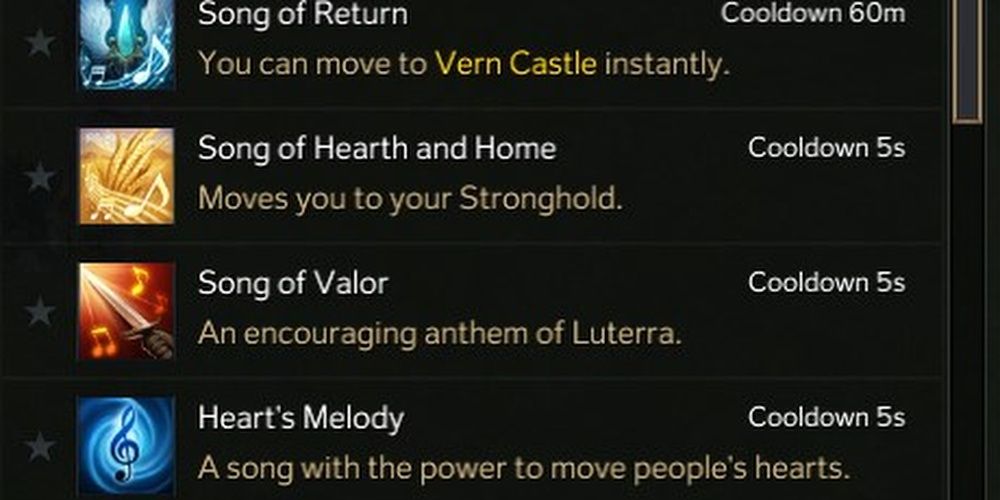 You will be given a stronghold after completing the "Clerk Theo's Invitation" quest. You'll unlock this quest upon retaking Luterra Castle, an event that occurs during the main story around level 25. Complete the quest chain to unlock your estate and its associated fast-travel song.

Even with your stronghold unlocked, it won't be at its full potential. Additional features for your estate are unlocked by completing quests obtained from your stronghold, finishing research projects, and increasing the rank of your stronghold. 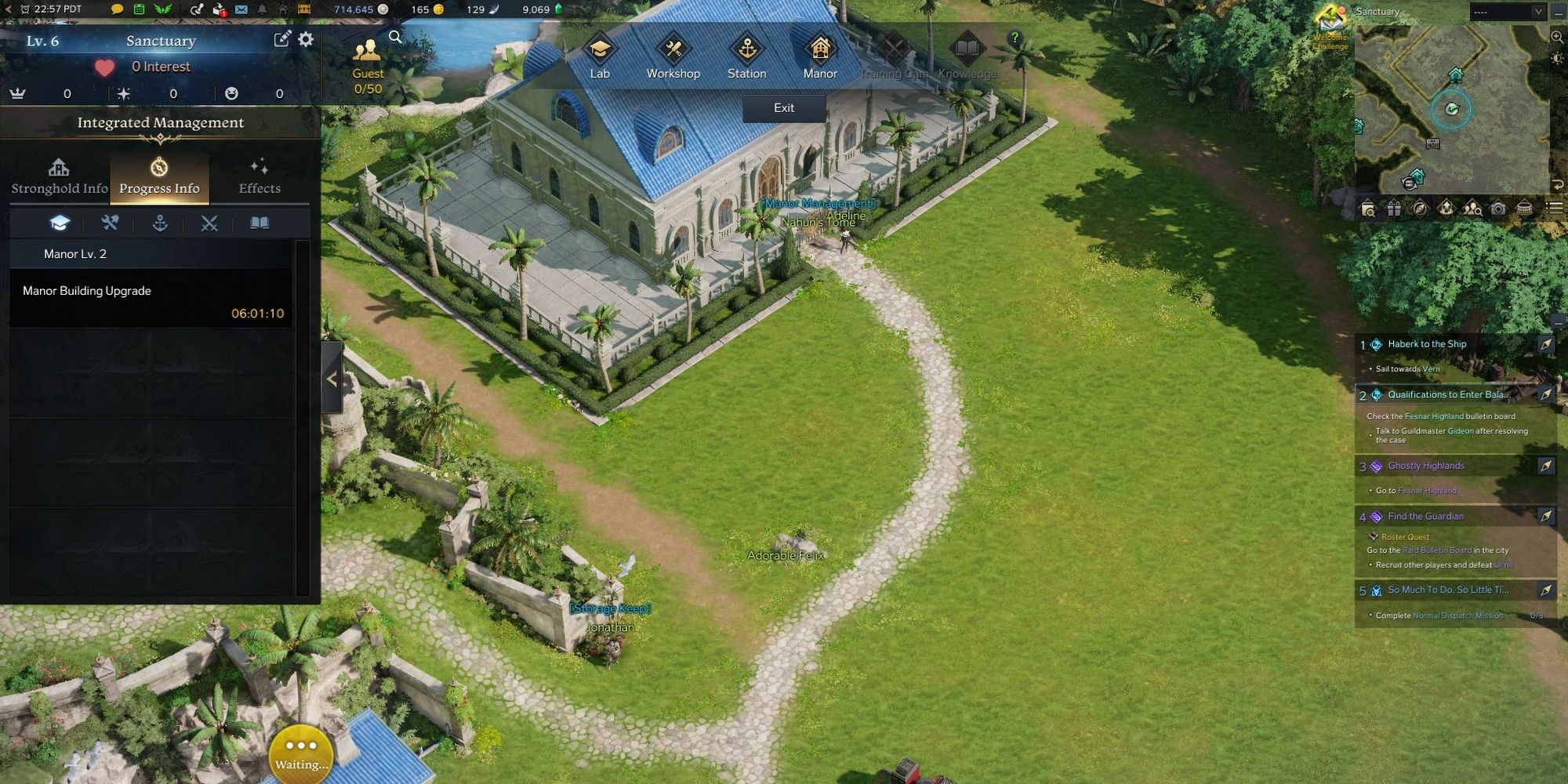 To access your stronghold, enter your music sheet menu (F2 by default). Use the "Song of Hearth and Home" to teleport to your stronghold. You can wander around your estate to access its various structures and features, but there's a faster way: press Ctrl + 1. This will open a menu that will let you access all of the important features of your stronghold through a series of menus. For decorating your estate, press Ctrl + 2.

While in the management menu, you can access the following:

Let's break down what each menu does before we continue. 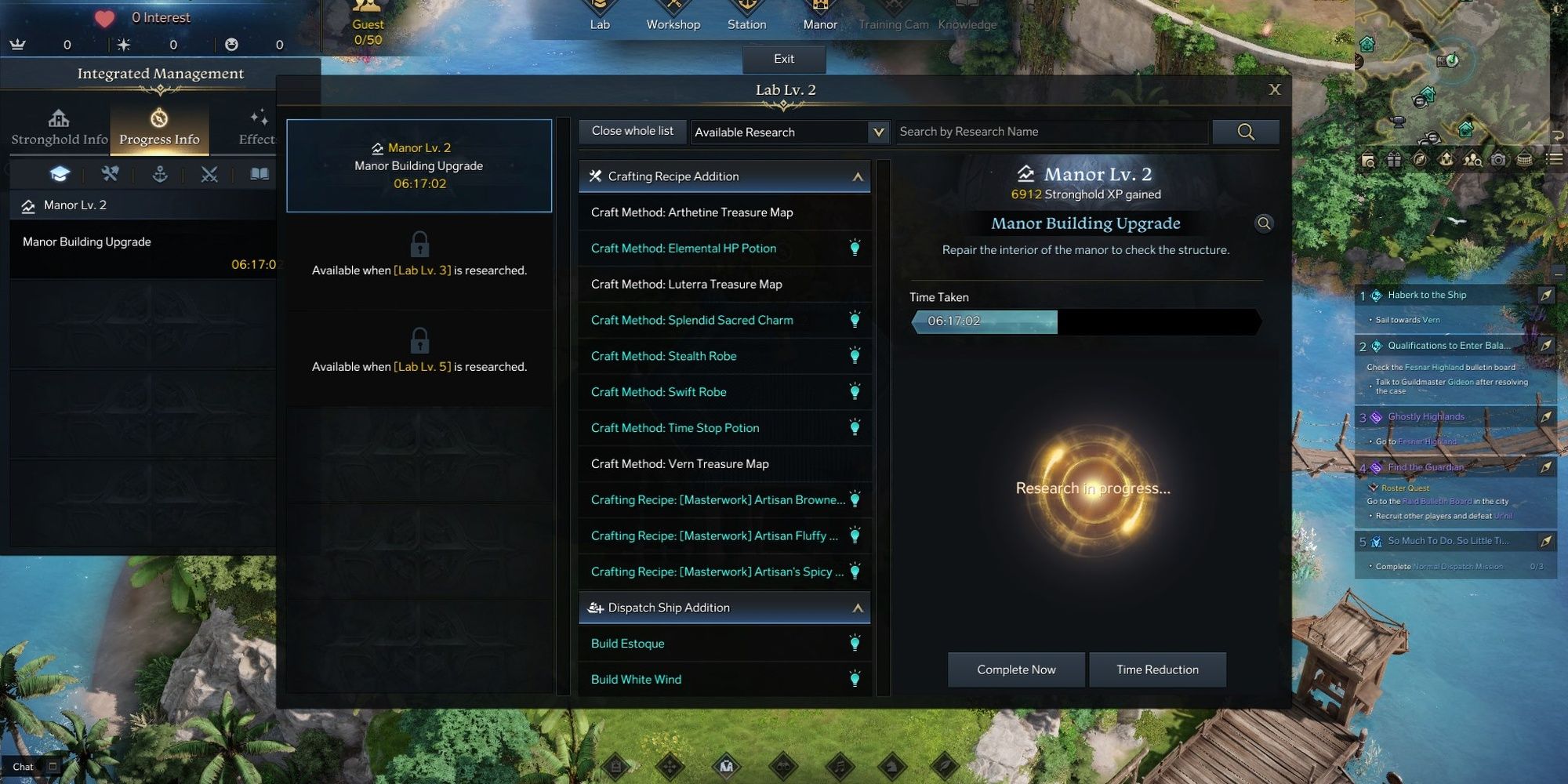 The lab is used to unlock new features for your stronghold. Unlocking new recipes for the workshop, upgrading parts of the stronghold, and unlocking new ship types can all be done from the lab. Research projects take multiple hours to complete and typically require ore and wood. 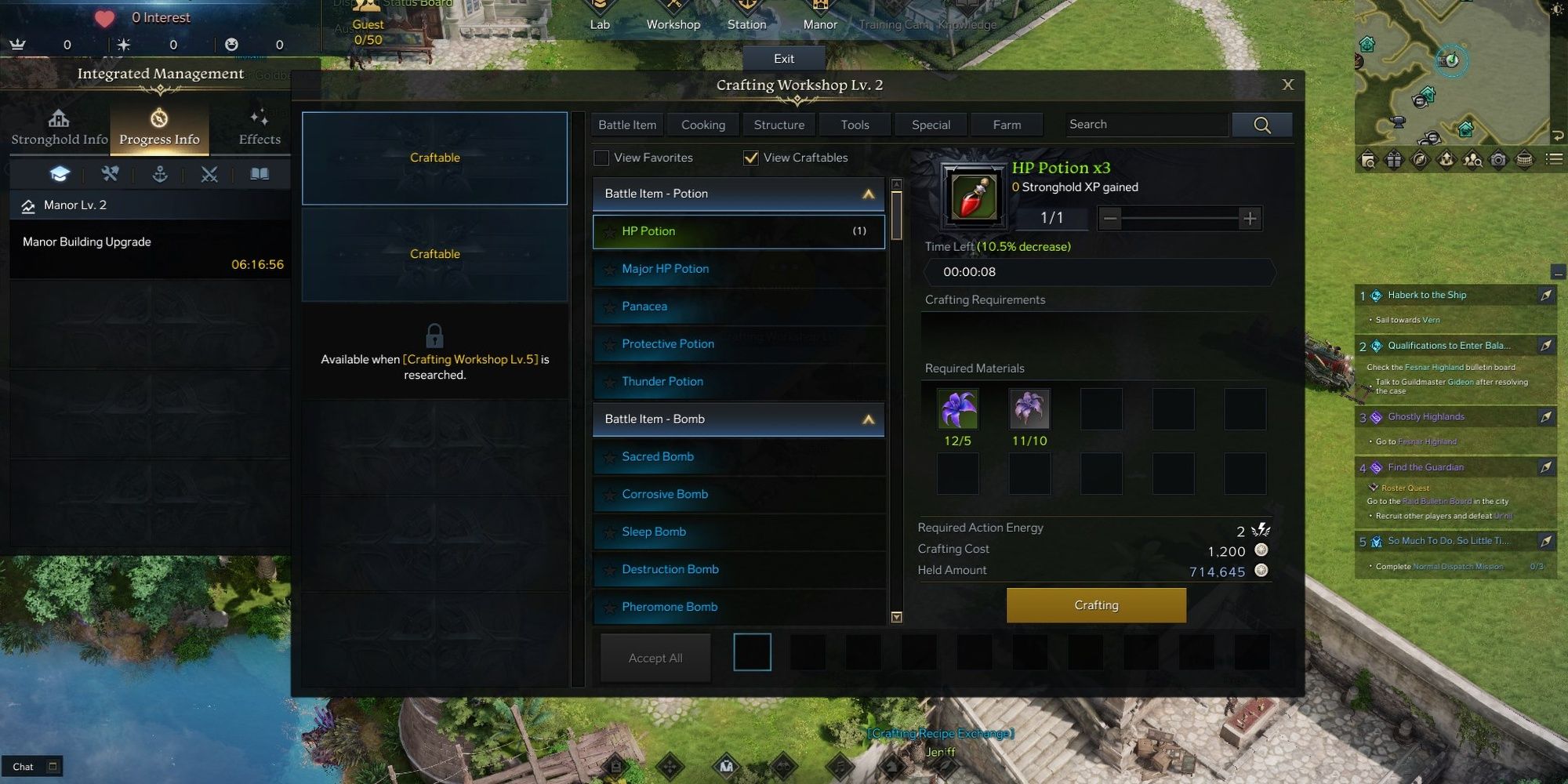 Workshops are used to craft new items to use in the endgame. HP potions, battle items, tools, and cosmetic items for your stronghold are all crafted from here. To unlock more recipes for your workshop, research workshop upgrades using your lab. Just about all trade skill materials are used in this menu. 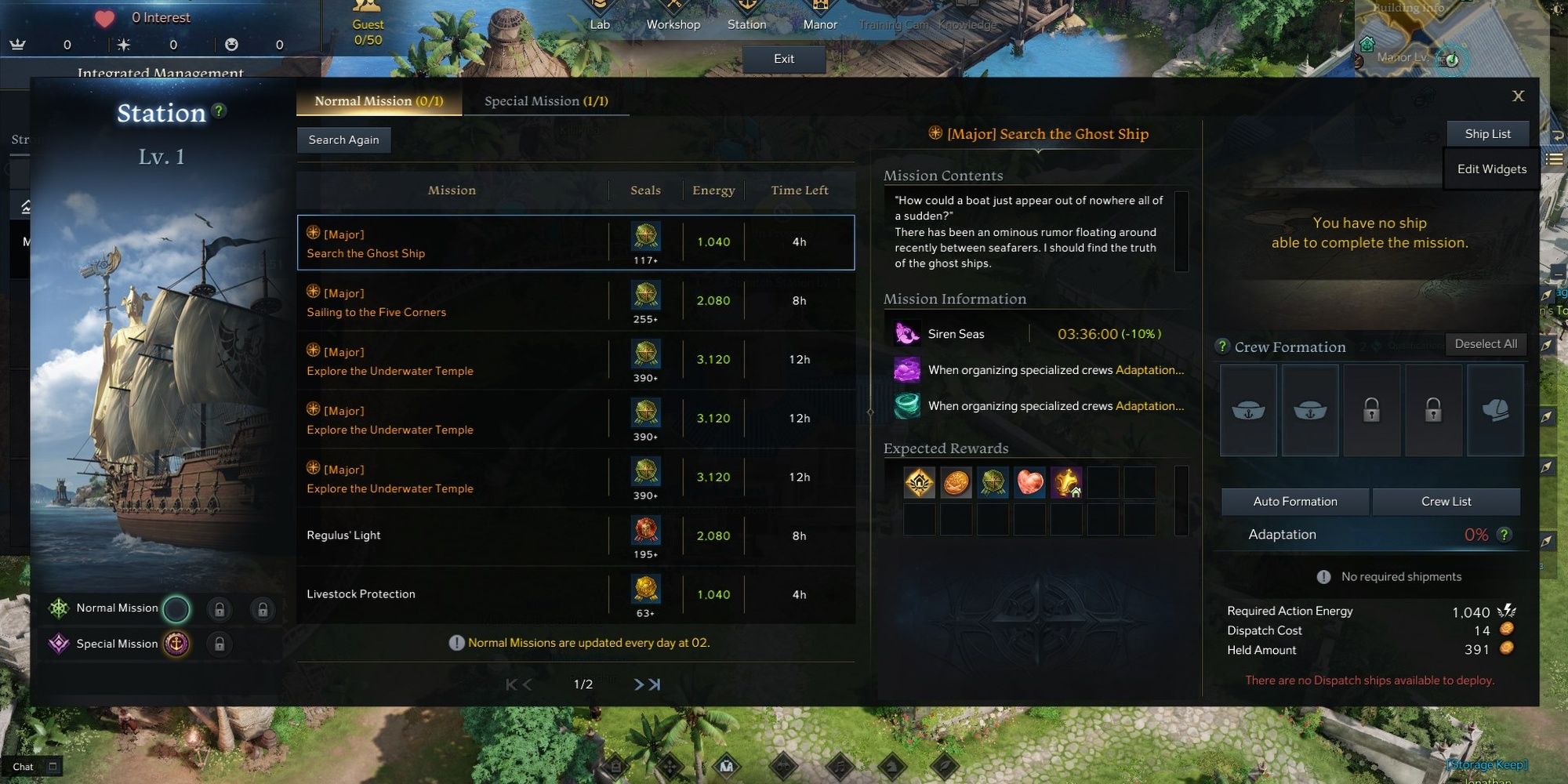 Once you unlock a ship, you'll be able to allocate crew members to complete certain missions. These missions offer currencies for your stronghold, upgrade materials, and even rewards granted from Chaos Dungeons and Guardian Raids (explained in the Additional Stronghold Features section). 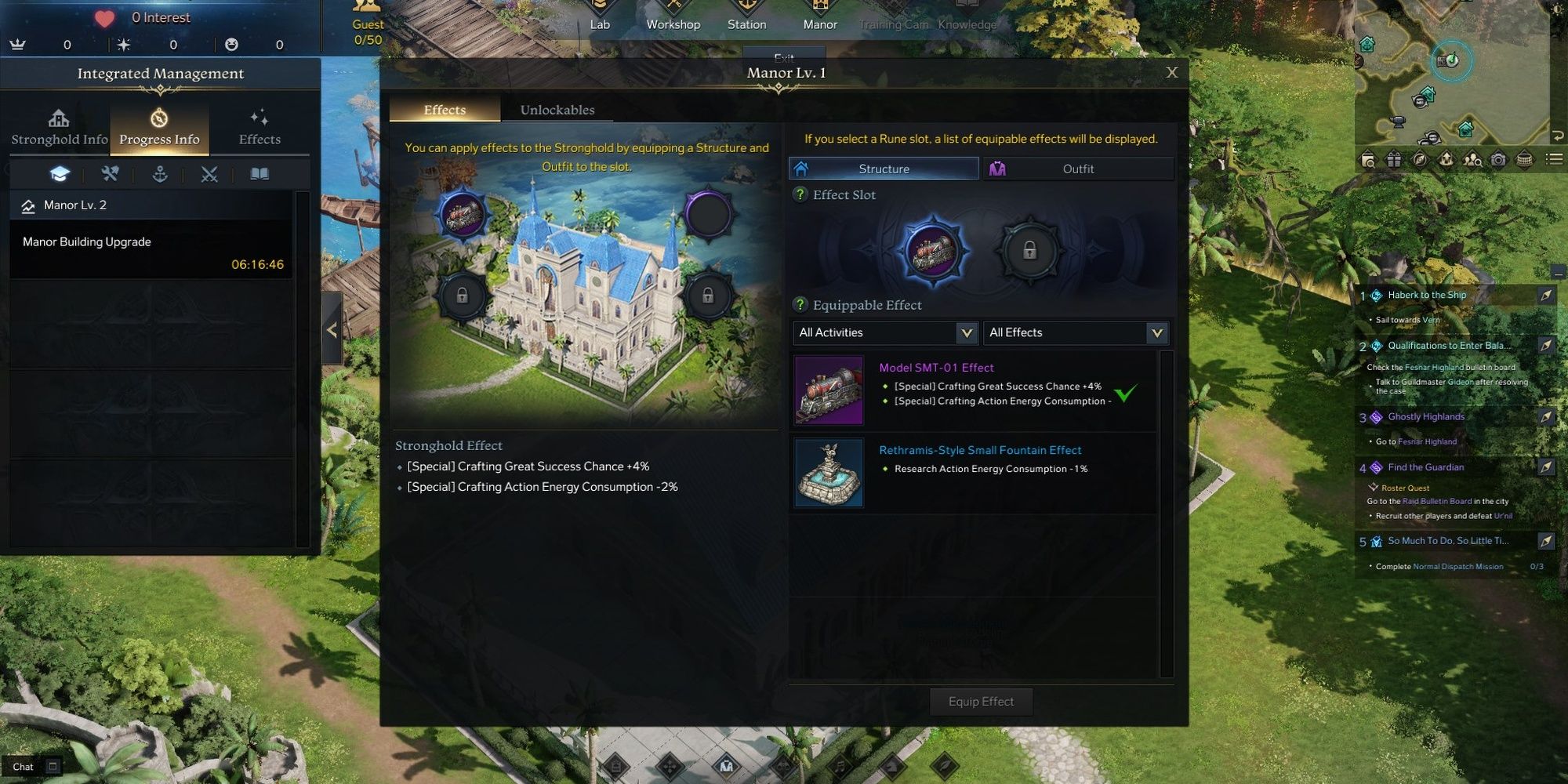 You can create certain structures in your stronghold that grant a passive effect. This menu is used to allocate which passives you want active at any given moment. For example, platinum founders received a train cosmetic that grants passive crafting bonuses for your stronghold.

Unlocked upon reaching level 52, the training camp allows you to passively increase the level of your characters. You can only level your characters up to two levels behind your highest level character. For example, if you have a level 60 character, you can only level your alts to level 58 through this system. Leveling characters through the training camp takes multiple days or even weeks to accomplish, depending on the character's current level and your max level. You can still use characters that are actively training, so this is a free XP farm.

This is effectively a better training camp. After completing the "Nothing is Impossible for Cykins" quest, you'll be able to spend 600 Gold to boost any character to level 50. This process takes eight hours to complete.

How To Upgrade And Level Your Stronghold 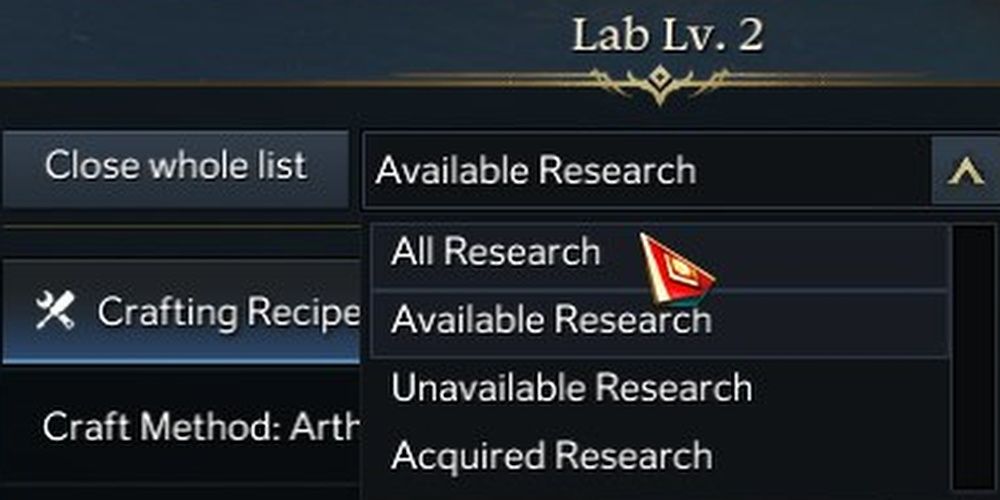 You can view the prerequisites of every stronghold upgrade by selecting "All Research" in the drop-down menu atop the Lab UI. For workshops, untick the "View Craftable" box to see every recipe.

Just like your characters, strongholds also have a level associated with them. You earn stronghold XP by, you guessed it, using your stronghold. Researching, crafting, and sending crew members on expeditions all grant stronghold XP. By far the best way to level your stronghold is by completing station missions, so be sure that one is always active whenever you're playing Lost Ark. 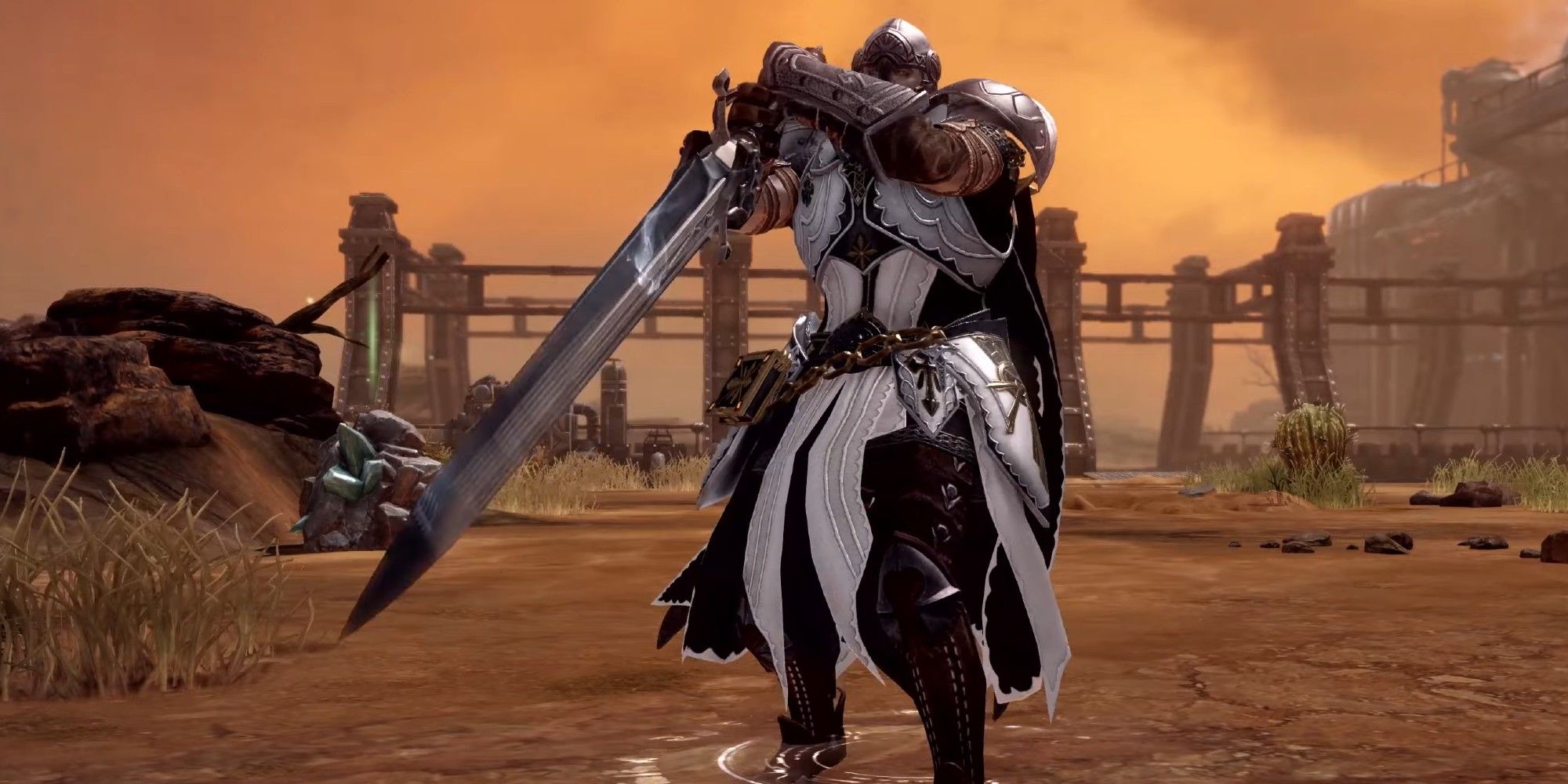 Anyone who's dabbled with strongholds will know that virtually every feature tied to this system requires trade skill materials—ores, wood, plants, and food. If you want to use your stronghold at all, you'll need to frequently use your trade skills. As a quick fresher, trade skills revolve around gathering materials in Lost Ark. While out in the world, press "B" to swap to your trade skill tools. Harvesting ore, flowers, and wood all count as using your trade skills.

You can only harvest so many resources each day, denoted by your work energy bar (present while using trade skill tools). This resource passively regenerates over time and differs from your Stronghold's action energy.

Each material you harvest has a small chance of granting uncommon and rare varieties used in more exotic recipes. For those who just unlocked their estate and need a kickstart of materials, we'll briefly mention some good spots you can find in Luterra—Lost Ark's starter continent. 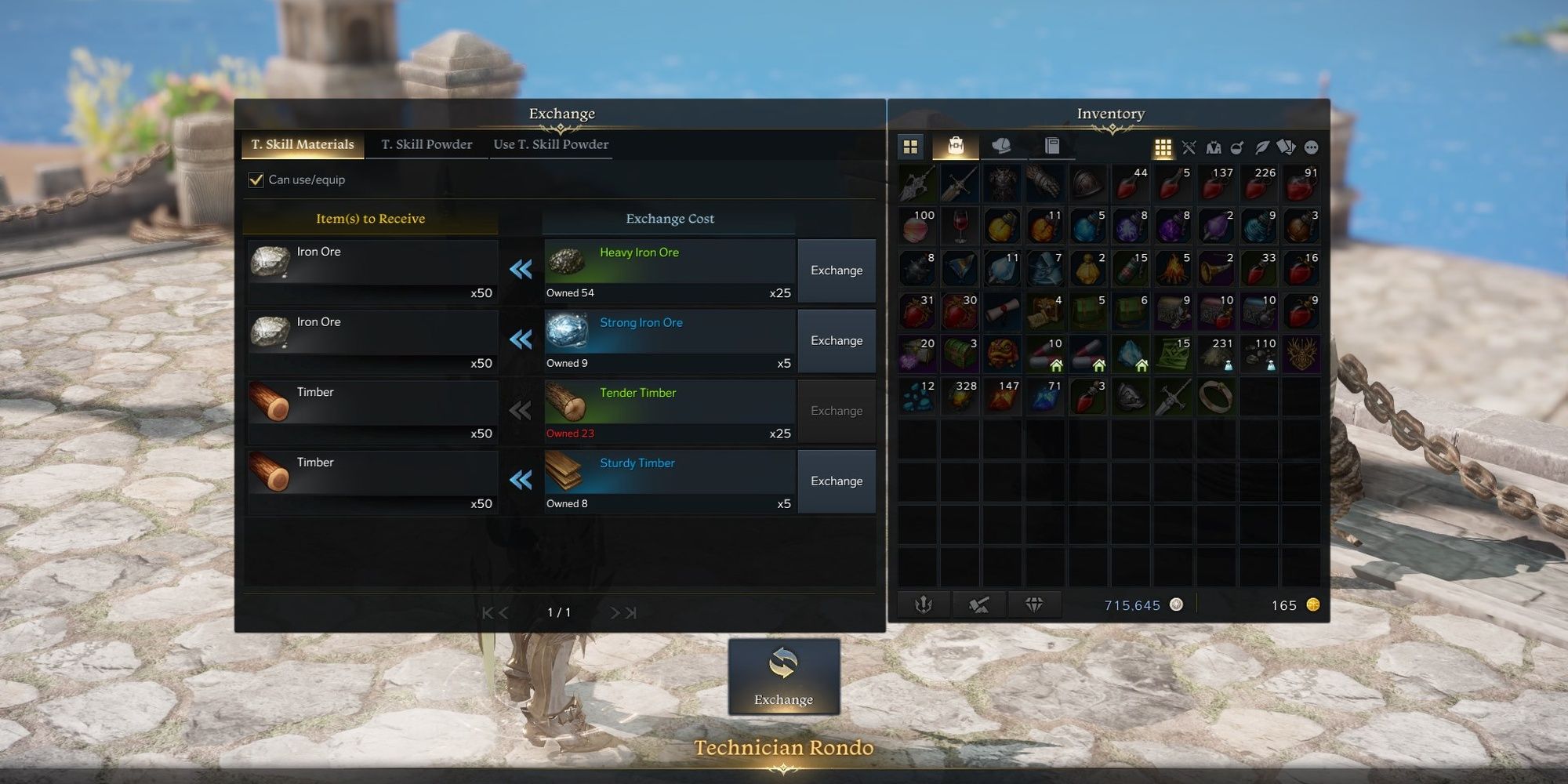 If you are sitting on a lump of exotic materials and want to progress your stronghold quickly, there is an exchange merchant near the spawn point of your island that will convert rare materials into common variants. You can find them right beside your island's rotating trade merchant. You can also exchange seals earned from crew missions in this area, although the conversion rate isn't one-to-one. 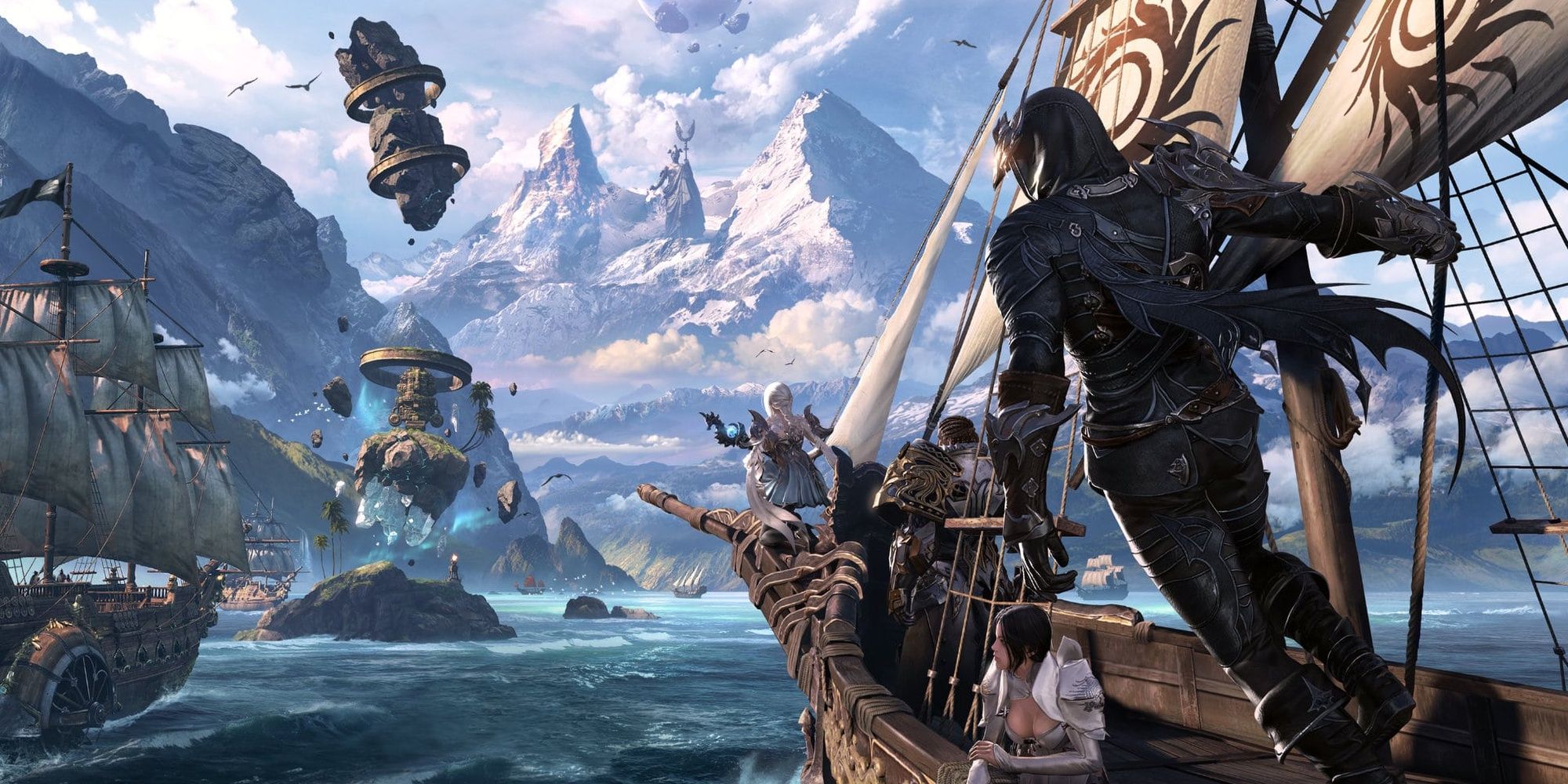 We've covered the essentials of your stronghold thus far, yet your player home can offer even more services and goods with enough investment. Let's quickly go over some features that unlock in your stronghold as you increase its level and complete certain research projects.

Trade merchants are temporary vendors that offer unique goods. These vendors can exchange seals obtained from station missions into rare materials, crafting recipes, collectible items, and even new crew members for your ship. Vendors rotate in and out of your stronghold, so be sure to check your stronghold daily to see what's in stock.

Upon completing the "A Verdant Land" stronghold quest, you'll unlock a portal that'll lead to a dedicated resource farm aboard your stronghold. This island will grow trade skill materials for you to harvest each day, although there's a major caveat: you cannot trade or sell materials earned from this farm. You can only use them for crafting. This island also grows unique resources used for crafting chest bundles in your workshop. Items you craft with these resources can be traded with other players.

This feature is present in the KR version of Lost Ark and might not be in the NA/EU version. We'll update this article once we have more information on this mechanic.

In the Korean client, strongholds can eventually gain access to a pet ranch that allows you to turn excess pets into resource farmers. You can select up to four pets to work in your ranch, creating cookies over time. These cookies can be redeemed to a vendor to upgrade your pets or obtain new pets entirely. With how pets have changed between the KR and NA versions of Lost Ark, this system isn't quite as useful, provided it was carried over between versions.

Leveling Characters With The Stronghold 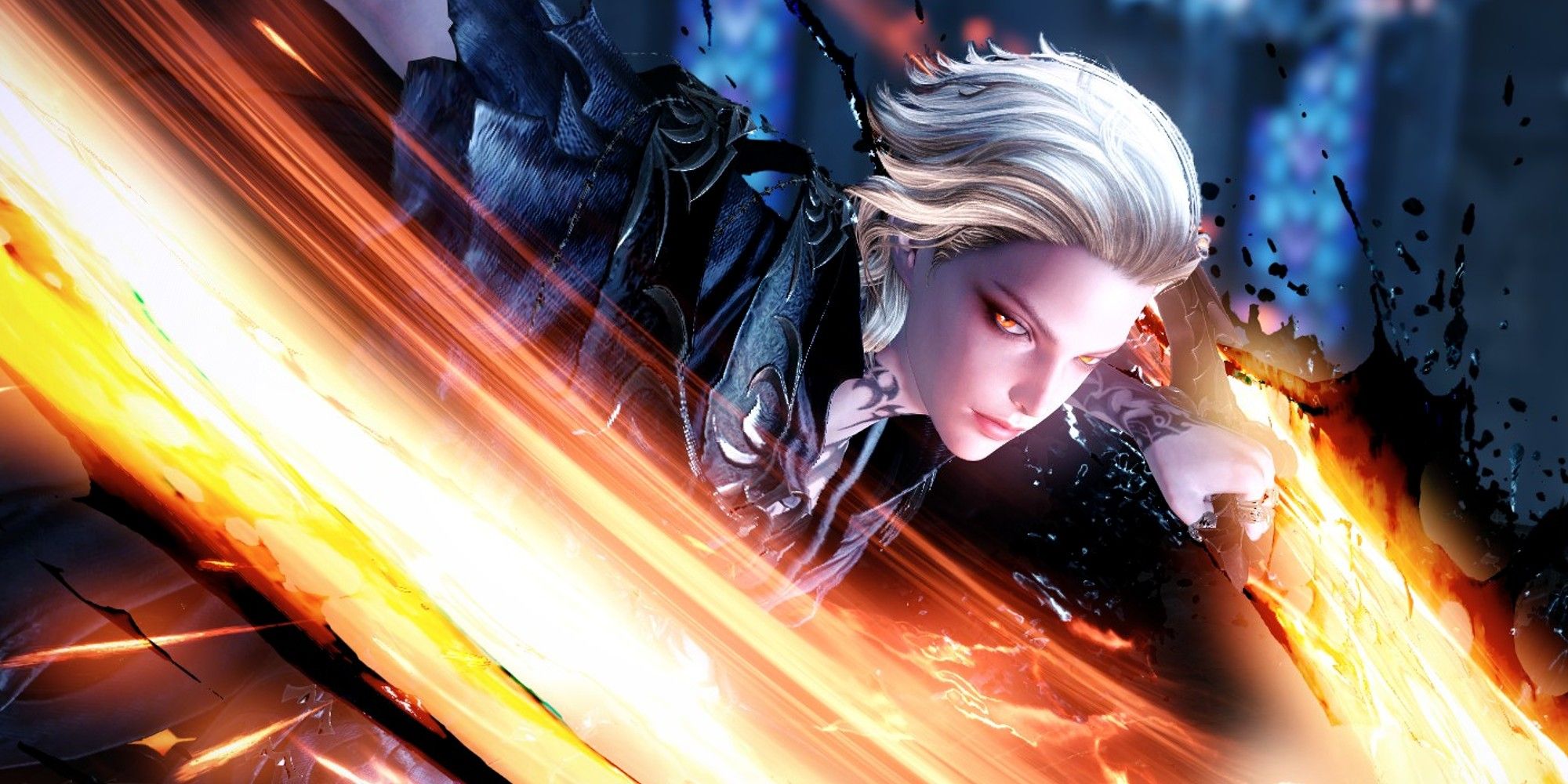 We mentioned this earlier in the guide, but this mechanic is so powerful that it warrants its own section. Through the training camp and knowledge transfer menus, you can bypass leveling your alternate characters entirely. This differs from the Powerpass available upon reaching level 50; this feature doesn't have limited uses.

The training camp is unlocked upon reaching level 52 with any character. This system allows you to raise the level of your alternate characters for free. You can only raise your alts to two under your max level with this method, but this doesn't cost Gold. You can still play characters that are actively using the training camp, so be sure to take advantage of this feature.

Knowledge transfer is a fairly new feature added to Lost Ark that allows you to boost any character to level 50. Players can unlock this system by completing the "Nothing is Impossible for Cykins" quest. Unlike the training camp, this costs 600 Gold and takes eight hours to complete. Gold is a valuable resource in the endgame, so we don't recommend you use this system until you have a steady stream of Gold. Once you do, this is a great way to expand your character roster. 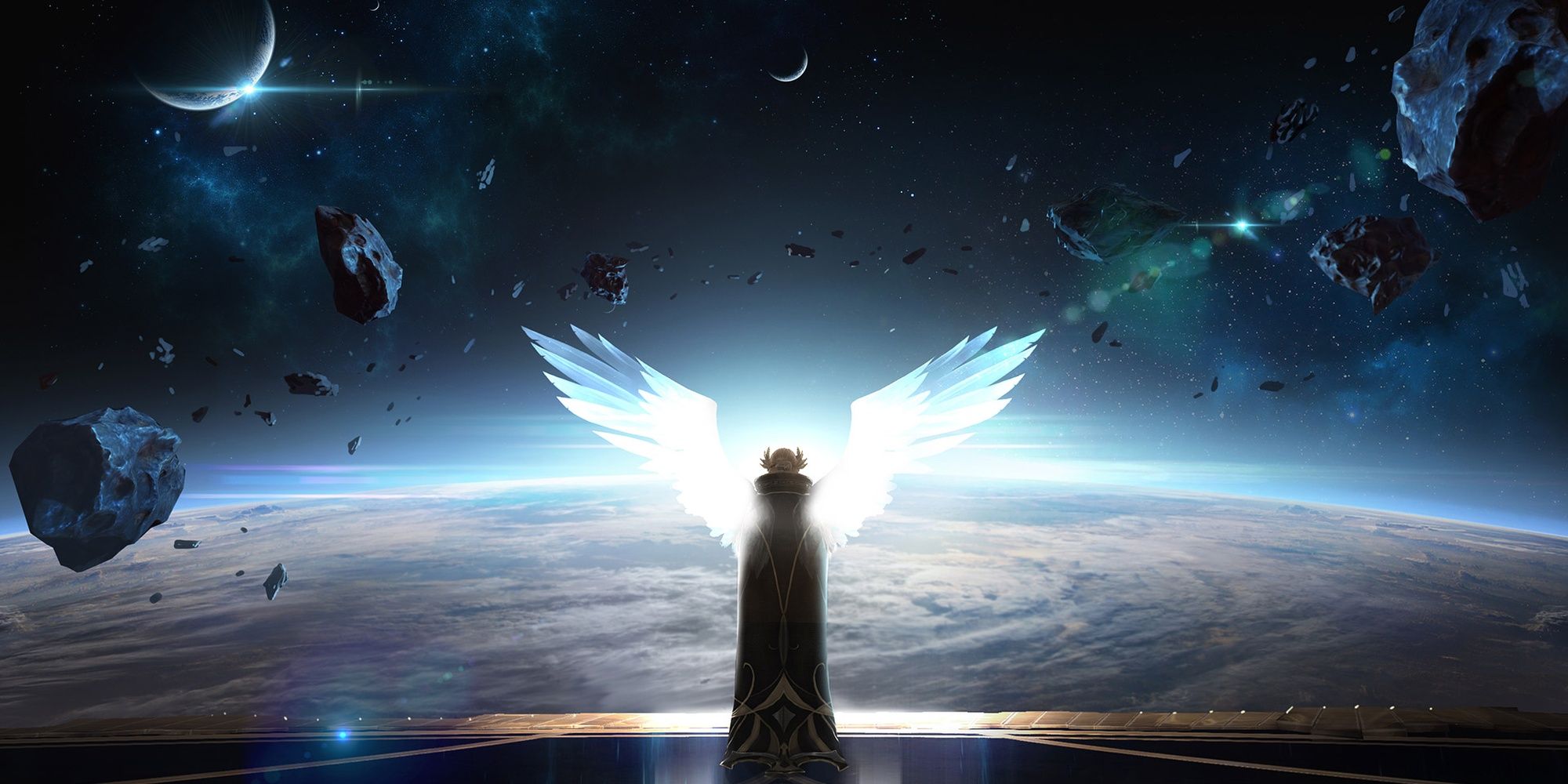