Lost Ark's newest update adds three weekly Challenge Guardian Raids where you can turn into a beer or chicken – yes, a beer or chicken – to fight off Chickings, all on the new Wild Wings Island. These "crispy golden Chickings" are leading a raid and the quicker you fend them off, the more coins you'll earn.

The plot gets a little morbid as it turns out these Chickings are "seeking revenge for eating their friends and family", essentially hunting us all down for munching on one too many KFC family buckets. But you don't have to fend off the vengeful chickens by yourself—you can rope in some friends and stop the uprising together.

As for turning into a "beer", not much is said about that in the blog post. There's no rhyme or reason, no ties to the chicken uprising, and no hint of it being a typo. You can turn into "a chicken or beer" like it's a completely normal turn of phrase. But aside from that odd tidbit, there are new guild activities, a new class, a new Guardian Raid, a new Legion Raid, and more. 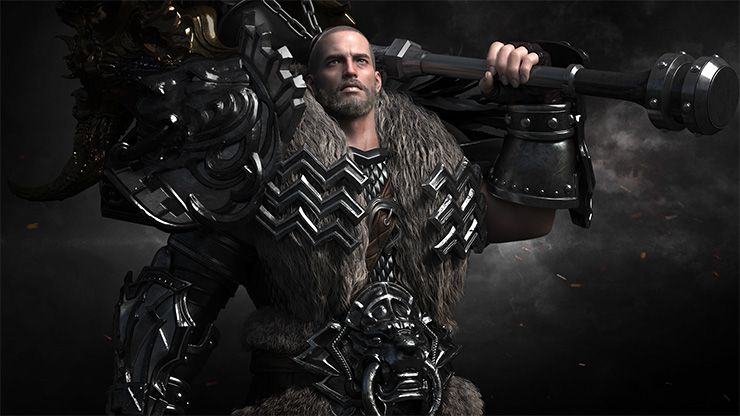 The Destroyer is a hammer-wielding class that can launch, push, slow, and pull enemies, to completely shatter anyone who stands in their way. They deal "massive stagger damage", making them a big help to any party. They're joining the Berserker, Paladin, and Gunlancer as the "fourth Warrior Advanced Class."

Then there's Valtan, the new and first Legion Raid, as well as Deskaluda, the new Guardian Raid. The former tasks you to take down Legion Commanders in teams of eight, with an item level of at least 1415 to try normal difficulty, and 1445 for hard. It brings with it a new gear rarity, Relic, and the materials you need to craft Relic gear drops during the raid.

Then there's the Guardian Raid. Deskaluda similarly requires an item level of 1415 to attempt, but you can take this boss on alone if you don't fancy joining up with a party of at least three others. And like the new Legion Raid, you can get new Relic quality accessories from taking them down.

Finally, Lost Ark has added Island Siege, a new PvP guild activity, and Raid Match, allowing you to enter a base with your guild to fight Sylmael Devourer, all in a bid to up your ranking.