Previous deck: Satoru Umezawa // Next deck: Check back next week!

On Magic The Gathering's plane of Kamigawa, reverence for the Kami is a key part of life. Way back in the olden days, Shrines were erected to honour the Myojin, the five most powerful Kami. By the time of Kamigawa: Neon Dynasty, the Shrines themselves have come to life, becoming Kami in their own regard.

Shrines are one of the most interesting permanent types in Magic, as they encourage you to run as many colours as you can to snowball your opponent with a ridiculous number of scalable triggers. With Neon Dynasty, we were finally given a commander just for Shrine, so it's time to erect as many as we can to swamp our opponents under a wave of sheer value. This week, we're building Go-Shintai of Life's Origin. 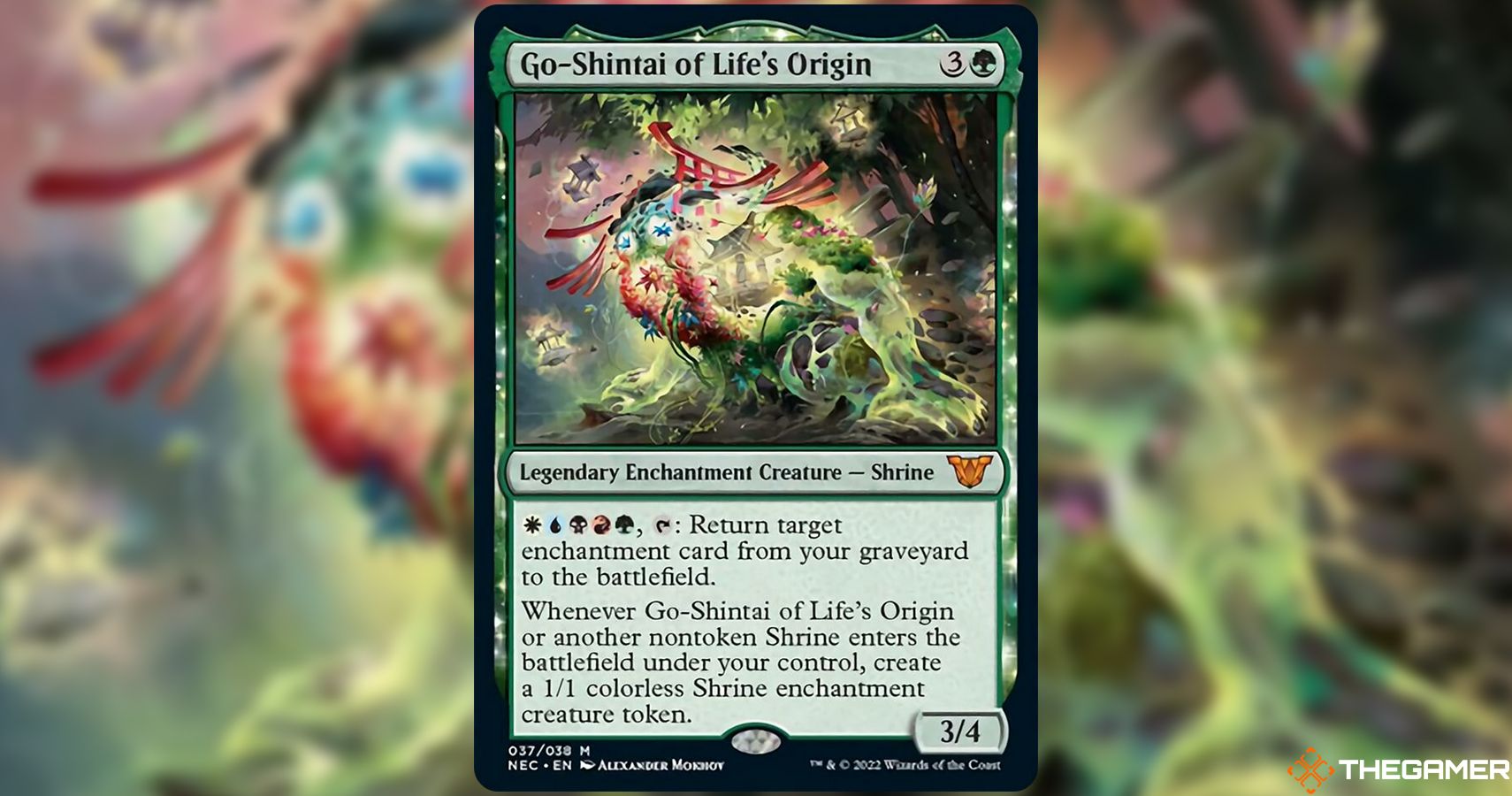 Go-Shintai of Life's Origin is a 3/4 Legendary Enchantment Creature that costs one green and three white. However, it has an activated ability that allows you to pay one white, blue, black, red, and green to return an enchantment from your graveyard to the battlefield, making it a WUBRG Commander.

With the introduction of the Go-Shintai in Kamigawa: Neon Dynasty, many people were excited to see what they thought was 'Shrine' becoming a valid creature type. Think of all the changelings you could use to supercharge a Shrine deck! Unfortunately, that isn't the case: Shrine is listed as an enchantment type, not a creature type in the rules. The Go-Shintais don't have any creature type, joining a very elusive club previously only occupied by Nameless Race.

Life's Origin also has an impressive triggered ability: whenever a non-token Shrine enters the battlefield, you create a 1/1 colourless Shrine enchantment creature token. Considering the whole point of Shrine cards is they scale up with each extra Shrine you control, these will be a great way to maximise our triggers. 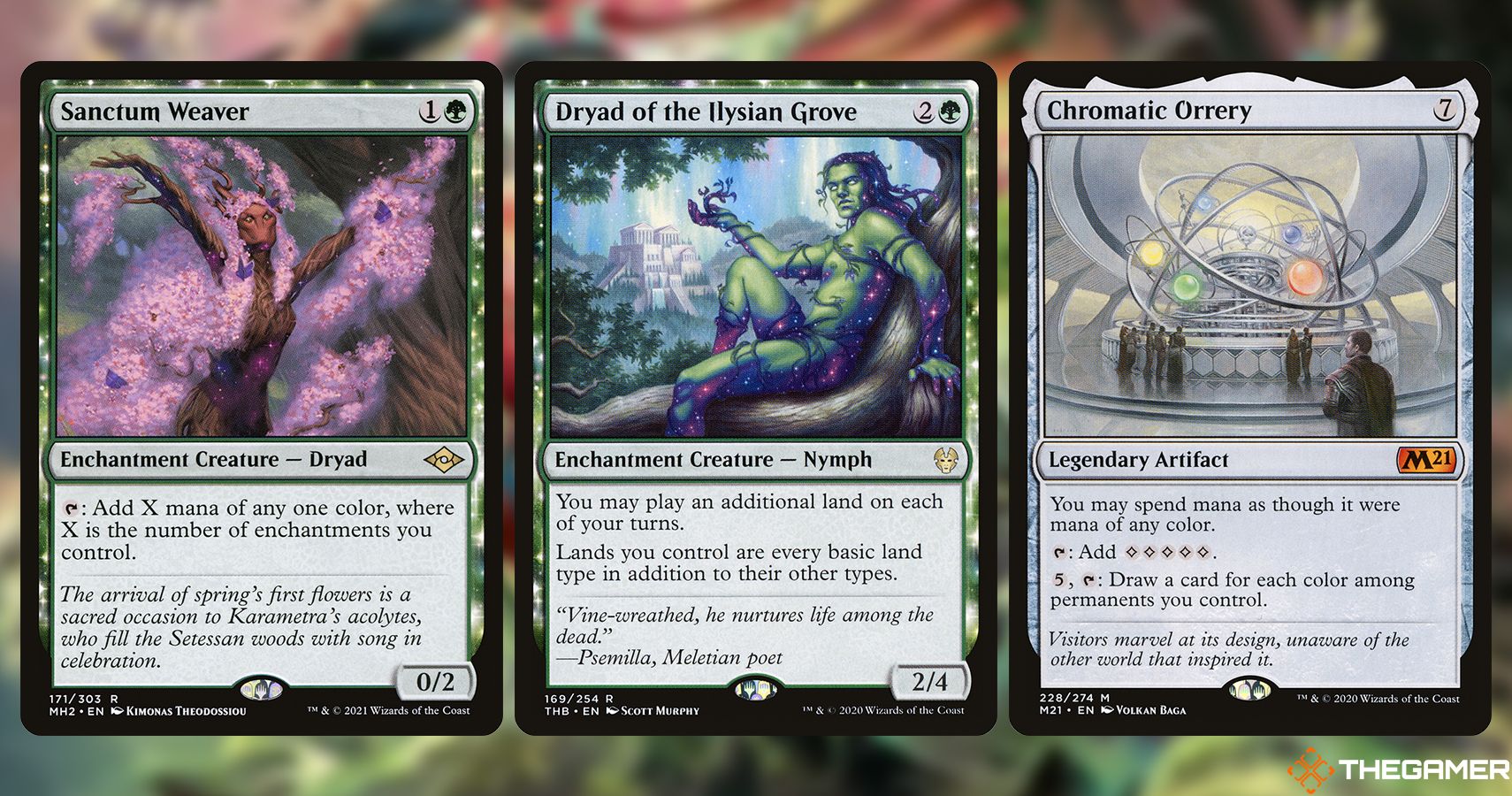 One of the hardest things about playing a WUBRG deck is having the right mana out to cast the spells you need. We need to have our ramp on-point, so we're breaking our rule of not including Sol Ring and Arcane Signet. They're just too good to ignore for this deck.

After that, we absolutely want mana smoothing cards. Smoothing is less about playing extra mana and more about fixing your mana pool to produce the right colours, which can be done with Dryad of the Ilysian Grove (which also ramps as a bonus), Chromatic Orrery, and Chromatic Lantern. Chromatic Orrery is fantastic in this deck, as you can just tap it to produce five colourless that can then be used to activate Life's Origin's ability.

We've got the usual greats for the actual ramp: Kodama's Reach and Cultivate. This deck doesn't use that many basic lands so we don't need to go overboard; it only needs to be a few cards to pull out the actual colour we need in a pinch, rather than serving as the backbone of our ramp package.

One vital card is Sanctum Weaver, an enchantment creature that can tap to make mana of any one colour equal to the number of enchantments you control. One colour only may sound like a limitation, but it isn't a problem you have to worry about thanks to Chromatic Orrery. 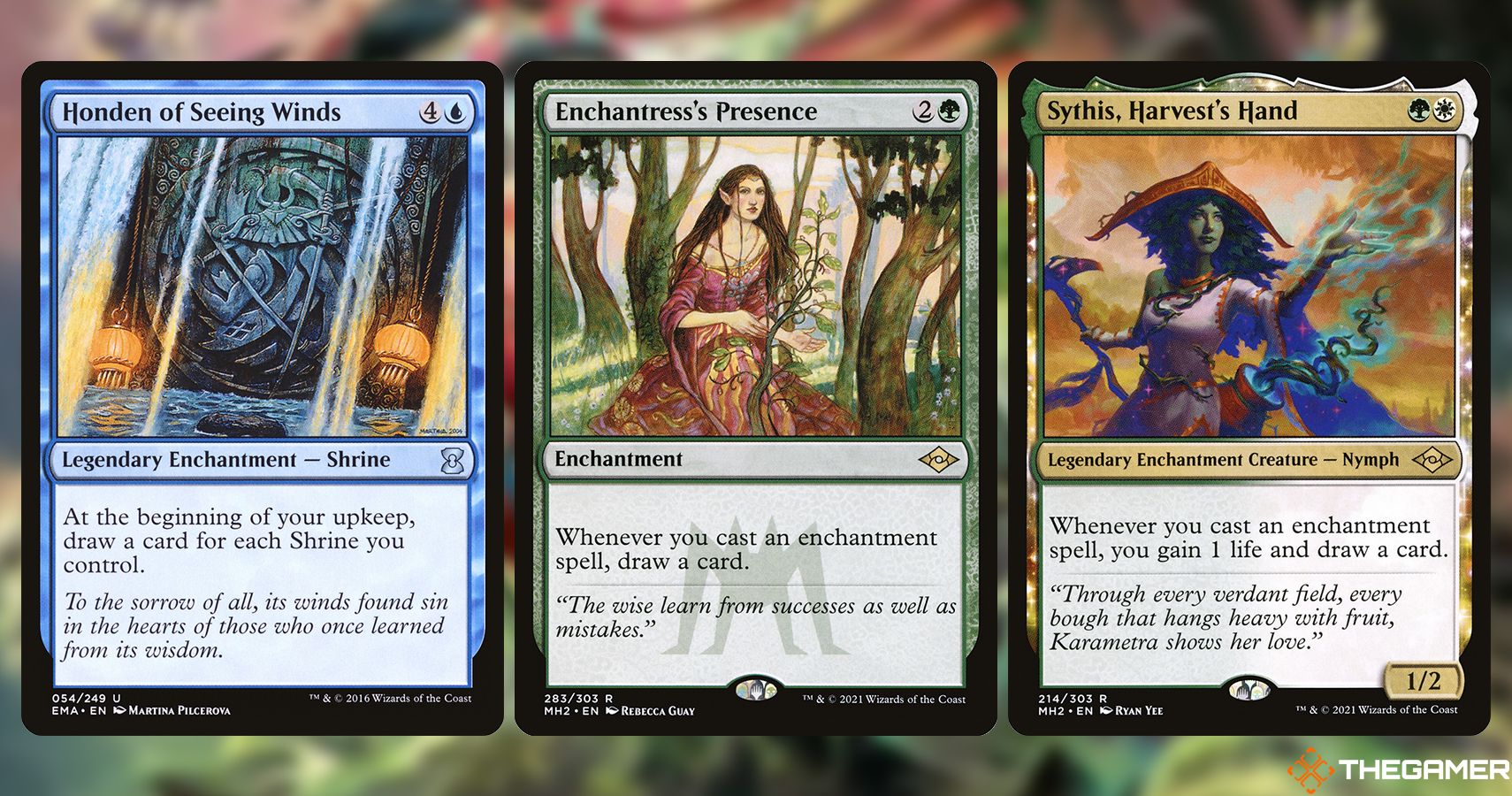 This deck lives and dies based on how many of the Shrines you can find and play, so anything we can do to get more cards is worth it.

Our Shrines help here. Sanctum of Calm Waters and Honden of Seeing Winds draw cards equal to the number of Shrines you control. At the very least, that'd be one card a turn, but in a perfect game, it could be well over 17. Best throw in a Reliquary Tower just in case our hand gets too big.

Sythis, Harvest's Hand is one of the go-to Enchantress Commanders thanks to her card draw capabilities, so putting her as one of the 99 in Go-Shintai is a great idea. Enchantress's Presence also draws a card whenever you cast an enchantment spell, doing effectively the same thing as Sythis. 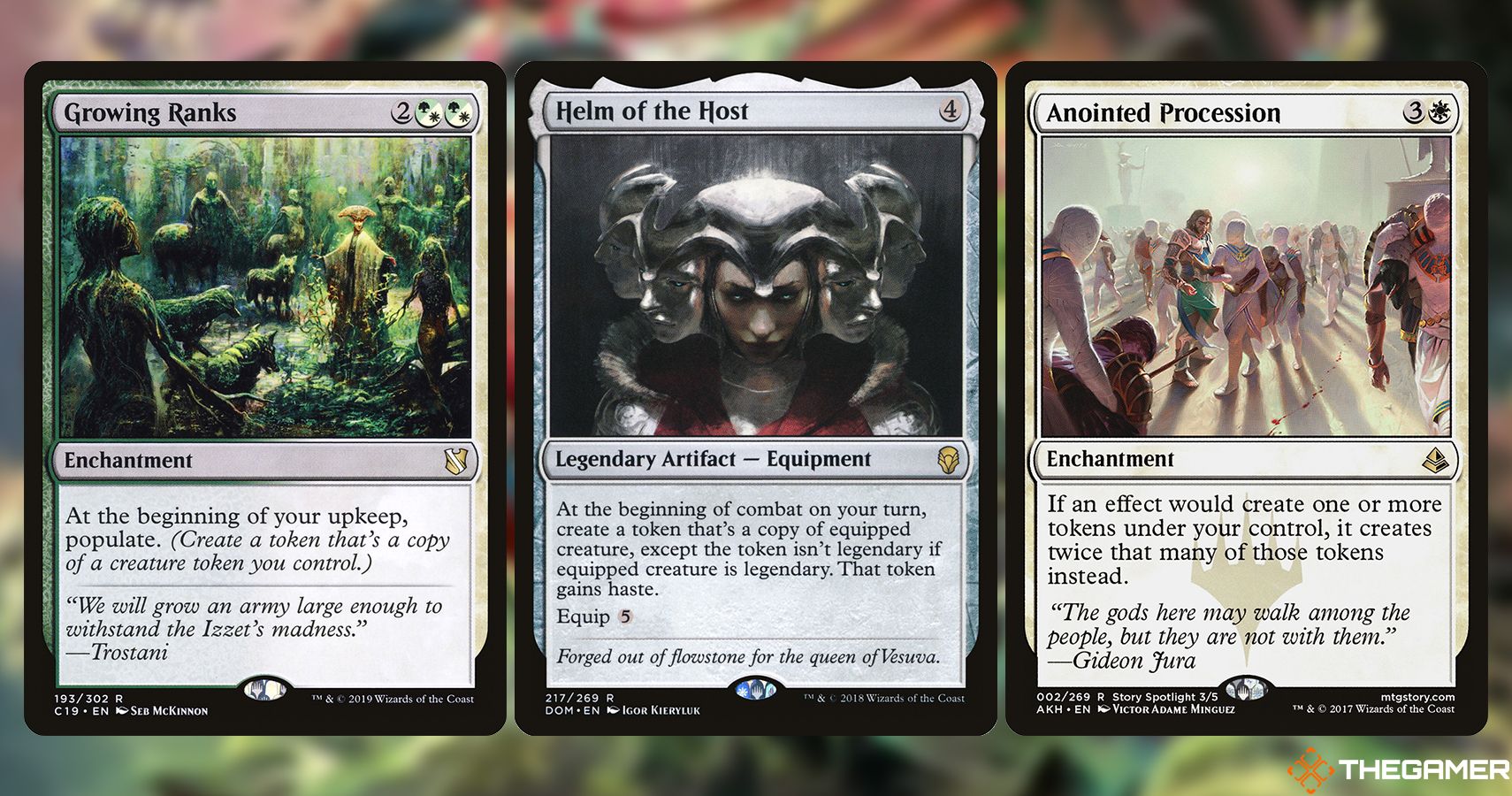 While we are playing every single Shrine enchantment ever released for the game, we can take it so much further with Life's Origin's ability to make a 1/1 Shrine enchantment creature token whenever it or another Shrine enters the battlefield. If we can find ways to copy those tokens, we could still get a lot of value out of just one or two Shrines, instead of relying on finding all of them.

First, Anointed Procession is an absolute must. It replaces the tokens you make with two of them instead, doubling the efficiency of Life's Origin.

Populate is an incredibly underused mechanic that makes a copy of a token you control. It's primarily found in white and green, which, along with the Enchantress staples like Sythis and Enchantress's Presence, is why this deck is ever so slightly skewed towards those colours.

After that, we're relying on the Populate mechanic to make more Shrine tokens without actually playing any extra Shrines. With cards like Growing Ranks, Song of the Worldsoul, and Full Flowering, those Shrine tokens will be adding up incredibly quickly. Again, make sure you have Anointed Procession out to double how many you make.

Helm of the Host is also really good in this deck, as it makes non-legandy copies of creatures you control. Whether it's Life's Origin or one of your other Go-Shintai, it can be a good way to fill up on the good kind of shrine over the measly, ability-less token versions. 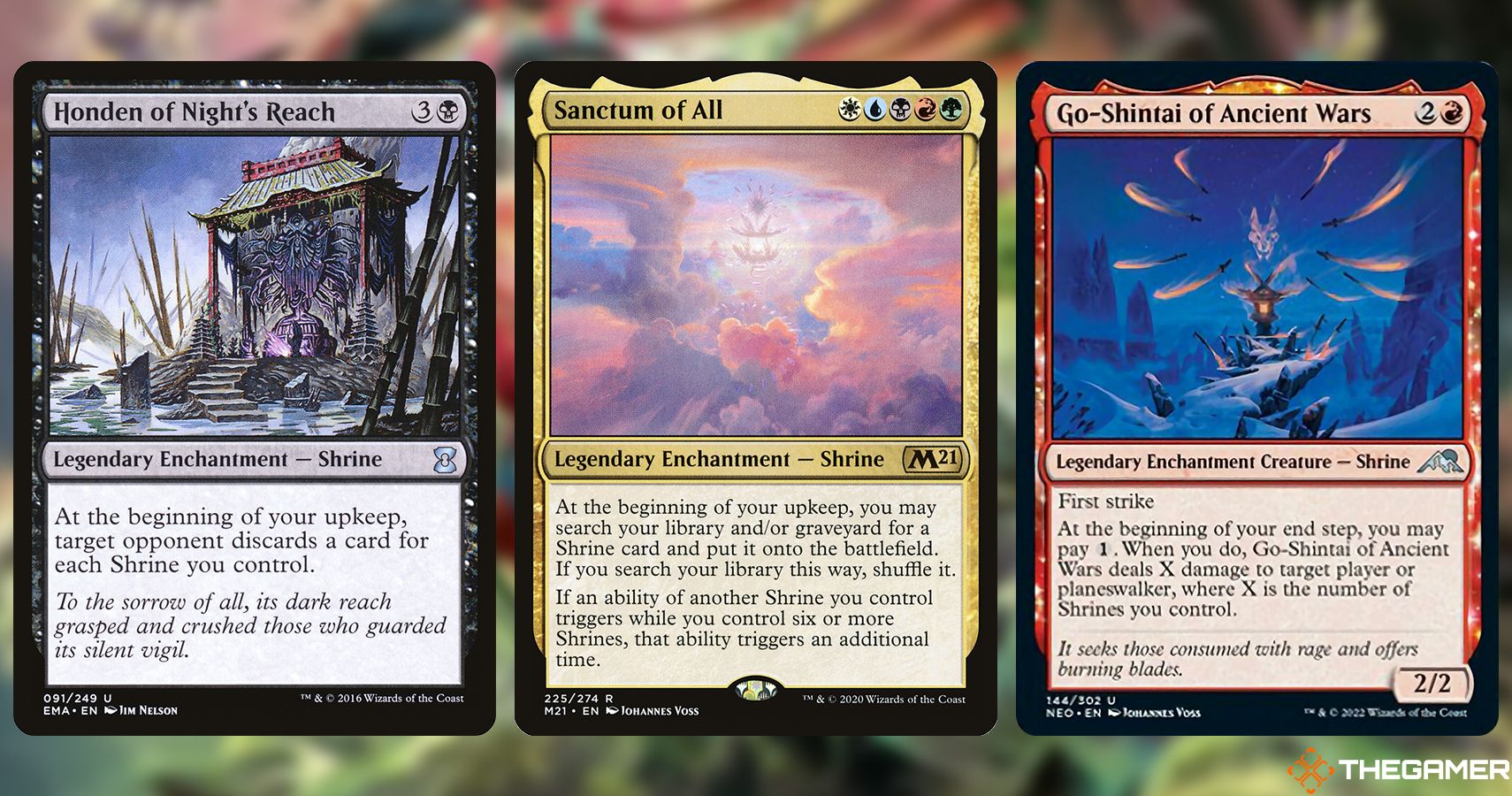 It almost feels a bit redundant even going over the actual Shrines in the deck, because the deckbuilding strategy was "is it a Shrine? Yes? Bang it in, then!". We're using every Shrine currently in the game, with 17 total. That being said, a few Shrines are specifically critical to our deck working, so it's worth pointing them out.

The Shrines are split into three cycles:

One more important Shrine not mentioned so far: Sanctum of All. Sanctum of All costs one of each colour, but it not only lets you search your library for a Shrine and put it onto the battlefield at the start of your upkeep, it also doubles the triggers of every other Shrine you control. Life's Origin can pull two Shrines out of your graveyard, Infinite Rage will deal double the damage, Fruitful Harvest will produce double the mana, and so on.

In many ways, Sanctum of All is the real Commander of this deck and needs to be protected at all costs. Make heavy use of protective cards like Avacyn's Memorial and Greater Auramancy and counterspells like Dovin's Veto or Counterspell to keep Sanctum of All out for as long as you can.

Keep in mind that Sanctum of All doubles all triggers, which means for the Go-Shintais you'll have to pay one mana per trigger. Having a card like Sphinx of the Second Sun to untap all your permanents to pay for those triggers.

One of the drawbacks of this deck is that enchantments can sometimes be simple for your opponents to remove, so we want a way to get everything back in the event of a boardwipe. Life's Origin can do it piece-by-piece, sure, but Brilliant Restoration, Dance of the Manse, Resurgent Belief, and, to a lesser extent, Creeping Renaissance and Crystal Chimes all do it so much better. 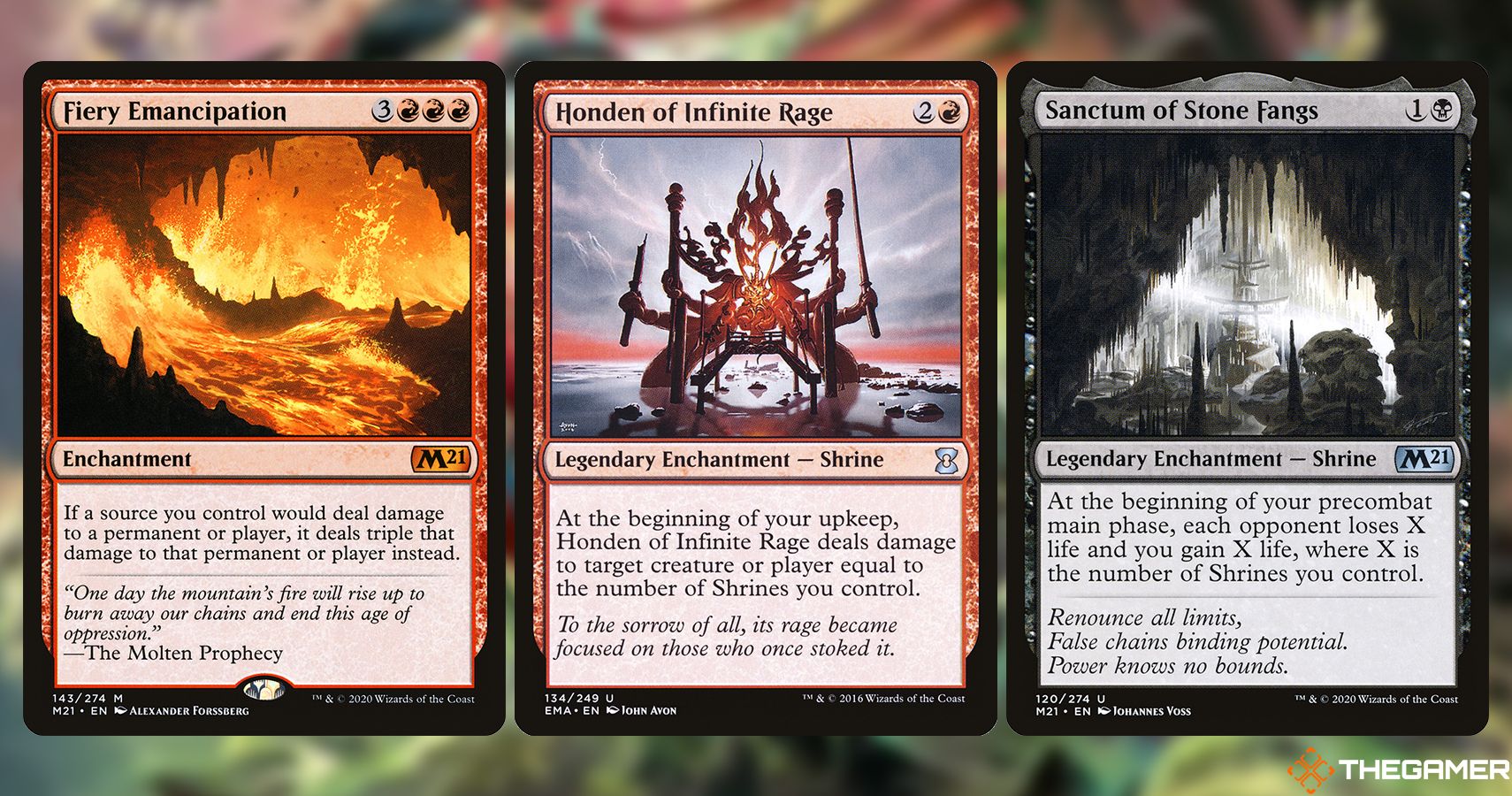 Life's Origin is the definition of a one-track-mind Commander: your only goal is to assemble as many Shrines as you can and win with the vast amount of triggers they all set off each turn.

To help finish your opponents off even quicker, Fiery Emancipation is one of the funniest red enchantments ever. It triples the amount of damage sources you control deal – if you control ten Shrines, including a Sanctum of All and a Honden of Infinite Rage, you'll be dealing a total of sixty damage to each opponent each turn. If that somehow isn't a win, then, frankly, you've got to respect your opponent's life-gaining hustle.

For even bigger damage against a single opponent, you could consider throwing in a Brash Taunter, which deals damage to an opponent equal to the amount of damage dealt to it. In the ten Shrines example, you could target Brash Taunter with a Go-Shintai of Ancient Wars to deal sixty damage to it. Then, the Taunter goes to deal that sixty to an opponent, which is tripled again by the Fiery Emancipation for an eye-watering 180 damage. It's slow and clunky, but it's absolutely hilarious.

Of course, that isn't the only way this deck can win. You could rely on the token producers like Life's Origin, Go-Shintai of Shared Purpose, Anointed Procession and Song of the Worldsoul to flood your opponents under a sea of creature tokens. Or you could even mill them out with Go-Shintai of Lost Wisdom.

Power The Deck Down 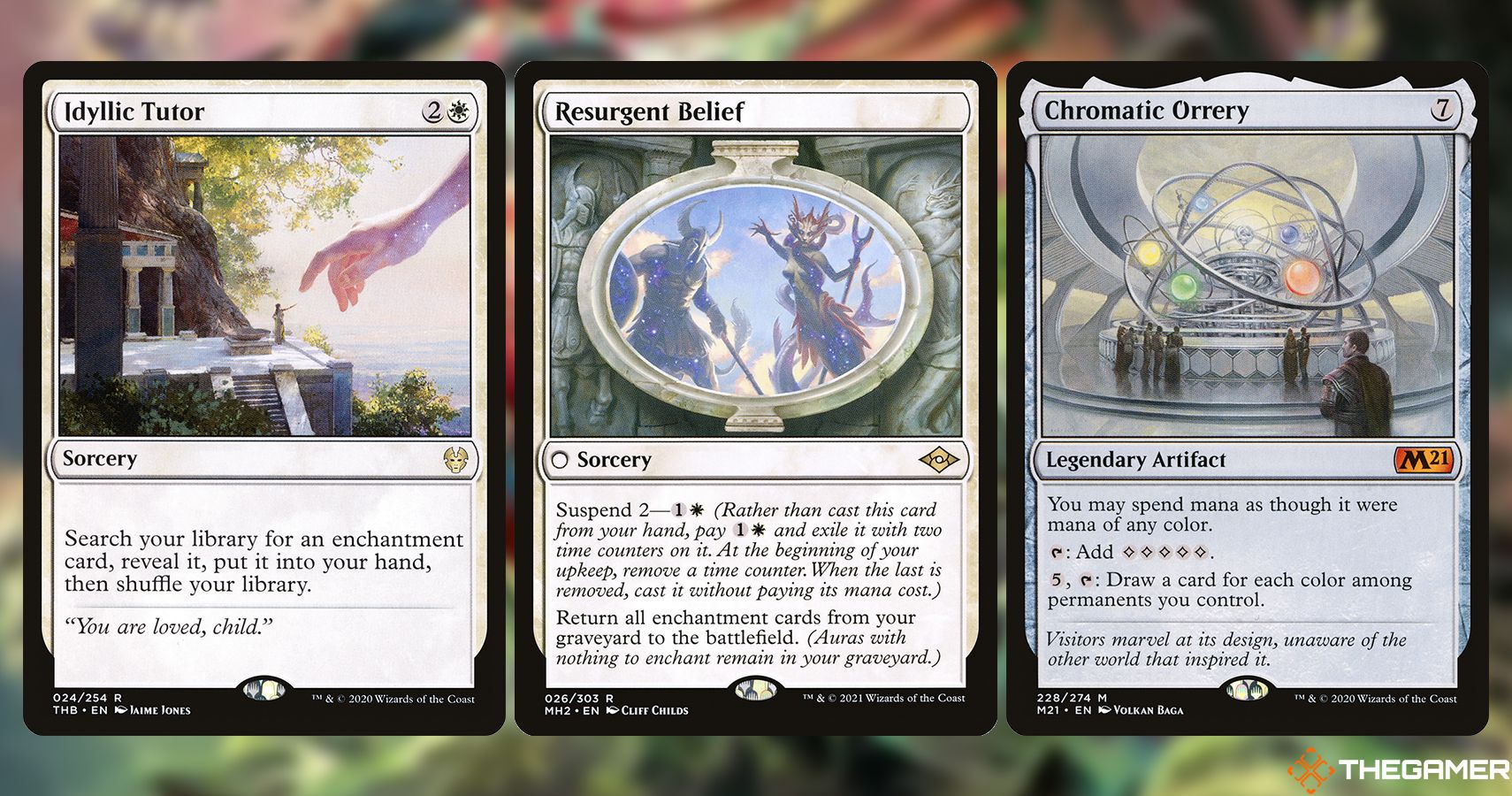 First, as usual, take out the tutors. Enlightened Tutor and Idyllic Tutor are here primarily to find Sanctum of All as soon as possible, so without them, we'll have to rely on drawing through the deck instead.

There are three key problems with this deck:

Therefore, an excellent way to tone down the deck for slower playgroups is to either play up these weaknesses by swapping in less-optimal cards, or reducing your redundancy against them with fewer protective spells.

Next, take out some of the mana smoothing to force yourself to rely on the lands. Chromatic Orrery is the big one here, but also Dryad of the Ilysian Grove and Chromatic Lantern would be reasonable next steps. If you wanted to take it to the extreme, you could even swap out some of those shocklands and fetch lands with slower duals like the Kaldheim snow lands or generic tap lands. You still need access to all five colours, but we did admittedly go ham on some of the most efficient lands in the game for this.

Finally, take out some of the mass-graveyard-recursion tools to increase the likelihood of a board wipe sticking. Resplendent Belief is probably the big one to take out because it's so cheap, even if it takes two turns to use. Teferi's Protection and Heroic Intervention are also good choices to make your pieces a bit more vulnerable.

To see the full decklist, either check out of the Moxfield page or expand the box below.

Dance of the Manse

Dryad of the Ilysian Grove

Esika, God of the Tree / The Prismatic Bridge

Helm of the Host

Herald of the Pantheon

Sigil of the Empty Throne

Sphinx of the Second Sun

Temple of the False God