When game night arrives and the time of battle approaches, are you willing to do anything it takes to win? Okay, maybe not anything. But would you do a lot? Specifically, would you risk losing if it meant you could defeat your opponents? If so, a Demon tribal deck may be just the thing you're looking for.

There are so many iconic Demons in Magic: The Gathering lore. From Griselbrand to Ob Nixilis, powerful Demons have wreaked havoc across the various planes for years. Of course, they come with their downsides, like forcing you to sacrifice creatures or losing life. But that's a necessary price to pay if you want to overwhelm your opponents with some of the biggest, baddest creatures in Magic: The Gathering. 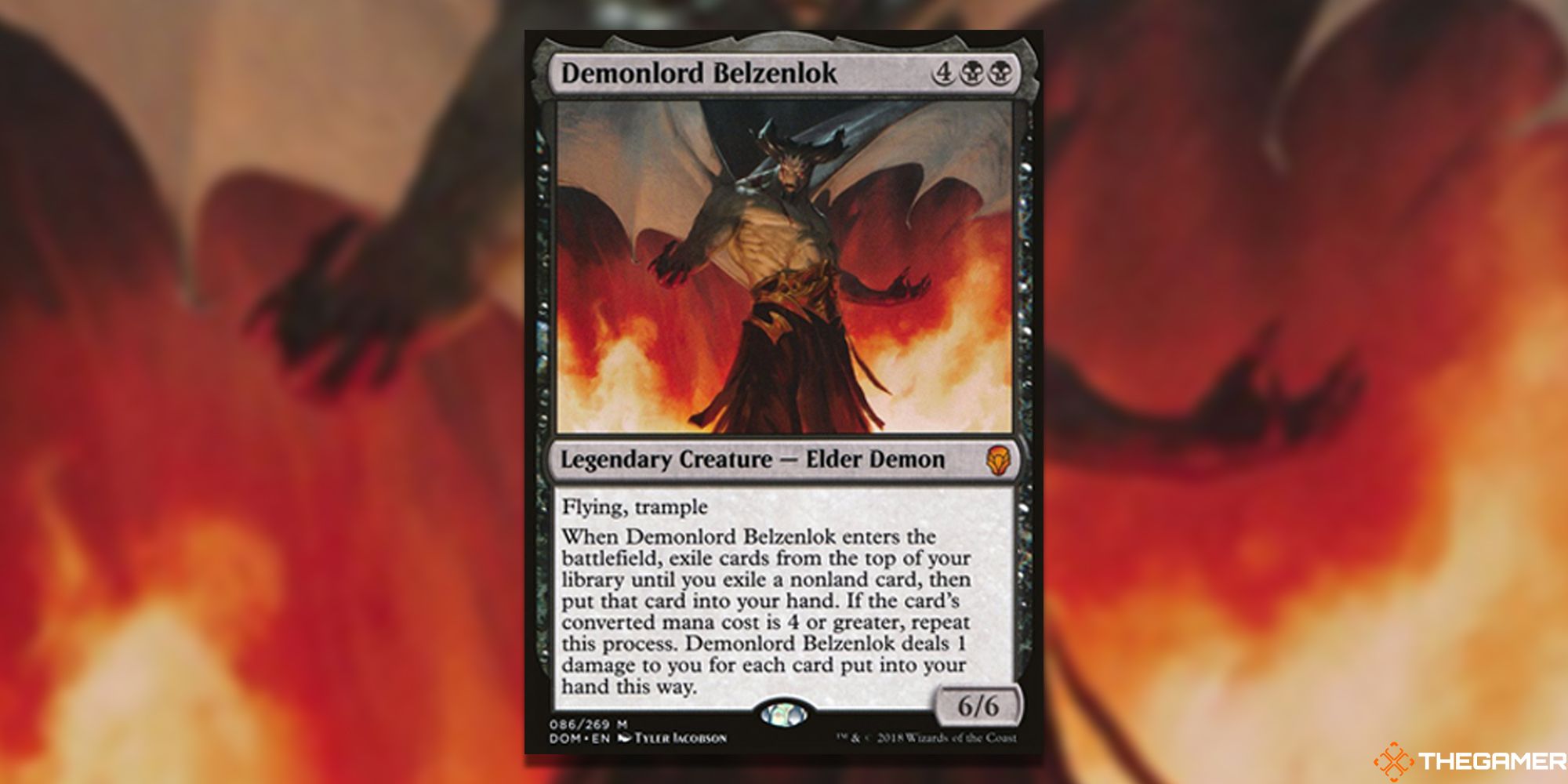 Demonlord Belzenlok has game-changing potential when used at the right time. His ability synergizes perfectly with the high mana value of most of the Demons you'll run in this deck, allowing you to fill your hand when you cast him. Cards like Insidious Dreams will allow you to put the exact cards you want on top of your deck, so when Belzenlok is cast, you can get them all into your hand.

Belzenlok is not one of those commanders whose necessary for the deck to work, but when used at the right time can really accelerate your board. Keep some lifegain in your deck to offset the cost of this commander's ability. 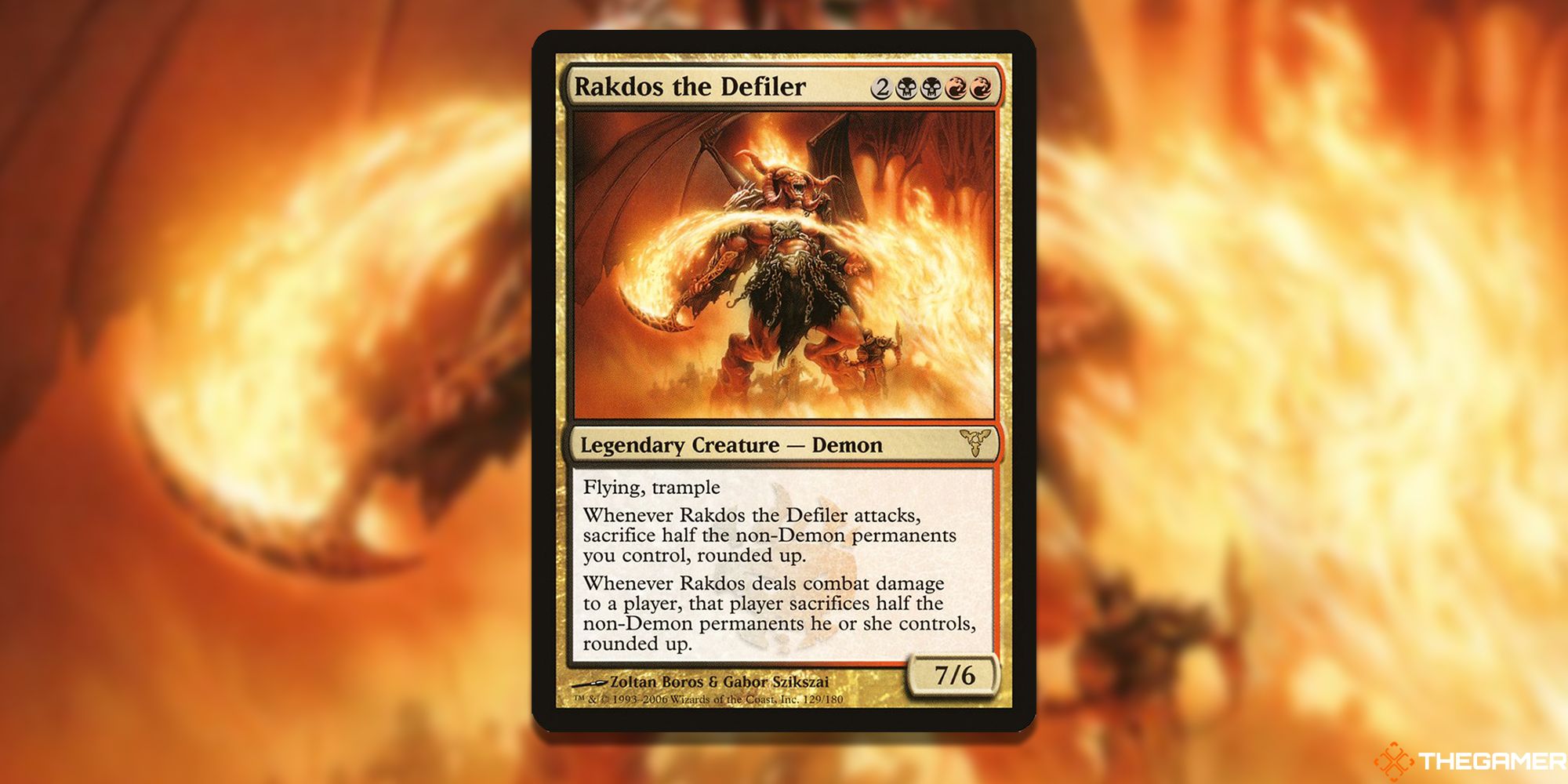 Rakdos the Defiler is an extremely volatile commander that requires a steep sacrifice in exchange for its power. Fortunately, it requires an even steeper sacrifice from your opponents. When you opt to have Rakdos the Defiler attack, the cost is sacrificing half of the non-Demon permanents you control. The kicker is that when Rakdos deals combat damage to a player, they have to do the same thing.

Have an army of Demons ready before attacking, so you can start taking big chunks out of your opponents' life as they are forced to sacrifice half of their permanents. While losing your own permanents is a big hit, you at least get to keep your Demons. Your opponents, unless also playing Demon tribal, stand to lose everything. 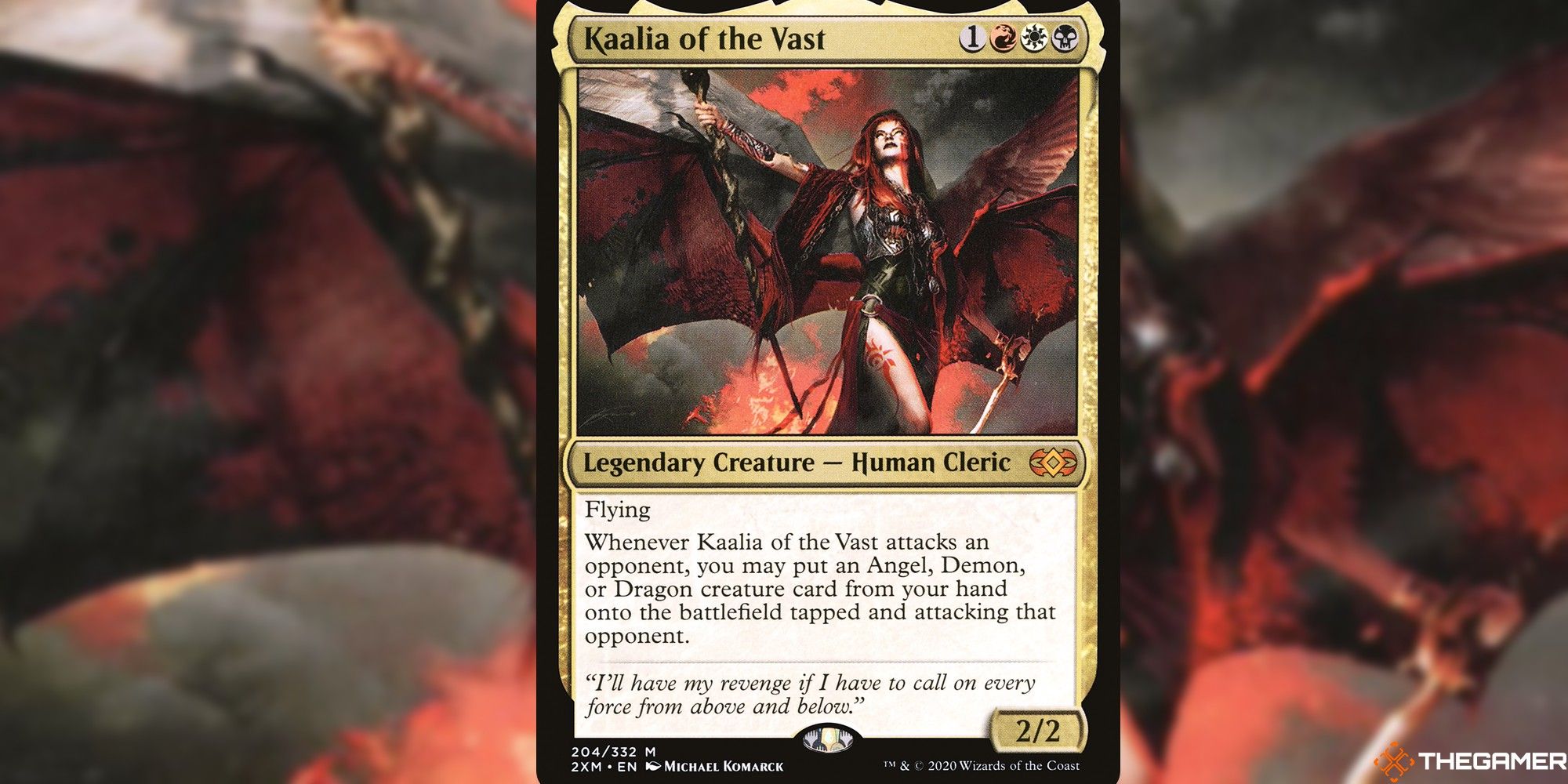 Kaalia isn't normally used as a Demon tribal commander, but with an ability that allows you to cheat out massive creatures, she shouldn't be overlooked. Utilizing black, red, and white means Kaalia has access to almost every Demon card. By turn five, you can expect to be cheating out huge mana-value creatures, like Demon of Death's Gate or Pestilence Demon.

Of course, Kaalia herself is fragile, so you'll want to run some removal to deal with any blockers that might destroy her. Luckily, having access to white greatly increases your removal arsenal, with low mana removal staples like Swords to Plowshares and Path to Exile. Your strategy should be to keep the board as clear as possible, giving your Demons open shots at your opponents' life total. 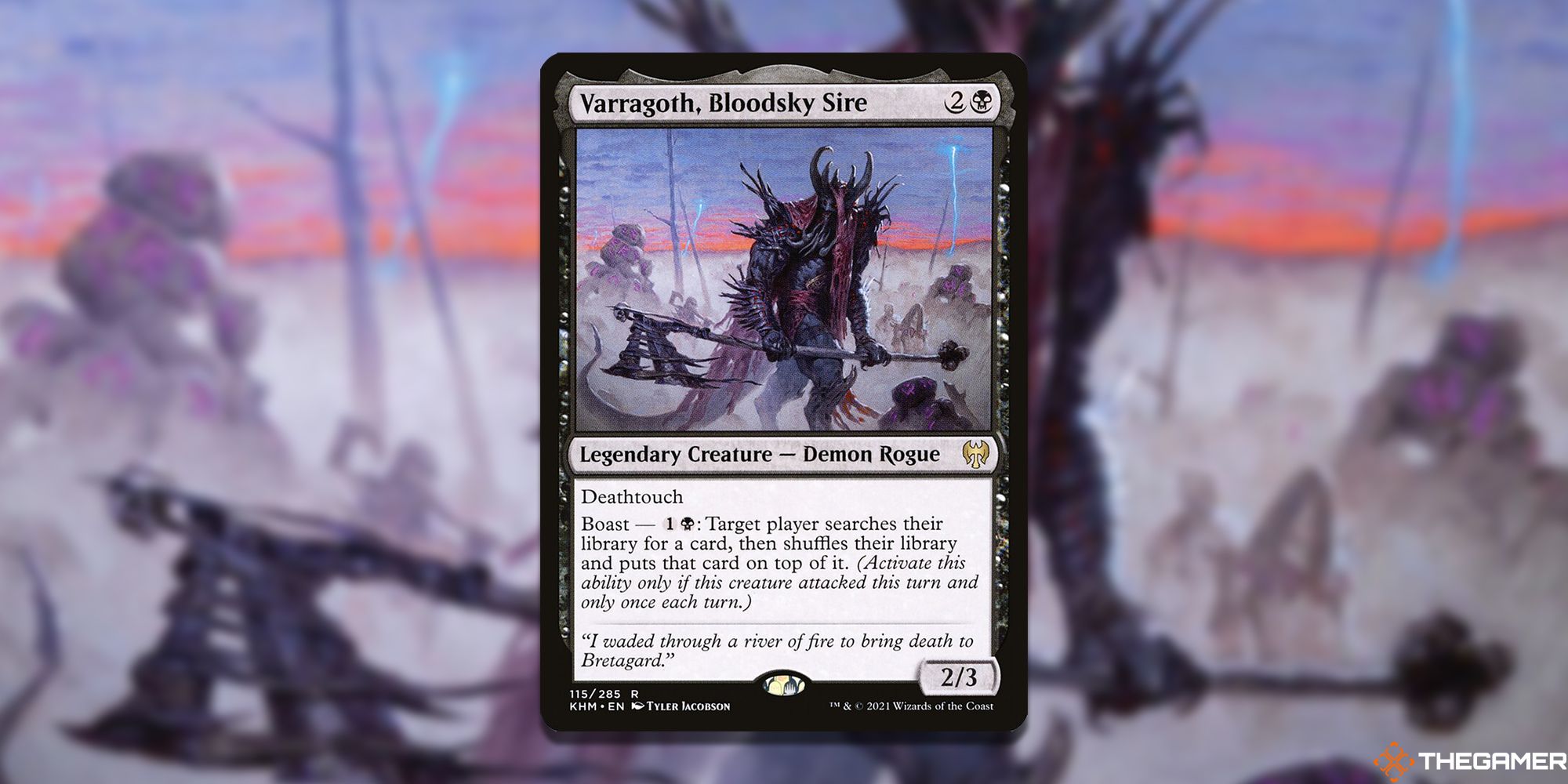 Since Varragoth only costs three mana to cast, you can start tutoring early for ramp cards like Culling of the Weak, to help you cast your high mana value demons. Since he's only a 2/3, you'll want to make sure you have some cards like Whispersilk Cloak or Demonic Embrace to make sure Varragoth can attack each turn, getting the most value you can from his ability. 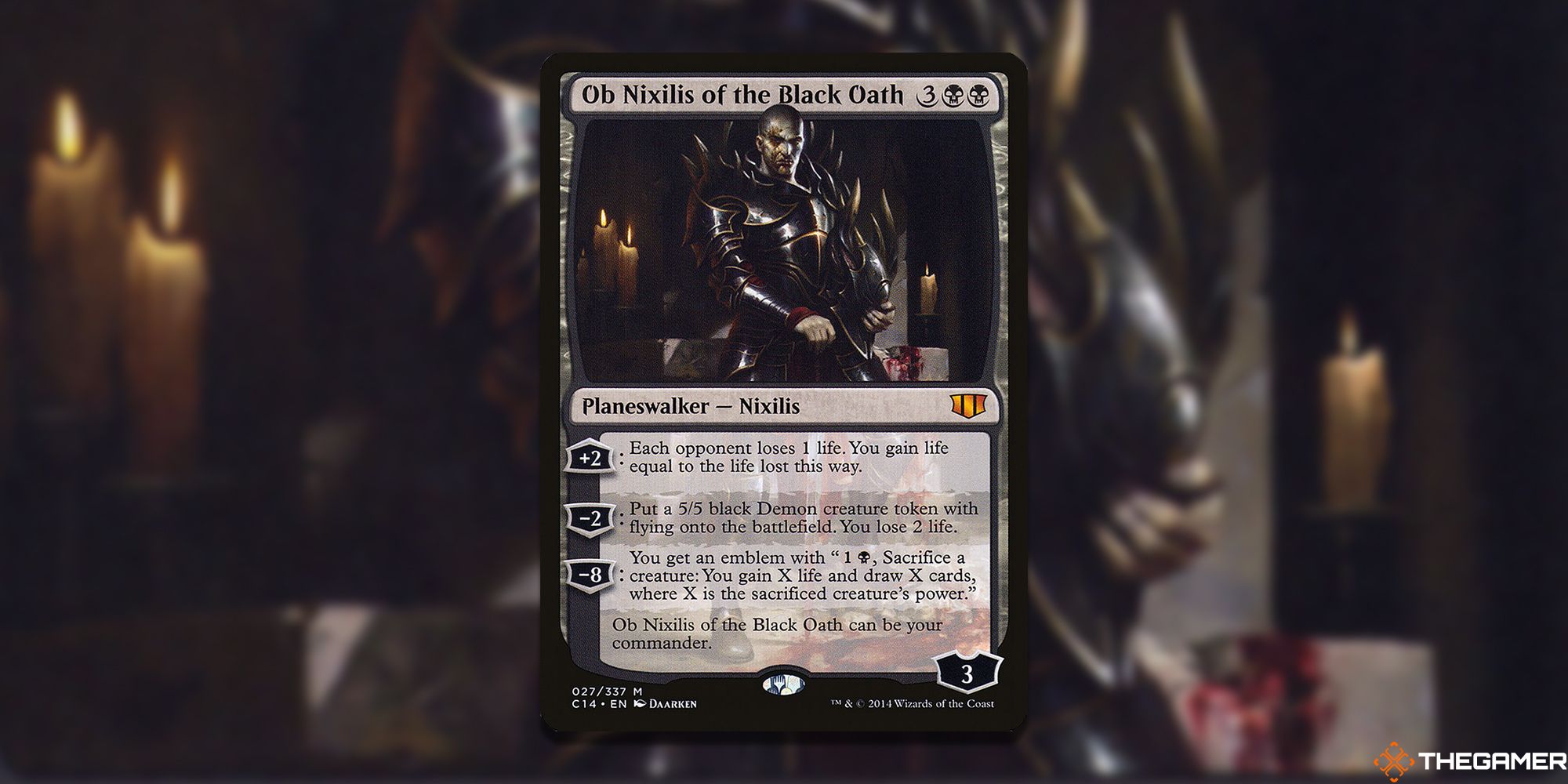 Before he was cursed and turned into a Demon, Ob Nixilis was a strapping, bald planeswalker and a great option for a Demon tribal commander. Like most planeswalkers, your goal should be to activate his ultimate ability, which gives you an emblem that can generate a ridiculous card advantage and life gain given the power of most Demon cards.

Failing that, his second loyalty ability still generates 5/5 Demon creature tokens. Add in enchantment cards like Exquisite Blood and Sanguine Blood to increase the potency of his first ability. Then swap between activating his first two abilities, keeping his loyalty consistent. A swarm of demons is a great deterrent for anyone thinking about attacking him. 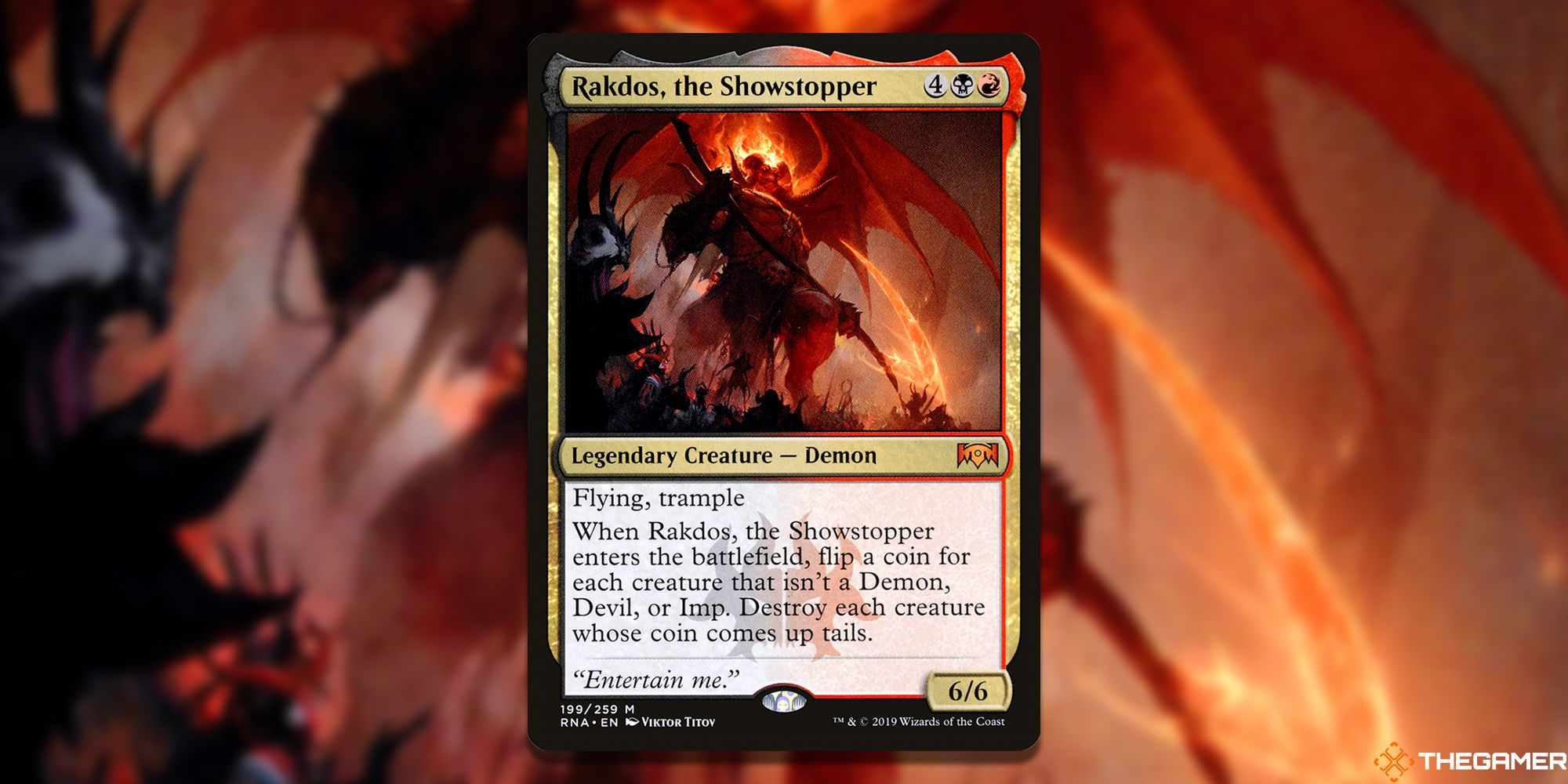 Rakdos is back again, doing what Rakdos does best; destroying anything that's not evil like him. Putting Rakdos, the Showstopper onto the battlefield allows you to flip a coin for each non-Demon, Devil, or Imp creature, with the caveat that you destroy any that come up tails. Of course, there's a chance you flub all the coin tosses, but what's the point of a Demon deck if you're not ready for a little chaos?

Having access to Devils and Imps allows you to cast some low mana blockers to protect you while you ramp up to cast your most dangerous creatures. Use cards like Mahadi, Emporium Master to generate a huge amount of treasure tokens after Rakdos triggers his ability, then use them to cast the rest of your Demons. 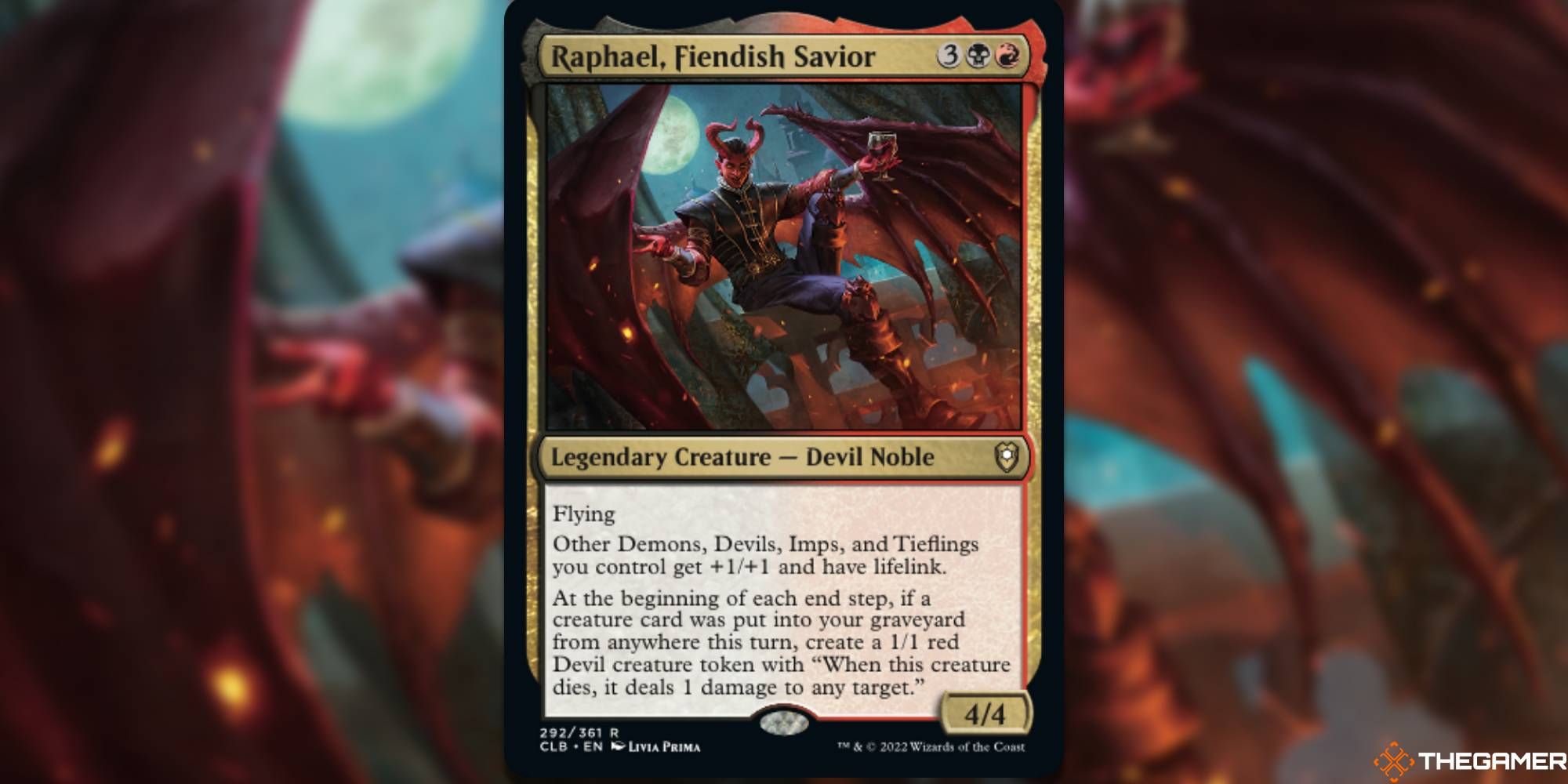 If you're using Demons, chances are you'll have to pay some life to activate their most powerful abilities. Such is the case with cards like Vilis, Broker of Blood. Luckily, Raphael offsets this common downside of Demons by giving them all lifelink, as well as +1/+1. With such high-power attackers, this deck will skyrocket your life total, allowing you to go wild with abilities that cost life.

Demon cards like Kuro, Pitlord, who often struggle to find a place in decks due to their high risk/reward ratio, fit well into Raphael's strategy. Life is a valuable currency in Commander and Raphael ensures you can spend as much as you need to win. 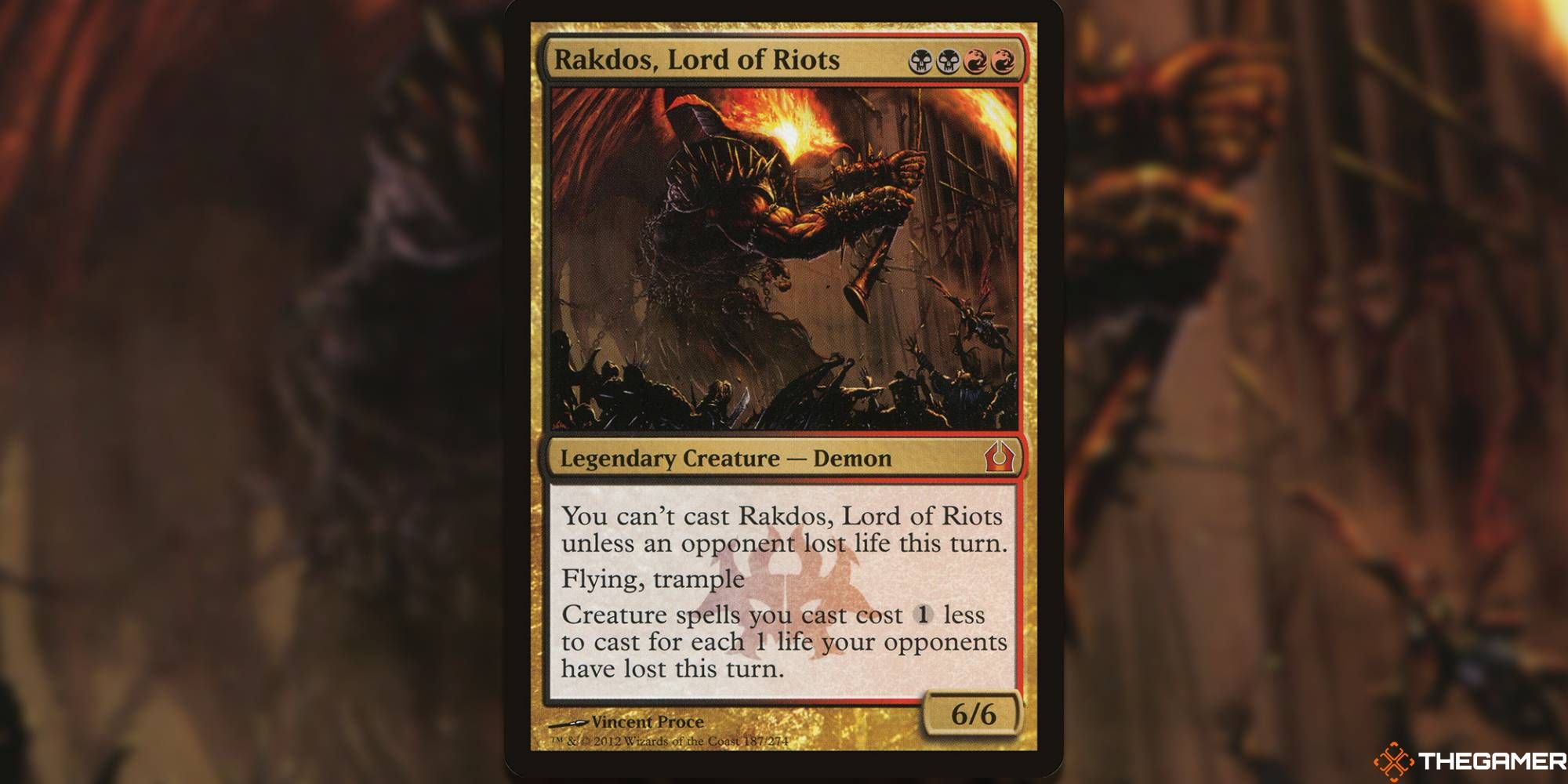 The final iteration of Rakdos on this list is also the most powerful. Rakdos, Lord of Riots makes creatures cost one less to cast for each one life your opponents have lost during the turn. Early game, use red spells like Thermo-Alchemist to deal small amounts of damage, allowing you to cast Rakdos. Then, use a burn strategy with spells like Lightning Bolt, in combination with damage from flying attackers, to rack up the damage on your opponents.

Sure, you'll still have to pay the coloured mana on creatures, but getting a card like Rune-Scarred Demon onto the battlefield for one mana is borderline unfair. 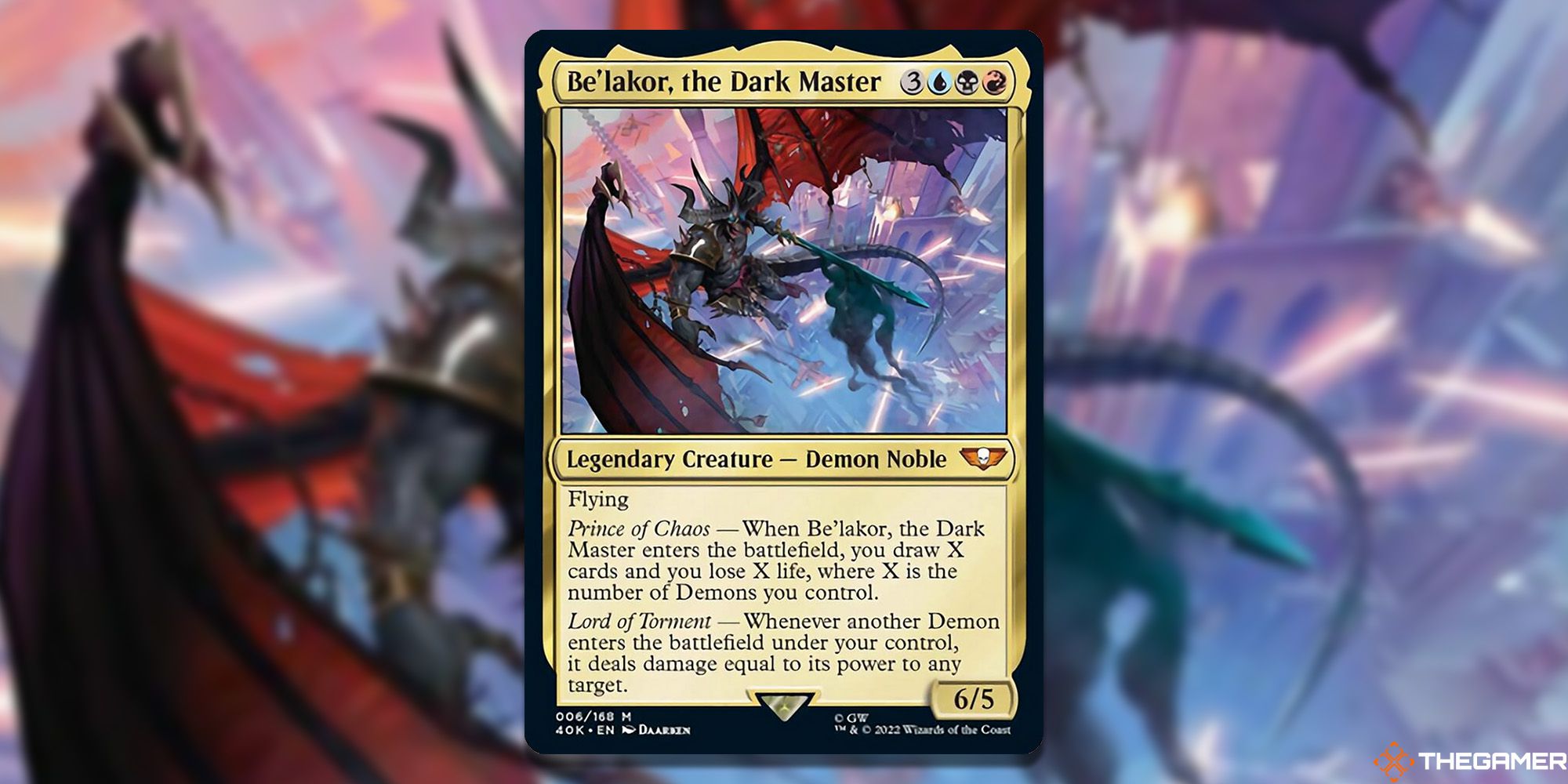 Magic: The Gathering's expansion into the Warhammer universe brought with it a slew of powerful new Demons, and with it, this powerful new commander. Blue is not often seen in Demon decks, but the added element of control is perfect to balance out the chaos of Demon tribal. The goal of this deck is to cast as many Demons as possible, to create a non-stop barrage of damage towards the target of your choice using Be'lakor's Lord of Torment ability.

Cards like Herald of Slaanesh and Herald's Horn will reduce the cost of your Demon creatures, allowing you to cast more each turn. Late game, you don't even need to attack to win. Just cast big Demons like Dread Cacodemon to chip away at whatever life your opponents have left. 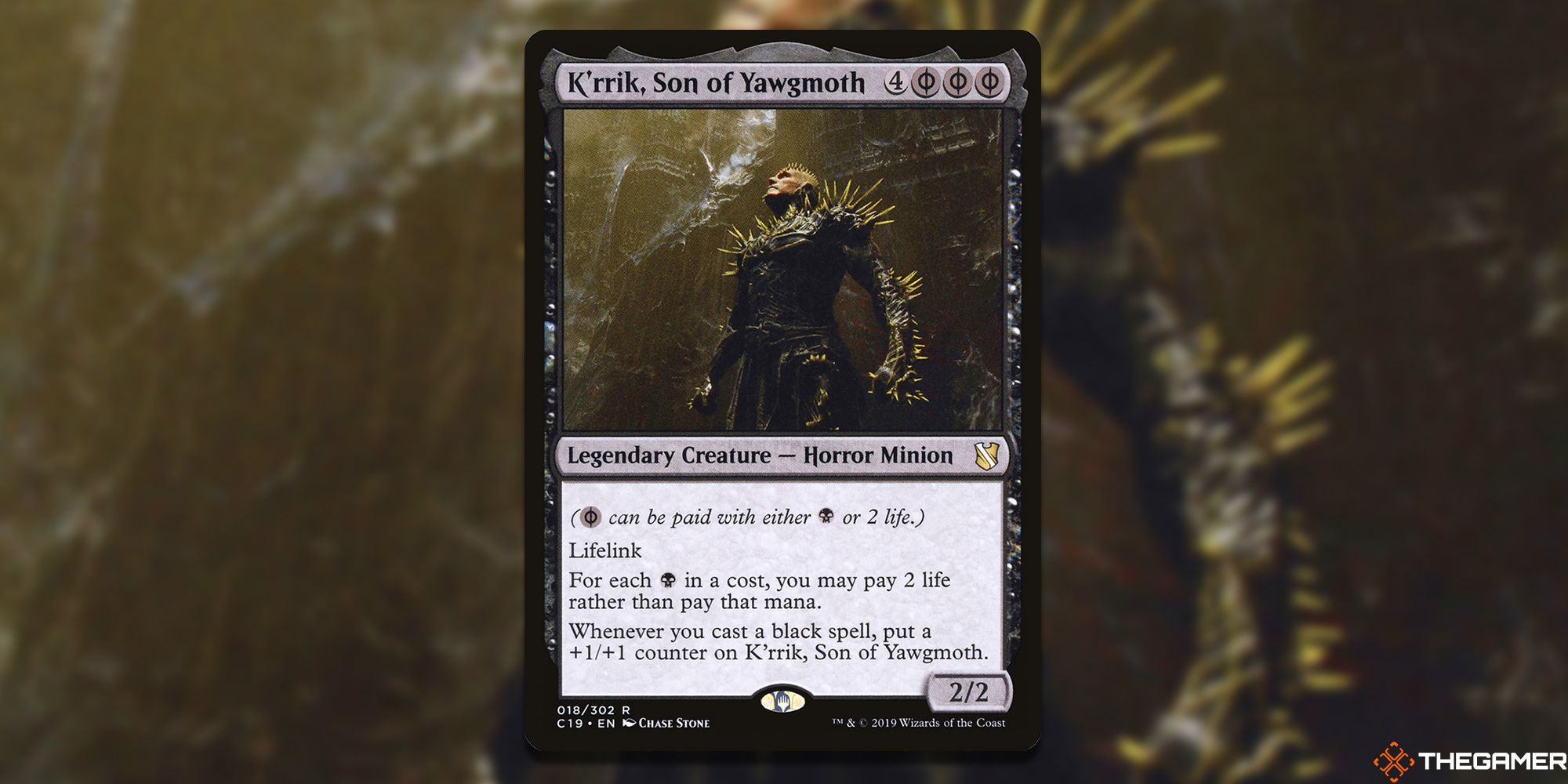 K'rrik is one of those commanders that your opponents don't want to see and for good reason. He turns all black mana into Phyrexian mana, allowing you to cast huge creatures in exchange for life. Circumventing mana costs if one of the most powerful strategies in Magic: The Gathering and K'rriik does it so well.

However, be mindful. It's a powerful ability at a high cost. You can start running out of life really quickly, so include lots of lifegain with cards like Whip of Erebos. K'rrik will also be a target the second he hits the board, so be sure to run protection or reanimation like Beacon of Unrest to keep him on the board.