Unfinity is the latest in the distinguished line of Un-sets in Magic: The Gathering. These are expansions that eschew mainstream format legality in favour of bizarre, game-breaking effects that simply wouldn’t work in normal sets, and wild settings and characters that go beyond the acceptable limits of Magic’s general tone.

Set on the travelling interstellar amusement park known as (deep breath) Myra the Magnificent's Intergalactic Astrotorium of Fun, Unfinity delivers a hearty dose of humour, with in-jokes and references to other Magic settings and characters aplenty. There is also some of the most hilarious, boundary-pushing artwork you’ll find anywhere in the game. Simply put, the set is an embarrassment of artistic riches. Here are ten of our favourite pieces; the ten brightest stars in Unfinity’s sky. 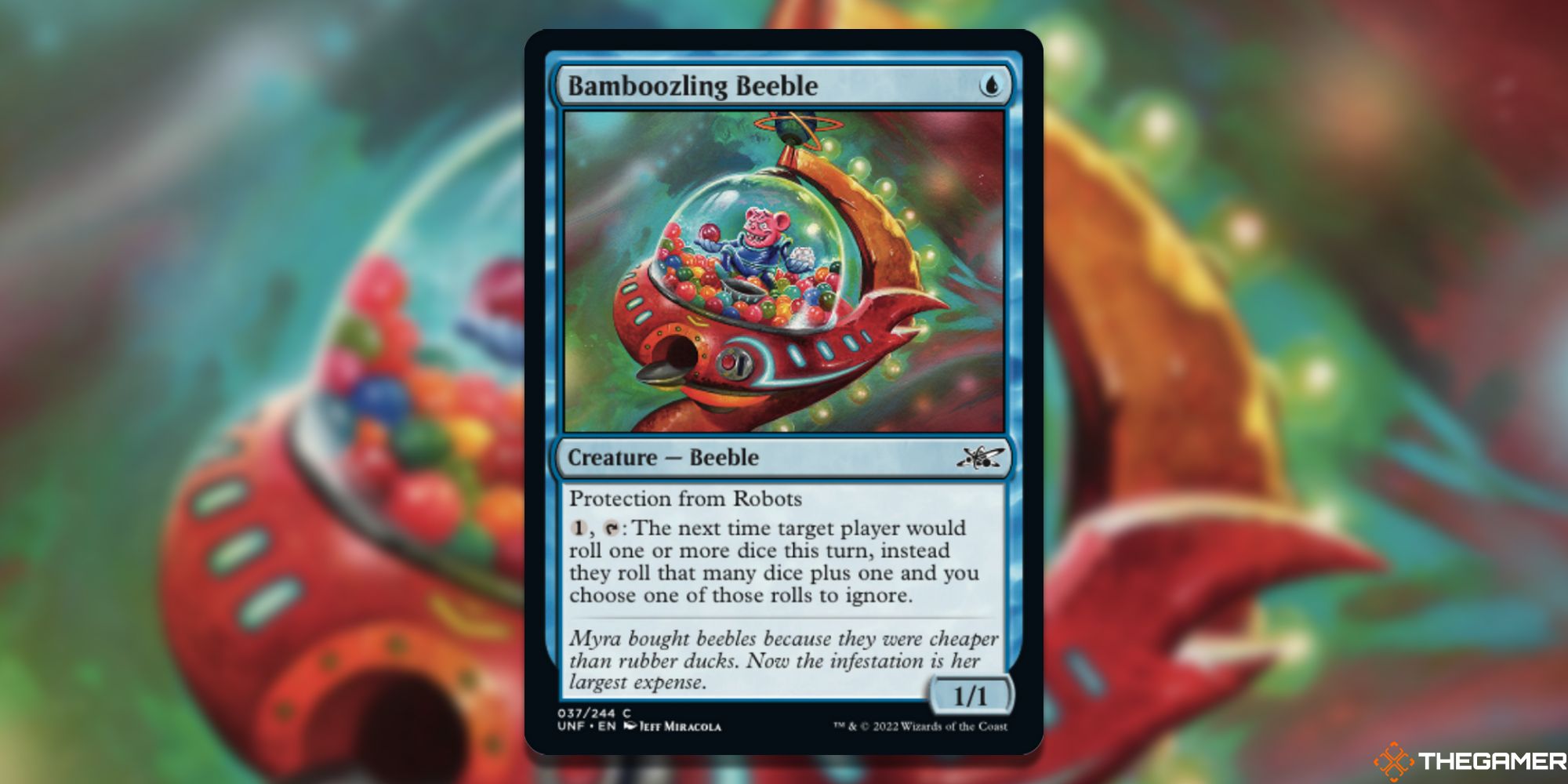 Featuring a devious-looking Beeble piloting a spaceship that doubles as a gumball machine, Bamboozling Beeble perfectly captures Unfinity’s thematic fusion of amusement parks and outer space. This double-usage is not only clever, but also serves to remind us of the tiny size of Beebles as a creature type — something newer players may not be aware of.

Beyond this, it’s also just a technically excellent piece. Miracola makes brilliant use of colour, not only across the rainbow-hued gumballs but also across the fabric of space in the background. It creates a sense of cosmic wonder and joy that pervades the very best Unfinity art.

9/10 Greatest Show In The Multiverse, By Alix Branwyn 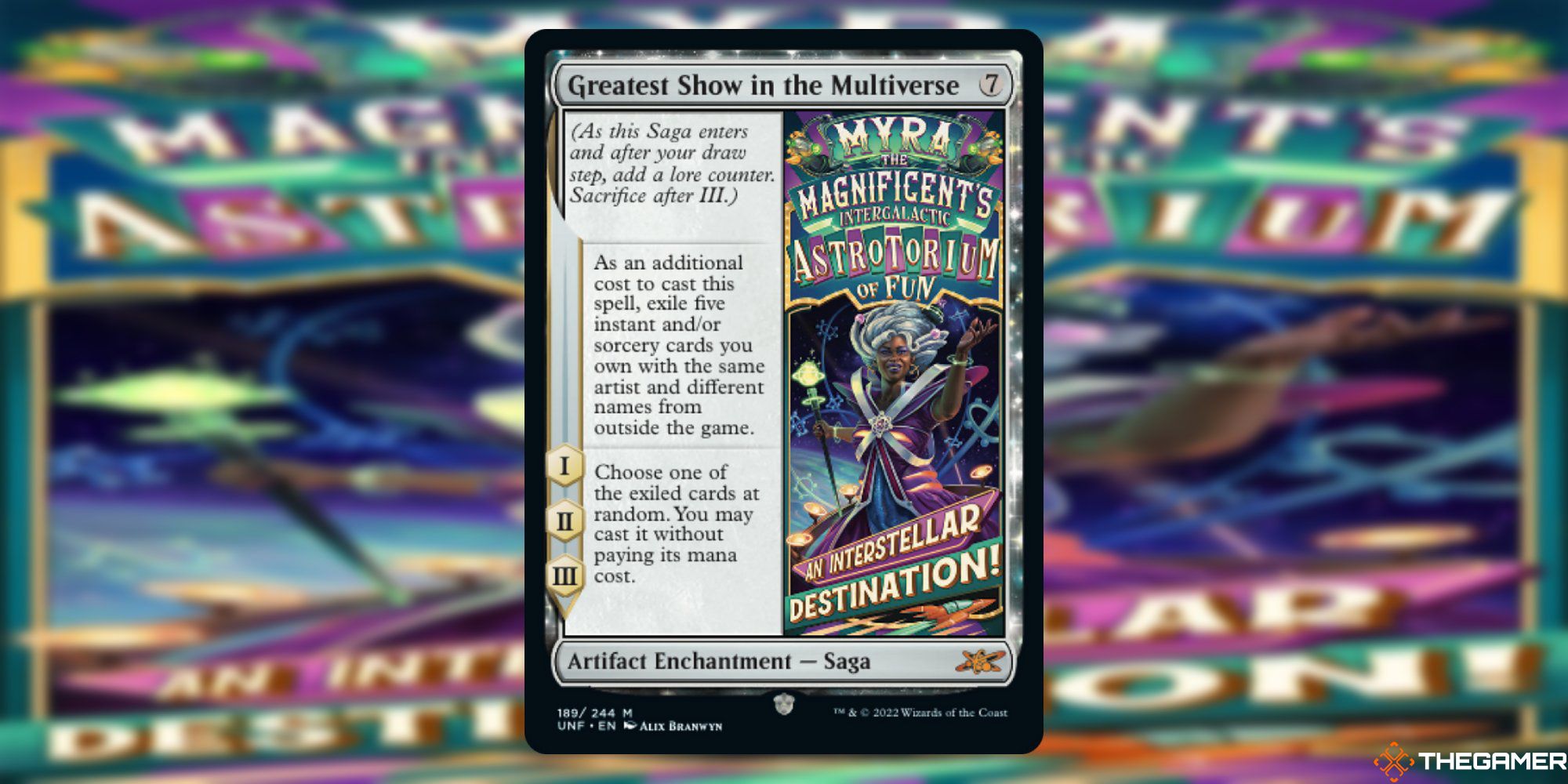 Sagas, even in a normal Magic set, tend to feature more experimental artwork. From mosaics to stone carvings, from maps to stained glass windows, they push the boat out and reflect the culture of the sets they’re from in interesting ways. Greatest Show in the Multiverse, the sole Saga from Unfinity, is no exception.

Taking the form of a poster or flyer for the amusement park itself, this piece gives an insight into how the park is marketed to the rest of the multiverse. The font, a distinct blend of sci-fi and circus stylings, is highly evocative. The piece also features an appearance from Myra the Magnificent herself, the oft-mentioned but rarely-seen mastermind behind the entire park. 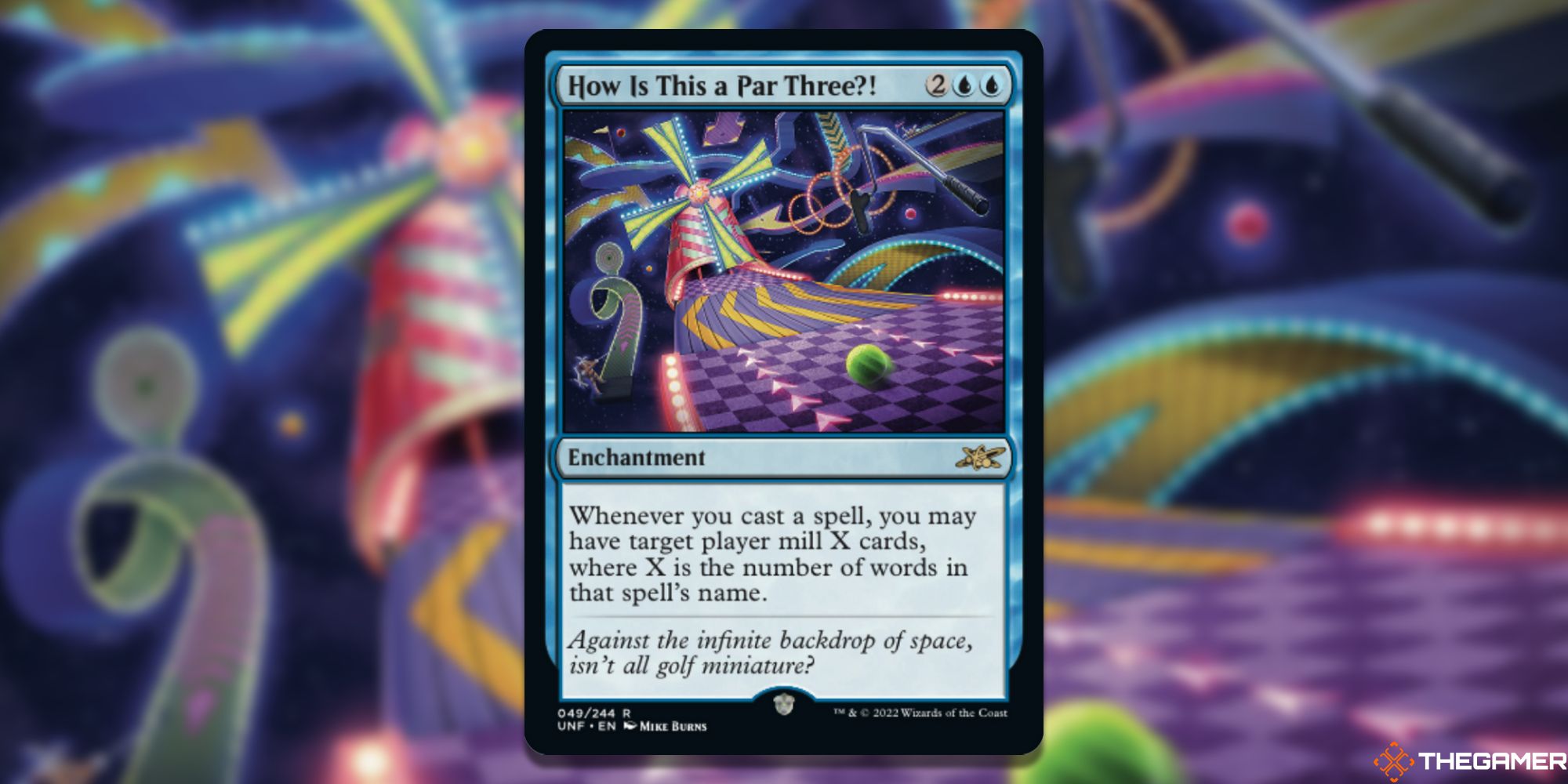 Like much of the artwork in Unfinity, this piece forms a complete joke when paired with its card name. Presenting a cosmic take on a mini golf course, the perspective here is carefully pulled back, giving the viewer a look at the full scale of the challenge before them like a Mario Kart preview video.

Several holes are visible, including a loop-de-loop, an angry-looking windmill, and a sheer drop — the logistics of which boggle the mind once gravity is removed as a factor. The bright colours manage to scream both ‘fun’ and ‘impossible’ at the same time, while the strangely-shaped golf club in the foreground hints at the lateral way you’ll need to approach this course (or the frustrations of those who attempted it previously). 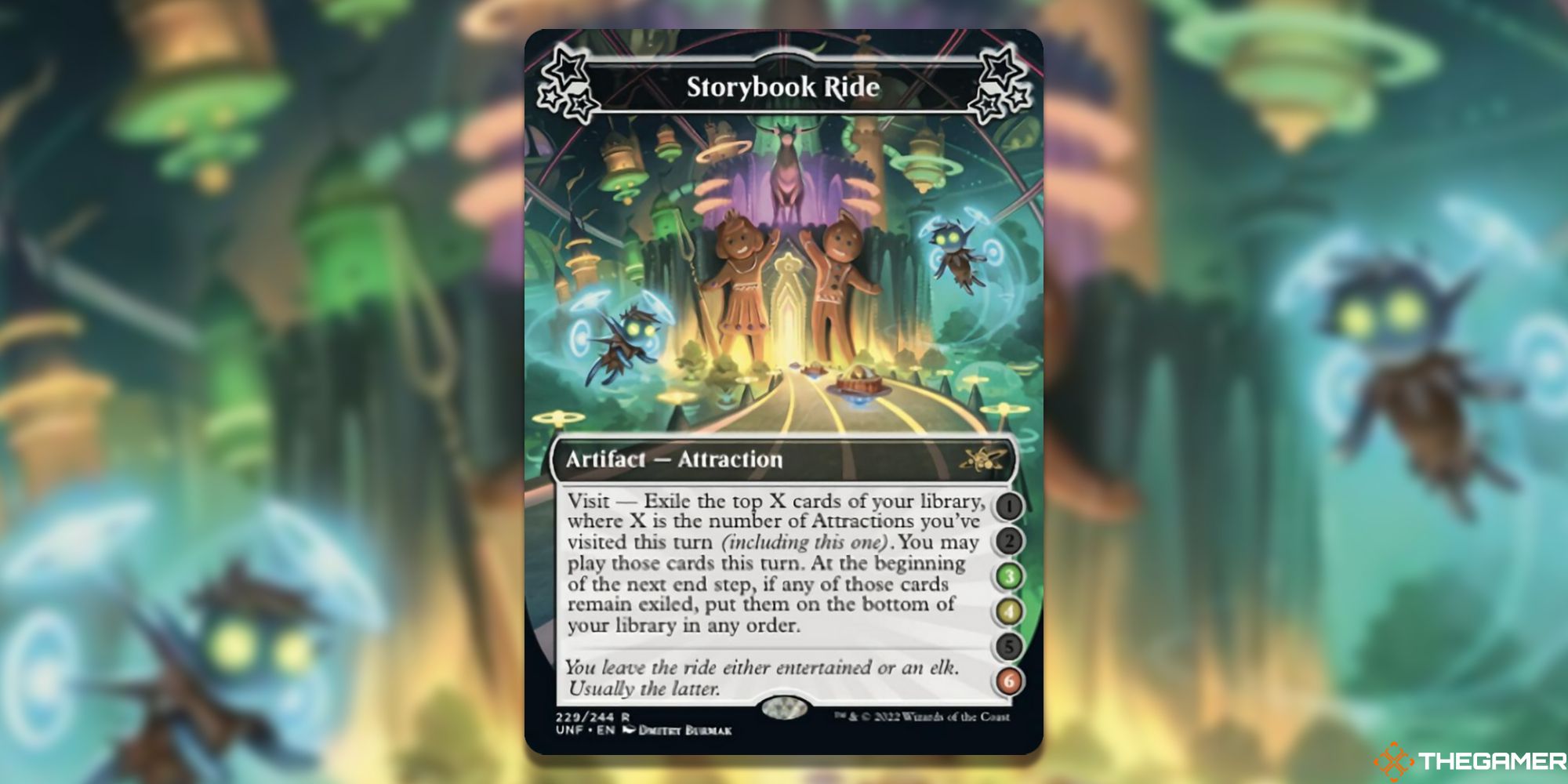 Of Unfinity’s attractions, a new card type that showcases the various rides and games available at the park, Storybook Ride is perhaps the most evocative. Parodying both wholesome rides like Disney’s “It’s a Small World”, and Magic’s own take on fairytale whimsy, Eldraine, the piece maintains Unfinity’s sci-fi edge by including a pair of mechanical fairies, with electric wings and haunting headlight eyes.

The genius of this piece is its balance, however. Despite making fun of fairytale rides and adventures, this ride still looks like a great time. Although it is flanked by giant gingerbread men, the castle in the background still looks imposing and worthy of conquest. It’s a delicate blend of humour and serious worldbuilding, and it works brilliantly. 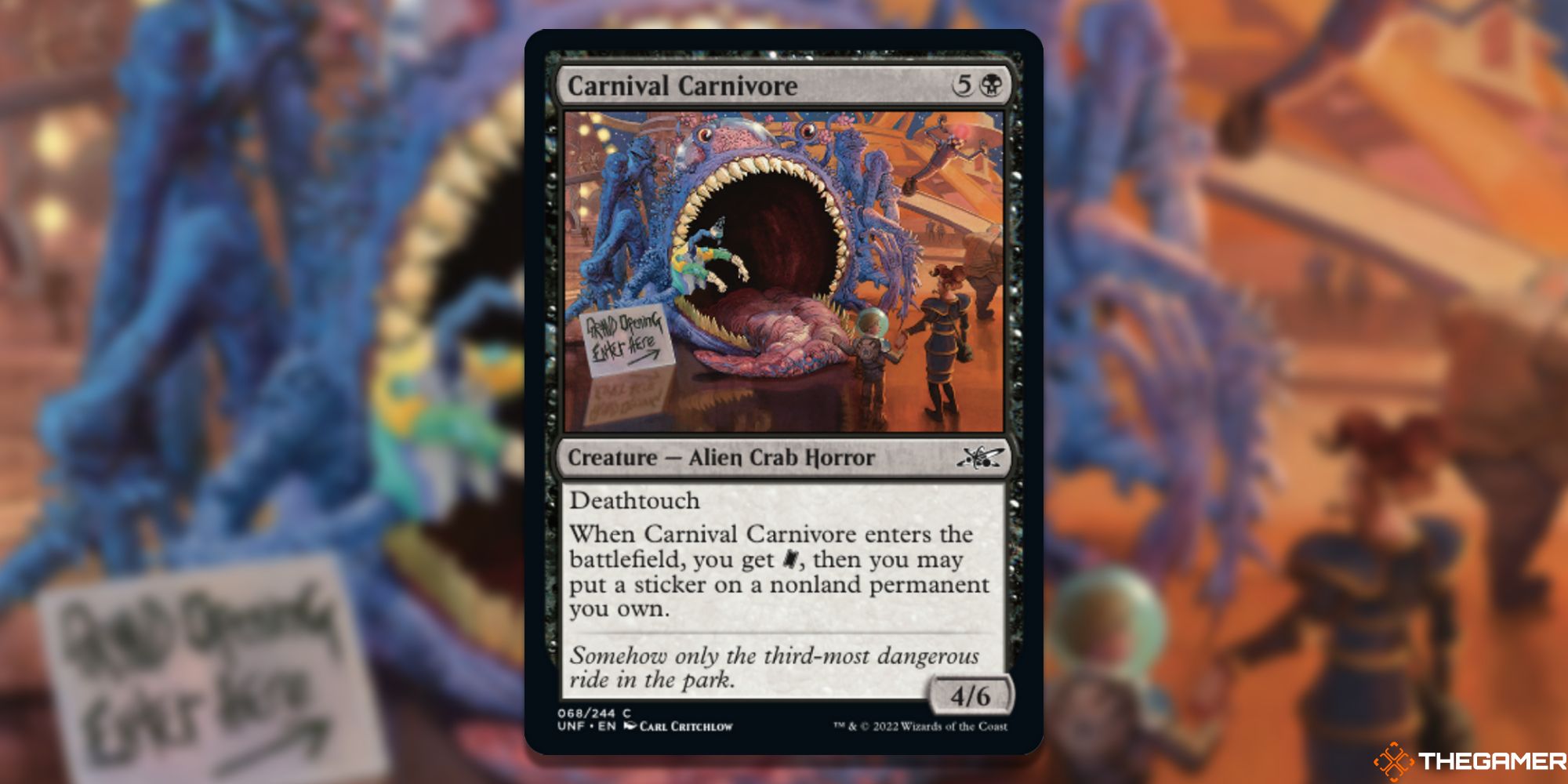 Some of the best Magic art tells a full, self-contained story, and this piece does just that. The amusement park equivalent of an angler fish, the Carnival Carnivore lies in wait, using a poorly-scrawled sign to draw in unsuspecting victims.

Unsuspecting because, in the context of Unfinity’s world, this creature could very well be just another ride. The piece is technically well-executed, but what elevates it is the dark humour it’s drenched in. The horrific creature's rows of teeth and spiky crab legs, combined with the small child asking to go on the ride in the foreground, create a narrative we’re glad to see only a brief glimpse of. 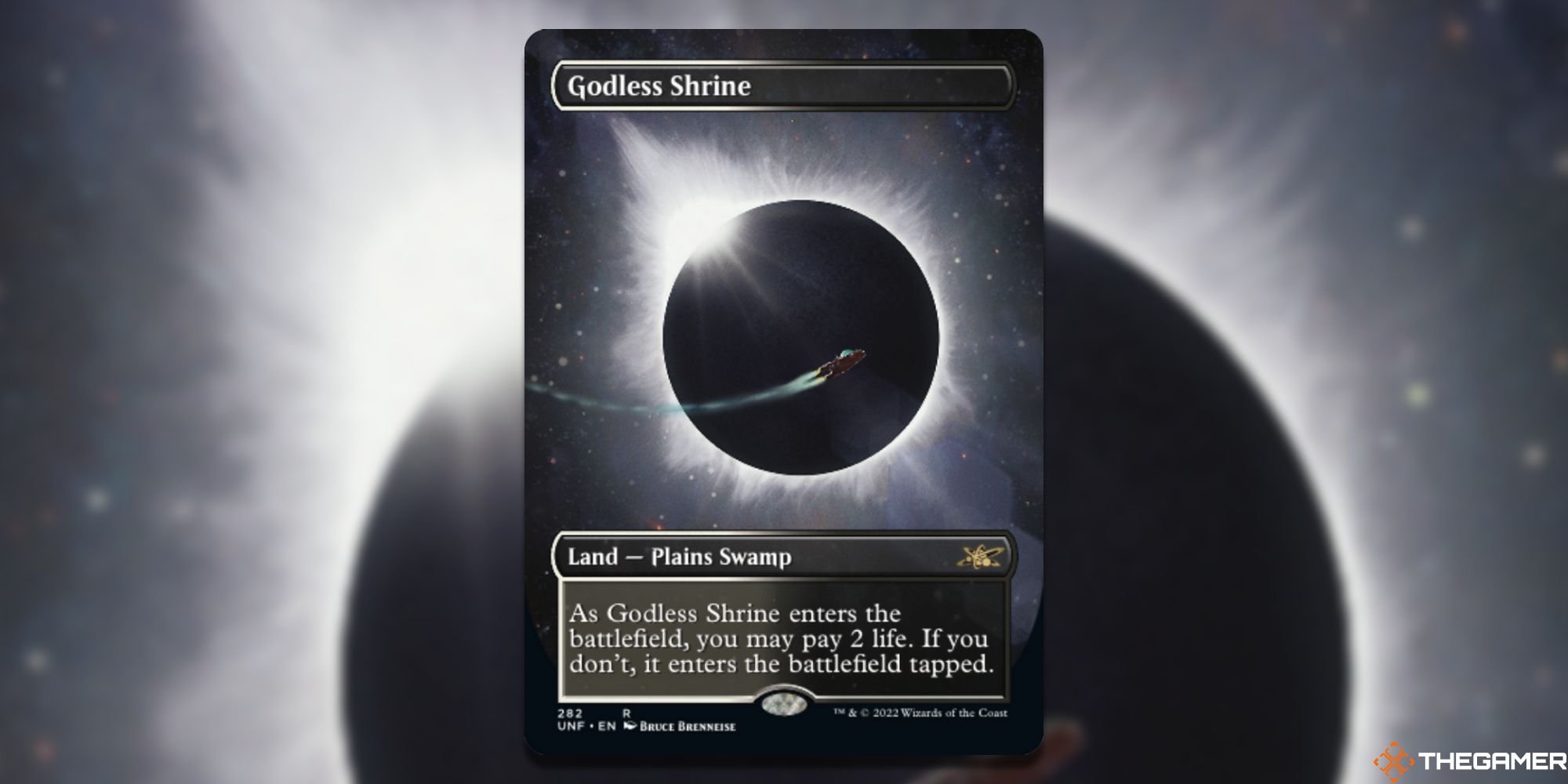 All ten of the full-art shocklands in Unfinity are beautiful, and any one of them could have claimed this spot on the list. We’ve gone for Godless Shrine, however, for its simple but incredibly effective take on the land.

Showcasing a solar eclipse, Brenneise makes great use of black and white here. It features a black central moon defined only by the spaceship passing across its surface, ringed in brilliant white light from the obscured star behind it. The use of a lens flare effect in the foreground, as well as the painterly nature of the space in the background, make this one eclipse you’ll want to look at directly as often as possible. 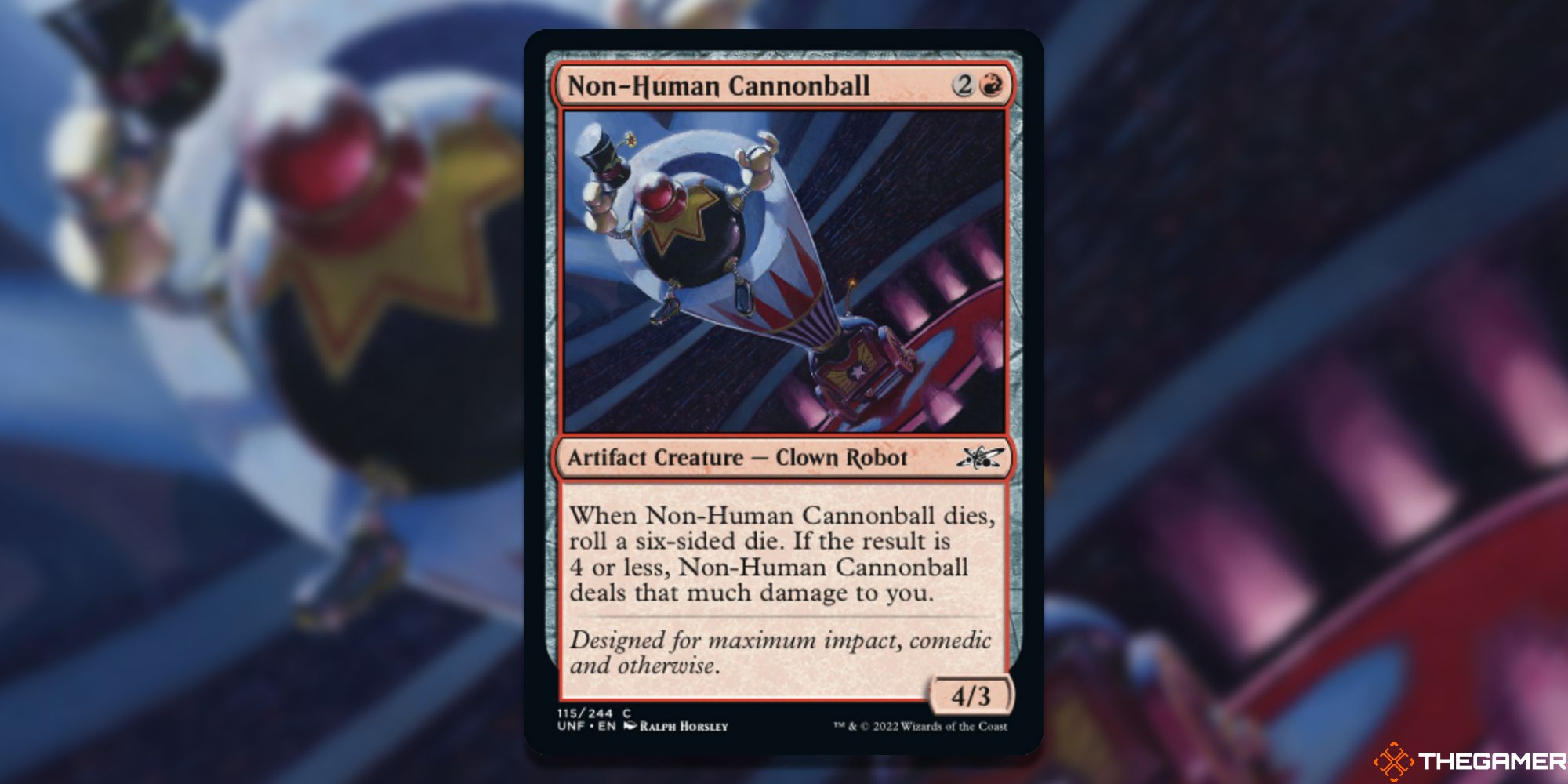 Ralph Horsley puts a futuristic spin on a well-worn circus trope here, subverting tradition by casting a robot as the cannonball rather than an unfortunate performer. Typical of Horsley’s work, the use of perspective here is excellent. It gives the viewer a look not just at the full scale of the cannon itself, but also at the whole surrounding arena with its seating and spotlights.

The star here though is, of course, the robot. Charming in the classic Pixar sense, it conveys personality through small touches such as the way it holds its hat or dangles its legs off the edge of the cannon barrel. It’s immediately appealing, making its impending launch a sad prospect. 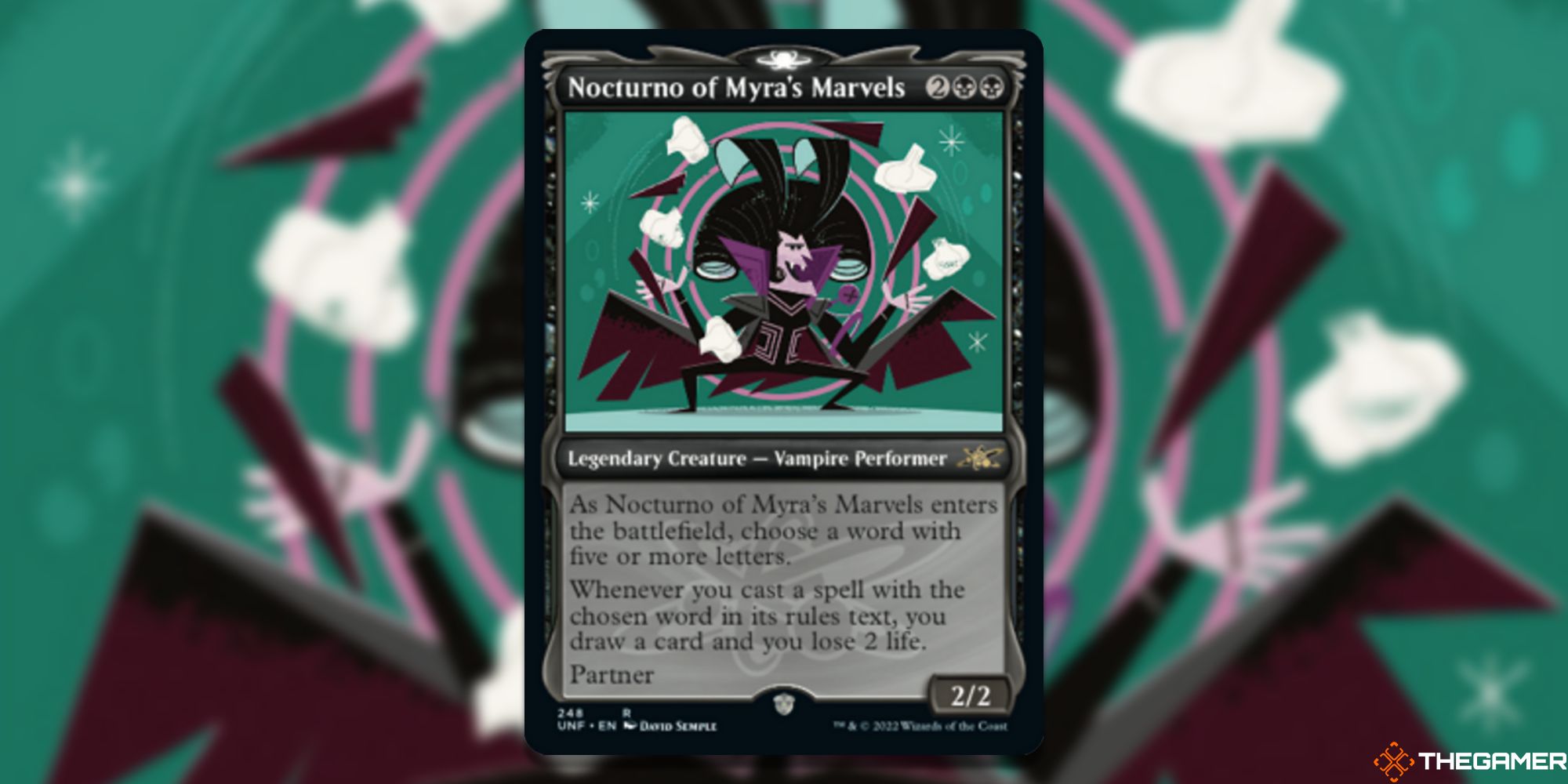 Unfinity’s Saturday morning cartoon Showcase style features on a number of great pieces. However, the one that benefits from this treatment the most is Nocturno of Myra’s Marvels, the black member of the titular quintet.

The joke about a Vampire juggling stakes and garlic plays much better here, since the viewer can see both more clearly in 2D. The exaggerated hair, cape, and vampiric facial features all translate brilliantly into the cartoon art style, creating a performer that feels truly larger than life. 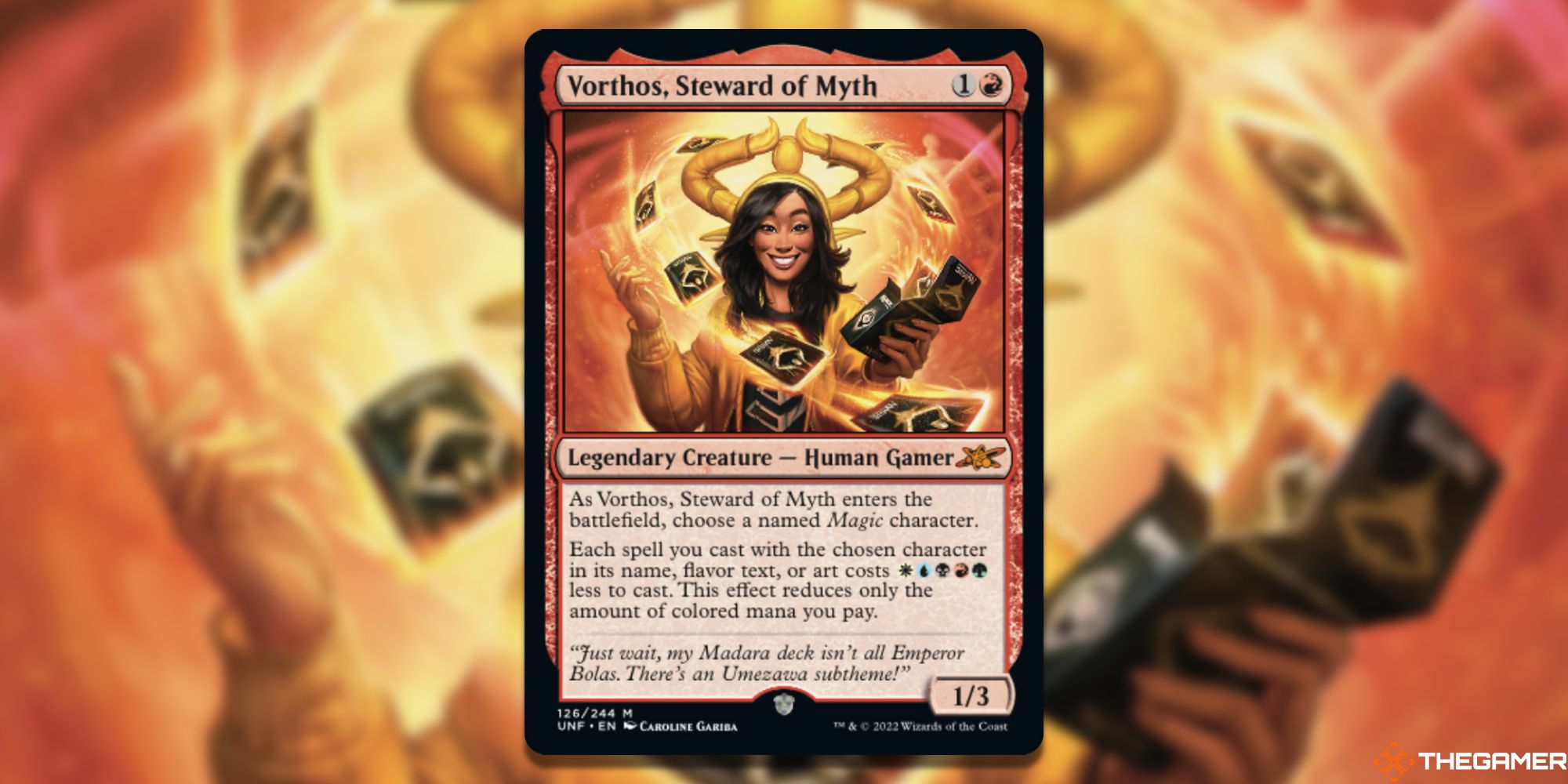 Part of an ongoing cycle of Un-cards that manifest the different Magic player types, Vorthos represents players who enjoy the story and flavour of the game above everything else. This is cleverly conveyed through the card’s artwork, which depicts a character wearing a Nicol Bolas hoodie, using Nicol Bolas sleeves, and sporting an Amonkhet (the plane Nicol Bolas took over) tshirt. Clearly, someone is a superfan of Magic’s biggest supervillain.

The bright, dynamic reds and oranges used create an eye-catching composition while also conveying the sheer passion of the character shown. It reflects just how invested we can all get in our favourite fictional characters.

1/10 It Came From Planet Glurg, By Marco Bucci 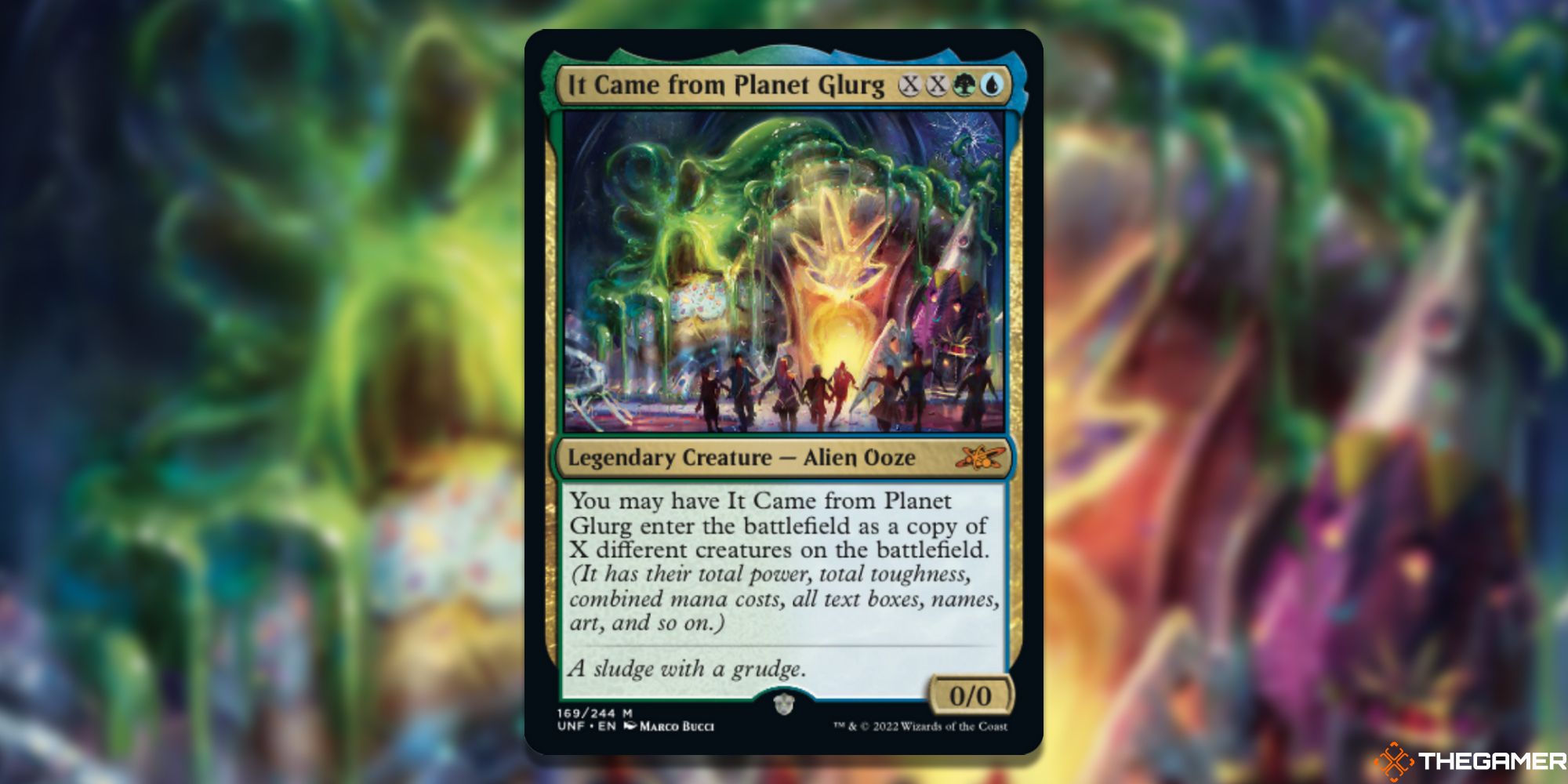 Of all the many Oozes in Magic’s long history, this one may have the most convincing artwork. This is because the nature of the creature itself is built into the style of the piece — just as the ooze drips and melts over the scene, so too does the scene itself appear to drip and melt, owing to the painterly brush strokes and lack of hard lines present.

Everything blends together to an extent, from the shadowy figures fleeing into the foreground, to the components of the partially-digested ride in the back. It’s a dazzling take on a classic sci-fi monstrosity, and a rare marriage of form and function in the world of Magic artwork.