As the Abbey is the player hub for Midnight Suns, it holds numerous points of interest and areas to explore, with many facets being upgradable only a few hours into the story. The available upgrades include ones for The Yard, the War Room, and The Forge, increasing your team's overall strength and powers.

The Yard focuses on card and ability advancements. The Forge is mainly for research, combat items, and Gamma Coil improvements, whereas The War Room, focuses on rewards and improvements to Hero Operations. All of these upgrades come into play eventually, but there are some to prioritize. 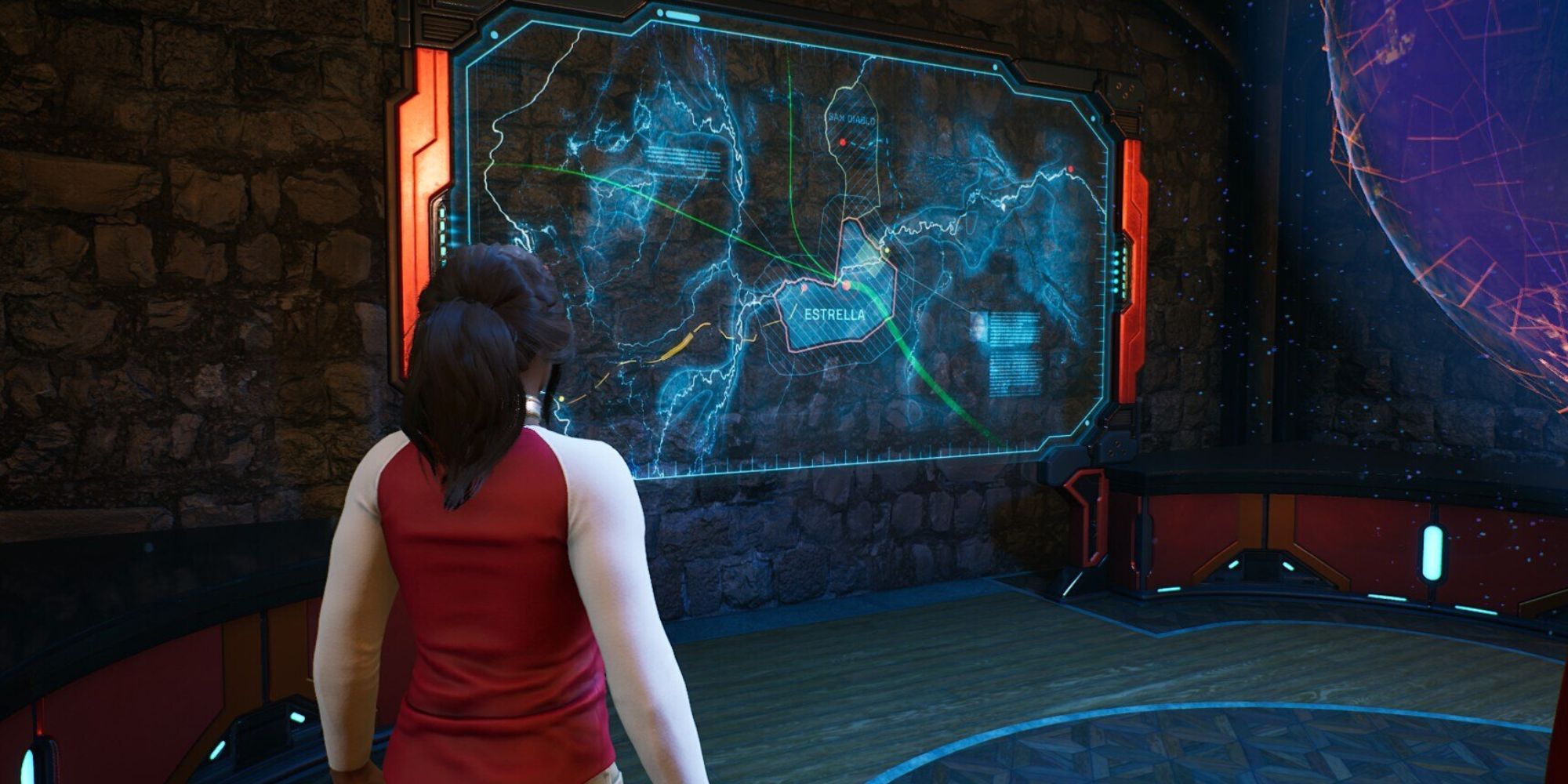 Hero challenges are shown at the beginning of every mission at the Mirror Table overview, only unlocking after obtaining the SITREP War Room upgrade. Each mission will have a randomized challenge that can cover just about anything, and are additional objectives to aim for during that particular outing. Completing these challenges will usually reward you with Credits, but you'll need to pay forward Intel to select them.

It's one of the early upgrades you can get, so it's definitely worth investing in since each challenge beaten will make gathering Credits that much easier. 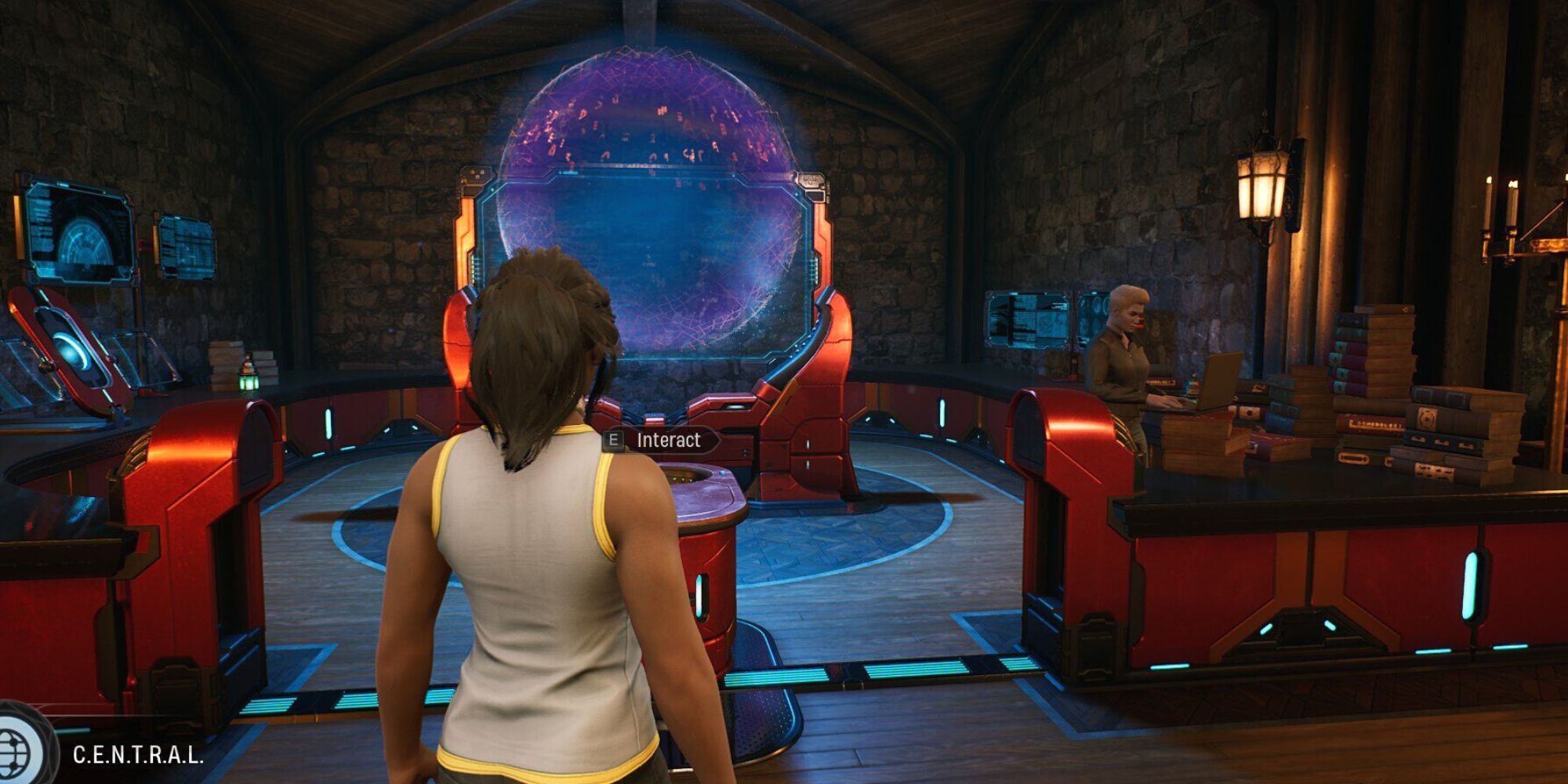 While fighting Hydra, you're sometimes given a chance to use a card play to interrogate a Hydra enemy. Interrogating them will reward you with Intel which can then be used towards unlocking Hero Ops – and every Hero Op grants abilities to the hero who was sent on the operation. These operations take a day to complete, with ability rewards ranging in rarity.

The standard card play number is three a round, and interrogating an enemy will knock these plays down to two during the round it's used. 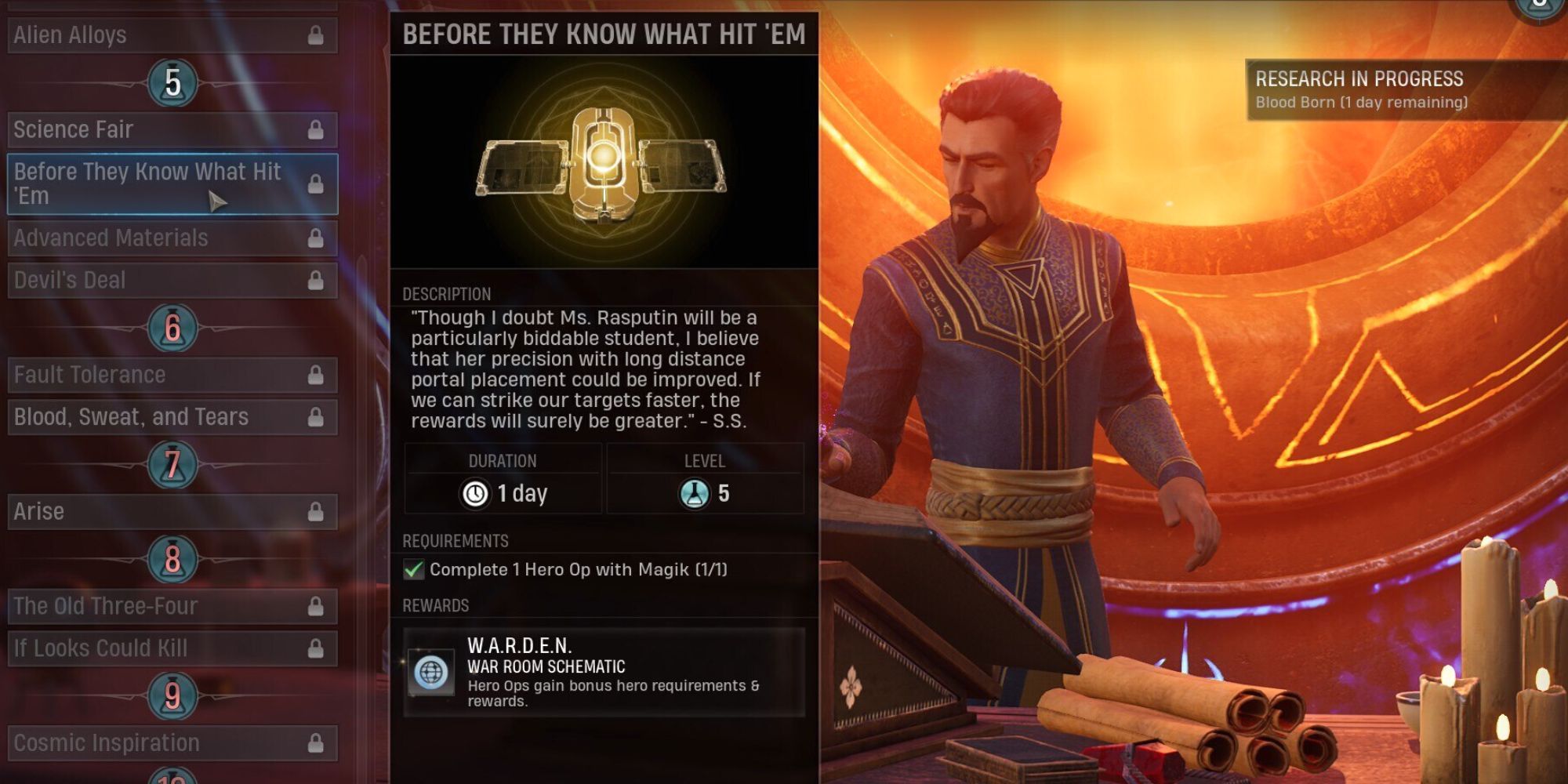 The 'Before They Know What Hit 'Em' upgrade adds an additional requirement to every Hero Op, giving you bonus rewards if met. You don't have to hit this requirement to run a Hero Op, as they're optional, although they're worth meeting if you want the top-tier abilities complete with card modifications.

Requirements usually ask simple tasks like selecting a Scientific hero (Spider-Man, Iron Man) or selecting a Mutant (Magik, Scarlet Witch, Wolverine) for the mission. And while yes, completing this does grant greater rewards, the one-day time taken to complete an operation never changes. 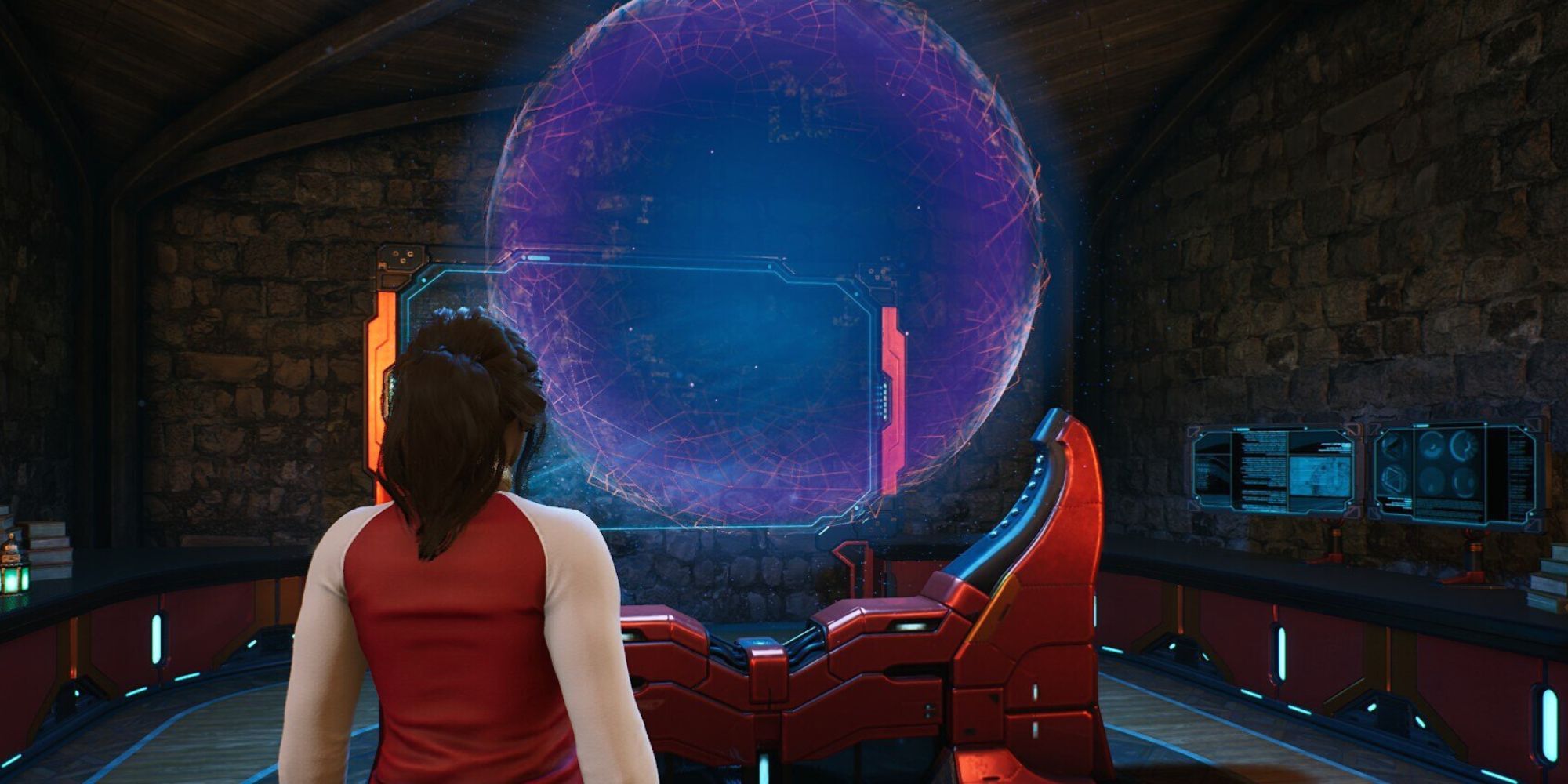 Intel is needed to run Hero Ops, and Intel caches are required to generate the same Ops. Neither can run without the other, and there's no reason not to have one active whenever available. Alien Alloys gives you more Intel when you decrypt a cache at The Forge and lets you run two Hero Ops simultaneously, which is a notable advantage when all your current Ops are time-sensitive.

If you keep on top of the general missions which reward Intel caches, you can follow a steady pace of completing two Ops every day for a few days to a week. 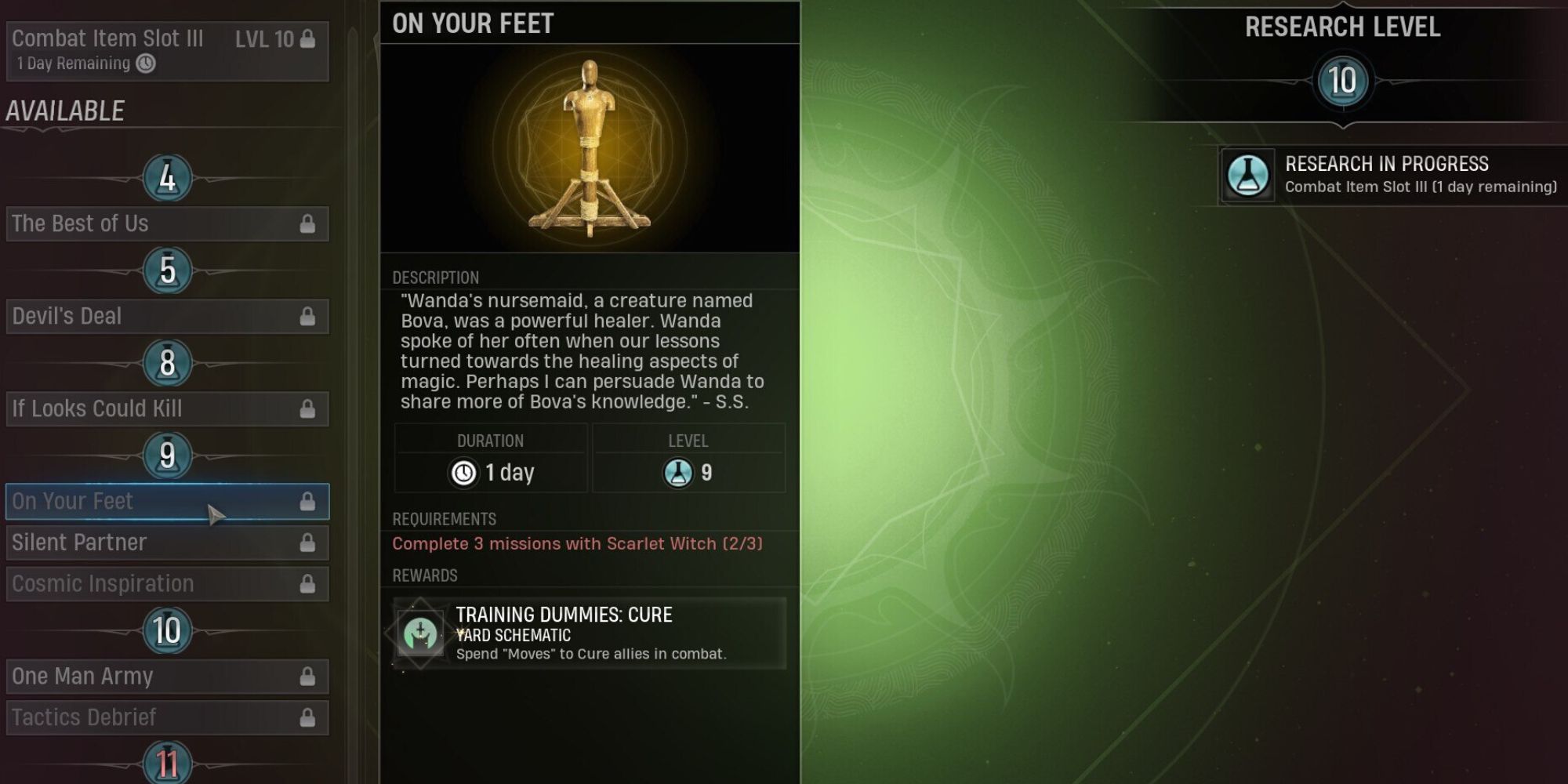 When an ally is affected by bleeding, stun, or any other type of debuff, it heavily alters the flow of combat, pushing it in favor of the opposing side. You'll want to remove these debuffs as soon as possible, even if it takes up a move or a card play. It's imperative that you deal with them before attacking again as the afflicted character.

Unfortunately, you might find yourself in an uncomfortable position where you're out of combat items with the Cure status. The On Your Feet upgrade can cure a teammate by using up a move. 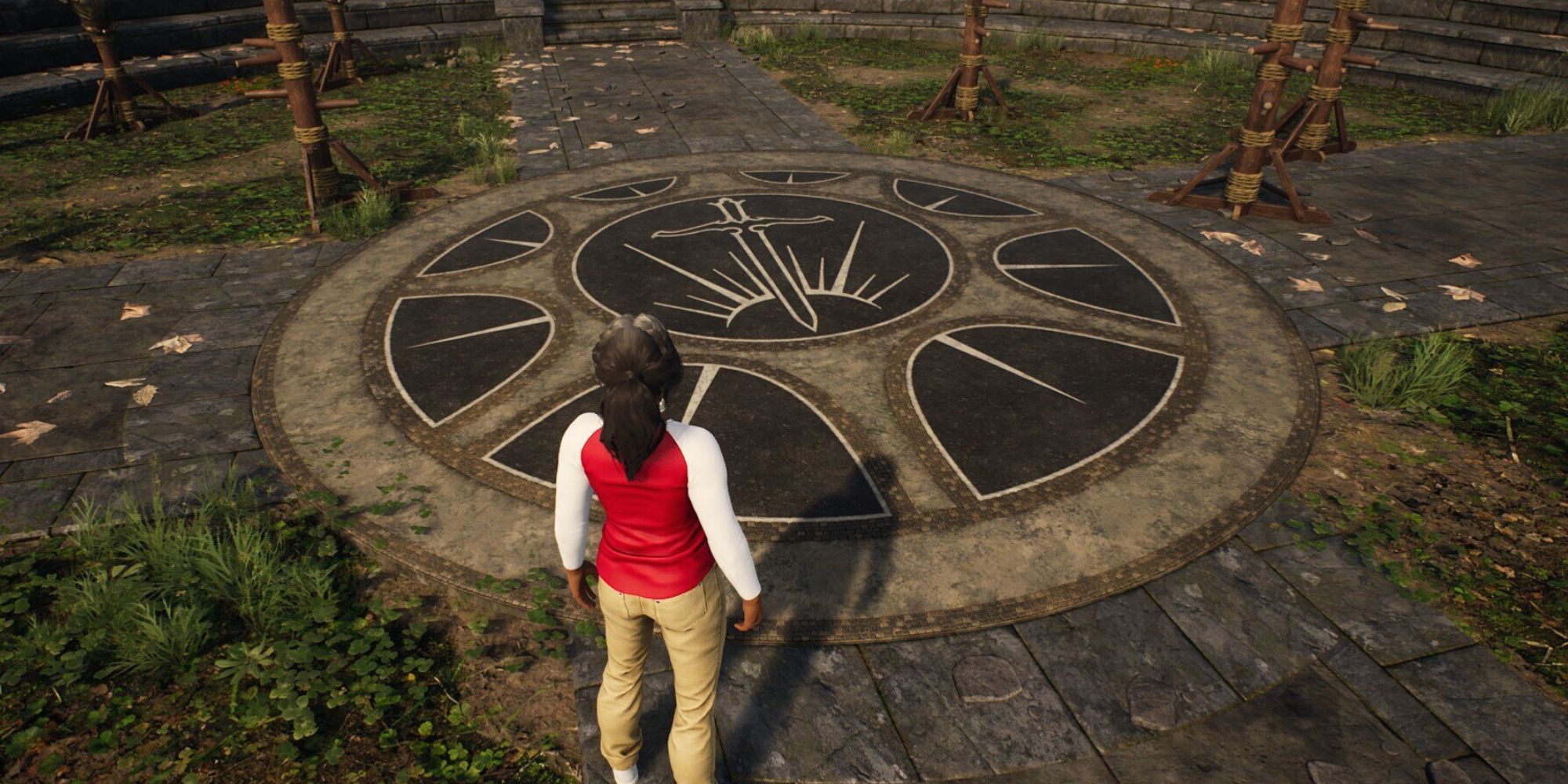 The second of the Yard upgrades allows you to modify a card, giving it additional abilities such as gaining block damage when redrawing the selected card or dealing extra damage to a foe when they're stunned. These are vague examples, but each card with a mod attached follows a similar idea.

You'll know when a card is modified if there's a golden star on the top left, and they're always worth equipping over standard upgraded ones. 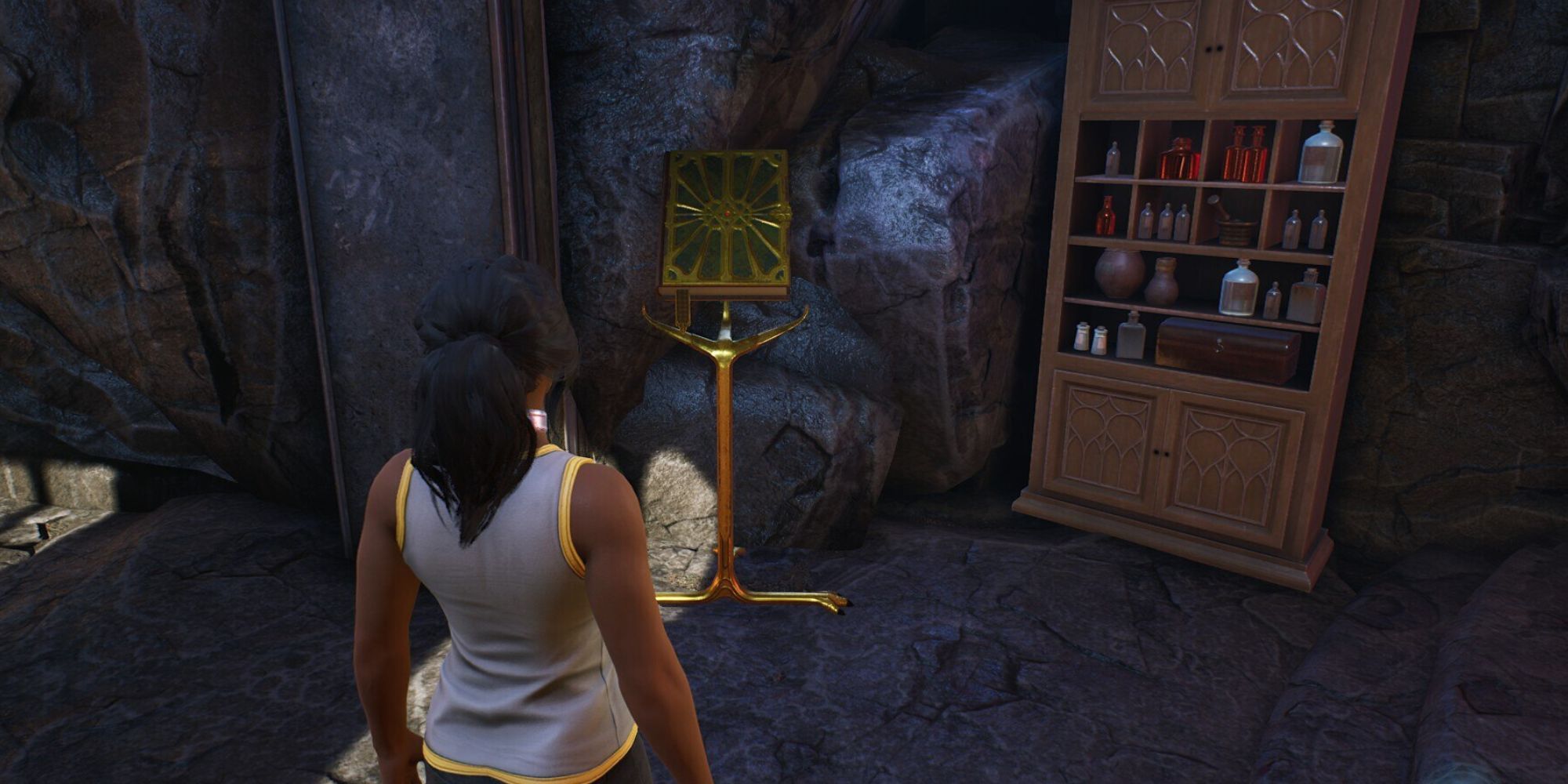 Earning cards through opening Gamma Coils and participating in clubs is the standard way to ensure you acquire a few cards to play around with, but after researching the Book of the Vishanti, there is a far simpler way. This Forge upgrade allows you to craft hero abilities using blueprints (rewards for some general missions), only taking one blueprint per card and Essence.

Book of the Vishanti will also add a "Blueprint Exchange" tab in the Forge menu where you can exchange blueprint types for a different rarity of blueprint. 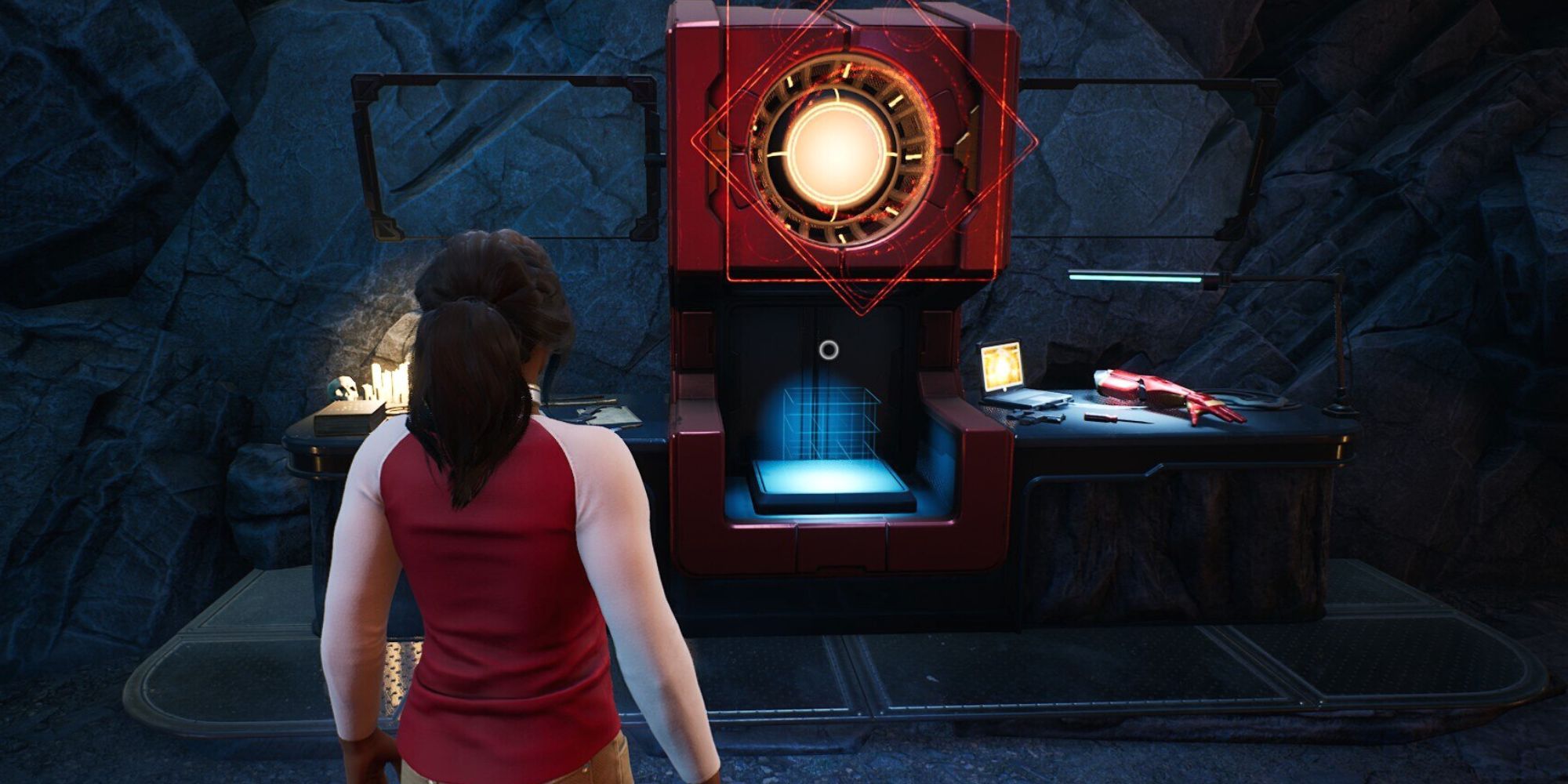 Before researching Science Fair, you'll be limited to the rarity of combat items and, thus, how beneficial they are in aiding your team. If you complete the project as soon as you hit research level five, you'll unlock additional items you can craft at the Item Bench.

This and Agatha's Cauldron are your one-stop shop for all things extra assistance; if there's a way to boost your chances, you'll find them here, and if you want an edge over a daunting boss, you'll need the Science Fair upgrade. 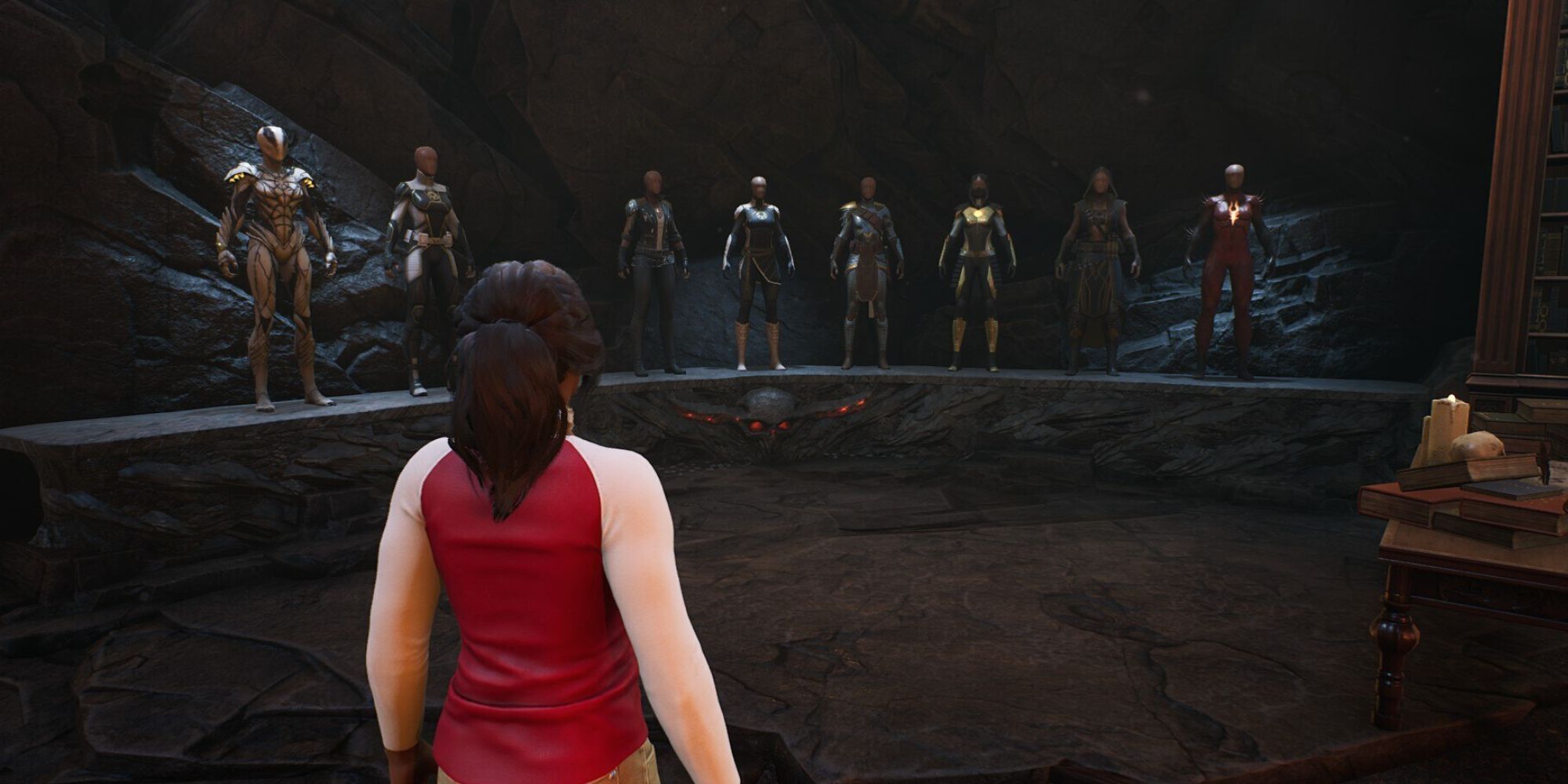 Forged in Hellfire unlocks the Armory upgrade, providing Hunter and the team Midnight Suns challenges that can be completed to unlock both legendary outfits and abilities. The first mission under this section is for Hunter alone and will give you a powerful ability card and Midnight Sun outfit.

To unlock the rest, you'll need to reach the top level of friendship with a hero, allowing you to complete their challenge. They are worth collecting since there isn't another character-specific powerhouse attack like it in the game. 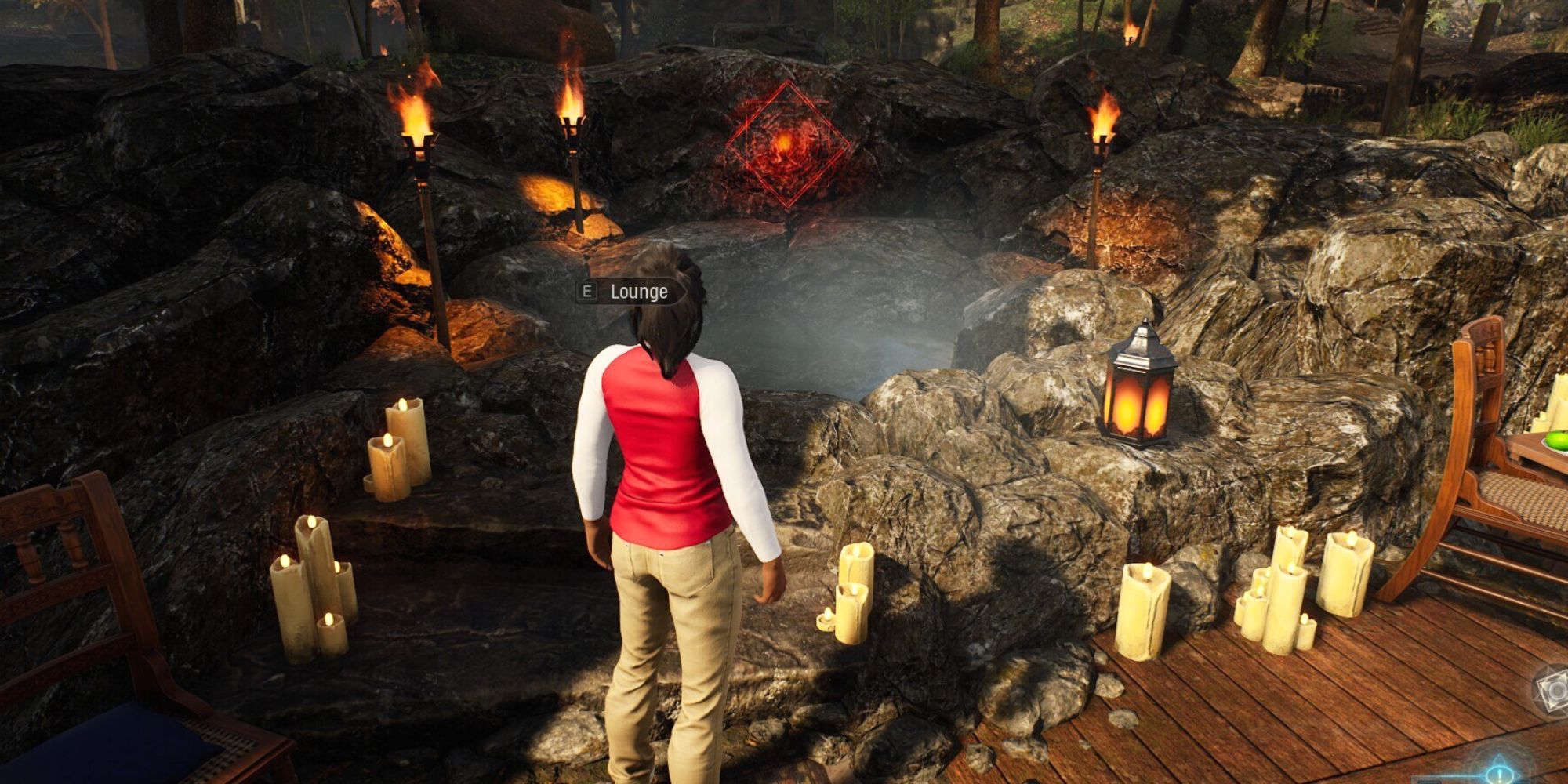 Combat Therapy is mentioned quite a bit on loading screens and is one of the most exciting parts of The Abbey. Once you reach research level three, you can complete the project "Mystical Healing" to unlock Nico's Combat Therapy and then place heroes with injuries inside it to let the healing do its work over the day.

A hero can only go to Combat Therapy if they've sustained a combat injury and will be locked out of participating in missions until the following day. Losing these heroes (if only temporarily) can become a significant drawback, but don't worry, as your team will gain a buff from that same hero if you take them on a mission the next day.