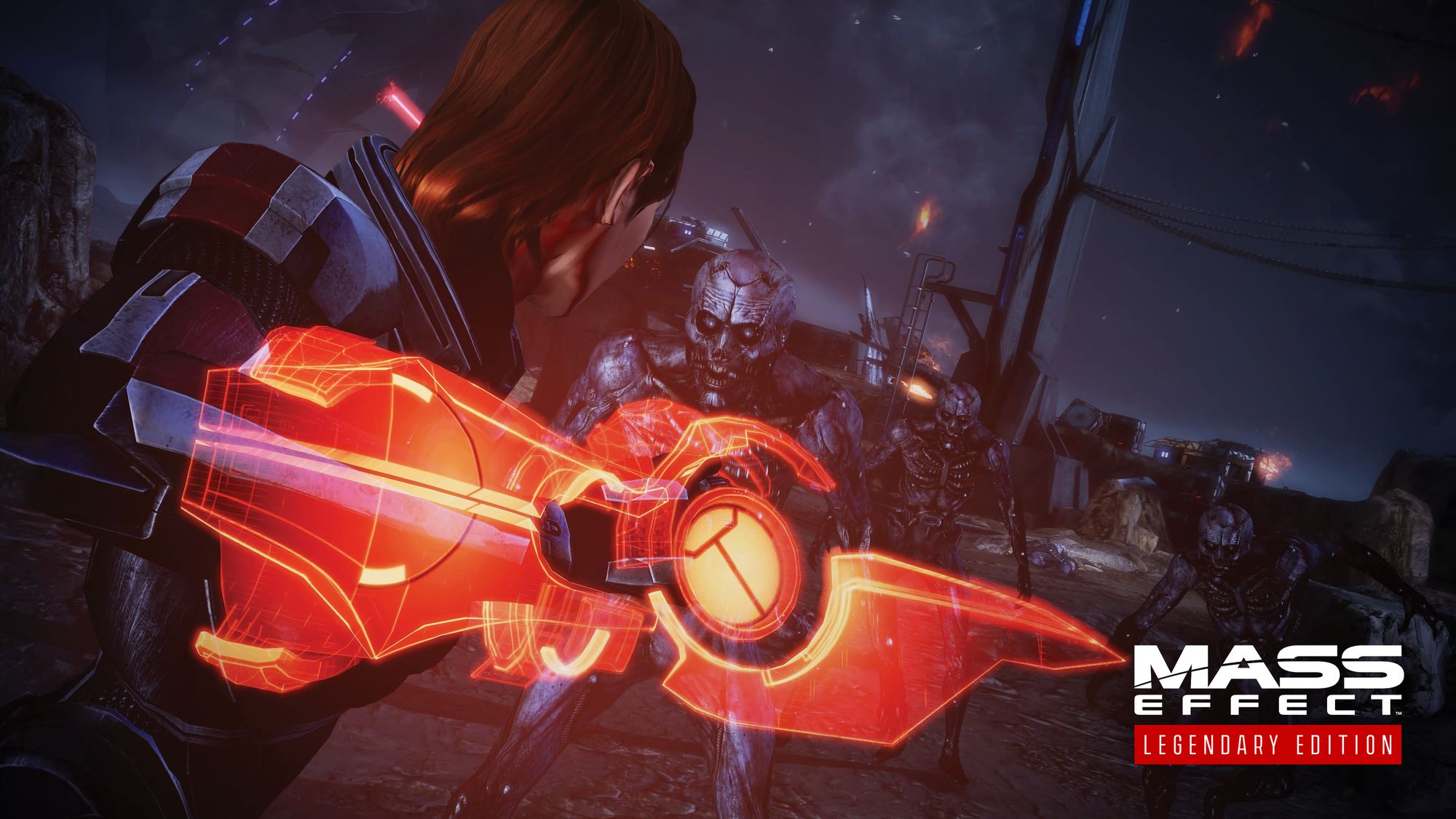 The Mass Effect trilogy is getting the remaster fans have always dreamed of, as GameCentral speaks to the BioWare developers responsible.

It seems fair to say that the last few years have not been the greatest in BioWare’s long history. After the release of Dragon Age: Inquisition in 2014 things suddenly began to go wrong for the much-loved studio, with the cancellation of Shadow Realms and the failure of Mass Effect: Andromeda and Anthem. Previously lauded as one of the best action role-player developers in the world their crown has been slipping, but their hope is that remasters of the original Mass Effect trilogy will help to put it back in place.

Remasters of the Mass Effect trilogy have been rumoured for years, although for much of that time they existed nowhere but in fans’ imaginations. Remastering three 30+ hour role-playing games requires no small effort but it’s one BioWare has now committed to and we got to see a sneak peek of their progress so far and briefly speak to the developers involved.

For those not familiar with the series it’s an easy sell, since it’s a sci-fi action role-player with third person combat almost as good as a dedicated action game. It also has a highly memorable ship’s company that you can make friends with or even romance, and there’s an epic story of galactic Armageddon that uses saved data from previous games in each of the subsequent ones – so that choices you make are reflected all the way through the adventure.

Mass Effect Legendary Edition was announced last year but until this month nothing was really shown of it. Now though, there’s not just a reveal trailer but a confirmed release date of May 14 on Xbox One, PlayStation 4, and PC. The collection includes all of the single-player content from all three games, including more than 40 DLC extras. The only thing that won’t be there are the multiplayer elements from Mass Effect 2 and 3, but while they were surprisingly good they were almost entirely separate from the story campaign.

The remaster collection has been designed for the last gen consoles but BioWare are promising it will be ‘forward compatible’ with the Xbox Series X and PlayStation 5, including much faster loading times. All versions, though, will feature new character models, improved textures, shaders, and visual effects; as well as updated lighting, dynamic shadows, real-time reflections, and depth-of-field effects. The games are also promised to run at a steady 60fps on all but the base Xbox One and PlayStation 4.

Although these are not remakes, the amount of work that’s being put in goes well beyond just increasing the resolution and calling it a day. Importantly, BioWare have chosen to adjust some gameplay elements, especially in the first Mass Effect – which was much more of a traditional Western role-player than the more action-orientated sequels.

As such, combat and exploration has been brought more in line with the later games, including the handling of the Mako vehicle, and there are changes to the interface, and the addition of new details to locations such as Eden Prime, Ilos and Feros. That will be controversial with some fans, some of whom would’ve preferred the sequels become more like the original, but consistency is important and this is the only way round that was ever likely to work.

‘For Mass Effect 1 we took the rough edges off it and tried to reduce the delta between 1 and 2, because 2 and 3 had a very similar look and feel and 1 tended to feel very dated. So we spent more time trying to bring it closer to 2’, says project director Mac Walters.

‘There were underlying systems that made it more like an RPG and less like a shooter, but there were other systems like camera, movement, aiming, and things like that that we had improved over the course of the trilogy. So bringing those into Mass Effect 1 was a no-brainer and we tried to just smooth out your overall experience’, he added.

‘Reducing the friction from that gameplay but not inherently or fundamentally changing how you progress through the game, how you invest in the squad talents and the class systems and things like that. That was important.’

That logic has also led to BioWare unifying the character customisation features across all three titles, while adding additional hair, make-up, and skin tone options – as well as FemShep from Mass Effect 3 as the default appearance in all three games.

Initially viewed as only a minor option, that most would not use, the female version of Shepard rose to fame thanks to the excellent voice performance of Jennifer Hale, which was inarguably better than the male version. For much of the time though the female character model used animations originally created for the male version, which where less than ideal in some circumstances.

‘Animations were tough across the board’, says character and environment director Kevin Meek. ‘We have this thing called the look-at system that tells characters in the scene where to look and, of course, if it gets too close you get those memes of people being cross-eyed that we were able to now kind of tweak and adjust.’

We ask after the meme where male Shepard’s head spins round, which was always our favourite, and it turns out Meek has already checked for it.

‘You actually have to, from my understanding, mod the game or get camera access [to see it]. So early on I was like, well geez, we got to fix that. But then as soon as we realised you couldn’t see it actually happening in game we made a point of leaving that in for people. So if you still want to be able to go and capture that 4k HDR and get a new meme out of that, that’d be good.’

‘But specifically for female Shepherd, I think there was a lot of things that we could do across the trilogy to make that better, so that she’s a bit more on par with male Shepherd’, says Meek. ‘Whether it be just some subtle face shape changes or some wrinkles or support or whatever, so she’s catching the light and the same kind of quality level.

‘And then specifically around the animations, we couldn’t really change a lot of those, but there were times where you could change the camera to not focus on one of those animations. So a male Shepherd animation would have him sitting with his legs quite wide open with a low camera where, if you were wearing a skirt, it would be a bit unflattering. So we can’t necessarily change that animation, but you can raise that camera up slightly to reduce the problem.’

It’s not just the technology that has aged in the original games though, as it’s hard to imagine the Asari, a species of all-female space Amazons, or EDI’s robot form being created in quite the same way for a new game today. They are popular characters though, despite accusations of them pandering to a male audience, so we were curious as to whether there was any thought to alter their portrayal in the remasters.

‘I do think a lot of things have evolved since [the original games] but I don’t know if I would say we were ultra-concerned about it or anything like that, but there were considerations’, admits Walters.

‘Kevin actually called out some camera cuts that were just… why was that focusing on Miranda’s butt? So in some cases we said, ‘Okay, we can make a change there’. But ultimately, to change an entire character model or something like that wasn’t really… it was a decision that was made as part of many creative decisions and just showing it at the best possible fidelity that we could going forward is really the choice for all of the art that we had.‘

There’s one other even more controversial topic when it comes to Mass Effect though and that’s the ending of the final game, which was so unpopular with fans BioWare were compelled to release an ‘Extended Cut’ to try and placate them. That will be used as standard in the remasters but it never really addressed the issues most had with the ending and yet, as we admit to Walters, it’s hard to see how it can be changed without creating a significant amount of new content.

‘Exactly!’ he laughs, although somewhat grimly. ‘Whenever we’ve ever discussed doing the remaster, I think you put all options on the table to start with, right? But you need to keep what I think is the heart of what the franchise was, what people remember it to be – which is the choices that you made, the characters that you meet, the encounters you’ve had with them – and sort of draw a line in the sand and say, ‘No, that is what people loved and that’s what they remember’.

‘And sure, you know the controversy around the ending. And we understand, I certainly understand, how that didn’t hit with some people. But I don’t think you suddenly just go in and try to change anything in that regards.’

No one will talk about the recently announced new Mass Effect game, not even whether any of the people we talk to are working on it, but we ask anyway, at least in regards to whether the saved data content generated by the remaster trilogy will be used in the new game.

Walters takes a long pause before considering whether to answer but says, ‘I think anything is possible and feasible. It’s just… you have to look at what the goals and the direction of what the future of the franchise is going to be.’

We’re also curious as to whether playing through the original trilogy again, in such forensic detail, has inspired anything for the new game, by highlighting forgotten features and ideas.

‘We did a lot of research and we looked at the internet forums to see what did people talk about in the trilogy. What did they like? What was the friction for them?’, says producer Crystal McCord McCord.

‘We brought in some community cosplayers, modders, and players, and had a community group with us throughout production that we had a lot of discussions with. And we said, ‘If we’re looking at adjusting things, what would you suggest?’ To kind of see what they thought, what’s the buzz out there, and really try to connect with the community and see what their thoughts are and what can we take away from that. And, maybe, are there some things that we can improve within the restraints that we have?’

The Legendary Edition is certainly the most ambitious and thorough remaster we’ve seen for a long time and despite how long fans have been waiting for it, it does genuinely seem to be exactly what they were hoping for. The original Mass Effect trilogy was always BioWare’s greatest creation and returning it to its former glory seems a very apt way of rejuvenating the studio as a whole.