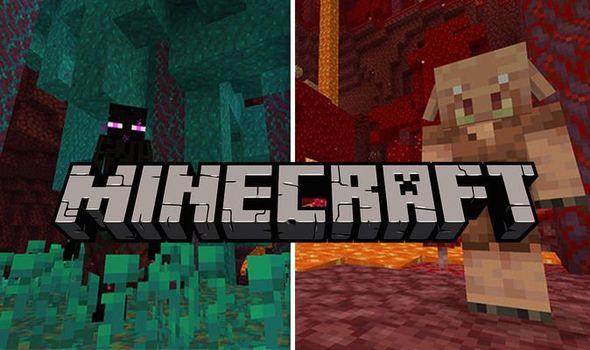 Minecraft fans are counting down to the release of the big Nether update on PS4, Xbox One, PC, iOS, Android and Nintendo Switch.

The next major Minecraft update has a June 23 release date on consoles and PC. There’s currently no word on an exact launch time, so check back soon for confirmation.

The new update introduces a whole host of new features, from Biomes and blocks, to new MOBS and crafting items.

Minecraft fans will be able to play around with the new Pure netherite block, which is described as “the strongest, most durable material in Minecraft”. Players can craft it by combining nine netherite ingots.

Players must also beware of Hoglins and Piglins, although the latter are willing to trade with players for the right goods.

Target Blocks are one of the more interesting new additions. They’re described as Redstone components that can be activated with projectiles.

“The Signal is stronger depending on how close the projectile is to the center of the block,” Mojang explains. “The signal strength goes up to 15.”

You can check out a selection of the Minecraft Nether update patch notes below, or see the full list of changes by heading over to the Minecraft Wiki page.

Created by right-clicking a lodestone with a compass.

Will point towards that lodestone.

Will keep them stacked.

Entering another dimension other than the one containing the right-clicked lodestone will cause the compass to shake uncontrollably.

Can only be found in bastion remnants.

Has a red disc color instead of black.

When played in a jukebox, a redstone comparator output will produce a signal strength of 13.

Upgraded using a smithing table with a netherite ingot and the respective diamond item.

Does not burn in lava, as a dropped item or when worn (players equipping netherite armor, however, can still take burning damage).

A volcanic biome in the Nether. Filled with pillars of basalt and large areas of blackstone. The air is filled with a light gray ash-like particle.

A dense forest with huge crimson fungi. Nether wart blocks and fungi are found in patches on the ground and weeping vines are found under the trees and nether wart “stalactites”. Fog effects are very similar to the Nether wastes biome.

A blue color variation of the crimson forest, but with somewhat different vegetation and blue particles and fog effects.

Endermen and striders may spawn here.

Are a hostile mob.

Have an adult and baby variant.

Can be bred with crimson fungi.

Are hunted by adult piglins.

Baby hoglins are not hunted and baby piglins do not hunt hoglins.

Will convert into zoglins when in the Overworld or the End.

Have an IsImmuneToZombification data value that prevents them from zombifying in the Overworld.

Adults are hostile; babies are passive.

Will not attack players wearing at least one piece of golden armor.

Adult piglins turn aggressive when a player is mining blocks of gold or opening/breaking chests, even if they are wearing gold armor.

The player can barter with them by right-clicking with gold ingots or dropping them on the ground, which makes them drop at least one item or block in return.

Baby piglins do not attack and adult piglins will not attack baby hoglins.

Up to 3 baby piglins can ride on the back of baby hoglins.

Can spawn with golden armor.

Will convert to a zombified piglin when in the Overworld or The End.

Have an IsImmuneToZombification data value that prevents them from zombifying in the Overworld.

Can be crafted with 9 netherite ingots.

Can be used as a beacon base.

Cannot burn in lava or fire.

Same blast resistance as obsidian, but is movable with pistons.

Crafted with a netherite ingot and chiseled stone bricks.

Using a compass on one creates a lodestone compass, which points to that lodestone block.

Its functionality applies in all dimensions.

Redstone component that can be activated by shooting projectiles into it.

Signal is stronger depending on how close the projectile is to the center of the block. The signal strength goes up to 15.

Can be crafted using a hay bale and 4 redstone dust.

Can be mined with any tool, but hoes are the most effective.

Does not need a redstone comparator to send a signal strength.