Monster Hunter Rise: Sunbreak brings us a huge amount of content to expand on the base game. The add-on centers on Master Rank, a difficulty level beyond High Rank. Master Rank will take you to new locales, introduce new mechanics, and throw a whole lot of new monsters at you.

Aurora Somnacanth, a variant species, trades sleep gas for ice attacks. It's also much more mobile than the nominate Somnacanth. The Aurora Somnacanth Urgent Quest stands between you and the second half of MR3, so you'll have to hunt it at some point. If you know how to prepare for this monster, it isn't a hard fight at all. 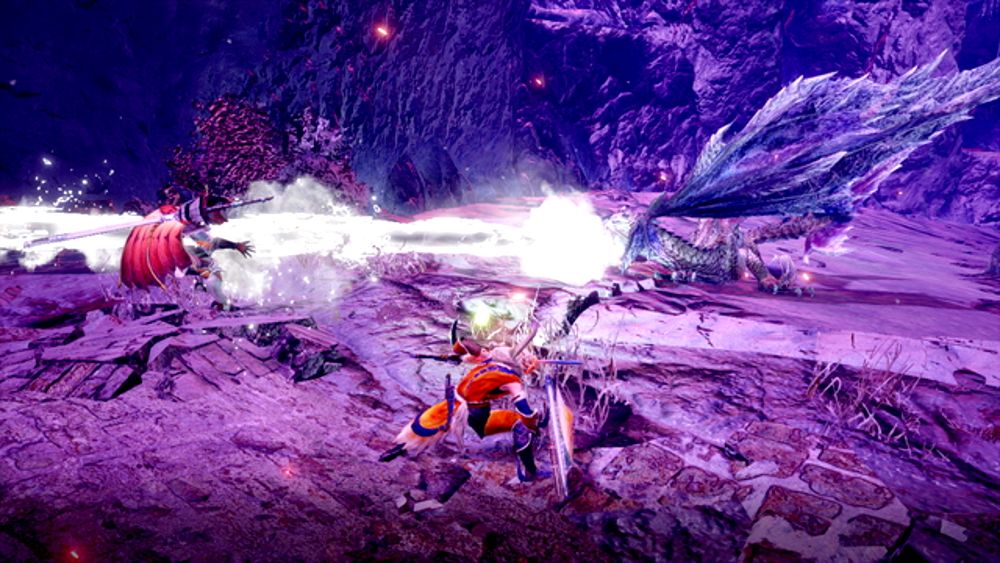 Aurora Somnacanth's most vulnerable points are its head and long neck. It is better to aim for the neck if you can. Somnacanth's head fin has its own hitzone values, which are not as good as the head or neck. Its hind legs and back are more resistant, and you can't cut its tail, so direct your damage towards the front. Blunt damage is the most effective overall, but only by a small margin.

Aurora Somnacanth is weak to Fire and Thunder, but resistant to Water, Ice, and Dragon. Although it does not inflict Sleep with its attack, it is still very resistant to the status. Blast is the most effective ailment against the monster. 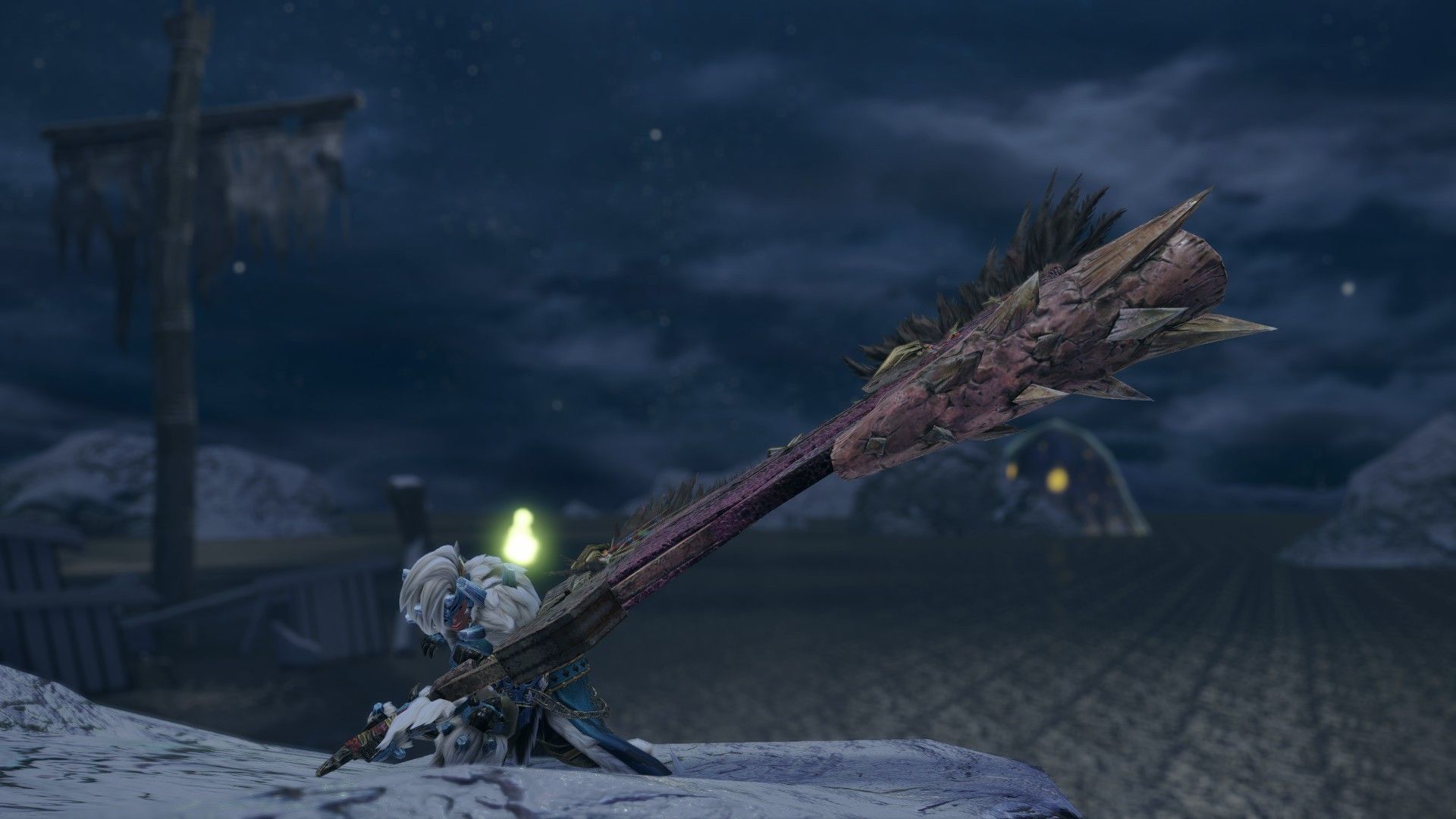 Queen Chordmaker +, a Rathian Hunting Horn, is the best choice for blunt damage. It has Fire damage, a bit of white sharpness, and great defensive melodies like Divine Protection. If you'd rather go for elemental damage, try the Anjanath Switch Axe, Gnashing Flammenbeil +. The negative Affinity value looks bad, but Affinity only affects physical damage. Hitting one of these "anti-crits" will not affect your Fire elemental damage. This Switch Axe also has Element Phials.

You fought Goss Harag and Barioth earlier in MR 3. Their armor sets have two things in common that make them very useful against Aurora Somnacanth. One, they have great innate Ice resistance. Two, they both have the Quick Sheathe skill. If you can sheathe your weapon quickly, you can get your Wiredash out faster to dodge Somnacanth's ice beams and explosions. Mix and match parts from the two sets to your liking. 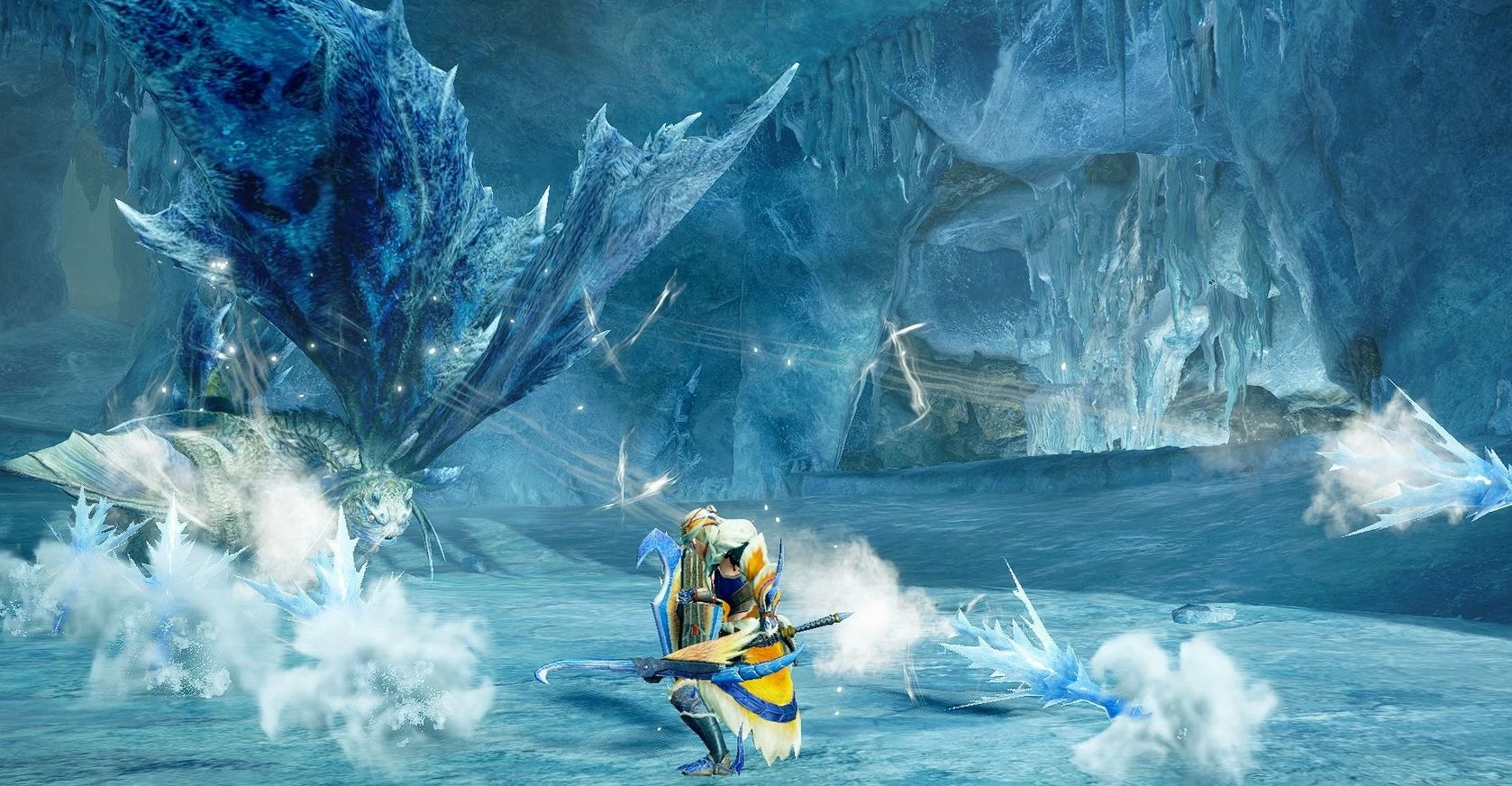 Aurora Somnacanth is more mobile than the nominate species, but its attacks are actually easy to dodge. Most of its moves can be evaded just by dodging to either side. It still has the potential to catch you off guard, so watch it carefully. It is most mobile with all four legs on the ground.

Somnacanth will follow many of its stronger attacks with an opening where it pauses to growl a little. Take advantage of these openings to hit it in the head and neck.

One of its more dangerous attacks is an ice beam. The beam sweeps from one side to the other, and it moves fast. Dodging through beams like this is a risky game, so it is best to sheathe and Wiredash upwards and over the beam. Of course, if you are already by Somnacanth's side, you don't have to dodge it.

When Aurora Somnacanth stands up on its tail and starts to sing, it's about to use its biggest attack. It sets off rows of icy explosions on the ground in front of it. These explosions do huge damage and inflict Iceblight. A Flash Bomb will interrupt this attack if you set it off when Somnacanth stands up. The monster still has pretty big blind spots by its sides, so a quick Wiredash can get you out of range of the explosions. 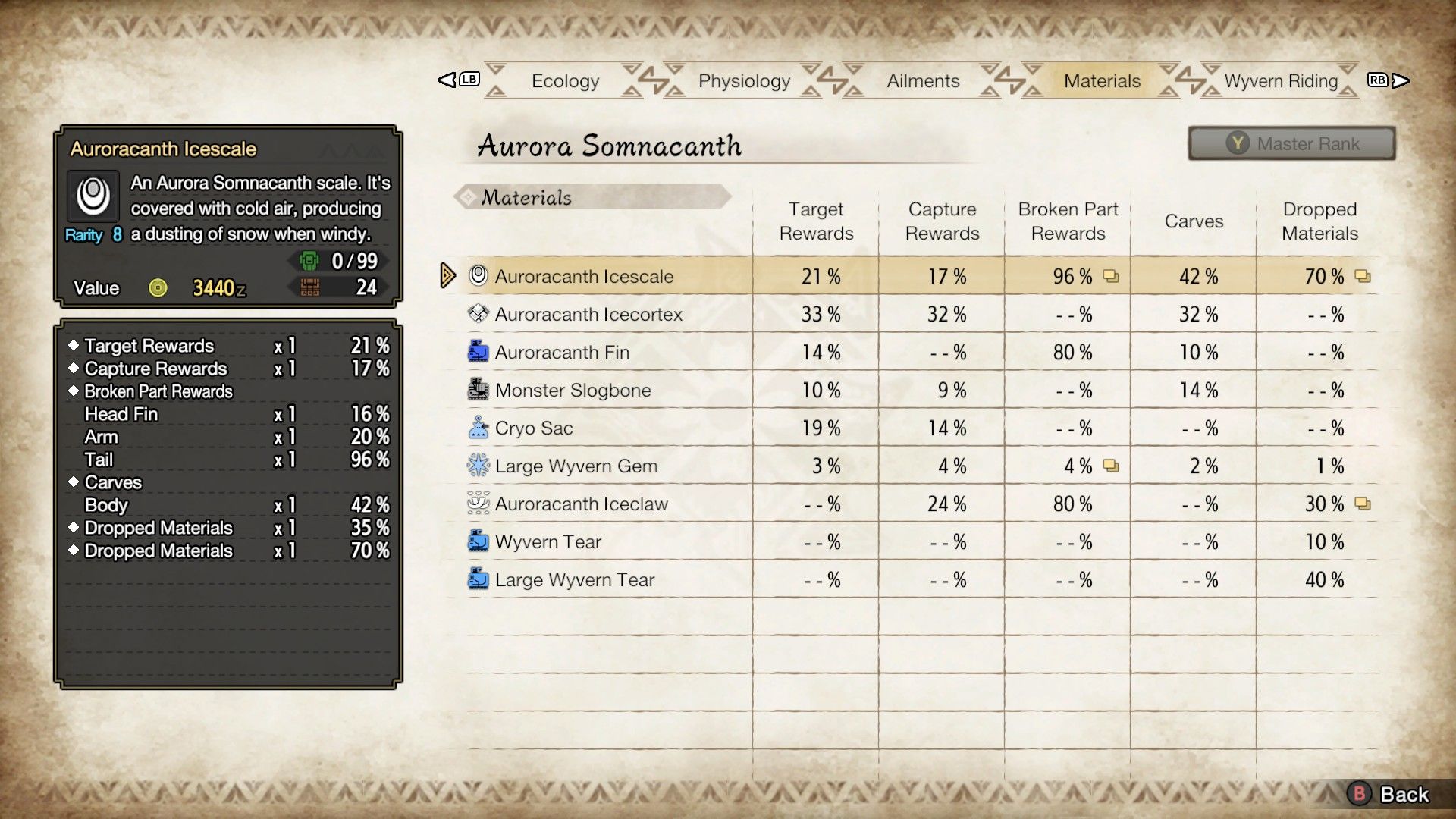