The sequel to Commander Legends is finally upon us, and with it come a slew of excellent new cards. From niche flavor wins to new auto-includes in every color, Battle For Baldur's Gate has added some amazing new spells for each of your EDH decks.

As with the previous Commander Legends set, there's a huge focus on creatures in Battle For Baldur's Gate, with both legendary and non-legendary creatures making up the bulk of the set's preview season. Here are the 10 best of these new creatures, ranked from strong to strongest. 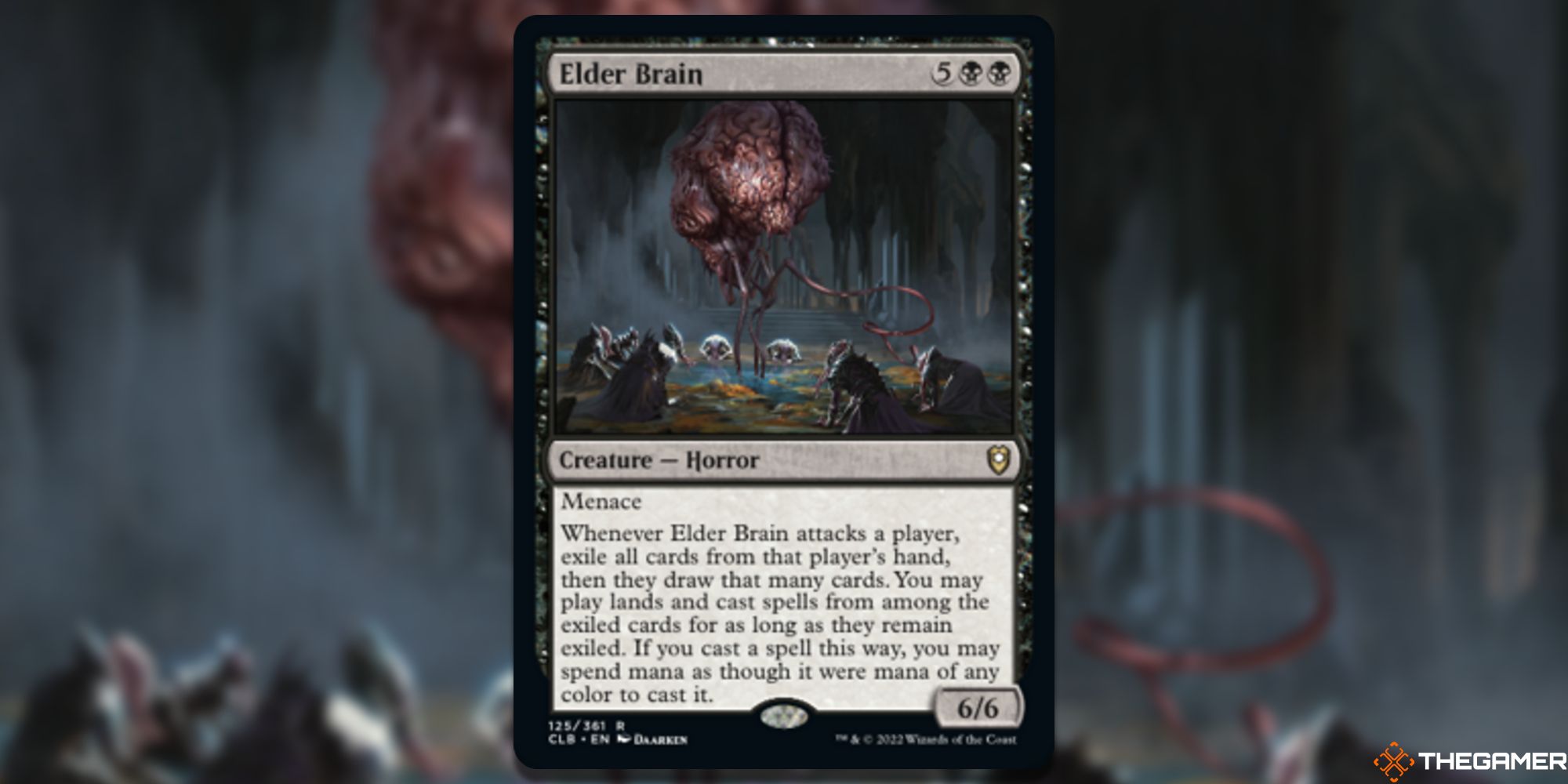 The response to Elder Brain has been more lukewarm than the other entries on this list, and that's fair. Elder Brain is an admittedly niche card, and it has a pretty high casting cost. Despite this, its effect is too powerful and too fun to ignore.

Exiling your opponent's entire hand and getting to play the cards that have been exiled for the rest of the game is an awesome effect. Imagine playing that effect against a Blue player with 20 cards in their hand. Beautiful. 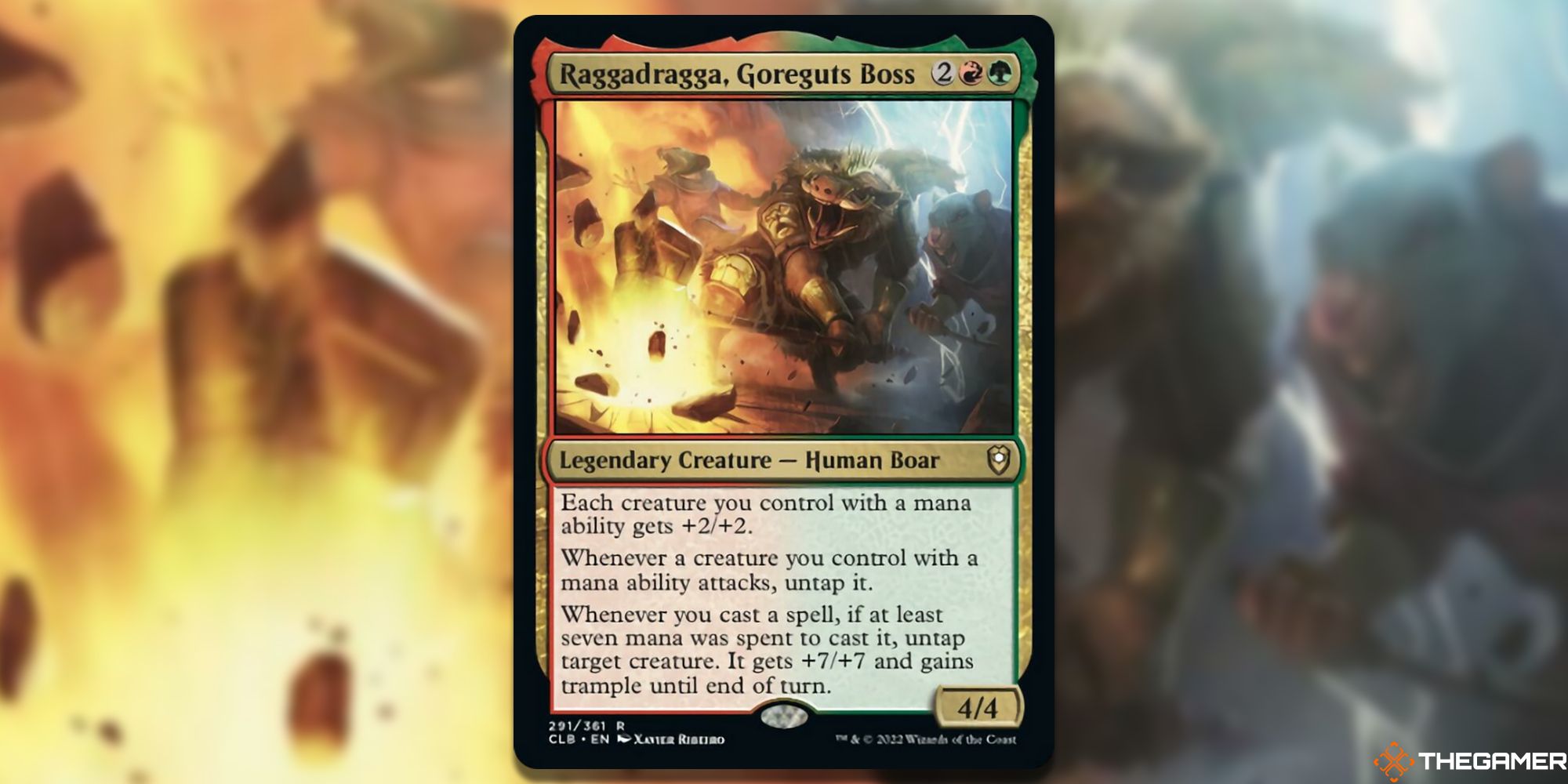 Raggadragga is a quintessential Gruul commander that looks to make other creatures stronger and support your mana base at the same time. By focusing on buffing your mana dorks, Raggadragga also carves a unique spot for itself in the play space, differentiating it from a generic Gruul big creature commander.

Raggadragga's second ability also makes it great for adding more strength to your board in the late-game as you start casting your big 7+ mana creatures. An extra +7/+7 on the board is massive, especially when it's triggered by an incoming Craterhoof Behemoth. 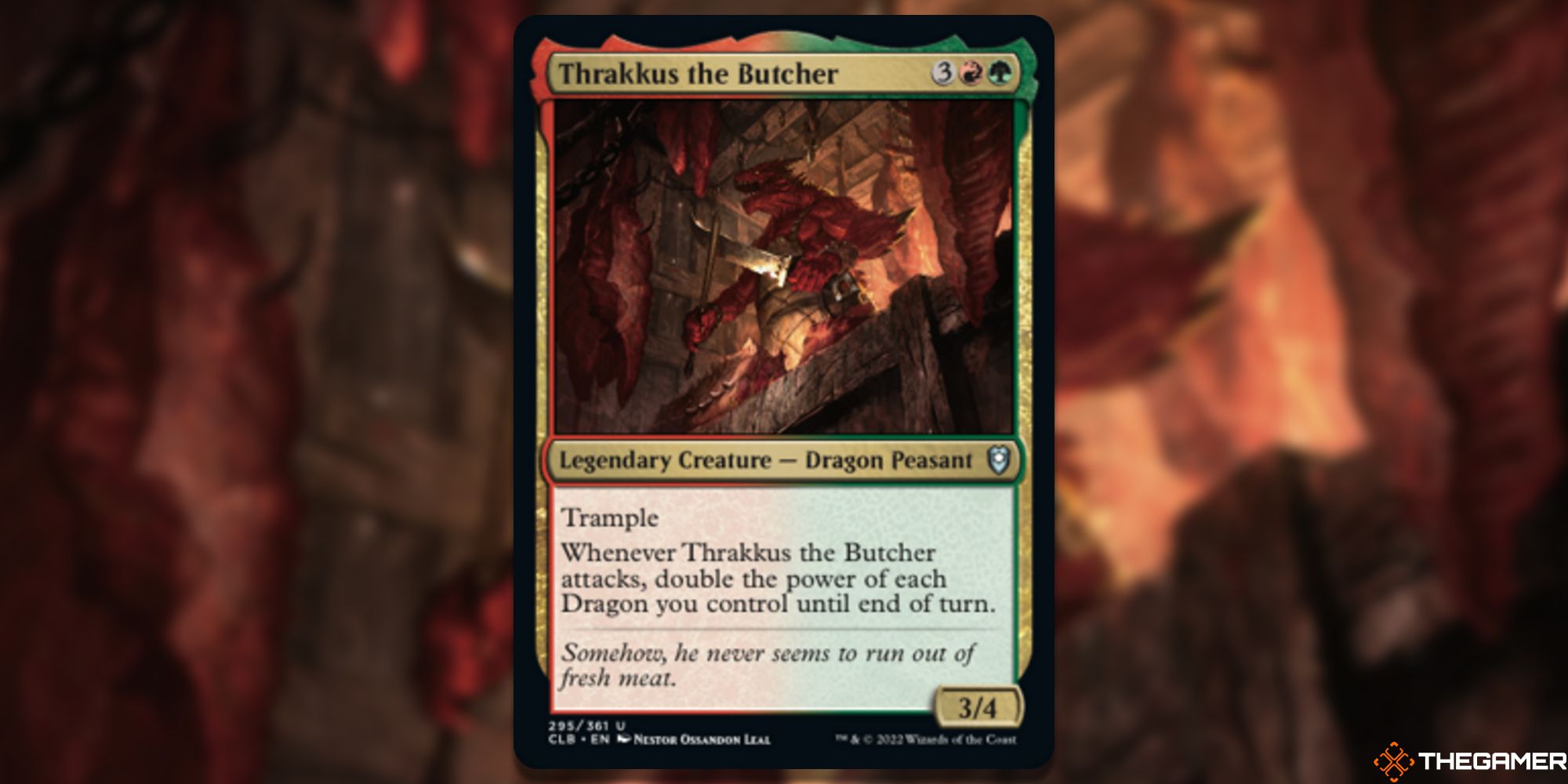 Thrakkus The Butcher is another legendary Gruul creature. Unlike Raggadragga, though, Thrakkus works best as part of the 99 of Dragon tribal decks like The Ur-Dragon or Tiamat.

As you might expect from a tribal-focused Gruul creature, Thrakkus' ability is a simple stompy creature effect that makes your Dragon army scarier by doubling each Dragon's power. The simplicity of this effect makes Thrakkus a really easy include for Dragon tribal decks that are looking to win with massive damage — which are basically all of them. 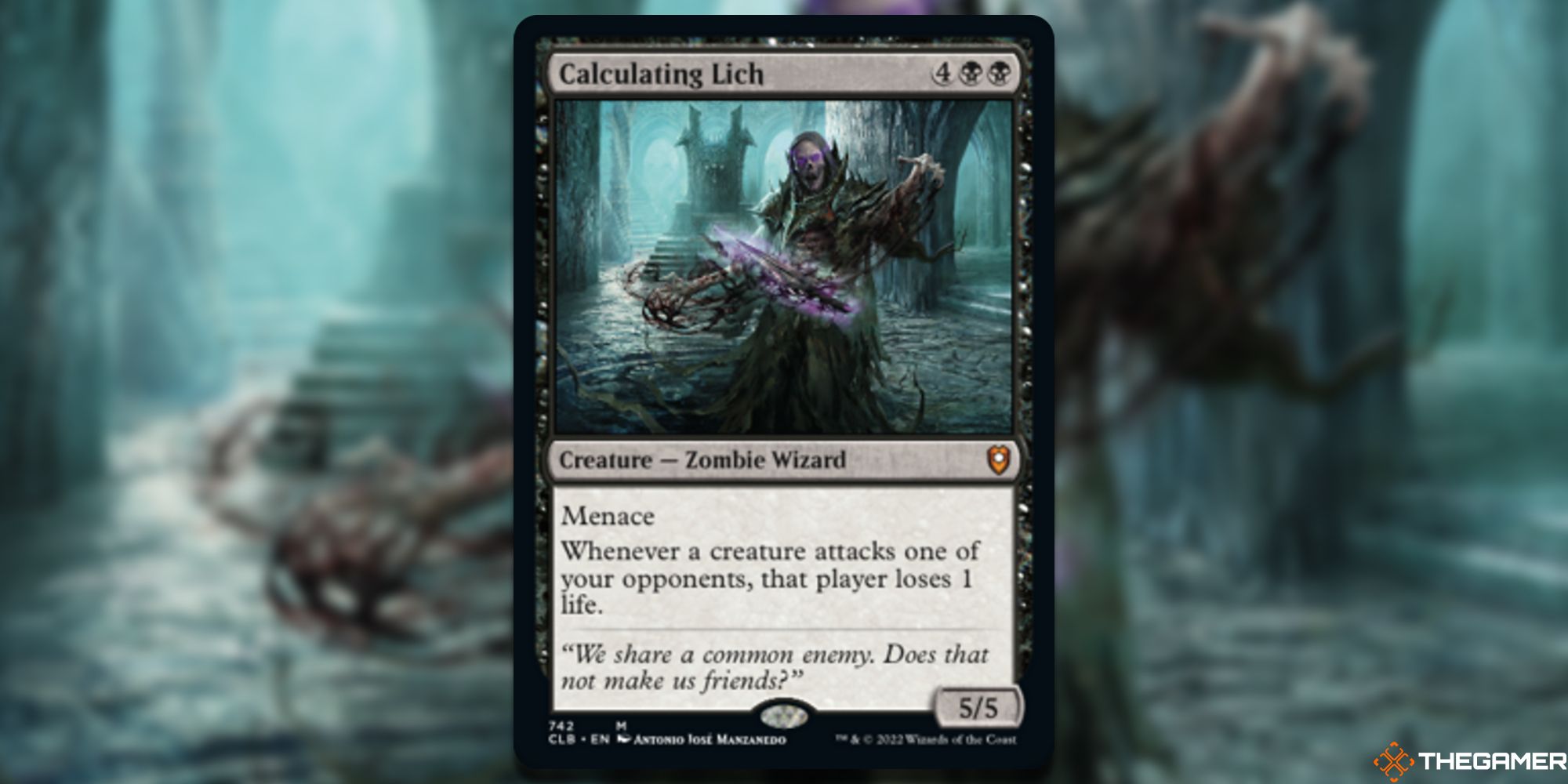 Calculating Lich is probably the most exciting card in the set for players of Black decks. It easily has the potential to be a game-winning spell in token decks and decks using the ever-popular aristocrats archetype.

Calculating Lich does especially well in aristocrats decks, as its ability triggers when a creature attacks, not when it deals damage. This means you can throw your sacrifice fodder at an enemy, trigger Calculating Lich, then sacrifice the creatures to get your Blood Artist and Cruel Celebrant triggers, too.

6 Balor – New Demon On The Block 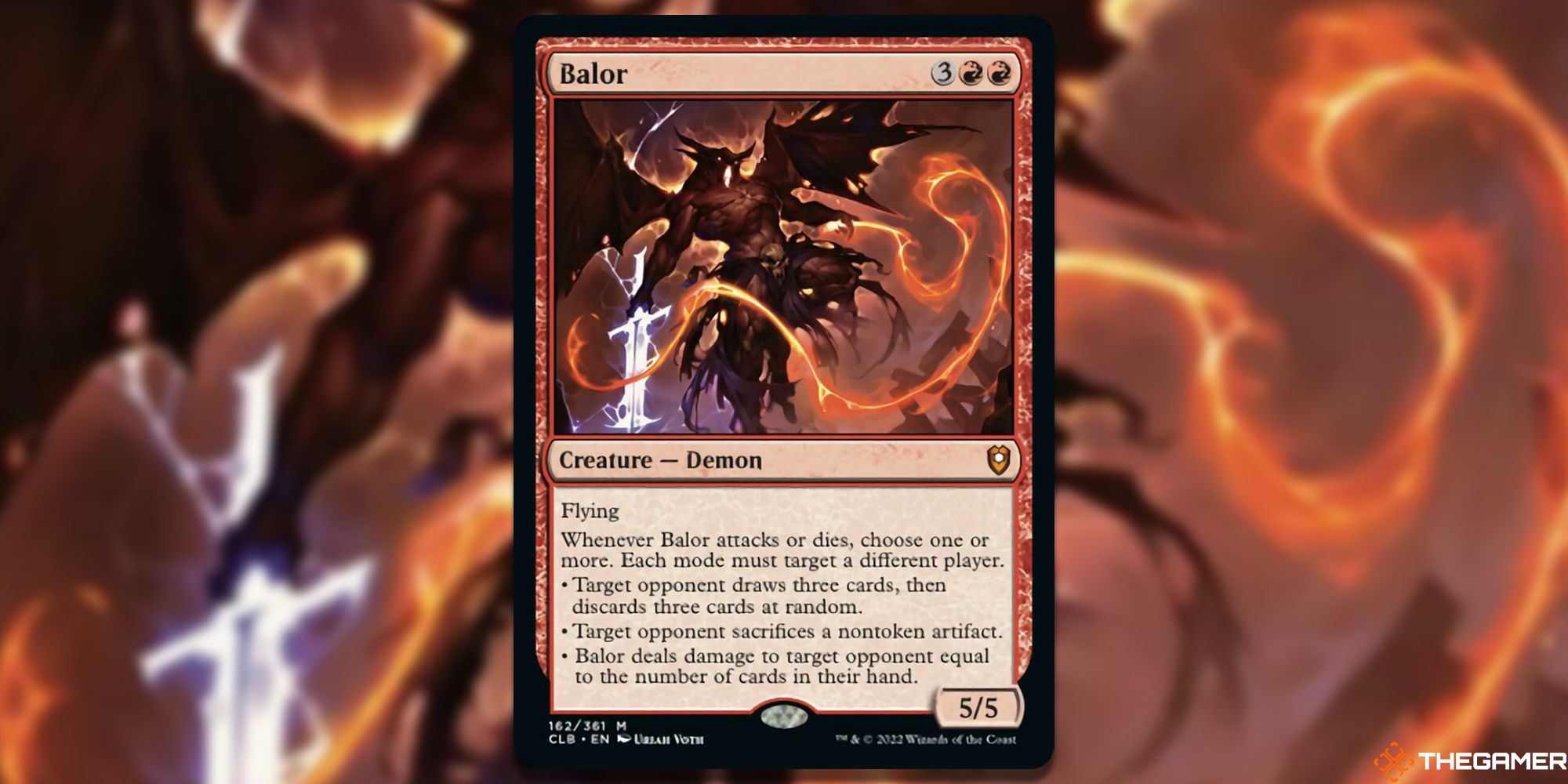 Balor is a card that you'll be seeing a lot of if you face Rakdos decks. It's a perfect addition to Demon tribal decks such as Rakdos, The Showstopper, and its versatility means that you can use it to apply pressure to opponents at just about any time.

As well as Demon tribal, Balor is also going to find its way into basically any Burn deck, and many other Red decks that want to smash face and punish the opponent for getting hit. Whether it be by disrupting the opponent's hand, destroying their artifacts, or dealing damage, Balor is going to be an absolute nightmare to play against. 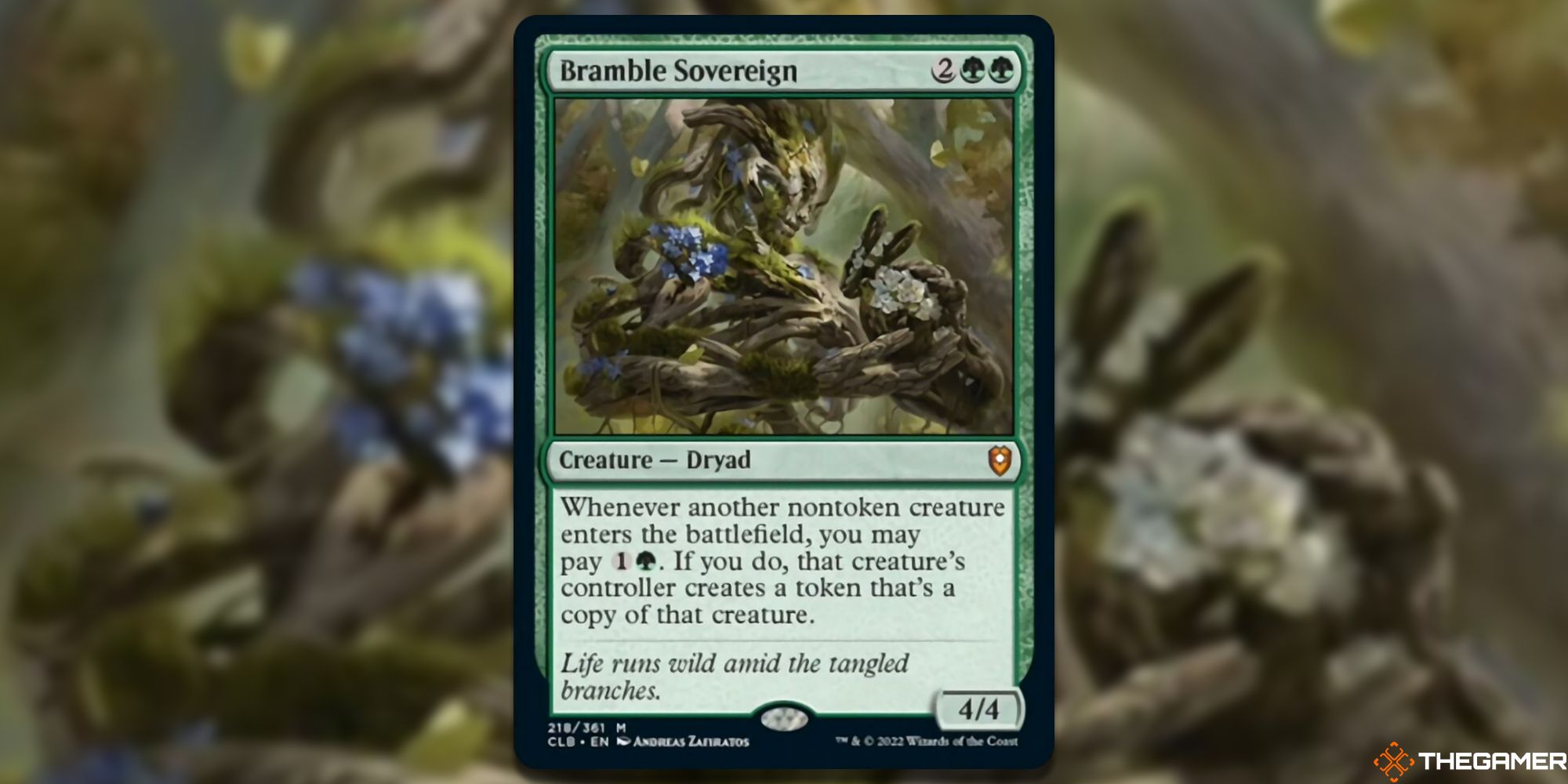 Unfortunately, it doesn't copy legendary creatures as the token would be legendary, triggering the legendary rule and causing you to sacrifice the token. Despite this downside, Bramble Sovereign will still find its way easily into many Green Decks. After all, who doesn't want to copy their Craterhoof Behemoth? 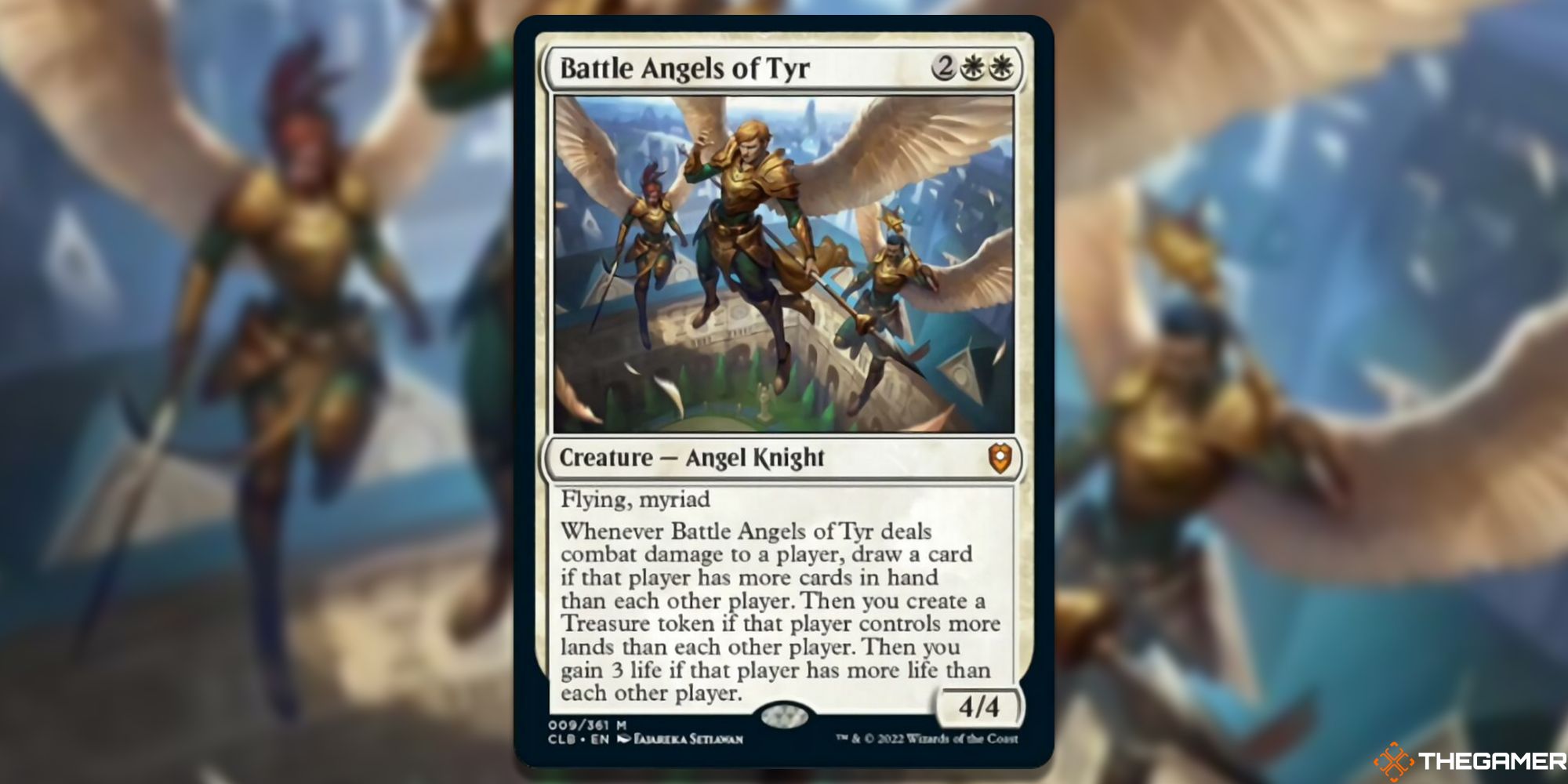 Myriad is the shining star of the returning mechanics in Battle For Baldur's Gate. Tripling your damage and ability triggers every time you attack is nothing to scoff at, and Battle Angels of Tyr is the perfect example as to why that is.

By copying itself mid-attack, you almost guarantee that you'll trigger a couple of Battle Angels of Tyr's abilities, potentially giving you card draw and mana ramp in a color that desperately needs it.

As well as having a great Myriad effect, Battle Angels of Tyr is also very aggressively costed, only requiring 4 mana to cast in exchange for 3 4/4 flyers, some draw, and some ramp. It is sure to find a home in almost every Angel tribal deck from here on out. 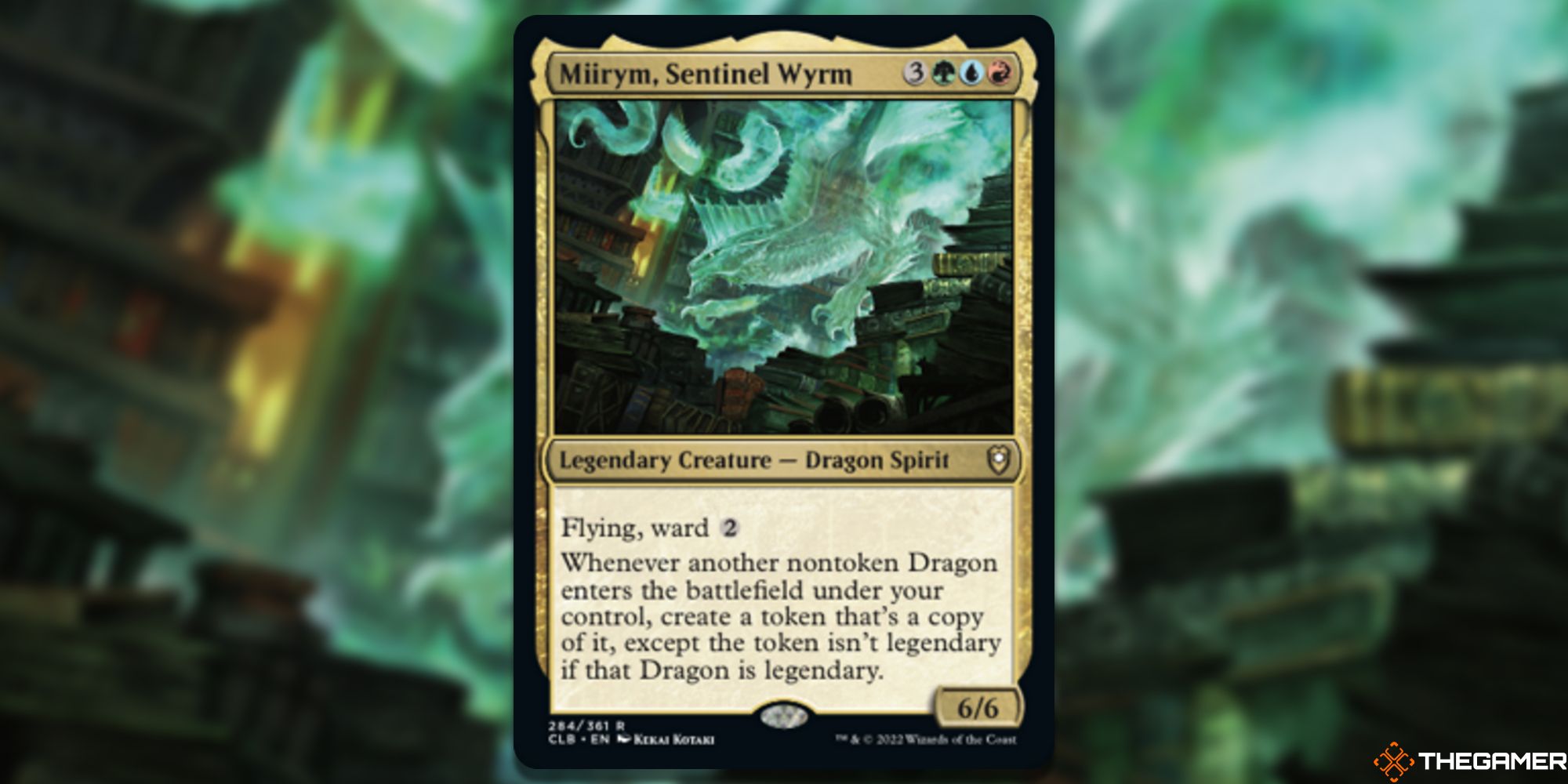 Miirym, Sentinel Wyrm is the most talked about Dragon in a set full of excellent Dragons, and a quick read of its abilities makes it clear why that is. Copying every single Dragon, including the legendary ones, that enter the battlefield is an ultra-powerful effect.

Miirym is in the habit of creating winning board states, boosting staple Dragons like Scourge of Valkas and Terror of The Peaks to near-broken power levels. Expect to see Miirym in the command zone a lot from now on, and in the 99 of every Ur-Dragon and Tiamat deck, too.

2 Archivist Of Oghma – A New Staple 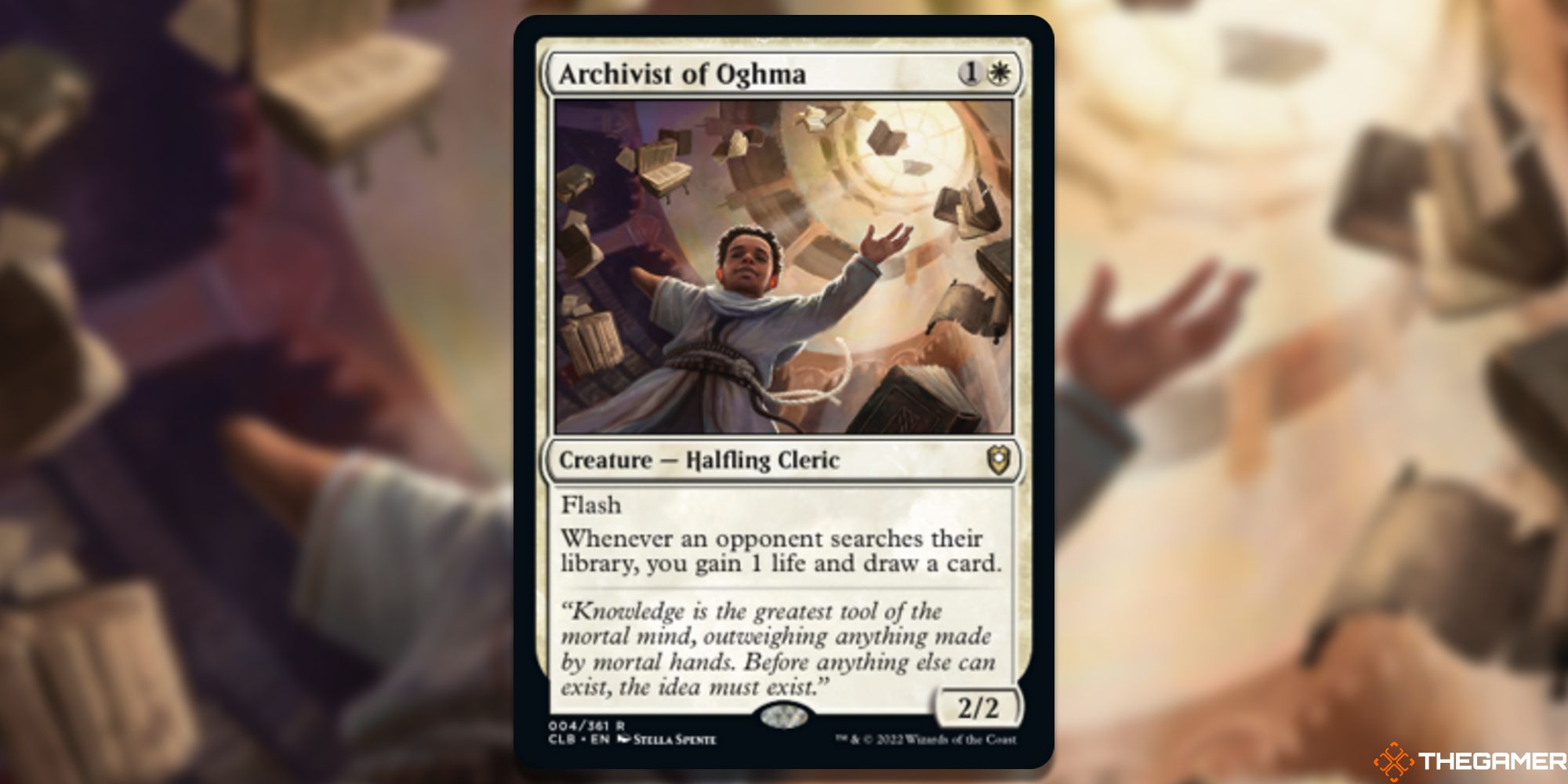 Archivist of Oghma is many people's pick for the best creature in Battle For Baldur's Gate, and it's easy to see why. It's the latest installment in mono-White's redemption arc, giving it some much-needed card draw.

Drawing a card every time that an opponent searches their library is an incredibly powerful draw effect for a non-Blue color, especially when facing strong decks full of tutors, fetch lands, and search-effect ramp. This coincidentally also makes it a great pick for tutor-heavy formats like Vintage.

Archivist's power could make it a target for an early removal, but even that is sidestepped by Flash, which guarantees at least one trigger of its ability before the table puts a stop to your card draw shenanigans.

Archivist of Oghma is certain to be a new staple in mono-White, joining iconic cards like Smothering Tithe and Swords To Plowshares. 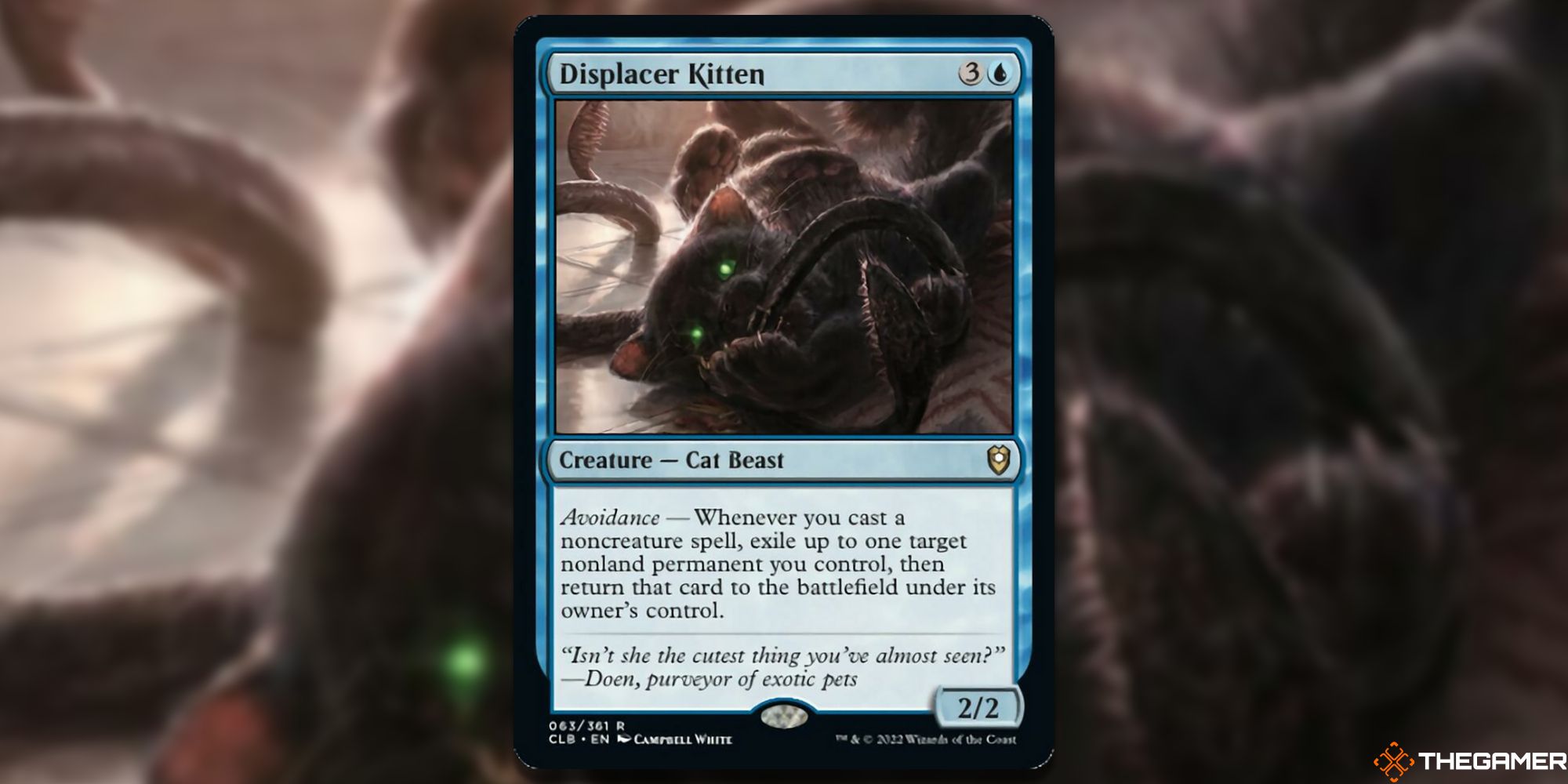 Displacer Kitten is the newest blink card on the block, bringing an easily triggered ability that blinks any non-land permanent. It's certainly the most powerful creature in Battle For Baldur's Gate, and is so strong that it may even see play in Legacy.

There's basically no downside to this card as a blink outlet – cards are blinked instantly, there's no cost to pay, and almost any card on your board is eligible to be targeted.

Since it triggers when you cast any non-creature spell, you can easily load your deck with cantrips and other low-cost spells to continually trigger it. You could even blink a tutor creature like Spellseeker to keep supplying the Kitten with more cheap spells. The possibilities are endless.

Displacer Kitten is certainly the best creature in Battle For Baldur's Gate, and should not be slept on.