MultiVersus is a fully-loaded platform fighter that comes packed with an excellent roster of characters. Each character has their own little quirks. Some of these quirks work better with certain characters than others. Creating a team with real synergy is a ton of fun in MultiVersus. That can be as easy as pairing a character who provides defensive buffs with a character who is a little more on the fragile side. But while that is a pretty good idea for a team, it doesn't quite tickle our fancy. It is missing a certain je ne sais quoi.

We have been crafting teams over the last couple of weeks, and these are some that we had the most fun with. Some of them are pretty simple (yet satisfying) two-punch setups, while others create utter chaos on the playfield. The one unifying factor is that they are all fun!

5 The Ol' Launch And Scoop – Finn And Superman 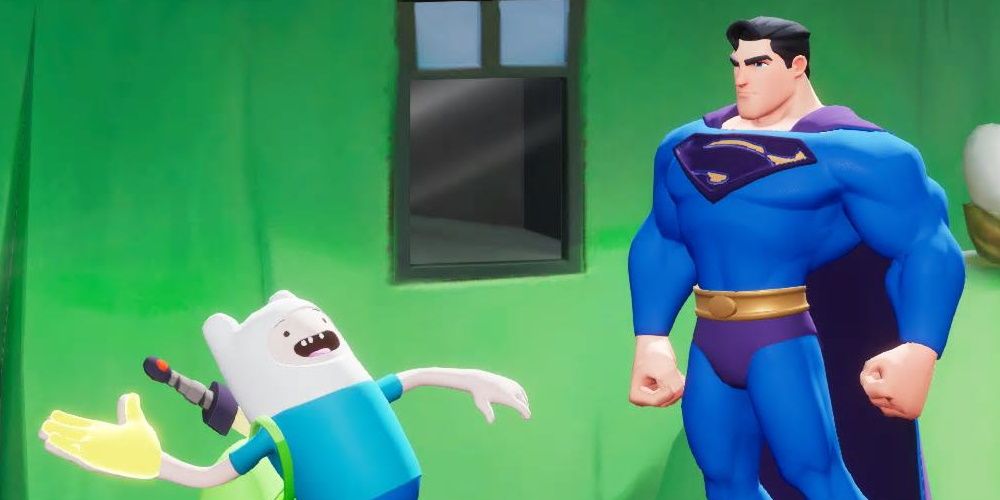 One of the things Finn is great at is picking characters up off the ground. One of the things superman is great at is tossing opponents off the top of the screen. You see where we are going with this, right? Of course, these two can help each other in a number of ways. Superman's eye lasers are pretty great at popping opponents up as well, so he could return the favor for Finn (who isn't bad at taking opponents out at the top of the screen either). But the core of the plan here is to get your opponents midair so that Supes can toss them out.

Of course, any character can pop other enemies into the sky, but Finn being able to charge an upward thrusting attack (while moving), which leads directly into his neutral ariel kick, which is a move that can keep his enemies in the air for an extended period of time, makes him very good at getting opponents elevated. At which point, our man of steel can scoop them up and toss 'em out.

If you have an aversion to Kryptonians, you could swap out Superman for Harley Quinn. She isn't able to toss them out at the top of the screen, but she is very, very lethal in the air.

4 The Phalanx – Steven Universe And Tom And Jerry 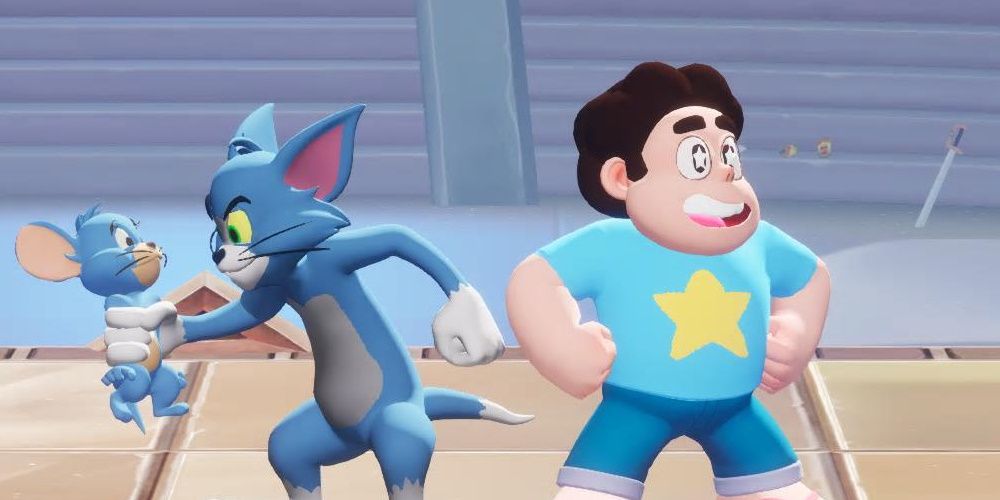 One of the best parts about Steven Universe is just how excellent he is at controlling space. His ability to place barriers everywhere means that he can stop the advance of his opponents. Tom And Jerry, on the other hand, is a menace who actively uses a range of potent projectiles. And how do you beat Tom And Jerry? Well, you get up close and personal. You can probably see why these two make a great pair.

Steven Universe builds walls, and distracts your opponents with his clone, while trying to control space above the barricades. Meanwhile, Tom And Jerry bring pain and suffering to your opponent from afar. The important piece of this puzzle is Steven Universe, of course. So, you could do this with any of the mage-class characters. We specifically chose Tom And Jerry because their Dynamite stick attack, when paired with their Dynamite Split Signature Perk, does a great job of helping to lock down the stage as well. This just guarantees that the opposing team will have a rough go of it. 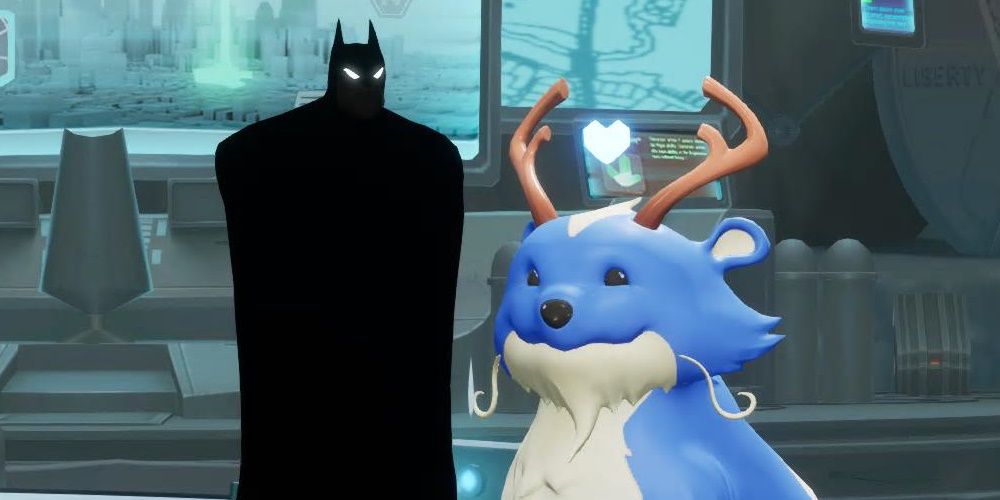 Okay, so what makes Reindog so great? It is his tether, which allows him to yank his allies to him. What is one of Batman's best tools? Why, it is his grappling hook, of course. The tool that allows him to zip around the arena. So, then what happens when you have the two of them together? Absurd mobility, that's what! Batman will be swinging around all over the place. It is a spectacle to say the least. Of course, at a high enough percentage, there is really no stopping a ring out. But this team absolutely has an excellent amount of survivability, as anything that isn't a guaranteed kill will almost certainly be survived.

Beyond their unique shared tethering abilities, Reindog is also a great character for buffing projectiles, and Batman has an assortment of those at his disposal. Batman's ability to fight from a multitude of distances means that he is a great fit for this team, and Reindog will be able to help him at any distance.

You can also build a team that has a similar core idea with Arya or Garnet instead of Batman, but their grappling abilities are on cooldowns, so you don't get that same level of elasticity. 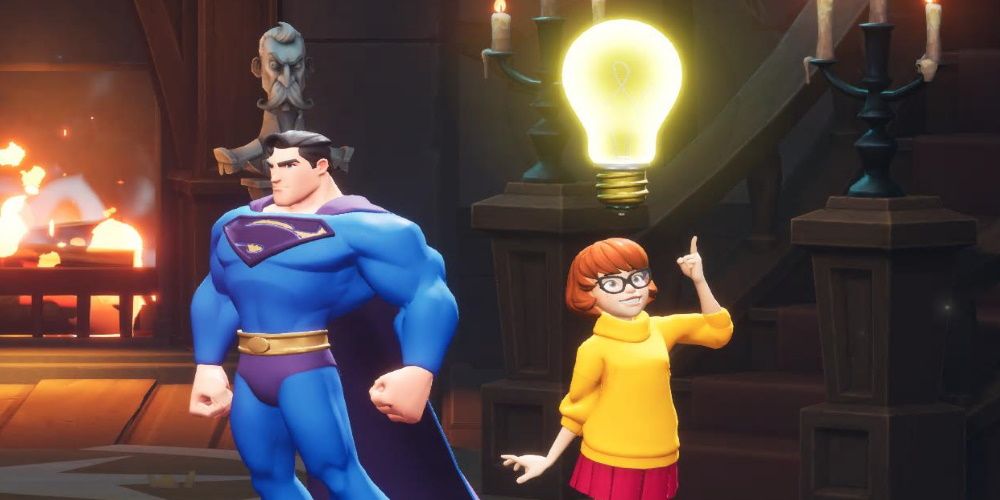 With elemental interactions playing such a key role in MultiVersus, it only makes sense that you can build around them in some pretty fun ways. A great example of this setup would be a Superman and Velma pairing. Unfortunately, Superman using his freezing breath on an opponent who is standing in the puddle of Velma's goo won't freeze them faster; however, by pairing these two specials together you can create an extended wall of ice. Moreover, Superman can chase down a character who has escaped the puddle and in short order finish what Velma started.

Another great aspect of this pairing is how Superman's breath interacts with his partner: if they pass through his ice breath, they will be granted Ice Gauntlets, which means that their next attack will inflict the freeze debuff. Now, to top it all off, add in the Ice To Beat You perk for extra damage, Coffeezillla to help Velma's specials cooldown quicker, and Kick 'em While They're Down to deal additional damage to enemies with a debuff, and you have a very scary team.

We didn't want to just repeat the same general sentiments, but you can craft a very similar team while focusing on either fire or lightning. For a fire team, you would probably want to use Iron Giant and Superman, for a lightning team, you are probably looking for Garnet and Reindog. The perk loadout would be very similar, but you would obviously swap out Ice To Beat You with That's Flammable, Doc for fire, or Static Electricity for lightning. 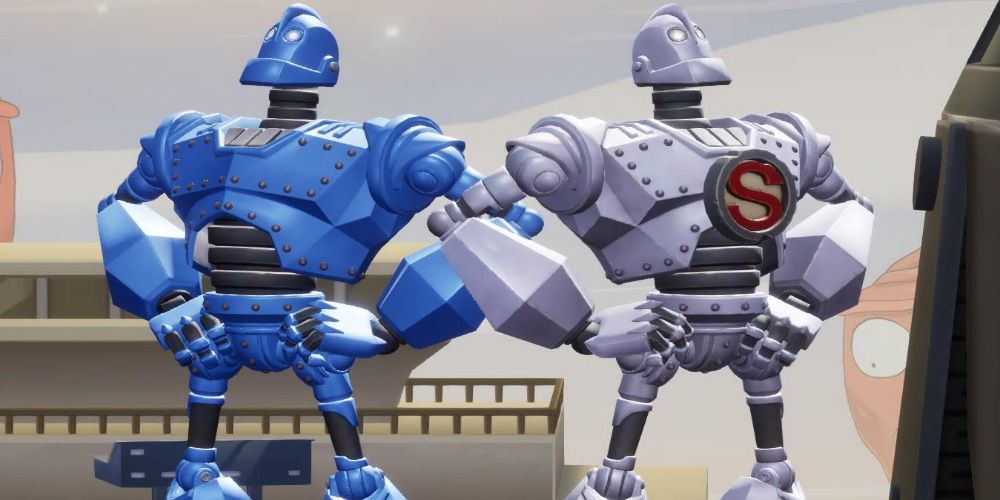 So, if there is one problem the Iron Giant has, it is its massive, huge, giant hitbox. This charismatic robot is the size of two standard characters. While nearly every character in the game can pair with another character to cover their weaknesses, the poor Iron Giant doesn't have a partner that will shrink their hitbox. So, what is the Iron Giant to do? Well, one thing they can do is embrace chaos. Two Iron Giants are better than one!

We aren't necessarily convinced that a team of two Iron Giants is going to end up dominating the meta, but DAMN can this team be horrifying! Naturally, this is a character who has a ton of armor and incredible range. So, when you have two of them stacked on top of you, they just annihilate your health bar. How are you supposed to escape their endless pressure? You can't dodge away; your dodge doesn't reach far enough. So, you can find yourself in a situation where you have two of these metal monstrosities just ricocheting you between each other.

Obviously, this team can also have things backfire for them just as badly. Their giant hitboxes mean that they are sitting ducks for projectiles-based characters, and a solid hit-and-run team could do some real damage. Not to mention that their armor isn't infinite. Nonetheless, this is, at the very least, a funny team to pull out and can make for extremely chaotic, and hilarious, matches.