False Advertising serves as the fourth episode of New Tales From The Borderlands. In it, the main crew's business aspirations take a significant hit when they immediately waste all their investment money. So, they call their Angel Investor asking for help. From there, plenty of strange things start to happen. It's an effective penultimate episode, as it sets things up perfectly for an exciting final act.

From a gameplay standpoint, there is plenty to do, as there are a few puzzles in this one to complete. On top of that, there are quick time events (QTEs) to pass and decisions to make. This guide shows you how to get through it all. 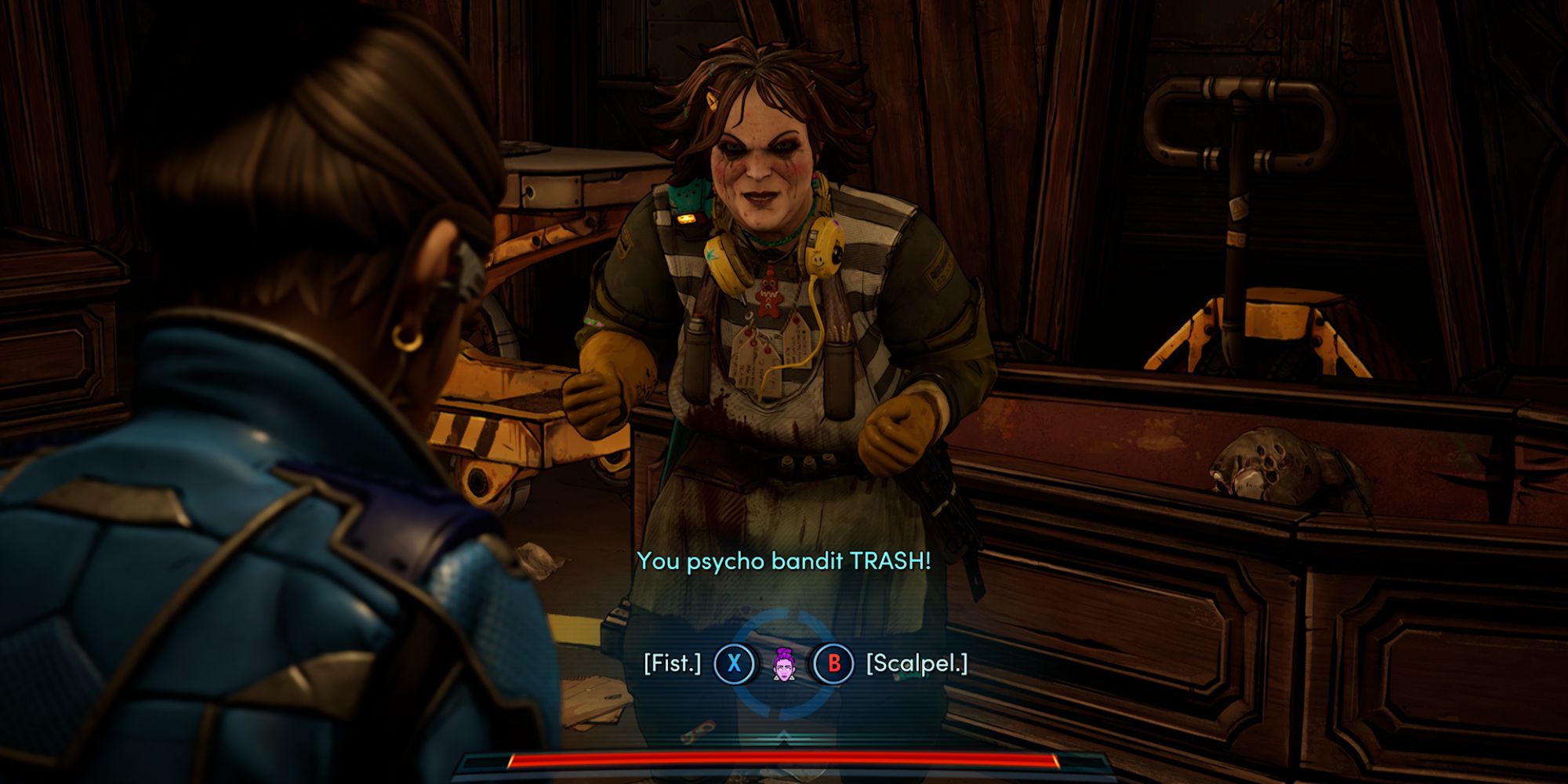 Anu starts the episode the same way she finished the last one, as she's still stuck in a coffin, trying to break out. To do so, you need to hit the buttons on the screen.

Following that, she has a run-in with the woman who put her in there. This leads to a QTE fight against the lady. In the end, you have to choose between using your fist or a scalpel to take her down.

If you select fist, Anu punches the woman in the face and leaves. The alternate choice is to kill her with a scalpel and leave. Either way, Anu doesn't get a corpse for her testing. 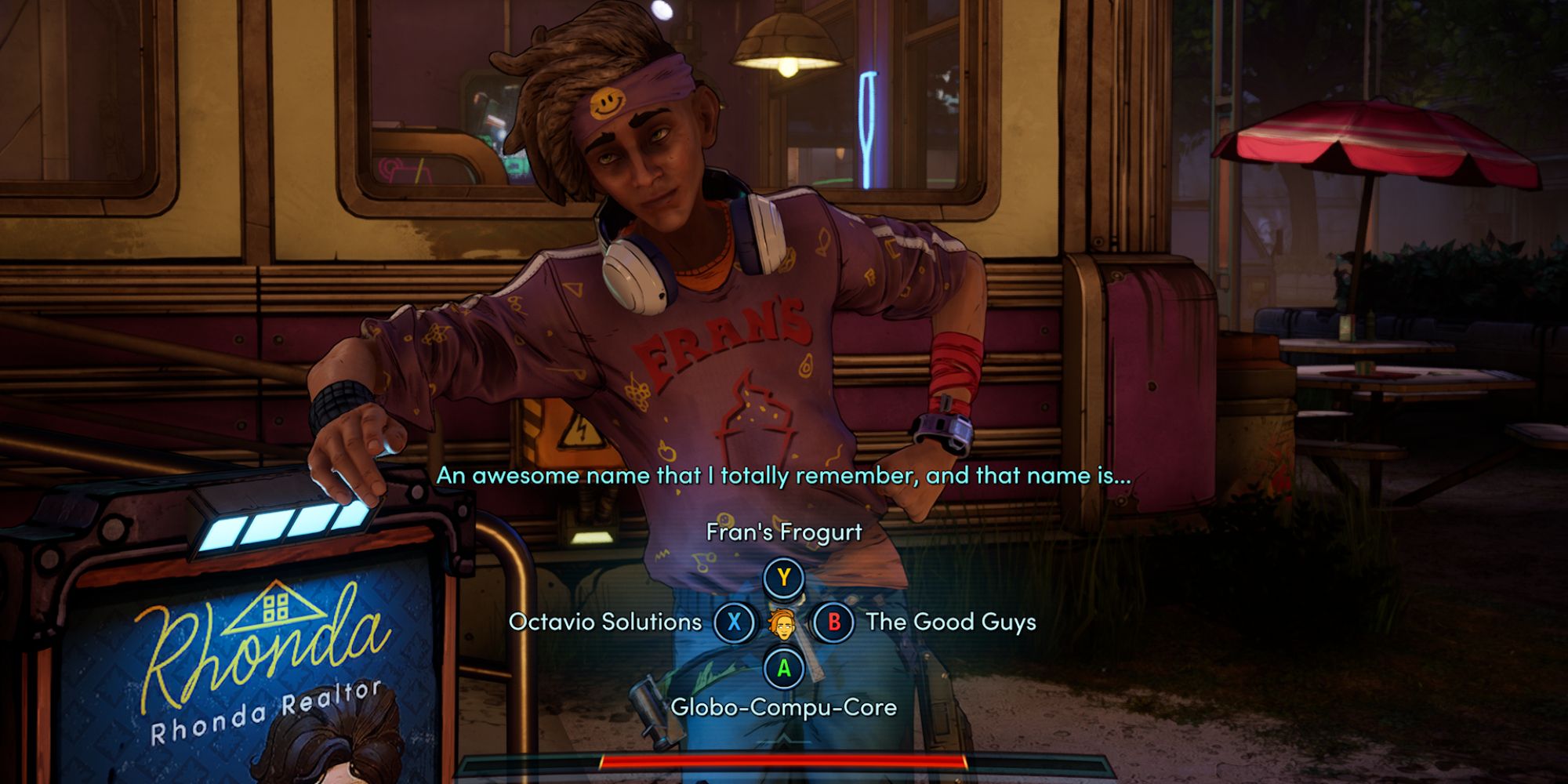 After the musical montage, Anu and Octavio find themselves at the new HQ. However, it isn't that new at all, as Octavio accidentally bought Fran's Frogurt again.

But you do get the chance to give it a new name between Octavio Solutions, Globo-Compu-Core, and The Good Guys, or keep the name Fran's Frogurt. Whatever you choose will appear on the sign above the building. A few minutes later, you get to decide what security measures to get for the place. You must pick either Super Sciency Innovation or State-Of-The-Art Security System. Neither is impressive, as the former is a plasma ball while the latter is a foam turret. 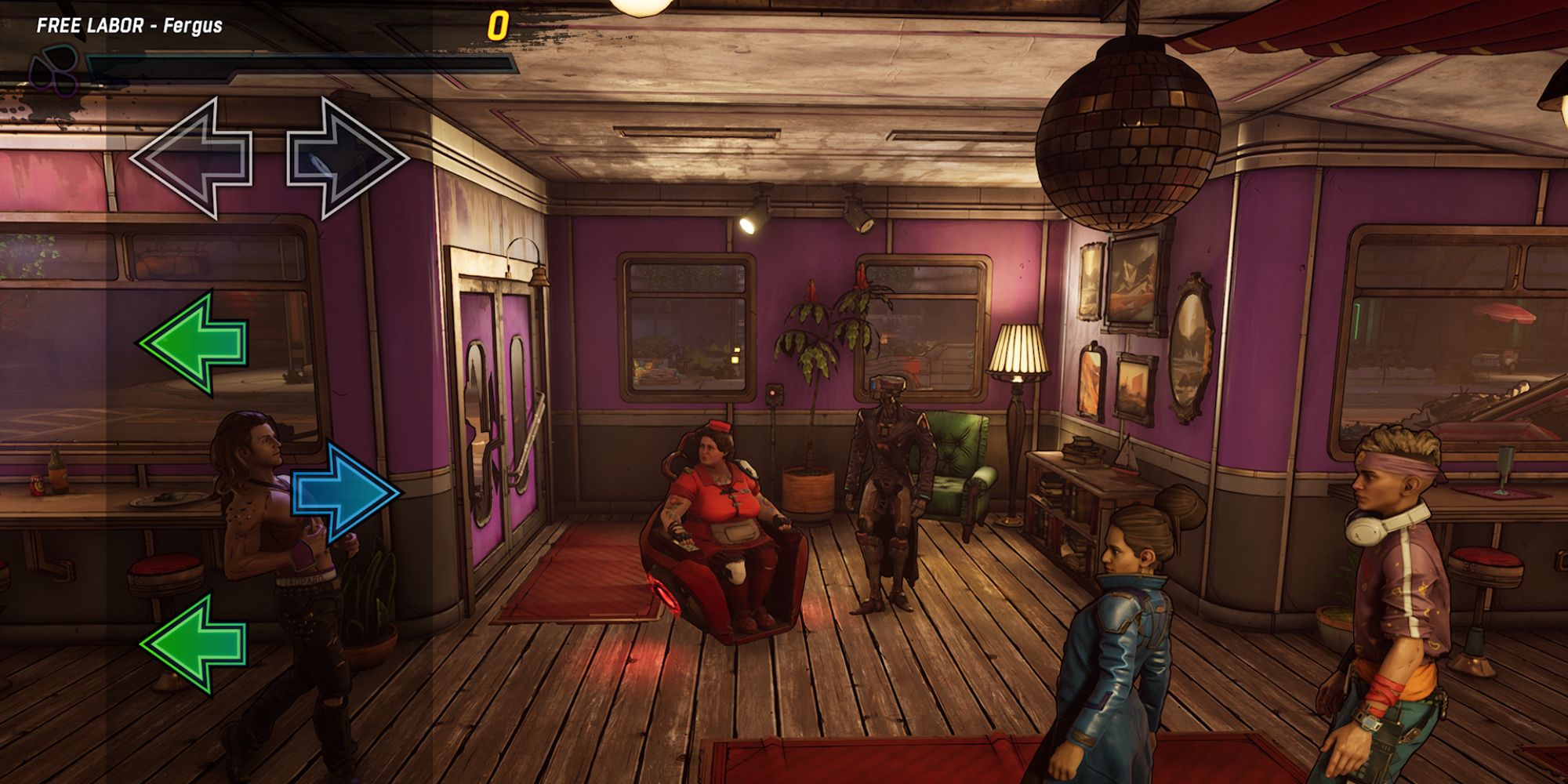 Soon after, Fran enters and introduces the new intern, Fergus. This triggers a rhythm game where you have to hit the directions at the right time to give the new hire an impressive entrance. 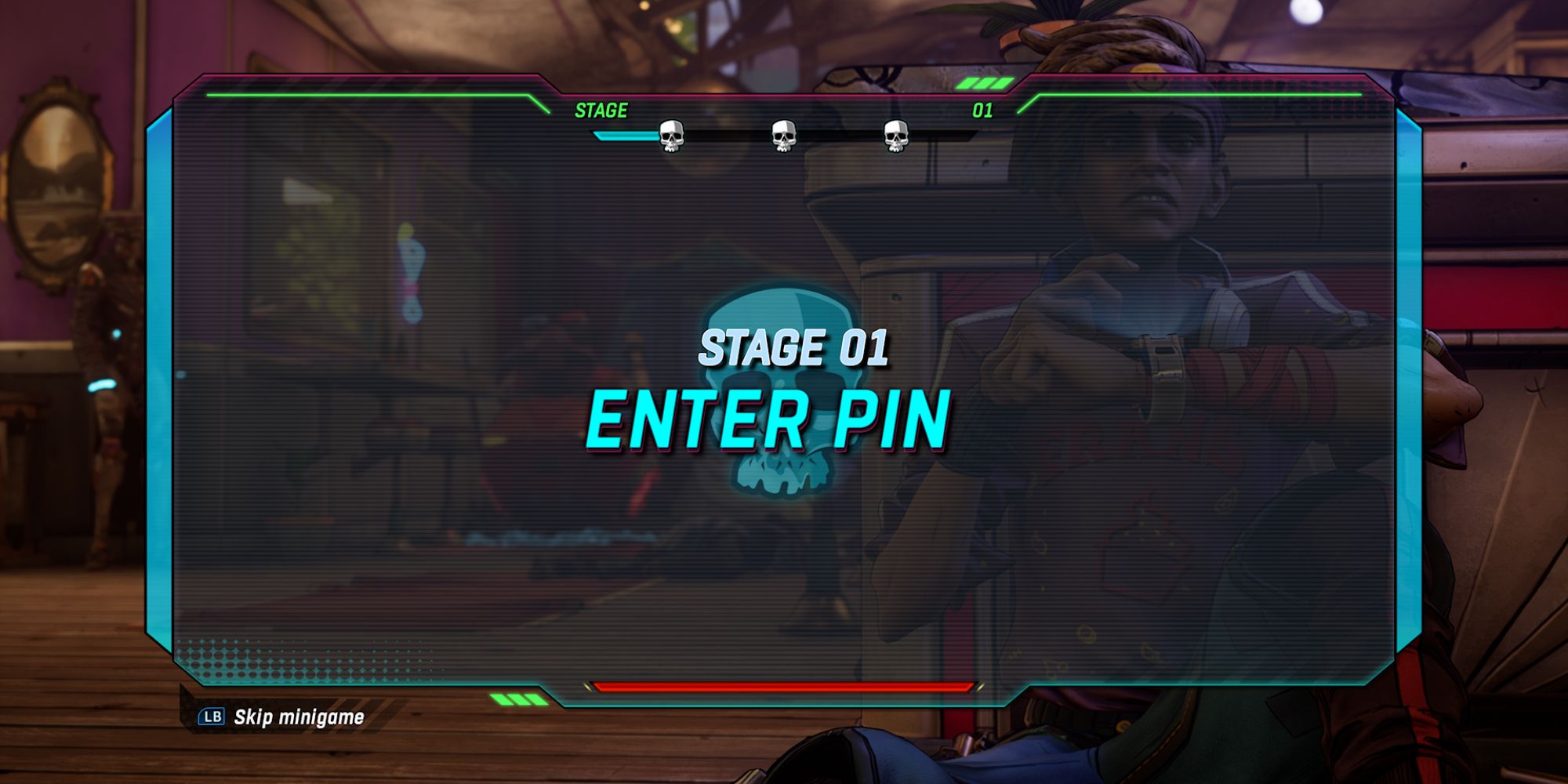 A bit more discussion happens before the talking gun Brock and a few Tediore troops arrive.

They quickly kill Anu. And as Fran, you must fight them off in a QTE. Then you switch to Octavio and have to complete a hacking minigame – the three-stage one seen in previous episodes. This turns your plasma ball or foam turret into a lethal weapon. 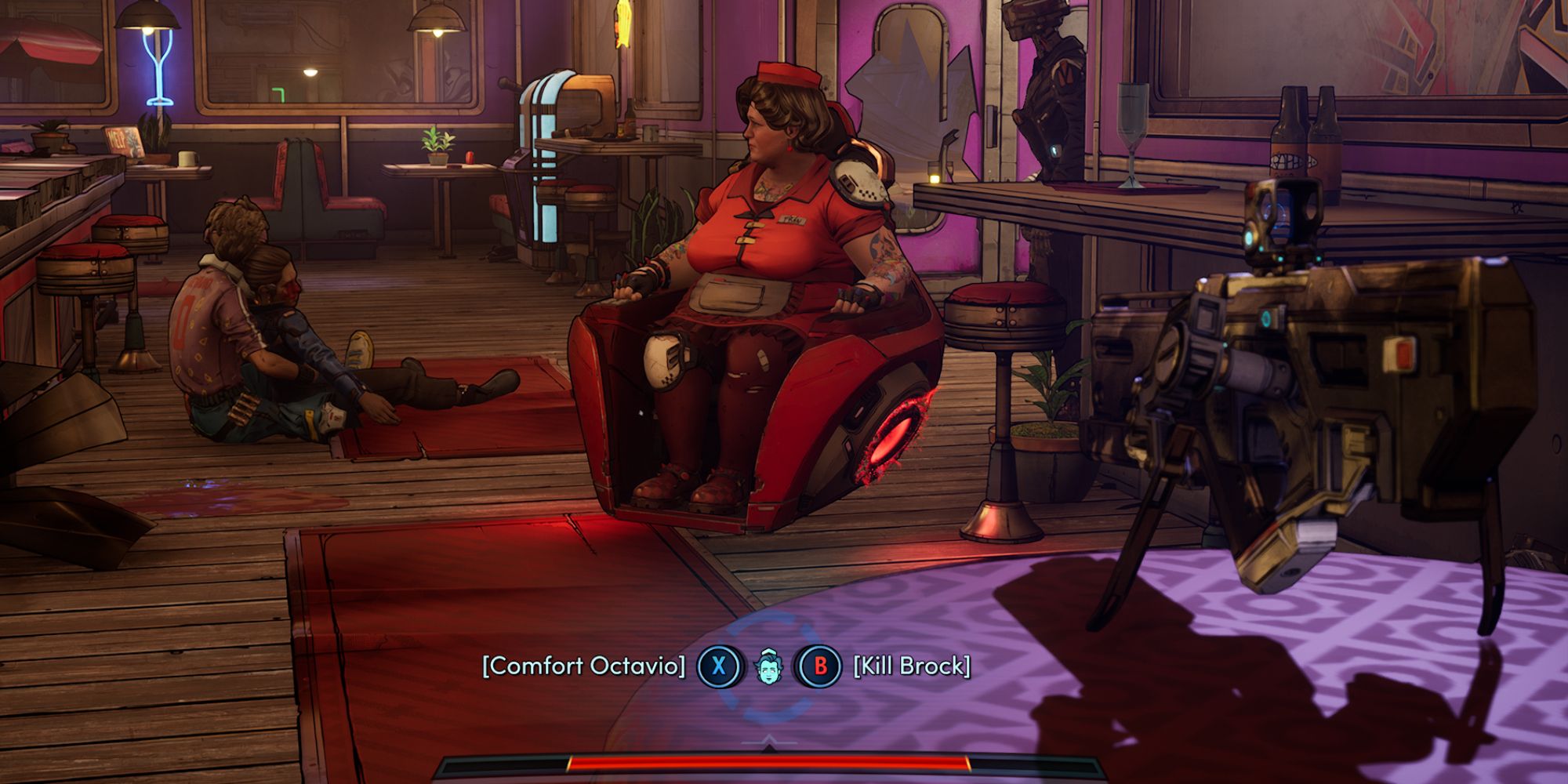 Once all the guards are down, all that is left is Brock. As Fran, you must decide whether to Comfort Octavio or Kill Brock. The relationship between Fran and the others improves if she opts to comfort her friend, but Brock gets away. Brock doesn't stay dead forever, anyway. 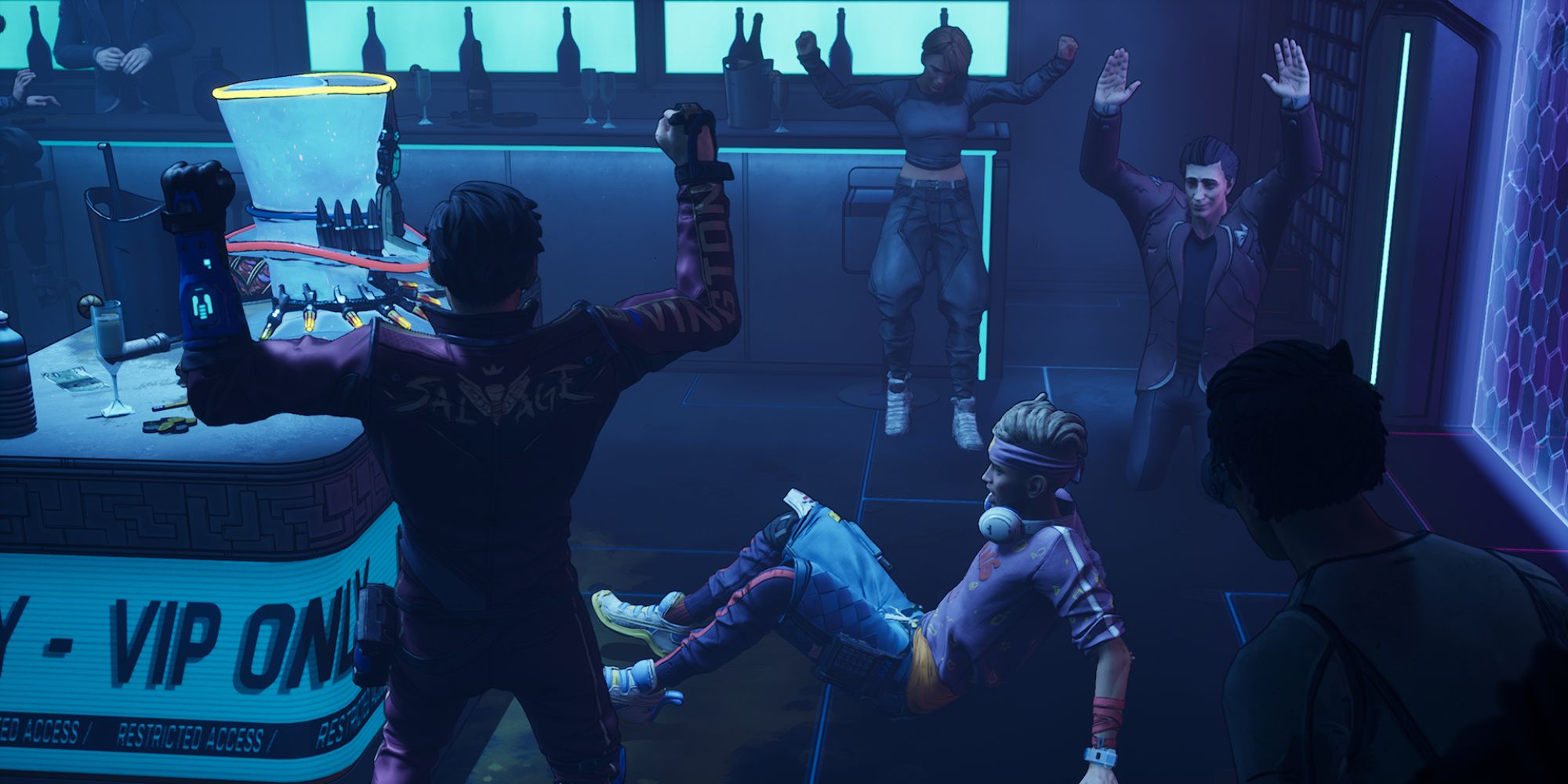 In the next scene, the protagonists visit the Angel Investor's Hacienda. Once there, they all get to experience their own version of paradise.

Octavio gets to hang out in a nightclub and meet one of his idols. There's not much to do gameplay-wise besides a short QTE when the protagonist tries the booze luge.

Next, you see Anu's version of perfection as she enters an incredibly impressive lab designed just the way she wants. And after the cutscene, you get to roam around it. 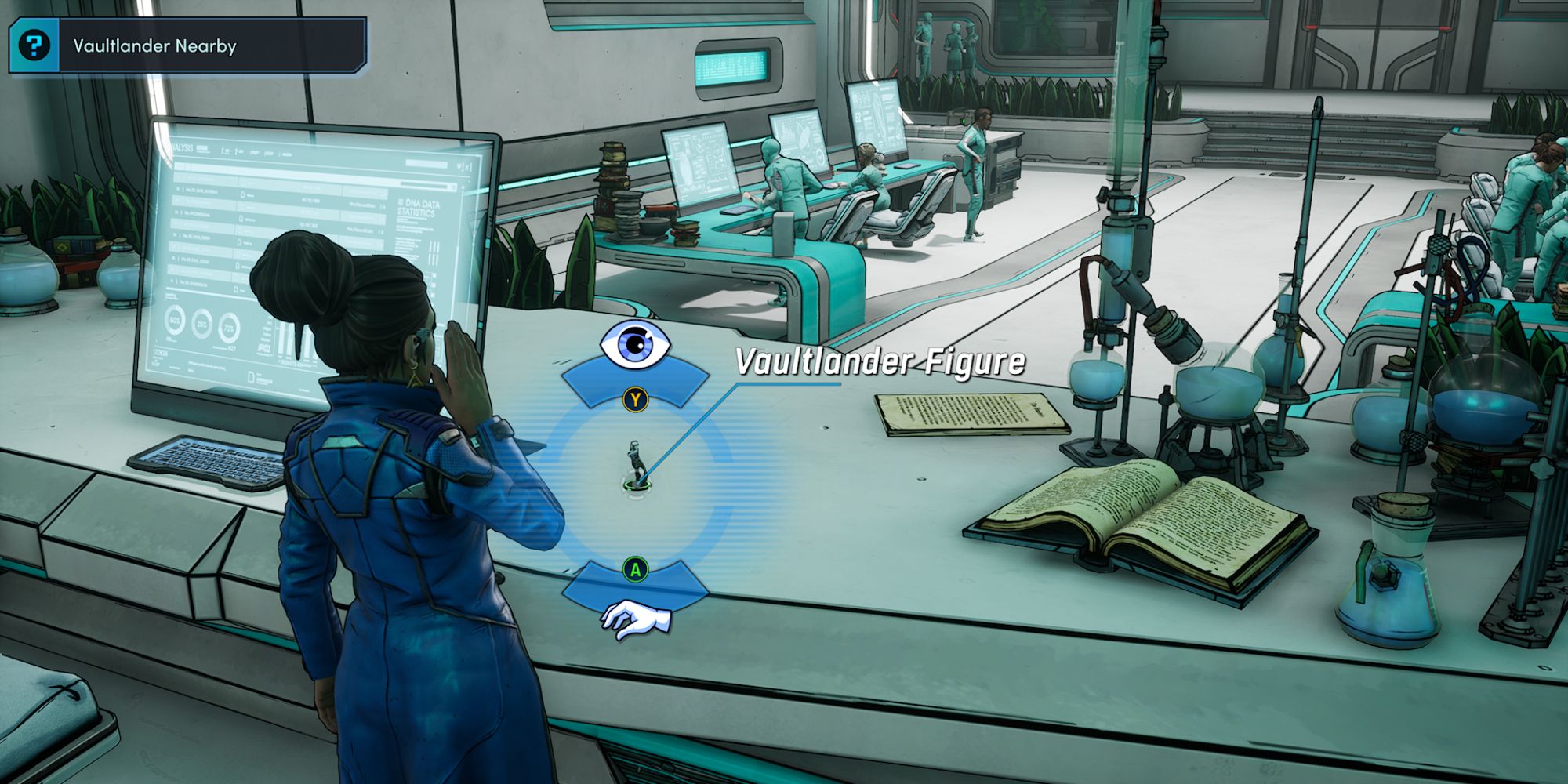 If you want to grab the Vaultlander, it is on the large desk at the back of the room. Simply pick it up. 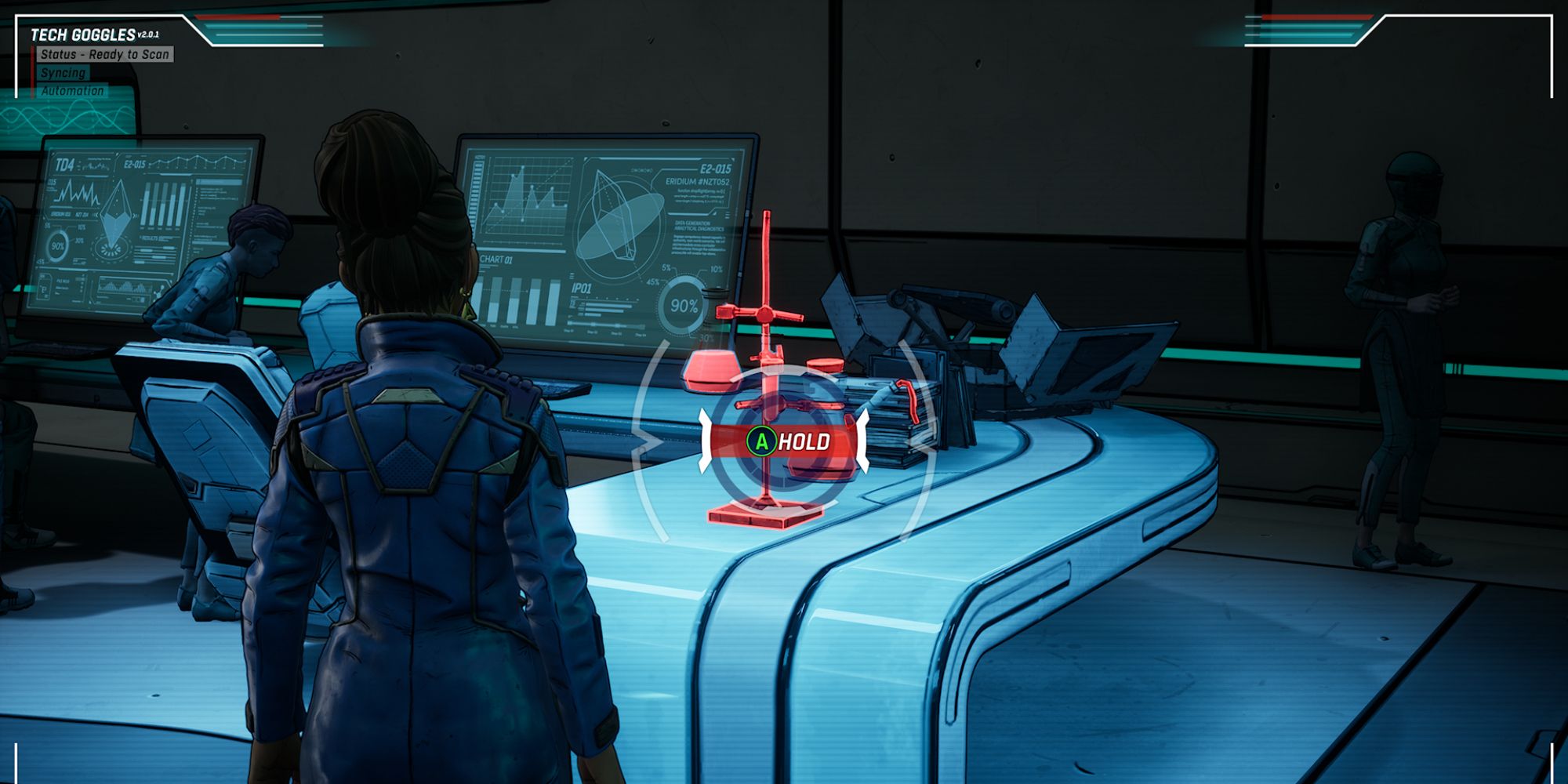 If you want to do the other optional thing in the lab, take a look at the chemistry set. It's on the other side of the room from the supercomputer, near the stairs up to the desk. Scan it to discover that it needs some alkaline. 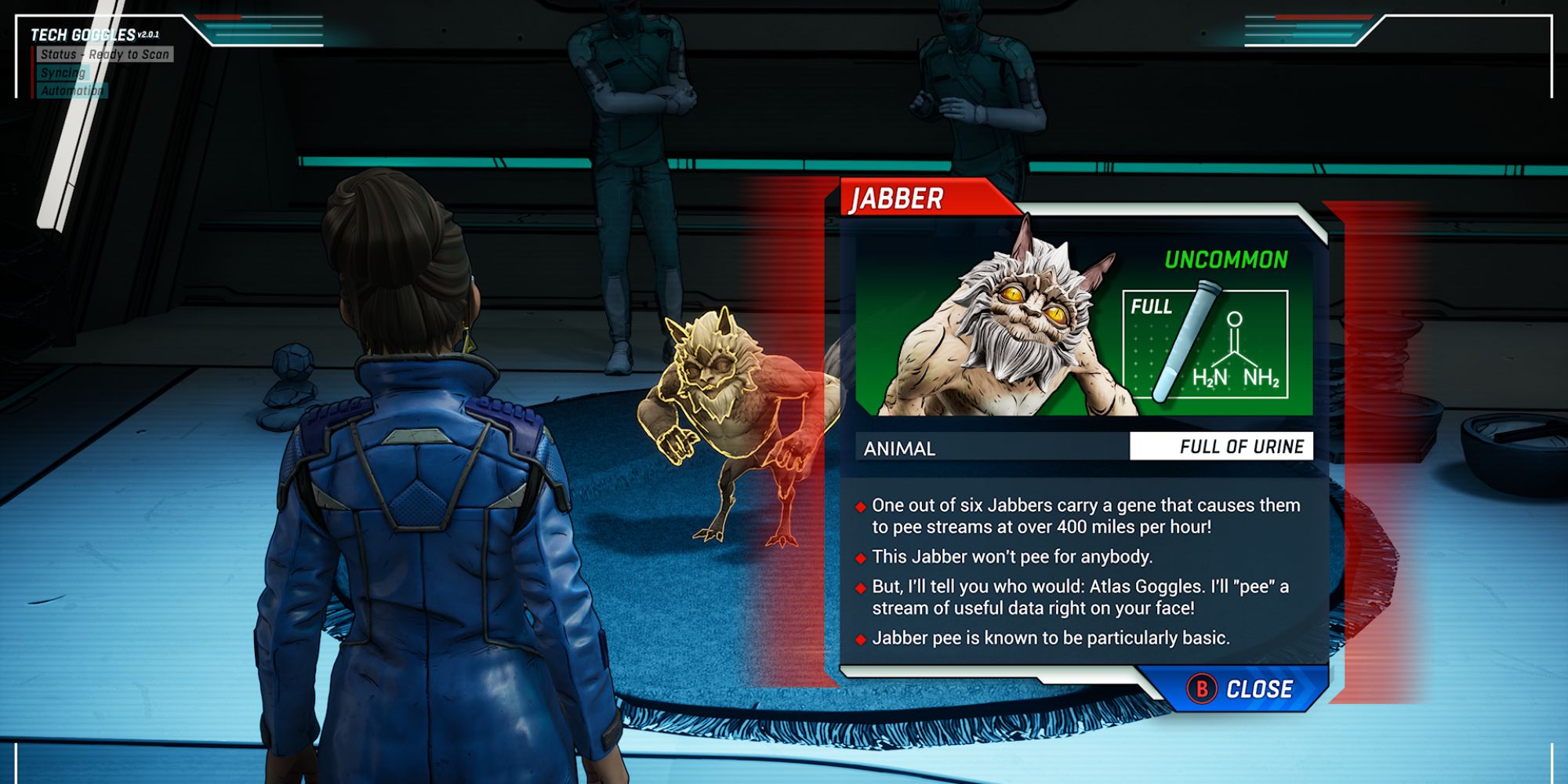 So, go over to the Jabber creature and scan it to find it's filled with urine, which can work as an alkaline. But to get him peeing, you need a bit of music. 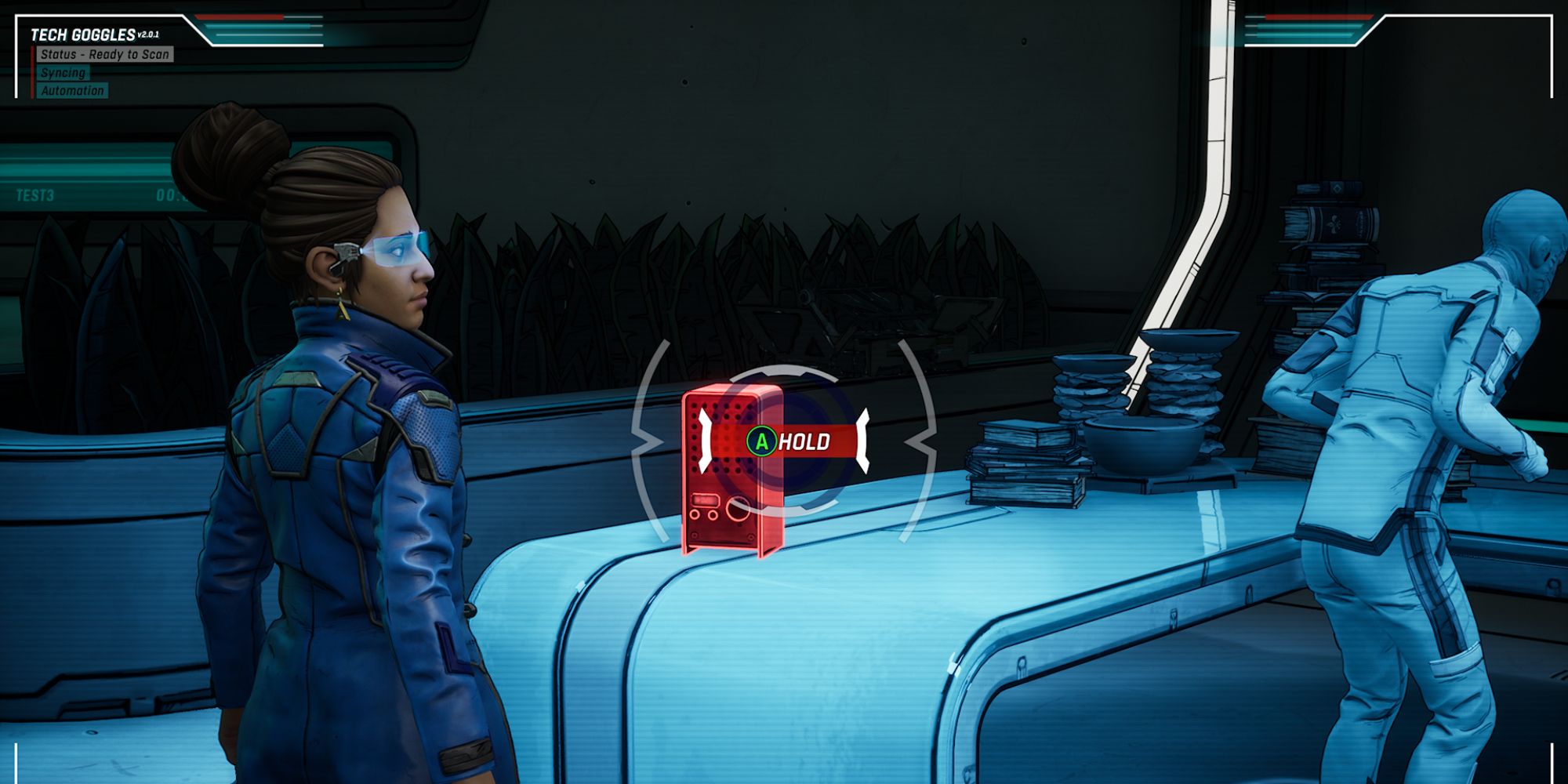 Therefore, head over to the radio directly facing the chemistry set from earlier. Scan the machine and then interact with it to get the music playing.

Now, return to the Jabber and get its pee sample. Finally, take the pee back to the chemistry set and pour it in. 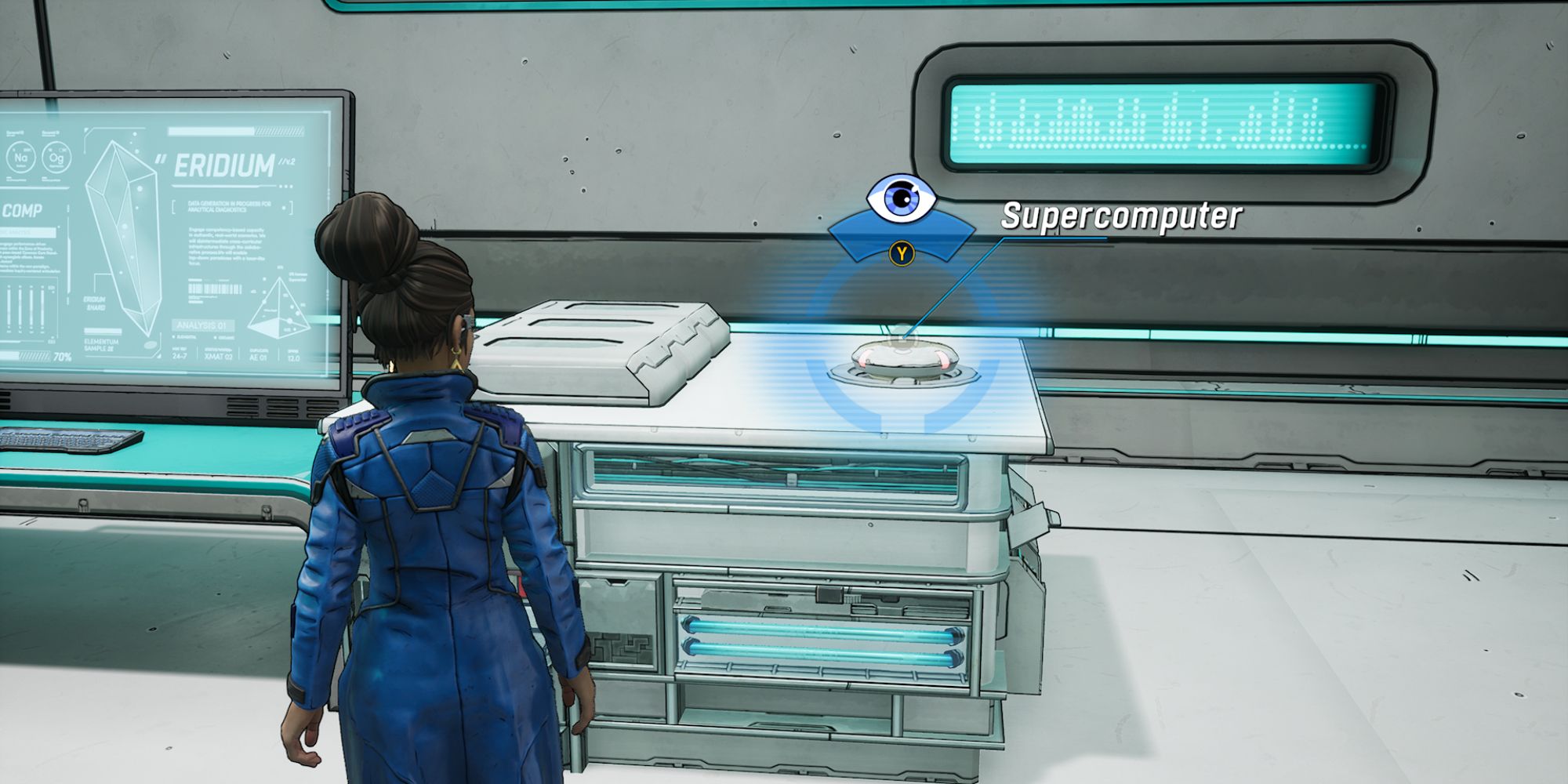 With the chemistry set puzzle done, you can continue with the main mission. So, go over to the supercomputer you were at when you gained control of Anu.

Look at it to find out that it's a congripulizer that's not working. You can scan the machine to try to figure out the problem, but that doesn't work. 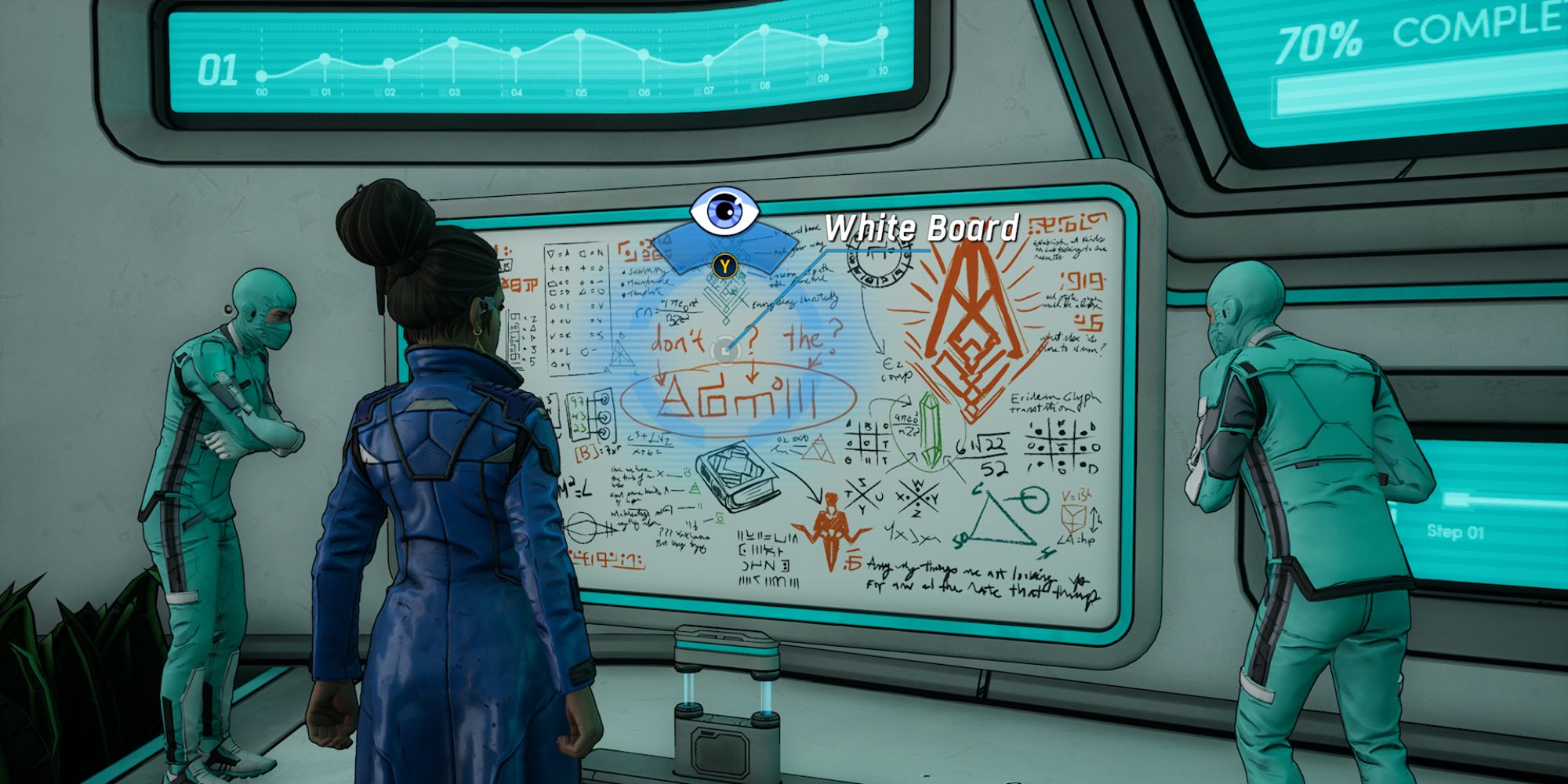 The next idea is to take a look at the whiteboard beside the large desk. Once again, your glasses' scanning ability is needed. 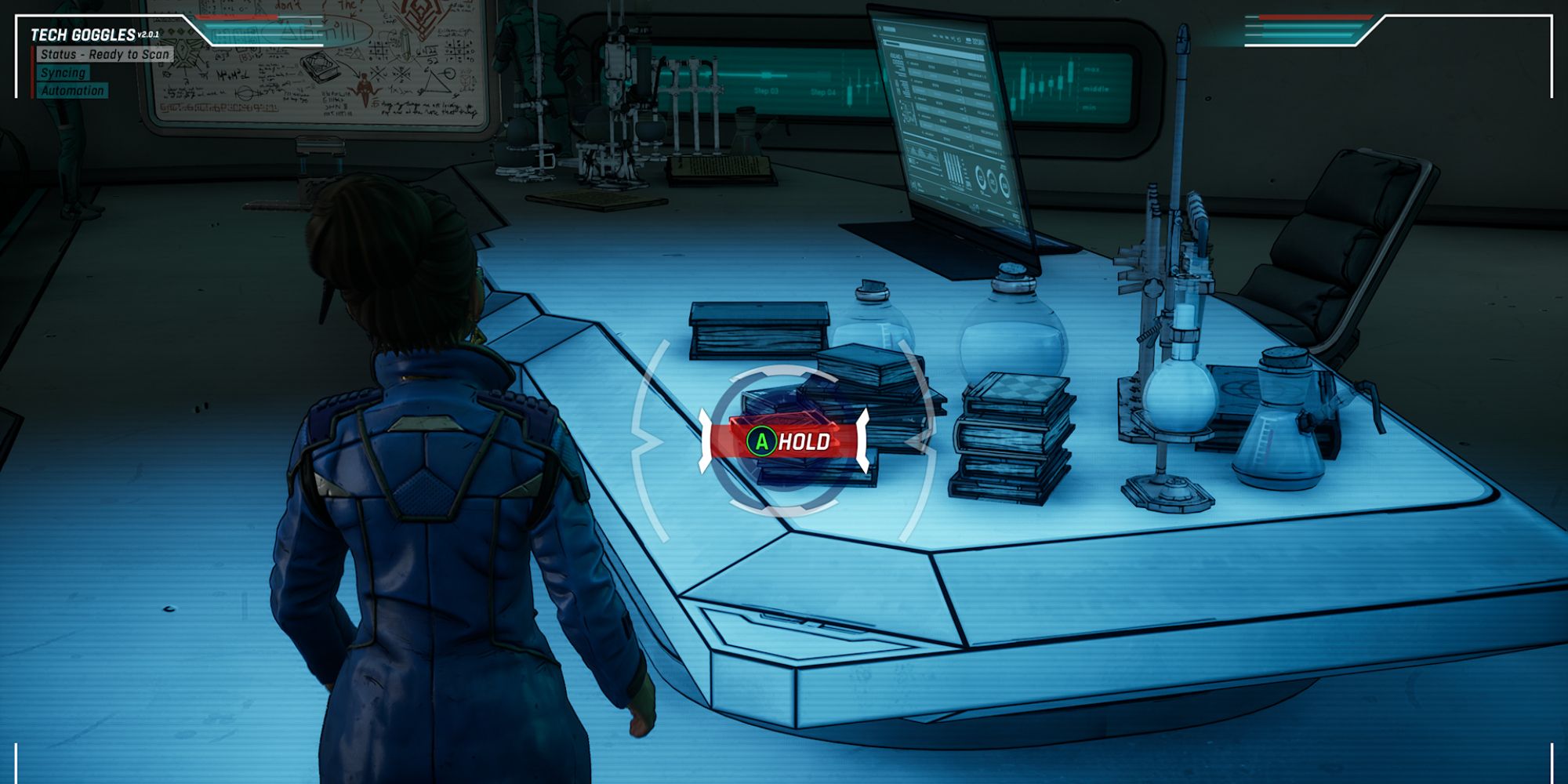 After you scan the whiteboard, you also must scan the little book that's on the edge of the desk. 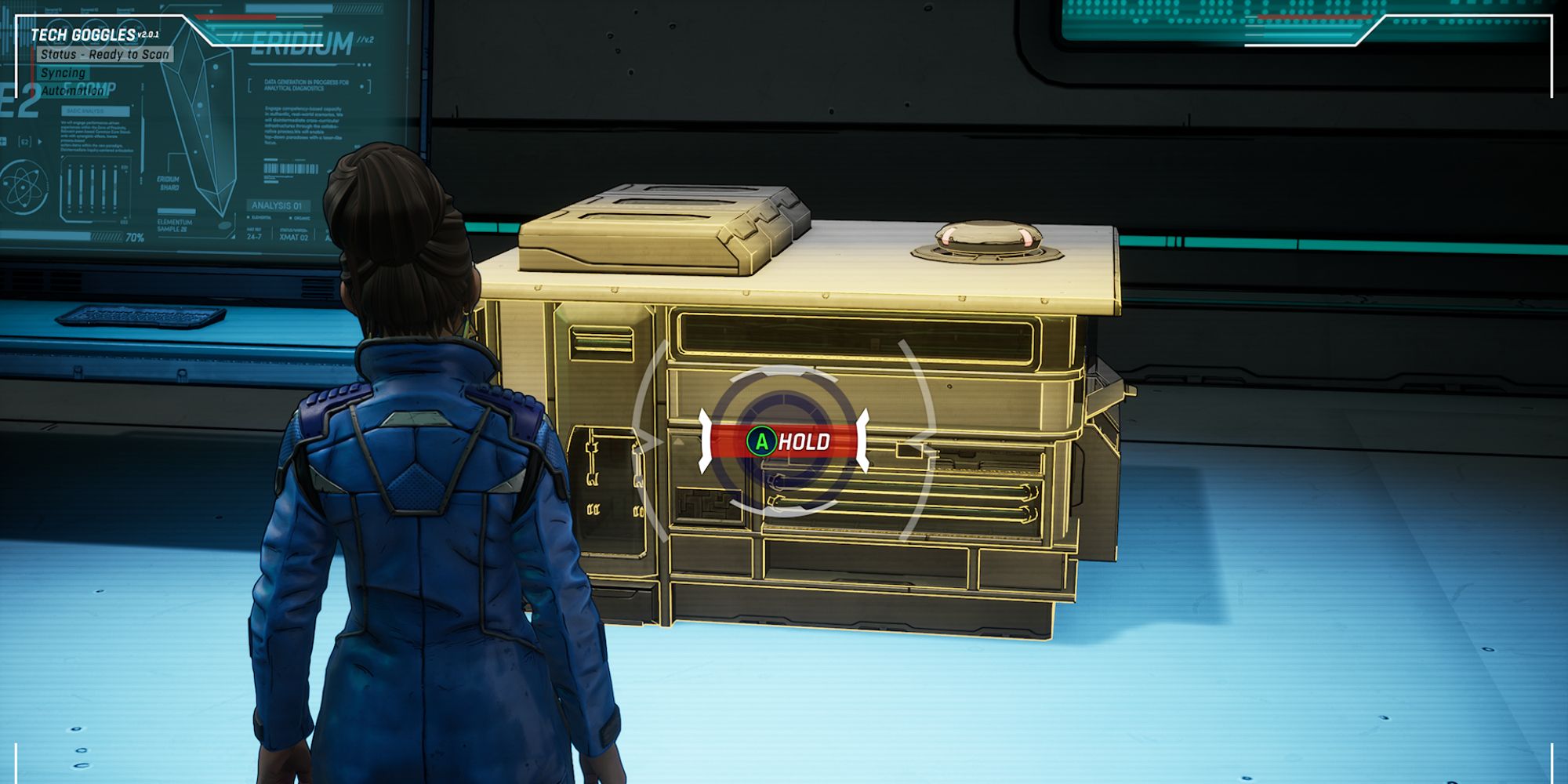 Then return to the whiteboard and take another look at it. After that, return to the congripulizer and scan it. Anu nearly gets it working, but it needs one final hit. This leads to another slapping tech minigame. 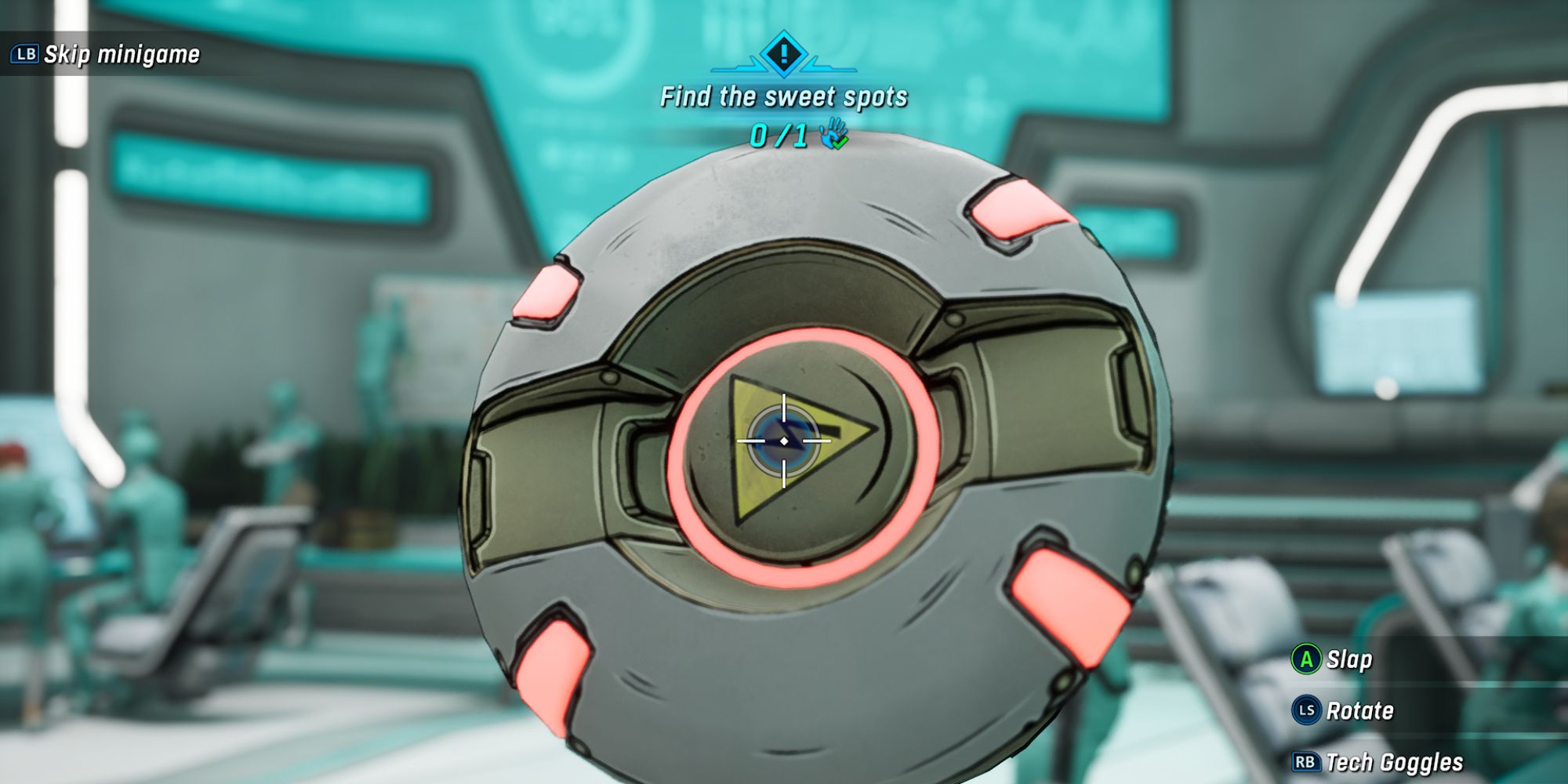 Rotate the thing and slap the circle on top. 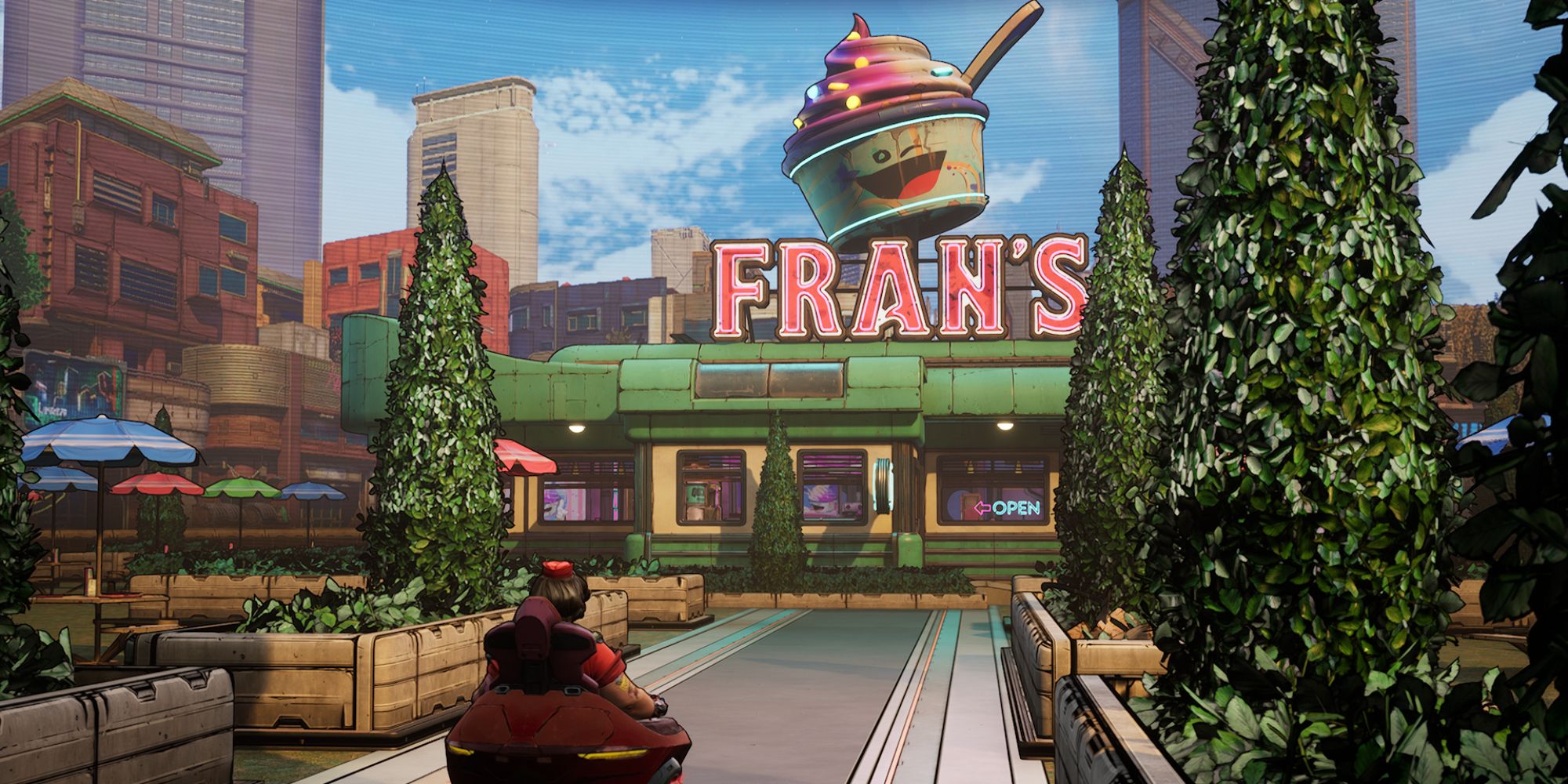 In Fran's version of paradise, her frogurt shop gets transformed into a franchise. Plus, she gets a $5 billion signing bonus.

After a cutscene explaining the situation, you get to roam around her refurbished shop. And you can acquire two Vaultlander figures in the process. 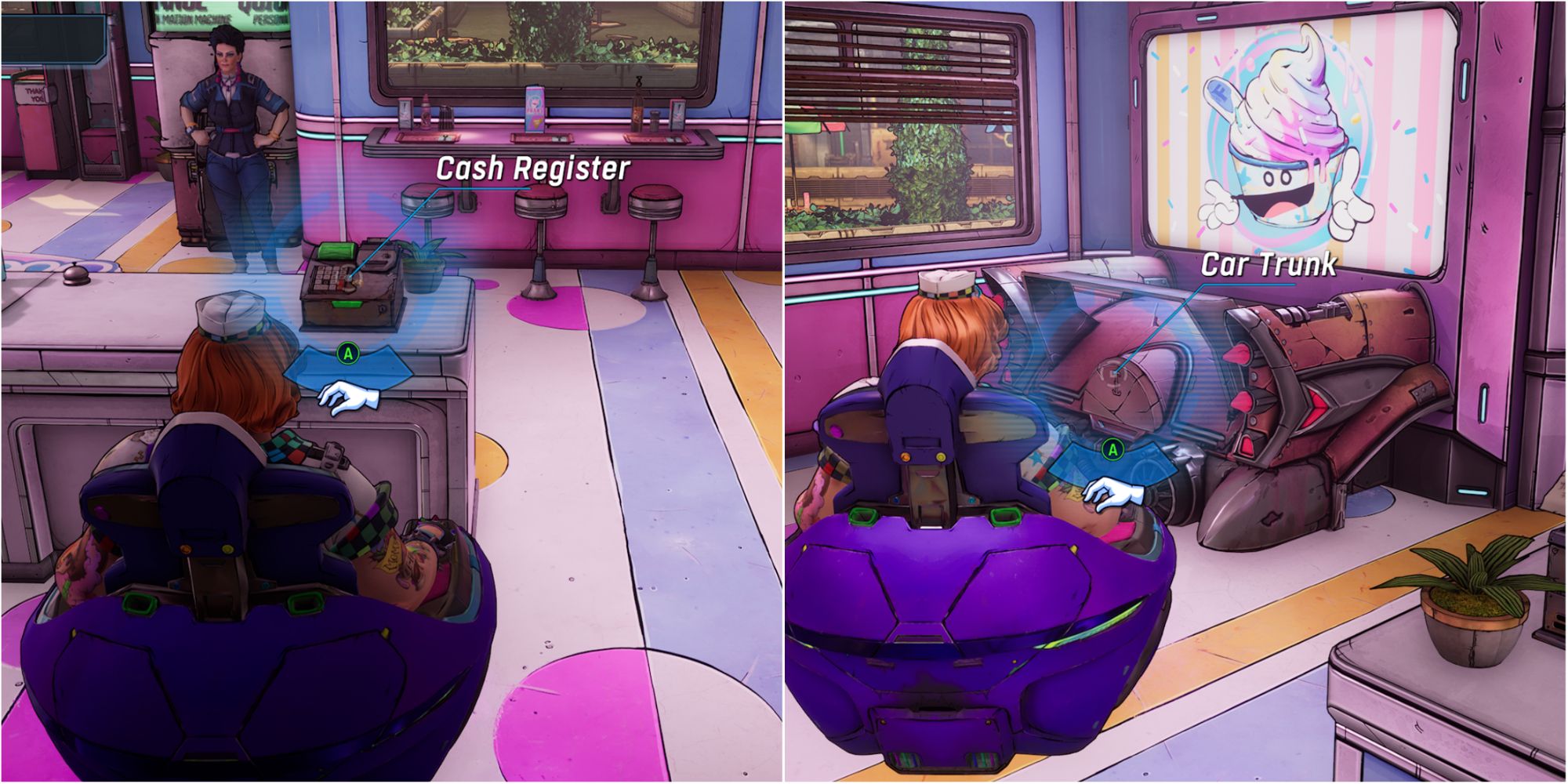 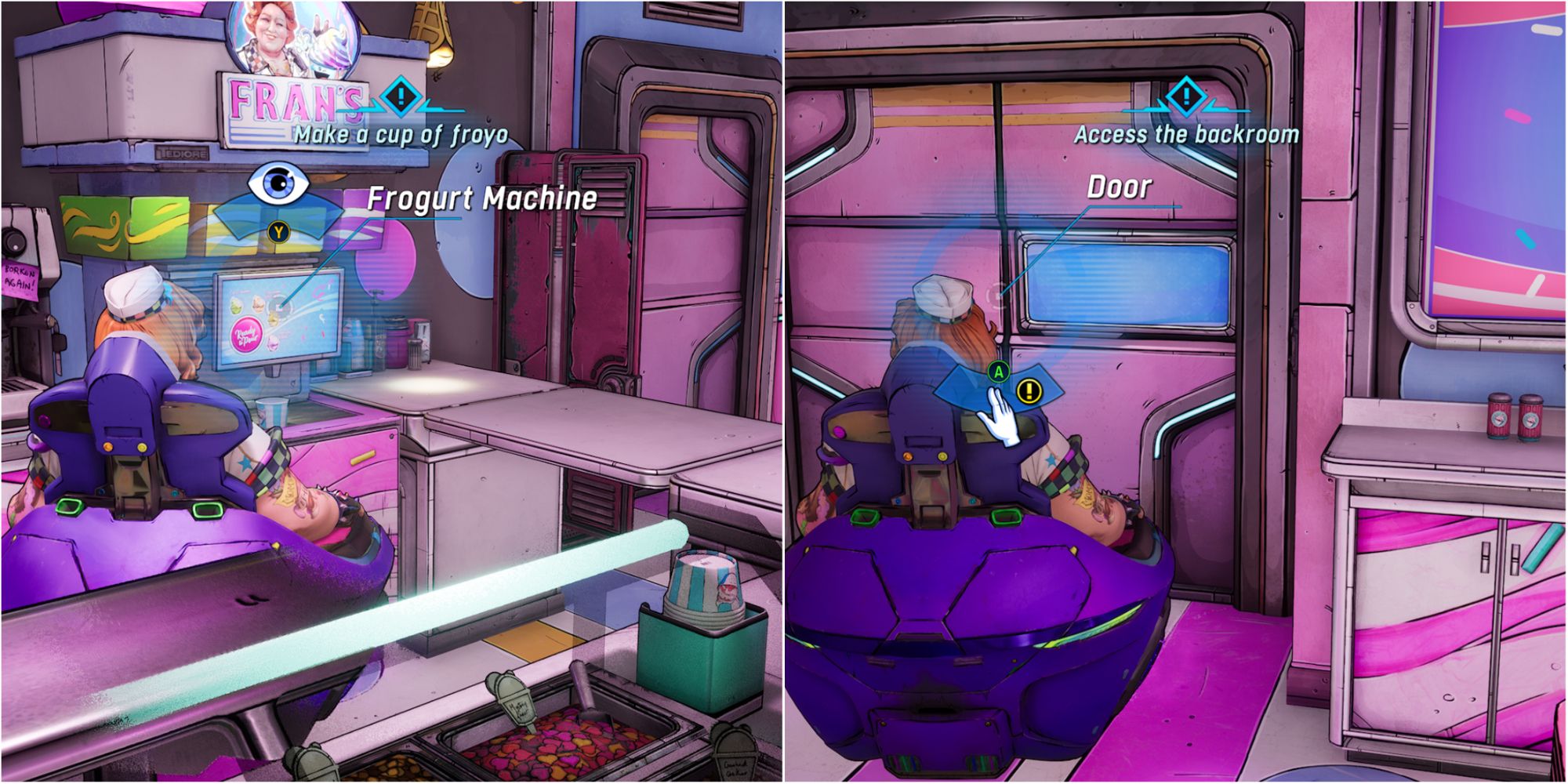 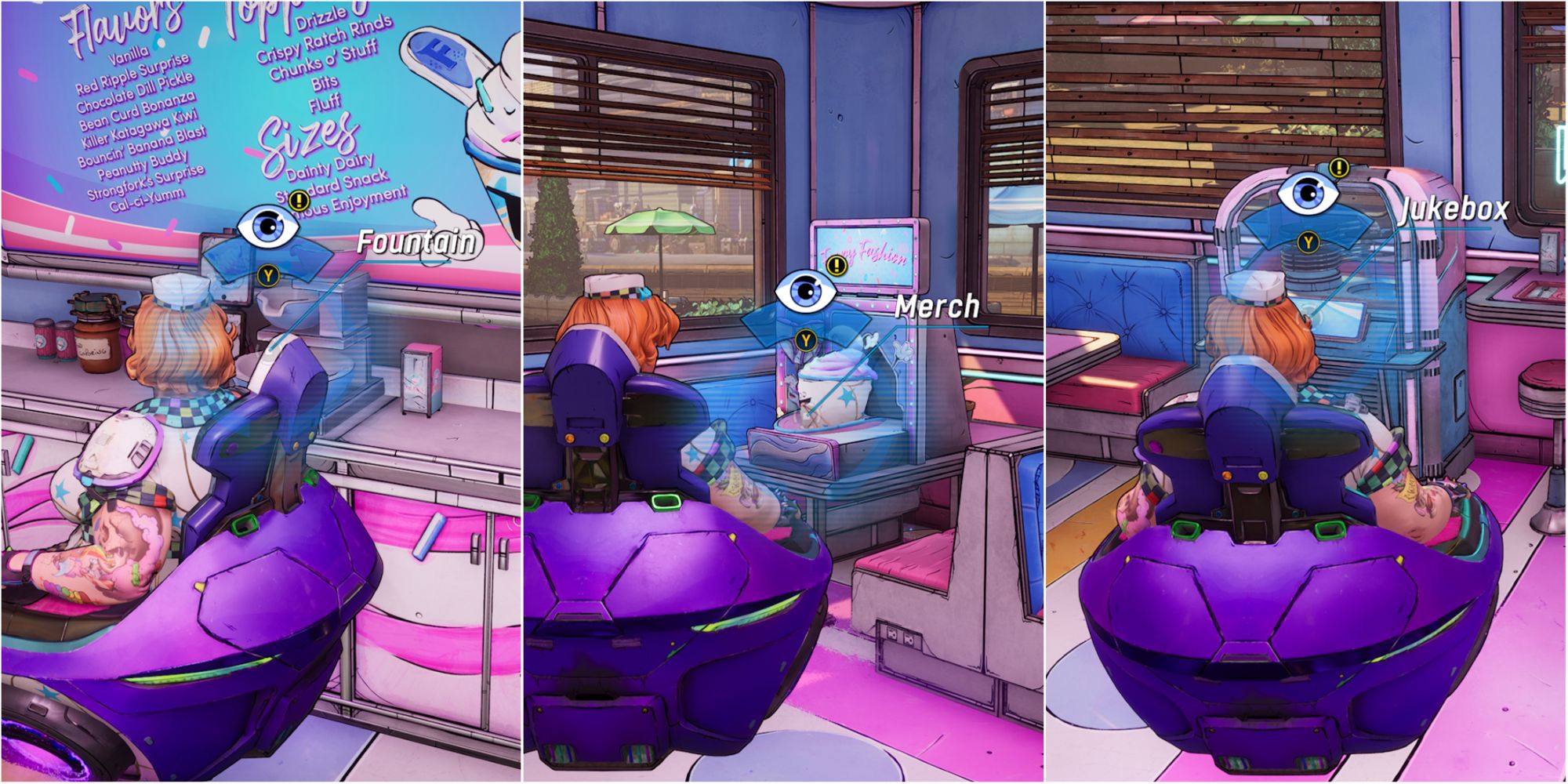 It also has an issue, as it'll only let your through when you provide a traumatic memory. To get one to come out, you must do a few chores. This means looking at and interacting with the following things: 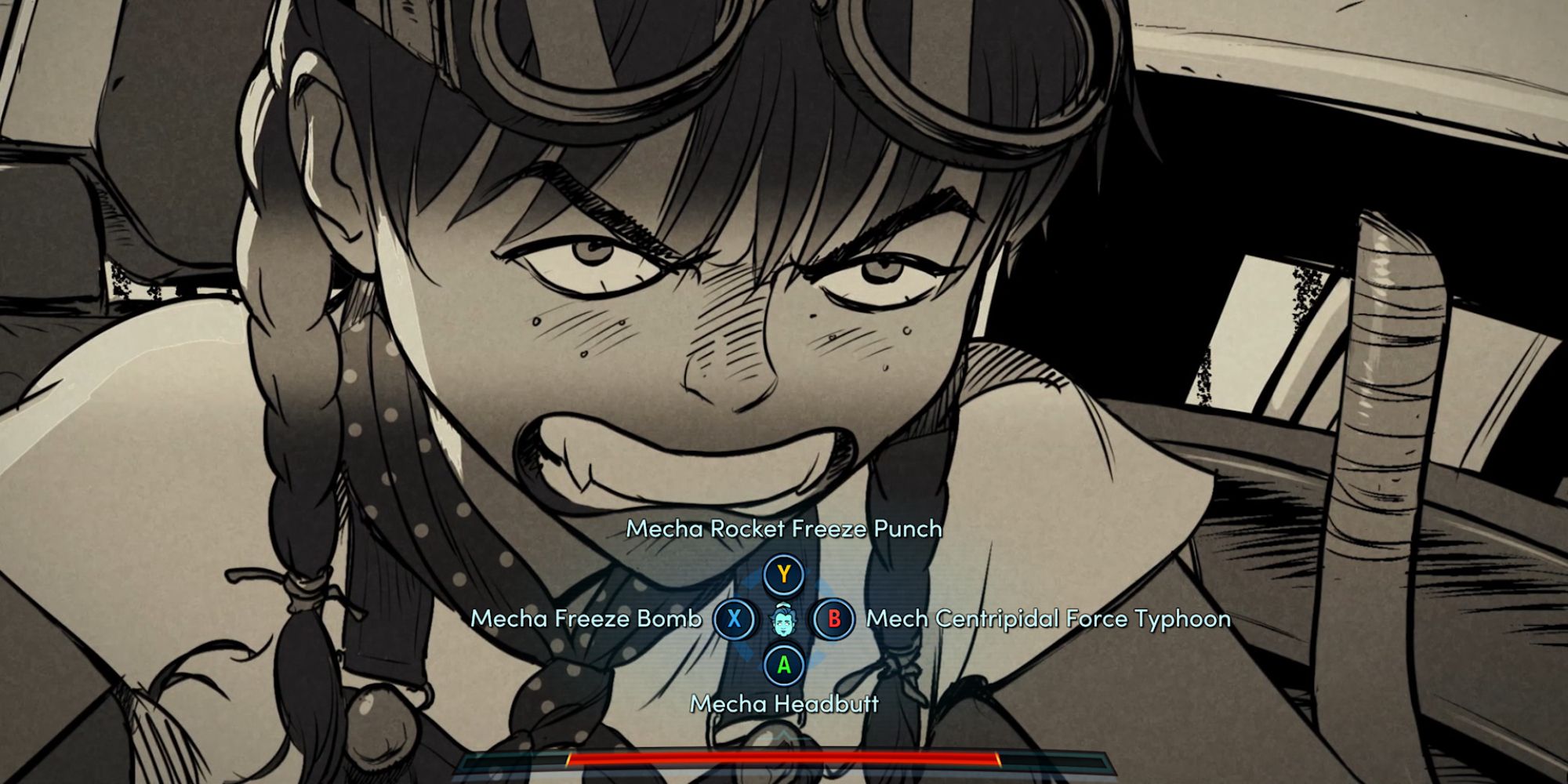 Now, you're capable of sharing your memory with the backroom door, and you can alter certain aspects of the memory through your choices. When Fran finishes telling her tale, the backroom door opens and you can finally go back there to repair the froyo machine. To do that, inspect the large creature, punch the pump, and lower the temperature of the milk tank. 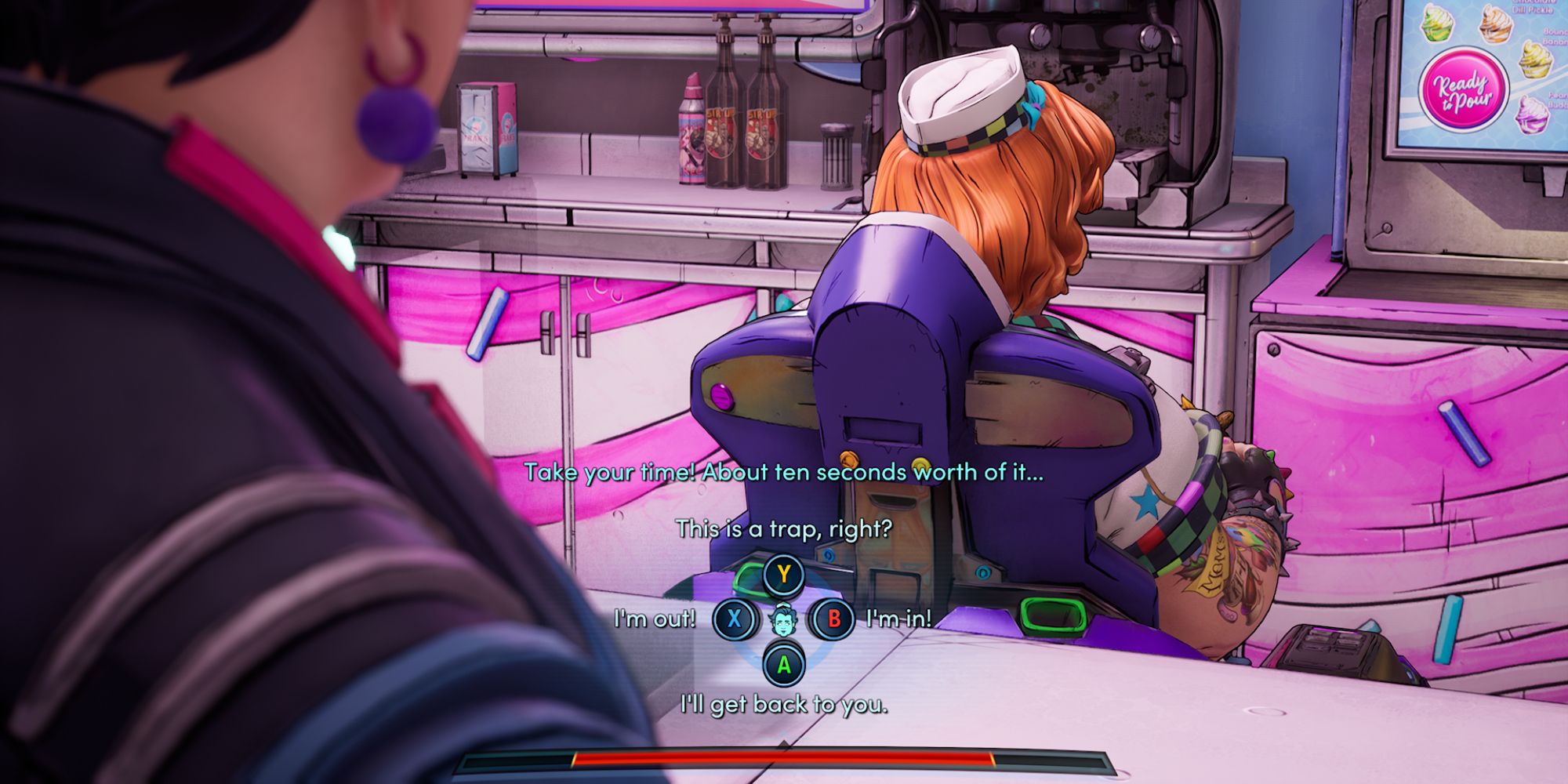 To finish this part, go back to the frogurt machine and make some froyo. Then you have one last dialogue choice. If you select "this is a trap, right?" or "I'm out," you freeze the woman who's trying to sell you on the shop. 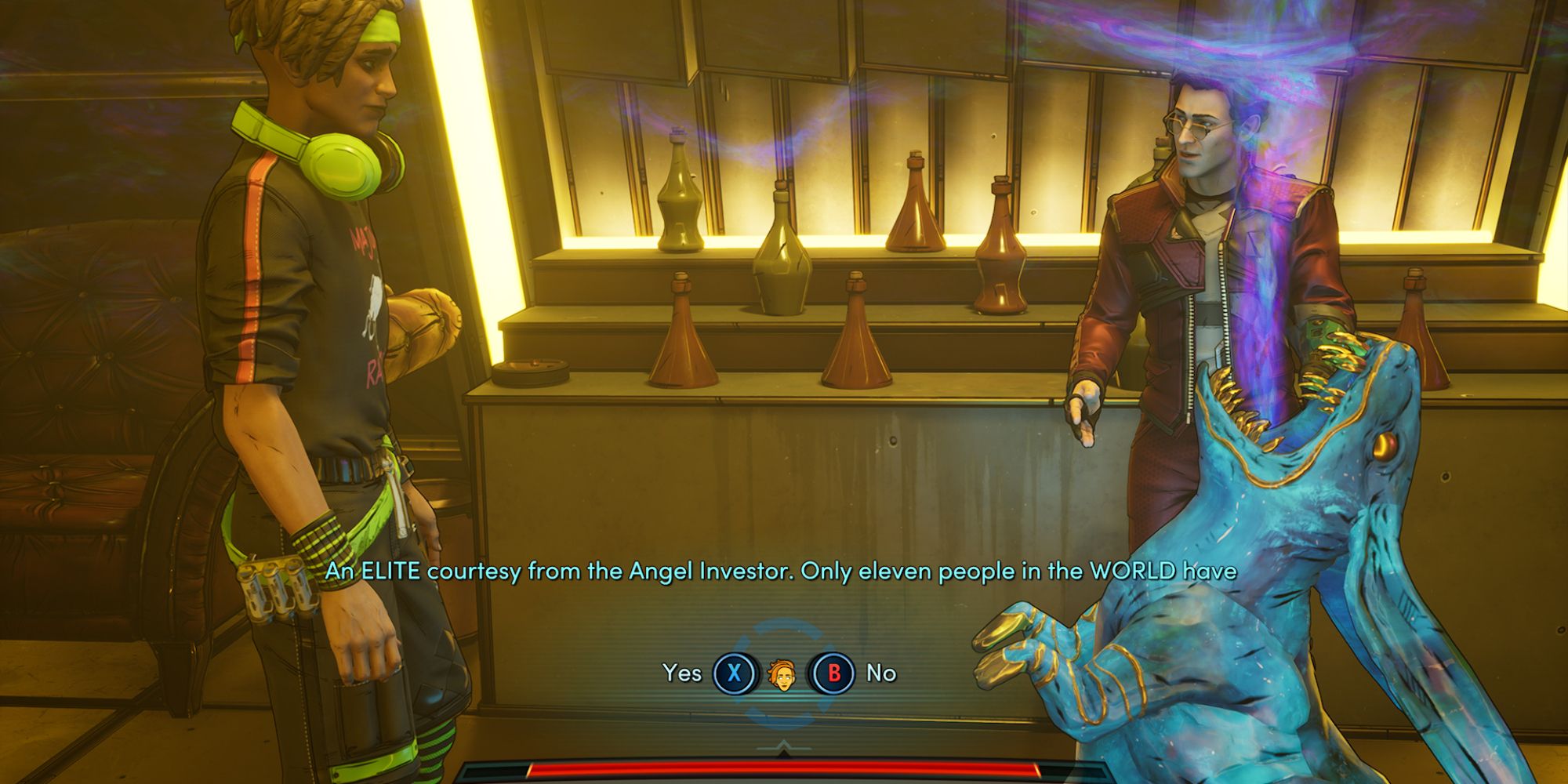 It turns out the paradises were tricks, as Anu and Octavio both get locked up – whether or not Octavio takes a hit of the belcher doesn't change that. It's up to Fran to save them. 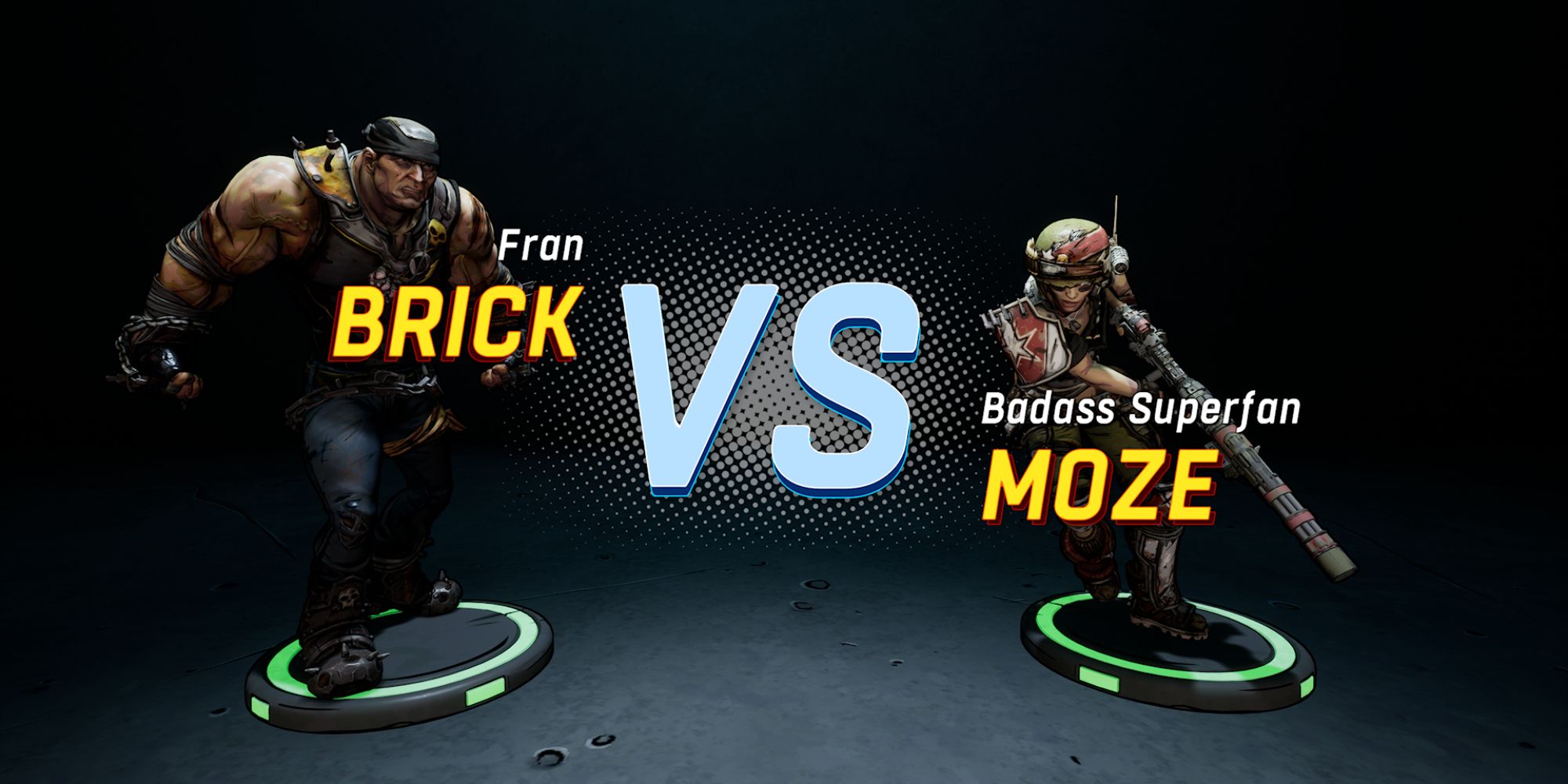 First, you must save LOU13, who is trapped in a socket. In your way, though, is the Vaultlander-loving Badass Superfan, who wants a rematch from the battle in Fran's shop.

Beat him to get to LOU13 and acquire the Moze Vaultlander. Then hold the button prompted to save the bot. 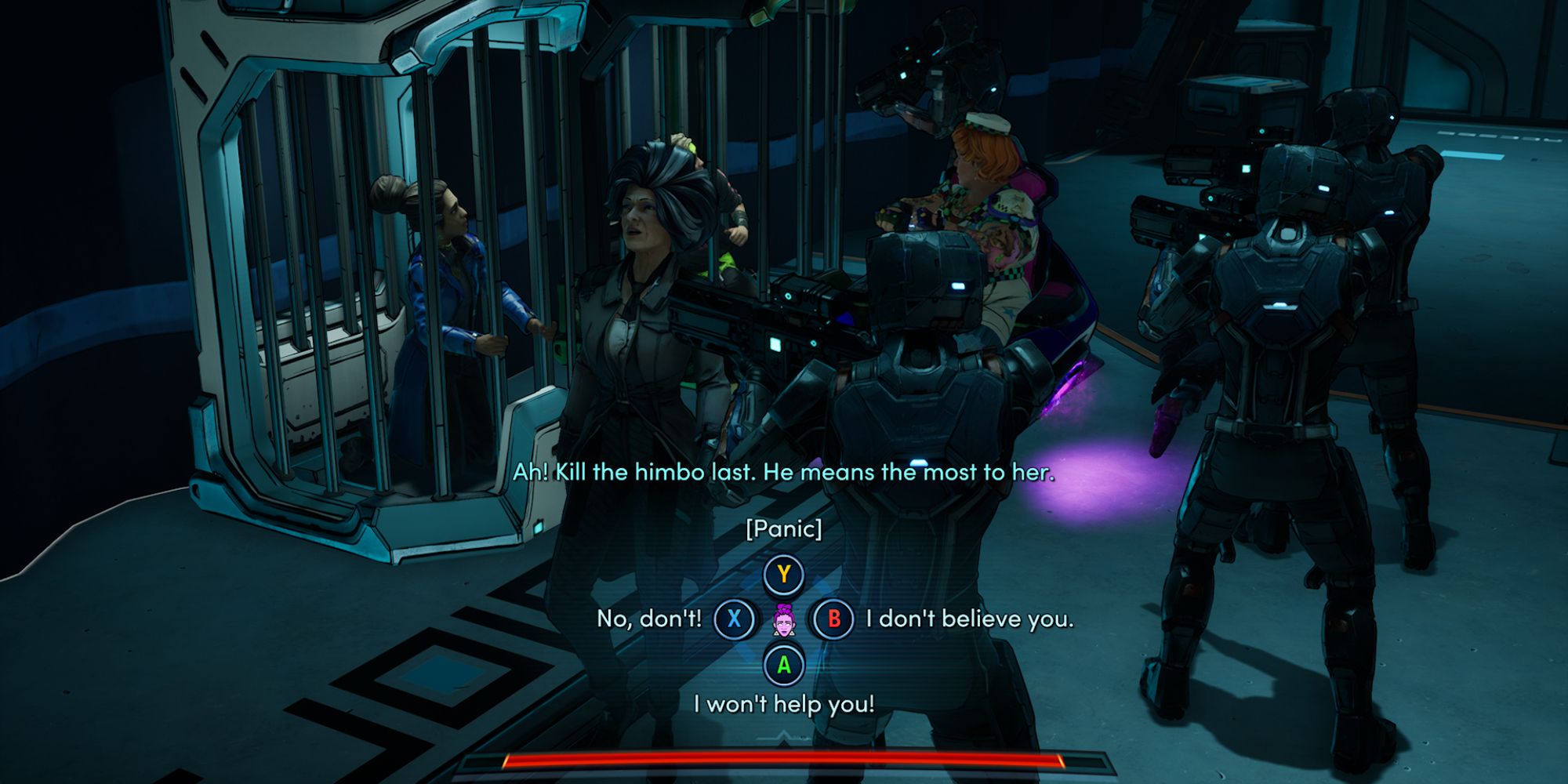 Afterward, there is a long scene that is vital to the story. There aren't any major decisions in the sequence, though.

The only choices you must make are dialogue ones, which don't impact the narrative too much, outside of altering your skateboard score. However, make sure to keep an eye out for the several button prompts that appear during the scene.

Once the cutscene is over, so is the episode.