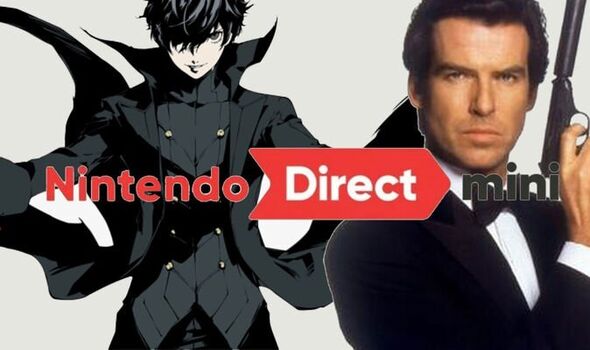 Confirming the upcoming broadcast, the official Nintendo UK Twitter posted: “A new #NintendoDirectMini: Partner Showcase is on the way!

“Watch on-demand via our YouTube channel from 2pm (UK time) on 28/06 for roughly 25 minutes of info on upcoming third-party #NintendoSwitch games.”

In terms of what could be announced, seeing as it’s a Direct focused on third-party games updates on Zelda Breath of the Wild 2, Splatoon 3, or even games such as Metroid Prime 4 or the rumoured new Donkey Kong seem out of the question.

However, there is one long-rumoured game that could feature in the Nintendo Direct.

Earlier this month Microsoft dropped the surprise announcement that Persona 3, Persona 4 and Persona 5 would not only be coming to Xbox for the first time but also Xbox Game Pass.

Atlus also confirmed these games were heading to PlayStation and PC, with the Switch the only notable platform that didn’t have ports confirmed.

This was a bitter pill for Switch gamers to swallow as for years Nintendo fans have long been requesting these iconic JRPGs to come to their platform.

However, a prominent leaker has claimed that Persona ports are still coming to the Switch in the future.

In a post earlier this month Zippo said: “Persona 3 and 4 are coming to Switch. Unsure of 5 Royal at the moment.”

So, it looks like Persona 3 Portable and Persona 4 Golden may be heading to the Switch, with an announcement possible during this week’s Direct.

If Persona 5 Royal doesn’t get ported over to the Switch it would be a surprise, considering it will be available on all other formats.

The Switch does have one Persona 5 game – the spin-off sequel Persona 5 Strikers – but the mainline RPG is the game fans have been hoping will come to the Switch, ever since the game’s protagonist Joker was announced as a Super Smash Bros Ultimate DLC character.

It had been thought this updated version of the N64 classic shooter would feature in the Xbox and Bethesda Games Showcase that happened earlier this month, but that jam-packed event came and went without any word on the heavily tipped project.

So it’s possible the Goldeneye Remaster could instead be getting announced at this month’s Nintendo Direct, with the revamped Rare game possibly coming to Nintendo Switch Online.

As always with rumours, it’s best to take things with a pinch of salt until official confirmation.

But thankfully fans don’t have long to wait to find out for certain with the next Direct just hours away from happening.

Express.co.uk will be keeping you up-to-date on all the big news coming in from the June 2022 Nintendo Direct Mini tomorrow.