The food in Pentiment doesn't look realistic. That does not stop it from looking delicious.

Etched with the same heavy lines as the rest of the game, the spreads Andreas Maler frequently finds himself enjoying as he traipses around Tassing and neighboring Kiersau Abbey are simple and stylized. As Andreas attempts to get to the bottom of a mysterious murder, he much more frequently gets to the bottom of a big bowl of hearty pottage. Pentiment's food isn't rendered in the gorgeous detail lavished on the dishes in a big game like Monster Hunter World — a skilled artist could reproduce them with a pen and paper in a minute — but they play an important function in making the town of Tassing feel like a welcoming place.

As you play through each day, you have decisions to make about where you will eat each meal. Once the murder occurs, the hours seem to pass by so quickly that the times when you get to sit down with some of the townfolk feel like the only moments of respite. Despite being a game where your primary verbs are reading and chatting, Pentiment can feel positively frantic as you race to assemble as much evidence as possible before you need to present your case. Though stopping for a meal sometimes uncovers helpful information, the primary importance of dinner is to give Andreas a chance to rest up and get to know the people of Tassing. 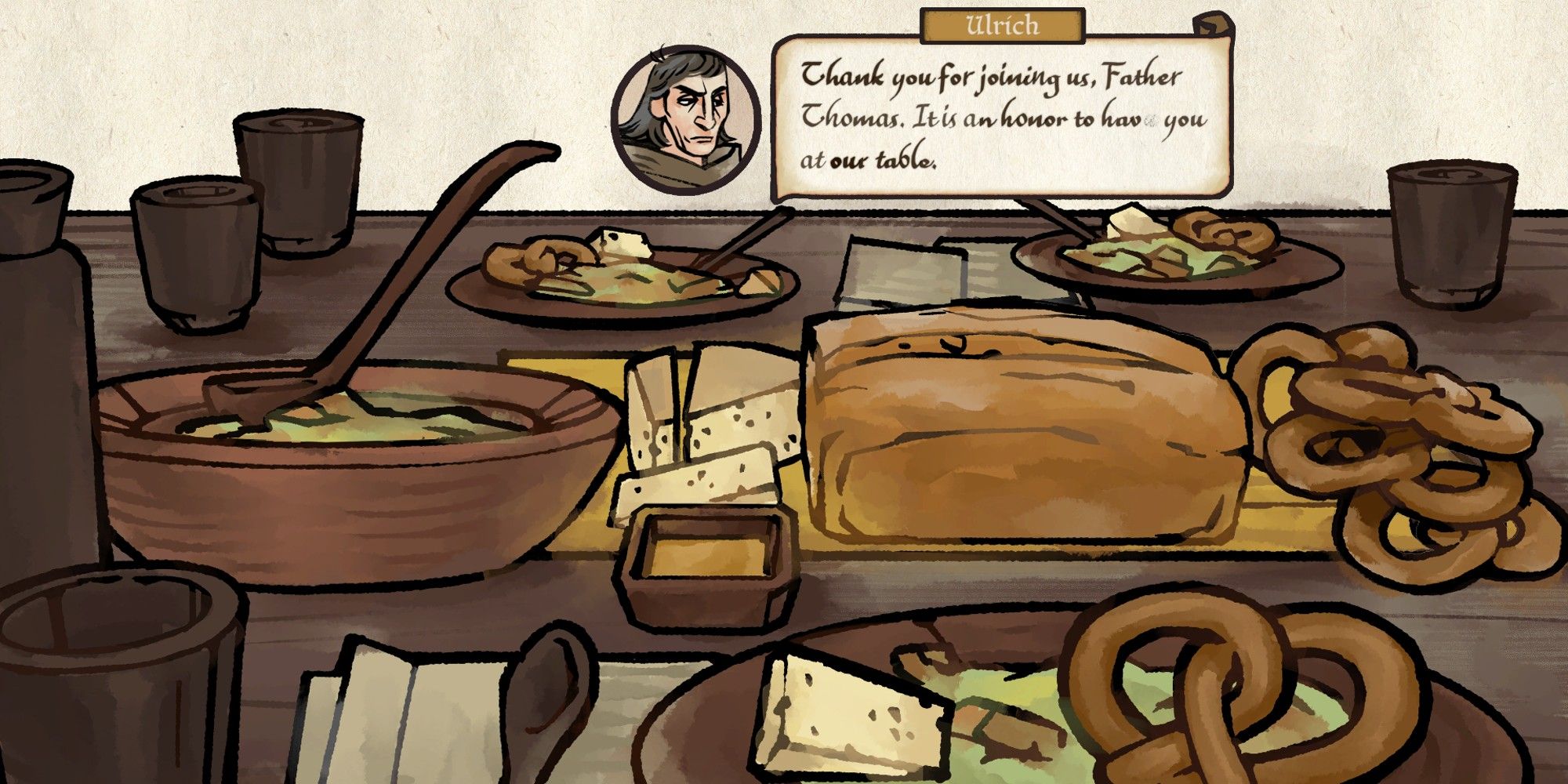 It's easy to underrate the importance of slice-of-life moments in a video game, but they often stick with me as much as any set piece. In God of War Ragnarok — which I've been playing through at the same time as Pentiment — I treasured the scenes when Kratos and Atreus returned to Sindri's house to hang out with the companions in their party. Each character has a place to settle in, where they can relax, talk, or go about their tasks while in the company of friends. In Red Dead Redemption 2, it was the Van Der Linde gang's camp. Between missions, I frequently returned to Arthur's tent for a good night's sleep, grabbed a cup of coffee, and chatted with Dutch, Sadie, and Sean about what they'd been up to. That game had a greet button, Pentiment has meals.

Like RDR2, Pentiment provides the opportunity to roleplay small decisions during these dinners. In Red Dead, I liked to get coffee first thing in the morning, and head off to drink it alone in a quiet corner of camp with a beautiful view of nature. Pentiment allows me to roleplay culinary preferences in a similar way. In a meal, you typically have three items to choose from — say a slice of bread, a wedge of cheese, and a bowl of pottage. You pick the order in which you eat them, and conversation continues between bites. I picked the order on the basis of what seemed like it would taste best. I wouldn't want to have nothing left after I finished my stew. If it's bitter, I would want to finish the meal on a sweeter or more neutral taste, so I'd leave the bread or cheese for last. Plus, you can use the bread to sop up the extra soup. That's just good sense.

Pentiment's food, then, is an extension of its role playing mechanics. Though it's more adventure game than RPG, it allows you to make a lot of decisions about who Andreas Maler is and what matters to him. It's an excellent game, in part, because those role playing decisions extend to something as small as the food on your plate.