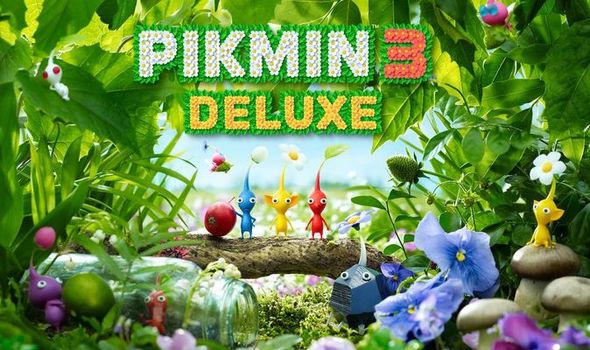 Pikmin 3 is the latest Wii U game to get a Nintendo Switch re-release, only this time as part of a Deluxe Edition featuring the core game and one or two extras.

The campaign – which remains untouched bar a few quality of life updates – sees explorers Alph, Brittany and Charlie venture off in search of food for their home planet of Koppai.

After crash-landing on planet PNF-404 and becoming separated, our intrepid explorers stumble across a species of helpful plant-like creatures called Pikmin.

If you’ve never played a Pikmin game before, you command a party of up to 100 of these creatures, using them to destroy barriers, build bridges, collect food, fight the local wildlife, and even find the missing parts of your ship.

You’d better be done and back in your ship by sundown, however, because that’s when the really dangerous predators come out to feed.

With time and supplies limited, you’ll need to be highly organised in order to succeed, which means figuring out each Pikmin’s strengths and using them accordingly.

Needless to say, Pikmin 3 throws a couple of new creatures into the mix, including rock Pikmin that can smash through barriers, and winged Pikmin that can fly over water and lift blockades.

If five different Pikmin types wasn’t enough to contend with, things become even more taxing when Alph, Brittany and Charlie are reuninted. At this point in the game you can split into three different squads, switching between them to solve puzzles and overcome obstacles.

On the one hand, having three squads of Pikmin means you’re better able to multi-task and explore, but the flipside is that it’s much harder to keep track of everyone.

Crucially, however, while Pikmin 3 can be chaotic, it’s not actually that complicated. If you’re organised enough and have a good stockpile of food, you could almost describe it as relaxing.

The game does a superb job of gradually and organically easing players into the action, introducing different concepts and gameplay mechanics at a nice, steady rate.

By the time you’ve hooked up with your crewmates and are forming different squads, you’ll already have a pretty good handle on the basics of collecting items, defeating enemies, spawning new Pikmin and solving puzzles.

Not only are the controls simple to get to grips with, but the Switch version increases the radius of your whistle, which makes it easier to regroup when things are getting dicey. Meanwhile, the enhanced lock-on feature improves your ability to switch between targets, which is handy when you’re collecting items and fighting enemies. These are small changes that make a big difference.

Whether solving puzzles, managing your crew/supplies or fighting huge monsters, Pikmin 3 is simple and intuitive enough not to be overwhelming, but challenging enough (under the right circumstances) to leave you satisfied when you have a successful expedition.

It’s also a really pleasant game to look at. The Pikmin are incredibly cute, the fruit looks good enough to eat, and if you’re ever feeling thirsty on a hot summer’s day, just one glance at the in-game water will leave you feeling suitably refreshed.

The downside is that unless you’re a completionist, the campaign is a tad on the brief side, and arguably a bit too easy. Fortunately, you can increase the difficulty of the game before you start playing, while a collection of new and returning game modes expand the experience beyond the charming story.

The pick of the bunch is the hugely entertaining Bingo Battle mode, where the aim is to collect random objects before your opponent. Missions also make a return, complete with white and purple Pikmin from the second game.

If you missed out on the Wii U version, or are new to the series altogether, then the decision to pick up a copy of Pikmin 3 is a real no-brainer.

A delightful adventure unlike any other strategy title out there, Pikmin 3 is a unique game in the very best sense of the word. 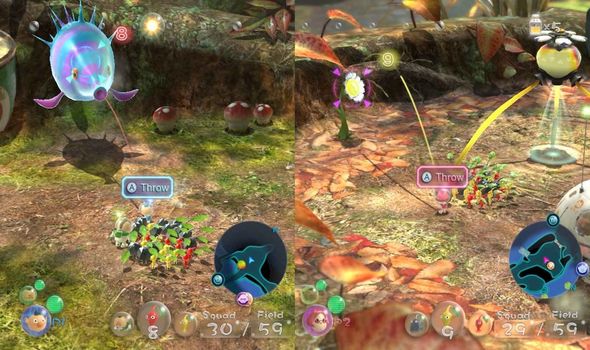 More up for debate is whether or not Pikmin 3 Deluxe packs enough extras to tempt back returning players.

The main event is the addition of new side stories starring original protagonist Captain Olimar. These missions offer a greater challenge than the main campaign, requiring players to make the most of their time and multi-tasking abilities.

They’re some of the best and most challenging missions found within the entire game, although the experience is over within 2-3 hours, so it’s not a huge injection of new content.

I would argue that the addition of couch co-op is a better reason to re-invest, provided you’ve got a partner you can team up with – because it doesn’t support online play.