As more expansions keep dropping for the Pokemon TCG, more collectors are jumping on board, cracking packs, and hunting for their favorite Pokemon cards. Crown Zenith is a special set, a sort of celebration for everyone to enjoy. Featuring cards with new artwork, special versions, and powerful reprints, there’s tons of fun for you to enjoy.

One of the best parts of Crown Zenith is that it features higher odds for opening rarer cards. With all sorts of fancy full art cards, secret rares, and more in Crown Zenith, let’s take a look at some of the most valuable cards in the set.

These prices all come from TCGplayer’s Market Value and are subject to change. 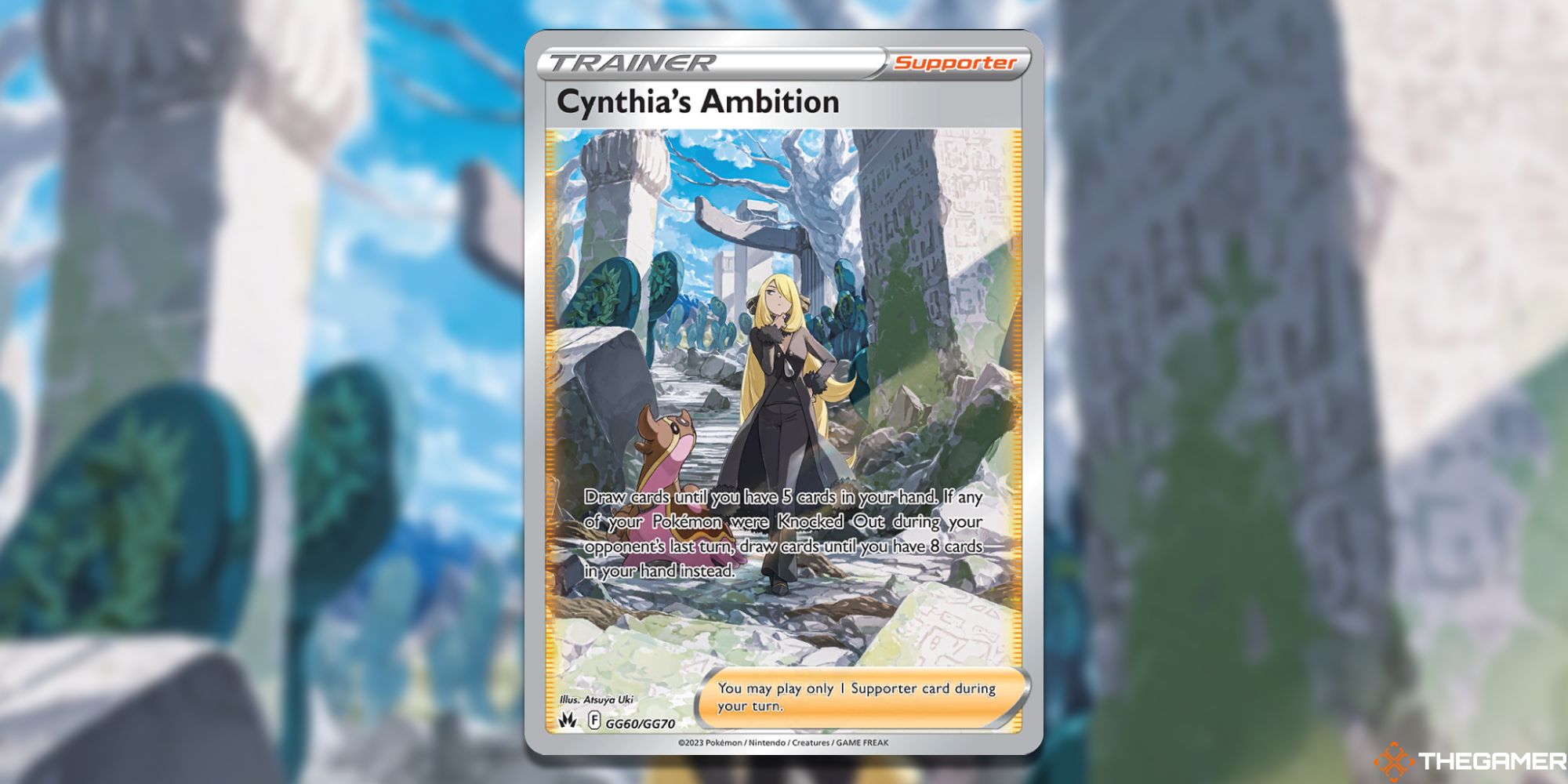 Sometimes a Pokemon card climbs in price because it has fantastic artwork that resonates with players. Other times it's because a card is particularly rare or plays an important role in a deck. Cynthia’s Ambition fills all these roles. Cynthia has been a fan-favorite character since her appearance in the Pokemon Diamond and Pearl era of the trading card game, helping to make this card a collector's item. 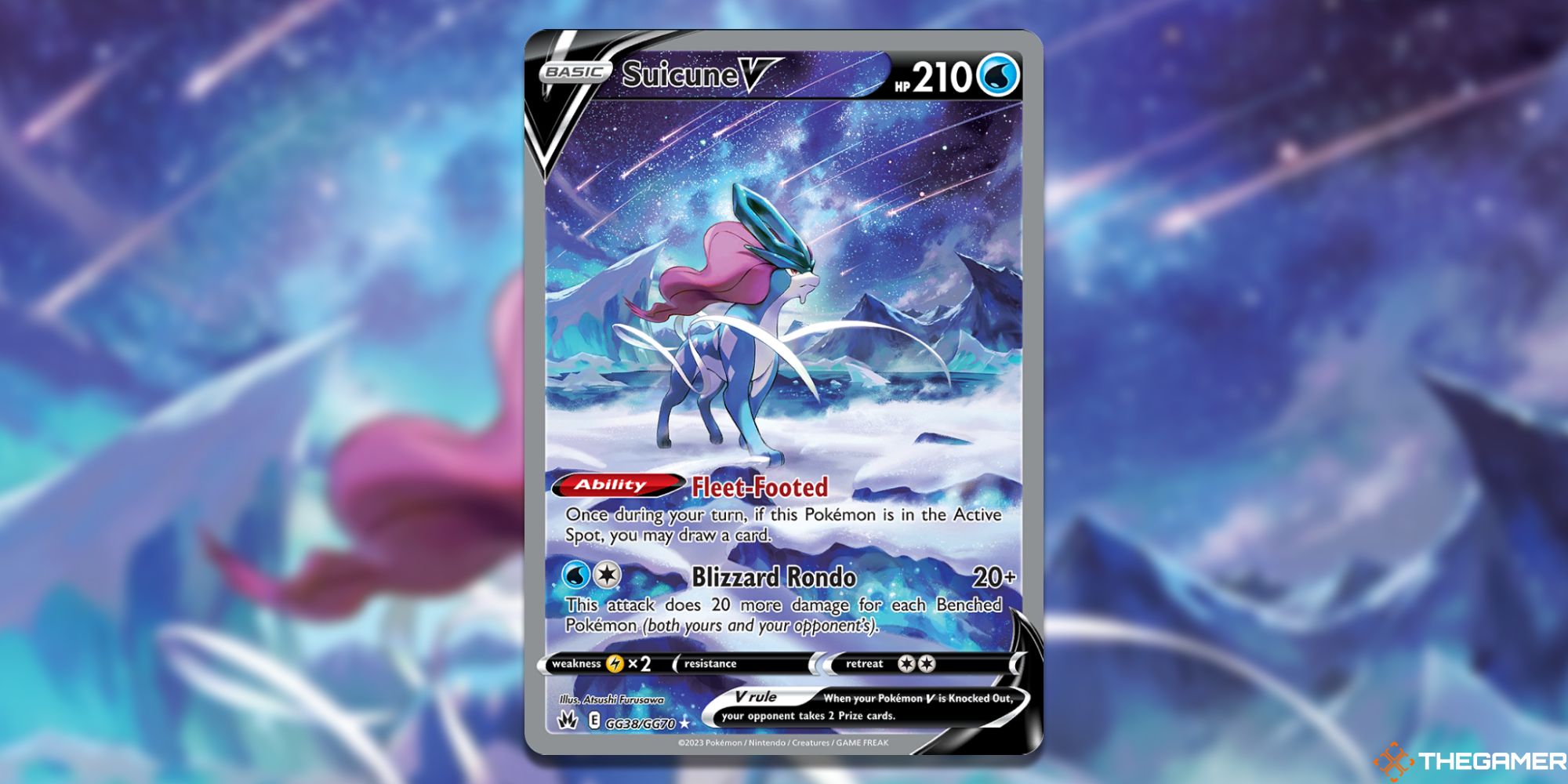 All three of the Legendary Dogs are in Crown Zenith, but the ultra-rare Suicune V takes the top slot among the three. Featuring art from Atsushi Furusawa, Suicine V can attribute its high value to both the lonely, desolate artwork and its playability. It slots right into decks playing Origin Forme Palkia VSTAR since they have very similar attacks. Not to mention, its Fleet-Footed ability lets you draw a card when it's in your Active Spot, giving you a card advantage over your opponent. 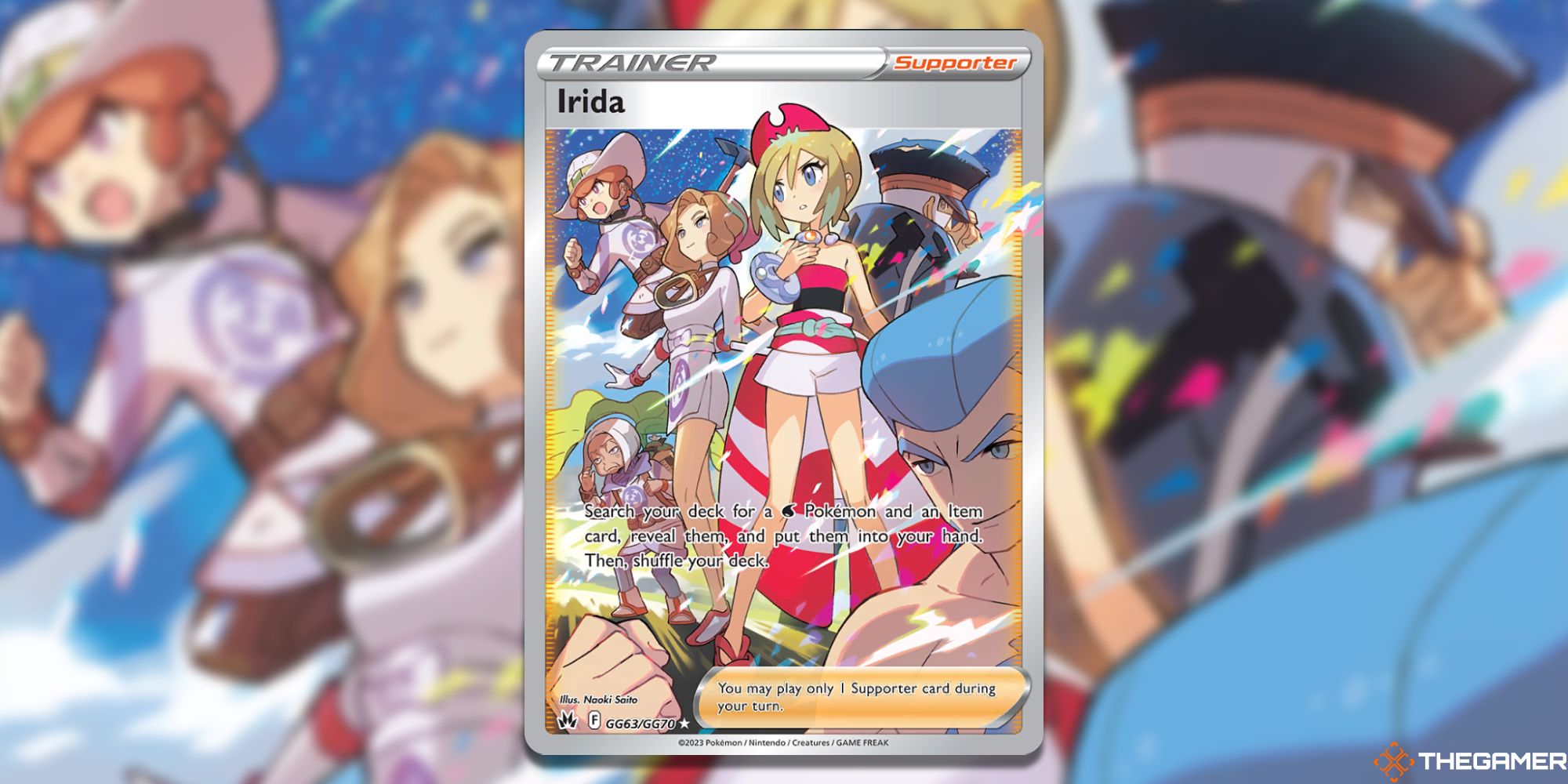 Irida can count itself as one of the best Trainer cards to come from Crown Zenith, and the Galarian Gallery ultra rare version is highly sought after because of that. Based on Irida of the Pearl Clan, this card provides pure card value. Letting you search your deck for a Water-type Pokemon and an Item card, putting both into your hand.

Iridia allows you to search your deck for a Water-type Pokemon and an Item card, putting both into your hand. Irida is a staple in any Water-based deck since you can grab basically any two cards you need in a given situation. 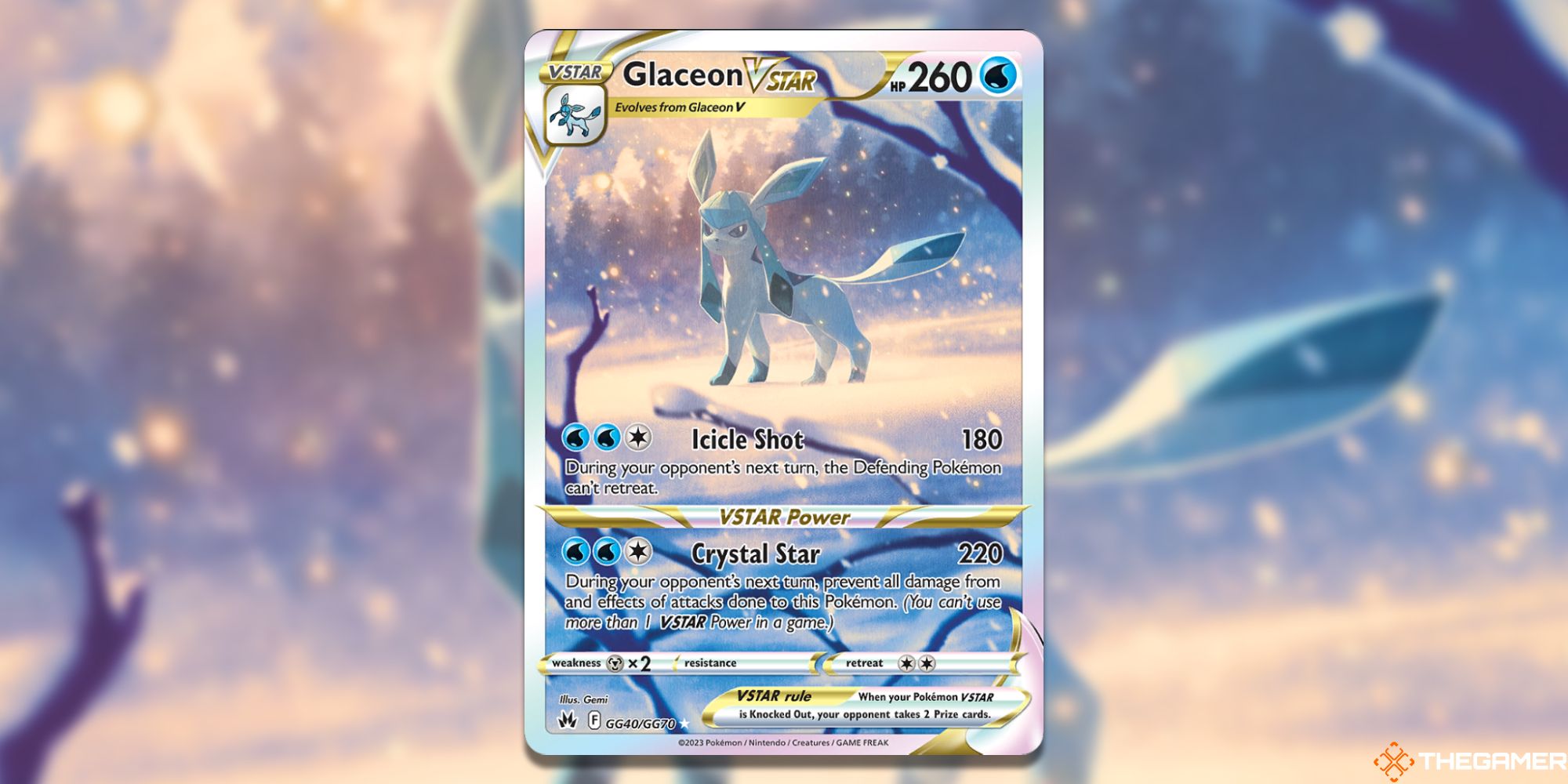 The Ice evolutionary line of Eevee has always been a popular one, and in Crown Zenith, the Galarian Gallery version of the card has plenty of collectability among fans. While Glaceon VSTAR doesn’t see much play competitively, it is a frigidly beautiful card that shows off a Glaceon in its natural environment. 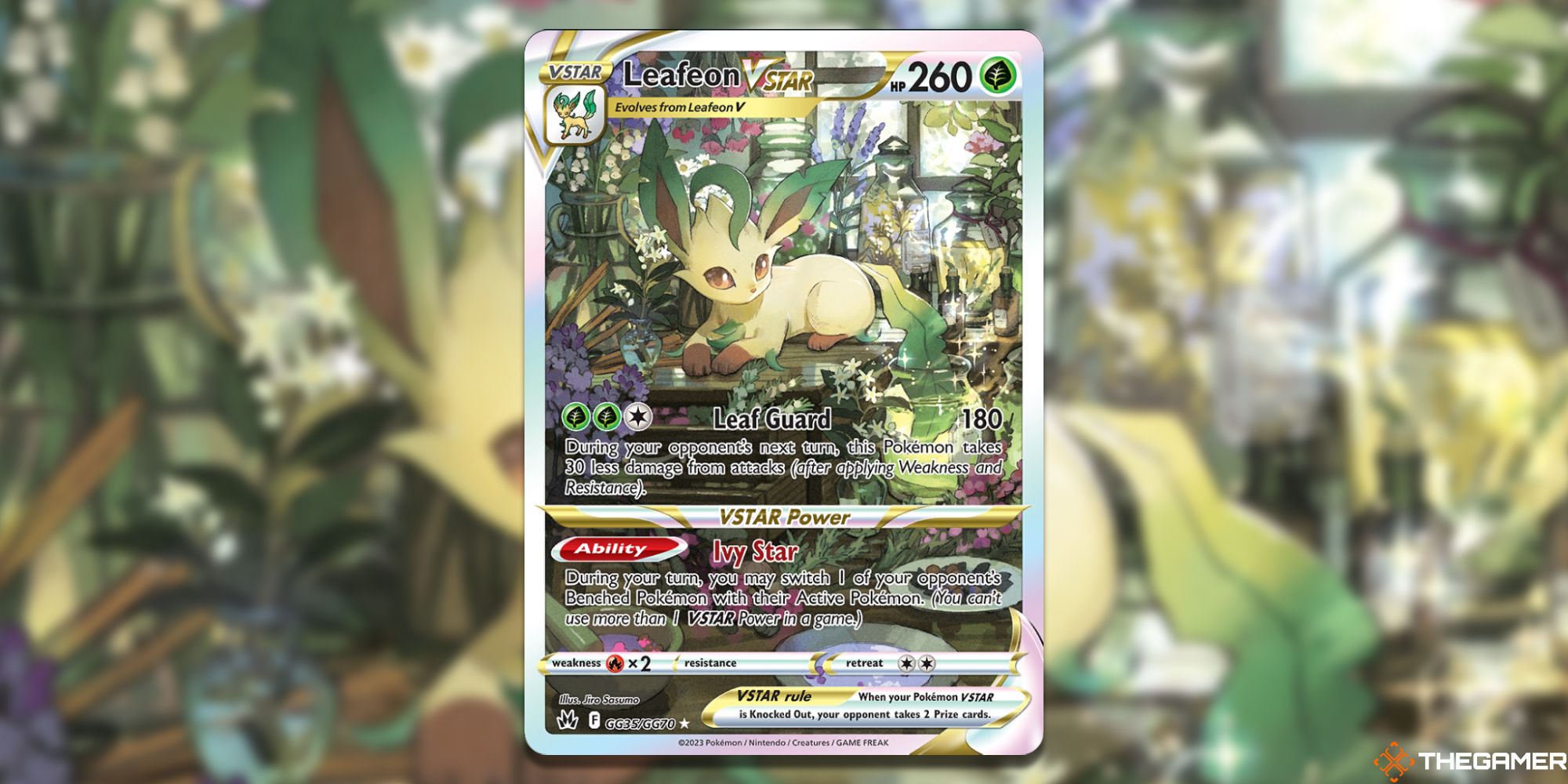 The second Eevee evolution on this list, Leafeon VSTAR, is another card that fetches a high value because of its positively lovely art. Casually lounging in a greenhouse or some type of apothecary, the beautiful art by Jiro Sasumo truly captures the daily life of this Leafeon. The card itself doesn’t see much play, but if you want to show off your favorite Eeveeloution, there’s no better card to pick. 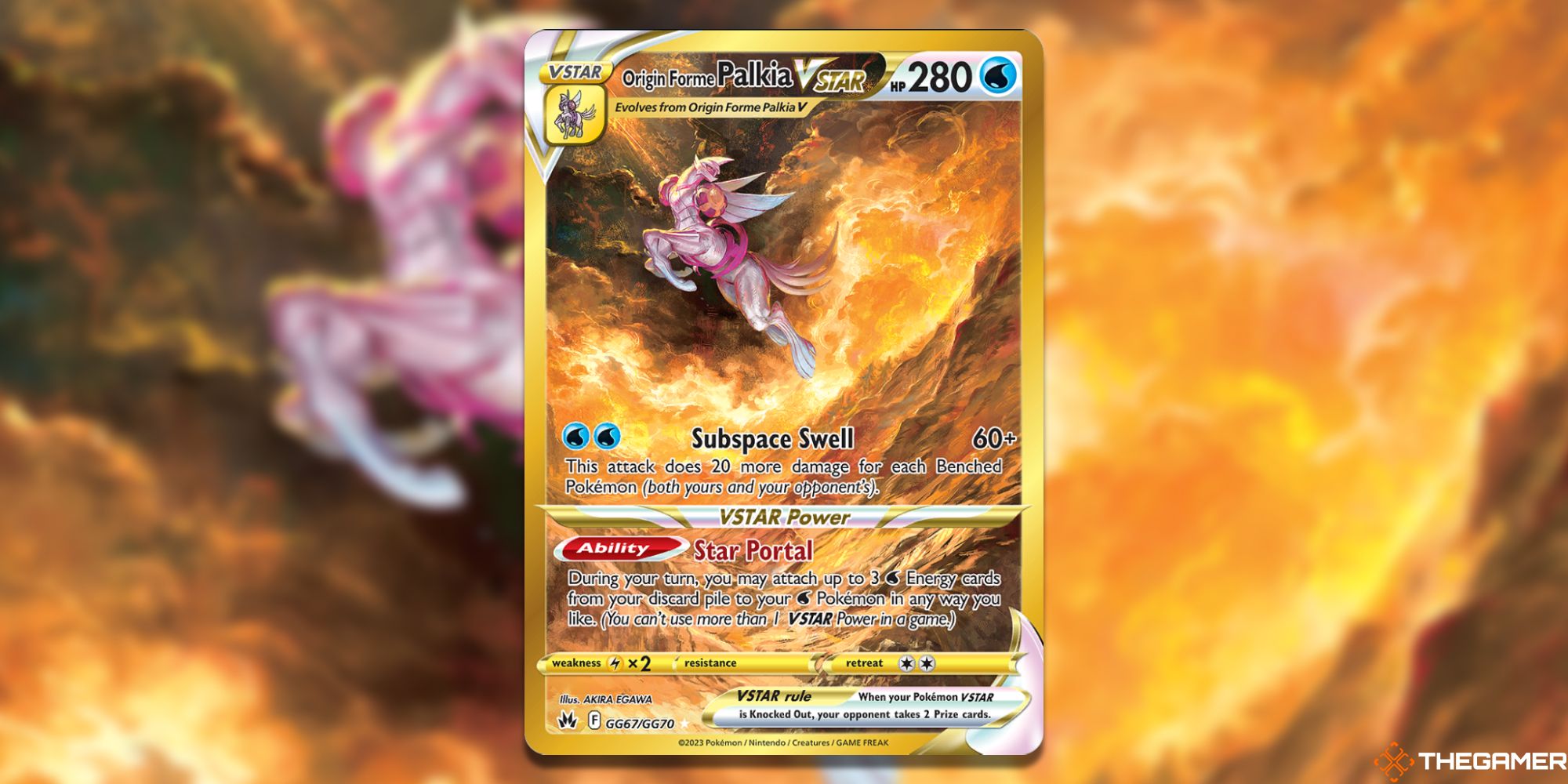 The secret rare version of Origin Forme Palkia VSTAR should surprise no one as being among the most valuable cards from Crown Zenith. Its only attack, Subspace Swell, can deal upwards of 260 damage if both players are maxed out on their Bench.

While the damage output will often be lower, you can easily achieve at least 160 damage by filling out your own Bench. When this secret rare is placed alongside the Origin Forme Dialga, Arceus, and Giratina VSTAR cards from Crown Zenith, it creates an almost cataclysmic union of art. 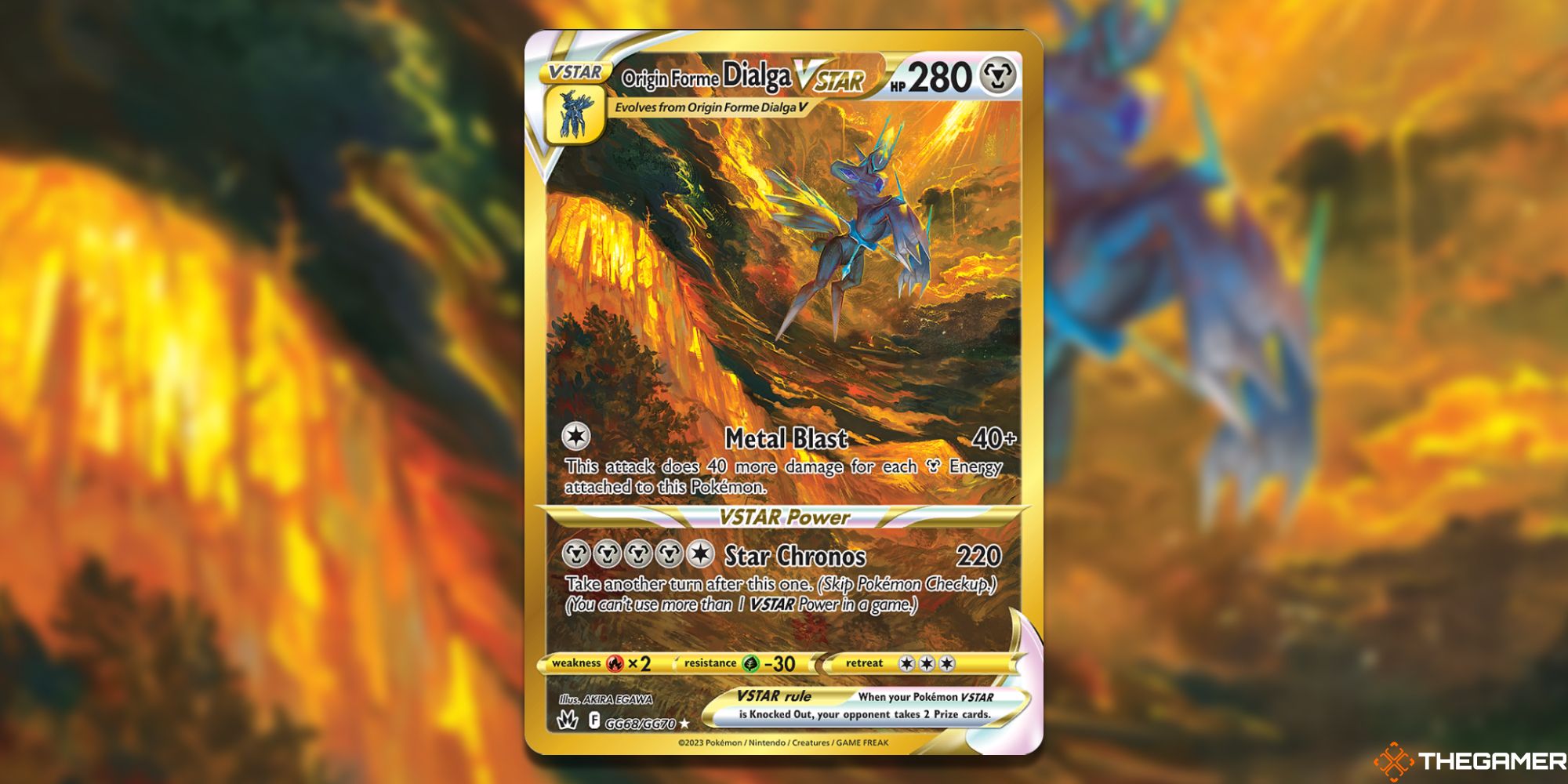 The anthesis of Palkia in nature but also united in cause, the Origin Forme Dialga VSTAR secret rare from Crown Zenith not only features similarly awe-inspiring art but an obscene amount of power. Its VSTAR Power, Star Chronos, grants you the extremely powerful ability to take an extra turn after your current one ends while also dealing a significant amount of damage. 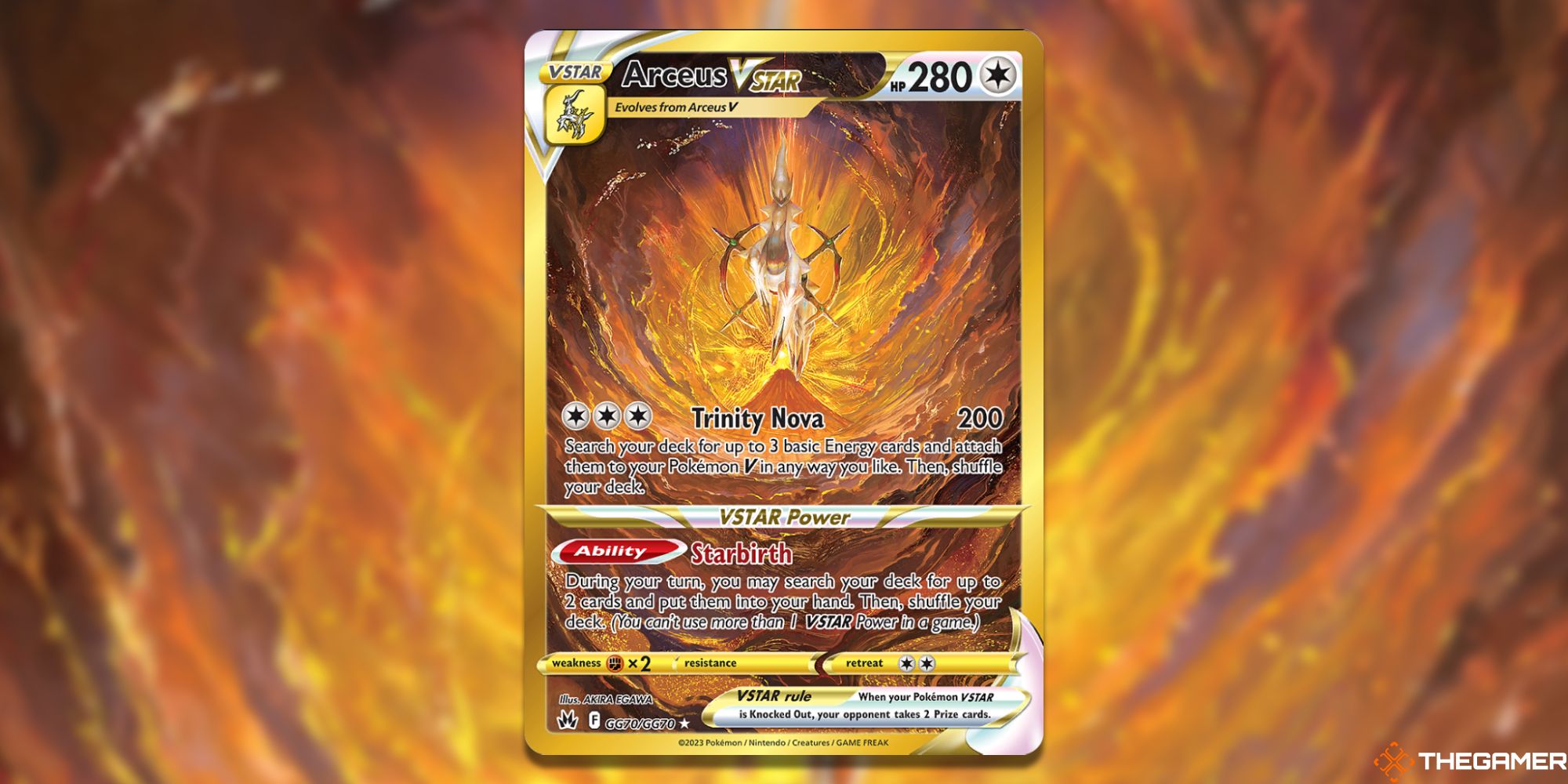 Among Pokemon lore, it is said that Arceus created not only the Sinnoh region but possibly the whole world, and with the art on this secret rare from the Galarian Gallery, it's hard to doubt its power. Arceus VSTAR is already a powerhouse in the trading card game; between its VSTAR Power to get any two cards from your deck and a powerful ability that accelerates your other V Pokemon, you can expect collectors and players alike to be after this card. 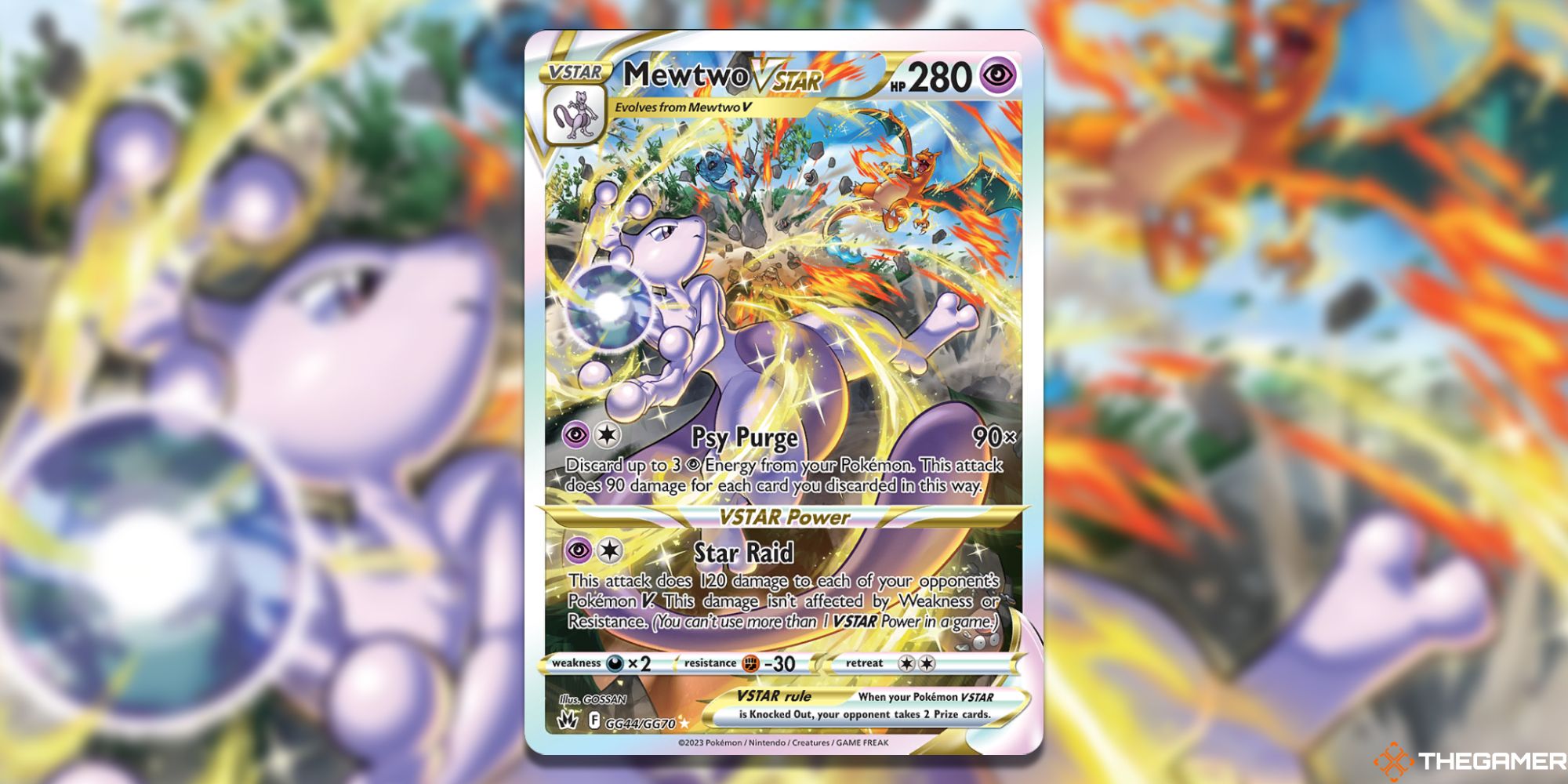 Depicting the original legendary Pokemon for many players, Mewtwo VSTAR sits above almost all other cards in Crown Zenith in terms of value. This full art card shows an intense fight between Mewtwo and a Charizard, tearing up the very earth beneath them as they battle in the skies. There’s a possibility that Mewtwo VSTAR’s price could be getting a boost from the tendency of cards with Charizard on it being of higher value, it's still safe to say that Mewtwo VSTAR will maintain a high price. 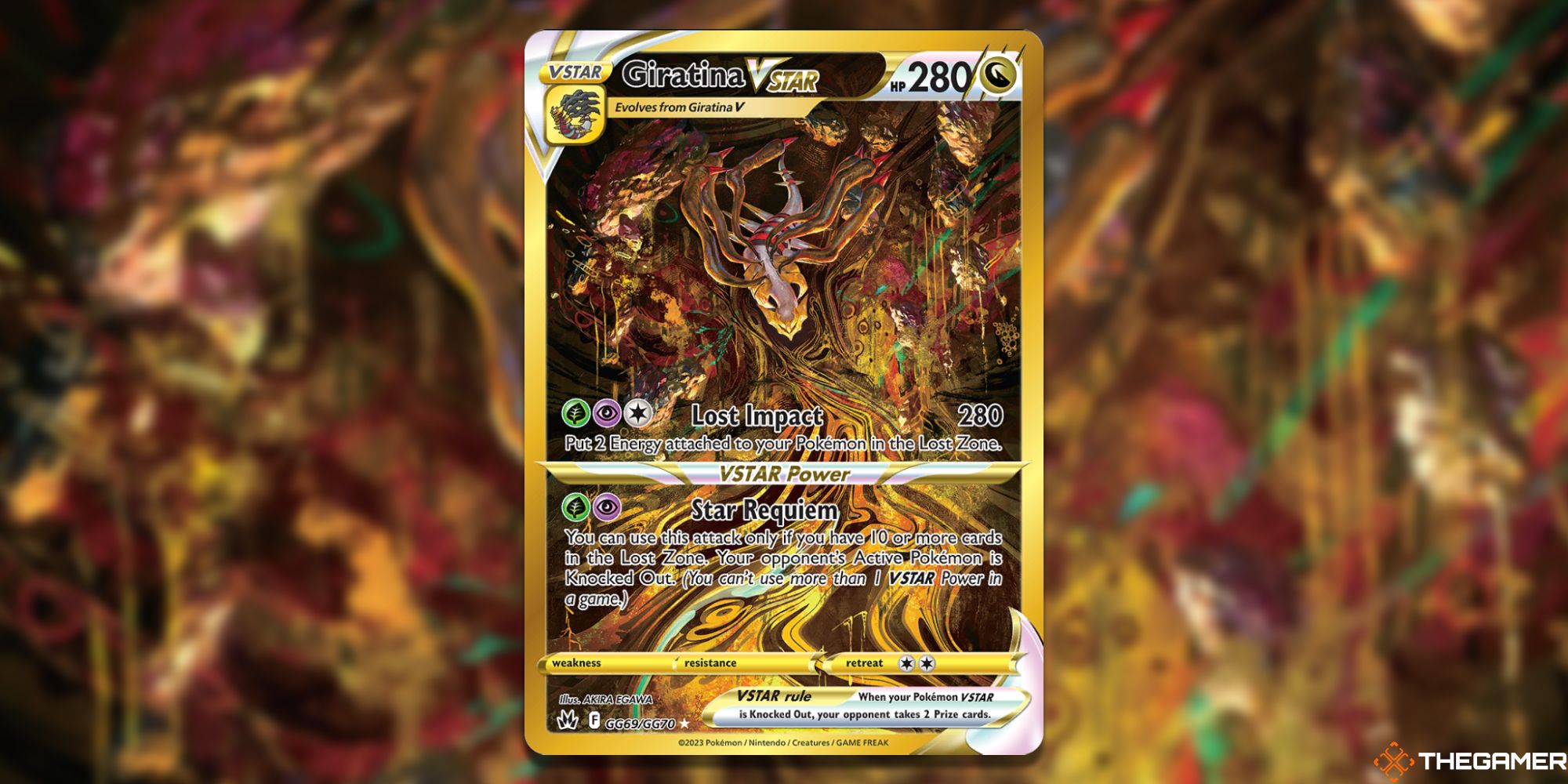 The most valuable card from Crown Zenith is Giratina VSTAR by a wide margin. Giratina, in its Origin Forme at its home in the Distortion World, can be seen parting the chaos of the world around it. Giratina’s high price comes from its eldritch-inspired art, rarity, and playability, headlining a powerful Lost Zone-based deck.