The Pokemon Trading Card Game is now well over two decades old, meaning that for many of us, it’s been a part of our lives from childhood through to adulthood. In that time there have been a truly ridiculous number of sets, bringing in new Pokemon, mechanics, and illustrators.

There’s something about those early sets though which have a charm that can never really be replicated. There've been numerous reprints of cards from the Base Set over the years, proving that players and collectors still love to look back on these relics of the nineties. Just one look at some of the cards below is enough to bring the memories of yesteryear flooding back. 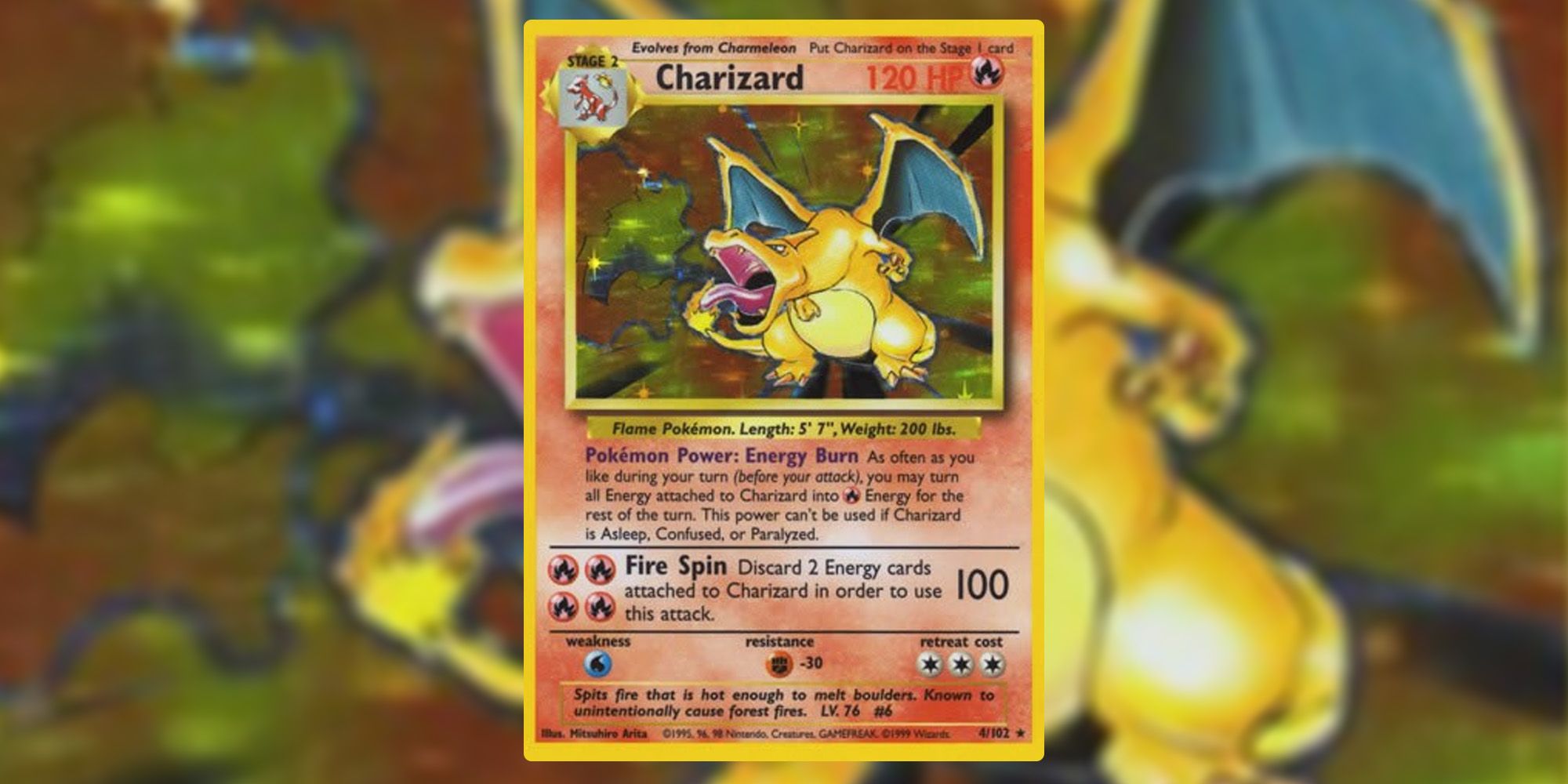 Let’s get this one out of the way first: having a Charizard made you the ruler of the playground. The fire dragon was already the most popular generation one starter Pokemon evolution, and Ash’s Charizard had become a fan favourite in the anime.

Charizard’s appearance in the TCG, however, catapulted the character to heights of popularity which have only ever been paralleled by Pikachu. While some cards in the early sets were pretty static, Charizard’s art made the character look powerful, and by extension, very rare. 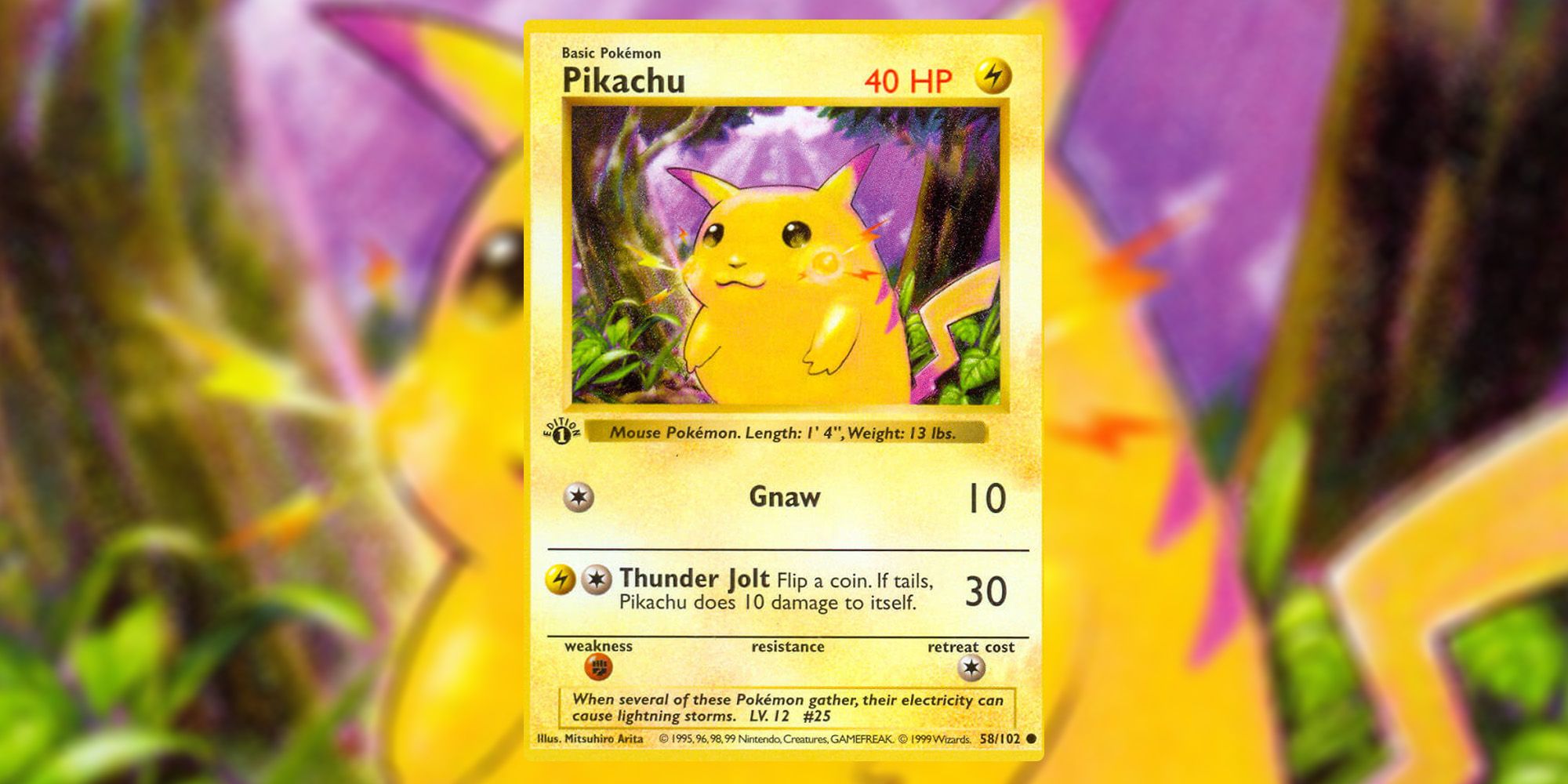 Speaking of the franchise’s iconic mascot, Pikachu was a far more common card, but, like Charizard, it had some of the best art in the Base Set (no surprise given that Mitsuhiro Arita was behind the art for both). The contrast of the purple and green forest scenery paired with the yellow card border and Pikachu really makes the card pop.

What makes this card so nostalgic is that it brings back so many other memories of Pikachu’s original, more… cuddly design. Younger Pokemon fans would barely recognise this as Pikachu, but for an entire generation, chonky Pikachu will always be the real icon. 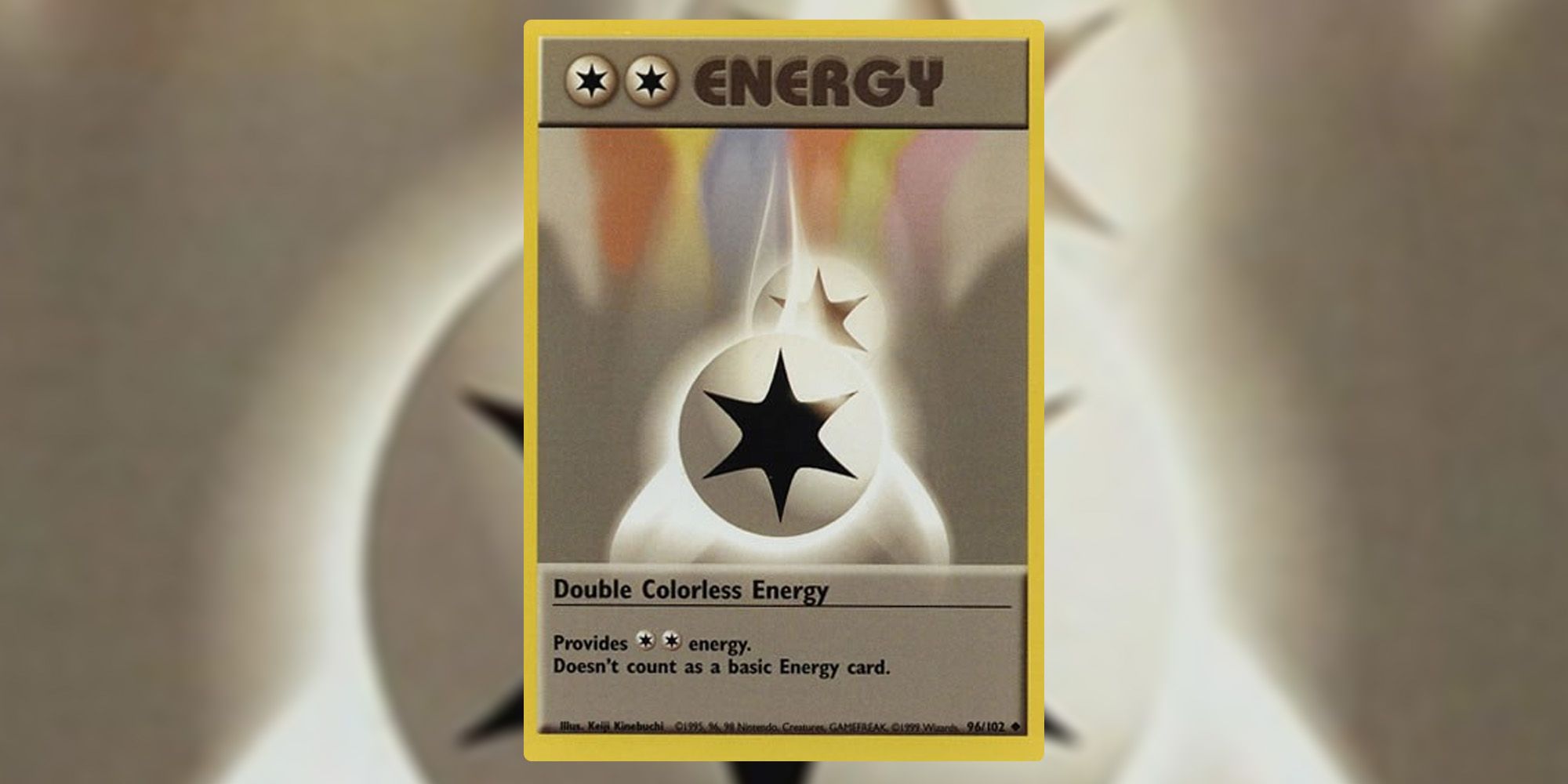 Here’s one which is memorable for all the wrong reasons. Imagine you’re 10 years old. Your pocket money is extremely limited and must be spent wisely. You’ve spent all week waiting to buy a single pack of Pokemon cards. Your hands tremble as you tear open the foil. With furious abandon, you riffle through the 11 cards within to find the rare.

And it’s a Double Colorless Energy. Your heart sinks as you contemplate for the first time in your life the cold, uncaring nature of this cruel, cruel world. 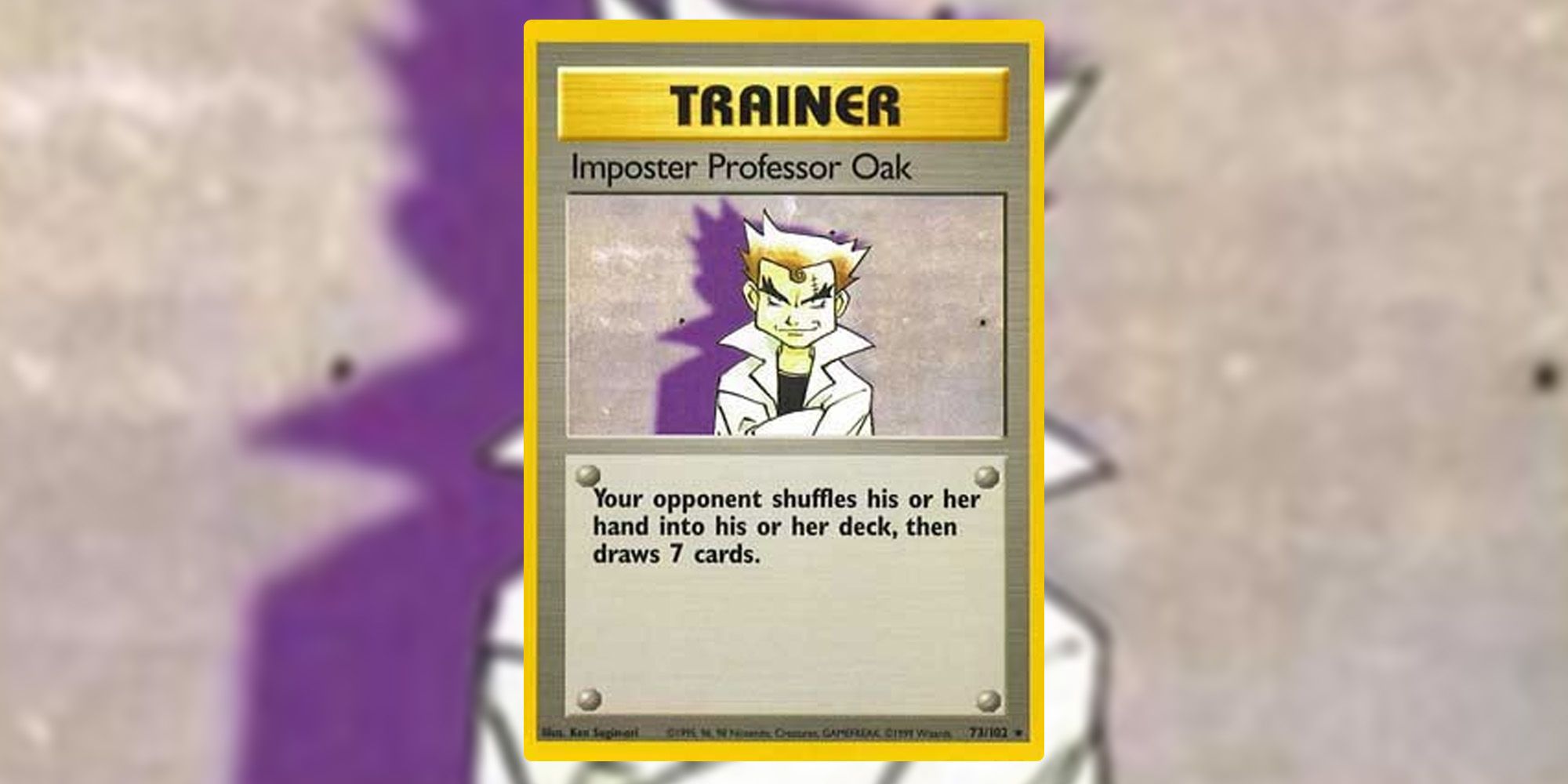 If a rare Energy was the worst card that you could have pulled as a fledgeling collector, then a rare Trainer couldn’t have been far behind. With 10 rare Trainer cards in the Base Set, the likelihood of pulling one of these was actually pretty high.

While most of them were useful for those who played the TCG, for a youngster just wanting a handful of cards to trade and show off, there wasn’t much in these to get excited about. Imposter Professor Oak was, however, the standout. Having appeared neither in the games nor the anime, there was an undeniable mystery about this shady version of the Prof. 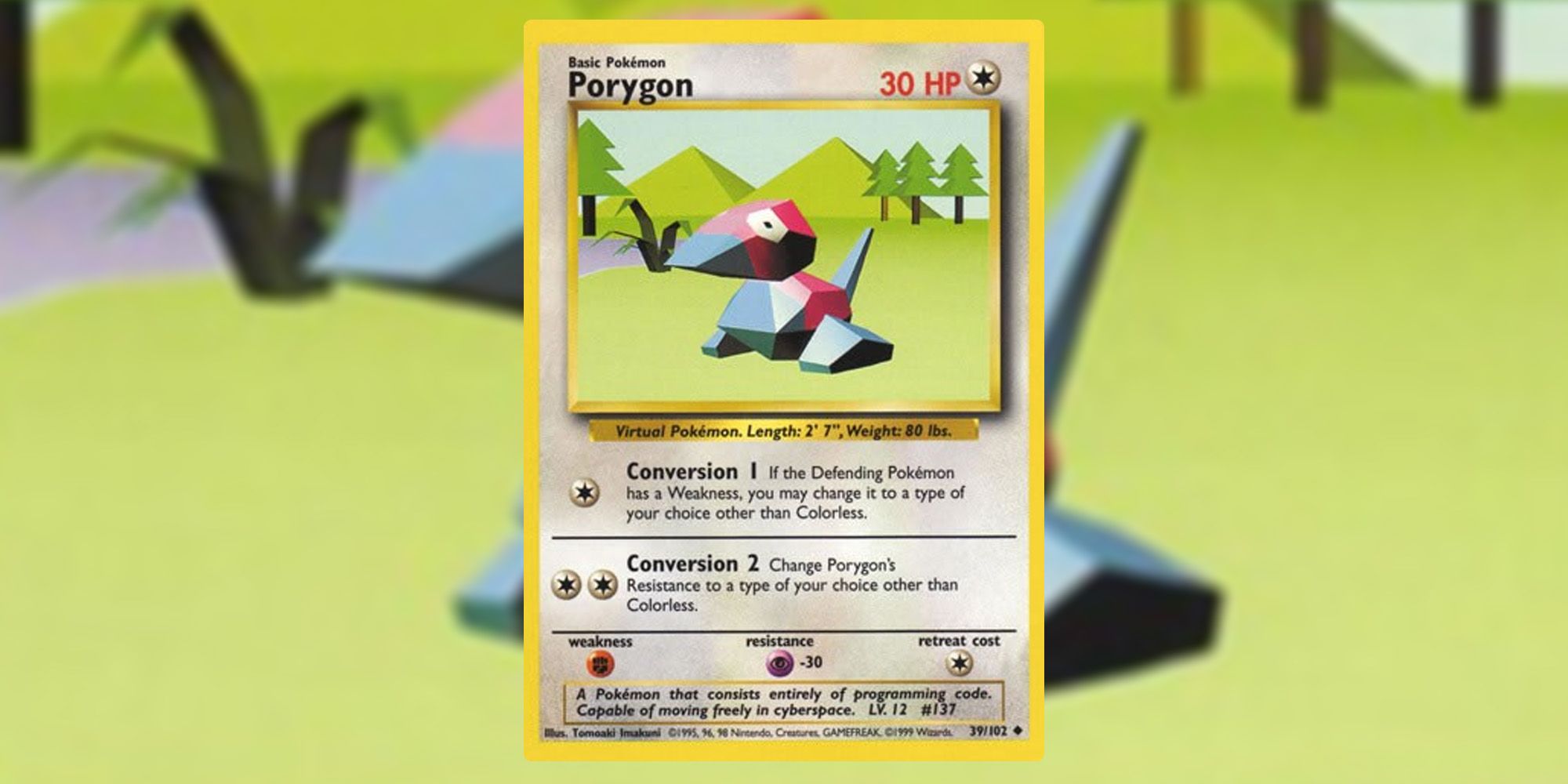 There has always been a striking contrast between cards which feature traditional illustration, and those which use 3D renders. While examples of CG art usage in the TCG have improved significantly in subsequent sets throughout the years, those in the earlier sets have a uniquely simplistic aesthetic.

There’s a kind of lo-fi, faintly vaporwave charm to these cards now – a look which suits no Pokemon more than it does Porygon. His thousand-yard stare only hints at the horrors he had unleashed upon an unsuspecting Japanese audience in his anime debut. 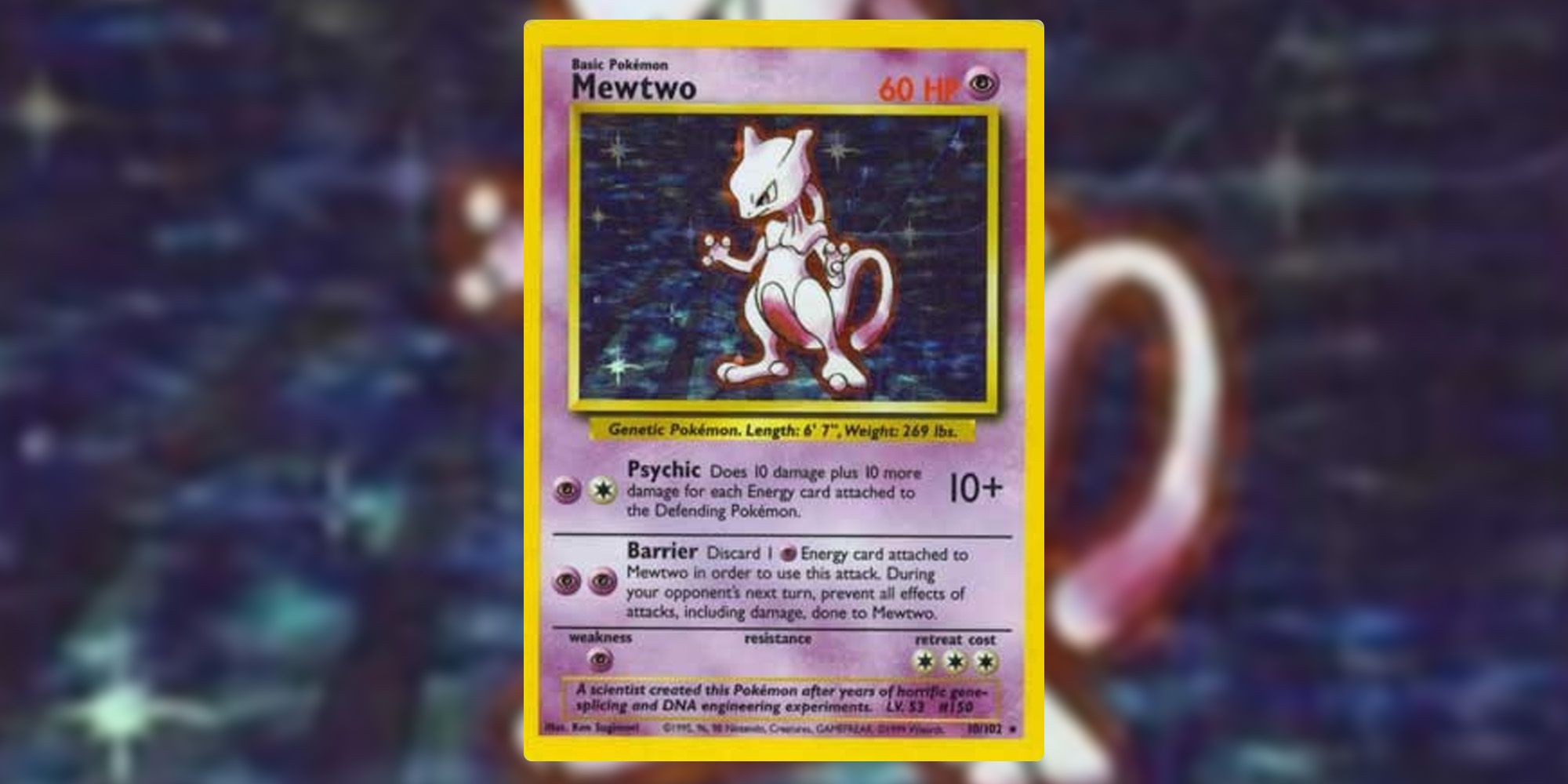 Mewtwo’s legendary status was about the only thing going for its first appearance in the TCG. The card art is standard Ken Sugimori fare, it’s not particularly powerful (only 60HP?!), and its rarity was undermined by its inclusion in the Zap! theme deck.

Still, Mewtwo is Mewtwo, and there was something undeniably special about pulling one of these holos from a booster pack. Only one other legendary Pokemon, Zapdos, was included in the Base Set. Meanwhile Mew wouldn’t be available outside of promos until 2002’s Expedition set. 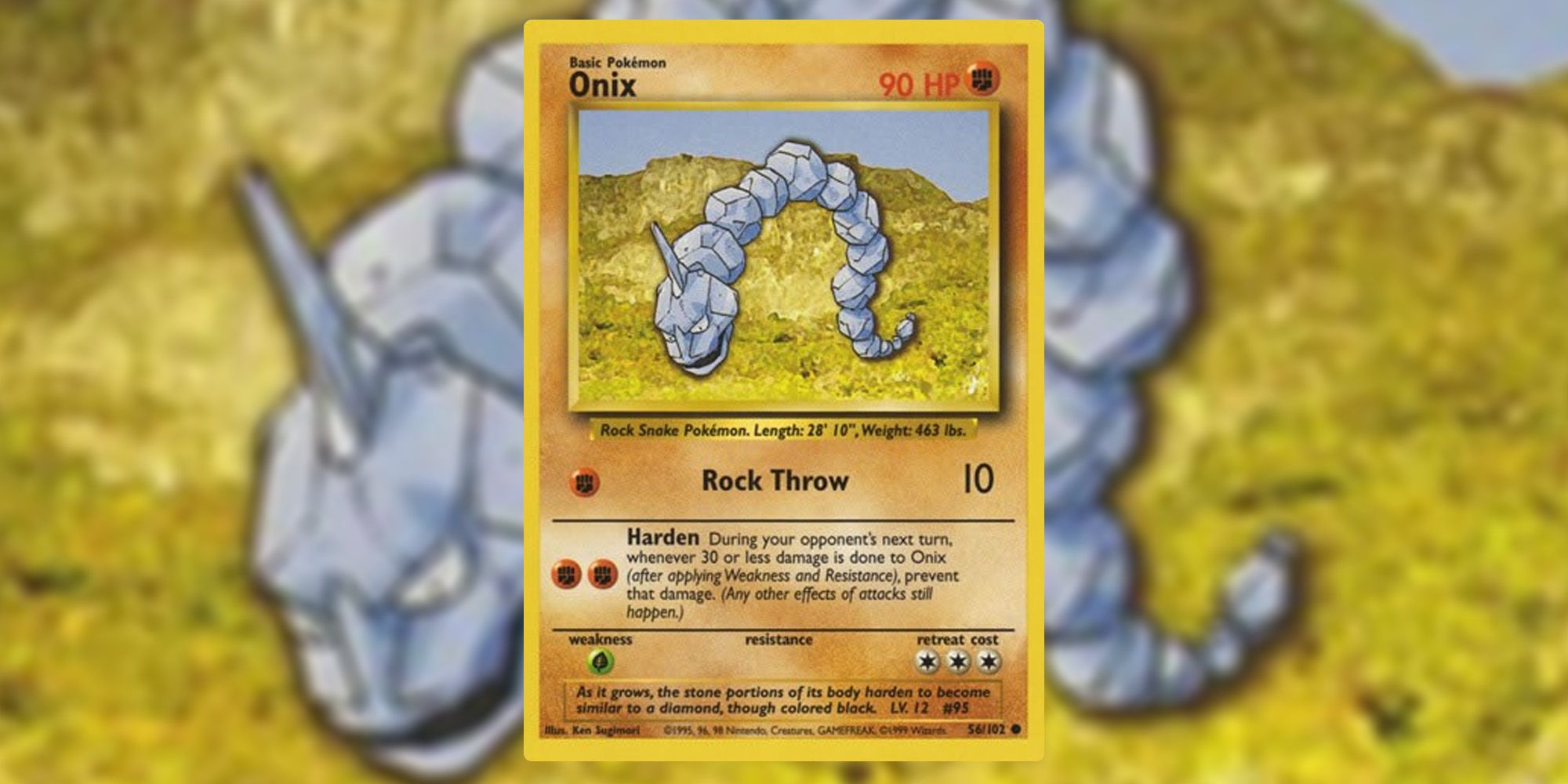 As Brock’s lead Pokemon in the original games, Onix is one of the most powerful Pokemon that you encounter early in the game. Meanwhile, the anime gave viewers a sense of Onix’s sheer size. Even though it’s not a rare Pokemon, it feels unlikely that you’d find Onix’s in abundance throughout the Pokemon world.

In the Base Set of the TCG however, Onix is inexplicably a Common card. This wasn’t the only instance of a head-scratching rarity classification in the set, with Arcanine (uncommon), and Starmie (common), being other standouts. 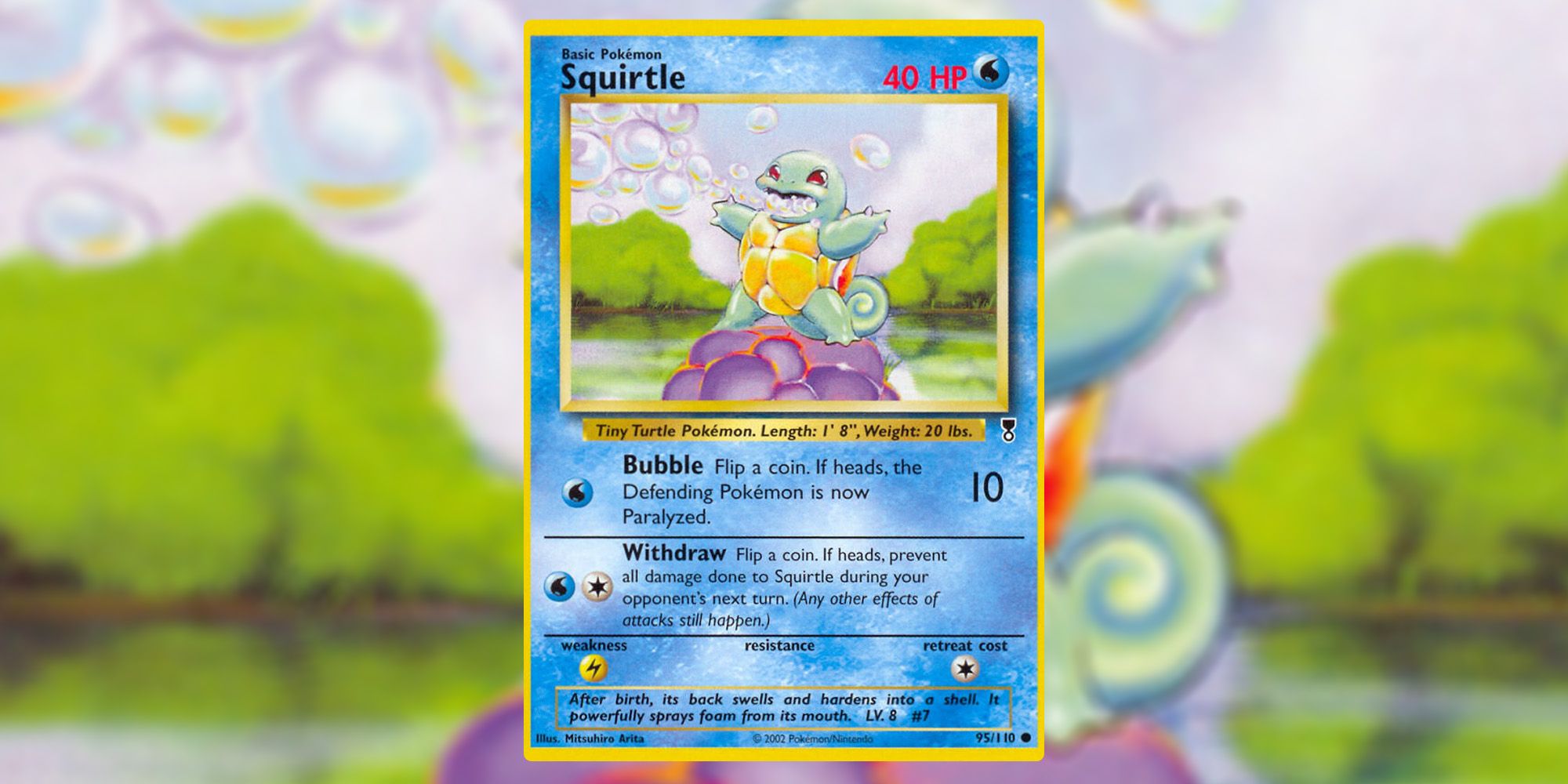 As with his Pikachu card, Arita did a great job of creating memorable art of the three starter Pokemon in their natural habitats. Bulbasaur looks fantastically dynamic firing Leech Seed, and Charmander looks irresistibly adorable using his tail to set a patch of grass aflame.

For sheer memorability, however, Squirtle and his “come at me bro” pose trumps them all. It’s hard not to subconsciously link the art on these cards to their early appearances in the anime, and Arita’s Squirtle certainly looks as though he’s only a pair of shades away from becoming a member of the Squirtle Squad. 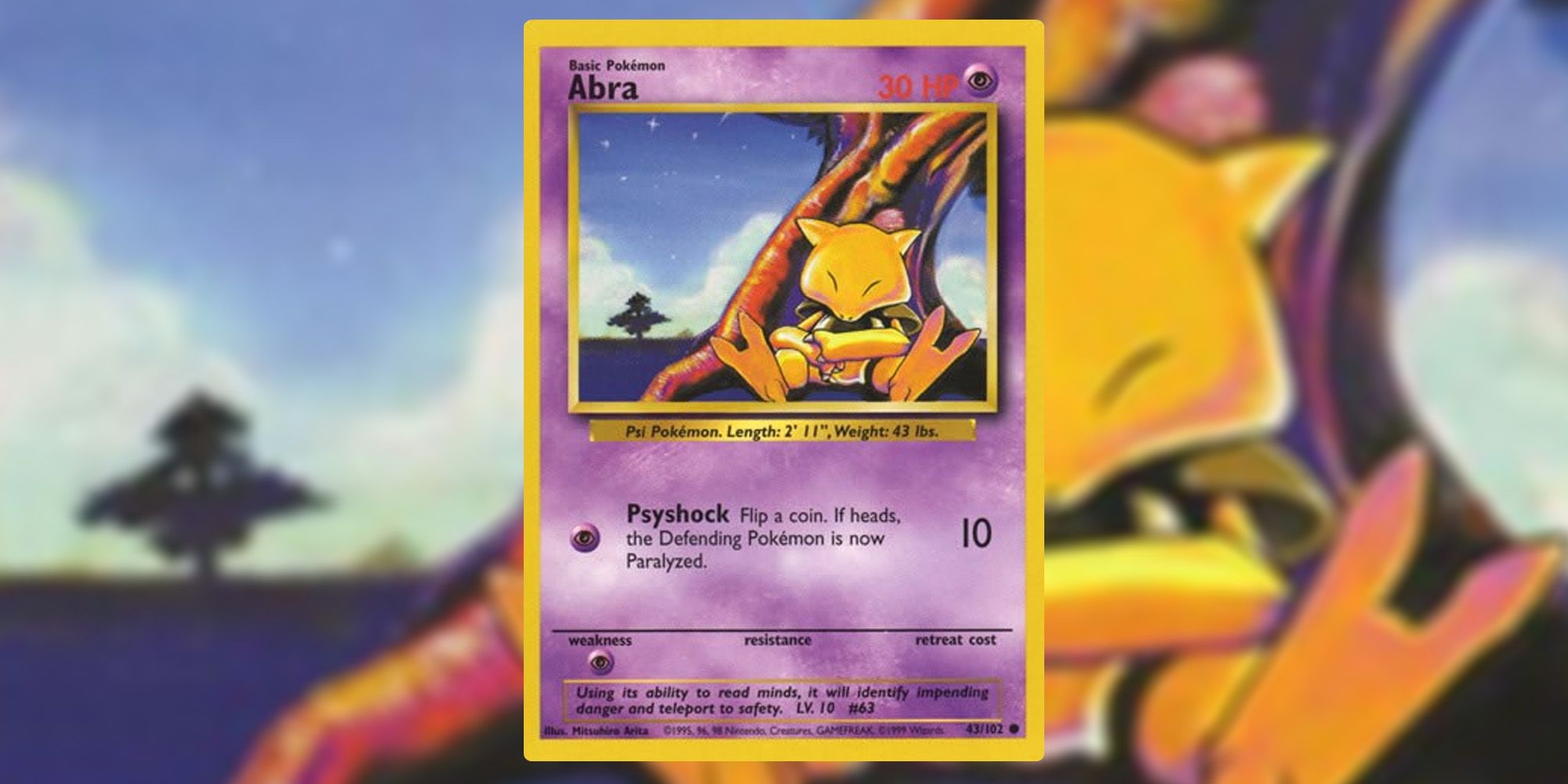 On the surface, there’s little that is particularly standout about this card. It’s a Common, with low HP and a standard attack (Teleport would’ve made much more sense than Psyshock). Thanks to that whole business with Uri Geller, it’s his Stage 1 evolution’s card which has gotten all the attention over the years.

Mitsuhiro Arita’s art, however, is a whole vibe. It’s incredible how much character the artist manages to convey through such a simple composition. Everything from the contrasting yellow and purples, to the peaceful, dusky sky is a thing of pure nostalgia evoking beauty. 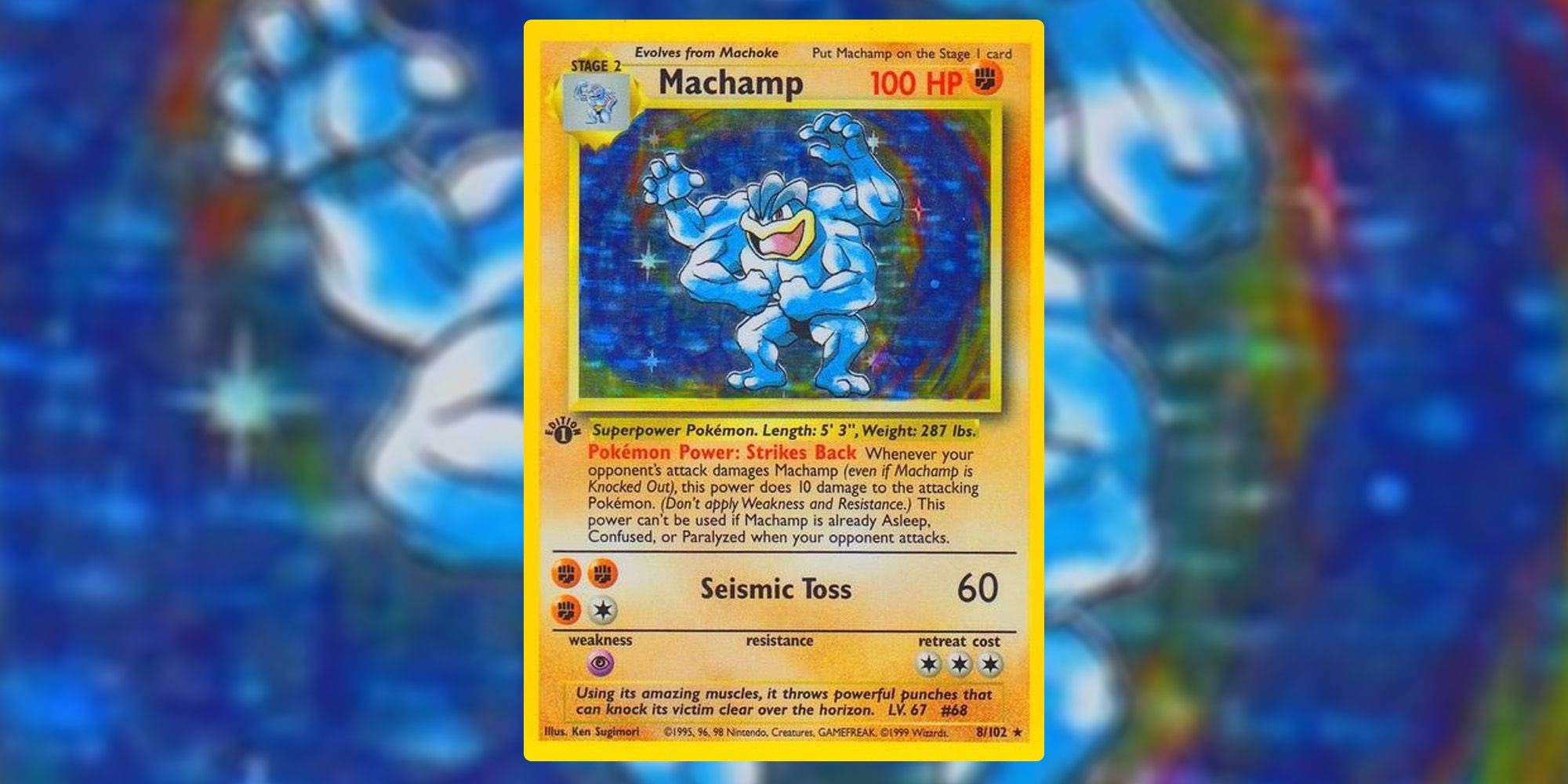 For so many players and collectors, the original ‘2-Player Starter Set’ was the gateway to a hobby which would last for decades to come. At the height of Pokemania, almost everybody had one of these Starter decks, even if they had no intention of buying the boosters and becoming a collector.

As an intended introduction to the game, you might’ve assumed that either Pikachu or one of the starter trio would be at the core of this deck. Instead, for reasons unknown, Machop’s evolutionary line was given the spotlight. As such, Machamp became the most recognizable card in the game, kickstarting a fascination for shiny cards which endures to this day.