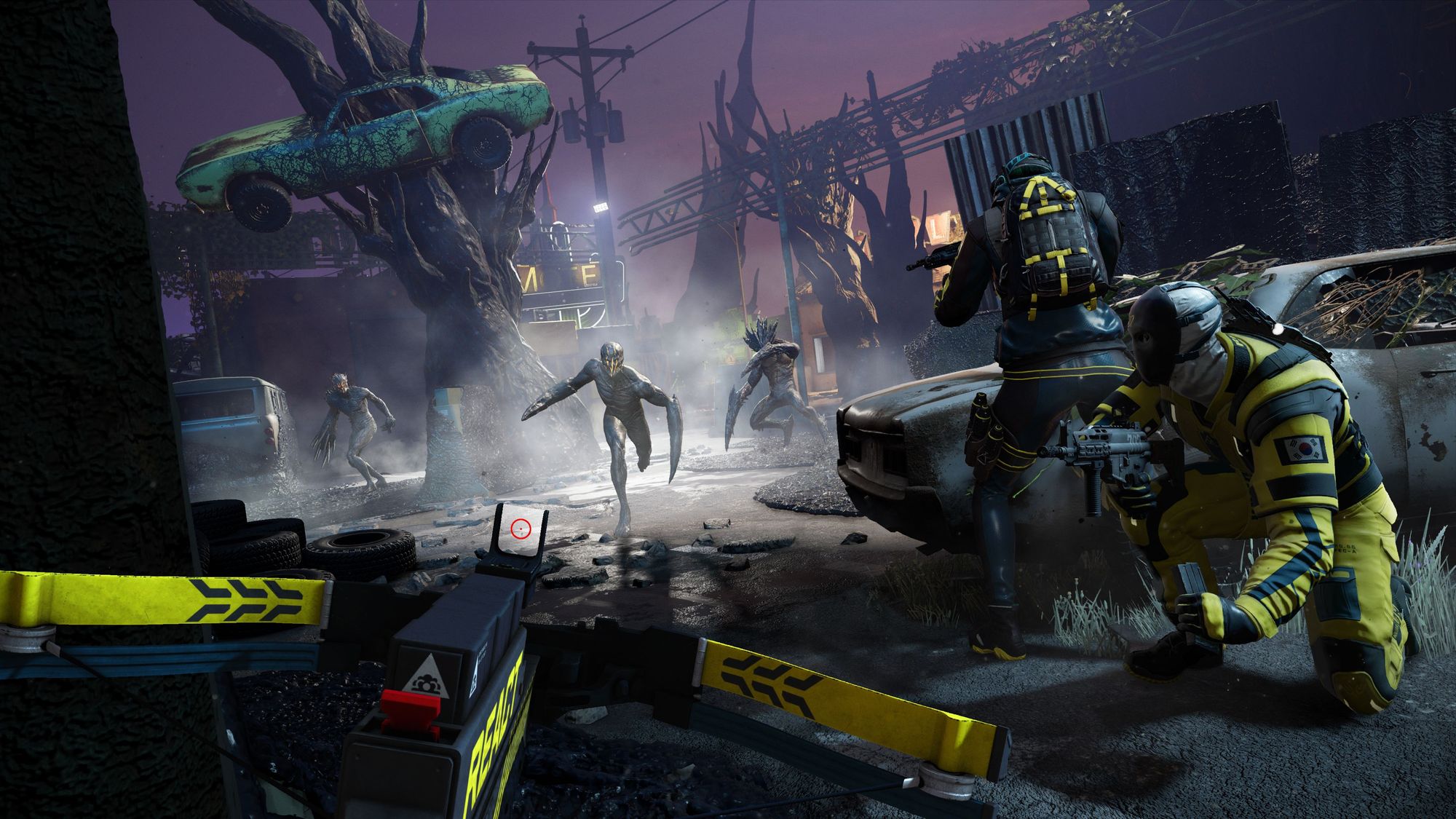 The first new Rainbow Six game in over six years focuses on co-op and fighting aliens, but it still has plenty in common with Siege.

Ubisoft’s Rainbow Six franchise has seen a lot of change since the first game was released in 1998. It started off as a slow-paced tactical shooter, where you had to plan out your missions on a map before even getting your finger on a trigger, but has slowly segued into more action-orientated territory. Extraction is the first major Rainbow Six iteration since 2015’s Siege and while the basics are similar the alien adversaries are not.

Whereas Siege put Rainbow Six on the map as an esport, pitching teams of five human players against each other, Extraction is a three-player co-operative game that has more in common with the likes of Back 4 Blood and Aliens: Fireteam Elite. The aliens in Extraction are called the Archaeans and they come in various forms which approximate the sorts of enemies usually found in a zombie game.

Rainbow Six Extraction’s premise is built on the sudden arrival of the Archaeans via a space probe, which crash lands in a remote US town, before they spread underground and drive up tendrils through buildings in various American cities, creating no-go areas. The Rainbow team – renamed REACT – is sent in to both clear areas of Archaeans and gather the intel and biological samples required to work out how to get rid of them on a more permanent basis.

In gameplay terms, this manifests itself as an extensive array of three-stage missions. Every map you’re sent into is divided into three sub-zones, with airlocks between them; each sub-zone has a specific objective, and if things are going badly for you and your team at any point, you can call for helicopter extraction. That means you don’t necessarily have to fulfil all three objectives, although you are rewarded handsomely for doing so, via the experience points that level up your individual operators as well as your overall REACT milestone progress.

Hitting REACT milestones opens up new areas: you start off in New York, before heading to San Francisco, Alaska, and Truth Or Consequences – the tiny backwoods town where the Archaean infestation started. Every time you level up, you get tokens to spend on REACT tech, such as different types of grenades and explosives, defensive equipment including body armour and health boosters, and a REACT laser which zaps the so-called sprawl: grey gunk with which the Archaeans coat floors and walls, that slows your operators down.

As with many aspects of Extraction, the REACT tech will feel familiar to those who played Rainbow Six Siege, but it has been tweaked in a manner that makes sense given you’re now facing an alien threat. The same applies to the operators themselves: all 18 have been drafted in from Siege, but their individual abilities have been fiddled around with to make them more suited to fighting Archaeans.

Rainbow Six Extraction works hard to ensure that you will play as all the operators, and not just stick with one. They level up individually, and according to how you play, quite a few tend to be unavailable at any given moment. It’s pretty much mandatory for you to get them all up to the level cap of 10 before jumping into the endgame (the main element of which, Maelstrom Protocol, unlocks when you hit REACT milestone 16).

Extraction’s lore ensures that the objectives you’re given in each level are wide-ranging and varied, sidestepping a widespread criticism of such live service games: that after a short while, it feels like you’re doing the same thing over and over again.

In Extraction, you might have to plant trackers in dormant nests (big red protuberances that normally spawn Archaeans); attract an Elite Archaean by killing grunts, then get it to follow you back to a trap; plant explosives on various spines, then defend them from onslaughts of Archaeans; stealth kill Elites in order to sample their DNA; or rescue VIPs who have been captured by Archaeans.

If you die during a mission (you can be revived once by a squad-mate), you will be encased in protective foam and that operator will be designated as MIA. Then, the next time you go to that map, you’ll have to rescue that operator from a tree-like Archaean structure that attaches nodes to walls and ceilings, which must be shot when they open up. MIA is a fun, puzzly objective, but also adds a sense that you’re creating your own storyline, and you’ll soon find yourself becoming obsessed with ensuring that all your operators are available and operational.

Another aspect of MIA objectives which is illustrative of Rainbow Six Extraction as a whole, is that they are nigh-on impossible to achieve if you attempt to play missions either solo or with just one other squad-mate. Both options are open to you, and the game attempts to scale down the overall threat-level accordingly, but it doesn’t really succeed.

Rainbow Six Extraction, in other words, is firmly a three-player co-op game and given the complex tactics involved there’s no option for computer-controlled squad-mates. Playing solo or in a two-man squad is an area which clearly could do with some rebalancing, but it’s doubtful Ubisoft will be bothered to do so – it’s very easy to jump into a session with two other random players and just as simple to form a squad with two of your mates.

To that end, Ubisoft will supply everyone who buys the game with Buddy Passes that let two people play for free, but expire after 14 days. Given that Extraction is also on Microsoft’s Game Pass, and supports cross-play between all types of consoles and the PC, it’s pretty well sorted on the try-before-you-buy front.

Once you do try it, there’s every likelihood that it won’t take long before you’re hooked. Despite the fact that Siege is primarily player versus player (PvP) and Extraction is player versus environment (PvE), the mechanics of the two games feel reassuringly similar, with familiar operators, similar levels of destructible scenery, and more or less the same weaponry and creamy smooth control system.

Most importantly, as in Siege, you’ll get absolutely nowhere unless you employ a carefully worked out tactical approach. Recon is vitally important – as in Siege, your operators have wheeled drones – and merely charging gung-ho straight into your objective will usually breed disaster. Often, an element of stealth is required (especially when rescuing VIPs) and it’s always a good idea to first eliminate all nests and prowling Archaeans in the vicinity of an objective.

Rainbow Six games have always been about playing in a tactical manner, and Extraction nails that requirement in an enjoyable and satisfying manner. One key factor in that is the Archaeans themselves, which prove to be a formidable enemy: they are very sensitive to noise and, from the outset, the AI that controls them gives you zero respite.

Archaeans also mutate, which is a factor that looks set to feed into a pretty comprehensive set of endgame activities that Ubisoft has planned. Two are available at launch: Maelstrom Protocol and Assignments. The former offers a more hardcore version of the main game, restricting you to playing with a specific pool of operators which changes every week (you’ll need at least three of the operators on the list in order to jump in). Assignments, meanwhile, are specific missions that will be available for just one week at a time.

Post-launch, Extraction’s endgame will acquire some other modes, notably Wall-To-Wall, which is effectively a Horde mode, and Kick The Anthill, which involves intense bursts in which you eliminate pockets of Archaeans which have been barricaded into specific areas, and must be dealt with as quickly as possible. A Veteran mode is aimed at lone-wolf players who reckon they can cope with a cut-sown HUD and restricted ammo, and Crisis Events will see Archaeans mutate so they offer entirely new threats.

As ever with a live service game, there will undoubtedly be periods when tweaks and rebalancing come into play, and it remains to be seen whether Extraction will hit a similar sort of nerve to Siege. But even at launch, Rainbow Six Extraction feels impressively polished and fettled, while managing to do justice to the Rainbow Six franchise’s much-loved DNA. It’s challenging and absorbing, yet markedly less intimidating than Siege. The visuals may make it seem a little generic at first but anyone who loves team-based, tactical shooters should find plenty to enjoy.

In Short: An absorbing, tactical three-person co-op game that does well to expand the Rainbow Six gameplay into a more fantastical setting.

Pros: Varied objectives and appropriately tactical gameplay stays true to the Rainbow Six DNA. Lots of content and a busy endgame with much more to come.