So you've managed to acquire a job, that was fast! The problem? It's as the swabbie onboard LeChuck's ship of the damned – Return to Monkey Island really throws you headfirst into danger, doesn't it?

This game's second act has you confined to LeChuck's ship, and it's up to you to find a way to overhaul their plan, keep your identity secret, and ingratiate yourself with your new coworkers. It might be tough, especially since LeChuck himself is aboard – but don't worry, with our help, this act's puzzles will fall before your eyes.

How To Get Out Of The Hold 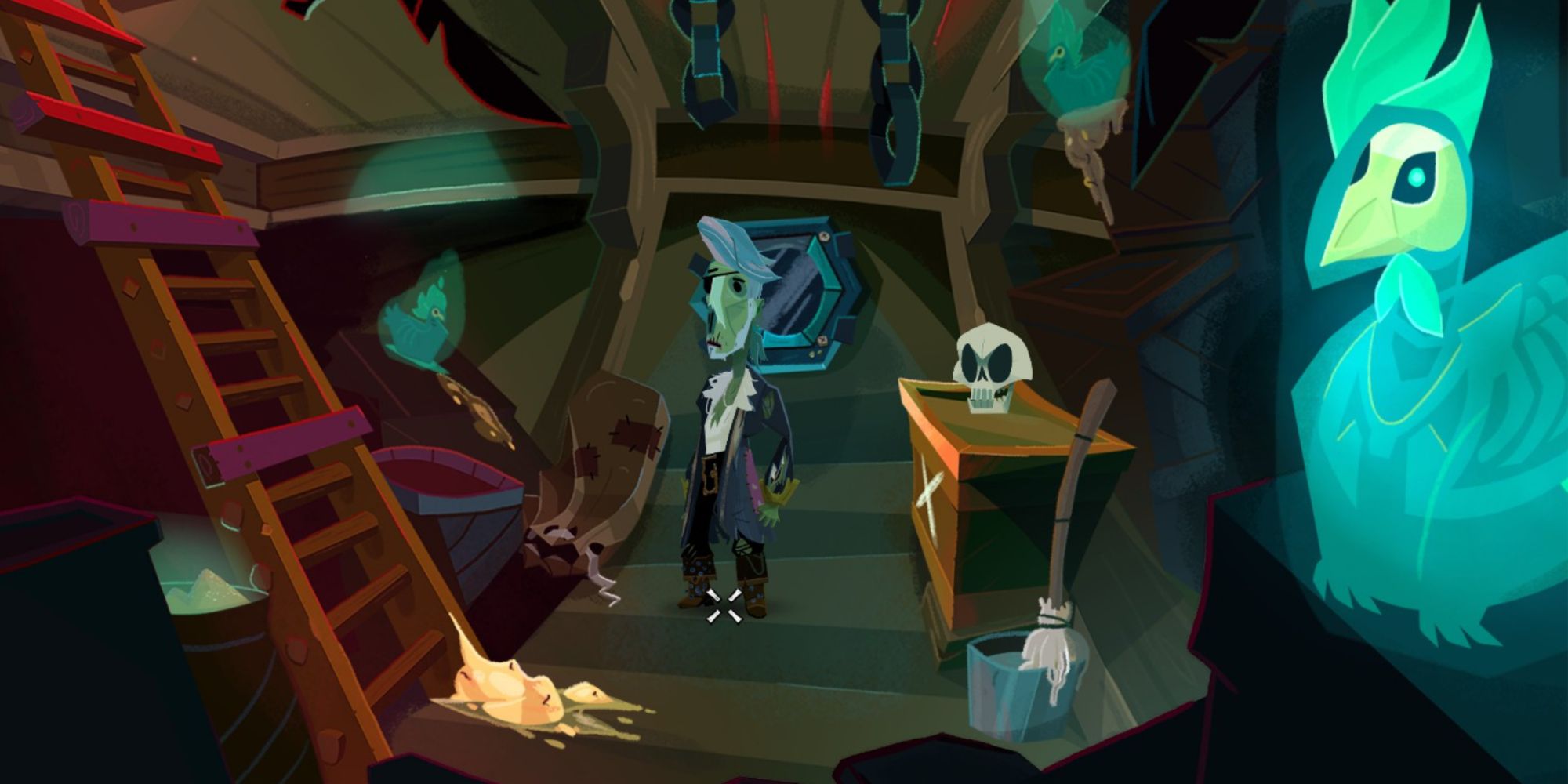 Take a look at your surroundings, examining the chickens and objects around you. Open up the crate and meet Murray, the iconic talking skull of games past. He will reveal to you that he is the spy onboard LeChuck's ship for Captain Madison back in Mêlée.

Pick up the pamphlet, a handful of chicken feed from the bin on the left, and finally, your mop on the right. Swab up the pile of grease at the bottom of the ladder, and it will deftly get replaced with a new one. With the greasy mop in hand, swab the three screws in the porthole on the far wall.

Now that the screws are greased, you'll be able to remove them using the ceremonial knife. Once all three screws are out, the porthole will fall off. Trying to escape now will prompt Guybrush to say it's too tight to get through, so pick up the mop again and transfer some grease from the floor to the porthole. Do this a total of three times to get the porthole sufficiently greasy.

On Casual Mode, you only have to swab the already-open porthole. There are no screws to unscrew. 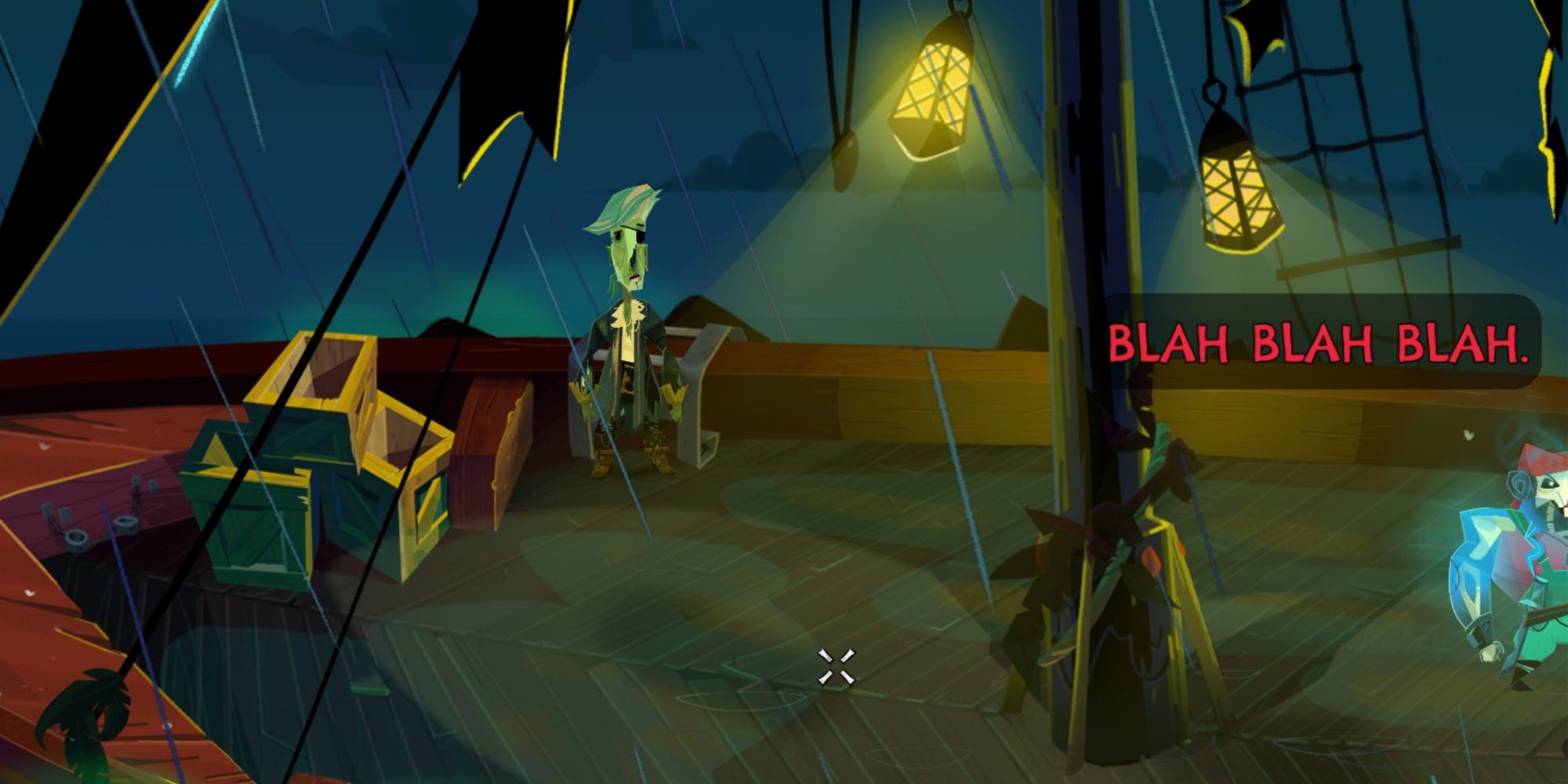 Sidle along to the right of the ship and use the rope ladder to climb over the ship's railing. Walk to the right to come face to face with LeChuck and the rest of his undead crew. He reveals that he has the map to the Secret of Monkey Island and that he will be keeping it locked away in his cabin. He will also task you with obtaining a flattened skull.

How To Obtain A Flattened Skull 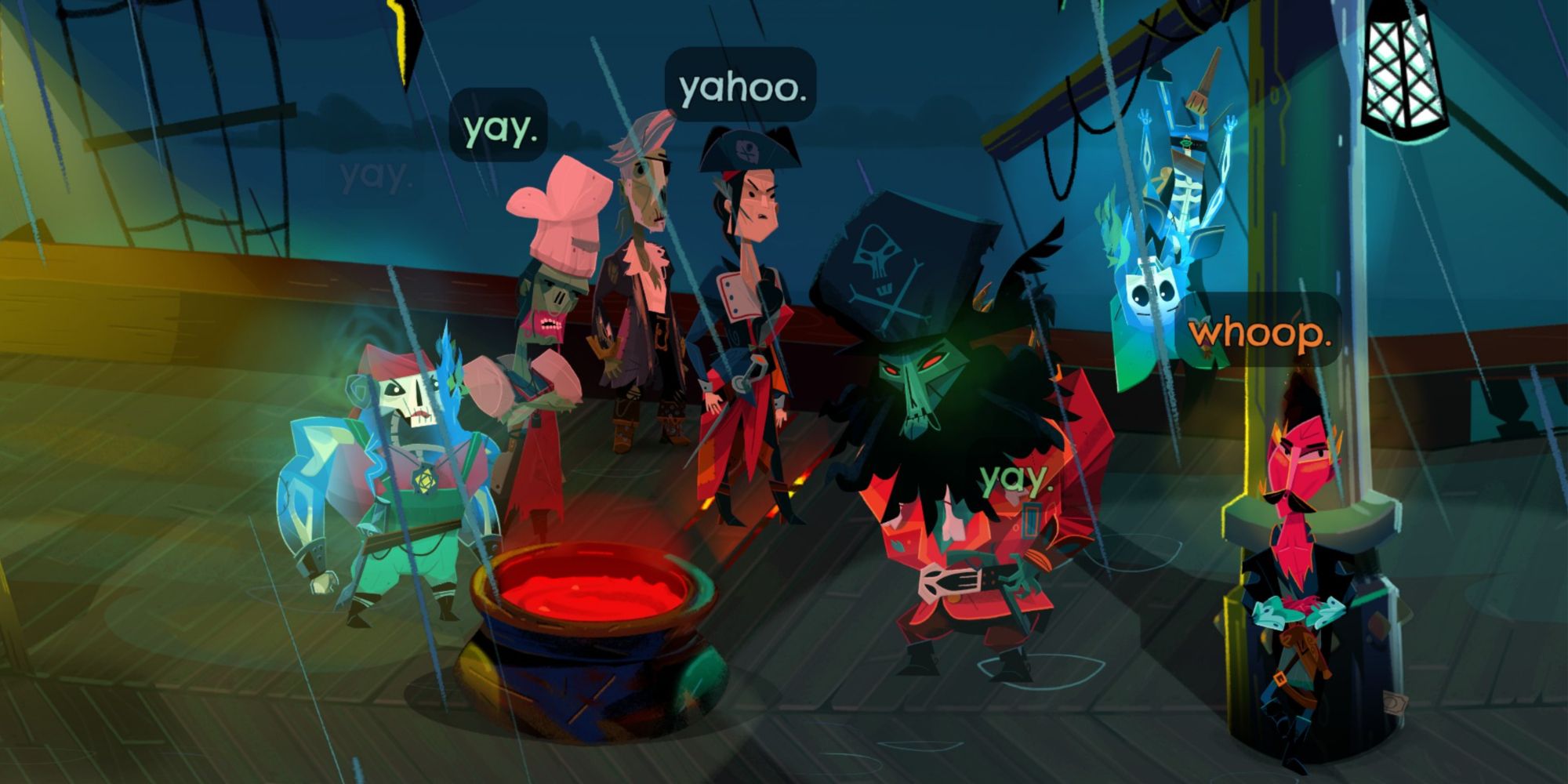 Walk over to the right of the deck, talking to the crew if you so wish, and head down into the ship. Go to the left – you'll be caught out of the hold and unceremoniously thrown back in there – luckily, it's where we wanted to go anyway! Pick up Murray. He doesn't fit the requirements for the puzzle – he isn't flat – but you might as well take an old pal along with you! 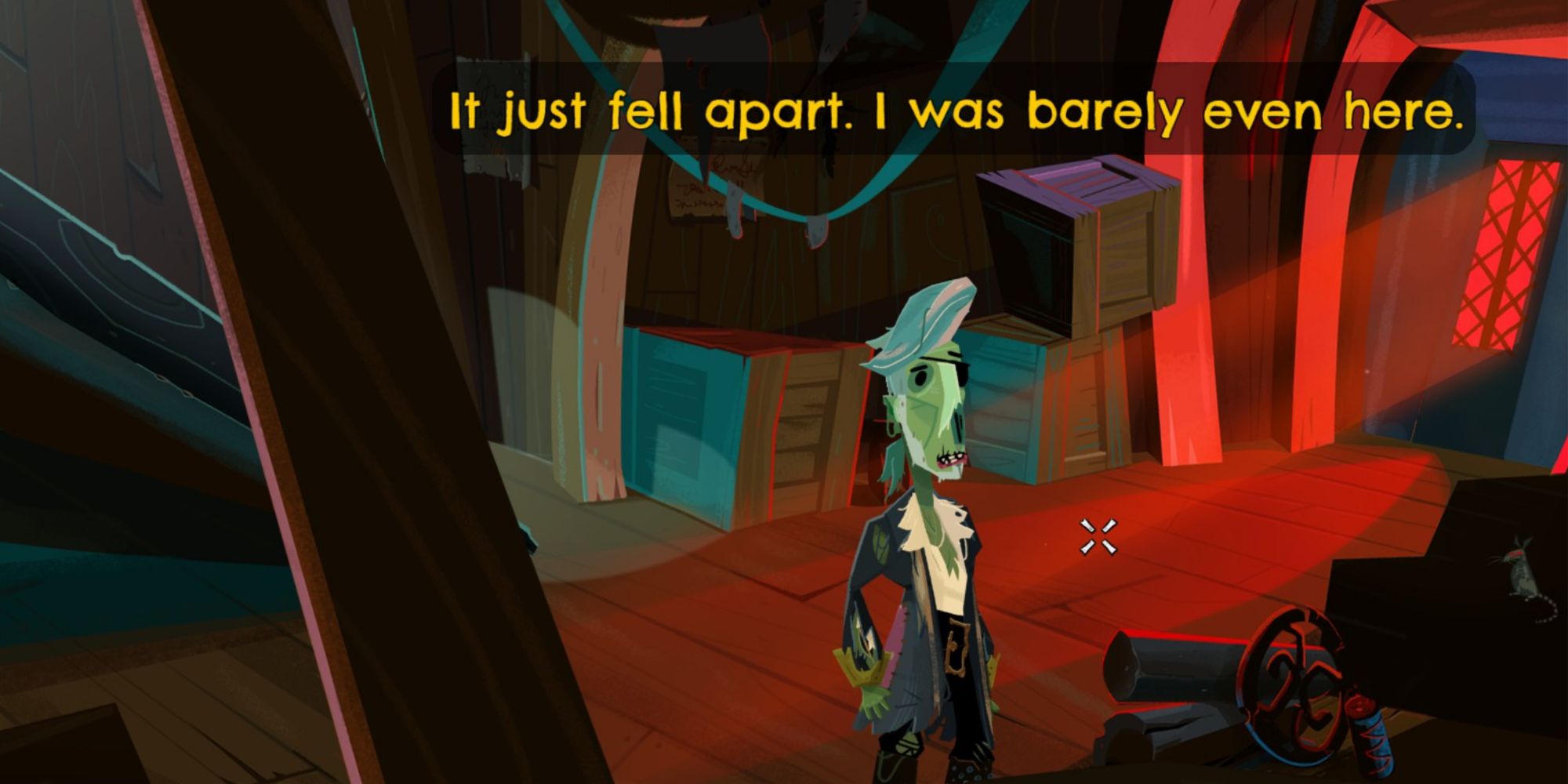 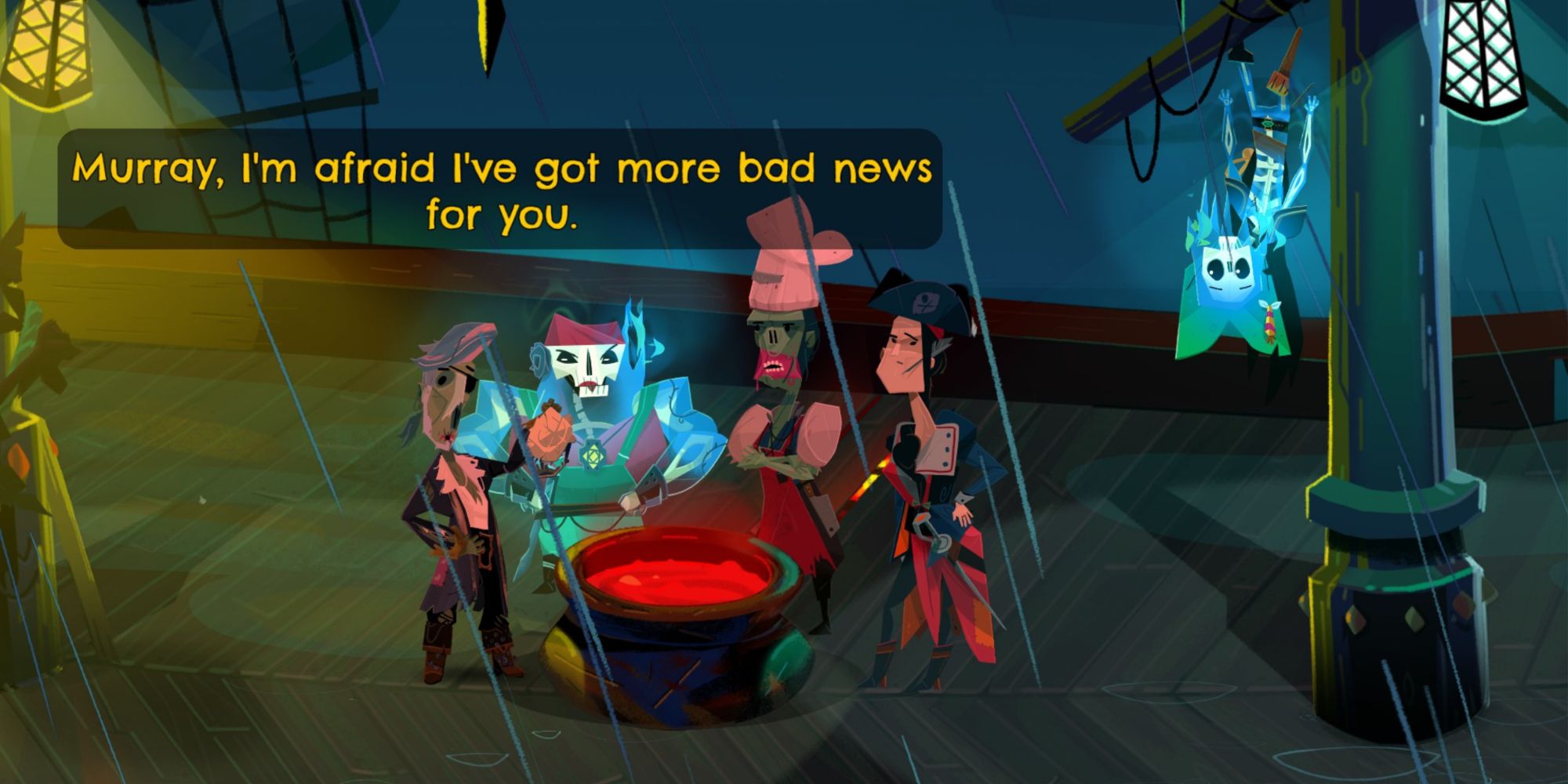 Head up back to the deck and toss Murray into the cauldron – don't worry, after a cutscene, you'll have him right back in your inventory!

On Casual Mode, you won't have to go through the effort of putting the mangle back together. It'll stay perfectly functional. 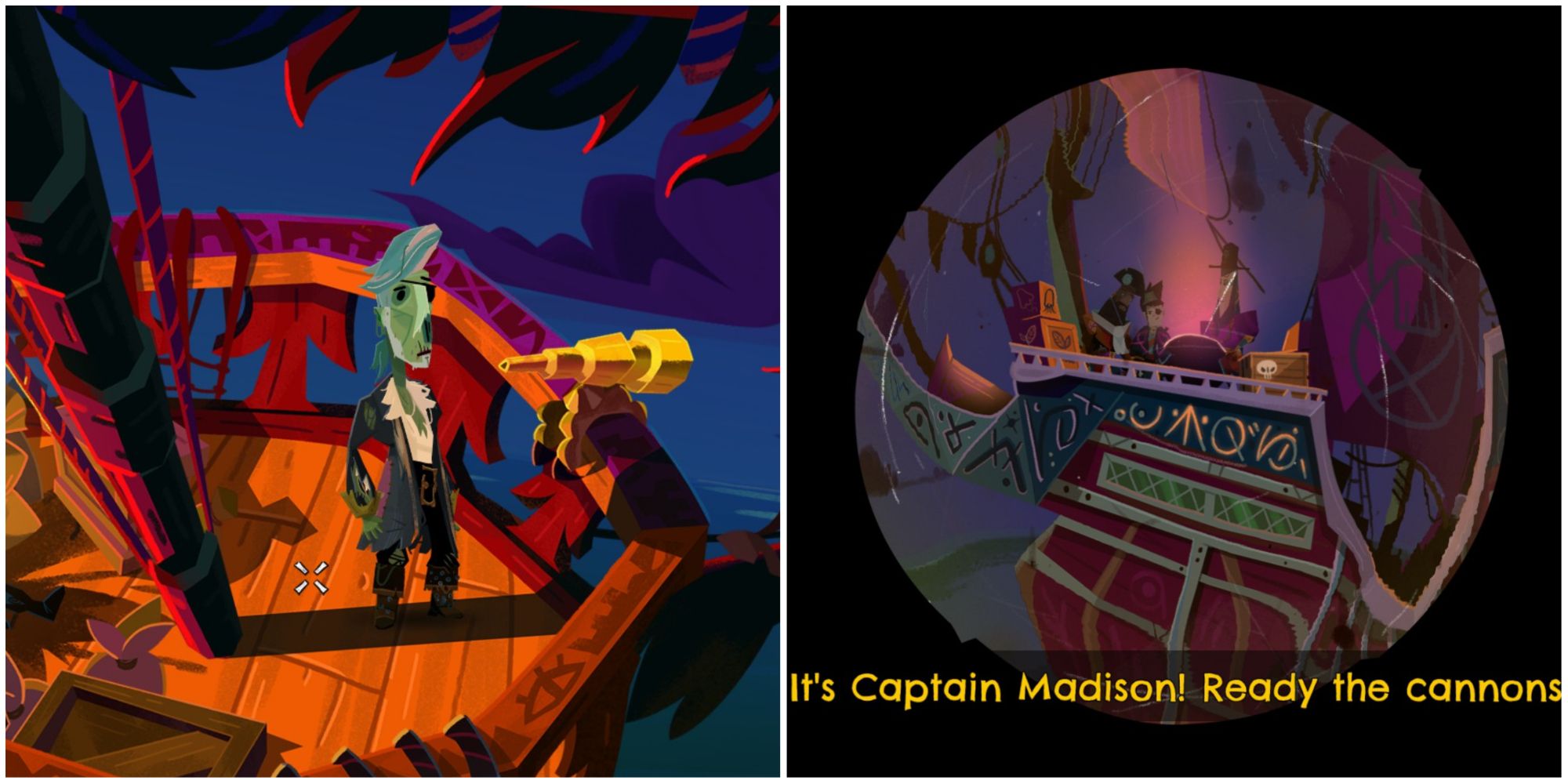 Exploring the deck will reveal that you can now mess around near the ship's wheel, and you can also head up to the crow's nest. You'll also have free reign of the inside of the ship.

Head up to the crow's nest, and you'll be able to use the spyglass on the right. Click the arrow on the right side of the screen to turn the spyglass all the way to the right, and you'll spy another ship, crewed by the new pirate leaders – Captain Madison and her cronies. Some quick deductions will have you learn that they're also on the way to Monkey Island, and their potion is missing only one ingredient – a flattened skull.

A new plan forms – help them complete their potion and follow their ship to Monkey Island. You'll also need to steal LeChuck's map to the Secret, so he doesn't get his hands on it.

Head back down the mast and talk to Iron Rose. You'll find out that if you want to enact Guybrush's new plan, you'll need to hold a vote and have the entire crew vote for it. At the moment, they all vote nay. There are five crewmates to convince: Iron Rose herself, Flair Gorey, Putra, Flambe, and Apple Bob.

How To Get The Crew To Vote For Your Plan 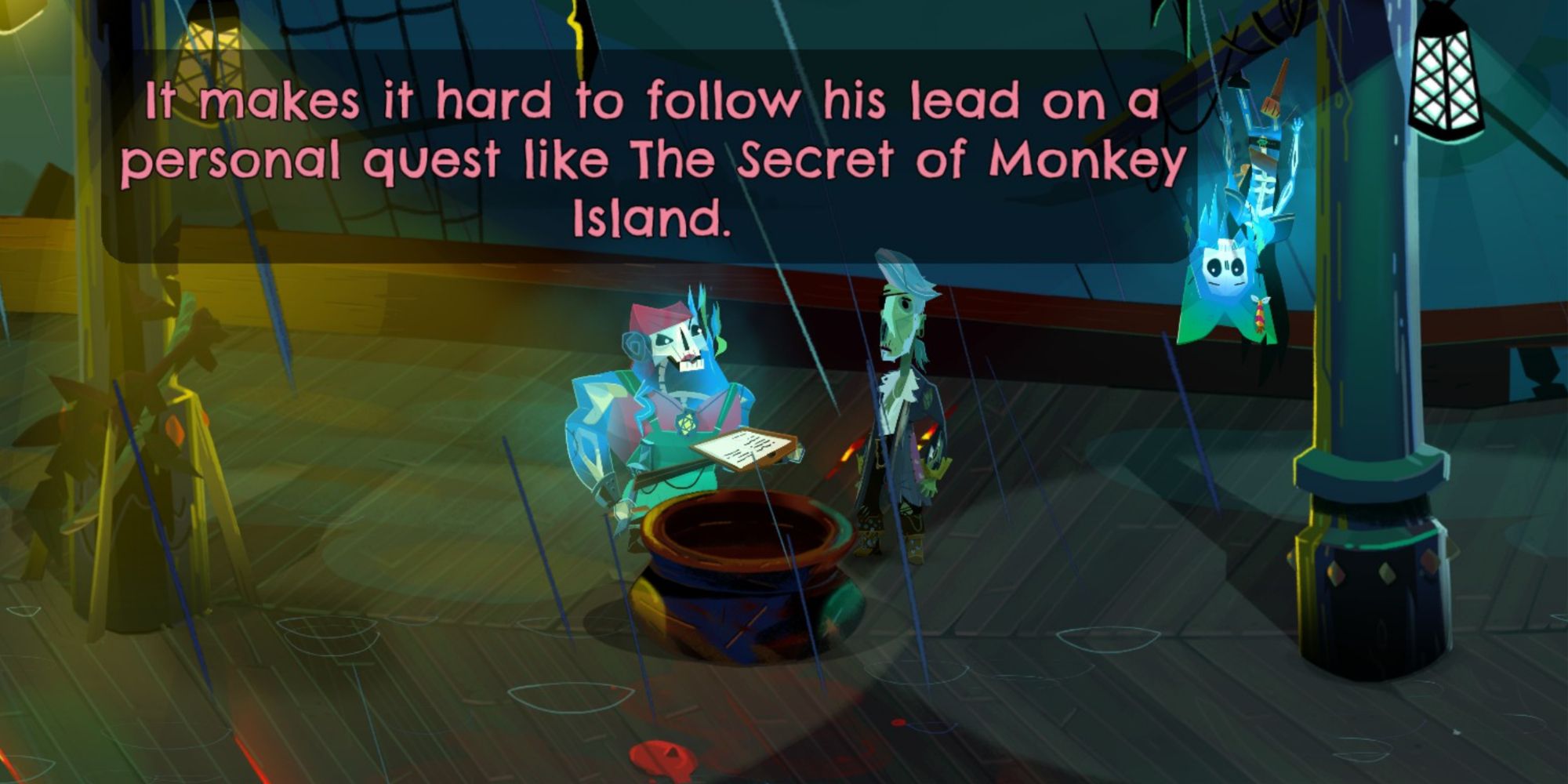 Talk to each crewmate about what it would take for them to vote for your plan. 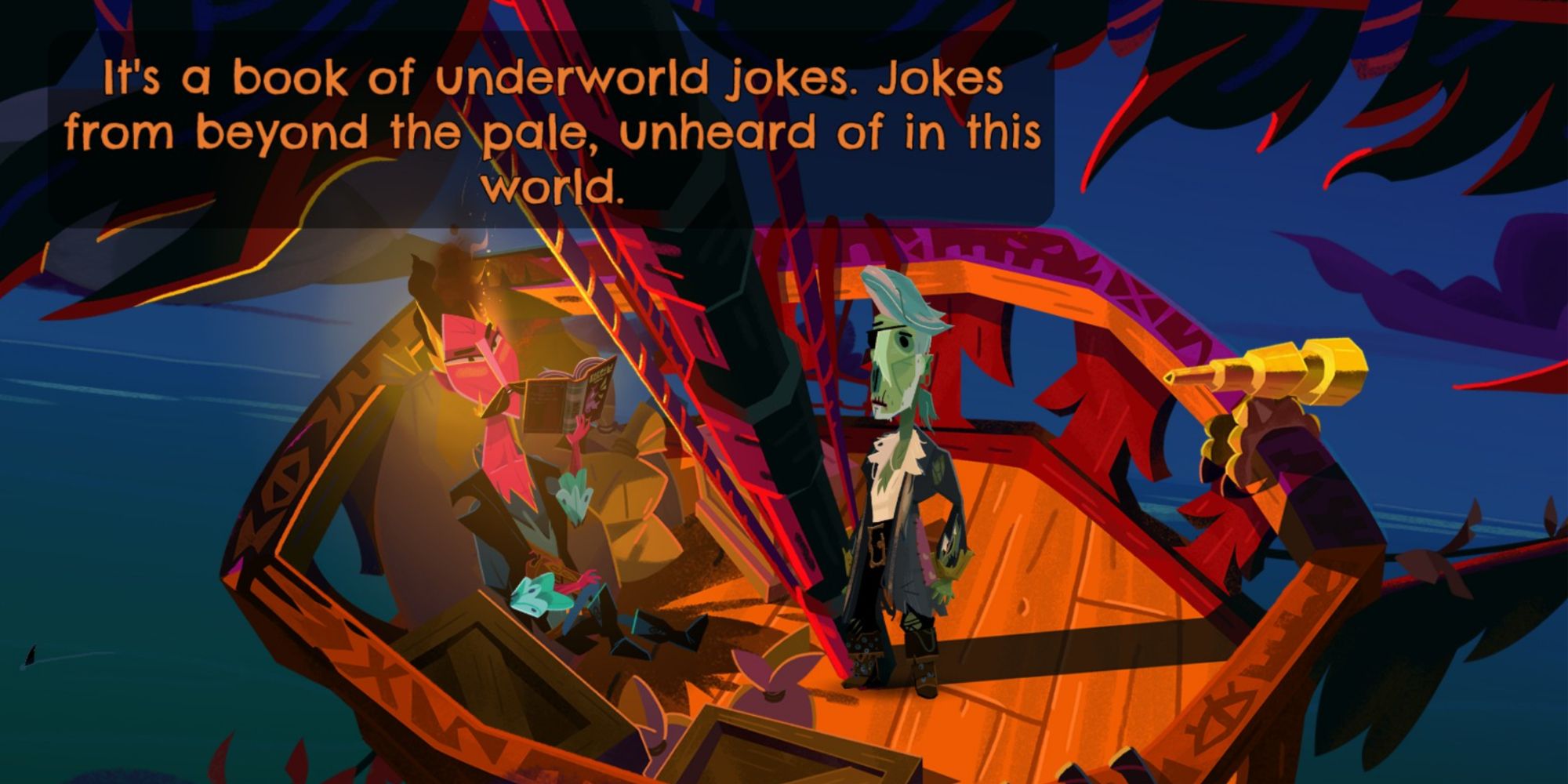 Talking to the crew will also reveal some problems – that you'll have to solve yourself, naturally. 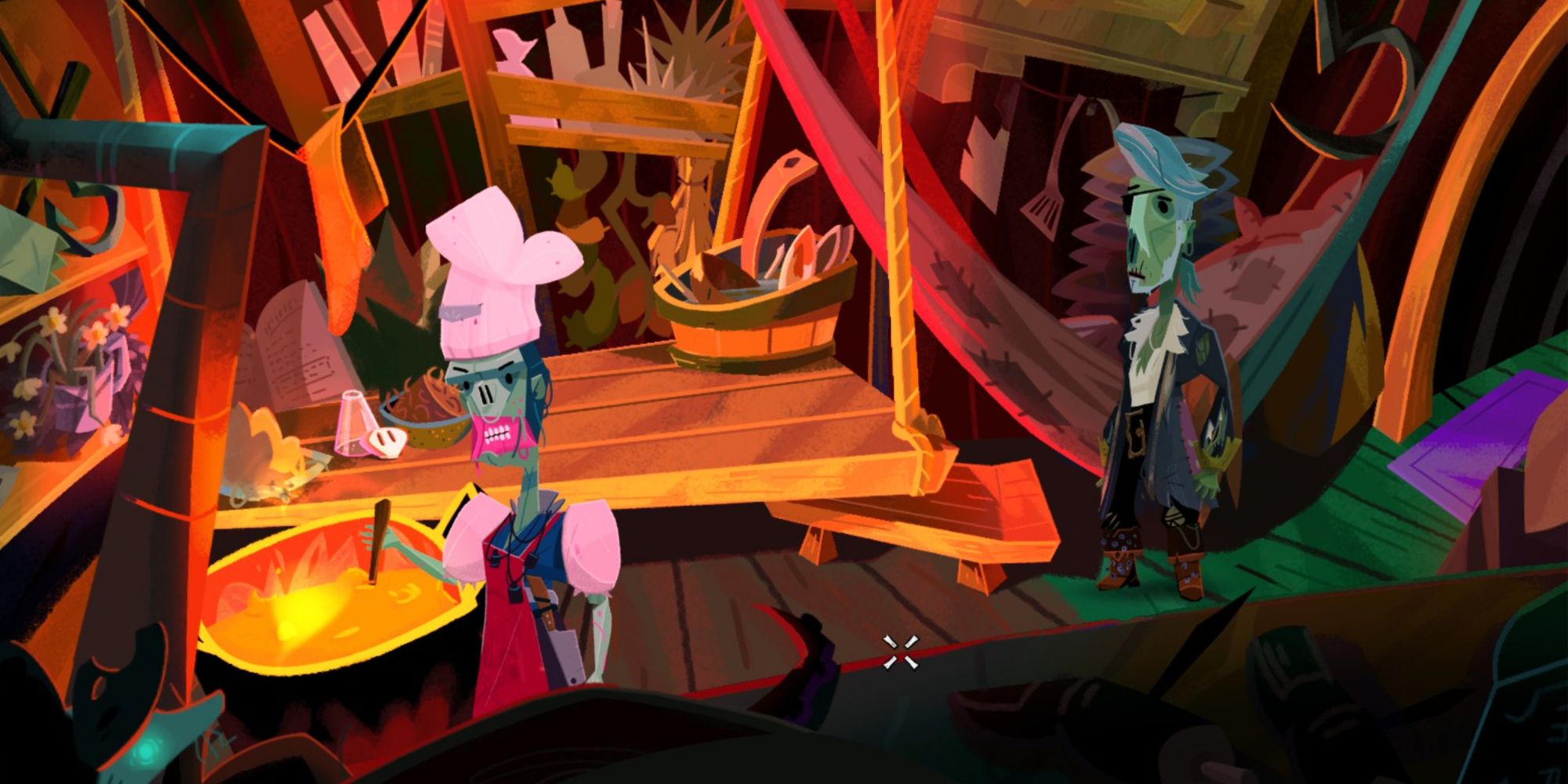 Time to get some items! While talking to Putra, she should have slammed her application form on the table in the galley – pick it up and offer to help her out with it. While you're there, examine the pepper shaker to learn about demon pepper, something that would make a Scorched Alaska the perfect heat level for Flambe.

On Casual Mode, the pepper shake isn't empty, so this clue can be ignored!

Head to the right of the ship from Flair and enter LeChuck's quarters. You'll automatically enter conversation with him and end up booted out of the room. Head back in and you can actually interact with things in the room – but not much, as LeChuck will tell you off, especially if you examine the map on the desk. 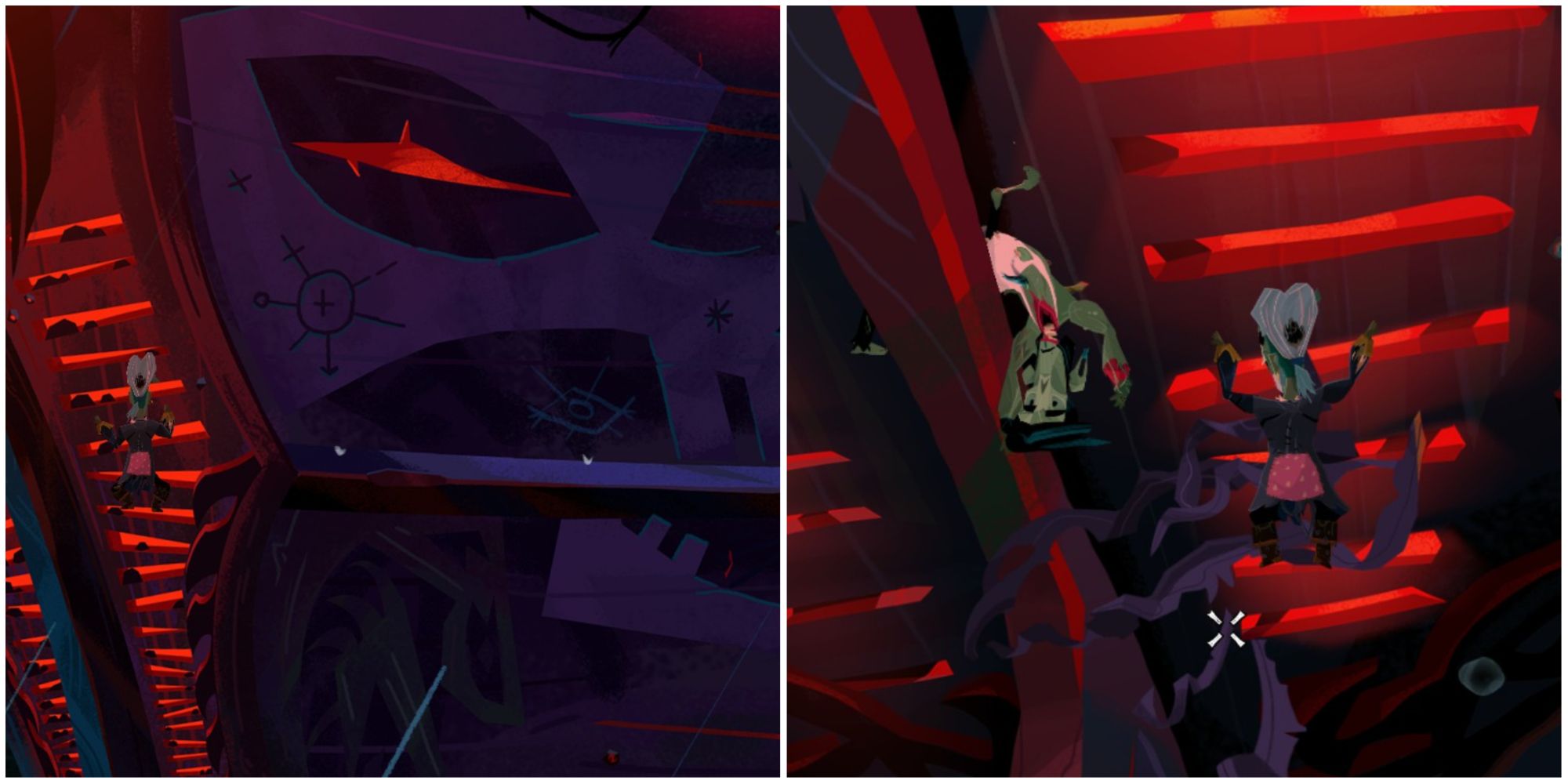 Try to give LeChuck Putra's promotion request, and he'll deny it outright, stating he won't sign it. Try to leave, and he'll give you a swabbie report to fill out, ordering you to get Iron Rose's initials on it. You'll need to find five messes on the ship to report – use the swabbie report on each of them:

Give the completed report to Iron Rose, and she'll hand it back to you with a whole stack of papers. Combine this stack of papers with the request for promotion, and give the resulting stack to LeChuck to sign. With that, you'll receive a signed promotion request, which you should promptly hand over to Putra. On the way, hand over the knife you pulled from Gullet's back to Flair Gorey – that's one vote secured! 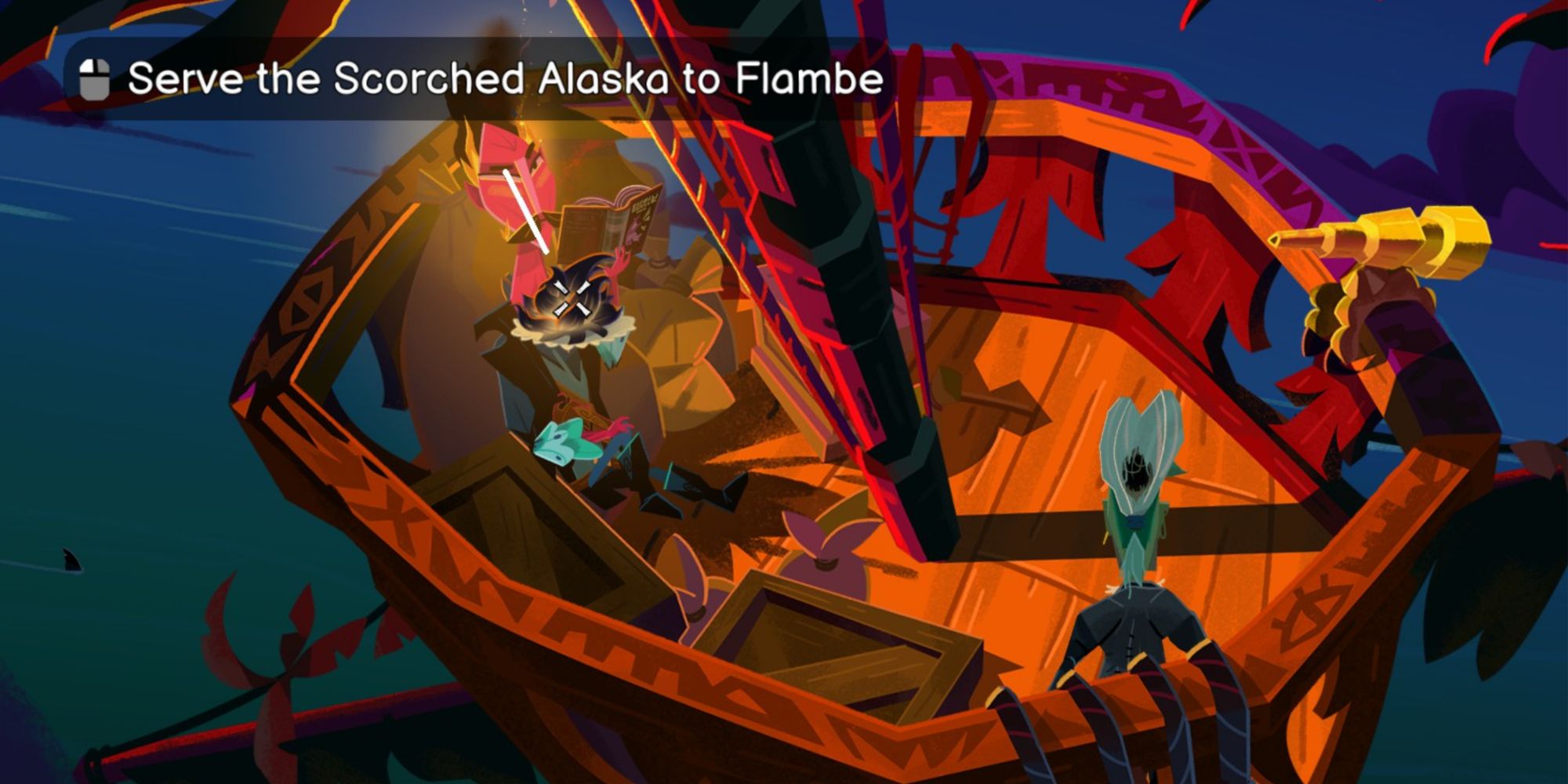 While this doesn't get Putra to vote with you, you can now get her to cook you a Scorched Alaska. Head up to the deck and use your ceremonial knife on the flare next to the cannon. You'll get a burning tip – combine this with your Scorched Alaska. This is exactly what you need to satisfy Flambe. Not only that, but he will drop the joke book, which he will let you borrow. Two votes secured!

On Casual Mode, Putra's pepper shaker isn't empty, and she'll apply the Demon Pepper directly to the Scorched Alaska, cutting out any need to get the flare and combine it with the dessert.

Hand the book to Apple Bob. That was easy, three votes secured! The only thing left now is to convince Iron Rose to believe in LeChuck again. It's easier than you might think – just hand her the instructional pamphlet that you picked up in the hold at the beginning of the act. Four and five votes secured!

If you're unable to hand Iron Rose the pamphlet, you might need to talk with her more about her vision of LeChuck first to find out about her disillusionment.

Climb the stairs up to the ship's wheel and take a look at the bell. Ringing it once will start a vote, but ringing it twice in quick succession gathers the whole crew around the cauldron, including LeChuck. Ring the bell only once for now. The crew will gather, vote, and agree to your plan. That's one objective sorted!

How To Steal LeChuck's Map 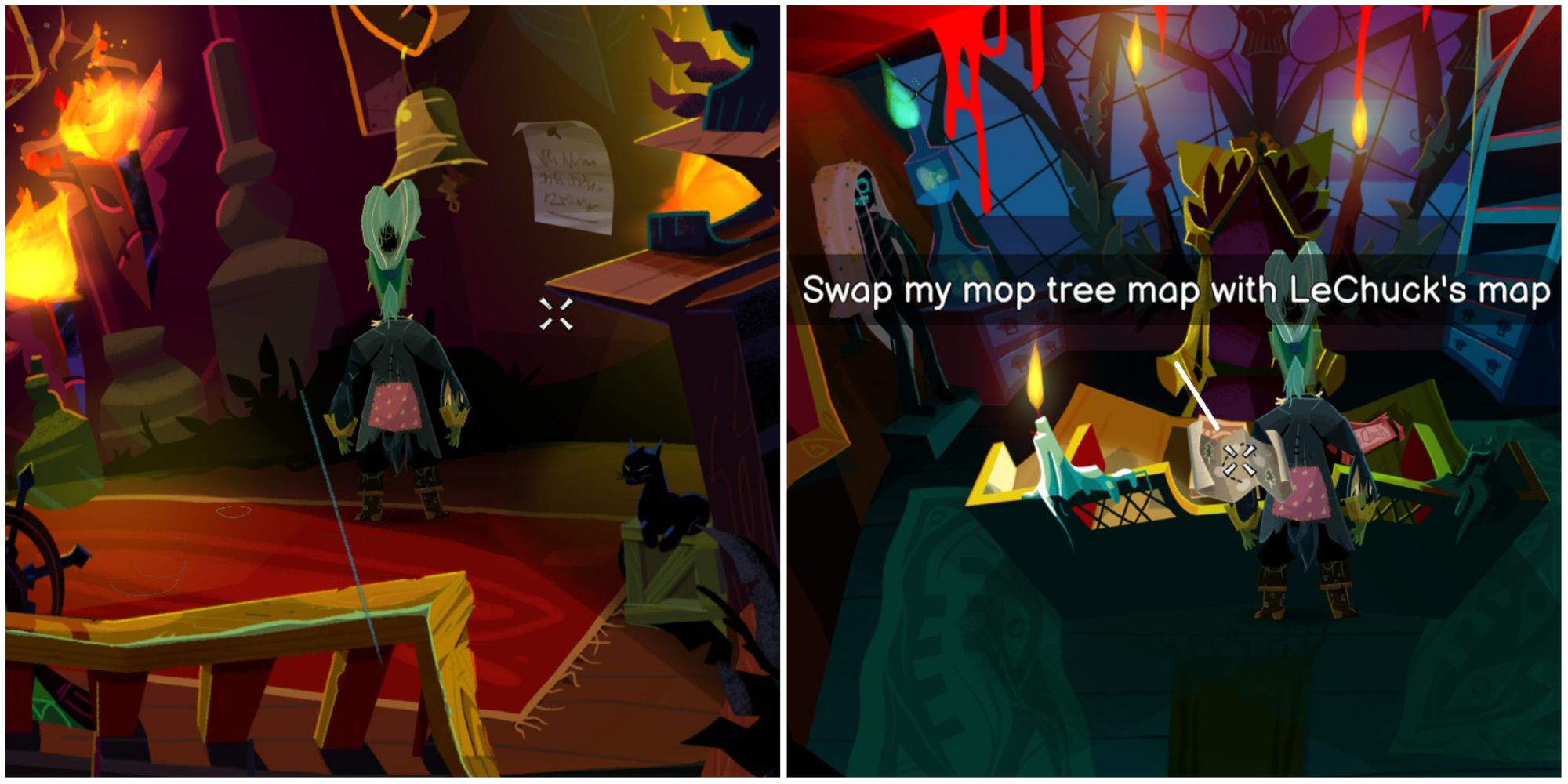 Now, ring the bell twice in quick succession. LeChuck will come up from his cabin to yell at the crew.

While the crew is distracted, head down into the ship and into LeChuck's quarters. To get the map on the desk, swap it with the mop-handle tree map that you received from Wally in the previous act.

How To Complete Captain Madison's Potion 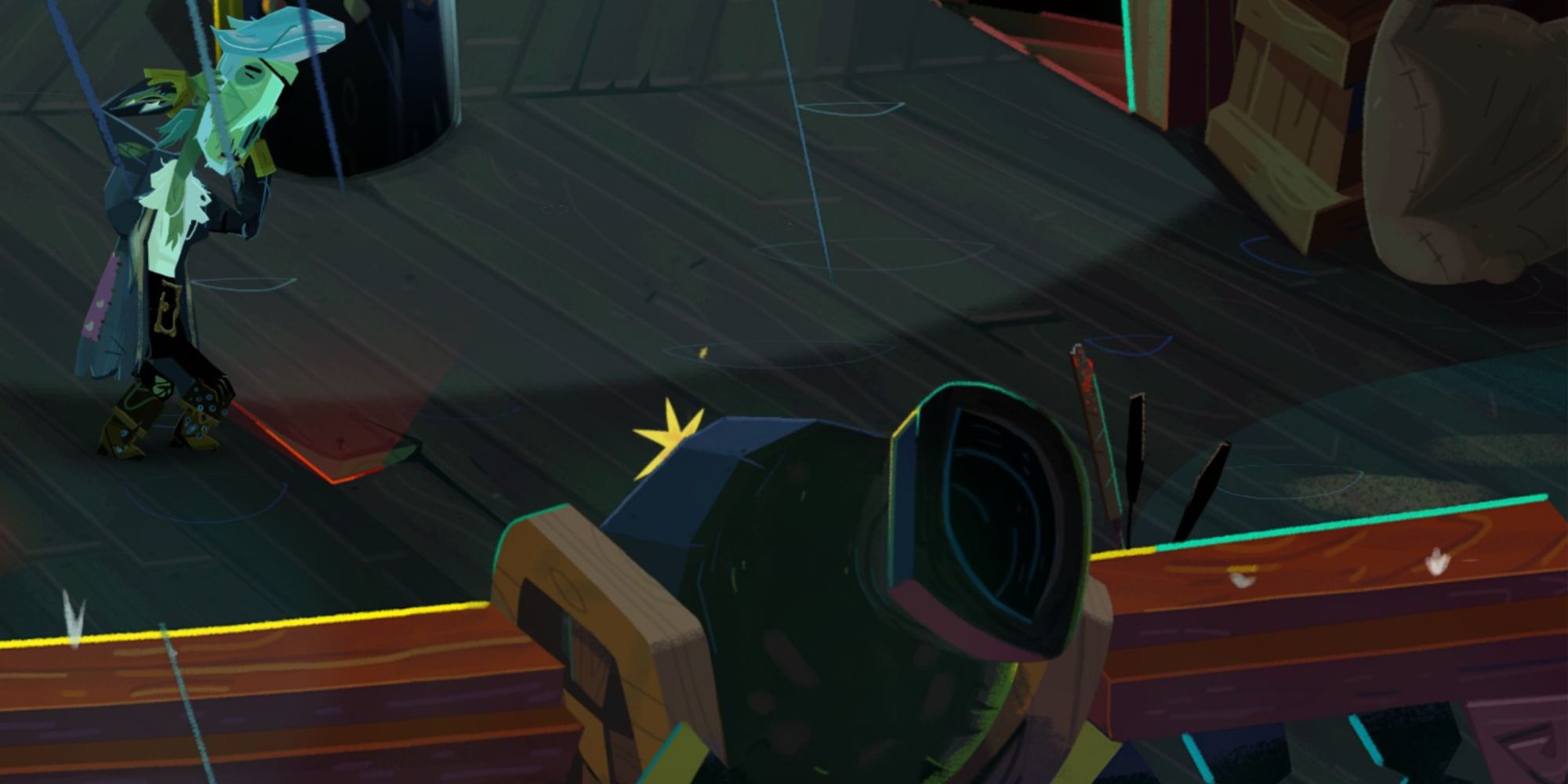 Now it's time to get Murray the pressed skull over to Captain Madison.

This is simple enough – just shove him in the cannon and light it. A short cutscene will play, with Guybrush ending up in deep trouble, yet again.