Your choice of main character in Romancing SaGa: Minstrel Song will heavily alter the first few hours of the game. They all start out with different parties, starting locations, and skill loadouts. Some of them are far easier than others.

Albert is a noble's son who starts in the central location of Rosalia. His introductory quest is the longest of all the characters in the game and is a great introduction to many of the game's mechanics and curveballs that it'll throw at you. 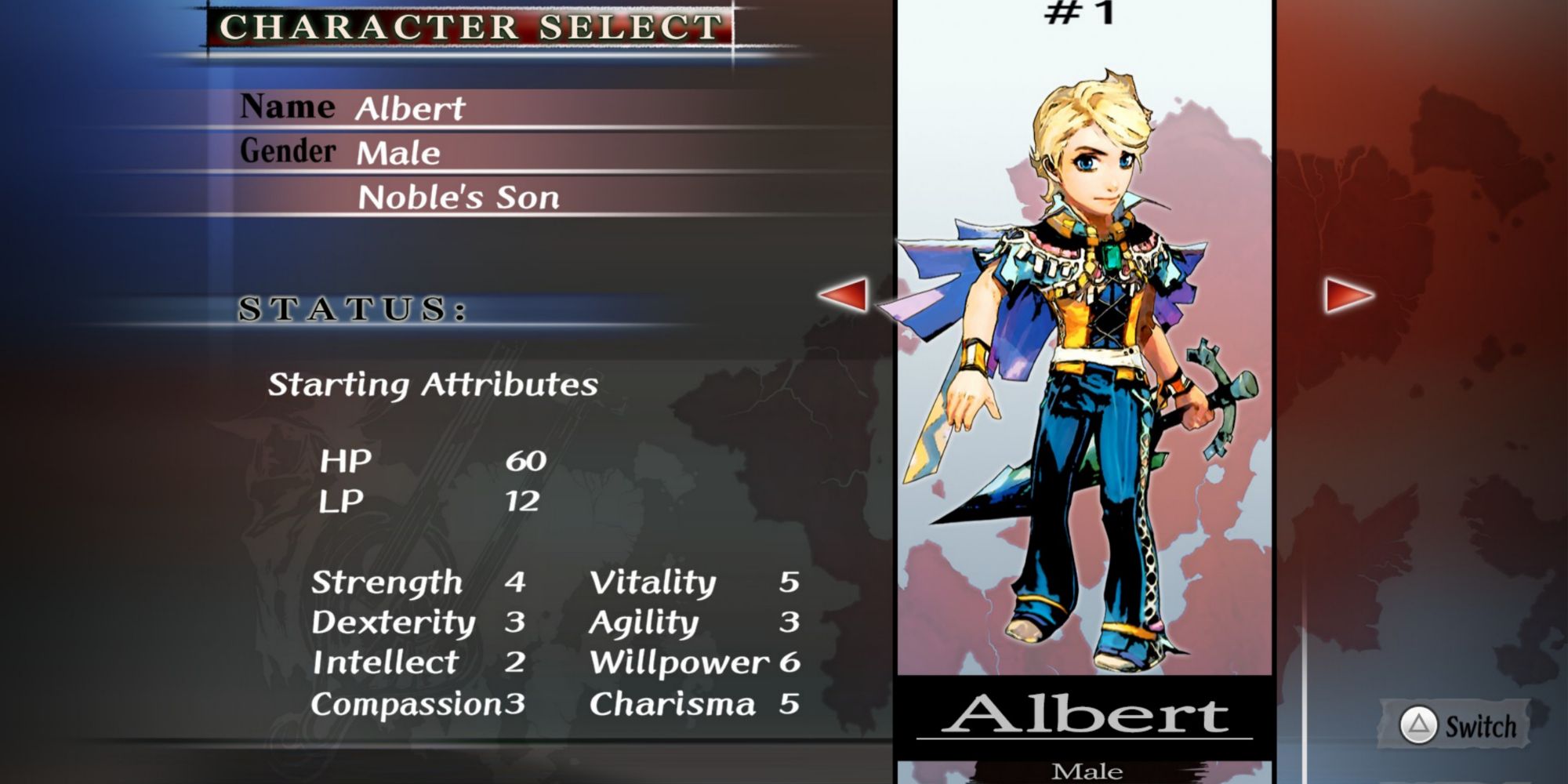 Of the eight possible main characters, Albert is one of the better picks for newbies to Romancing SaGa. His introductory quests are the most similar to traditional RPG fare and he's also a pretty great character to boot.

However, thanks to the amount of fighting you have to do in before the world opens up, it's possible that you end up with too high an Event Rank to take on some quests. Check out our Event Rank guide for more details.

By the time you finish the opening quests, you'll have a party of two:

Below you'll find a quick walkthrough for Albert's opening scenario. It'll tell you where to go, but also point out optional tasks you should consider.

Monsters To The East 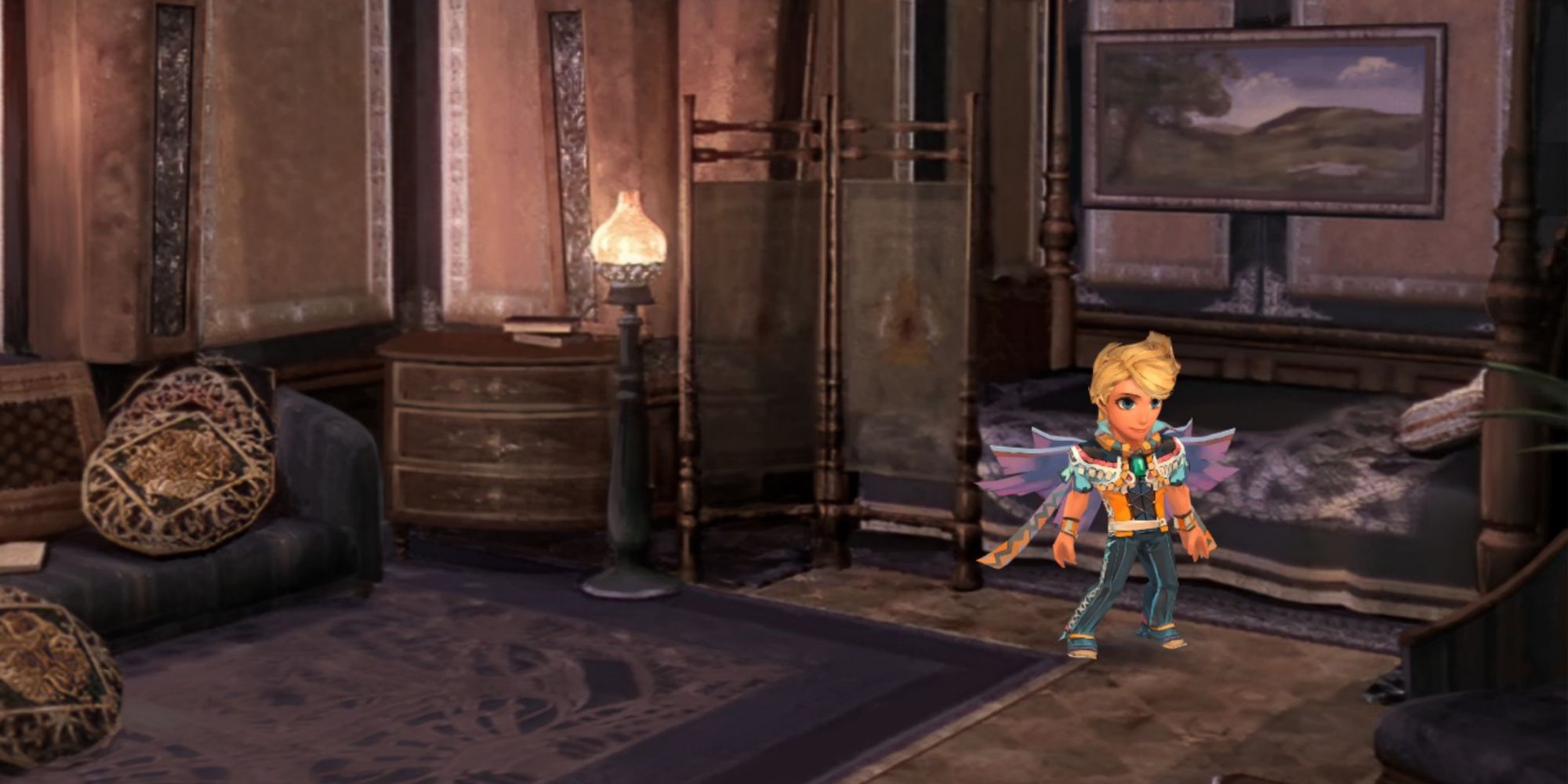 Albert's scenario opens with him waking up in bed, as all classic RPGs do. Diana will come in and tell you to get equipped – do this in the menu. Equip Albert's sword and all the armor pieces he has, and then head out of the bedroom and then down two flights of stairs. The fortress isn't very expansive, don't worry about getting lost.

Talk to Diana in the throne room and you'll get your first quest in the ensuing cutscene: to eradicate the monsters in the cave to the east. Diana and two nameless Soldiers will join you. 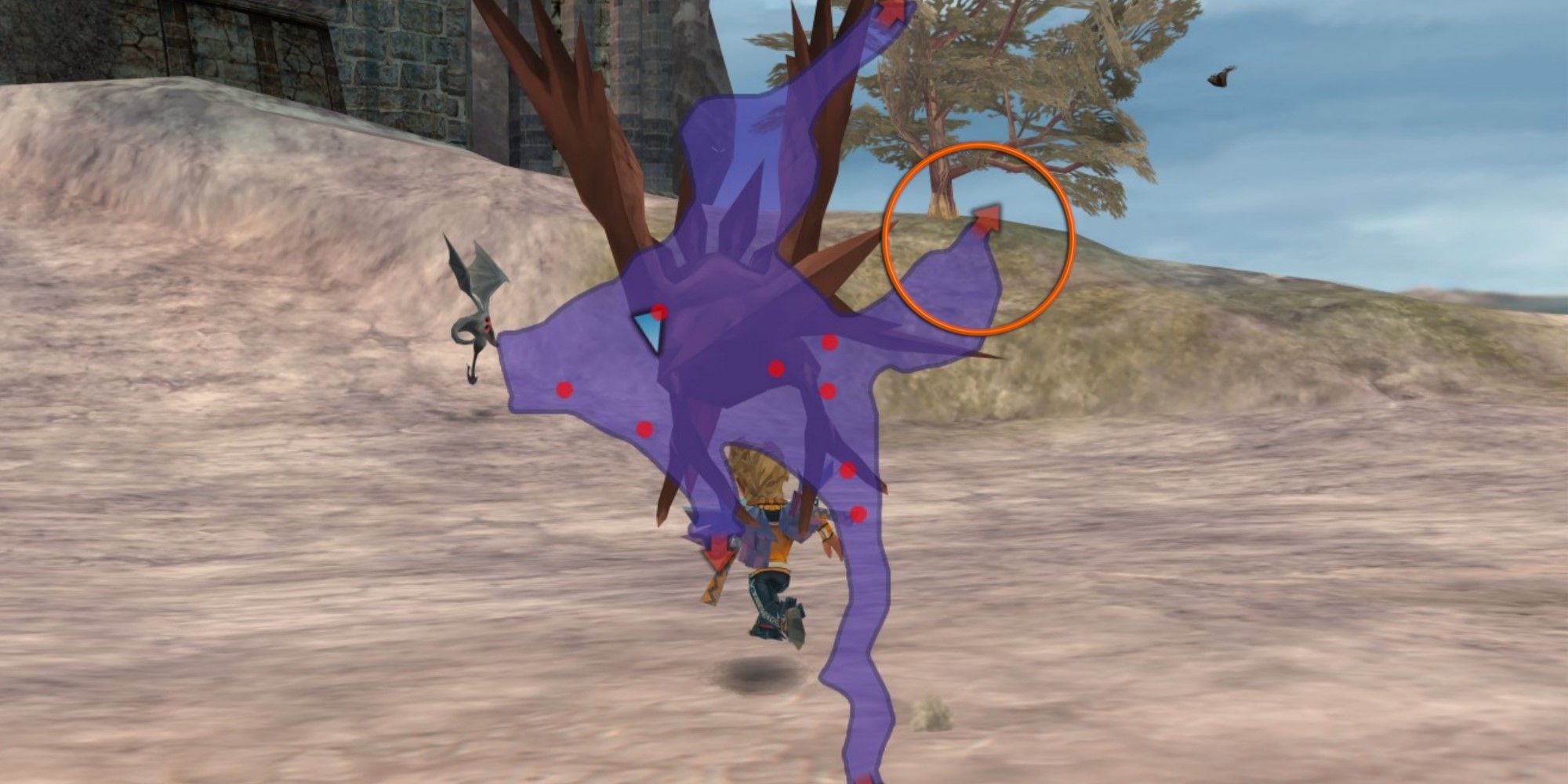 Leave the fortress – don't worry about the chest behind the locked gate, you can't get that yet. You'll end up in an overworld area – the cave you need is the easternmost red arrow.

Inside the cave, be sure to equip Albert with his Smoke Bomb Pouch, which will let you avoid all of the unimportant encounters here – you won't need stat increases to beat the mini-boss here. Consult the Event Rank linked above for an explanation of why you want to avoid battles.

In addition, equip your First-aid Kit to Diana, who is bulkier than Albert and will have a better chance to make use of it. 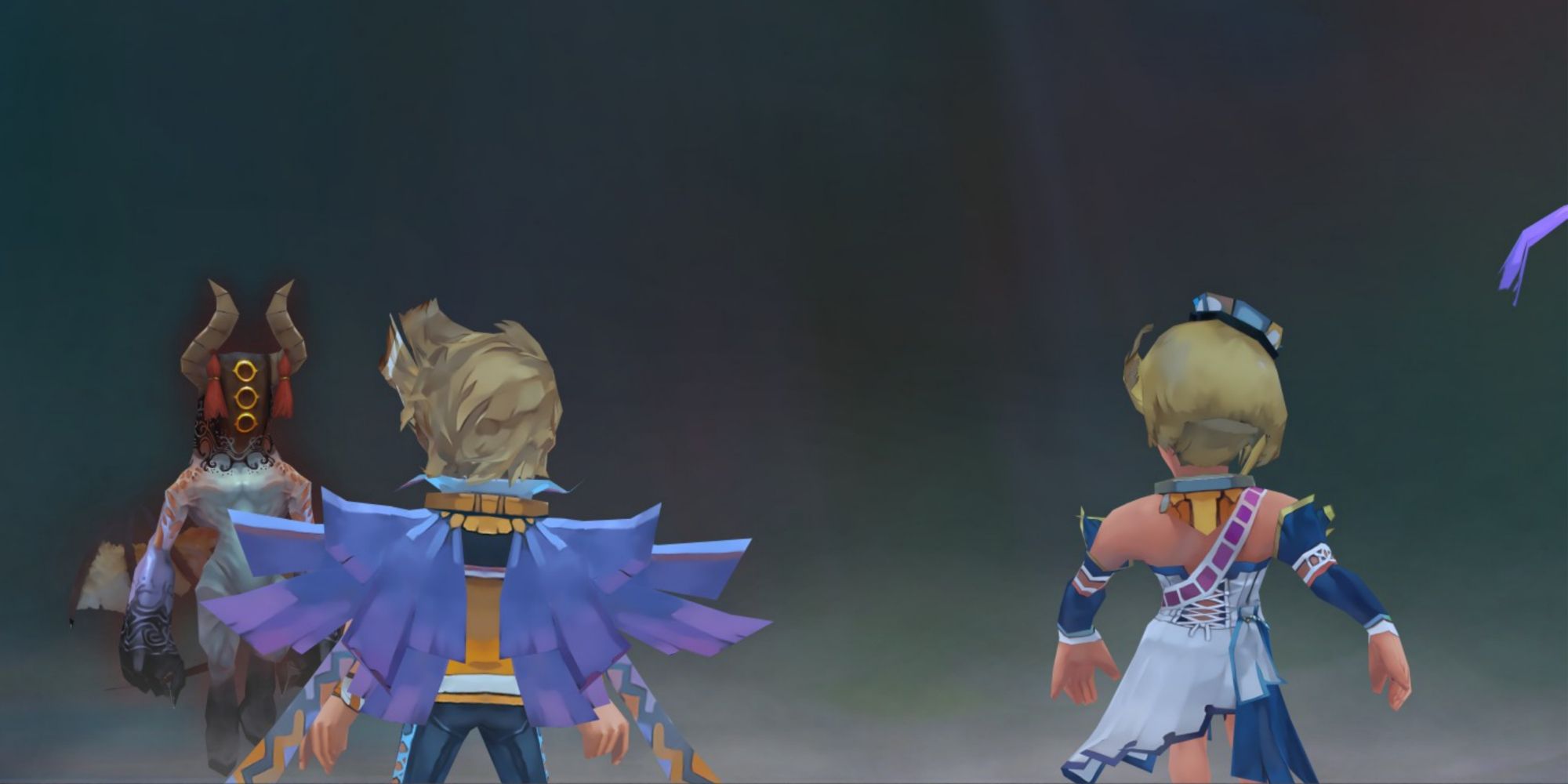 At the end of the short cave, you'll find a mini-boss. Save before getting too close.

Once the monster is down, it's time to return to the fortress. Before you do this however, unequip everything that you can from Diana and the Soldiers, they won't be sticking around long and you can use/sell these items.

Talk to your father to end this quest, see an interesting cutscene, and get a nice little hoard of jewels. Your goal is to head to Crystal City to ask Prince Neidhart for aid. 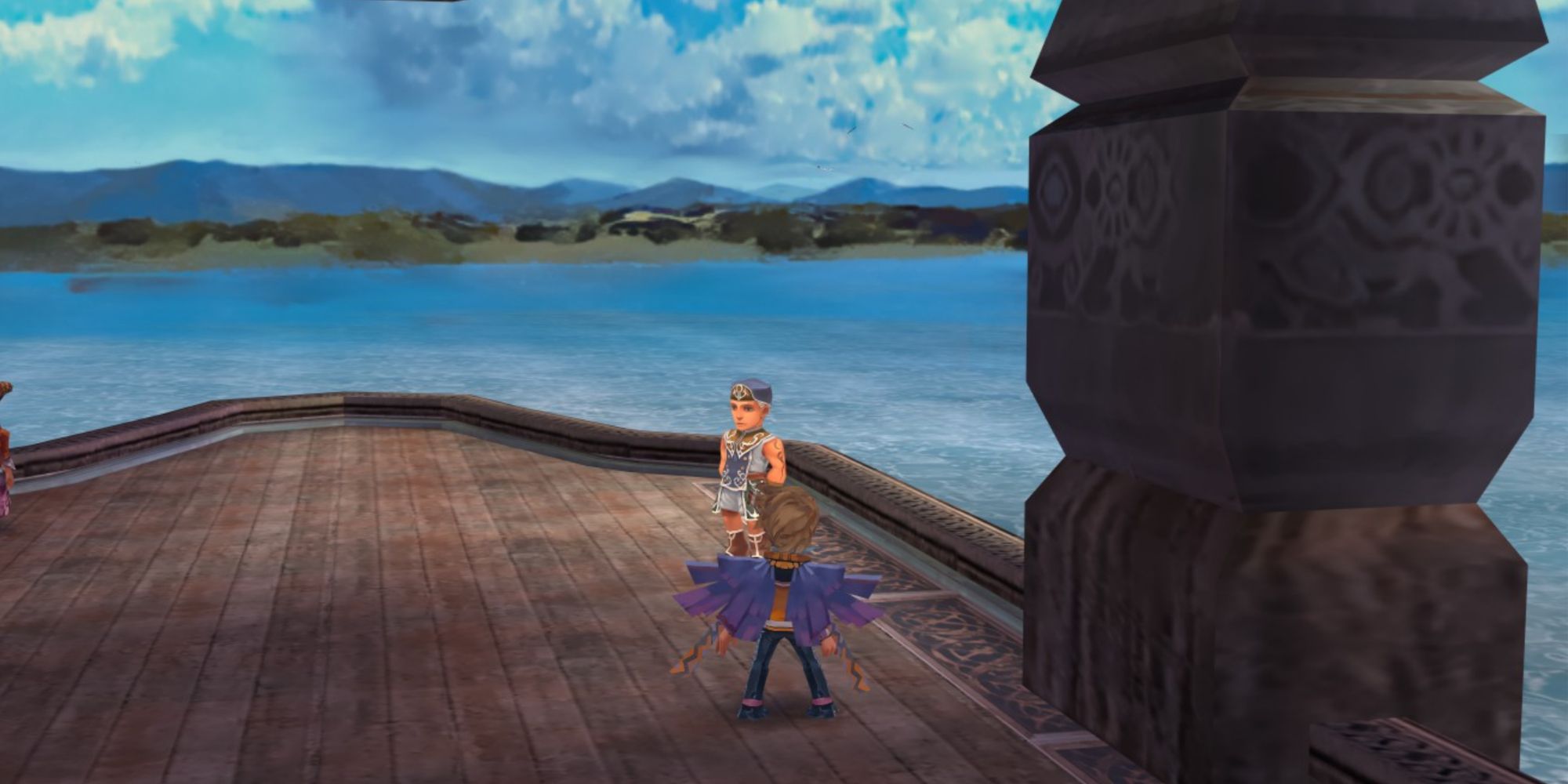 After the short cutscene with Monica (who is now a recruitable character in this remaster!), talk to the NPCs in Loban until one of them suggests a route to the Crystal City, which is your current destination. This unlocks Bruelle.

Before you leave Loban, talk to the Mentor here and get him to teach Albert the Jump Proficiency. Don't worry that you don't have the skill for it yet. Do not spend any of your jewels – we're going to spend them in a little while to get an early level two Jump skill.

If, while in Loban, you get accosted by a guard, you'll be thrown in prison. Simply examine a wall to the right of the cell door to reveal a passage, witness a short and eerie scene, and escape. You won't get imprisoned again after this.

Leave Loban and go to Bruelle. Talk to NPCs and take a look at the shops here if you want – there's not much of note here. We mentioned earlier that Imperial Knight is a good class for Arthur – don't spend jewels on this yet, it's too expensive at the moment.

Before you leave Bruelle, make sure you rest in the inn to restore your Smoke Bomb Pouch uses!

Talk to the man at the end of the pier and take him up on the offer for a ferry to Yeoville. Unfortunately, it'll end in disaster. If you recruited anyone at the bar, they'll leave your party, so strip them of their equipment before you take the ship. 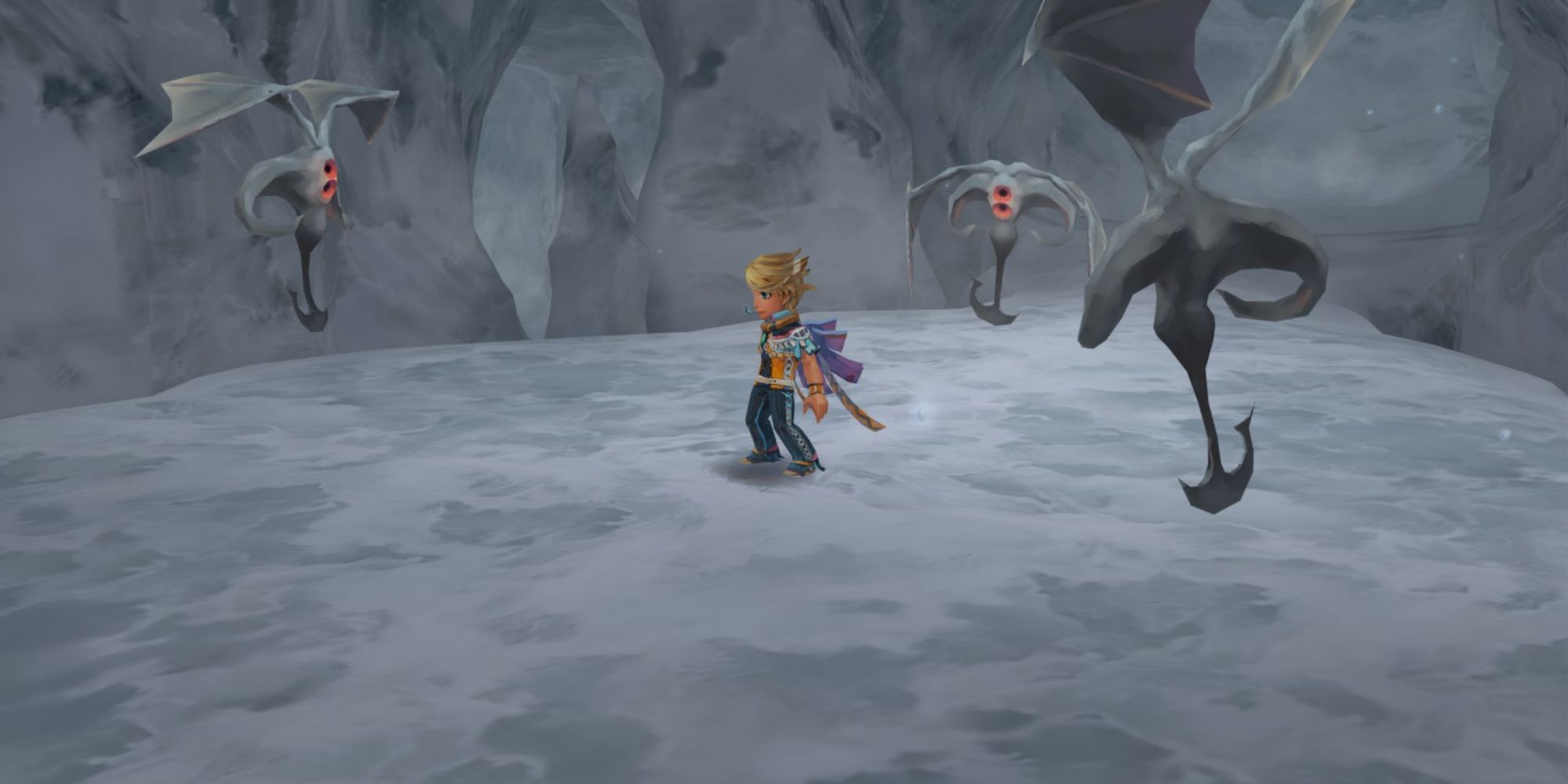 You are now in Gato's Village. During the cutscene with Gato and Sif, agree to help them with their monster problem – you'll have to do it either way, and declining means you don't get Sif, who will be a great help.

The Mentor in Gato's Village can train characters in the Valhallan Warrior class – give Albert two levels in this class. You don't have to change him to the class, but it will give him two ranks of Survival, which is what you need to use Jump well.

Before leaving the village to take on the three caves of monsters, head into the pub. Here, recruit the Valhallan Warrior (who makes for a pretty strong ally for quite a while, for a generic) and the Minstrel. Having four characters will make this quest a lot easier.

You only have the beat the stationary monsters at the end of these caves! Actually clearing them out will raise your Event Rank prohibitively high. Don't do that. 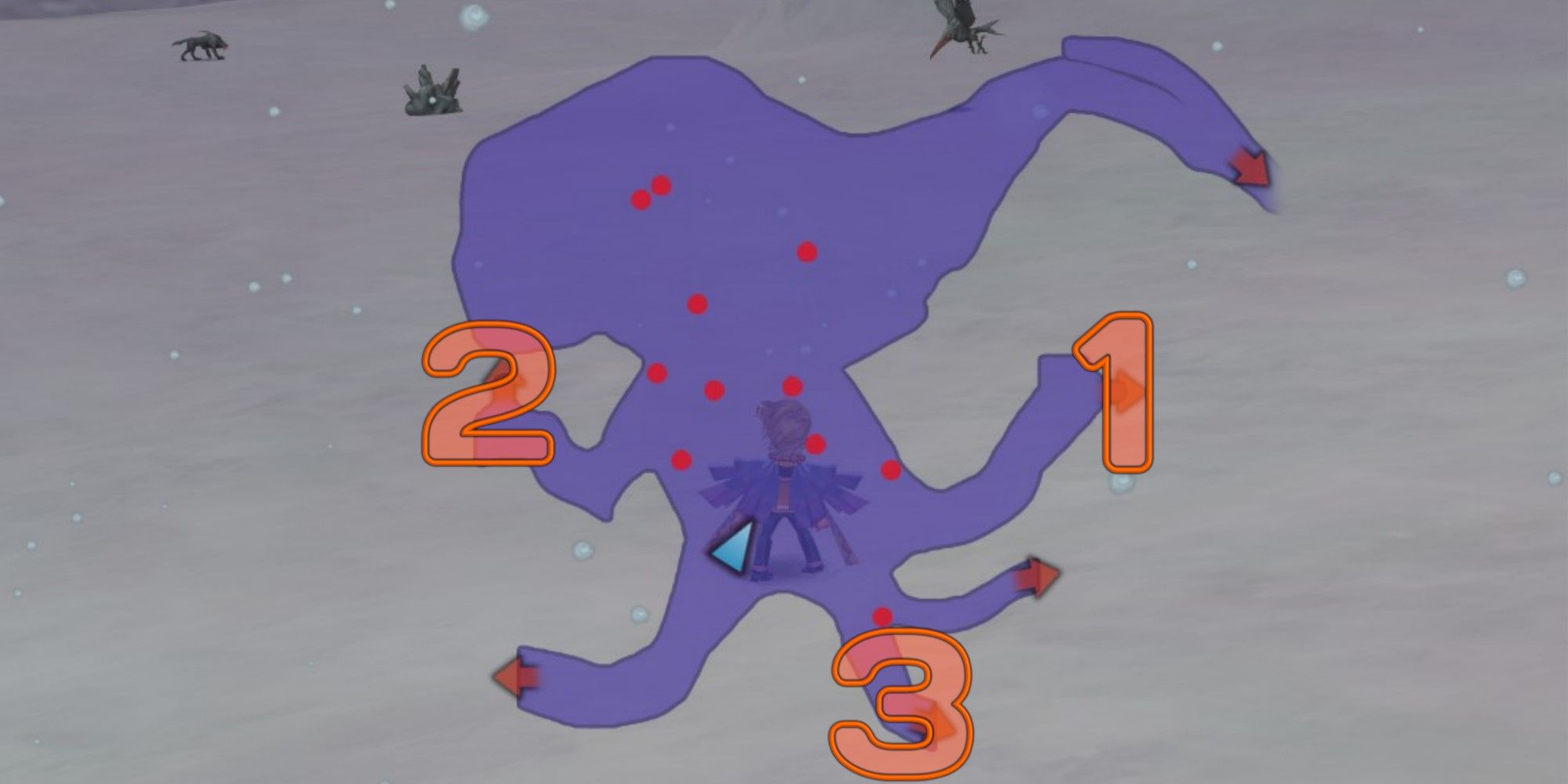 Leave the village. The three caves you need to clear out are depicted in the image above: the cave on the far right of the screen has the easiest fight, so take that on first, then take on the cave to the left of the screen with the upwards-facing arrow, and then the bottommost arrow on the right has the hardest encounter.

If you run out of Smoke Bombs, use the Minstrel to Retreat from battles if you care about keeping your Event Rank manageable. He has a ton of LP and can always be recruited easily by heading back to the bar if he runs out of LP completely.

The first cave is a simple, small room with just the mandatory encounter in it, so you don't have to worry about avoiding random encounters. In the second cave, however, you'll have to either fight or avoid a few encounters. These bosses aren't that tough – they can deal a lot of damage, but also fall quite quickly – focus your attacks on one enemy at a time for the best results.

This is also where your Jump skill will come in handy, so make sure you have it equipped! This cave and the third cave are full of chasms, and some of them can have treasure chests (equip your Find Treasure Proficiency too!) on the other side. 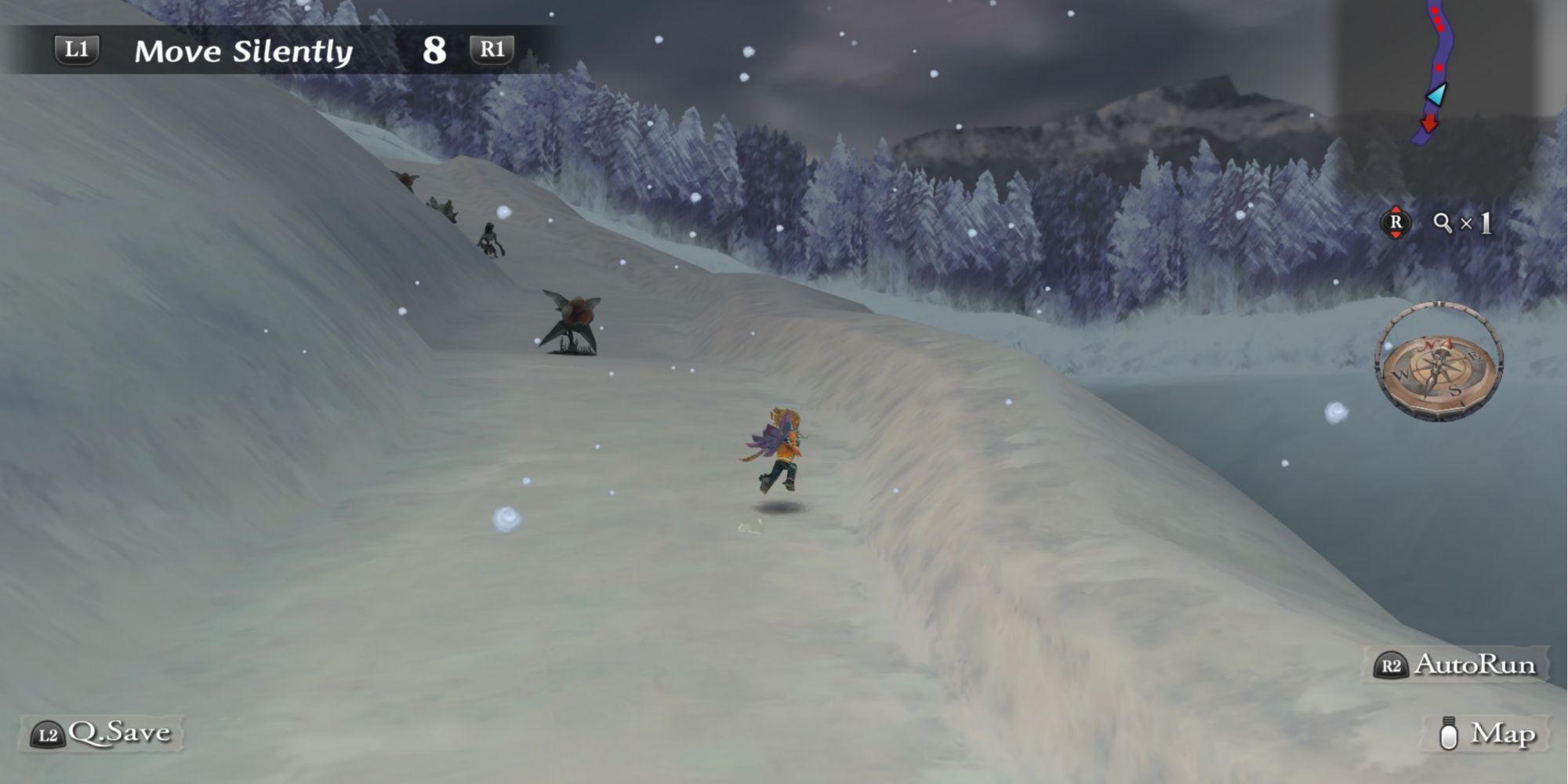 When you take the screen transition for the third cave, you'll end up on a snowy path instead. Head forwards and on the next screen, take the left at the intersection to get to the cave proper. The boss of this cave is a horde of Peggies. Focus on the Peggy Chief to begin with, as it pumps out the most damage.

Your success will depend on how quickly you can thin out the herd and whether or not they're able to finish off any of your party members quickly – if anyone's learned physical moves such as Impact Slash or Cut Timber, they'll likely one-shot the minion Peggies, which will make things manageable.

After beating all three stationary monsters, return to Gato's Village and talk to Gato. You'll get your reward and unlock the ability to travel around the world, finally.

When you get to Eugenstadt, talk to Lord Heinrich in the keep for a free trip to Mirsaburg. 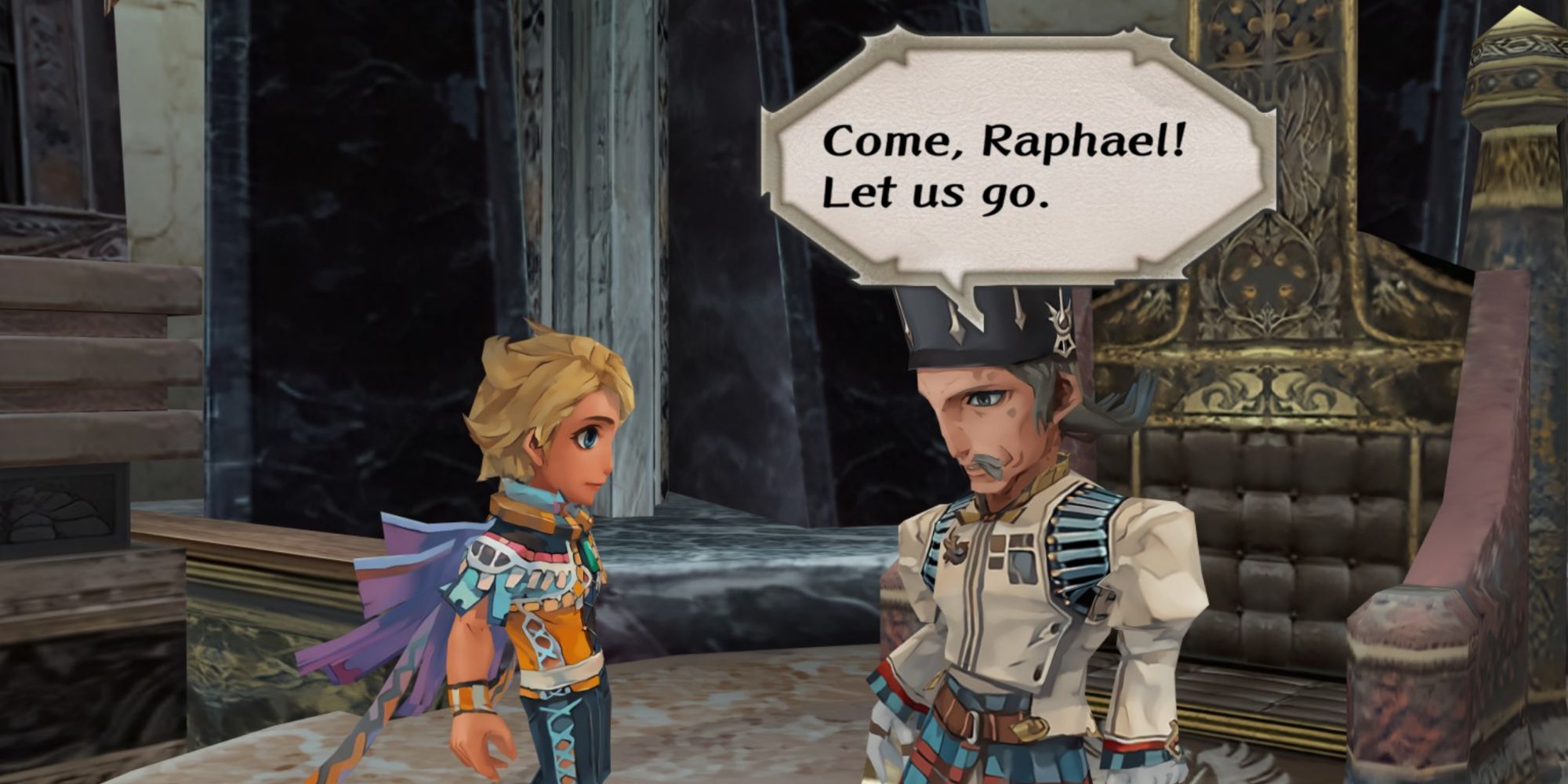 As with every other character once they complete their first quest, your first task should be start unlocking locations across the world. To do this, talk to every NPC you come across in every settlement, and recruit important characters to your party, even temporarily.​​​​​​ Important characters to look out for thanks to the large amount of locations they unlock are Barbara, Gray, and Hawke.

Some general tips for Albert: