Salt and Sacrifice is a game that will dig its claws into you and not let go. You’ll tell yourself, “I’ll just kill one more mage, then I’ll go to bed,” and three hours later, you find yourself atop a mountain of pyromancer corpses with a shiny new set of armour to show for it. And you’ll do it all over again. One more boss. One more level up. One more piece of armour to complete the set. One more secret to find before the region is complete.

The follow-up to Salt and Sanctuary has you taking on the role of a Marked Inquisitor – a criminal whose sentence is a life of combat, condemned to spend the rest of their days killing the mages who threaten society. It’s a simple hook that gets right to the point. You’re free to engage with the game’s plot to whatever extent you like. There’s a treasure trove for those who love to delve into item descriptions, but you’ll get the gist of it just by playing normally – a breath of fresh air from a game that wears its Soulslike inspirations proudly on its sleeve. Yes, the item descriptions can be vague as heck, and you’re bombarded with enough proper nouns within the first hour to make Blasphemous blush, but the puzzle pieces are put together easily enough – the game doesn’t obfuscate its lore.

Salt and Sacrifice feels like a bold iteration of Salt and Sanctuary. The art is cleaner, the controls are tighter, and the world feels more developed. The game evokes a grim tone from the off, with even the character creation process asking you to pick the crime that thrust you into this new life. After the brutal tutorial boss who is definitely impossible to beat (trust me, no one can beat it, if you say you beat it, I’ll call you a liar), you get to meet Pardoner’s Vale – your new home. It’s a Monster Hunter-style hub area with your standard merchants, equipment upgrade stations, and the magical level-up statues. From here, you can travel to the various regions of the game. 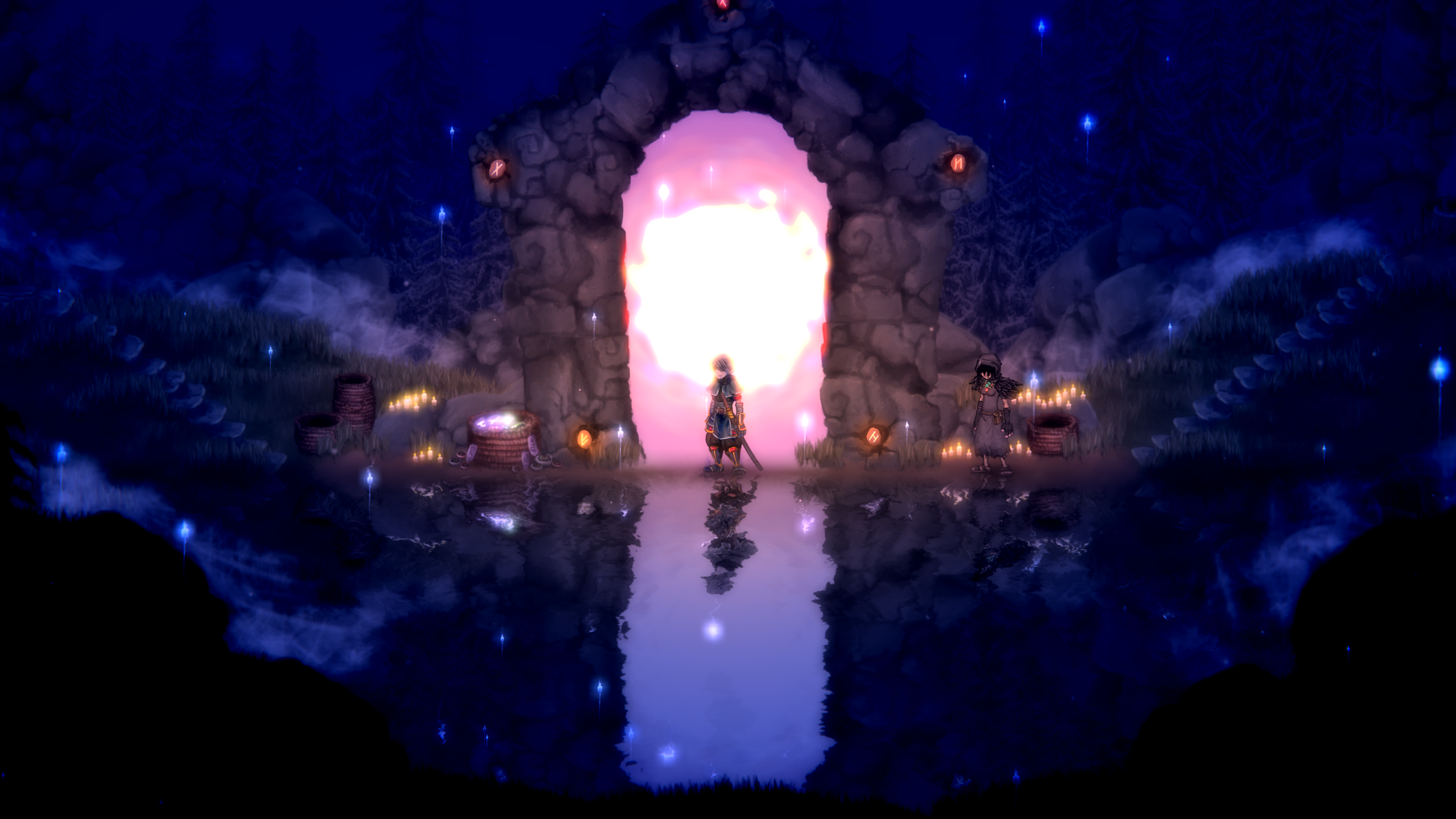 Speaking of perilous danger, this main gameplay loop is where Sacrifice sinks its claws into you. Exploring a new area always feels quite daunting, but you’ll soon track down some mages to hunt and unlock new movement abilities that let you access new areas. All the while, you’ll be fighting off aggressive enemies and taking down gruesome bosses. It’s the typical Metroidvania fare but it’s done very well. Something I appreciated a lot was how obvious the inaccessible areas were telegraphed – visible updrafts and prominent stone circles let you know that there’s something to come back to, you just need the right tools for the job first. By the end of the game, you’ll be able to grapple through the air, float into the sky on etherdrafts, and create ethereal platforms with the luminstone. Heading back with these new abilities is rewarding – there’s loot to pick up, areas to explore, and optional bosses to conquer – but also satisfying.

That said, beelining right to the end of the game would be doing the game a disservice, not least because the combat is the true highlight of the experience. There are plenty of weapons to try out and techniques to master, and finding your flow with a powerful weapon feels incredibly satisfying and natural – the game has a natural difficulty curve that makes you feel proud of your accomplishments and development. Coming back to fights that knocked me around and trouncing them thanks to better timing and a sharper eye for punishment windows evoked a satisfying power fantasy, and you can’t ask for much more in such a challenging game. 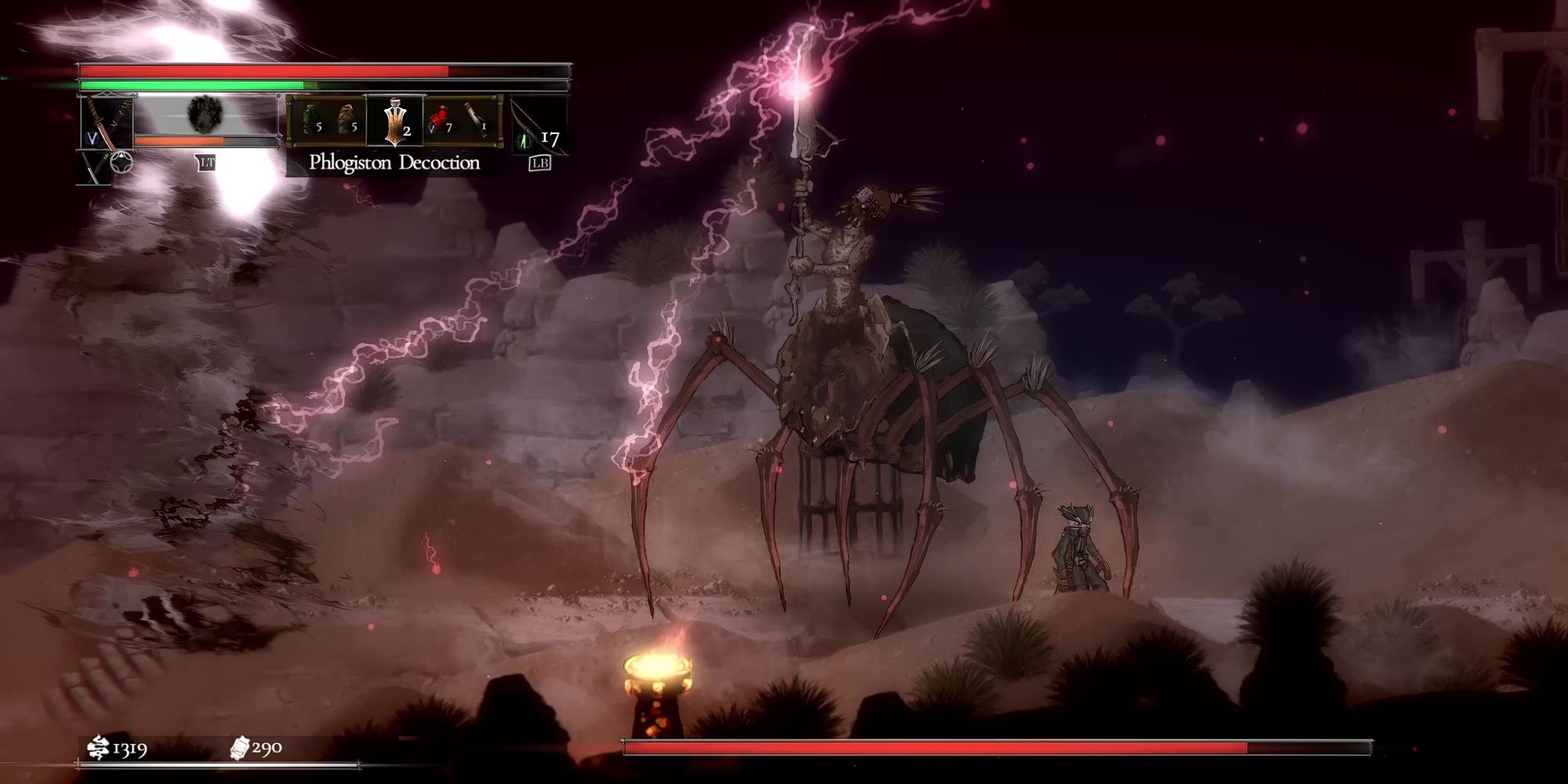 It’s safe to say that the game can be damn unforgiving in some parts, but I think that works to its credit. I can’t begin to explain how accomplished I felt when I finally slew Ekriks, the Precipice of Chaos and The Tireless Exalted – you get those lightbulb moments that make you feel like a shonen protagonist finally spotting the weak spot after an episode and a half of buildup. Sacrifice has challenges that feel like mountains to climb, not sprints to dash through. Sometimes those challenges are marred by wonky hitboxes and overpowered attacks, but with conveniently placed checkpoints and few penalties for dying, it never gets frustrating enough to put the game down. It helps that the vast majority of boss battles are interesting and unique in their own right. Having to change up your combat style because a boss uses instant-death moves or turns invisible keeps you on your toes, and getting to the inevitable duo boss only to beat them on your first attempt highlights how well the game trains you. Yes, that’s a stealth brag; I don’t care.

Something the game does to encourage this full exploration of its optional challenges is link the upgrade system to the bosses you fell. The vast majority of boss battles in the game are against mages, and only by beating a new type of mage can you unlock new equipment to craft. In this way, the Monster Hunter influence is felt pretty significantly, especially as completing a set of armour or crafting everything in the game will require a lot of grinding. Some may find this a turn-off, but it’s not required to beat the game. Those that like grinding, however, will reap the rewards.

Whether or not grinding is your thing, you can always expedite things with the help of a pal. A lot of effort has gone into crafting an interesting and involved multiplayer architecture, with multiple factions to join in the style of a Dark Souls game. There are various random PvE and PvP routes to pursue and the simple option to join a friend with a passcode. The intent here is obvious – to integrate a compelling multiplayer experience with the game's lore in an engaging way, but this is not going to be the perfect solution for everyone. Solo players might feel frustrated that after unlocking a secret new area that took 15 attempts to platform over a perilous fall to reach, their only reward is a broody NPC who lets them join the murdery chaos, obviously-evil gang. In addition, I worry that the game might not have the player base to support just how many multiplayer options there are. As segmented as they are, it may be quite a while before you get a bite.

With all of that said, it cannot be understated how compelling this game feels. It takes all the best things from its inspirations and blends them together in a way that works. It’s a game with the combat of a Soulslike, the gameplay loop of a Monster Hunter, and the exploration of a Metroidvania, all set against a beautiful backdrop – conflicting flavours that come together to form a delicious experience. It’s greater than the sum of its parts, and it’s a game I won’t be putting down for a very long time.

Score: 4.5/5. A review copy was provided by the publisher.