Sea Of Thieves is experimenting with new forms of storytelling and world-building in 2022. This is beginning with the all-new Shrouded Islands set of adventures, which are limited-time voyages that have you traveling to islands that are now covered in a dense, green fog. The story revolves around the mystery of what's happened to the Golden Sands outpost and its inhabitants as well as the suspicious disappearance of everyone's favorite ghostly, fire-bearded skull in the sky, Captain Flameheart.

This particular mission is only available until March 3rd, so if you want to begin the first part of this multi-part story you better act now. To help you get through it and reap the rewards, this guide will show you how to journey across these Shrouded Islands.

How To Complete Chapter One: Shrouded Islands 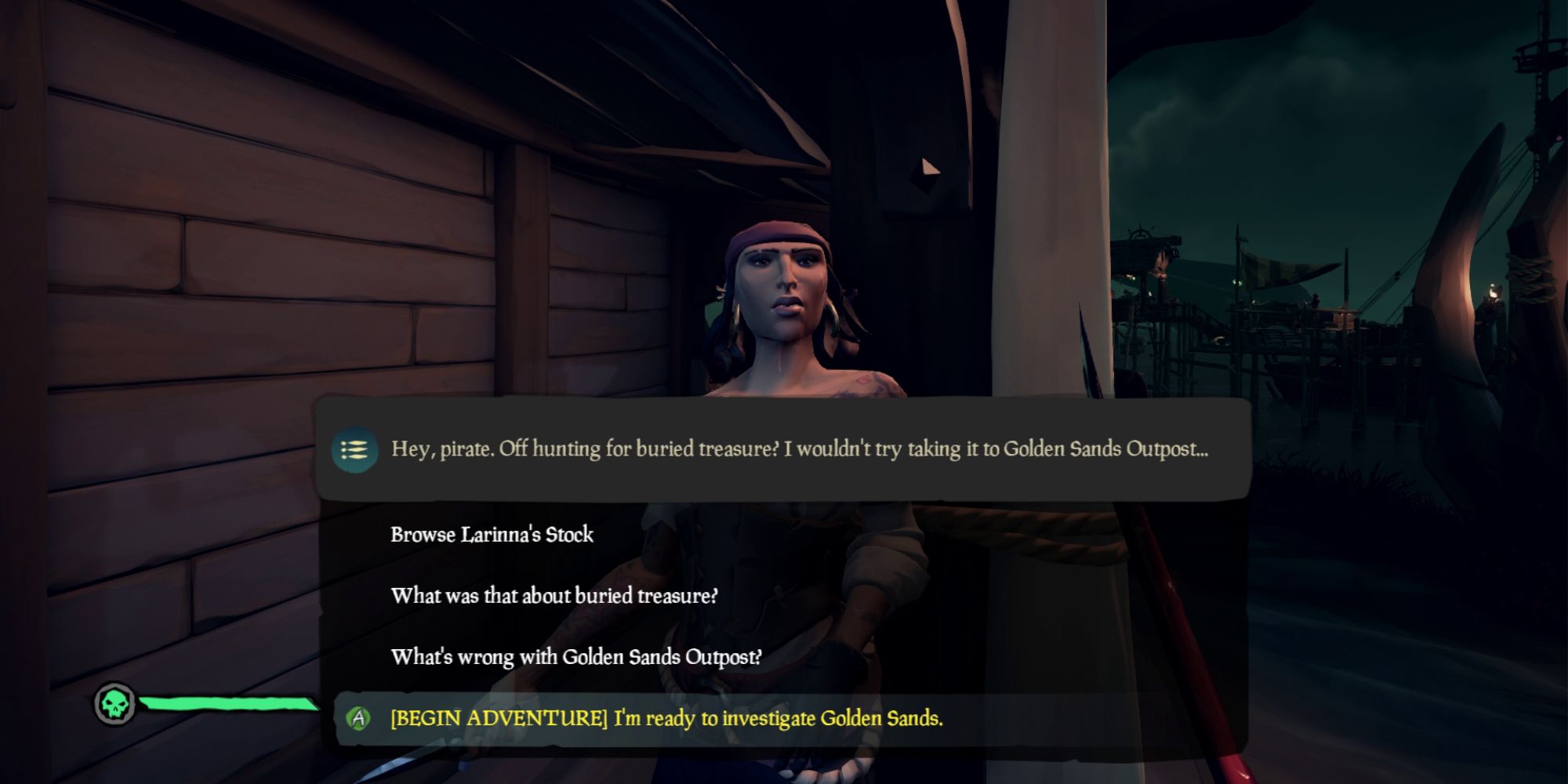 For this adventure, there are five deeds that you need to complete. You can find this list in the Adventures tab in your menu. The first thing you'll need to do is find a Mysterious Compass and return it to its owner.

When you first load into Sea Of Thieves, you should have a note telling you to speak to Larinna outside the tavern. Upon doing so, you'll see an option that says Begin Adventure at the bottom of her dialogue choices. This will unsurprisingly begin this adventure. She'll tell you that the people of Golden Sands outpost have gone missing, so it's time to head on over there.

Sail to Golden Sands, and you'll notice that it's covered in thick, green fog. You can walk around the now deserted island if you want, but where you need to go is this outpost's tavern. Inside this now silent and dark pub will be the Mysterious Compass, which will be sitting on a table to your right as you enter. After you pick it up, you'll see that it's pointing to another island somewhere beyond Golden Sands. Get back on your ship, and begin sailing to where the compass is telling you to go.

We're not sure if the destination ever changes, but in our experience, the compass seems to always point you towards Crescent Isle. When you get there, you'll find another island covered in fog. When set foot upon Crescent Isle, the compass should point you towards its owner: a mysterious woman named Belle. Talk to her, and she'll tell you that some unknown presence from the Sea Of The Damned is invading the Sea Of Thieves. She tells you that you're going to have to work with her to figure out what's going on. At the bottom of her dialogue choices will be the option to Complete Chapter, which will finish chapter one of this adventure. To begin chapter two, talk to her again, and the option to Continue Adventure should be available to select.

How To Complete Chapter Two: The Shipwreck Saviour 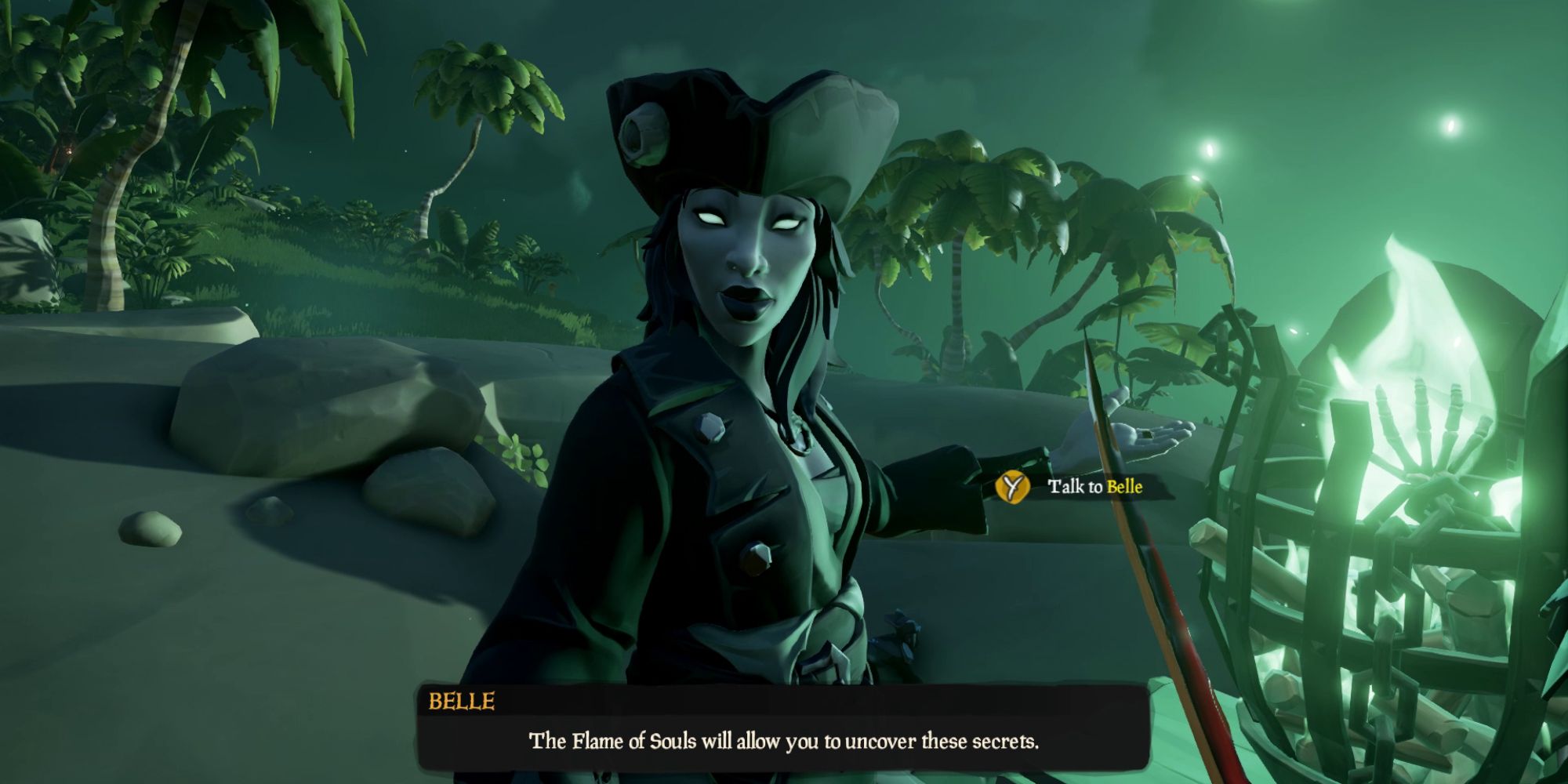 Chapter two will have you investigate the latest Shrouded Island. You'll need to take out your lantern, use it to take the nearby Flame Of Souls off the brazier beside Belle, and then sail to an island in The Wilds that is covered with the green mist. Again, it may be different for some players, but every time we tried it the island turned out to be Shipwreck Bay.

You'll notice some Spectral Ships when you arrive at the Shrouded Island, but don't worry as these vessels won't attack you. What you need to do is light eight braziers scattered around the island with the Flame Of Souls that you're carrying inside your lantern. Doing this will show you eight memories tied to The Reaper's Bones trading company, the Servant Of The Flame, and Captain Flameheart. Seeing all eight of these memories is another one of the deeds you need to complete. To find these braziers, you'll see ghostly figures pointing in their direction throughout the island. While you're setting things on fire, you'll be occasionally attacked by Reaper Phantoms, which are a special variant of the phantom enemy type (regular phantoms, ocean crawlers, and skeletons will pop up too.)

The next deed on the list is to "light a flame that begins a dark ritual." This has to be done after you've lit all eight braziers and witnessed the memories. You'll need to light one last brazier, which will be in a cage with some bones inside of it that looks like this: 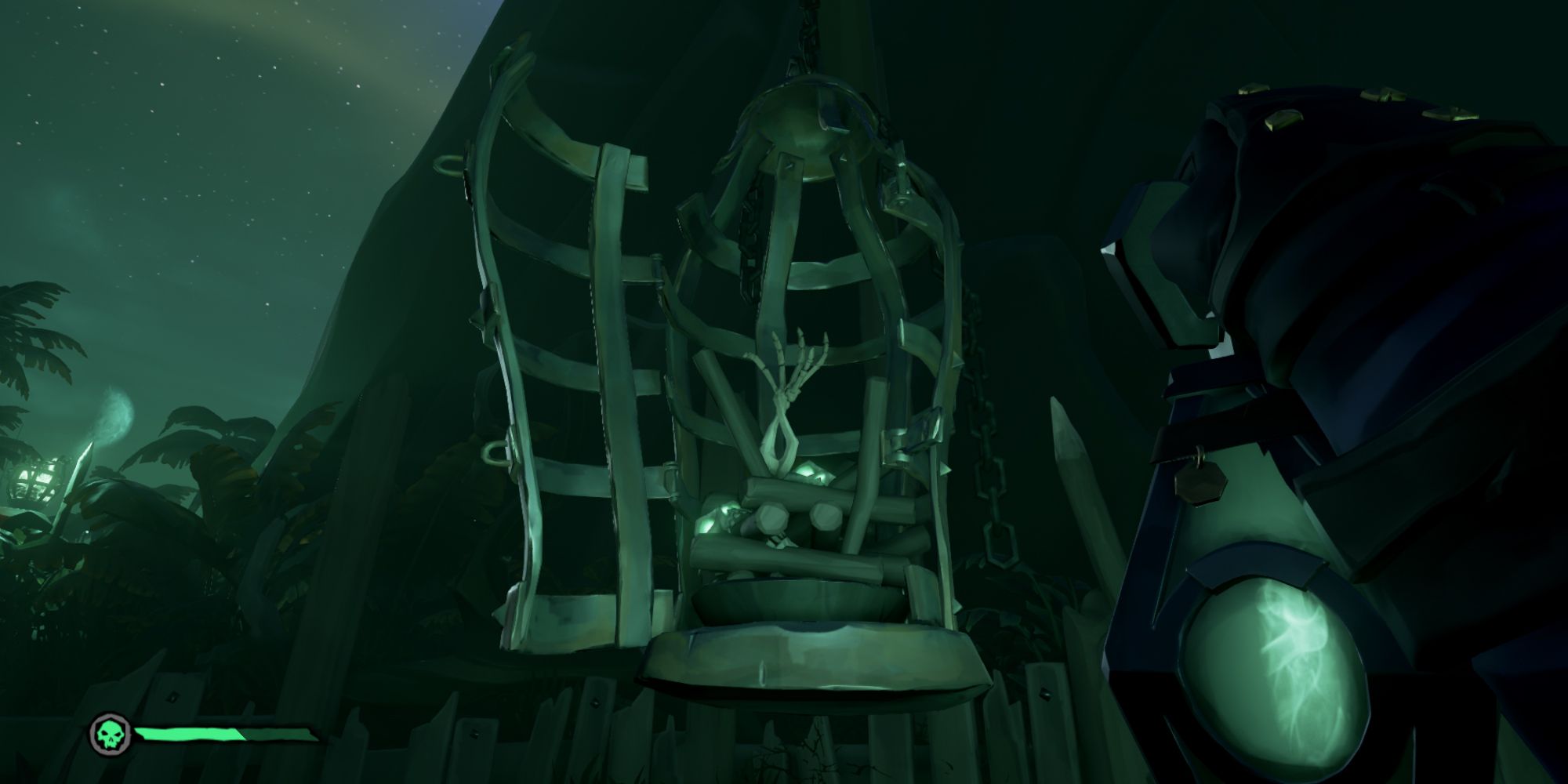 Light this brazier with your lantern, and you'll now have to fight waves of Reaper Phantoms. It shouldn't be too hard as ghostly barrels, gunpowder barrels, and a spectral cannon will appear to help you with this fight. After defeating enough Phantoms, you'll have a boss fight with an enemy called the Soulflame Captain. He can be a bit difficult as his melee attacks hit hard, and he has a charge attack that can knock you back. However, if you shoot him with the cannon, or blow him with bombs and gunpowder barrels, he shouldn't be too tough to defeat. When he's done and dusted, he'll drop a map that will lead you to a relic that Belle needs for her research.

It's worth pointing out that one of the five deeds tasks you with finding a Rune Tablet and giving it to Belle. Oddly enough, when we ran this adventure, we were able to complete it and receive the rewards without giving her this item. But if you're a bit of a completionist and don't want to leave one of the deeds unfinished, these Rune Tablets are randomly dropped by the Reaper Phantoms you fight on the Shrouded Island. They may drop a few of these, and you can sell them to Belle the next time you see her. They're only worth about 1000 gold each, but it could prove to be profitable if you can get a bunch of them.

The last deed requires you to find an item called a Hexing Skull and give it to Belle. This is the relic that the map dropped by the Soulflame Captain is leading you to. Every time we did this adventure the map led us to Marauder's Arch, so we're assuming that's where you'll always need to go. Sail over there, follow the map to the location of the Hexing Skull, and dig it up. Belle will be on this island as well, so find her and hand her this relic. You'll then have two additional dialogue options with Belle. You can select Continue Adventure if you want to head back to the Shrouded Island to gather more Rune Tablets, or Complete Adventure if you want to do what the option says and complete the adventure.

As a reward for finishing the Shrouded Island adventure, you'll receive a new, glow in the dark compass called the Shrouded Compass. You'll also be granted the title of Seeker Of Shrouded Souls, which is a fun little moniker.

As for future adventures, it seems like more will be coming in the not-so-distant future. Rare has stated that they're planning to add more of these types of events throughout the year that will add subtle changes to Sea Of Thieves' world similar to Golden Sands' current foggy state. We're likely to hear more about these events after season six hits next month, and we'll have more coverage and guides to help you continue being the best pirate you can be.