Shadow Warrior 3 is here and it features a treasure trove of different yokai for ninja protagonist Lo Wang to go up against in fast-paced, first-person combat that is strikingly similar to Doom, but with a katana.

With so many different enemies to kill, you're going to need a roster of powerful weapons. Shadow Warrior 3 features seven different weapons for the player to use and you'll unlock them at different points in the story. Each weapon also has an upgrade tree that changes the the gun's attributes. You'll need a total of seven weapon upgrade orbs to fully upgrade each gun.

How To Unlock Every Weapon In Shadow Warrior 3 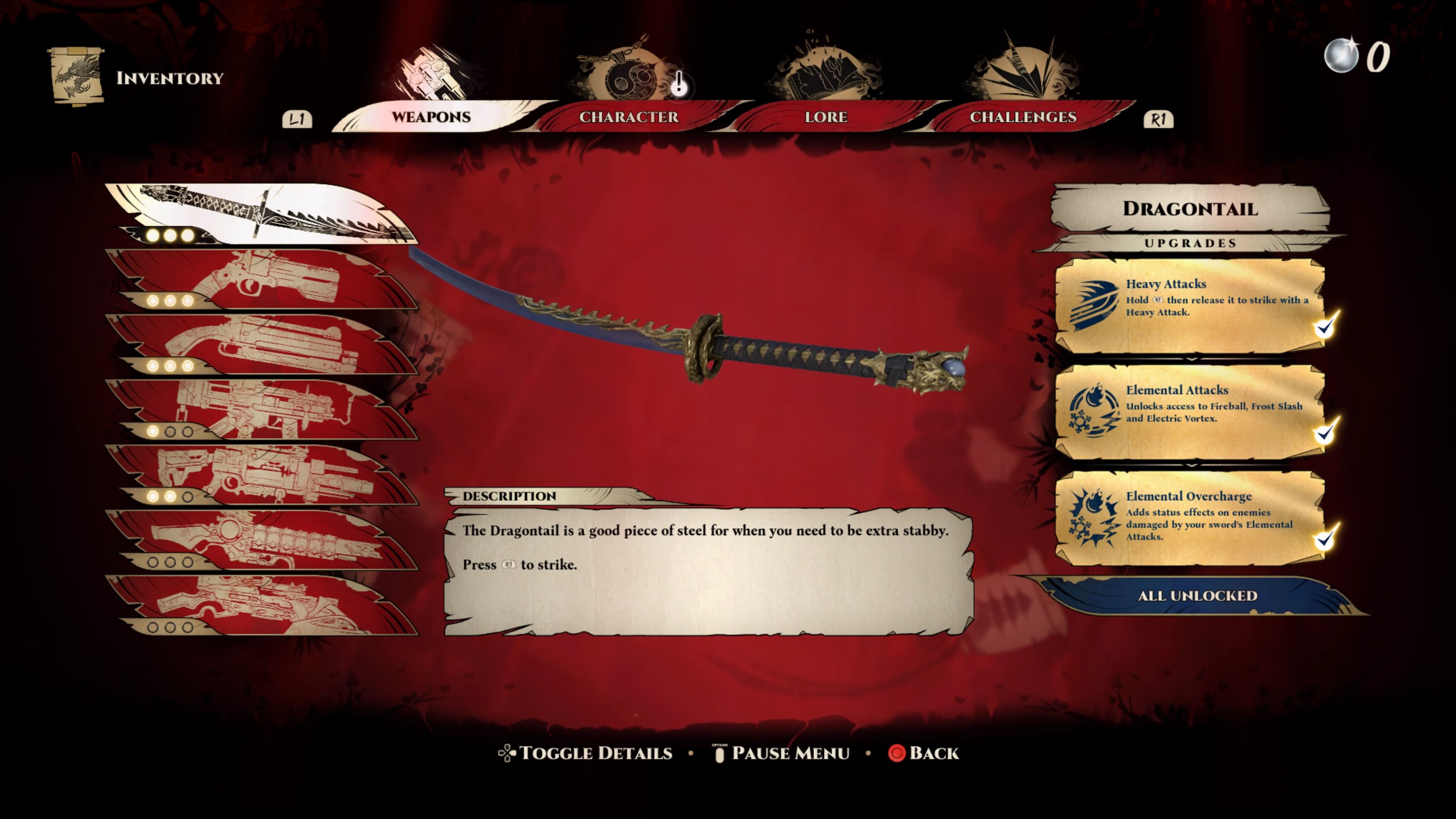 The Dragontail is one of the default weapons you start with in Shadow Warrior 3. As such you'll have it unlocked from the start of the game. Its first upgrade lets you use heavy attacks, while the second and third focus on adding elemental attacks to your directional heavy strikes, which is handy for some of the elemental achievements you can unlock. 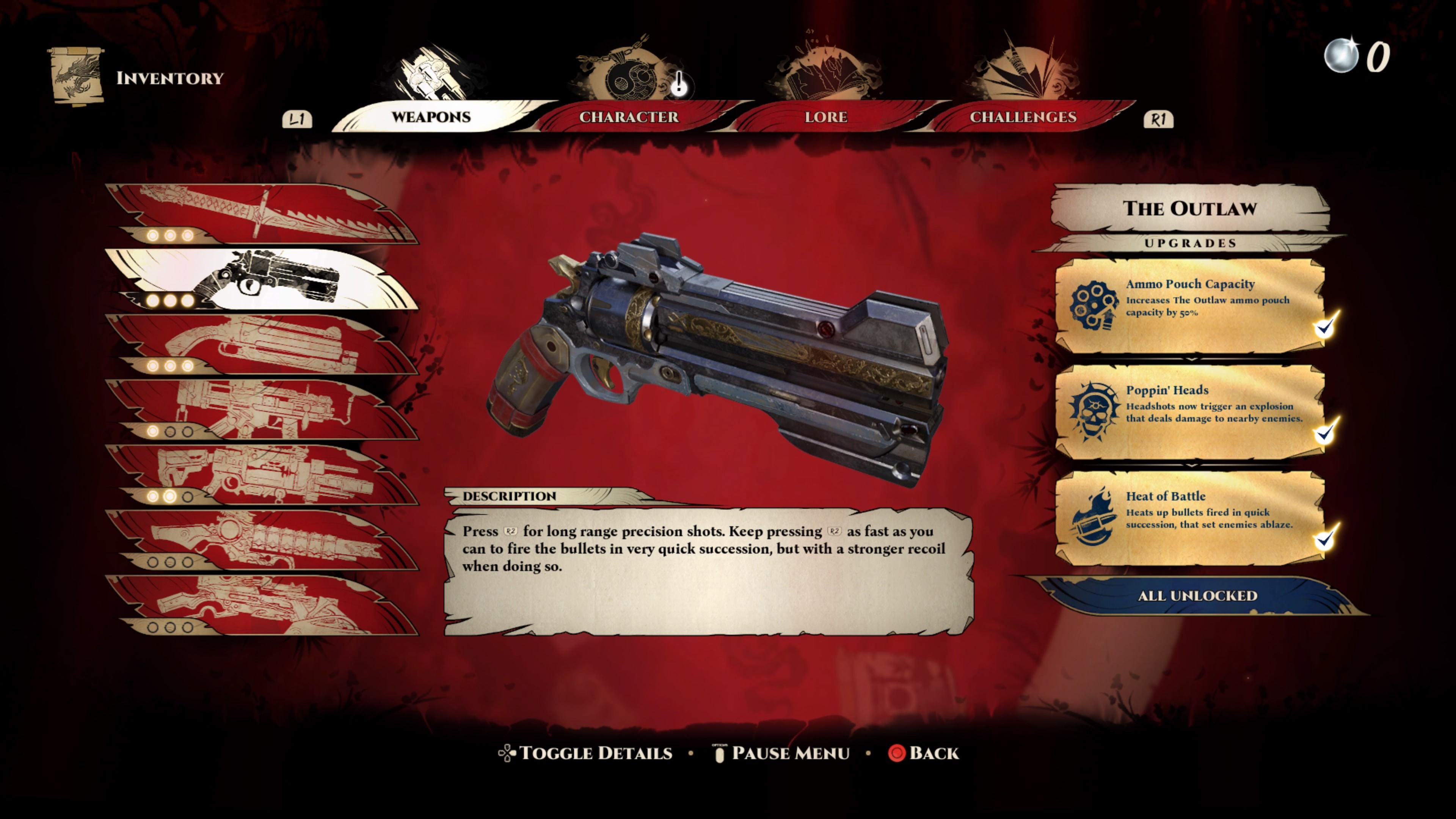 The Outlaw is another one of the default weapons you begin the game with, and you're able to use it within the first level. The first upgrade for The Outlaw lets you increase the ammo capacity by five percent. The second upgrade makes it so that headshots will trigger explosions that deal damage to enemies. The final upgrade will light your bullets on fire if you shoot in quick succession. 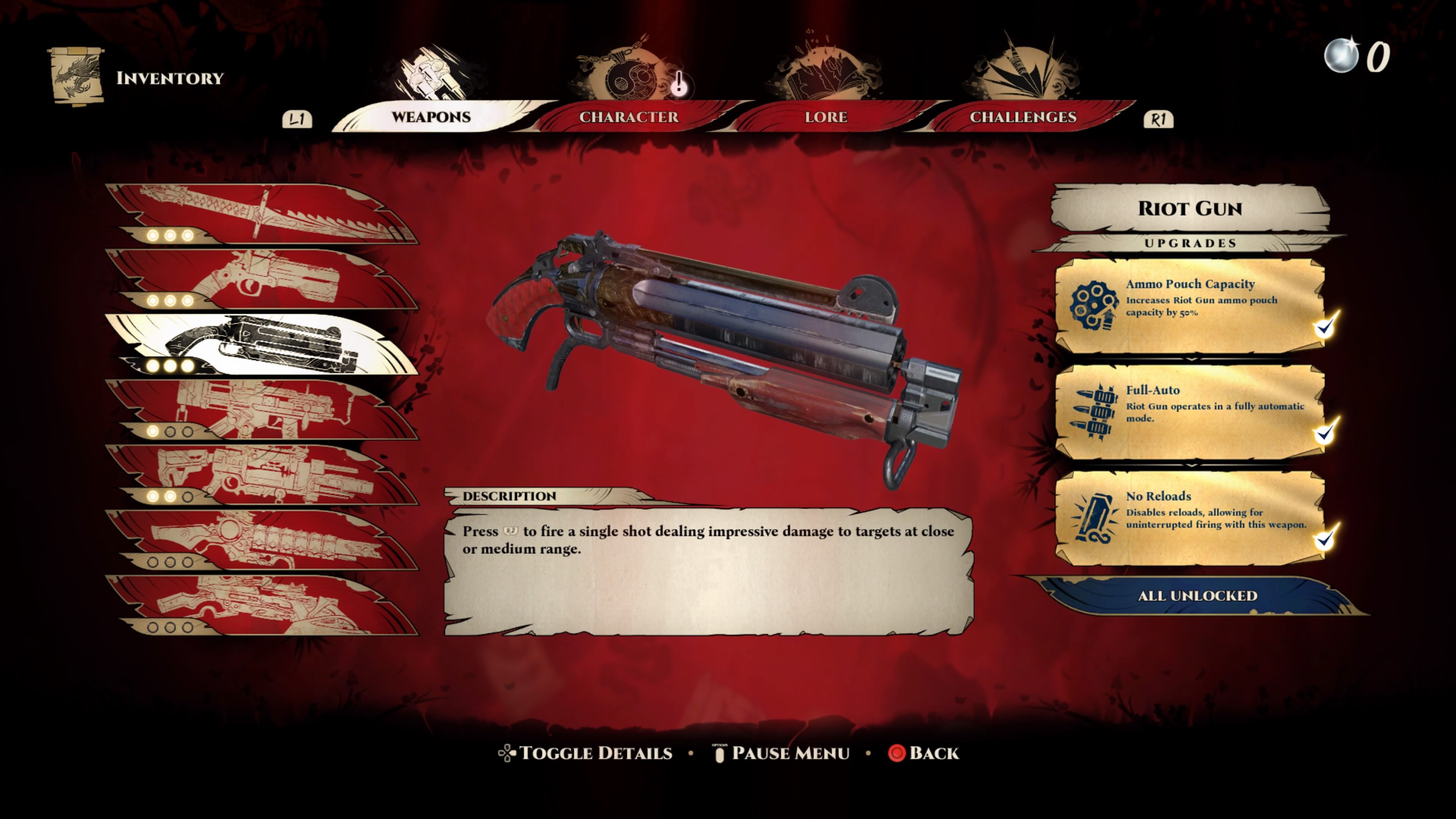 The Riot Gun is a shotgun that you'll unlock during the game's first level. You don't start out with it, but you'll get it soon after starting the mission. Its first upgrade lets you upgrade the ammo pouch by five percent. The second upgrade makes the shotgun full-auto so it fires much quicker, while the final upgrade lets you use the Riot Gun without having to reload. 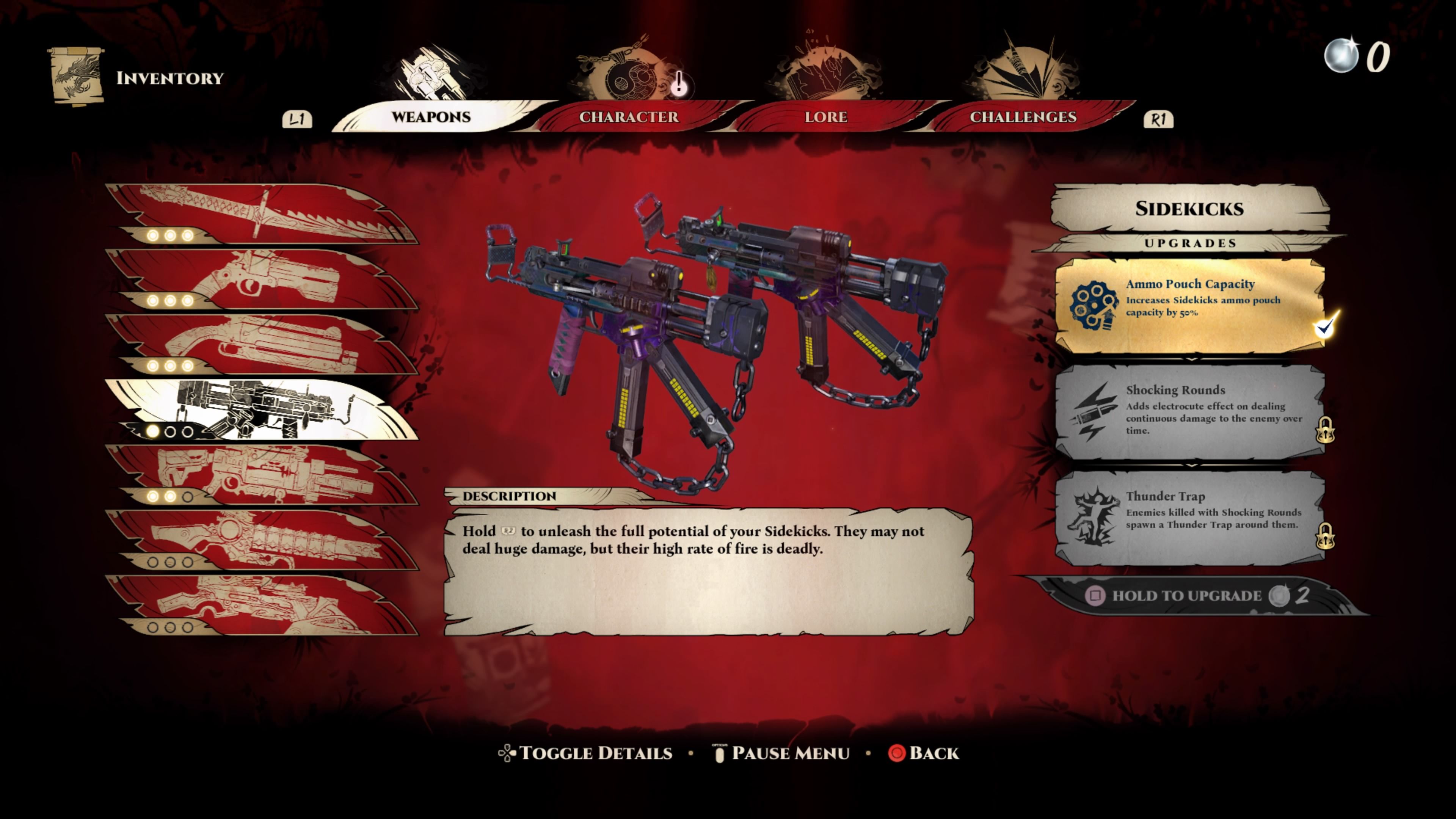 The Sidekicks are dual uzis and the best weapon in Shadow Warrior 3. You'll unlock them right at the start of the game's second level. The first upgrade, much like the others, increases the ammo pouch by five percent. The second upgrade adds an electrocution effect if you shoot enemies long enough and the final upgrade turns killed enemies into a thunder trap. 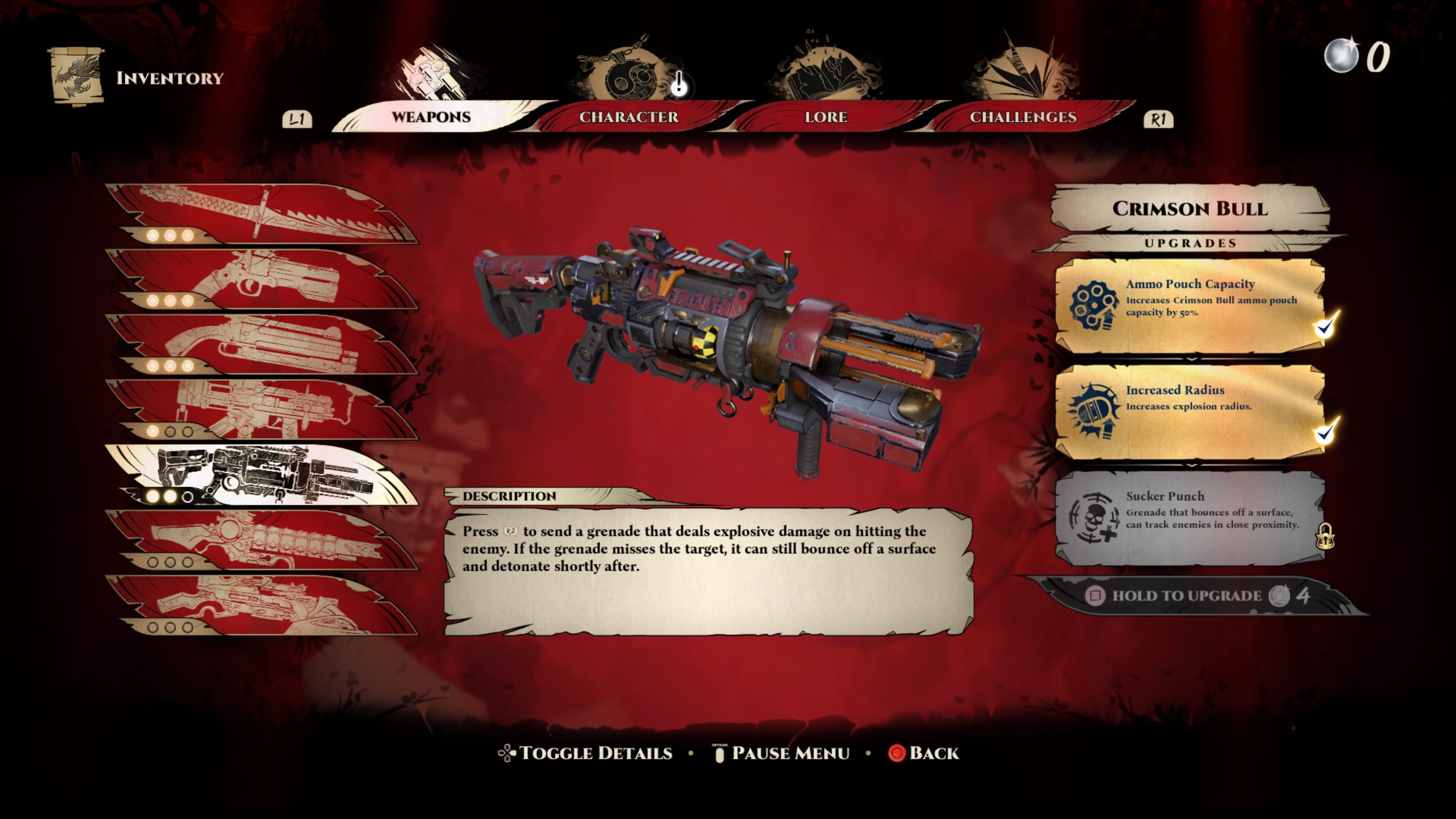 The Crimson Bull is a grenade launcher that you can unlock in the third level while you're chasing the Tanuki. The first upgrade for the Crimson Bull increases the ammo capacity by five percent. The second upgrade will increase the radius of the explosion while the final upgrade makes the weapon's grenades bounce and home in on nearby enemies. 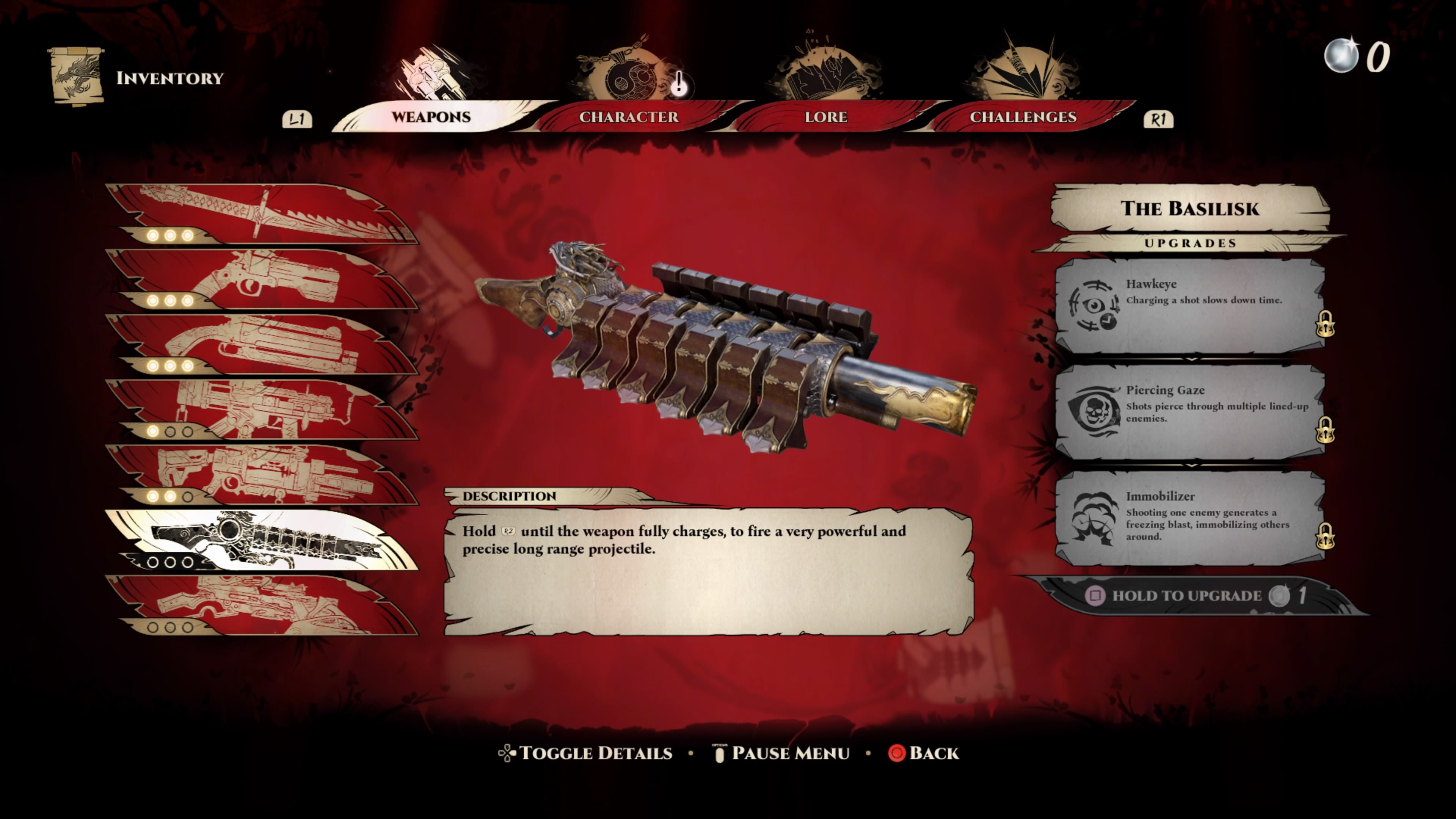 The second to last weapon in Shadow Warrior 3, The Basilisk, is a rail gun that can be unlocked towards the end of the fourth level. The first upgrade will slow down time when charging a shot, the second will make it so that shots can pierce more than one enemy in a row. The final upgrade will add an ice element to shots, freezing any enemies in the area. 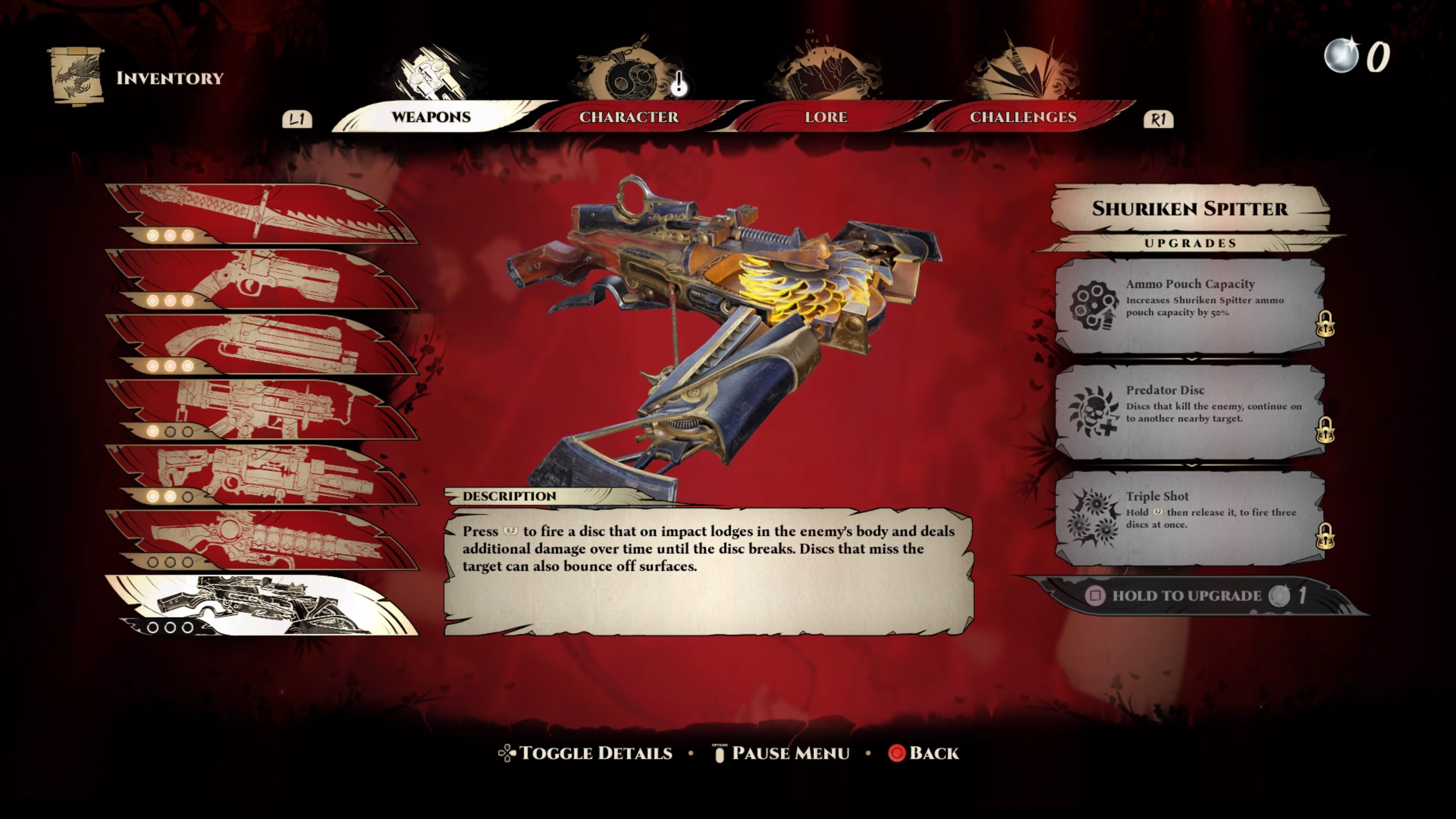 The Shuriken Splitter is the final weapon you'll unlock in Shadow Warrior 3 and as the name implies, it's a gun that'll shoot out shurikens. You'll find it at the start of the fifth level. The first upgrade increases the ammo capacity by five percent, the second will turn the shurikens into predator disks that go through targets and kill more, and the final one lets you shoot out a triple shot of shurikens.