Slay the Spire is a hard game and requires a lot of skill in order to beat it. Of course, as a roguelike game this is to be expected, but you won't be able to succeed unless you have a good grasp of each of the game's four characters and how best to build decks for them.

The Silent has the largest starting deck in the game, consisting of twelve cards, and has the incredibly powerful Ring of the Snake relic that allows her to draw two extra cards at the start of each fight. Using the right builds can make her unstoppable though, and we've got some of the best builds for the Silent right here.

How To Build Decks For The Silent

The key to deckbuilding in Slay the Spire is not to choose a deck you want to build beforehand, but instead to work with the cards and relics the game gives you, and picking cards that synergise well with whatever good cards and relics you get offered early in the run.

For example, if you get a Specimen and a Deadly Poison within the first few floors, it's probably a good idea to focus on picking cards that work well with poison when building the rest of your deck, even if you wanted to do Shivs. The nature of RNG means you might never see the cards you want to see, so it's always best to just play the hand you're dealt.

The Silent has plenty of access to draw, so any size of deck can work, but as with the other characters, making sure there's no filler by removing useless cards like Strike once you have a deck up and running is key, as there's nothing worse than drawing an ineffective card on a crucial turn.

One of the Silent's main builds utilises the poison mechanic. A poisoned enemy takes damage equal to the amount of poison they have at the end of your turn, and then their poison value decreases by one. Poison can be a very effective way to deal huge damage, and its damage-over-time nature can be brilliant for letting you focus on defence.

The best cards for inflicting poison are:

Poisoned Stab is another option, but it's preferable to avoid this, as it's an attack, which ruins one of poison's big advantages in that it relies solely on skills.

The true key to a poison deck, however, is Catalyst, a skill that doubles (triples when upgraded) the amount of Poison an enemy has.

This is very strong on its own, and even better when paired with Burst, which plays the next skill you play in a turn twice, and Nightmare, which lets you choose a card from your hand and then adds three copies of that card into your hand the following turn. Assuming you play all three Catalysts the next turn, you can multiply an enemy's poison by 27!

Defence-wise, by far the best card for any Silent deck is Footwork. This gives you two dexterity (three when upgraded) – a buff that increases the block gained by cards by the amount of dexterity you have.

With a few Footworks in play, even Defends will be blocking in the double digits. Good block cards to look out for are Dodge and Roll, which also gives you block next turn, Survivor, which gives good block in exchange for discarding a card, and Backflip, which gives draw in addition to block. The Silent doesn't really have much deck-specific block, so these principles are true for all the decks in this guide.

One non-block option for defence is Wraith Form, which instead of block, gives you two (three upgraded) intangible. Intangible reduces all damage taken to one for as many turns as you have intangible.

The drawback of Wraith Form is that once you play it, you start losing one dexterity per turn, meaning you need to go all-in on intangible, as your block cards will quickly become useless.

Because of this, you really need multiple Wraith Forms to rely on this strategy for longer fights. You could also try using an artifact to negate the dexterity reduction if you're lucky enough to have Clockwork Souvenir, though since that's the Silent's only way to gain artifacts, this is a very unlikely tactic.

In terms of relics, Art of War is nice, as poison doesn't really rely on attacks, so it's essentially free energy every turn. However, the big two for poison are the Snecko Skull and the Specimen.

The former applies one additional poison whenever you apply poison, providing a nice boost, and the latter makes it so that when a poisoned enemy dies, their poison value is transferred to another random enemy, making poison more viable for multi-enemy fights.

Another way of doing this is with the card Corpse Explosion, which applies poison and makes it so that when that enemy dies, all enemies take damage equal to the dead enemy's max HP – a valuable card in any deck, really. 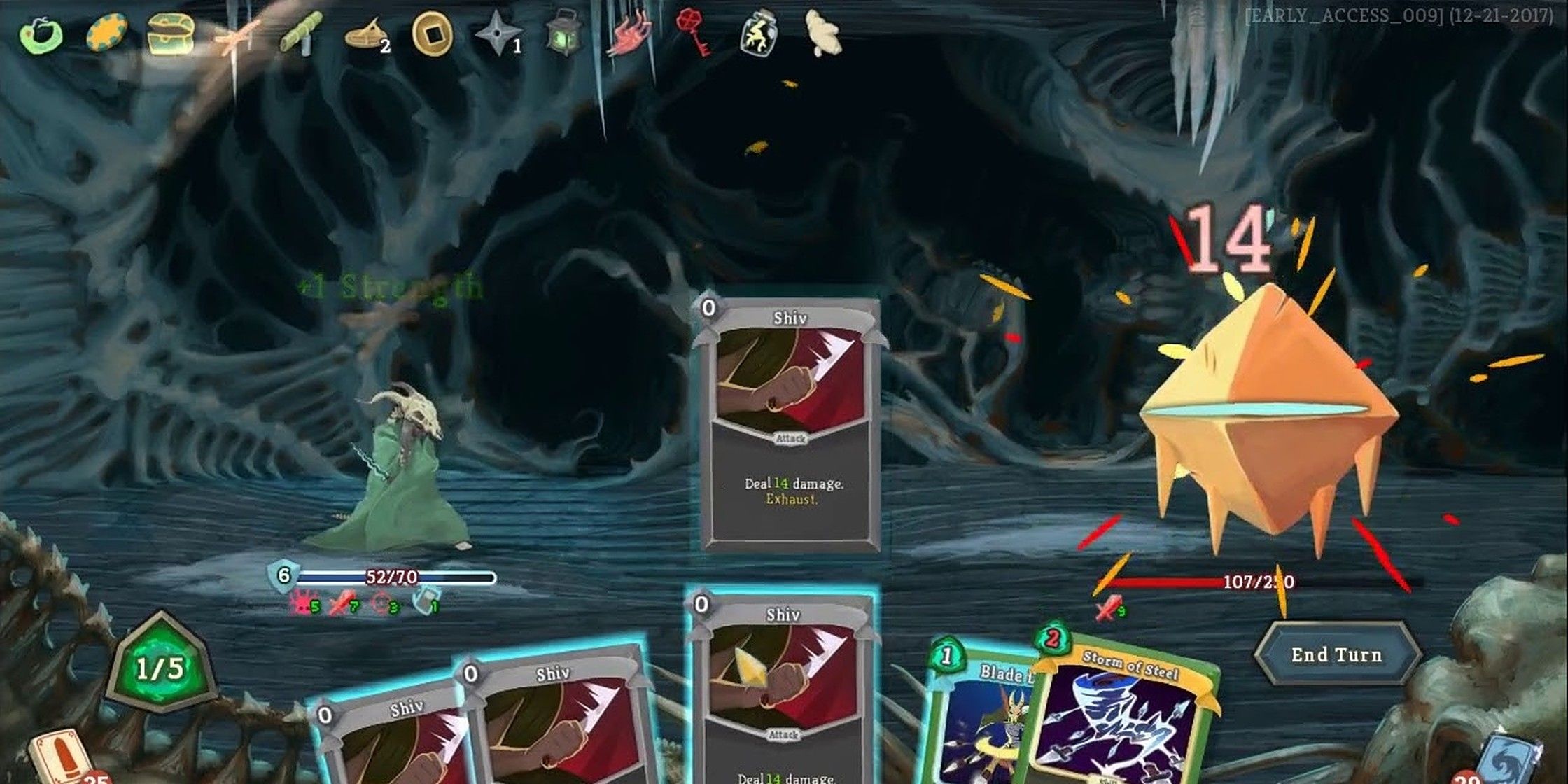 Shiv builds take advantage of the zero-cost card Shiv, which the Silent has a few ways to add into her hand. Blade Dance simply adds three (four upgraded), while Storm of Steel discards the entire hand and replaces it with shivs, working well if you can draw for a bigger hand.

Infinite Blades, meanwhile, adds one Shiv into your hand at the start of each turn, and Cloak and Dagger provides block (good with Footwork) while adding one (two upgraded) Shivs into your hand.

Shivs deal four damage by default, but this can be increased by Accuracy, which, when played, increases Shivs' damage by four (six upgraded) for the rest of the fight. And this stacks, so if you can get three upgraded Accuracies, each Shiv will deal 22 damage, meaning Blade Dance+ deals a whopping total of 88 damage for one energy.

One defensive option that works uniquely well with Shivs is After Image, which gives you one block for every card played. Since you play an unparalelled amount of cards when running Shivs, this can really stack up.

This massive amount of card usage is also what makes Shivs synergise well with the ninja relics – Shurkien and Kunai. When you play three attacks in a single turn, these relics give you one strength and one dexterity respectively. Given how many Shivs you can play in a turn, it's easy to rack up multiple points of both if you're lucky enough to get your hands on these relics.

Another great relic is Wrist Blade, which you can find after boss fights. This serves as a free Accuracy, granting four additional damage to any attacks that cost zero energy.

One more mitigative option that fits into any deck but might as well be mentioned here is Malaise, which permanently removes strength equal to however much energy you have when you play the card from the enemy, and applies that much weak as well. Similarly, Piercing Wail removes six (eight upgraded) strength from the enemy, but restores it after their turn.

Grand Finale is something of a meme build, but it can be fun to make work, and it's worth talking about because it's a good way to explain one of the Silent's best assets in any deck – her brilliant access to draw and discard.

Deck manipulation is very powerful in Slay the Spire, and the Silent has a vast number of cards that can cycle your deck faster than simply waiting to draw a new hand each turn.

In any deck you build, this is great for allowing you to see more useful cards quicker – getting extra block on turns you're being attacked, or drawing extra attack on turns where you can capitalise on enemies that aren't attacking you.

Calculated Gamble is a particularly strong card that does this, discarding your entire hand and drawing however many cards you discared. Backflip and Prepared are also good draw options, and Adrenaline is a must-pick for any deck, as it gives you energy as well as draw.

Furthermore, Silent has several cards that synergise specifically with discard – Tactician and Reflex give you energy and draw respectively when discarded, and Sneaky Strike is an attack card that refunds its cost if you've already discarded a card that turn, making it a good early game pick if you have a lot of discard.

There are a ton of cards that have discard as a secondary effect – many block cards you'd be using with Footwork, as well as the likes of Storm of Steel, so these synergies are useful to be aware of.

There are even relics that synergise with discard – Tingsha deals three damage to a random enemy whenever a card is discarded, Tough Bandages gives you three block whenever you discard a card, and Hovering Kite gives you one energy the first time you discard a card each turn.

As for Grand Finale, it's free a card that deals a massive 50 damage to all enemies, but can only be played if there are no cards in your draw pile. This is why all the Silent's draw and discard are useful for this deck, as you can manipulate this situation to happen far more easily than just waiting for a miraculous draw.

One card to note is Well-Laid Plans, a power that lets you retain one card each turn, carrying it over to your hand next turn instead of discarding it. This is useful in any deck, but if you draw your Grand Finale early, Well-Laid Plans lets you hang onto it until you've emptied your draw pile.