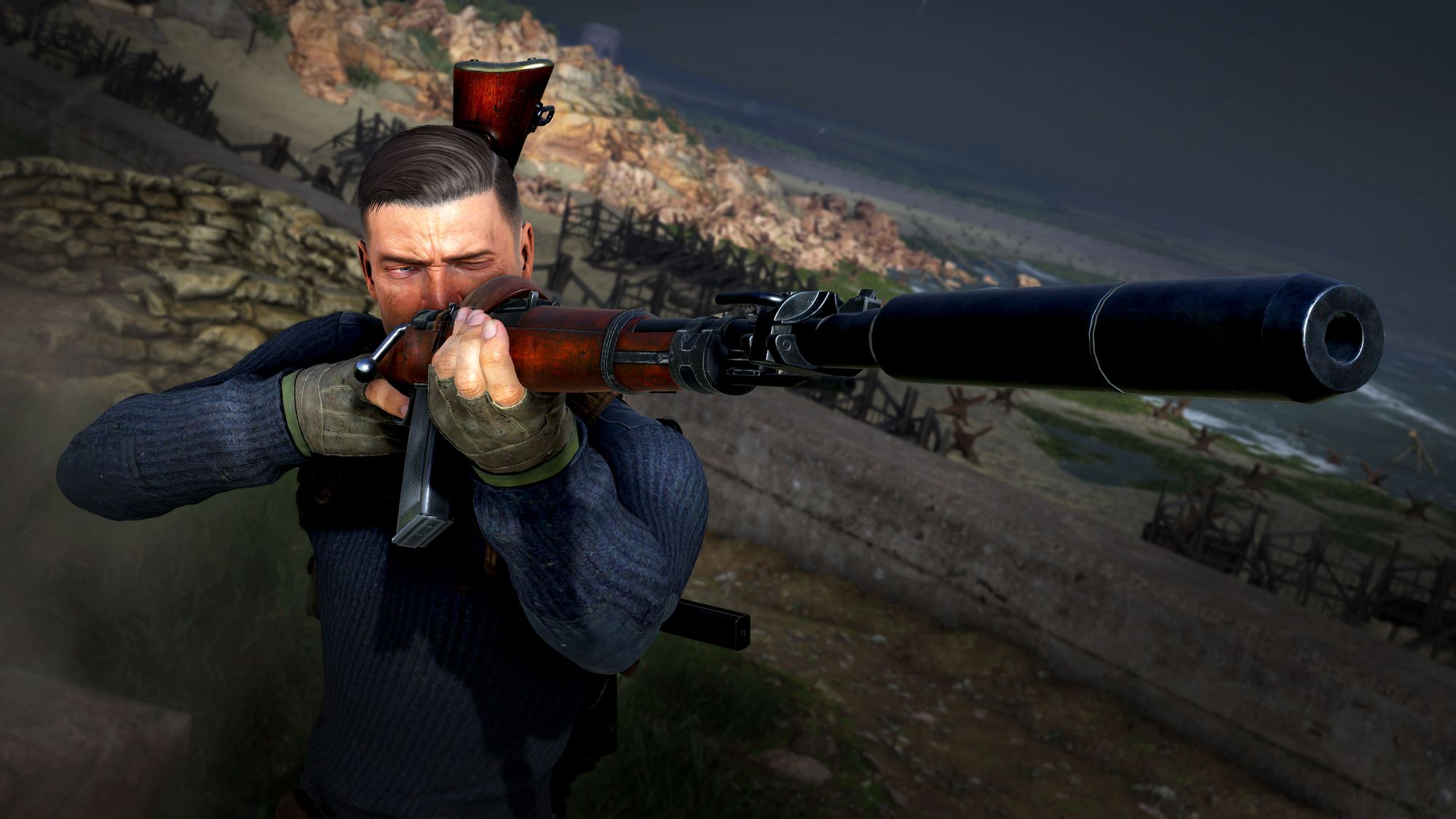 Rebellion’s WW2 era sniping simulator heads to France in 1944, and it’s more realistic, versatile, and gory than ever.

Any video game franchise that’s reached its fifth iteration must be doing a number of things right, developing a loyal and enthusiastic fanbase with each new instalment. Sniper Elite is not necessarily one of the games industry’s biggest beasts but as a franchise it has been around since 2005, rendering it an institution of sorts. Now, Oxford-based developer/publisher Rebellion is preparing to release Sniper Elite 5 and we’ve had an early sneak peek.

To be precise, we played through one of the game’s missions (twice within the allotted time period of just over two hours) on a PC equipped with an Xbox One gamepad, via the game-streaming service Parsec. Even such a restricted playthrough was enough to illustrate how the franchise has persisted for 17 years, quietly but steadily improving each time.

Before we jumped into the hands-on preview, various members of the development team talked us through what is new for Sniper Elite 5. One key factor went unsaid: the relentless march of technology inevitably brings with it game engine improvements, resulting in upgraded graphics and artificial intelligence.

Rebellion was keen to highlight two particular areas of improvement, starting with the new-found ability to customise every component of every weapon, such as stocks, barrels, magazines, and sights. On top of this is a greater emphasis on authenticity, manifested in the use of photogrammetry to reconstruct real-life buildings and environments as they would have been during the game’s time period – including collaborations with the likes of the Imperial War Museum to further ratchet up the level of authenticity.

Sniper Elite has always been primarily a third person shooter, with an added first person element which kicks in when you look down the sights of your trusty sniper rifle. Sniper Elite 5 takes a step further towards mixing third person and first person action: it’s the first game in the series that allows you to drop into a first person view by peering down the iron sights of all the other weapons it contains, such as handguns and machineguns.

Story-wise, Sniper Elite 5 covers a very specific period in the Second World War: France in 1944, spanning a period from just before D-Day took place to after the Allies made their famous landing. Once again, you play as Karl Fairburne, U.S. Ranger and sniper extraordinaire, operating essentially as a one-man army behind enemy lines.

The game begins with Fairburne sabotaging the Atlantikwall defences installed by the Nazis on the Brittany coast, before he hooks up with the French Resistance and drops into a storyline involving the game’s principal baddie, SS Obergruppenführer Abelard Moller. Moller is in charge of a secret project called Operation Kraken, and it’s up to Fairburne to find out what that entails and how to sabotage it.

The preview playthrough consisted of one mission from early in the game, entitled Occupied Residence. Before jumping in, we were given the option to change our weapons loadout but stuck with the defaults (sniper rifle, sub-machinegun, and silenced pistol).

A cut scene lays out the background for the mission. Fairburne, in the company of a British SOE operative, arrive at a clearing in the woods for a meeting with the French Resistance. There, we learn that Moller was the man responsible for a number of local atrocities, and that he has commandeered the nearby Chateau de Berengar to use as his headquarters.

Moller is rumoured to be heading up a secret Nazi project, so Fairburne is asked to break into the chateau, find Moller’s office, and gather all relevant intel; Moller and his entourage are currently elsewhere and the chateau is meant to be lightly guarded as a result. After the cut scene finishes, Fairburne’s companions continue their conversation, which adds a pleasantly natural touch, as a scout reports in from the chateau with some more useful information about how Fairburne can approach his mission.

Jumping into Sniper Elite 5’s gameplay, it becomes obvious that Rebellion, unsurprisingly, hasn’t deviated significantly from what was on offer in previous games. However, there is plenty of tweaking and refinement: this fifth iteration is by far the most visually impressive, with particularly convincing modelling of the general environment and the local flora. Some of which proves handy as a means of concealing Fairburne, as he stealths his way towards the chateau.

As in previous games, the way in which you approach a mission is left completely up to you: you have a detailed map, along with Fairburne’s binoculars for scouting ahead, but the levels themselves are large (larger than previous games, if the mission we played in Sniper Elite 5 is anything to go by) and studded with secrets and collectibles, so exploration pays dividends.

After creeping towards the chateau (carefully hiding from passing enemy vehicles, which stop and attack you if you enter their sightlines) we soon came across a couple of enemy guards, providing an excuse to get out our sniper rifle. As you would expect, Sniper Elite 5’s sniping engine is as well developed as ever, and the franchise’s notorious killcam – providing an x-ray view of which enemy organs your bullet penetrates and which bones it bounces off – is even more startlingly and gruesomely detailed.

Running towards the sniped enemies to loot them (a familiar requirement for a Sniper Elite game, if you are to maintain a decent stock of ammo, grenades, medkits, and so on), we encountered some enemy reinforcements who we dispatched with the sub-machinegun. Sniper Elite 5’s new-found ability to look through all guns’ sights proves very handy with the silenced handgun, rendering single-shot headshot kills considerably easier.

Reverting to stealth mode, we edged closer to the chateau, trying to stick mainly to stealth takedowns on the way, in order to avoid attracting attention. If you have played a Sniper Elite game before, you’ll be acquainted with the franchise’s pretty rigorous level of artificial intelligence, which will see you being quickly swamped by enemies if you go loud, and that key gameplay pillar is still evident in Sniper Elite 5.

The chateau itself is surrounded by a dry moat, so we descended into that, finding an armoury. After we had dealt with its inhabitants (and hidden the bodies in handy Hitman style crates) we discovered another new addition for Sniper Elite 5: a workbench, on which we could upgrade each element of our weaponry. In practice, having just started playing the game, we lacked the necessary blueprints and resources to perform any meaningful upgrades, but we could see that the system was impressively comprehensive, allowing you to tweak every component of your weapons.

Rebellion has added extra means of traversal to the game too, including vines – one of which we shimmied up to enter the chateau proper via a window (you also find rare but handily placed zip-lines, which are useful for fast getaways).

Once inside the chateau, further advances became apparent: the sound of enemy footsteps and conversations enabled us to pinpoint incoming Nazis and take them out stealthily. Again, it was important to hide the bodies, to keep patrolling soldiers from raising the alarm. The chateau itself feels very believable and meticulously modelled, with evidence of a garrison going about its daily life, along with patrols that can be avoided or picked off one by one, once you’ve observed their movements.

We found Moller’s office, but it was locked, and in the course of trying to pick its lock – a process which doesn’t involve a mini-game but does take an uncomfortable amount of time – we were spotted and after a brief shoot-out, headed upstairs to the attic to hide. This proved fortuitous, since we discovered an alternative entrance to Moller’s office, via a hole in the attic floor.

Once in, we conducted a thorough search but the intel that Fairburne anticipated wasn’t in evidence, so he concluded that this was still an antechamber and that Moller’s true office remained hidden. There were various objects with which we could interact, and one caused a hidden door in the wall to open. There, we found our first dossier about Operation Kraken, Moller’s pet secret project, which will presumably dominate the storyline henceforth.

Armed with the intel we sought, it was time to make our escape, since no Sniper Elite 5 mission is complete until Fairburne has exfiltrated. In order to do so, we had to make it to a designated spot at the edge of the chateau’s extensive gardens. In the process of doing so, a couple of moments of impatience set alarms blaring, and we died a couple of times, which at least showed that Sniper Elite 5 is relatively generous in its checkpointing.

We also had a chance to investigate the game’s role-playing style skill tree: you’re rewarded with experience points for all actions, such as takedowns and kills, and on levelling up receive a skill point. We spent ours on the section of the skill tree entitled Combat, although there were also Equipment and Body sections. Our solitary skill point added the ability to revive Fairburne with a medkit when he has been downed; other skills on offer in the section included the ability to throw back grenades, automatic tagging of enemies once they had been in your sights, and the ability to lay traps while on the move.

Our single mission playthrough took approximately one hour and 15 minutes – admittedly, we took it at a fairly leisurely pace, but there were large swathes of the map that remained unexplored and we also ignored the sub-objective, which was the assassination of a high-ranking Nazi officer who is stationed in a particularly exposed part of the map.

The constraints of the preview event meant that we had time for another playthrough, which brings home the high level of replayability in the game. Opting to take an alternate route to the chateau, we found some new intel, took on a whole different set of enemies, and located tunnels leading into the surrounding countryside from the chateau’s moat, offering a new means of exfiltration.

Anyone who has played a previous Sniper Elite game will know how quickly one becomes obsessed with finding everything there is to discover in each level, and that was even more the case for Sniper Elite 5, with its bigger maps and greater level of detail.

Those who haven’t played a Sniper Elite game before can expect absorbing, beautifully fettled, and thoroughly modern third person shooting and action. All of which is set within a painstakingly rigorous and believable environment, which brings the nefarious exploits of the Nazis in 1944 France to believable life. Sniper Elite 5 straddles the line between escapism and historical accuracy with aplomb, and clearly offers a great amount of replay value.

From a single mission preview, it’s impossible to assess how it will hang together as a game but with the ability to pay it co-operatively with a friend, which, if Sniper Elite 4 is anything to go by, should be pretty compelling, it should result in a game which will capture your attention for a significant amount of time. It may not possess the glamour of other triple-A titles but if you try it yourself you’ll find it a focused, surprisingly plausible, and above all very entertaining actioner.