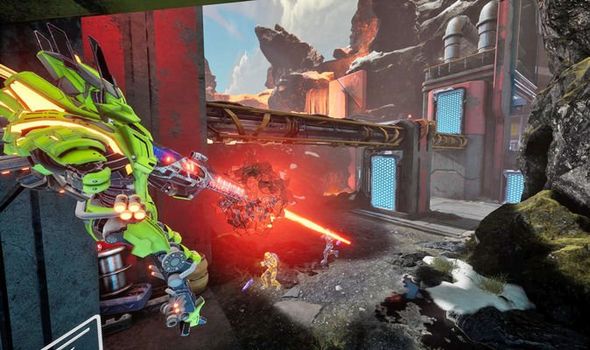 Announcing the news, the official Splitgate Twitter account said servers had been taken down ahead of the “true” experience debuting.

The @Splitgate Twitter posted: “At 12 Midnight PT the Splitgate servers will be offline until 12 Noon.

It then added: “It’s the calm before the storm…

“Servers are now offline. We’ll see you in 12 hours when we come back at 12 Noon PT! Use this time wisely to prepare for what’s to come…”

News on Splitgate is set to drop during Gamescom 2021 Opening Night Live, which kicks off today at 7pm BST.

And the Gamescom Twitter account has said the upcoming Geoff Keighley-fronted event will feature a “world premiere” on Splitgate.

With Splitgate currently in beta, it’s thought the upcoming Gamescom announcement could be about the full game releasing.

One Twitter user asked the Splitgate Twitter if this was the case, and their response could suggest this is on the cards.

A gamer asked: “Is Beta closing and Full game releasing or smt?”

Responding the Splitgate Twitter simply replied with a GIF of a man slowly turning around and smiling.

In another reply the @Splitgate Twitter also suggested an exciting launch was on the horizon.

The account tweeted: “This is a planned server shutdown to prepare for… well, you’ll see”.