One of the most valuable fish in Stardew Valley is the Sturgeon, but not for its direct sell price. Instead, it can be placed into a Fish Pond to produce Sturgeon Roe, which can then be used to make the ever-valuable Caviar.

If you don’t want to become a Caviar tycoon, you can just sell the Sturgeon directly, too, as they are one of the more valuable fish in the game. Sturgeon also have some other uses in the game, too, all of which will be outlined here.

Where to Catch a Sturgeon 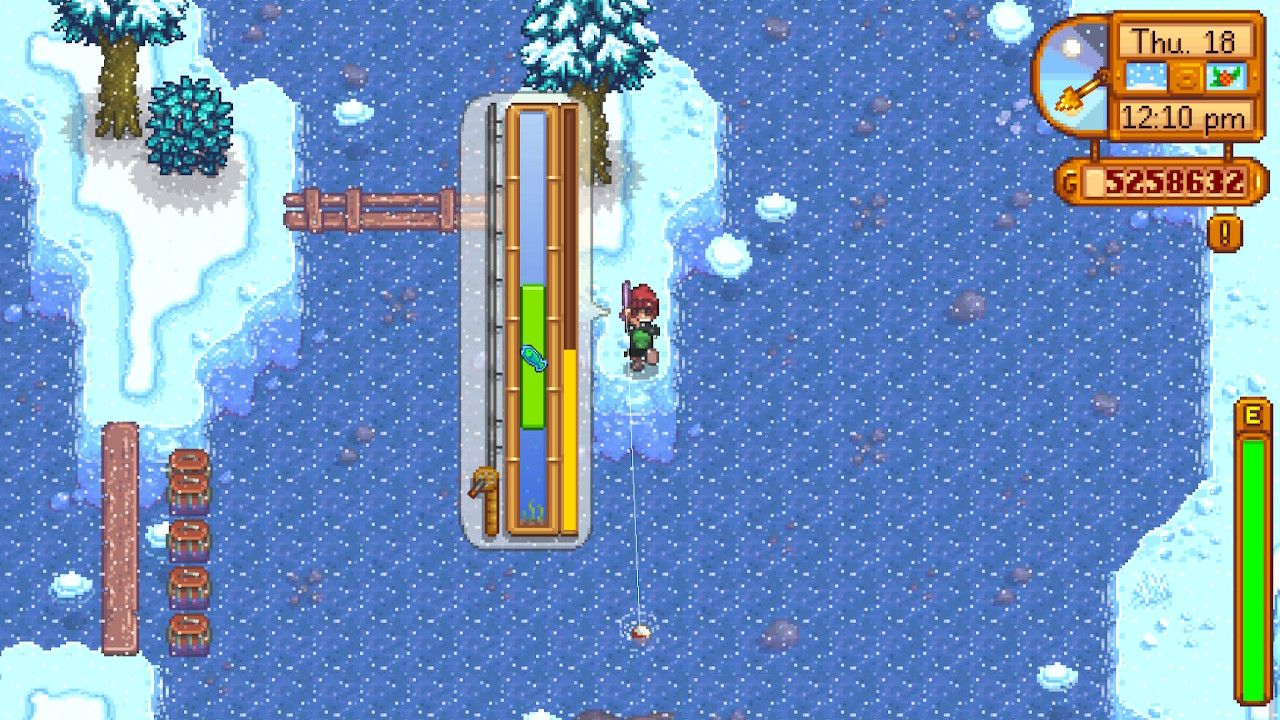 Before you even start using Sturgeon to produce Caviar or any of their other uses, you’ll need to catch one first.

Head to the mountain lake, just northeast of town. This is the only place where Sturgeon can be caught. In Summer and Winter, you can catch Sturgeon here between 6 a.m. and 7 p.m.

The weather doesn’t matter, as Sturgeon can be caught in any weather. However, it’s more common during rainy days in the Summer. Casting further from shore (possible with a higher Fishing skill level) also increases your chances of finding one.

Magic Bait is a new item added in the 1.5 update. It allows you to catch fish from any season, time, or weather in the location you use it. This would allow you to catch Sturgeon any time of year during any weather, but it greatly increases the pool of possible fish, making your chances a bit lower. They aren’t super rare on rainy Summer days, so that’s probably your best bet.

Sturgeon are a bit tough to catch, though not the hardest. Leveling up your Fishing skill makes fishing much easier, by increasing the size of the mini-game fishing bar. Note: a Training Rod cannot catch a Sturgeon. Some tackle can make catching a Sturgeon easier, too. Trap Bobbers and Cork Bobbers both make the mini-game much easier.

On Wednesdays, Krobus will stock a random fish from a set list of 10 (or a Magnet). One of these possible fish is Sturgeon, so if you aren’t a great angler, check Krobus’ stock every Wednesday.

How to Build a Fish Pond 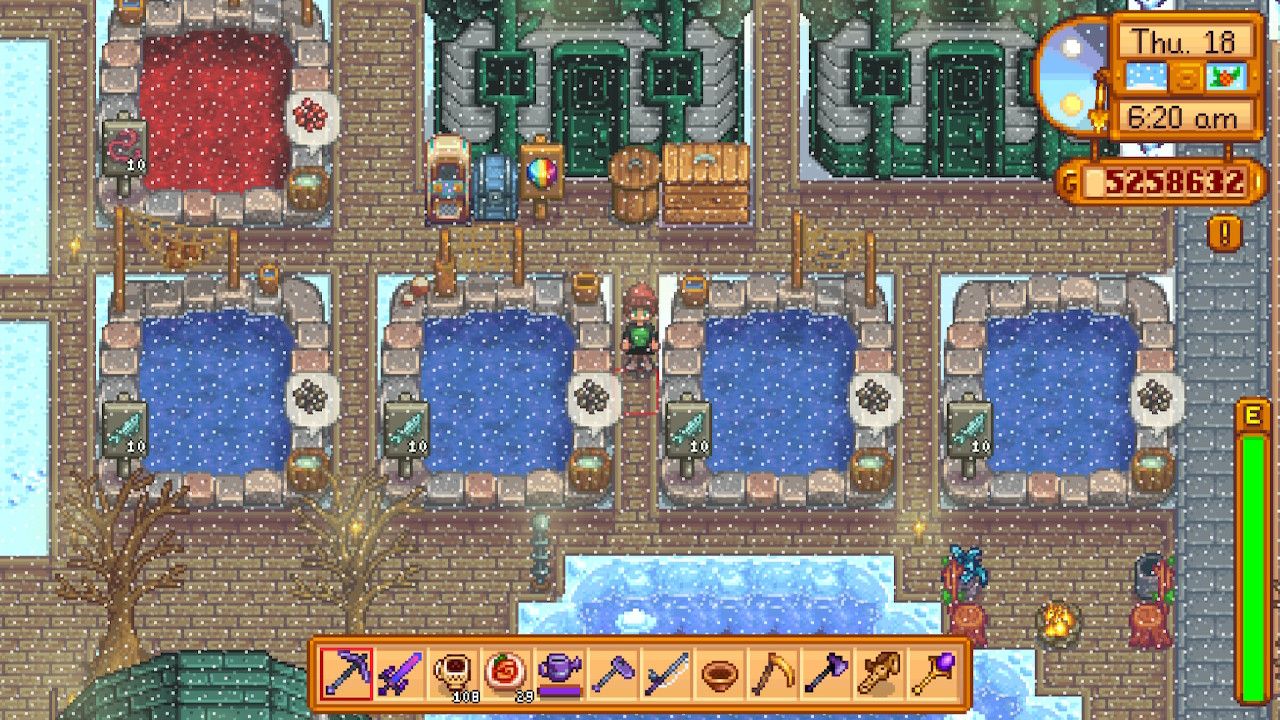 If you’re looking to start producing Caviar, you’ll need a Fish Pond to place your Sturgeon in. Luckily, they’re pretty easy to build. Robin, the local carpenter, is happy to build you one if you bring her some cash and the right materials.

Fish Ponds are 5×5 tiles and take Robin two days to build. Once built, you can place a fish inside, where it’ll swim around happily.

Over time, the fish will multiply, up to a total of 10 per pond. Once there are certain numbers of fish, they’ll ask you for something in order to multiply further. The number is different for each species, but we’ll look at Sturgeon specifically.

While most species of fish have a list of things they can produce in a Fish Pond, Sturgeon will only produce Roe. They’ll produce either one or two each day, with some chance to just produce nothing on some days.

If you have different fish in different ponds, you can place a sign on them which will display the species. Additionally, you can change the ornamental details of the pond by clicking “change appearance” in the Fish Pond’s menu. 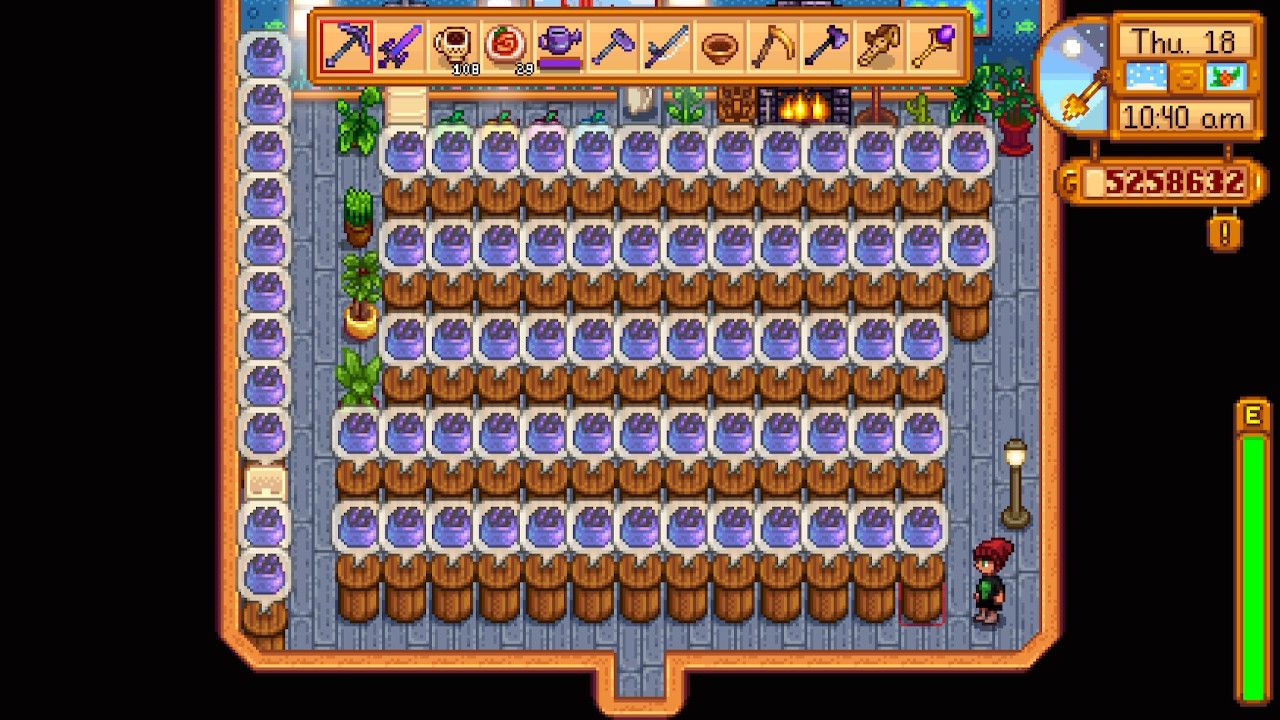 Every type of Roe, except for Sturgeon Roe, can be placed in a Preserves Jar to produce Aged Roe. Sturgeon Roe, though, will turn into Caviar.

A Preserves Jar will take 6,000 in-game minutes to turn Sturgeon Roe into Caviar, which equates to about four in-game days (time passes differently at night).

At its base price, Caviar sells for 500g. However, if you have the Artisan profession, it’ll sell for 700g. If you decide to eat it, it’ll restore 175 energy and 78 health. It’s also an almost universally-liked item, being liked by every villager (granting you 45 friendship points on a normal day) except for Jas, Sebastian, and Vincent.

If you complete the Community Center, you’ll soon after unlock the Missing Bundle, which, when completed, will result in the opening of the Movie Theatre. You have a choice of what to use for this Bundle, but Caviar is one of the options.

Finally, if you’re feeling fancy, you can place Caviar in the spool of Emily’s sewing machine (or your own if you’ve unlocked it with the right Special Order) with some Cloth to create the Fashion Hat.

Other Uses for Sturgeon 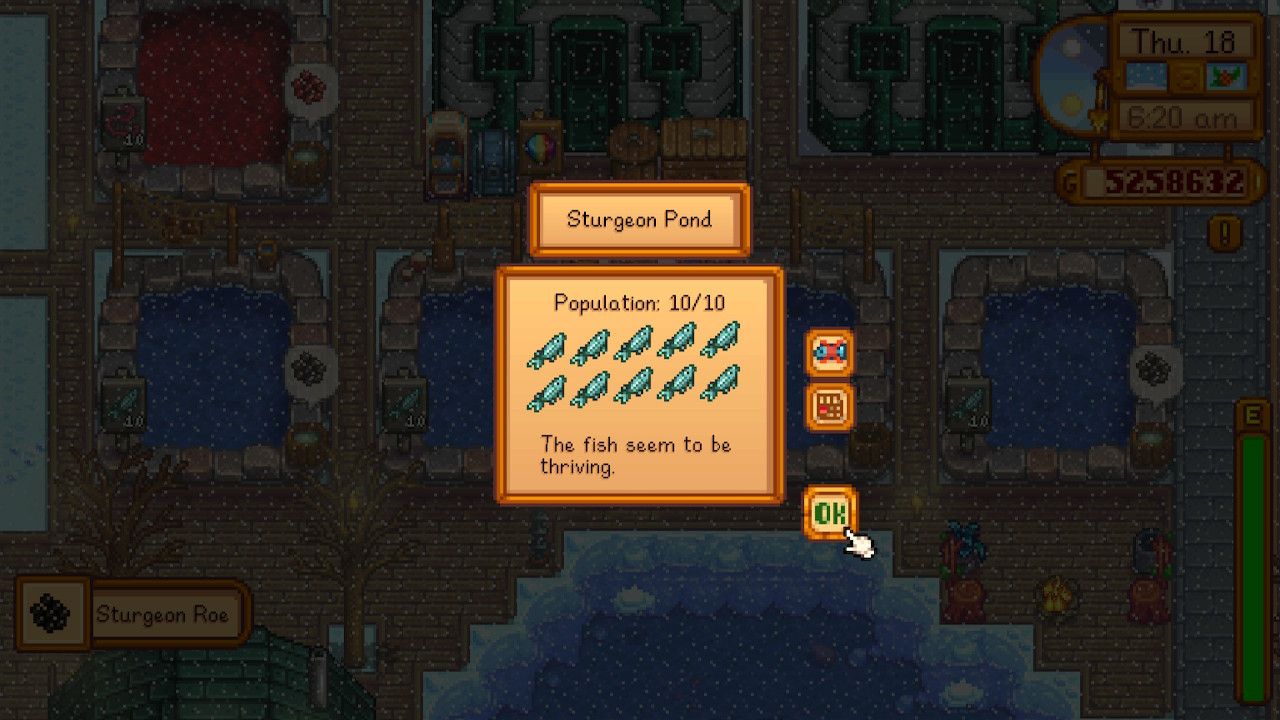 While creating Caviar is easily the most profitable way to use Sturgeon, it isn’t their only purpose. If you decide to just sell them, they sell for a base price of 200g (at normal quality without Fishing professions). An iridium-quality Sturgeon sold by someone with both the Fisher and Angler profession bonuses will sell for a nice 600g.

However, since the base price of Caviar is 500g, it’s much more profitable to place Sturgeon in a Fish Pond instead of selling them directly, even after factoring in the price of the pond itself.

While the fancy Fashion Hat can be created from Caviar, those looking for a more blue-collar look can bring a Sturgeon and some Cloth to a sewing machine to create the Fishing Vest. There are also some recipes that require any fish, which can be a Sturgeon, if you want. They include Maki Rolls, Sashimi, and Quality Fertilizer. But, since you can use any fish for these, you should probably use something cheaper or more common.

You’ll need a Sturgeon to complete the Lake Fish Bundle in the Community Center, in the Fish Tank Bundle set.

Finally, if you have some extra Sturgeon and don’t want to sell them, give them to Willy! They are one of Willy’s loved gifts, netting you a nice 80 friendship points with him on a normal day. 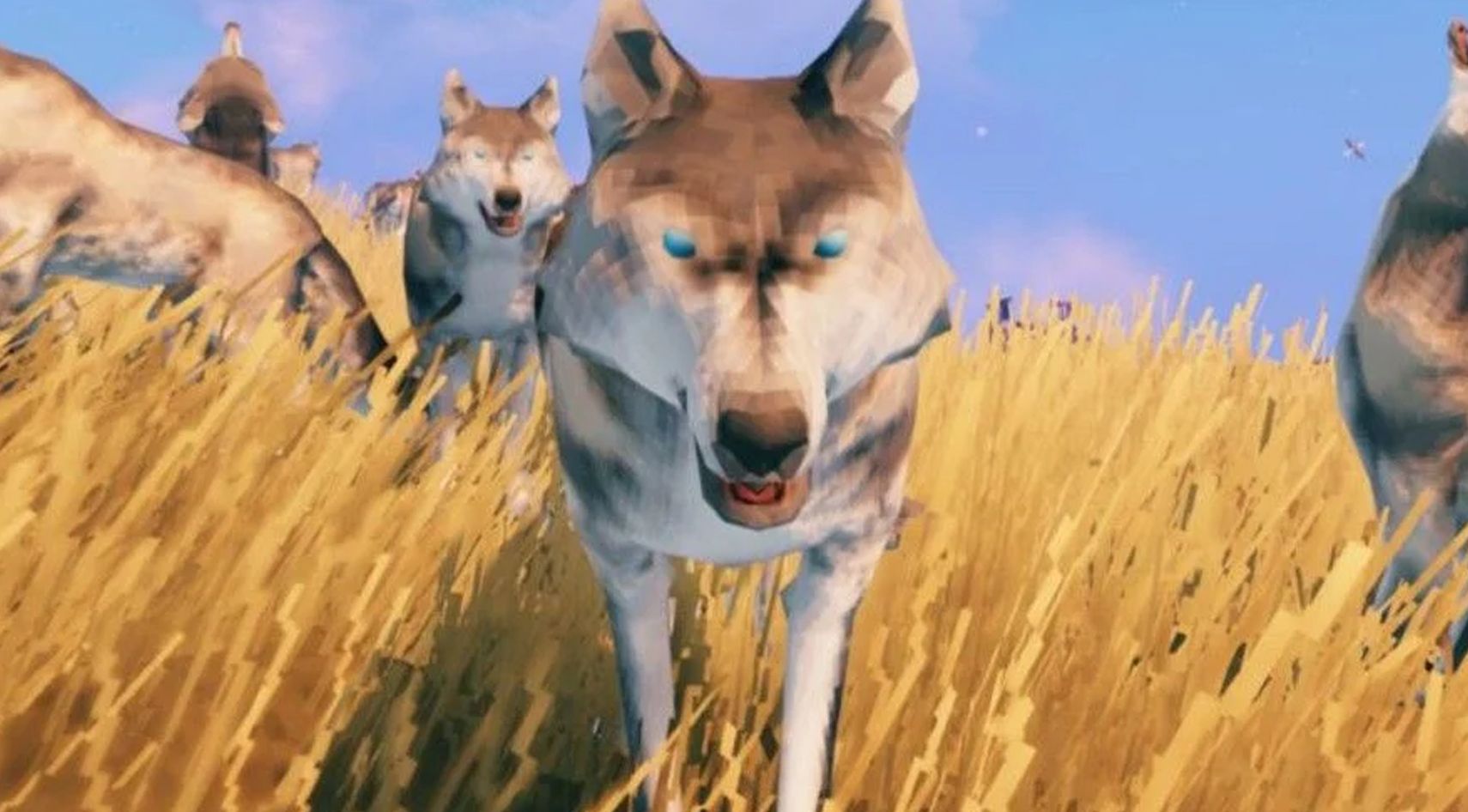 Michael is a journalist with several years of experience writing about video games, television, and social issues. He loves indie platformers, Pokémon, and Hack ‘n Slashers.