Stranded: Alien Dawn doesn’t hold back in the execution of its premise. As the title suggests, you find yourself stranded and must do whatever is necessary to stay alive. This includes finding food, water, shelter, and medical supplies. It’s a survival sim in every sense of the word, and the stakes are high. Now the Dunes and Moons update manages to raise them again with some new mechanics to contend with.

I played Dunes and Moons during the Frontier Foundry preview event having never played the game before. While Stranded: Alien Dawn is very much my type of thing, it’s also the end of the year. This means panic playing all the things I want to play before I write my Game of the Year list, and as a result, Stranded: Alien Dawn flew under my radar. Therefore, I was relieved to find that getting the basics down is nice and easy, especially since there’s a decent tutorial mission and a range of difficulty settings. 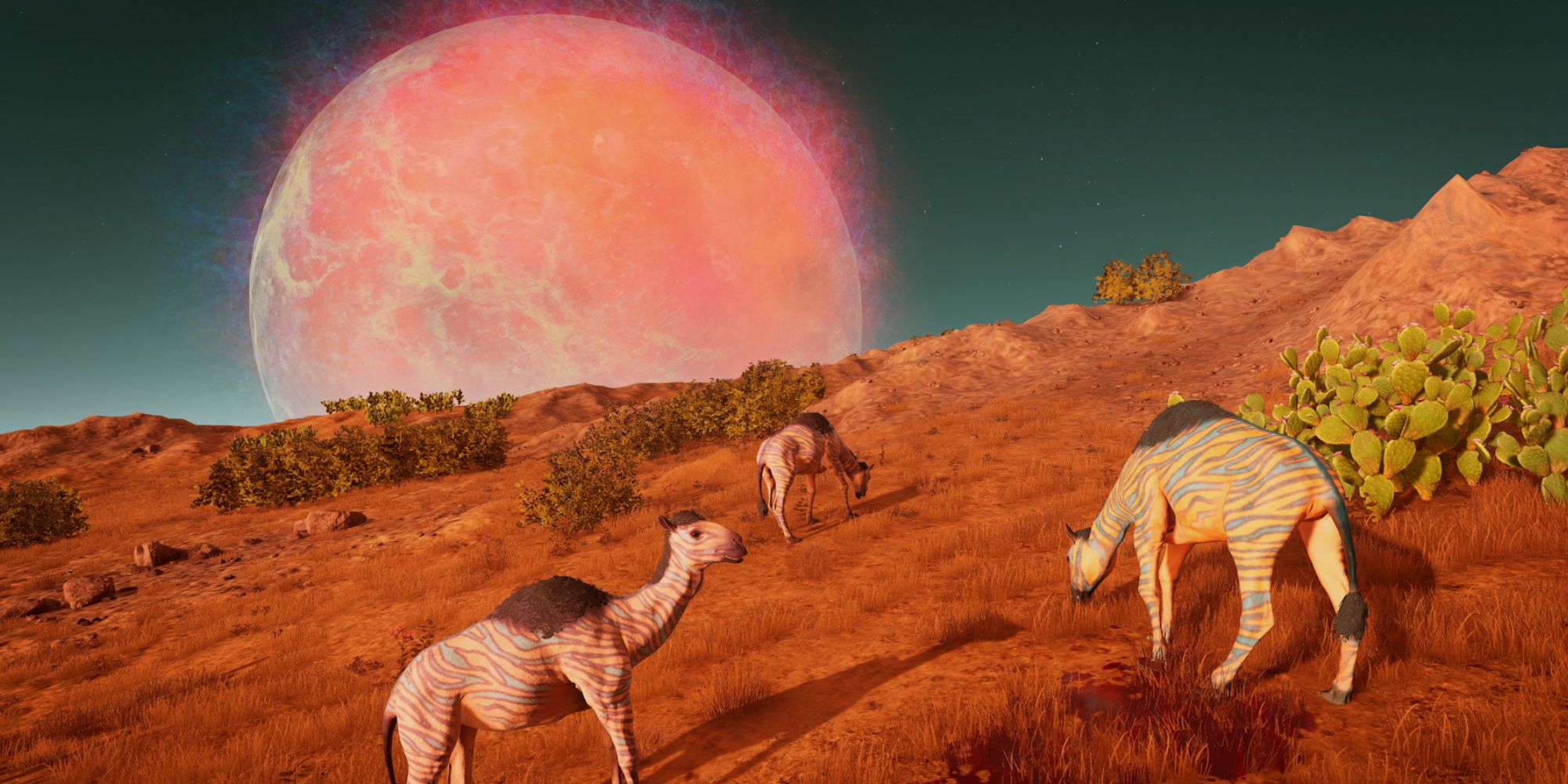 After a brief journey through the tutorial, I was sent to the new hostile planet that plays host to the Dunes and Moons update. When first venturing into this brand-new land I was struck by how beautiful it was. As desolate and hostile landscapes go this one is stunning. The terracotta-coloured rocks contrast beautifully against small puddles of water, verdant palm trees, and vibrant alien plant life. If I’m going to die on some random planet I’d prefer it to be a pretty one, so I was already sold before I’d built my first shelter.

My landing party came with skills and backstories, which is a nice aspect of the game that naturally I completely ignored – I had limited time and there were weird plants to poke with a stick. I sent someone out to research the local fauna to see if it was edible, or even hostile, while the others set about making a shelter.

The ship you crash-landed in is way beyond repair, but you can salvage materials from it. This involves hitting it with a pickaxe that makes what is likely the most satisfying sound in the game. While enjoying this clunk, I went to check on the plant research and realised two important things. Firstly, it takes a long time to decide if a plant will kill you when consumed. Secondly, this planet has a bug problem.

Alerted by some screams, I saw my trusted researcher being surrounded by some kind of weird bug I didn’t want to look at too closely. Luckily I had tactics that involved running away to camp, and one solitary gun which could be used to eliminate the problem. I could even use it from behind the safety of the fence I was very happy to have built, just because it was an option. I actually had no idea if and when the fence would be useful, but it looked good and I’m a sucker for a well-organised and aesthetically pleasing base, at least in my digital life. 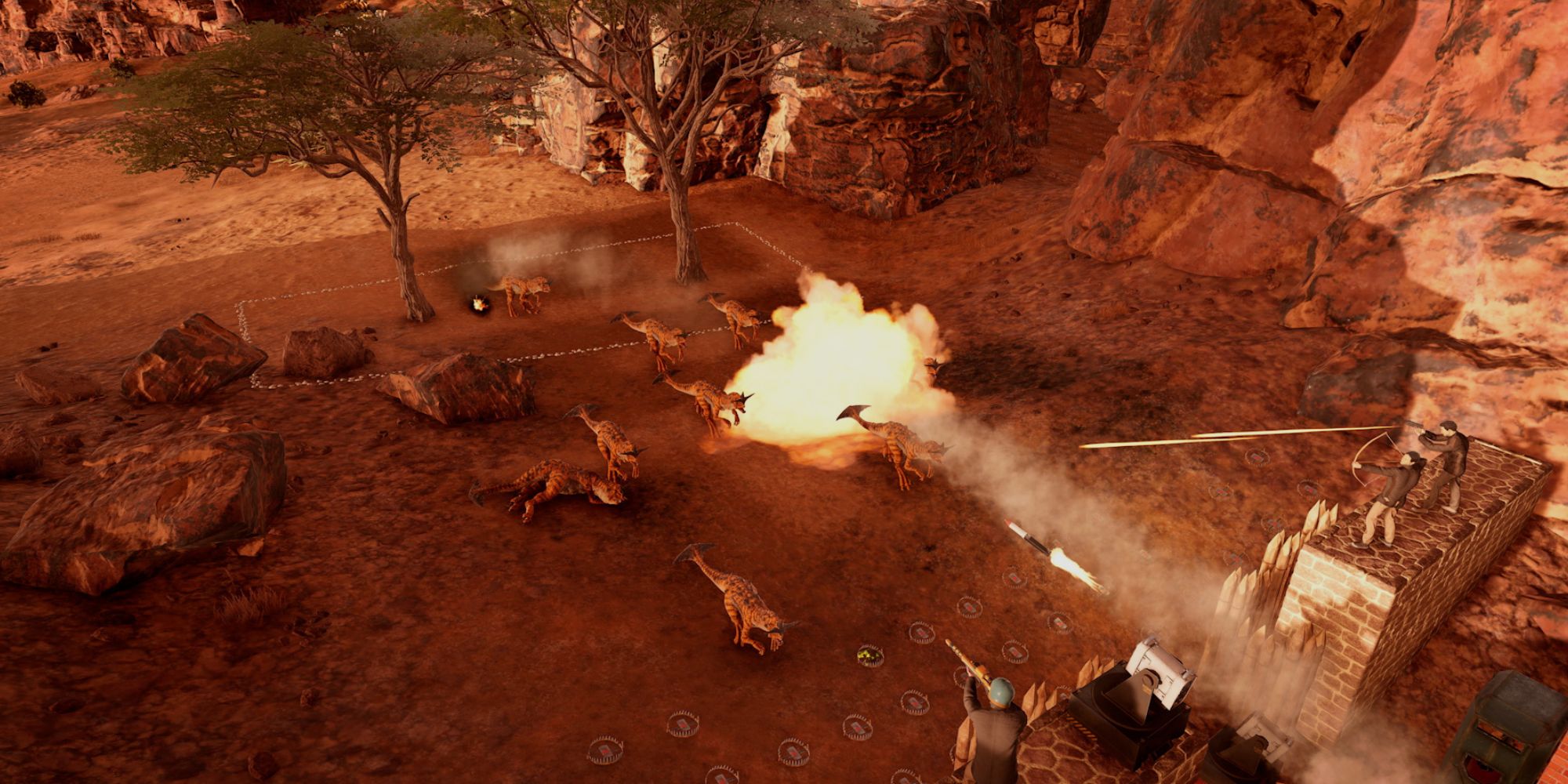 I only played the game briefly so wasn’t able to experience all it had to offer, but it was enough to get a feel for the new world. We played under the moon of Jason, which despite sharing a name with a serial killer, actually allows you time to recover between wildlife attacks or other disasters. It’s one of three moons on the planet and the one you’ll really want to stick around. This is because Nyx brings more hostile wildlife, and Chaos is said to truly live up to its name.

The moons’ influences on the planet’s s ecosystem and inhabitants transforms how you play. While I didn’t experience the moon shifting, I did see how differently you need to respond to environmental issues compared with hostile wildlife. It looks set to add a level of flexibility to the game that’s not often found in survival sims. It’s a nicely integrated mechanic that sees you forced to view the bigger picture. If you focus too much on one aspect of survival, such as food, you may find that a lack of defences means a bug attack wipes out all your supplies. You’ll also need to juggle food and water supplies, as well as heat. While the desert landscape looks warm and inviting, it actually drops below freezing at night and hypothermia is a thing here. If you don’t embrace a warm fire then your adventure will come to a swift end. Think Jack Nicolson in The Shining, but with less snow and more bugs that look like they belong in Starship Troopers.

If you’re already playing Stranded: Alien Dawn, then this new addition will bring extra challenges to your survival story. If you aren’t playing it, then maybe it’s time you do. I know I’ll be looking into it. Just as soon as I’ve finished the last couple of games on my “things I wanted to play months ago but never found time to start” list.