When Kate and Ludwig hear Leni's confession in 2005, the only thing left to learn is what happened to Dana after the war. Leni says to look inside her mobility assistance automaton to find the last letter she ever received from Dana. However, she doesn't tell Kate how to retrieve it.

The final puzzle in Syberia: The World Before requires Kate to figure out the automaton's systems and get the letter. The process takes several steps and may require a little of backtracking. If the last challenge has you stumped, this guide will get you through to the end credits, spoiler-free.

How To Retrieve Dana's Letter From The Automaton 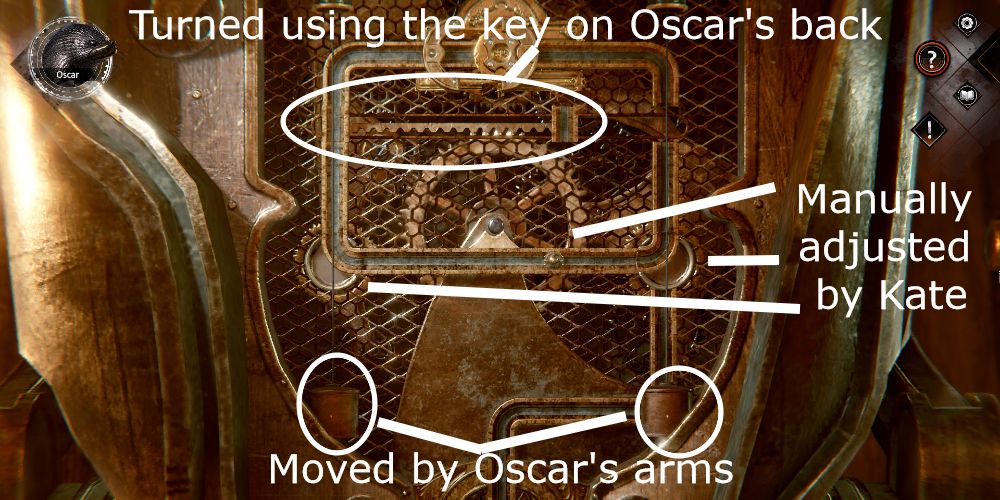 After Ludwig leaves the room following Leni's last story, check the automaton in the corner of the room. Start by opening the two clasps on its vest. Next, look at its bow tie, and rotate both halves 180 degrees so that the design is inverted.

You'll need a specialized key to proceed, so if you haven't already done so, go downstairs and inspect Leni's wheelchair. The hand rest to your right has a hidden compartment – lift the cushion to reveal a Voralberg Key whose shape can be altered by extending and retracting four shaped prongs. Set it so that the two prongs with diamond-shaped ends are extended to form a straight line, then go back to the automaton. Insert the key into the bow tie and turn it clockwise one full rotation, then pull the automaton’s chest plate open. 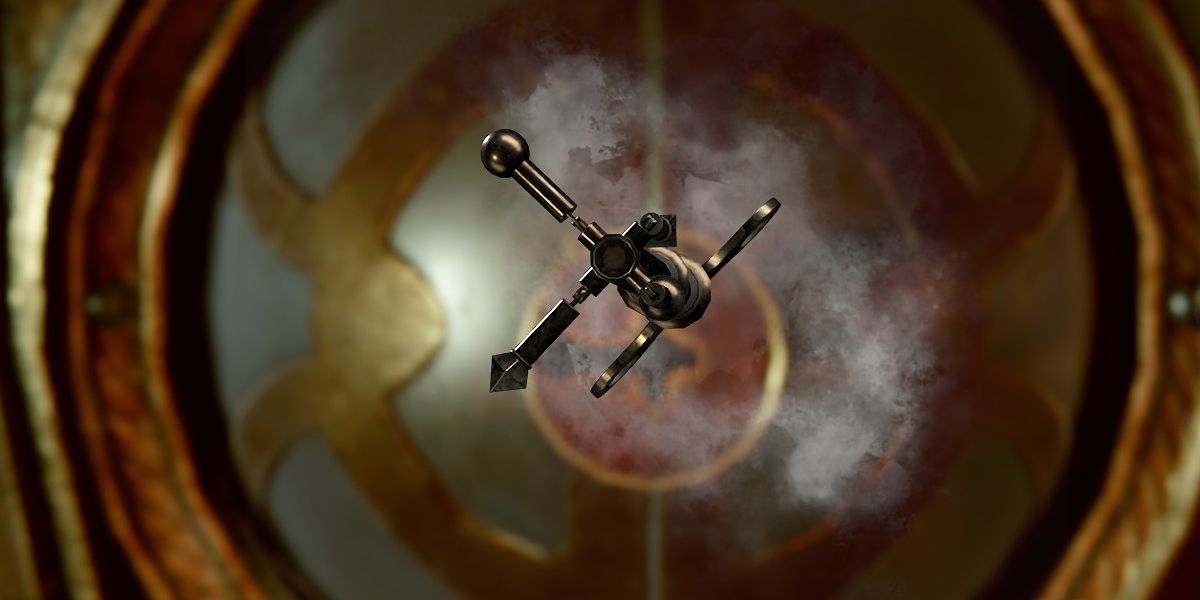 Look at the automaton’s heart in the upper corner. Reconfigure the Voralberg Key into an L-shape with a diamond on top (it helps to look at the key with the handle facing you, as this is the way the key will enter the lock), and use it to unlock the heart mechanism.

With the heart opened, push the ring at the top upward to stop the mechanism. While doing so, observe the wheel at the bottom. You need to time stopping the machine so that the key at the bottom is exposed by the wheel. The best way to time this is to push the ring just as the key becomes visible, as the clockwork takes about half a second to stop moving. Pull the key outward and push the central plate all the way down. Turn the crank in the lower right until all three rods are retracted, then remove the heart. Put Oscar in its place to allow him to control the automaton’s movements.

Switch to Oscar’s perspective and look down twice to expose a new mechanism for Kate to work with. Switch back to Kate and look at the back of the automaton. Insert the Voralberg Key, with a single diamond prong extended. Rotate it clockwise to position the parts on the other side. Next, slide the plate below downward and pull the switch inside to release the knob on the stomach. Move the knob as far as it will go and switch back to Oscar. 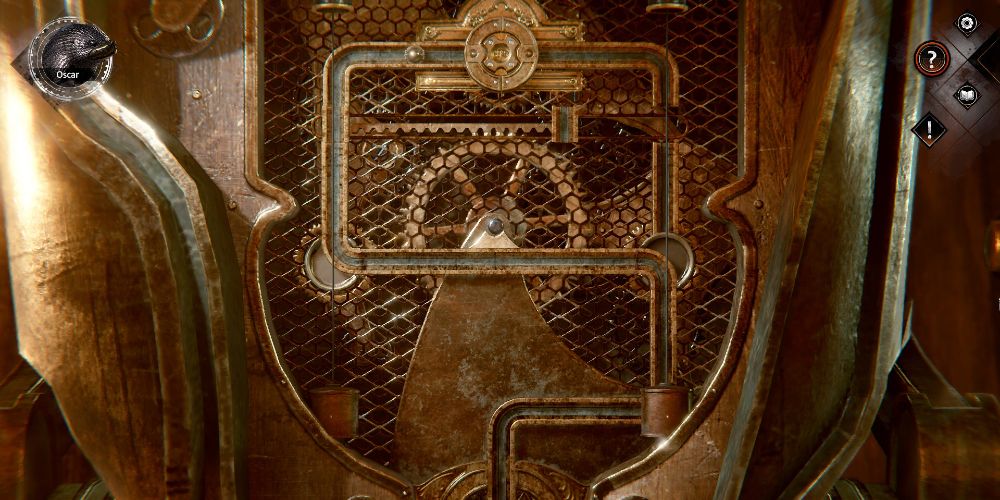 Move both of Oscar’s arms upward then return to Kate. Rotate the exposed plates to continue the track, creating a track for the knob to reach the lock at the top. Retract the left half of the lock, then move the knob back to the middle of the machine, between the two connector plates. Turn the right plate so that the knob can continue up the right-hand track, then use the Voralberg Key on the automaton’s rear again. Turn it counterclockwise to create a path for the knob to reach the right half of the lock. 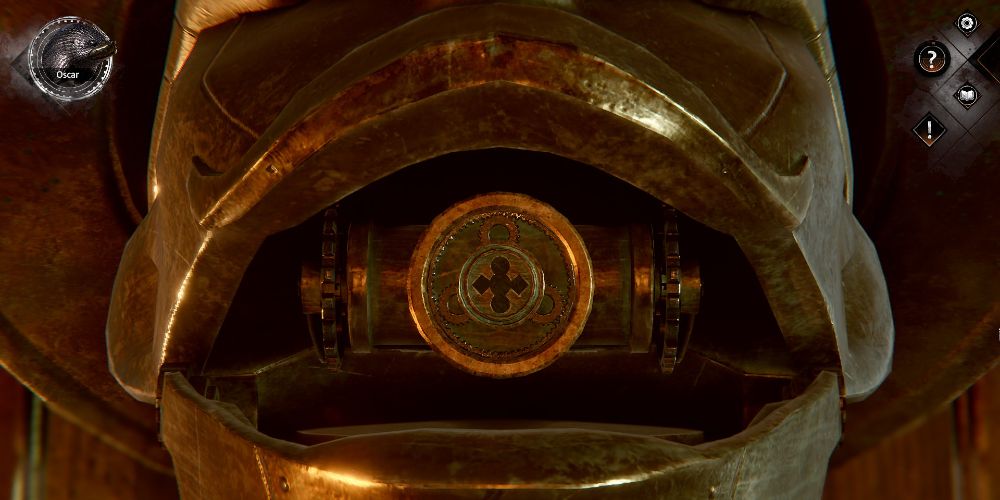 When both halves of the lock are opened, turn the central dial clockwise to open the automaton’s mouth. Adjust the Voralberg Key so that all four prongs are retracted, and insert it into the exposed lock. After turning the key clockwise, Dana’s final letter to Leni will protrude from the automaton’s top hat. Read it to return to Dana’s perspective one last time. 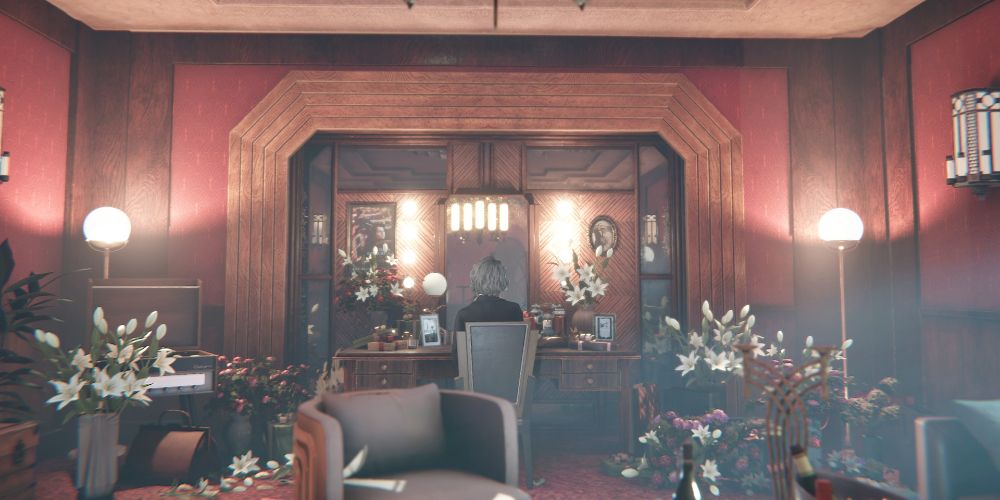 Look at the photos around the desk, then observe Dana’s reflection in the mirror. Look to the left to check the record player, then open the bottom-left drawer to find a letter. To Dana’s right is a pile of gifts, and the top-right drawer contains a cassette tape. Once you’ve looked at everything, the phone will ring – answer it to flash forward a few weeks.

After the cutscene, look around the house to finish your secondary objective before leaving through the front door. 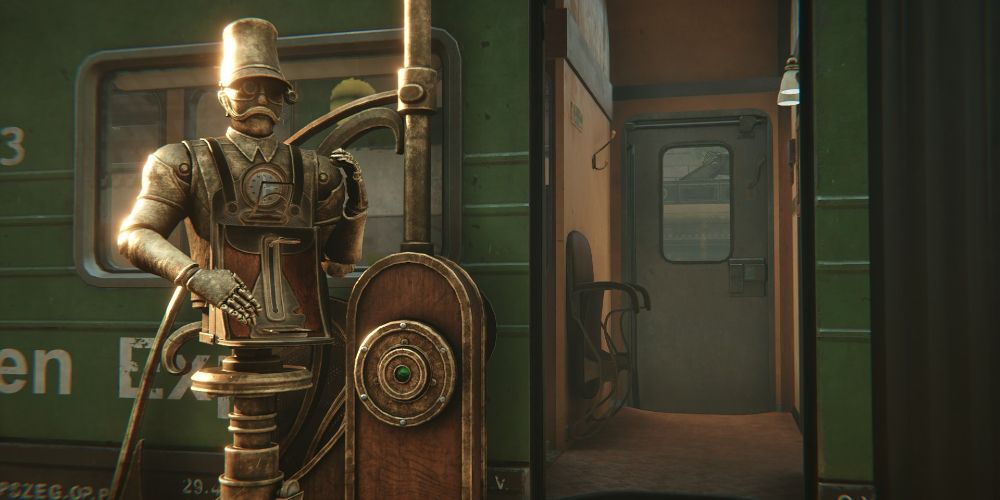 Once Dana leaves the house, another cutscene will play and the game will pick up with Kate at Vaghen Central Train Station. Check your inventory for a train ticket to the airport. Use the ticket validator along the center of the platform to check-in; set the date to 30-11, as the ticket is for 30 November, and press the button at the bottom. When the mechanism opens, place the ticket on the desk.

Use the side handle to move the stamp back, and press down on the ink pad. Move the handle back to its original position and stamp the ticket. On the left side, press the button at the front of the mechanism, then the button on the top to punch the ticket.

Behind the stairs from which you first entered is a phone booth. Use it to call Olivia before boarding the train. Use your wallet to put a coin in the slot, then interact with the dial; you don’t need to enter the phone number manually.

After the phone conversation, bring the validated ticket to the automaton at car number 3. Insert the ticket, then pull the handle on the automaton’s stomach. After the ticket is confirmed, press the green button on the left to board the train. When you’re ready, leave Vaghen. On the train, look at the two tickets in front of you, talk to Oscar, then look up and open the window shade.

Finally, take a look at the train across the platform to view the game’s final cutscene.