Team Ninja president Fumihiko Yasuda has seemingly confirmed that the studio has plans in the future to reboot two of its most iconic series – Ninja Gaiden and Dead or Alive.

Even though Team Ninja is only just approaching the finish line on development for Wo Long and still has a ton of work to do on Rise of the Ronin for its 2024 release, that hasn't stopped speculation on what it might be doing in the future. Fans of the studio have long been asking for new entries in its two most iconic series, Dead or Alive and Ninja Gaiden, with Team Ninja dropping hints here and there that it might eventually be happening.

It seems that Team Ninja is done with teasing and has now straight-up confirmed that it has plans for both games. As reported by VGC, Team Ninja president Fumihiko Yasuda recently appeared at a panel at the G-Star conference in Busan. While there, Yasuda presented a slideshow that provided behind-the-scenes details about the studio. 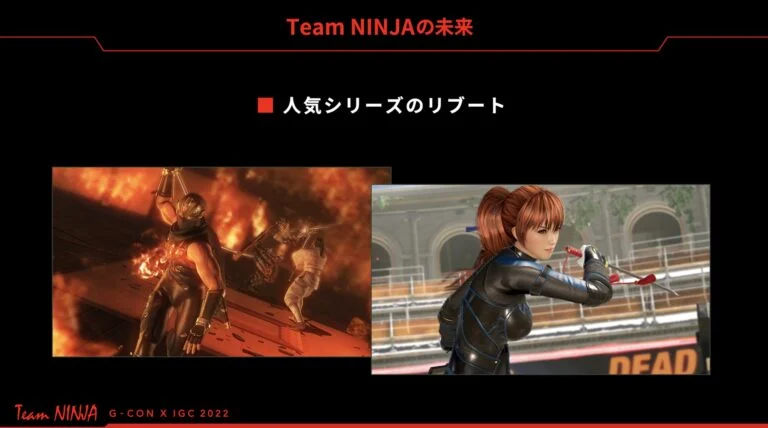 During the presentation, Yasuda showed a slide that read "Team Ninja's Future – Reboot of Popular Series" in Japanese, while showing an image of Ninja Gaiden and Dead or Alive. Nothing else was announced about the reboots, but it does seem that Team Ninja is working on some kind of revival for both series.

According to Korean site Ruliweb, Yasuda also said he wants to try and get more information out there for fans as soon as possible. Considering Team Ninja is only just wrapping up development of Wo Long and then has another big project in the form of Rise of the Ronin, it seems unlikely that we'll be seeing anything for either series any time soon.

One possible way for Ninja Gaiden and Dead or Alive to make a comeback before 2024 is if another studio creates a game using the IP. According to gaming insider Shpeshal_Nick, one rumour that he's heard is that Platinum Games has been attached to the Ninja Gaiden reboot and will be developing it.