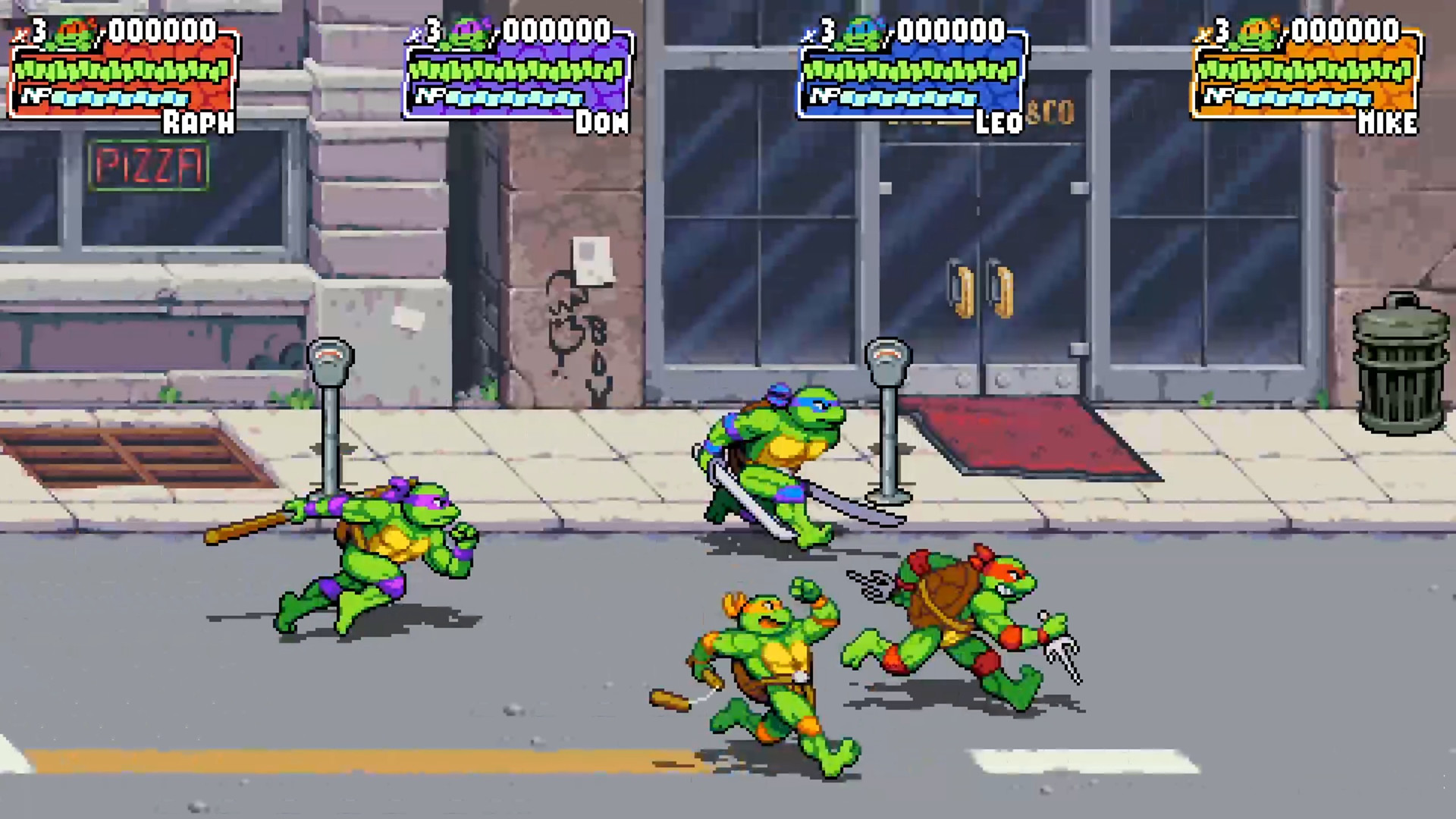 The heroes in a half shell return with a modern sequel to the classic 80s arcade game, but now with a six-player online co-op mode.

Next to Star Wars, Teenage Mutant Ninja Turtles is one of the most heavily licensed properties in video games. Indeed, the franchise’s early success owed much to games, with prominent 8- and 16-bit titles coming out just as the original TV show started to get big. The NES game in particular is still fondly remembered by many, but the pinnacle of Turtle gaming in the late 80s was the Konami coin-op… which now has a new sequel.

There’s no formal connection between the two games, because this has nothing to do with Konami and is instead being published by Dotemu, who were behind the excellent Streets Of Rage 4. That’s important not just because of how good that game was but because it’s also a scrolling beat ‘em-up. Shredder’s Revenge’s tone is obviously a lot more cartoonish but it has a similar eye for period detail and a desire to update the simplistic gameplay for a modern audience.

This is still just an old school beat ‘em-up though, where you can get through most of the game by simply mashing a single button, but there is nuance if you look for it… and even if you don’t the opportunity to play with six people at once goes a long way towards making up for it.

Although the preference for 16-bit consoles was to turn every movie and TV show into a 2D platformer, the genre of choice for arcade games was the scrolling beat ‘em-up. Everything from Alien Vs. Predator to The Simpsons got the treatment and while they all had basically the same gameplay these were amongst the most graphically advanced games of the era and were admired for both their visuals and co-op camaraderie.

These are also the two main focuses for Shedder’s Revenge, whose graphics really do look like a long-lost sequel. It can also accommodate up to six players locally and online (the original Turtles game only had four but Konami’s X-Men coin-op also went up to six). For Turtles fans, especially those that were around in the 80s and early 90s, that’s all you’re going to want to hear, and we can confirm that this is basically your dream game – the real question is how much appeal it has for anyone else.

There are seven playable characters: the four turtles, April O’Neil, Splinter, and Casey Jones (once you beat the story mode and unlock him). Each has minor variations in terms of their weapons, as well as stats for range, speed, and power, but they’re fundamentally all the same. Characters can be levelled up, with things like extra health and lives, by earning points but that’s an odd choice as all it ends up doing is disincentivising you from playing as anyone else – a process which the menu makes weirdly difficult anyway.

The main attack button is all you need at a pinch but there are a number of jumping and sliding moves as well, plus launcher style risking attacks, a heavy attack where you hold the button down, and a (relatively) unique special move that’s dependent on a charge meter.

There’s no block but there is a dodge move, that wasn’t in the original, which opens up the gameplay so that it’s always possible to avoid attacks – even when you’re getting mobbed by a group of enemies. The gameplay is still not complex but even on your own it’s fun to manage crowd control and take down half a dozen foes without raising a sweat.

As with Streets Of Rage 4, there’s just enough variety in moves for the game to seem like a modern title while retaining the retro simplicity of the original, and in that respect the game is perfectly judged. Although it’s a shame that while they have lots of different weapons, it’s still the case that at least 50% of your opponents are merely differently coloured Foot soldiers.

What is more disappointing is that there’s no attempt to modernise the structure or make the boss battles more involved. Almost every level works in exactly the same way, as you scroll left to right, roughing up the minor grunts before facing off against a boss that has unique attacks and weapons but doesn’t need any special tactics to defeat. The only exception to this is one which uses a rare second person viewpoint, although that clearly owes a huge debt to a boss from Battletoads.

There are a few vehicle levels where you’re on the back of a flying skateboard, but the most interesting thing about those is their retro soundtracks, particularly a hair metal number early on that is wonderfully awful.

Everything about the presentation is great though and it’s clear that’s where the majority of work has gone, with gorgeous pixel artwork that still feels like it’s something that could’ve existed back in the 90s. Not only is it technically impressive but there are tons of amusing touches like Foot soldiers eating ice lollies or playing with a bat and ball until you get near them.

Peculiarly, despite there being a separate story mode (the arcade mode is purposefully more difficult and wipes all your progress if you die) there’s barely anything approaching a plot. There’s hardly even any dialogue, which is especially peculiar as Dotemu went to the trouble of getting many of the original voiceover actors from the 80s cartoon. We know it’s only an arcade game, but it’s stuffed with cameos from throughout Turtles history and yet there’s no attempt to explain who anyone is or what they’re doing.

The Triceratons turn up in one level, for example, but there’s no explanation for what they are and if you didn’t know already you’d just assume they were reanimated dinosaurs and not space aliens. All of the bosses are named villains, but they get no characterisation and there’s no indication that the likes of Baxter Stockman is important or that they’re the ones making all the robots. Weirdly, even Shredder’s barely in the game and we’re still not sure what revenge specifically it is that he’s seeking.

There’s a lot of missed opportunities in Shredder’s Revenge and it’s not a game we can easily recommend if you’re going to be playing on your own. It’s very short, very easy in story mode, and, as the nature of the genre dictates, very repetitive. There are challenges and secrets to uncover for each level but none of them are especially interesting, so there’s little real incentive to keep replaying.

However, there is a final, and very significant, point in the game’s favour, and that’s that if you are playing it with multiple people, especially a bunch of you sat round the same screen, it’s significantly more fun. There are combo moves to perform together, you can revive each other, and even just share a bit of health if someone needs it. It’s a wonderful social experience and clearly that was the priority all along.

It could’ve been even more though. Dotemu is doing good work with these revived beat ‘em-ups but it’s yet to really push them into becoming something genuinely modern and innovative. Perhaps it needs to create a new IP for that, instead of relying on existing franchises, but while this is a beautifully made homage to the golden age of scrolling beat ‘em-ups – and Turtlemania – it is, unfortunately, nothing more than that.

In Short: A lovingly crafted retro homage, made with skill and obvious affection for the source material – but there’s very little attempt at innovation and little to interest non-fans playing on their own.

Pros: The game looks amazing, with great 2D animation and an obvious love for the franchise. Combat is perfectly judged, in terms of complexity, and the co-op options make the game.