When you die in Rogue Legacy 2, the heir you choose to carry on your previous character's legacy is randomly assigned a certain number of traits. These traits can be helpful or harmful, and they can either have visual effects like darkening or blurring parts of the screen, or gameplay effects like making your character jump higher or deal more damage.

It may seem like a good idea to only choose heirs with helpful traits, but since harmful traits can provide bonus gold or higher stats, suffering through their effects can give you an advantage. Before you pick your heir, be sure you know the consequences of their traits, or you may end up playing the game with an upside-down perspective! 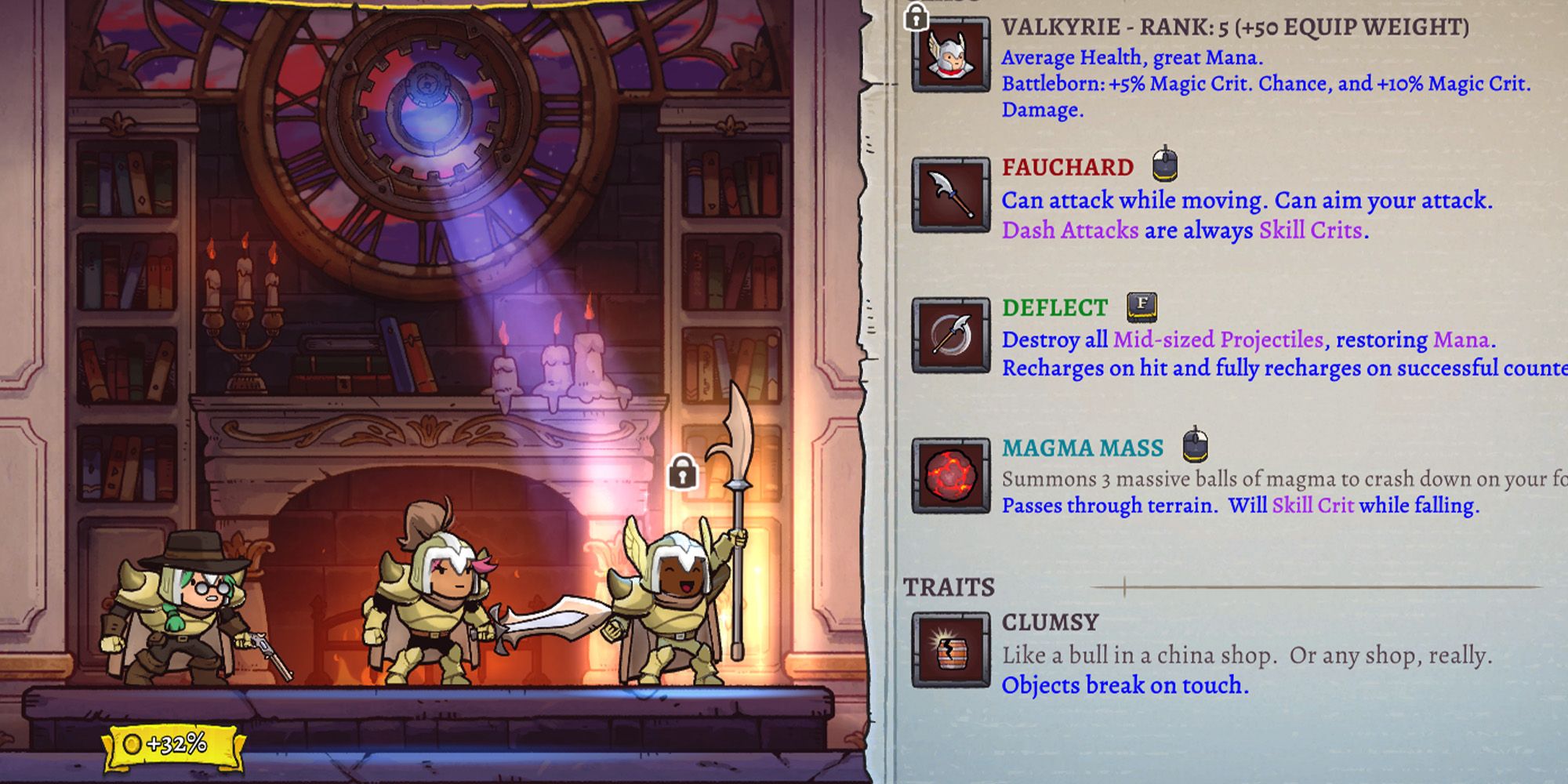 Throughout your time exploring the castle, you will spend a lot of time breaking objects to gain gold, Mana Potions, and Health Drops. The Clumsy trait saves you that time by immediately breaking any objects you walk into.

There are some minor disadvantages to this trait. In the Phison Dry Lakes section of the castle, mushroom platforms will break if you jump onto them from underneath, making some rooms tougher to navigate. This trait also makes some chests inaccessible. Besides these niche situations, Clumsy can save you a lot of time collecting minor resources. 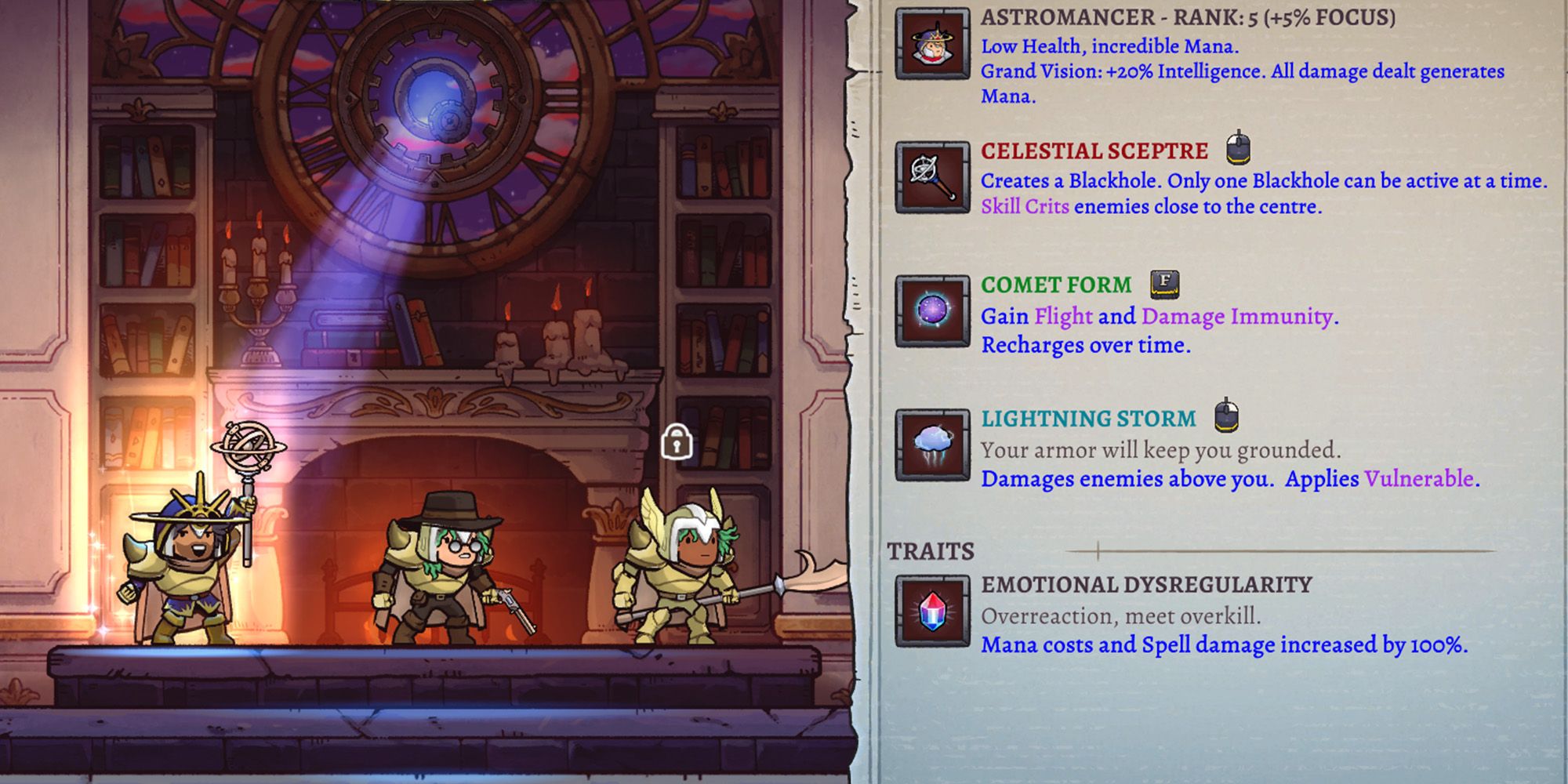 Emotional Dysregularity won't be good on every run, but if you know when to choose this trait, it can pay off in spades. Emotional Dysregularity makes your spells cost double their normal amount of mana, but also deal double damage. The reason you wouldn't want this on every run is that it may mean your spells cost more mana than you have available, making you unable to cast them in the first place.

If you get this trait with a Mage or an Astromancer, you'll be able to cast spells that melt enemies. The strength of this trait may even make these two classes rank among the most powerful video game mages.

8 Spelunker: See All Chests On The Map 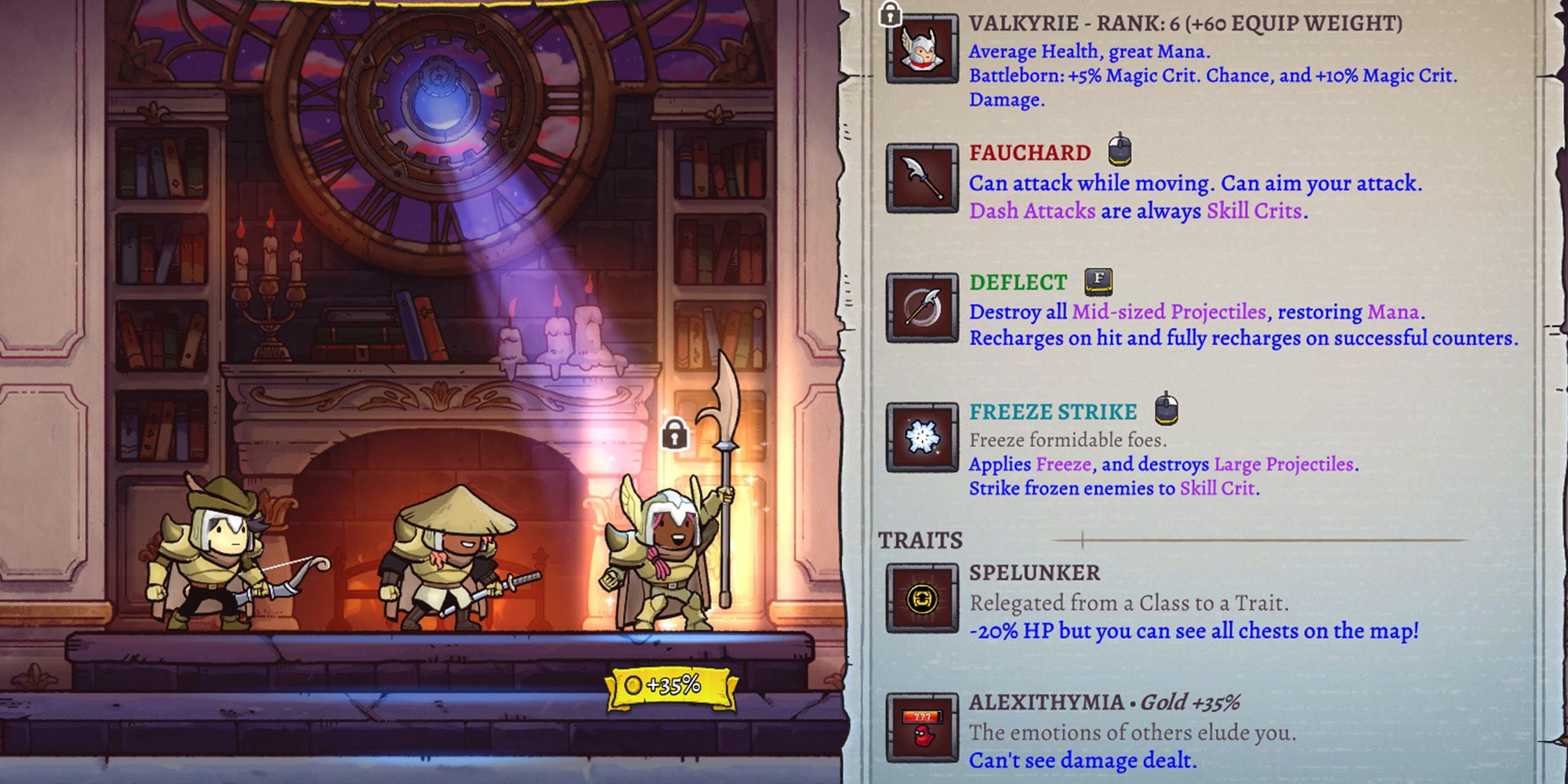 The Spelunker, its own class in the original Rogue Legacy, has been demoted to a trait in the sequel. This is good news though because it means you can get even more out of your heir. The Spelunker trait reveals the position of all chests on the map in exchange for 20 percent less health, but it doesn't show you the shapes or paths of the rooms themselves.

Spelunker is especially good when paired with a class whose skill can make you invulnerable, like the Assassin's Obscura or the Astromancer's Comet Form, since they'll let you gather gold much more safely. Don't hesitate to snatch this Spelunky-inspired trait if you need to grind for an upgrade! 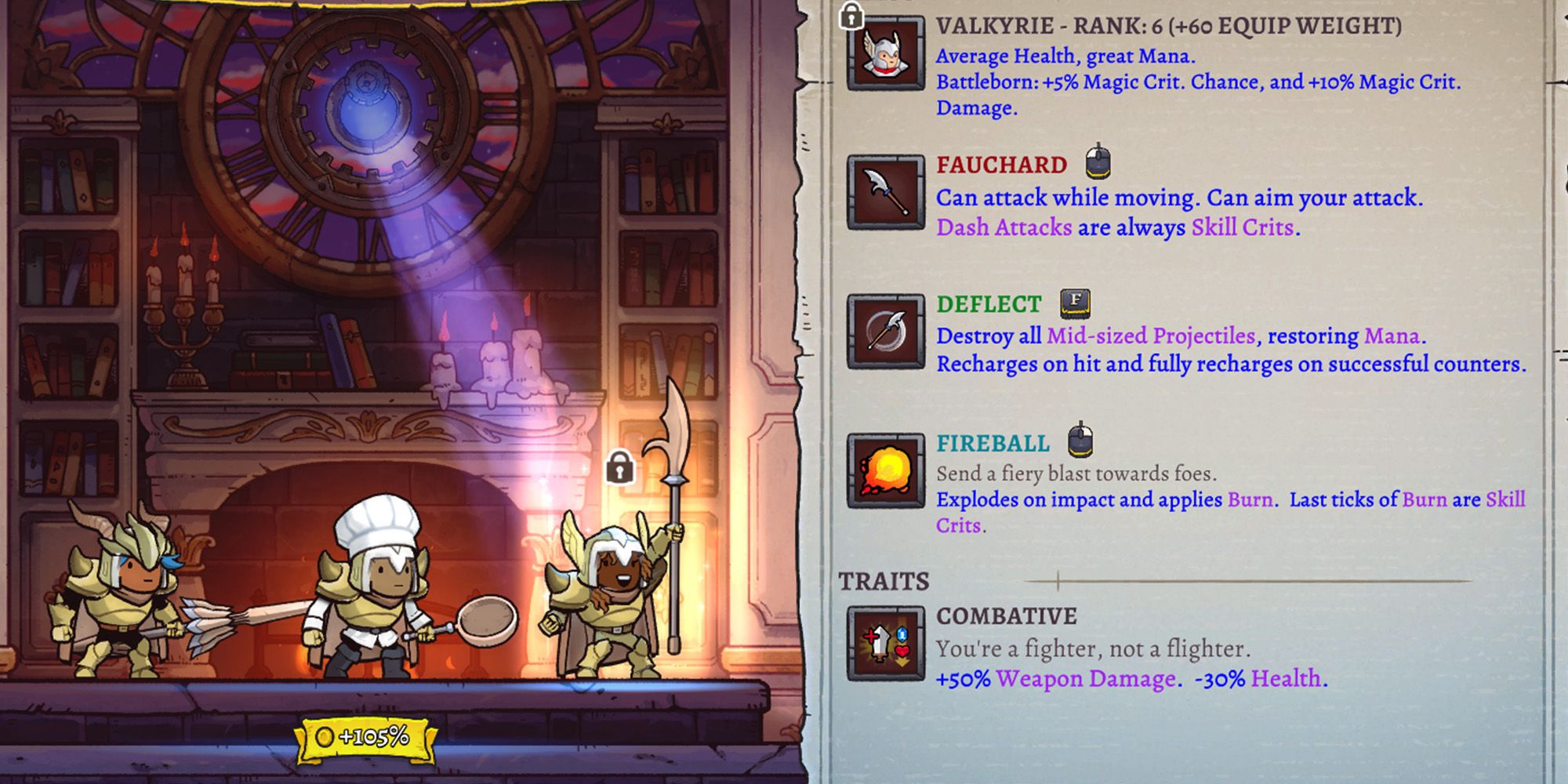 Combative is an extremely powerful trait that comes at a high risk. The trait gives your weapon (though not your spells or your class skill) 50 percent more damage, but it reduces your max health by 30 percent. This can be especially powerful for the Dragon Lancer, whose high armor makes it easier for them to compensate for the lost health, or the Chef, whose class skill lets them regenerate their health.

Relics that increase your max health will not count Combative's 30 percent decrease in their calculations, so you'll benefit from them a lot more than you would expect. 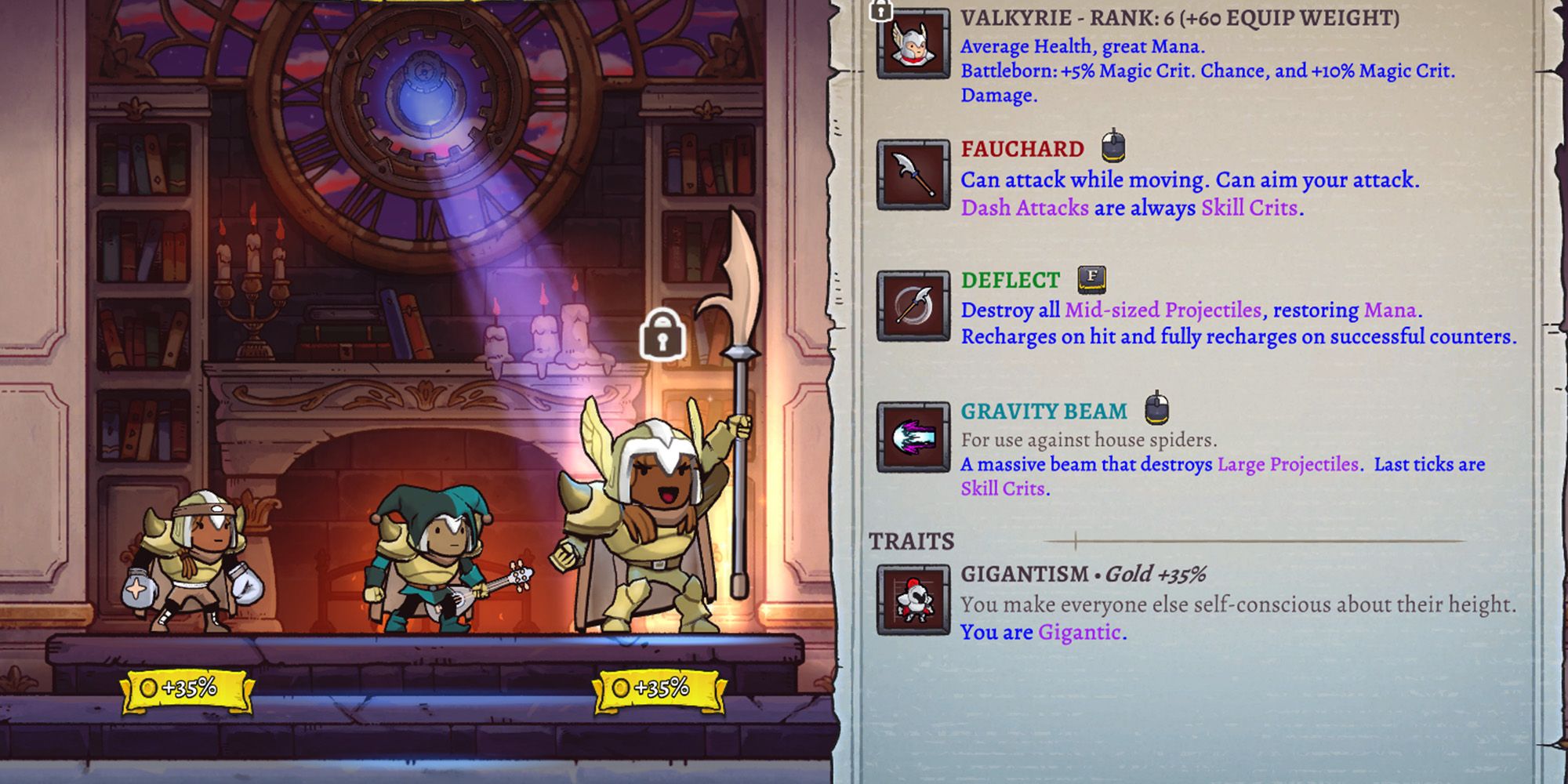 But this size increase also has a hidden upside: it makes your weapons bigger too. For example, if you're using the Shinobi, whose katana already has the longest range of any weapon in the game, the weapon can hit from much further away with Gigantism. 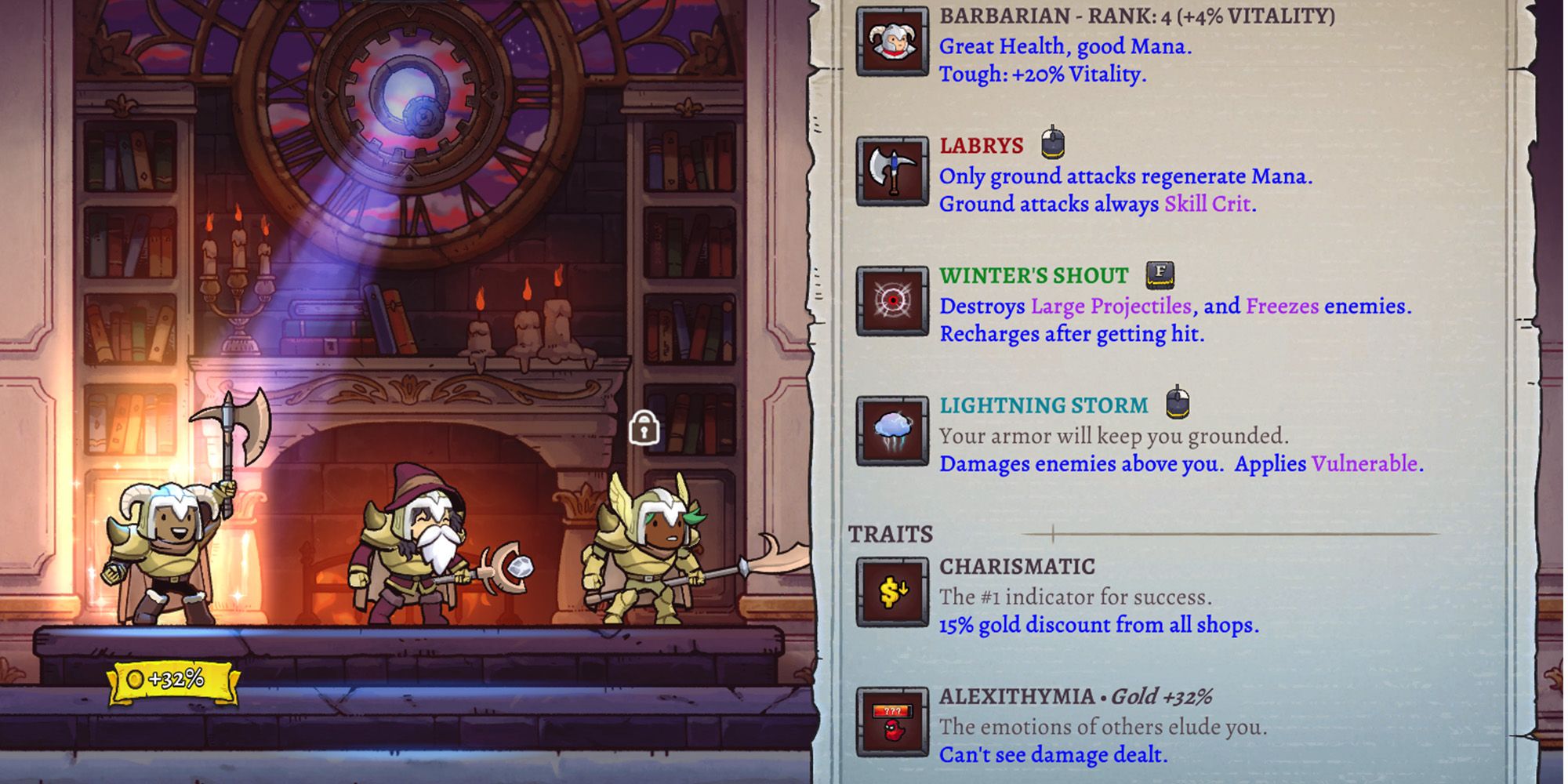 Charismatic is unique in that it doesn't impact how you travel through the castle. Rather, this trait reduces the amount of gold you need to spend at the Blacksmith and Enchantress shops before you enter the castle.

You'll have to get a little lucky with this trait. You won't get a lot of gold to spend at shops every time you explore the castle, so Charismatic won't always be worth it. It also doesn't reduce the amount of Ore or Red Aether you need to spend, so be aware of that when purchasing from shops.

4 Pacifist: No Fighting, With One Exception 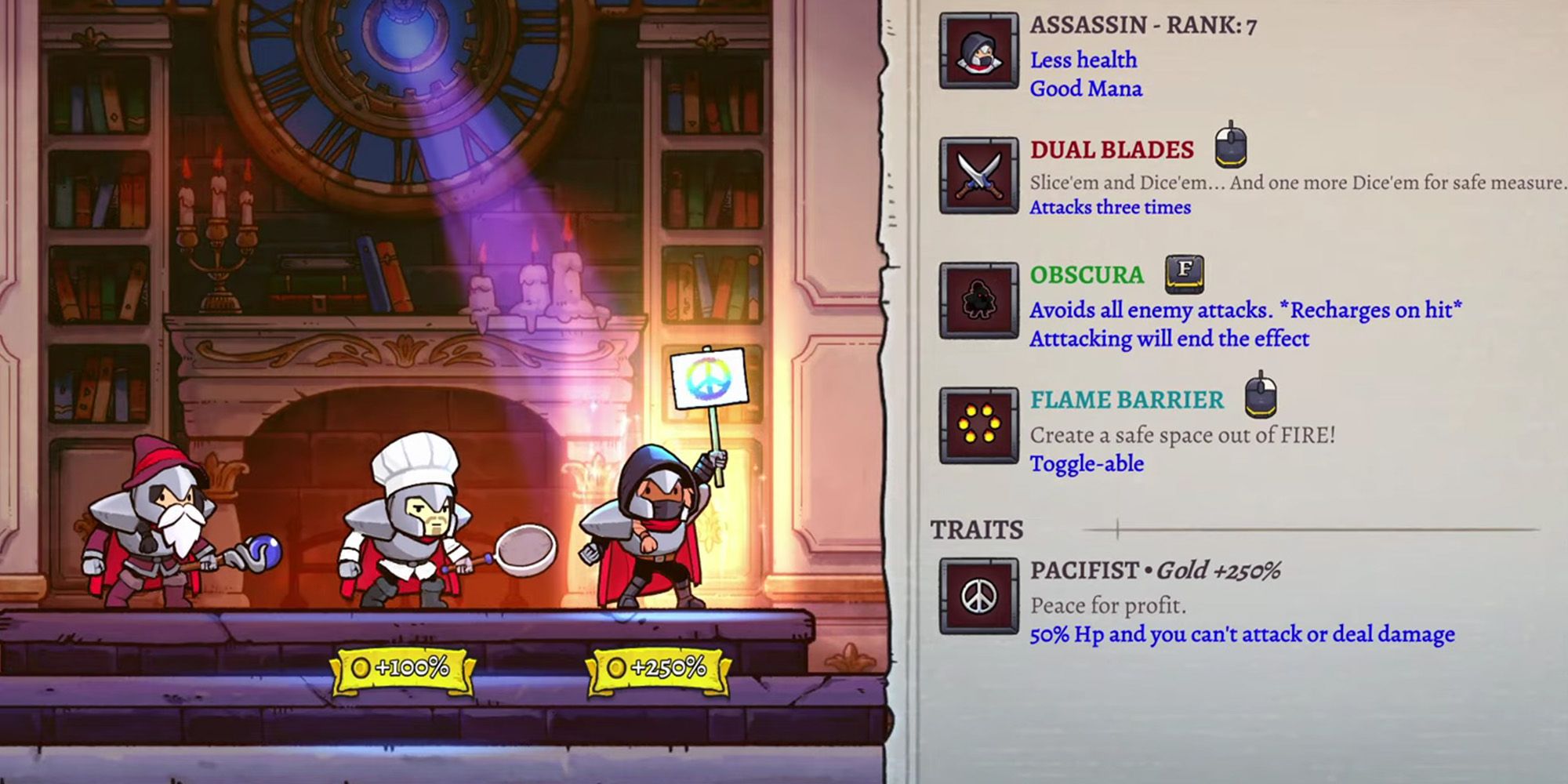 The Pacifist trait seems counter-intuitive at first. You get a massive gold bonus, but you also get 60 percent less max health and your weapon is replaced with a peace signpost that deals no damage. It also prevents you from using spells and class skills that deal damage, and it makes spin kicks unable to harm enemies.

So how can this trait be any good? If you pass by a Curio shop in the castle and happen to pick up a weapon (though not a class skill or a spell), the Pacifist trait turns into the Pacifier trait. This lets you attack enemies while keeping Pacifist's other effects, effectively giving you a massive gold boost for reduced health. Unfortunately, you can't complete the game without attacking, so no Pacifist runs for you. 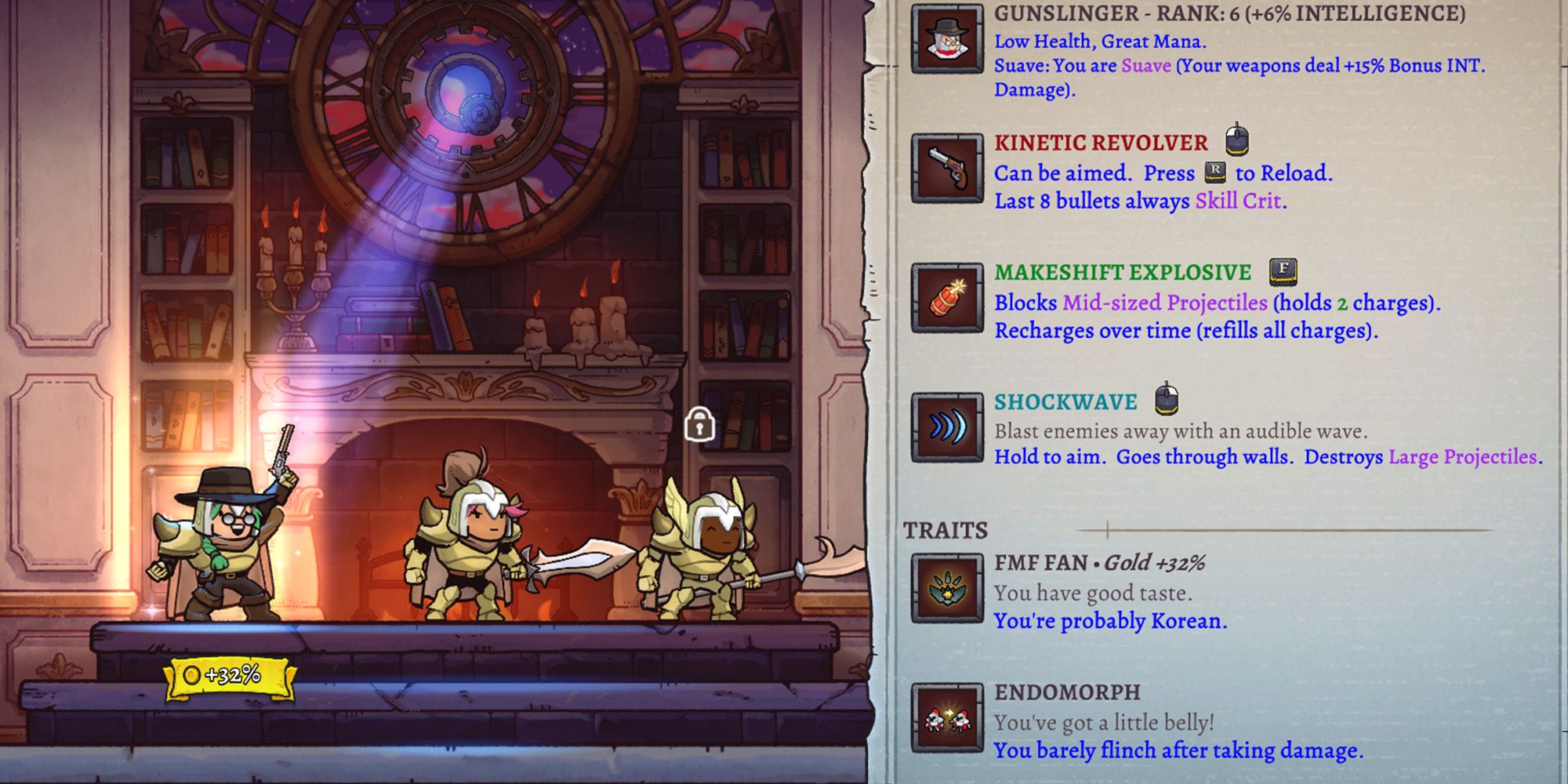 FMF Fan is a reference to one of Cellar Door Games' other titles, Full Metal Furies. The game features side-scrolling multiplayer gameplay in the same vein as Castle Crashers, though it involves military characters rather than fantasy knights.

Most traits that give you a gold boost have some kind of debuff, but FMF Fan has no such debuffs. The trait gives you a free, small amount of bonus gold, which is refreshing given the annoying vision-obscuring or health-lowering debuffs of some other traits. 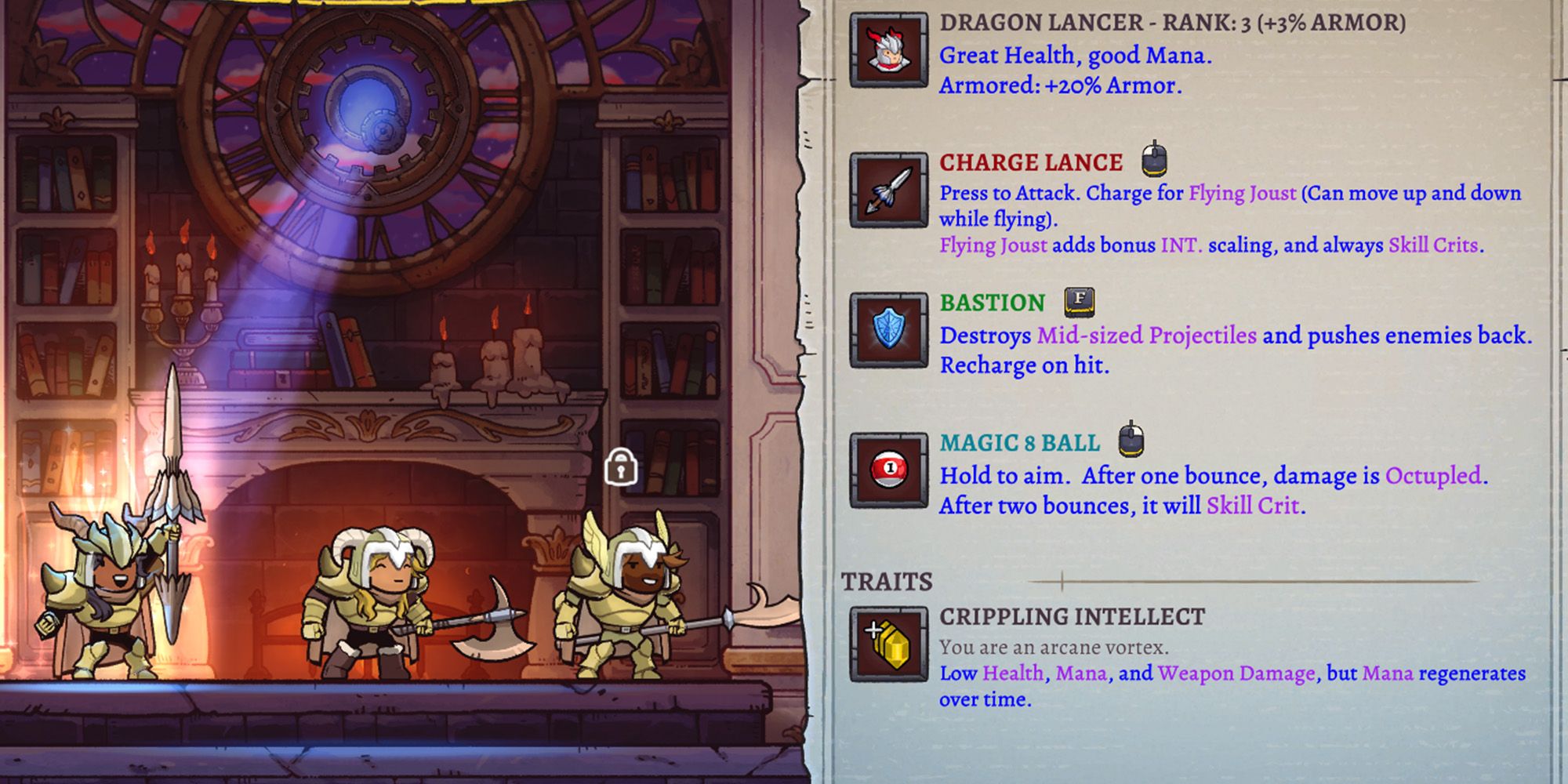 Because every heir has some form of mana regeneration in Rogue Legacy 2, spells have become much more viable. The Crippling Intellect trait takes that viability one step further, as in exchange for less max health and mana, and less weapon damage, you passively regenerate mana.

Since classes like the Mage and the Astromancer already have great mana regeneration, this trait may not be powerful with them. You'll be better off using Crippling Intellect with classes that have high health, like Barbarians, Dragon Lancers, and Boxers, to cancel out most of the negative effects.

1 Disattuned: Much Harder To Get Hit 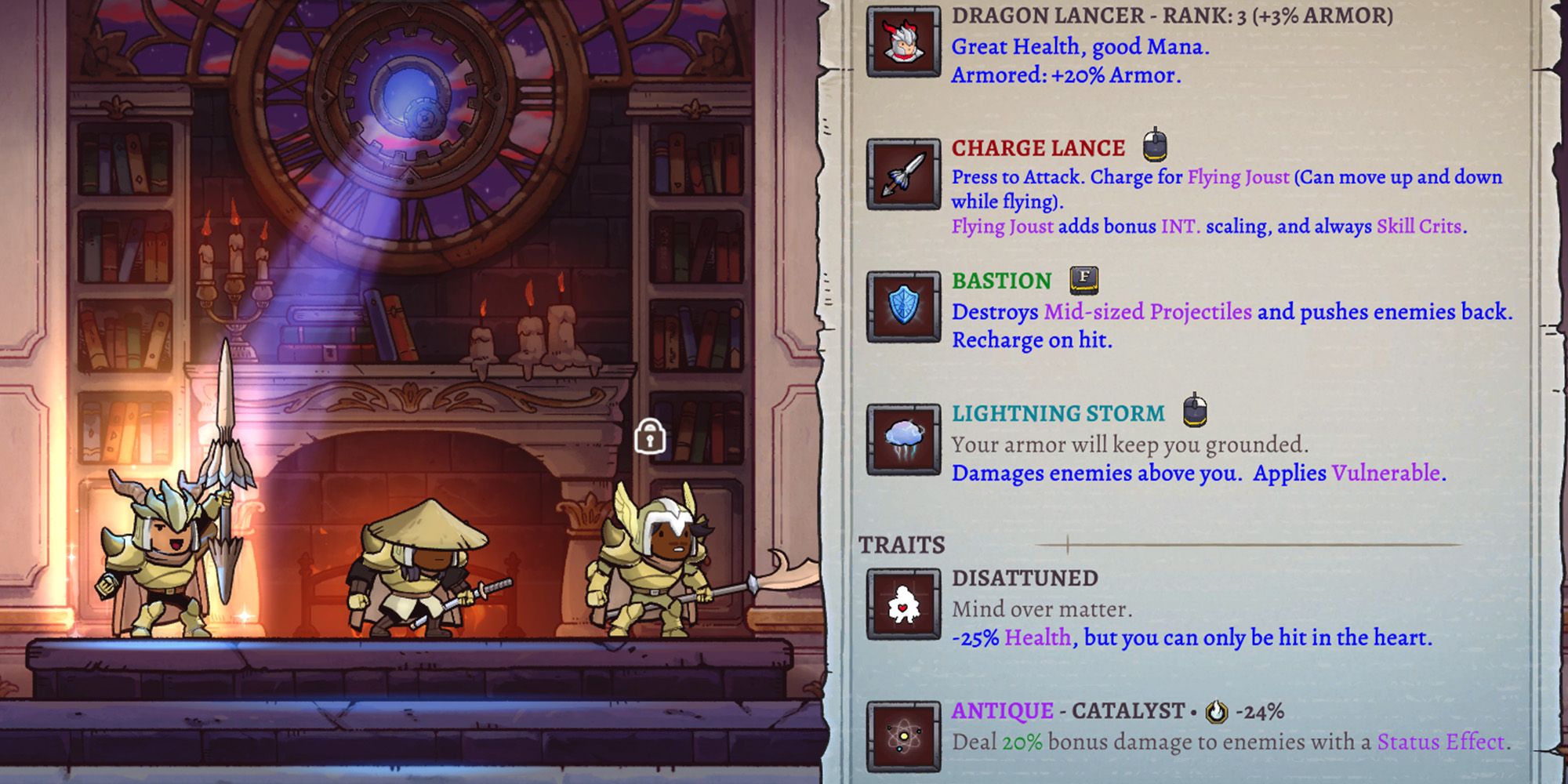 This Undertale reference turns your character into a black silhouette, making you invulnerable everywhere except for the heart at the silhouette's center. The heart is very small so you'll be able to avoid some enemy projectiles and traps more easily, but you'll still be able to take damage from spikes.

Disattuned reduces your max health by 25 percent, but the invulnerability of the trait more than makes up for this reduction. While only a subtle nod to Undertale, it's one of the best traits in the game, so it'll always be worth taking.