With over 700 items, 34 characters, 22 endings, and at least a dozen final bosses, The Binding of Isaac: Repentance is a massive game. But after wading through all of its content, you may feel like Edmund McMillen and his team of developers didn't add nearly enough. Luckily, they also added mod support to the game in 2017, and mod creators have been able to implement everything from original items and characters to entirely new sections of the game.

But arguably the most useful mods are those that make small quality-of-life fixes. Adding accessibility options, revealing hidden information, and fixing some mechanics that are downright annoying are only some of the great things mod creators have been able to do. 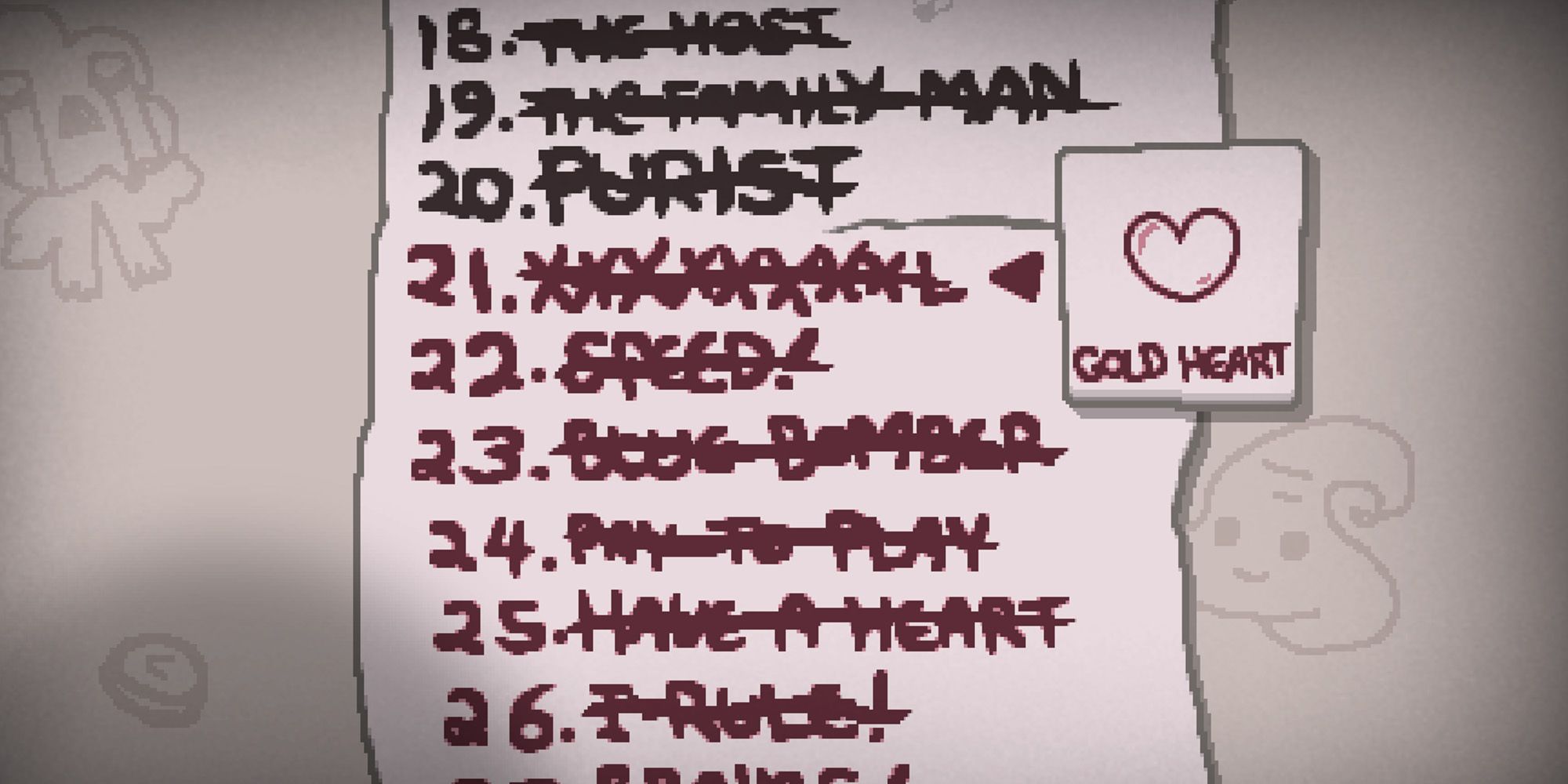 As much fun as the main game mode is, there are many achievements and features that can only be unlocked by completing Challenges. Some of these unlockable features include special items, powerful cards and runes, and upgrades for characters. While they can provide great benefits, the unlockable features often have no logical connection to the Challenges, which can make it tough to decide what Challenges you want to complete.

The Visible Challenge Unlocks mod offers a simple solution. By hovering over the name of a Challenge, you will be able to see exactly what you will unlock by completing it. No need for the Binding of Isaac wiki this time.

9 Hanging Dream Catcher: Making An Awkward Item Easier To Use 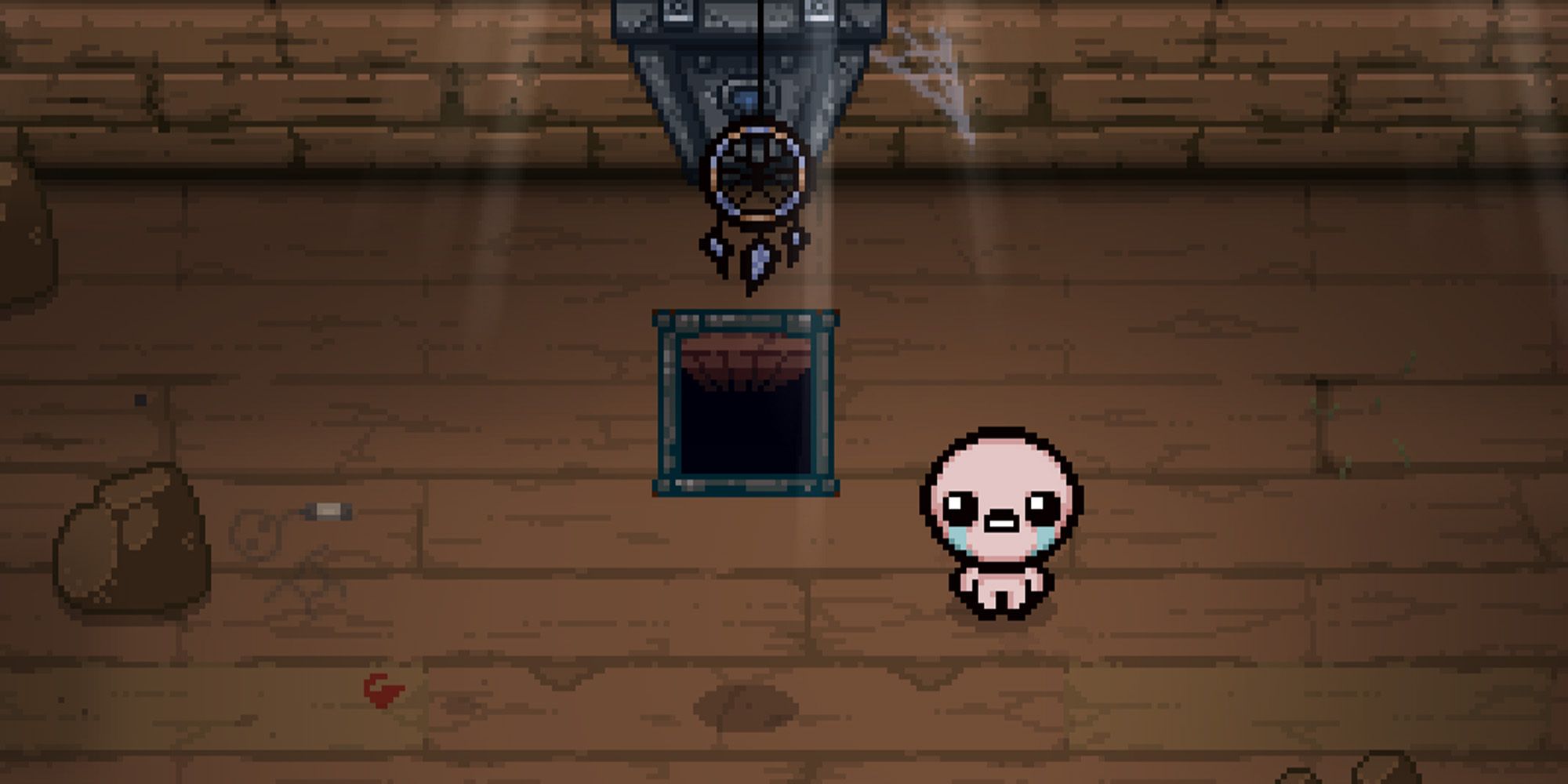 When you beat a boss and jump into the trapdoor to the next floor, you will be presented with a short dream cutscene. Since these cutscenes serve no practical purpose, you will develop the muscle memory to immediately skip them after every trapdoor. The Dream Catcher item replaces these useless dream sequences with information about the next floor, namely a preview of the item you'll get from the treasure room (which can be useful for getting Planetarium items) and the boss you'll fight.

Since that muscle memory is so ingrained, however, you may forget you have Dream Catcher altogether and accidentally skip the cutscene. The Hanging Dream Catcher mod will catch you before you make that mistake: a dream catcher will hang above every trapdoor to remind you that you have the item. Say goodbye to your nightmares and your trigger finger. 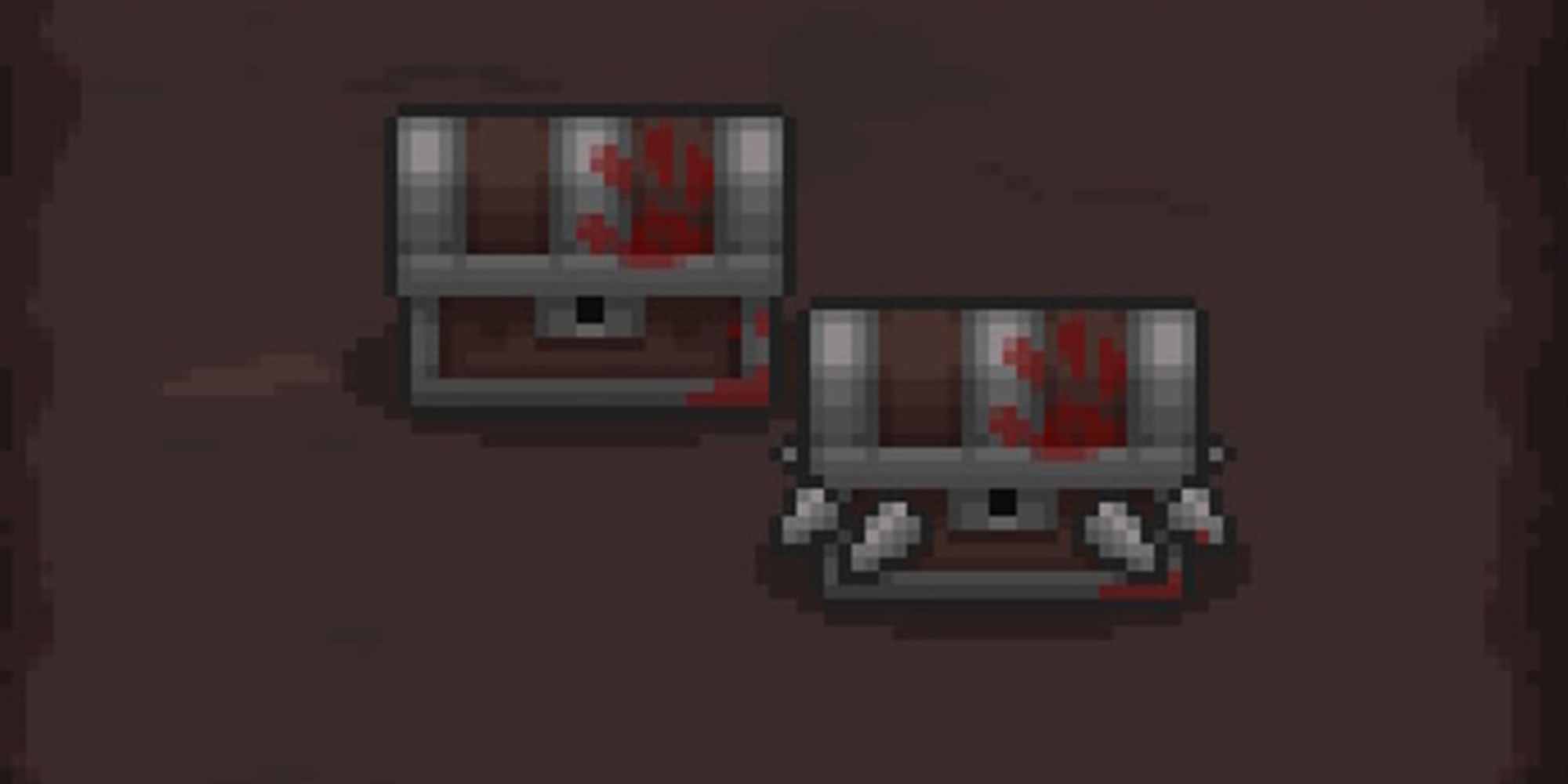 Among the new things added in the Repentance DLC was the Mimic Chest. Mimic Chests look the same as normal chests, save for the small bloodstain in the bottom right corner, and while both types of chests give similar rewards when opened, Mimic Chests will also reveal their hidden spikes and deal damage to you. The two look close enough that even the most experienced players can accidentally hurt themselves.

The Gruesome Mimics mod is here to fix that. In addition to the small bloodstain in the corner, this mod plants a bloody handprint on all Mimic Chests to make the mimicry more obvious. You can now live happily knowing your Lost runs are less likely to end because you put your guard down. 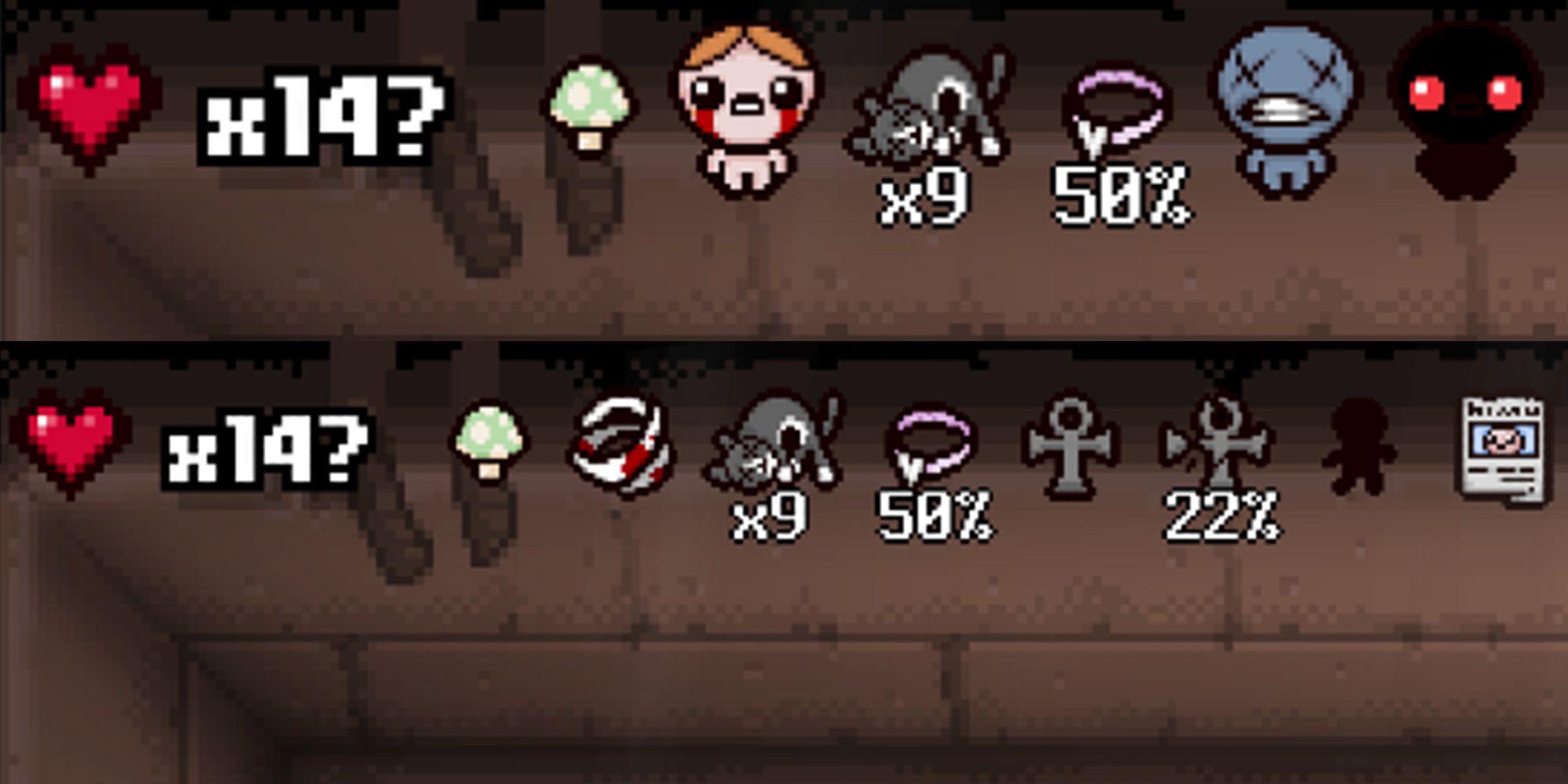 Extra lives are not uncommon in The Binding of Isaac. Some items will give you stat boosts when you use an extra life, others will revive you as a different character, and one item will even give you nine extra lives. Every time you grab one of these items, the number of times you can revive will be added to a counter on the right side of your hearts, but this counter won't distinguish between different revive mechanics. Figuring out how you will revive can sometimes be an impossible task.

With the Detailed Respawn mod, all your extra lives will be displayed in full detail. Not only will you know the exact source of your extra lives, but you'll also know exactly in what order they'll activate and which character you'll become, if any, which can help you maximize the benefits. 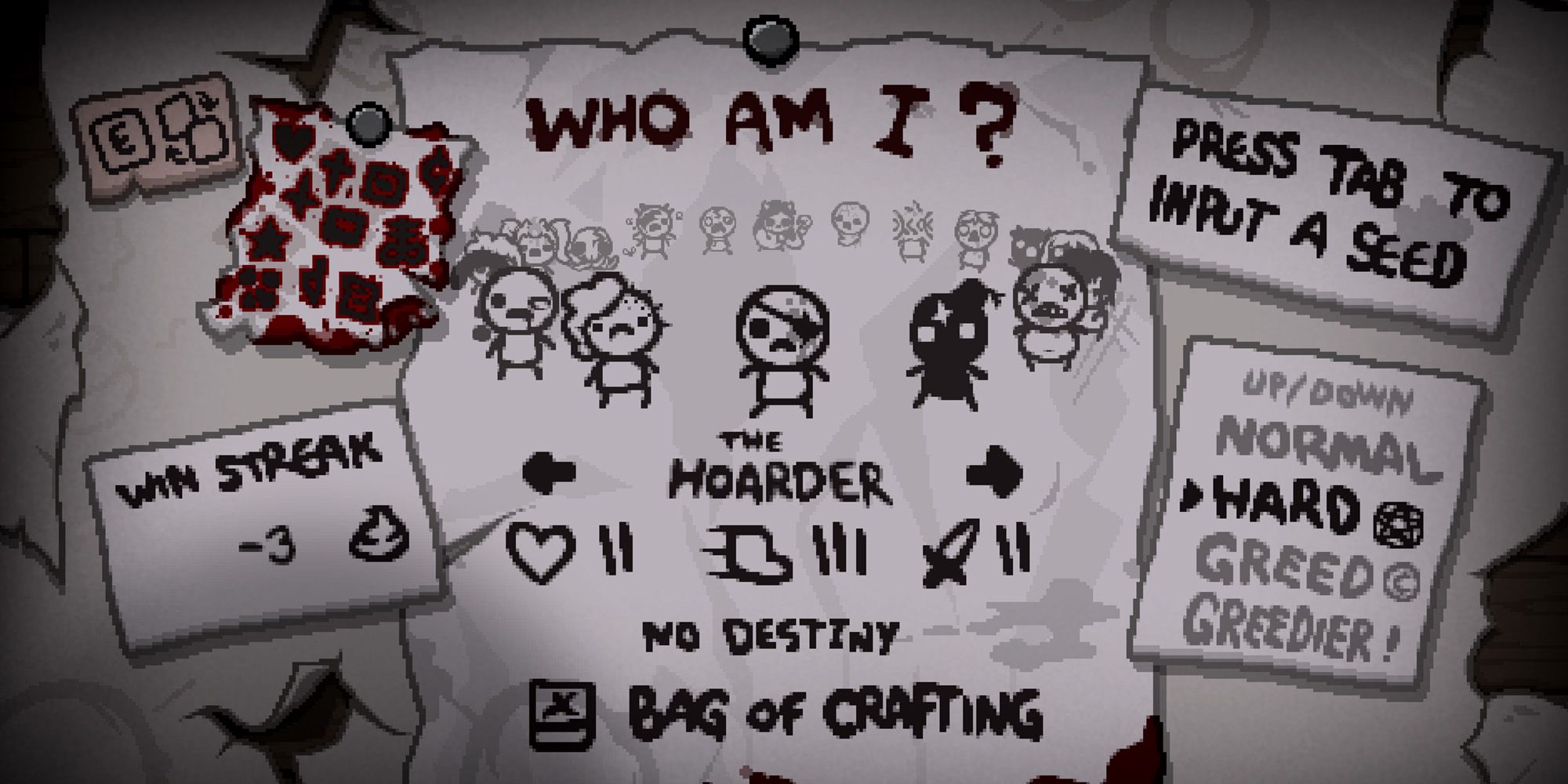 Of the 19 new characters added in the Repentance DLC, 17 are alternate versions of the original characters, also called Tainted characters. In-game, these alternate characters have the same names as the original ones, which feels underwhelming given that they all have such unique gimmicks.

With the Tainted Character Alt Names mod, these alternate characters are given names based on their associated achievements on Steam. These names make them appear as unique as their gimmicks make them feel. For example, Tainted Cain is called The Hoarder because he's all about collecting lots of loot, much like the Miner from Rogue Legacy. 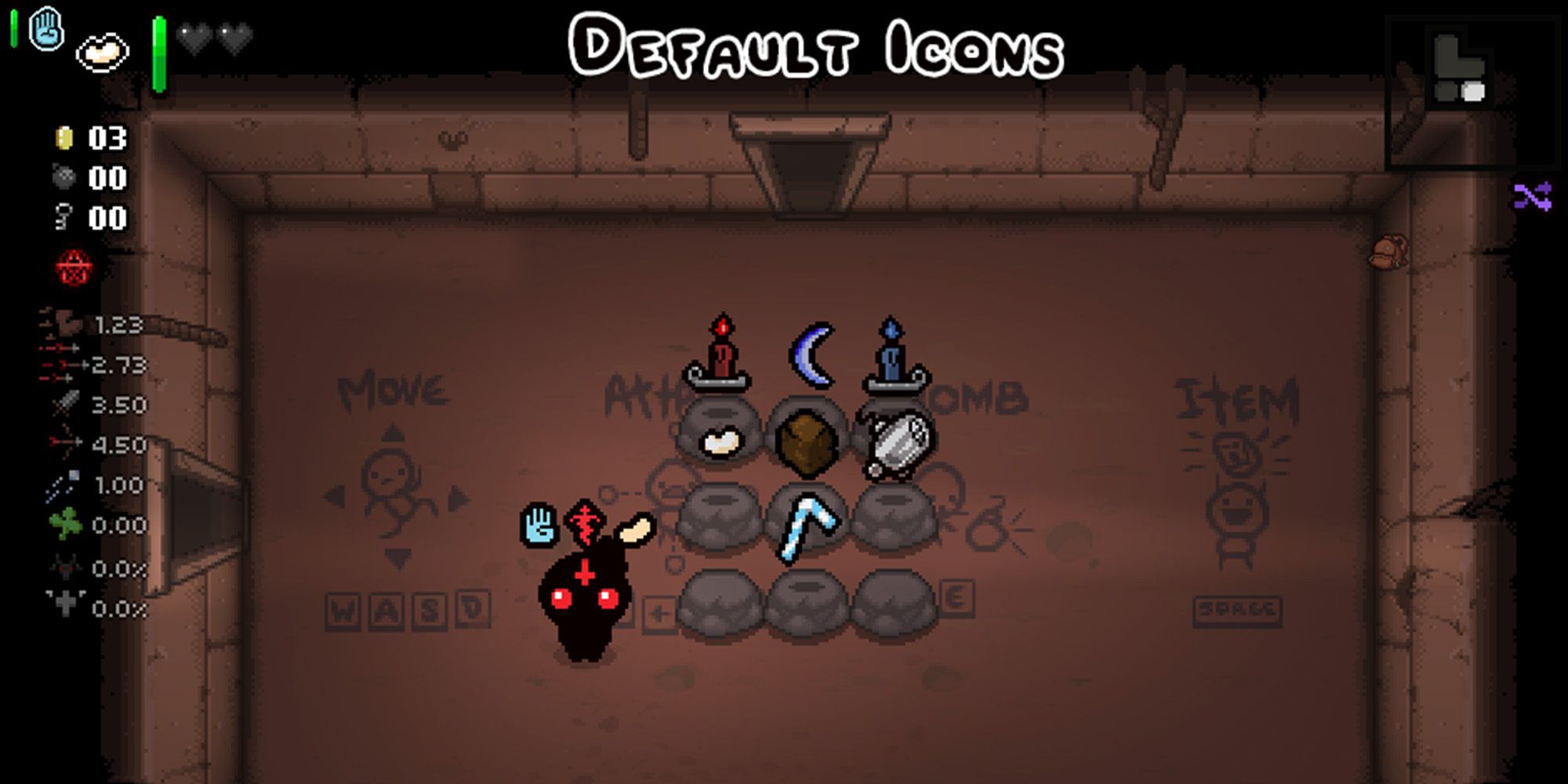 While most active items recharge by clearing rooms, some items recharge over time. And with the addition of more experimental items in the Repentance DLC, these timed active items have started appearing more. But because the game can be so chaotic and fast-paced, constantly taking a peek at the corner of the screen to see if your active item is recharged can waste precious seconds needed to dodge enemies.

The Timed Active Icons mod makes an icon appear above your head when your active item is ready. Since you're sometimes able to hold two or even three active items at a time, each item has a unique icon, which lets you know exactly which items are charged. 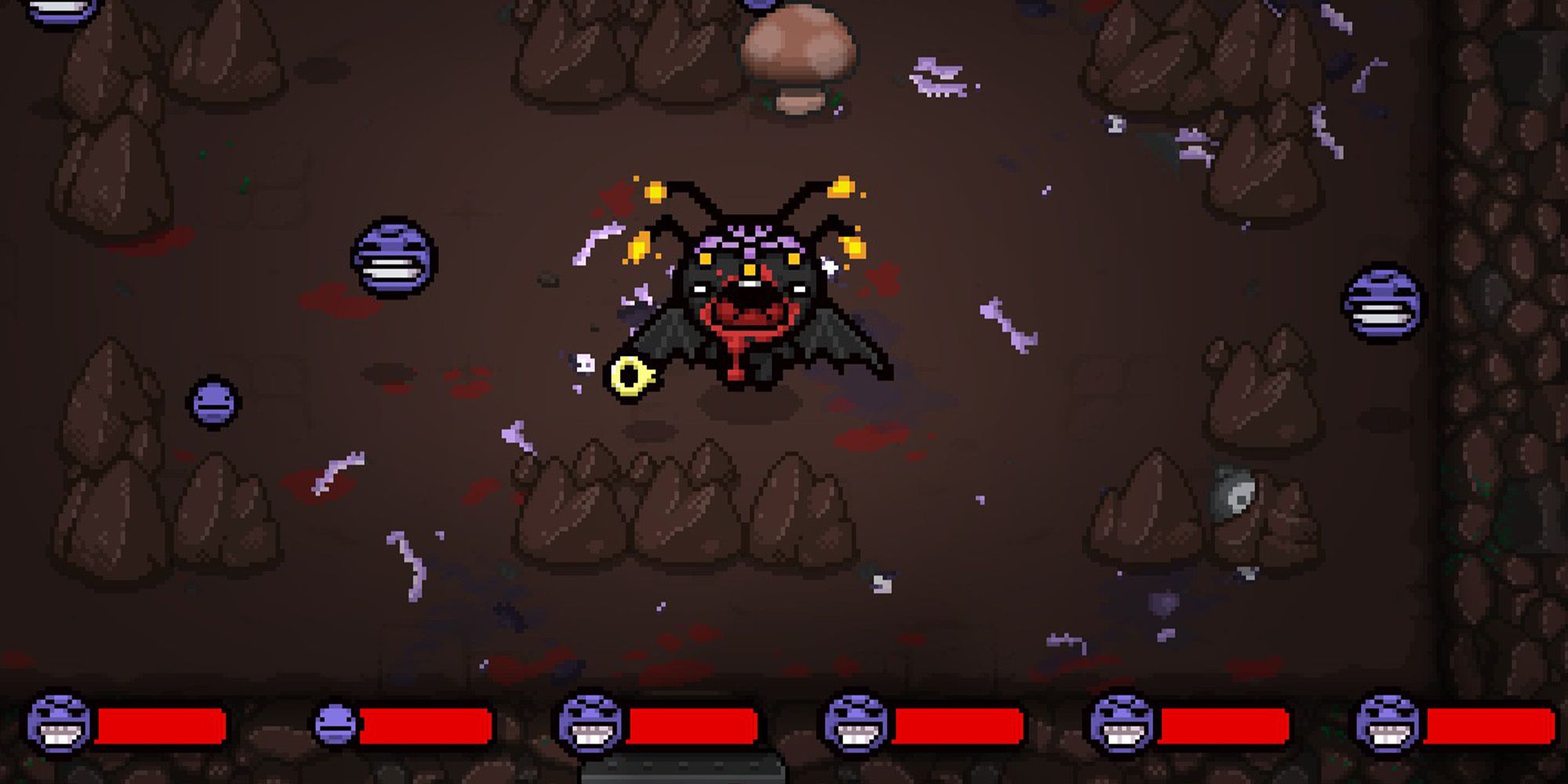 Not knowing how much health a boss has can be frustrating and demotivating. While this isn't a problem most of the time in The Binding of Isaac, final bosses like Mother, Mega Satan, and The Beast have no health bars, which can make the fights that much more stressful. With the Enhanced Boss Bars mod, you'll be able to see exactly how much damage you need to deal to these end-game villains.

But the mod doesn't stop there, since it also modifies the boss bar when you're up against multiple bosses. Whether the boss splits apart in the middle of the fight like Larry Jr. or Envy, or whether you have to fight two enemies at once like Sisters Vis, this mod will be able to accommodate your every boss bar need. 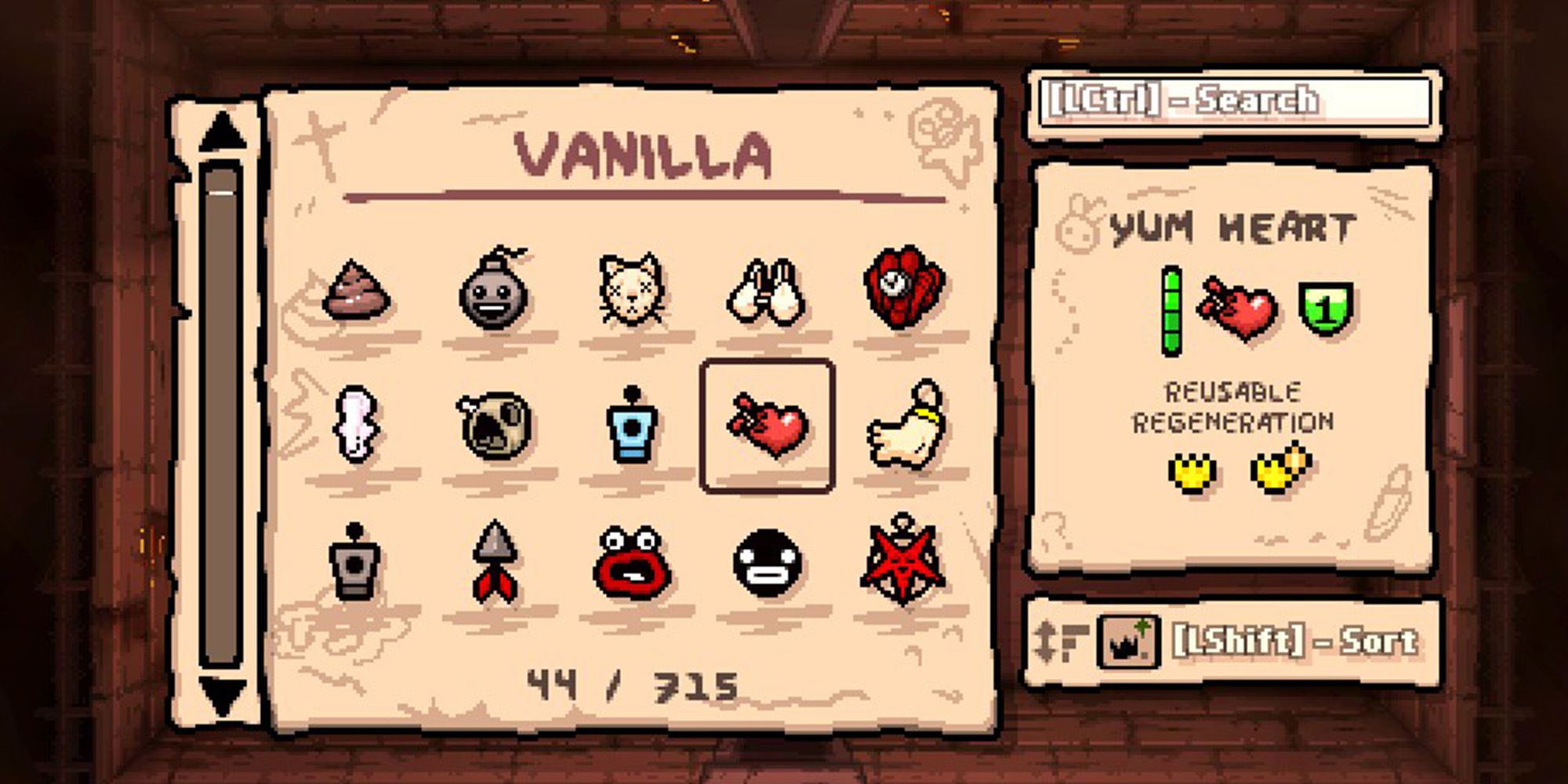 The Encyclopedia mod is a self-proclaimed in-game Wikipedia. By pressing the C button (or both control sticks on a gamepad), you will open a book containing practically all the knowledge of the game's universe. This includes descriptions of all characters' unique mechanics and their completion marks, every trinket's effect, and every item's abilities, synergies, and hidden uses.

The mod is also compatible with items and characters from other mods, provided they include an encyclopedia entry in their files. No matter if it's your first or your thousandth hour playing Isaac, the Encyclopedia mod can save you a lot of research time. 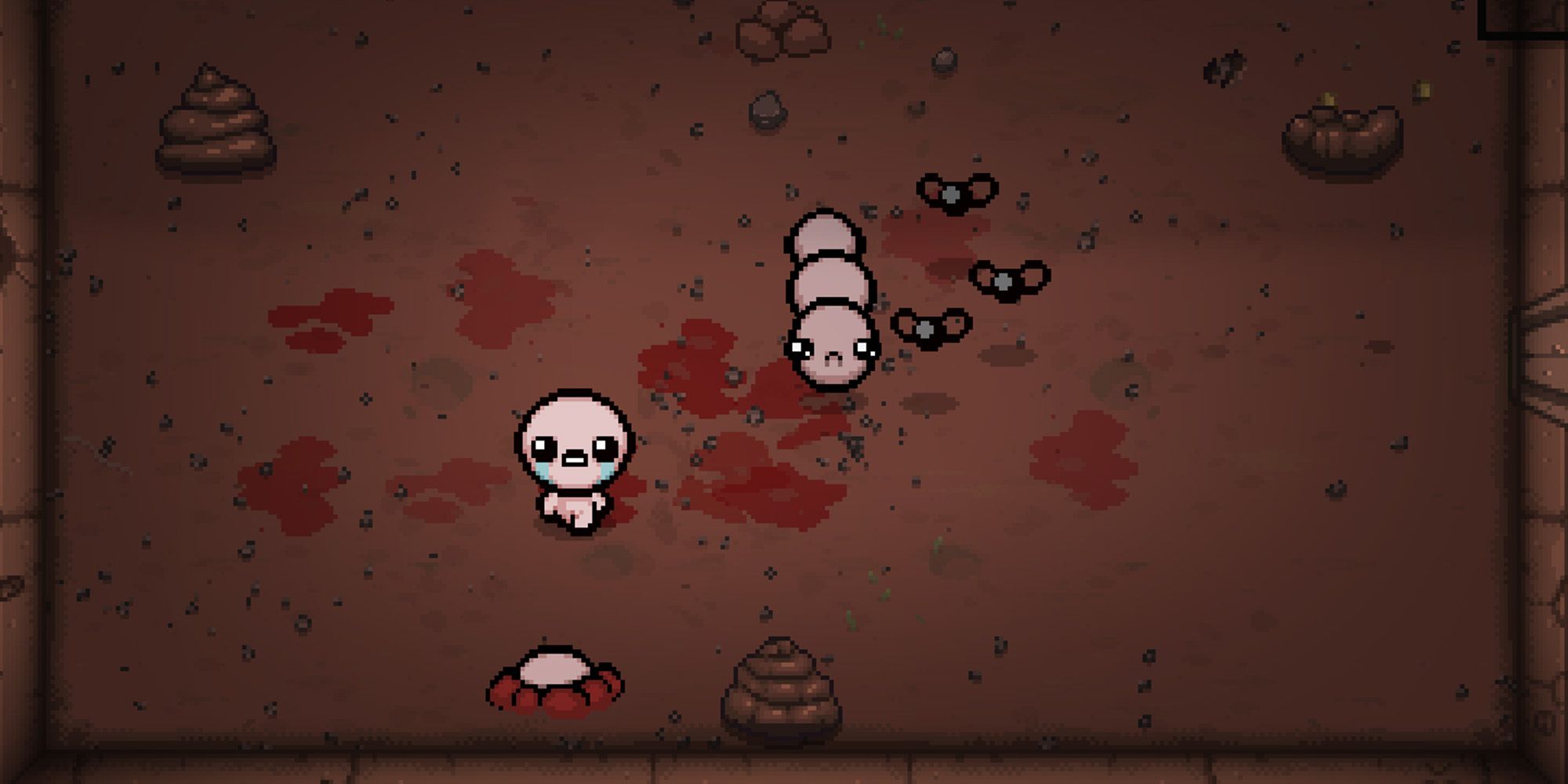 One of the most infuriating enemies added in the Repentance DLC is the Needle, which will burrow underground and jump at you from a random place in the room. Since they're already underground when you enter a room, you can't see them until they jump, so you're likely to get hit by one before you realize they're even there.

With the Clearer Hidden Enemies mod, Needles will cause rock particles to spew out of the ground while they're burrowing, making them more visible and predictable. This mod also gives this effect to bosses that hide underground like Pin, Polycephalus, and Scolex – if you're having trouble with them, this mod is well worth a download.

1 Colorblind Accessibility: Improving Visibility For All 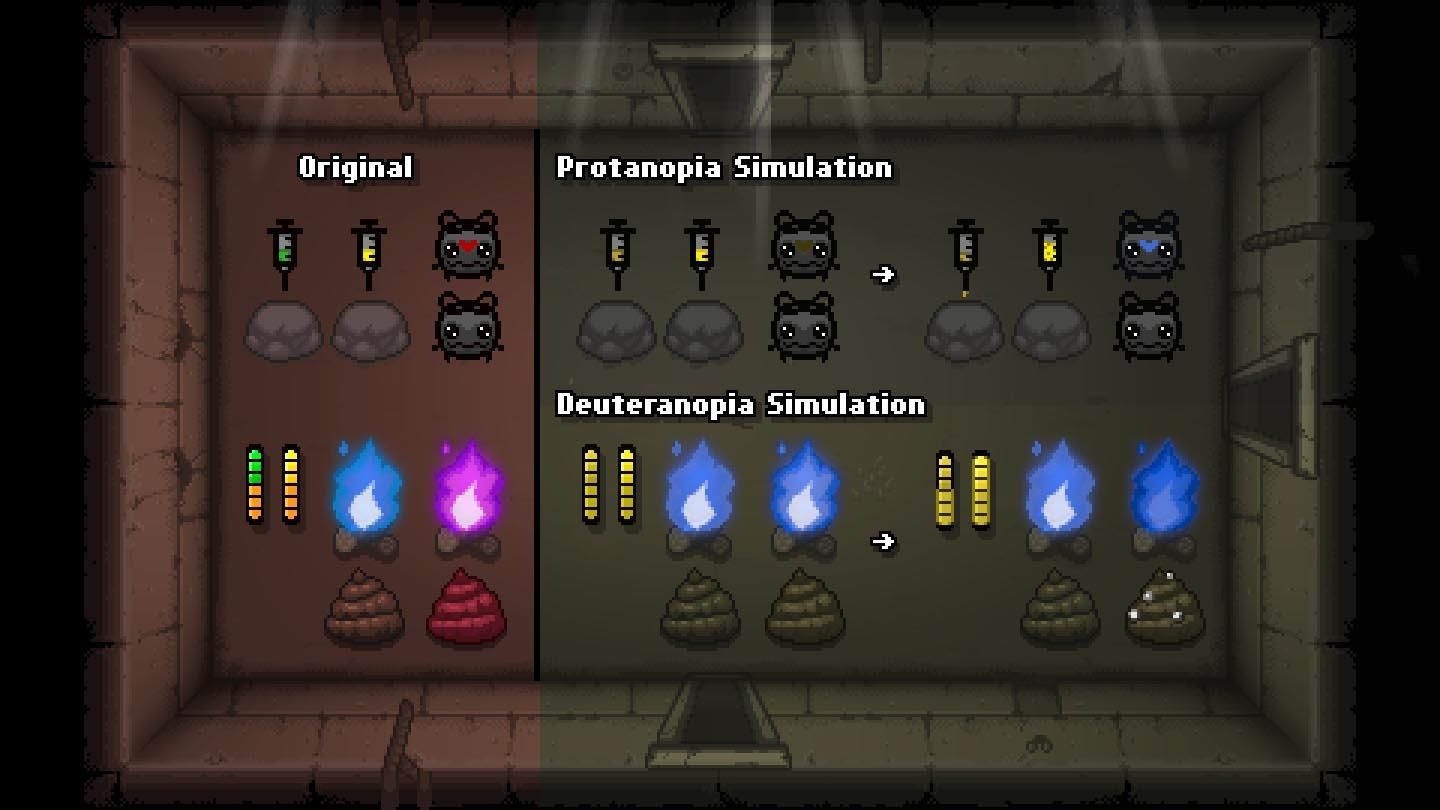 Do you have colourblindness but still want to play The Binding of Isaac? Say no more, because the Colorblind Accessibility mod is here! This mod overhauls the graphics to make certain game elements more distinguishable from each other. The changes are as big as new body parts for enemies or new shapes for items, and as small as modified colour intensities for different poops and fires, or new outlines for different hearts.

Of all the existing quality-of-life mods, Colourblind Accessibility is one that would be highly appreciated if it were implemented into the base game.