The thing you don’t really get about The Callisto Protocol until you get your hands on it is just how exhausting it is. I know that doesn’t sound like a compliment, but I mean it as one. Striking Distance Studios has crafted one of the most oppressively hostile and laborious survival horror games ever. Dead Space is a Sunday afternoon in Disneyland compared to the 40 miles of gore and shit The Callisto Protocol makes you crawl through. It’s immersive in the way a nightmare you can’t wake up from is – you know it’s a dream, but every nerve in your body is firing off as though it’s real. Even as a Resident Evil super fan, I finished my hour-long play session in desperate need of a cigarette and a ray of sunshine. I thought I knew what to expect, but this merciless abyss of carnage is a full-tilt assault on the senses right from the jump. I assure you this is not hyperbole: The Callisto Protocol isn’t just a next-gen survival horror, it’s a meaningful and much-needed evolution of the genre.

The sensibilities The Callisto Protocol builds on from Dead Space are immediately apparent. One principle is to keep the UI as minimal as possible to maintain a seamless and inescapable experience. Traditional elements like your health bar and inventory menu are diegetically baked, for example. But The Callisto Protocol takes minimalism so much further that Dead Space ever did. Things like objective markers, mini-maps, and environment scans that are considered conveniences in most modern games are entirely absent here. Instead, you have to rely on the environment to be your guide.

That doesn’t mean there’s bright green arrows on the floor directing you where to go or glowing chalk lines on everything you can climb though. There’s a logic to the level design and a sophistication to the signposting that makes you feel like the developers have respect for your intelligence and your ability to figure things out on your own. I got lost in prison’s circular hallways and interconnected passages occasionally, but my wandering somehow always led to a worthwhile discovery like a hidden healthpack or secret audio log. Finding your way around feels like a critical part of the experience. It’s built as such an immersive experience that it doesn’t feel like I’m lost, it feels like Jacob is lost. Everything that happens, whether scripted or not, seems like an intended function of the game.

Speaking of Jacob, Josh Duhamel does a great job performing the typical video game action hero, at least from what I’ve seen so far. Jacob is the kind of character that will crawl hands and knees through a river of shit, narrowly avoid getting split in half by horrors the human mind can’t even comprehend, and respond to it all with something glib like, “I fucking hate this place.”

At the same time, there’s a surprising amount of personality in his animations. When the monsters make a racket in the distance he will look around nervously, and when you make him walk through standing viscera he’ll hold his arms and shiver. There’s a groundedness to the character that helps make the world feel more fully realized. You can almost feel the weight when he lifts debris, or the pain in his joints when he crawls through vents and clambers over ledges. As he fights his way through Black Iron Prison – even in this short sample from early in the game – you feel the physical toll this nightmare is taking on his body.

Immersion is, by definition, something you have to experience for yourself, but there’s a clearer way to understand how The Callisto Protocol is elevating the genre. Survival Horror is largely defined by the concept of resource management. In Dead Space or Resident Evil, you only have so much ammo and so many healing items, and you have to be judicious about how you use these limited resources or risk running out when you need them the most. In almost every survival horror, ammunition and health points are the primary resources you're asked to manage, while other resources like inventory space and save points supplement. The Callisto Protocol goes a step beyond the conventions by applying the concept of resource management to things like time, space, and even endurance. This is expressed through the combat system, which is far more demanding than I expected.

You can’t, or shouldn’t try to shoot your way out of every situation. Guns, or at least the starting pistol, isn’t really designed to take down enemies with precision hits the way weapons in Dead Space or Resident Evil are. Instead, you want to use your bullets to stagger enemies to either create space if you’re encroached, or open them up to close combat. Your natural instinct when a mutated horror starts running at you is to back up and shoot, but this is just going to lead to an empty magazine and a pissed off mutant.

Instead, you have to fight that urge and stand your ground. You can dodge attacks by tilting the left stick to the side, or block by tilting it back, but it's essential that time these moves perfectly in order to counter. When you hit an enemy with a melee combo, you’ll open up weak points that you can shoot for bonus damage. You also need to shoot tentacles when you see them sprout out of certain enemies or they’ll transform into faster, more lethal monsters. Your gun is better thought of as a tool than a weapon. It can buy you time and help you create space, especially when multiple enemies attack at once. 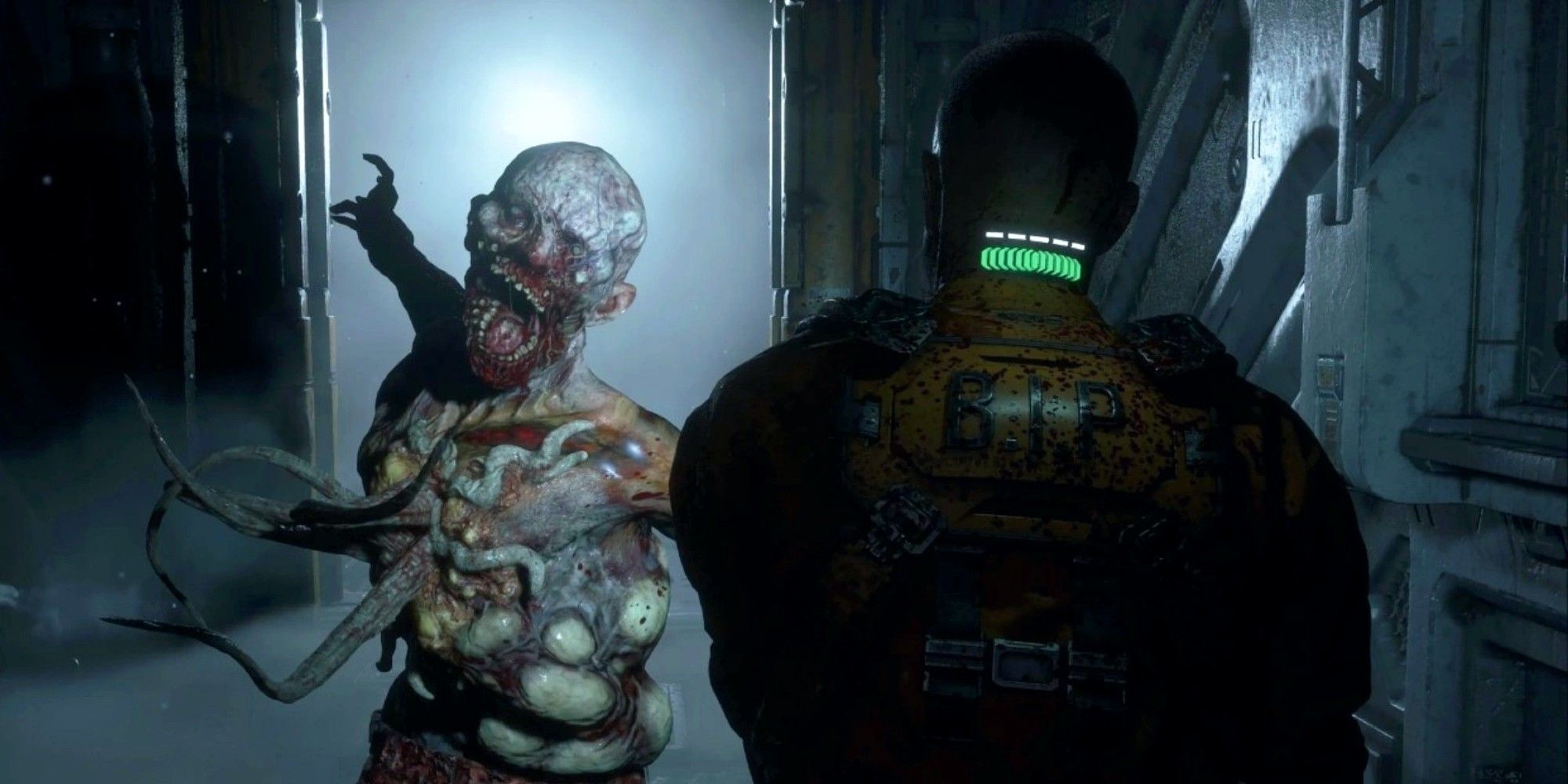 None of this is easy, but The Callisto Protocol isn’t hard just for the sake of hardness either. Every fight is a desperate struggle for survival that can’t be taken for granted. The trigger resistance on the DualSense makes every swing with the stun baton feel powerful, but it's also quite tiring. I found myself needlessly dumping magazines on some enemies because I was literally getting too fatigued to fight hand-to-hand with them. Stamina is another resource you have to manage, but not in a gamey, stamina bar way – in an actual, physical way. Whenever I finished a long sequence of brutal fights and watched the exhaustion overtake Jacob, I felt it too.

Immersion isn’t about how realistic the gore is – though it’s plenty realistic here – it’s about how connected you feel to the game and how real the world feels while you’re playing it. The Callisto Protocol creates immersion on both an emotional and physical level. After only an hour with the game, I can already tell that the contributions it’s making to survival horror are profound.