In a very strange move, The Callisto Protocol's season pass contains a DLC pack that will apparently add 13 new grizzly death animations into the game.

If there's one thing that most people knew Dead Space for, it was the multitude of ways that its protagonist, Isaac Clarke, could be mercilessly killed. Each of these deaths had a unique and horrifying animation, which practically encouraged players to let themselves be killed by the Necromorphs. The Callisto Protocol has made it clear from the very start that it aims to emulate this approach, something that it's taking one step further with its season pass.

As reported by VGC, The Callisto Protocol's Steam page was recently updated to include more information on the contents of its season pass, which is included in the deluxe edition of the game. Although most of the content in the pass is pretty normal, such as a unique skin and the promise of "story content", there's one very strange inclusion worth singling out. 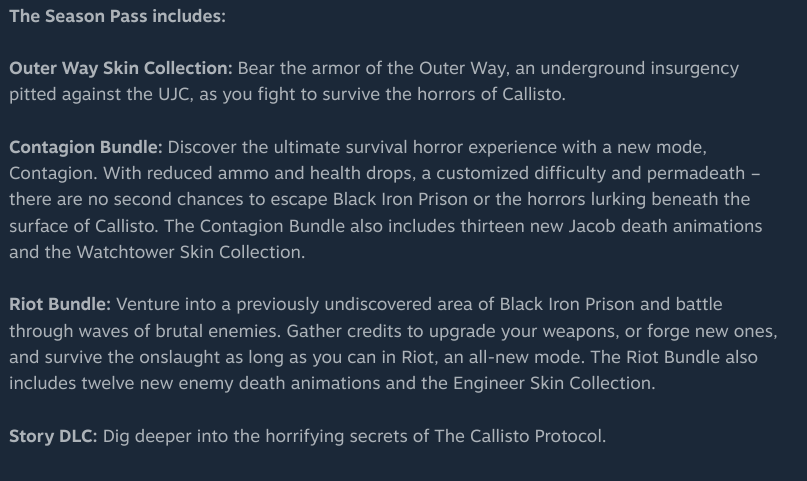 It's not too surprising considering a significant portion of The Callisto Protocol's marketing has revolved around the fact that its protagonist can be killed in a bunch of horrible ways (including an unlockable trophy for finding every way to die), but it's still a pretty weird thing to be adding into a game.

The description for the DLC also doesn't mention whether these death animations will be exclusive to the Riot and Contagion modes. It sounds like new enemies won't be a part of Riot and Contagion, so it seems more likely that they'll be added to the game as a whole instead of being exclusive.