18. That’s the number of times I jumped out of my chair while playing The Dark Pictures Anthology: The Devil in Me. 19 if we include when the postman knocked on my door and broke the spooky illusion.

Despite being a complete sucker for jump scares and possessing a terrible reaction speed, I adore cinematic horror games like this. Usually, I’d partner up with my husband for The Dark Pictures, so we can share the scares, but I had to go it alone for this time around. This meant having no one else to blame for my bad choices, and I sure made plenty of them.

I didn’t flawlessly breeze through the game with the entire cast unscathed, nor did I take that fact graciously. I tried to cheat by immediately reloading every scene when someone died to try again with the hopes of saving them. It didn’t always work, though. As always with Supermassive’s episodic anthology, some deaths are predetermined based on choices you made much earlier. Sorry, Kate. 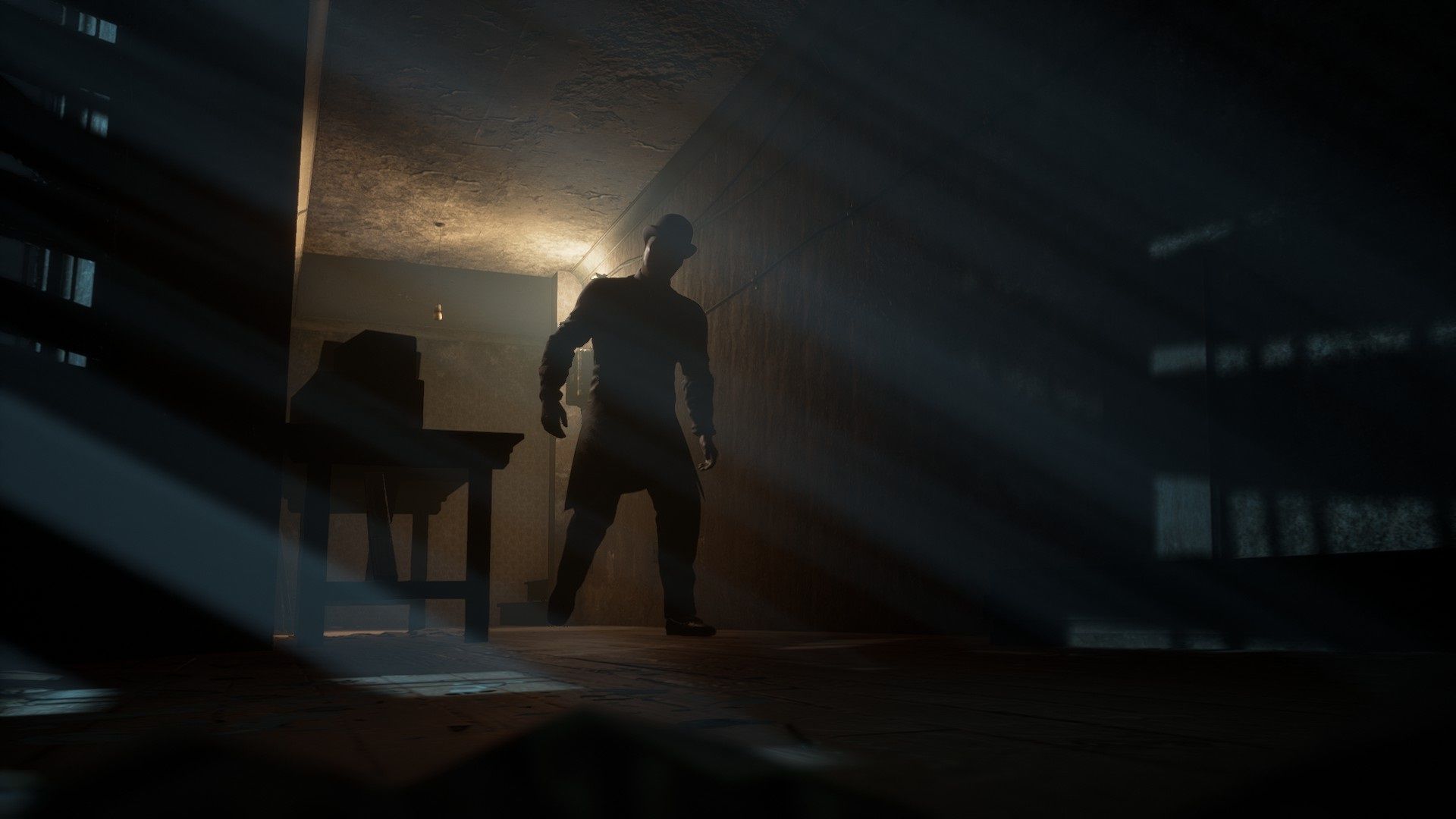 I had a blast with The Devil in Me’s story and setting. I’d argue it’s the most interesting of the anthology to date, but I don’t know if that’s because I’m super biased as I binge-watch true crime documentaries all the time. While I feel like it could have benefitted from a few more plot twists, as it was a little predictable at times, the story and gameplay unfold in a way that ensures it’s never bland or boring. It was nice having a plot basis that felt a little more tangible, too — H.H. Holmes, the game’s inspiration, was very much a real person — but the environment you find yourself in is where the game truly shines.

One thing I loved most was the number of times you’d come across a button and question, ‘Should I really push it?’. After all, who can resist a big red button? Well, actually, I did quite often as I’m a big scaredy cat. Given the animatronic and trap-filled setting, I had enough scares resulting from button presses without wanting to risk any more. There’s one moment where an animatronic shouts at you to press the button in a room the killer had recently vacated, and there was no way in hell I was doing that. I want to live, thanks. 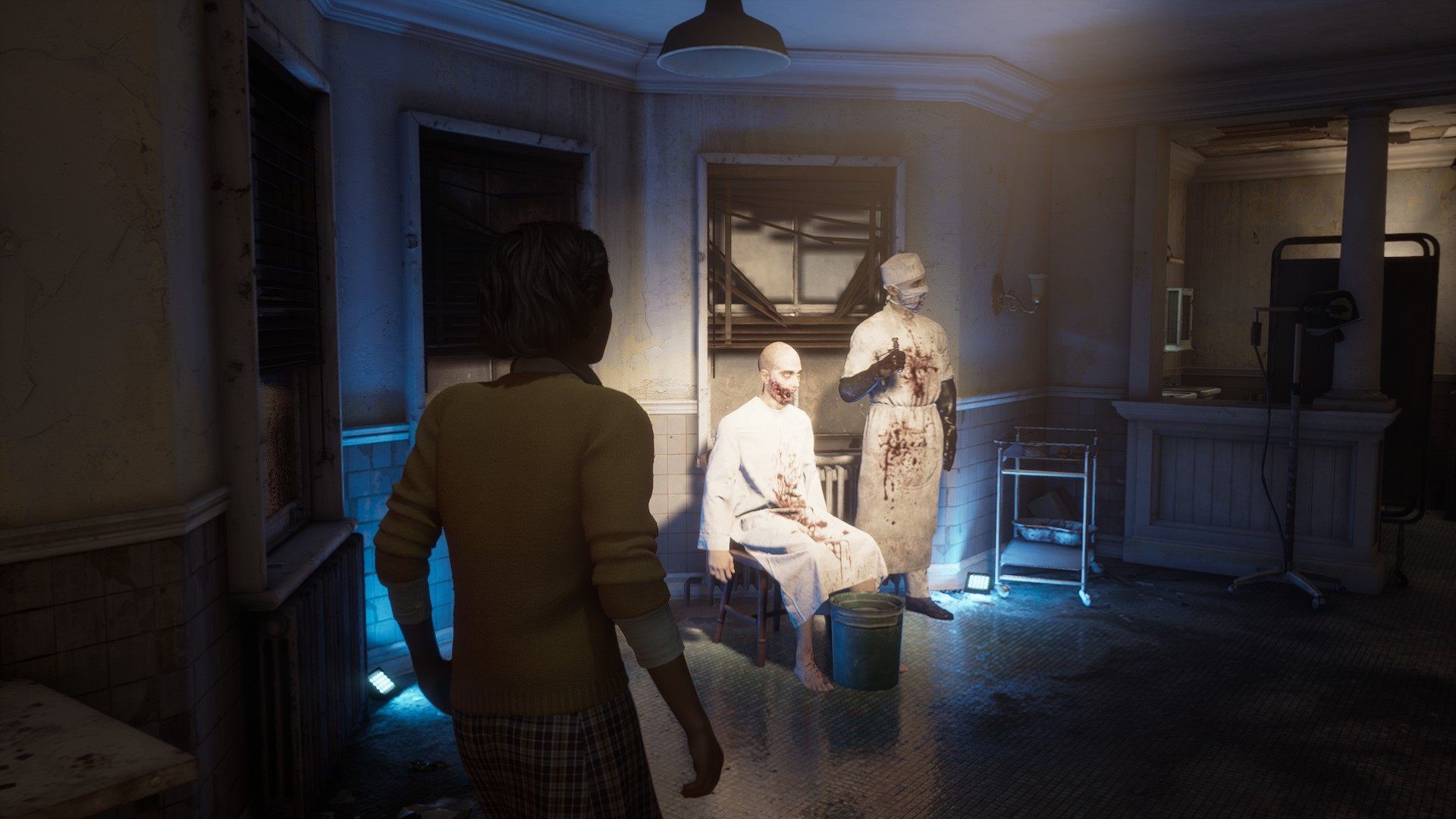 The Devil in Me expands on what its predecessors offer in several ways. There’s a greater focus on exploration, but in true The Dark Pictures style, your decisions matter even here. If you decide to skip a door to return to it after exploring another hallway, think again. On top of getting locked into a pathway because the story progresses, the killer often moves the walls around you, paths change and can cut you off from optional routes or rooms.

I missed out on a couple of rooms I aimed to visit as a result, and with the addition of an inventory of tools in The Devil in Me, I wondered if I had lost out on something potentially useful. It’s a fun change of pace having tools to use, but I’ll admit, I didn’t use them as much as I could have. The novelty wore off quickly, and I managed to get along without using them often, so they felt a bit moot as a result. A shame, because these sorts of games are begging for an additional bit of mechanical complexity to help enhance the formula.

I didn’t even realise I had a pencil until I got stuck on a code puzzle and wandered for long enough for a hint to pop up telling me to use it. I also found an extra bit for my camera, and other than scaring the hell out of myself for setting off the flash when the killer walked by (don’t worry, he doesn’t notice this, apparently), I’m not sure what the camera even did, nevermind with the upgrade. I took a photo of a dead guy. Prime holiday snap, right there. I think they’re mostly tied to uncovering optional secrets and obols, rather than directly affecting things. Mostly. There was at least one that seemed to be put to good use, but you’ll have to discover that for yourself. 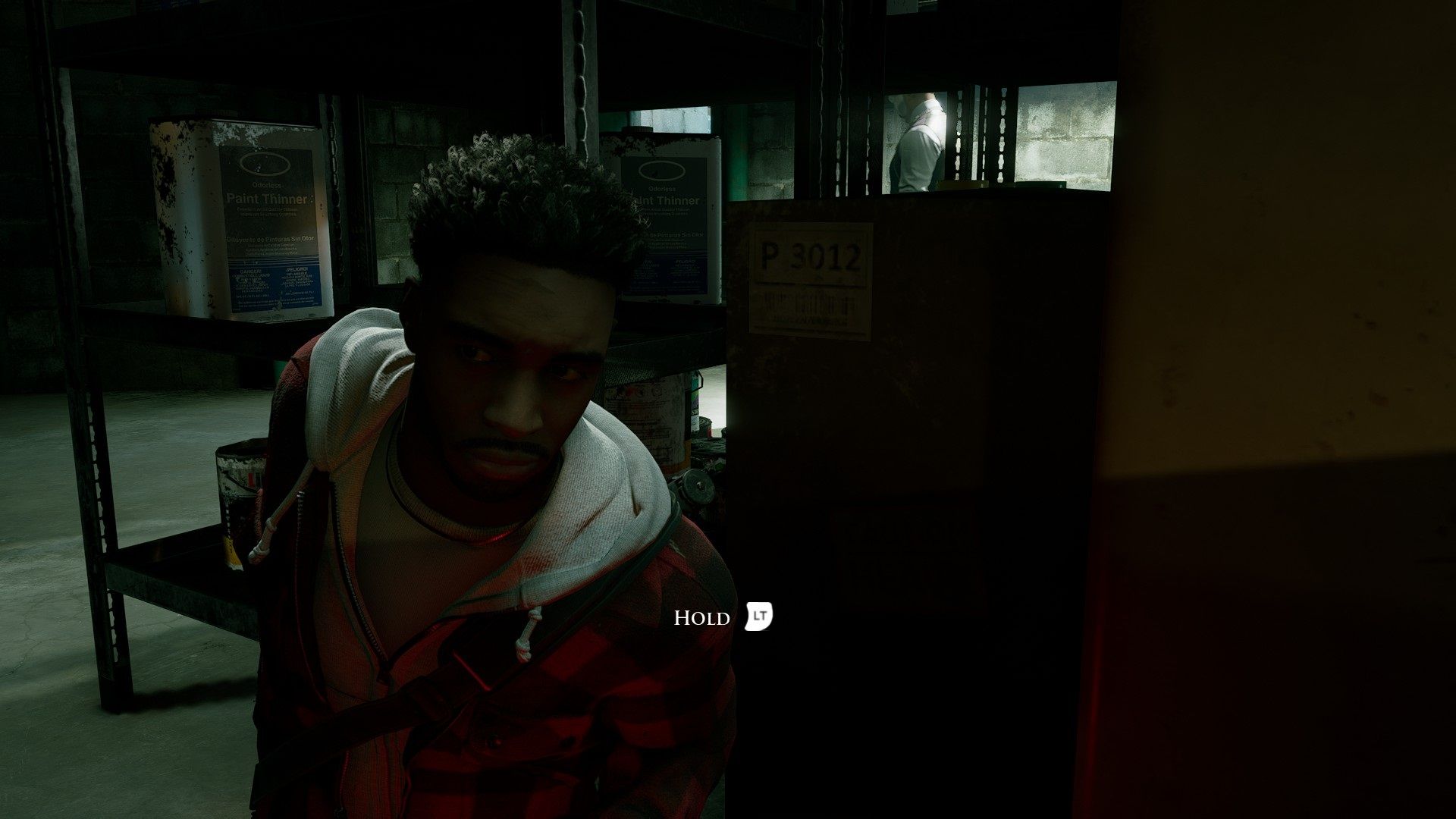 You’re not simply skulking around a scary environment anymore, as now you can run for your life too. Some of The Devil in Me’s highlights are tense moments where you have to run and hide from the killer. This freedom of movement to jog around anywhere was a welcome addition, making it much easier to hunt down optional tools and other potential extras.

Things can also be climbed and dragged around now. Once again, this was a fun novelty that eventually grew tiresome. It didn’t help that it could be quite clunky at times, especially when trying to drag or push furniture into position, almost like it had a mind of its own and refused to go in the right direction. New puzzle elements were hit or miss. While code puzzles that make you dig for clues were fun, the lighting puzzles were so straightforward they felt pointless.

I encountered a few blips and bugs, such as the game stuttering or the background suddenly sputtering into place through a window, but nothing overly egregious. I only needed to reload the once to fix an issue where a scene suddenly had quieter dialogue. It seemed to mistakenly have a digital effect applied, the same used when the serial killer is watching via a camera, but the gameplay was a regular section of you and your buddies just trying to survive. It was a little off-putting, and regrettably, reloading didn’t fix it. 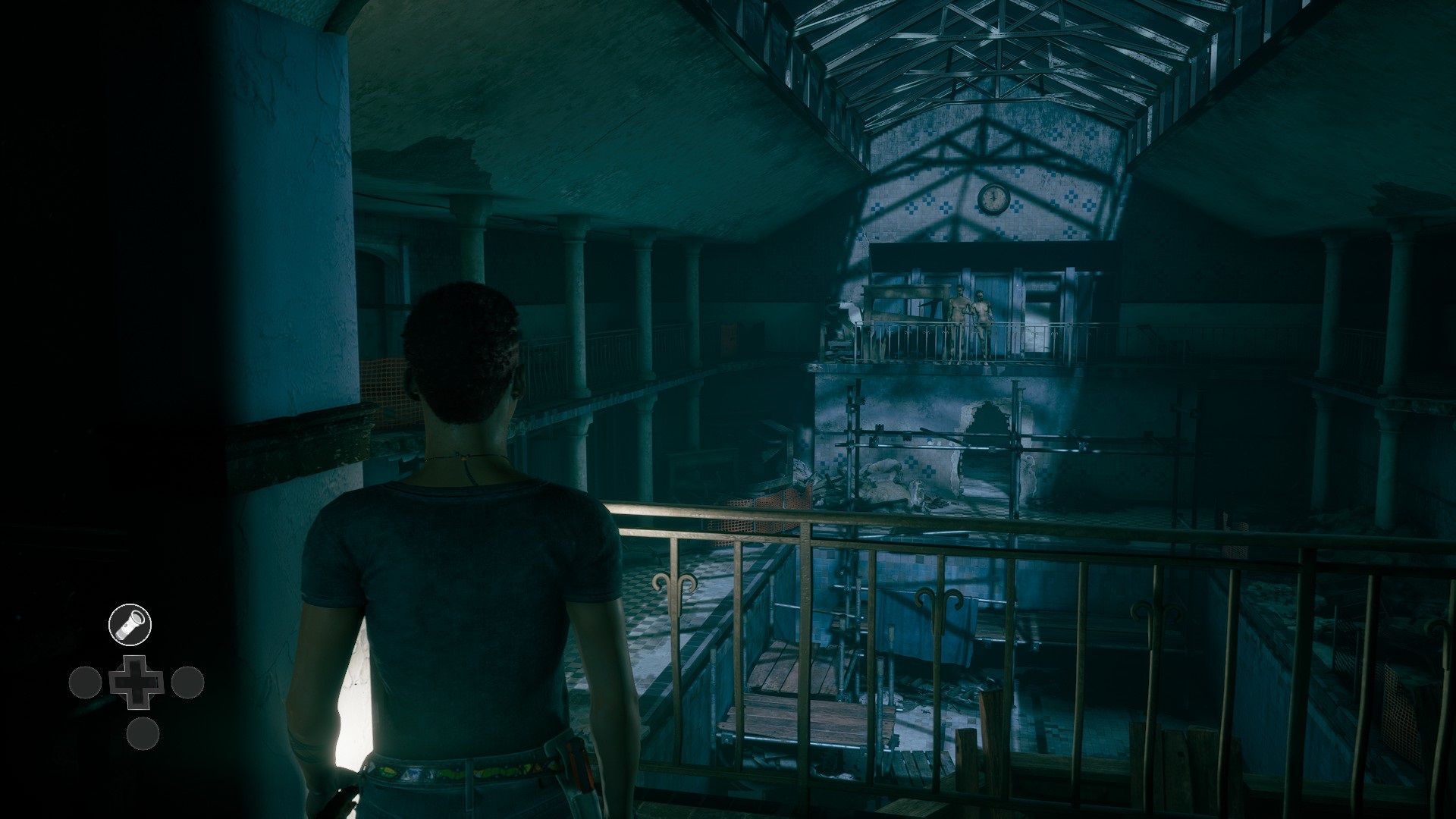 A couple of other moments also ruined my willing suspension of disbelief. The most noticeable was a scene where one character escapes the killer, and you see her with a wall clearly in the background. It then cuts to pretty much the exact same angle, but there’s just black behind her, and the killer steps out from the shadow. Sure, he probably moved a wall, but the instantaneous flicker between presto, bingo, the wall is now gone without showing it sliding away was jarring.

Another was when I descended into a cellar room to find my companion at the time, who had been behind me the whole time, already in there on the far side of the room. In a game where you encounter animatronics of the main characters, there was a split second where I questioned whether it was one of those instead. But nope. Lastly, when my final survivor regrouped with the others, I had to witness them telling one character of another’s death all over again as if it was brand new information, despite an earlier reunion with a different character already covering this. What a way to guilt-trip me further, guys.

The Devil in Me is an excellent evolution in The Dark Pictures anthology that weaves an interesting story in a complex and exciting environment that’s both fun and horrifying to explore. It’s the perfect choice for horror fans, full of tense moments, jump scares, and gory scenes. While some of the new features are a little hit or miss, it’s arguably the best title in the anthology. It could do with a little more polish in places, but it’s a game I am keen to replay to delve into the background story further, and hopefully, next time, I’ll ensure everyone lives.

Score: 4/5. A PC review code was provided by the publisher.