Sekiro: Shadows Die Twice was a breath of fresh air after Dark Souls 3 before FromSoft went back to the familiar Souls formula with Elden Ring. It forces players to learn the ins and outs of its combat system and doesn’t allow you to summon others for help. As a result, it’s widely regarded as one of the studio’s most difficult titles, but also one of its most rewarding. Throwing yourself at a brick wall of a boss until you can exploit its weaknesses with exact precision isn’t everyone's idea of fun, but this refusal to give you another option has made some of the game’s fights legendary amongst FromSoftware fans.

However, even with the game’s notorious difficulty, Sekiro’s best boss fight is a rare example of the developer choosing spectacle over challenge. Most FromSoftware games have a boss like this – an opponent that is fairly easy to overcome once you know what you’re doing, but makes your jaw hit the floor the first time you step into its arena. The Storm King from Demons’ Souls is a good example, as is Yhorm the Giant from Dark Souls 3 and Rykard from Elden Ring. They’re all fantastic fights in their own ways, but none of them match the feeling of going head-to-head with The Divine Dragon.

The fight begins in a very subdued manner (subdued for Sekiro anyway), making the Divine Dragon’s appearance later on much more of a surprise. You’re first made to take down a cabal of smaller enemies, leaping from branches to slice through dozens at a time. It’s a fight that abandons all of the game’s core mechanics, all the while leaving you slightly on edge as you wonder when the actual boss is going to show itself. A bolt of lightning strikes the ground, causing a gust of clouds to obscure your view. The mist then eventually clears to reveal The Divine Dragon itself looming over you, the scale of which is unlike anything you’ve encountered up to this point.

Instead of parrying your little heart out, the fight tasks you with grappling onto tree branches to catch lightning, which you then throw at the beast. The dragon itself is slow and predictable, making dodging a lot easier than the other boss fights. Throw enough lightning and you then have to dodge/deflect a flurry of attacks to tire the dragon out. Leaping onto one last branch will then send you flying high up into the air, allowing you to catch a final lightning bolt and down your opponent for the Deathblow. 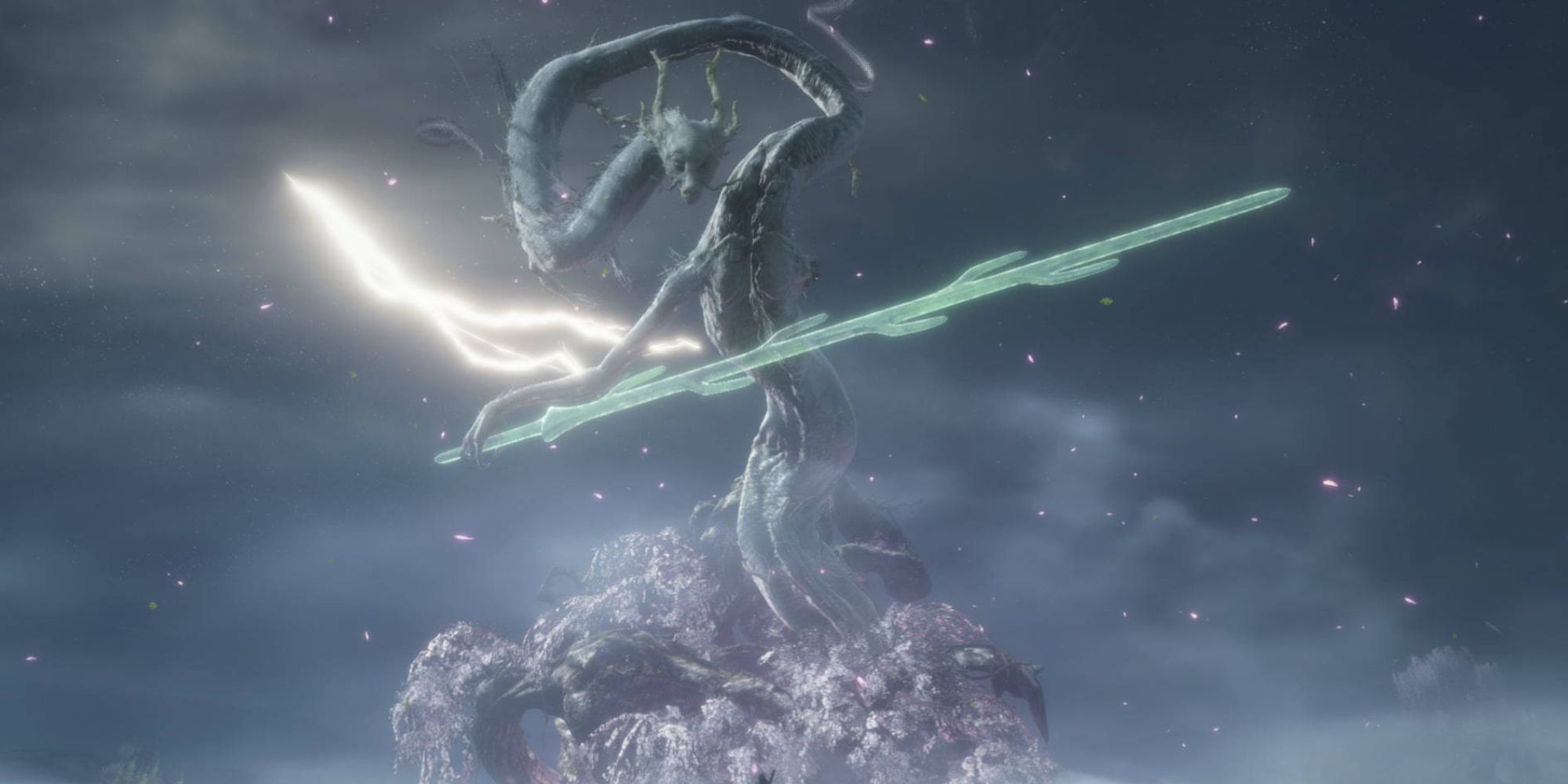 Compared to the likes of Sword Saint Isshin, Lady Butterfly, Genichiro, and so on, it’s a very easy fight but remains the most intense due to its spectacle. The cloud-filled arena where the fight takes place is filled with petals and mist which is constantly whipped around due to the dragon’s attacks, as lightning strikes the ground around you to create a truly memorable scene. The way the music gradually swells to a crescendo as you deliver the final blow fills you with a rush that very few other games manage to replicate. Even The Divine Dragon’s design manages to incorporate the unique way the studio tells its stories – its missing left arm, a recurring injury that can be seen on some of the game’s most important characters – making the fight an incredible culmination of everything great about a FromSoftware game.

The Divine Dragon might not have you throwing your controller at the wall or deleting the game from your console in a fit of rage, but it doesn’t need to in order to make a lasting impression. It’s a fight I often find myself looking back at whenever I want to recall some of my favorite moments in any FromSoft game, and that speaks volumes in itself.