When The Beach came out in 2000, star Leonardo DiCaprio and director Danny Boyle were two of the most sought-after talents in Hollywood. Titanic and Trainspotting had put both of their names on the map only a couple of years prior, giving everyone unreasonably high expectations for their first collaboration. Even the book it’s based on was a massive success for its first-time author, 26-year-old Alex Garland, who later went on to write and direct Ex Machina and Annihilation, as well as DmC: Devil May Cry and Enslaved: Odyssey to the West. The movie should have been a slam dunk for everyone involved, but unfortunately, it didn’t turn out that way.

Two decades later, the world has mostly forgotten what a waste of time The Beach was. In a misguided attempt to cash in on DiCaprio’s star power and hormone-ridden teenage following, the movie forsakes the novel’s exploration of psychoanalytic theory and Gen X youth culture in favor of shirtless, hard-bodied co-eds and a forever spring break that feels more aspirational than foreboding, even in the end. It’s a bad movie that fails the novel in a number of ways, but one of its greatest offenses that still bothers me to this day is the video game sequence at the start of the final act. If you’ve seen the movie, you probably just cringed at the memory of it. If not, here’s a description of one of cinema’s greatest crimes.

After months of living in paradise in a commune of young backpackers on a secret island in Thailand, things are starting to fall apart. A shark attack devastated the camp and left a trio of Swedish residents either dead or near death, division is growing as groups splinter and form factions, and Richard (DiCaprio) has accidentally invited a new group of travellers to the beach at the worst time possible. The leader of the commune, Sal (Tilda Swinton) tasks Richard with observing the new group as they make the arduous journey across the sea and through the jungle to find the hidden beach. If they somehow make it, he’s to divert them by any means necessary.

Richard starts spending a lot of time alone making trips from one side of the island to the other in order to keep tabs on the new group. To entertain himself on these missions, Richard imagines that he’s a character in a video game, fighting wild tigers and spiders as he marches around in the jungle. Take a look at the scene yourself if you think you can stomach it.

Where do we even start with this? DiCaprio is pumping his arms like an olympic speed walker and emoting like a silent film character, neither of which gives us the sense that he’s a video game character. When he sees enemies like tigers and spiders his job is apparently just to walk past them. When a bird squawks in his face, he bonks himself on the head and swings his arm as if to say ‘aw shucks!’, complete with cliched cartoon sound effects. I’m not even going to get into that Blur song. Apart from some generic UI that shows his points and health bar, this is not what any video game has ever looked like. Unfortunately, it is pretty close to what a lot of people think video games look like, especially in the early ‘00s.

Video games are a big part of Richard’s character in the novel. His one real friendship develops with Keaty (played by Paterson Joseph in the film) over their shared interest in video games. Richard agrees to go on the dangerous rice run with Jed (a character who isn’t in the film) because he wants to buy new batteries for Keaty’s Game Boy. He often relates to the challenges he faces in terms of video games, which isn’t totally dissimilar to what we saw in that scene. As a way to keep himself entertained during missions, he gives himself three lives and loses one every time he steps on a stick or makes a noise. The gamer scene is meant to represent that idea in a cinematic way, but it’s completely out of place without context, hideous looking, and worst of all, extremely cringe.

Richard seeks out the beach because he is disillusioned with society, but he quickly finds himself disillusioned by the banality of life on the beach as well. Coming of age in the ‘80s, Richard grew up on video games, action comic books, and war movies like Platoon and Apocalypse Now. Richard goes to the beach because he’s looking for his own version of Vietnam, and all he finds is soccer games and beach bums, he creates his own war. The last line of the book is “I play video games. I got my thousand-yard stare. I carry a lot of scars. I like the way that sounds. I carry a lot of scars.” 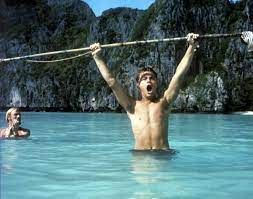 But that’s not what the movie is about. Richard has a great life on the beach. He steals Etienne’s girlfriend Francoise (something he only fantasizes about in the novel) and has a one-night fling with camp leader Sal (something that would have been preposterous in the novel). He’s handsome, he’s charming, he’s not even British, everyone likes him, and he’s nothing like the awkward, reclusive Richard from Garland’s book. This is Hollywood heartthrob Leonardo DiCaprio after all, you’re not going to make him an actual nerd. The last line of the film sums up how vacuous the whole thing really is. “I still believe in paradise,” Richard says. “But now at least I know it's not someplace you can look for. Because it's not where you go. It's how you feel for a moment in your life when you're a part of something. And if you find that moment, it lasts forever.” Deep.

This is why the video game scene stands out much. While it’s meant to hamfistedly show Richard starting to disconnect from reality – a concept the movie quickly doubles down on by giving him a full-blown war flashback minutes later – it’s so out of place and bizarre that it only serves to make games look cringey and immature, rather than Richard. Films have represented games as annoying distractions and gamers as childish outcasts plenty of times, but this scene from The Beach is one of the all-time worst examples. Thank god this movie was critically-panned and quickly forgotten or we might still be dealing with the consequences of it all these years later. It’s the worst scene in a terrible movie, and if the prequel series does happen – which I pray it won’t, it best stay far, far away from video games.