There's a gap of about ten years between The House Of The Dead series' last console launch (HOTD4 on PS3 in 2012) and the original's HD Remake. In turn, gaming technology has advanced a lot since then. As a result, the remake's developer, MegaPixel Studio, put in plenty of effort to take advantage of what's available in today's market.

Therefore, when you start playing The House Of The Dead: Remake, you'll likely notice a lot of different controller options. This abundance of options allows players to tailor gameplay to their preferences. However, they can also feel overwhelming if you don't know how these options work. So, here's what you need to know. 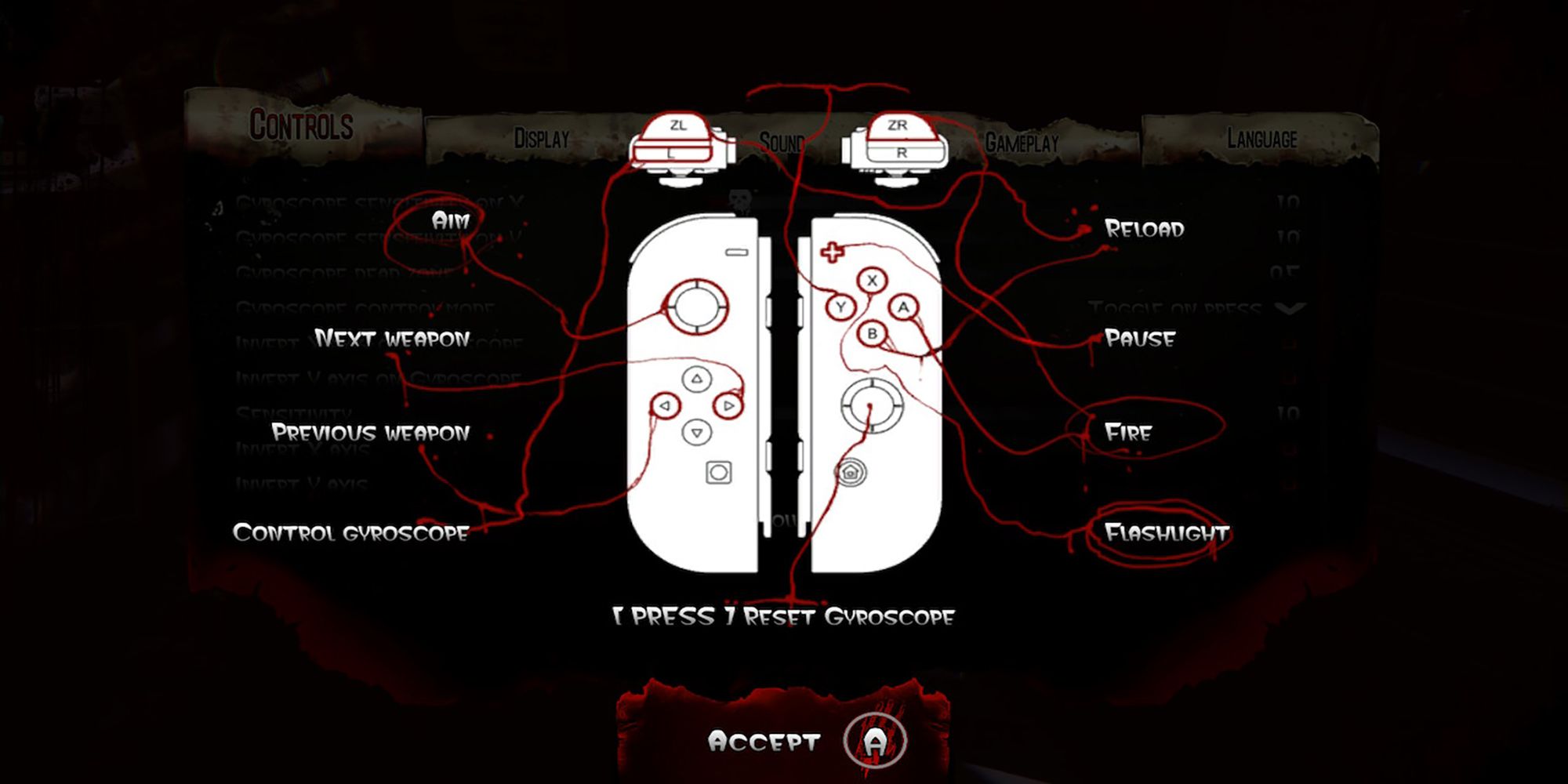 The traditional control scheme maps the various functions of the House Of The Dead arcade experience to a gamepad. If you're not for gimmicky peripherals and prefer aiming and shooting with a console controller, this scheme is best.

Using the traditional control scheme, you can fire and reload with either the face buttons or triggers while aiming with a thumbstick. Additional functions, like weapon changes and flashlight usage, are mapped to face buttons and the directional pad. 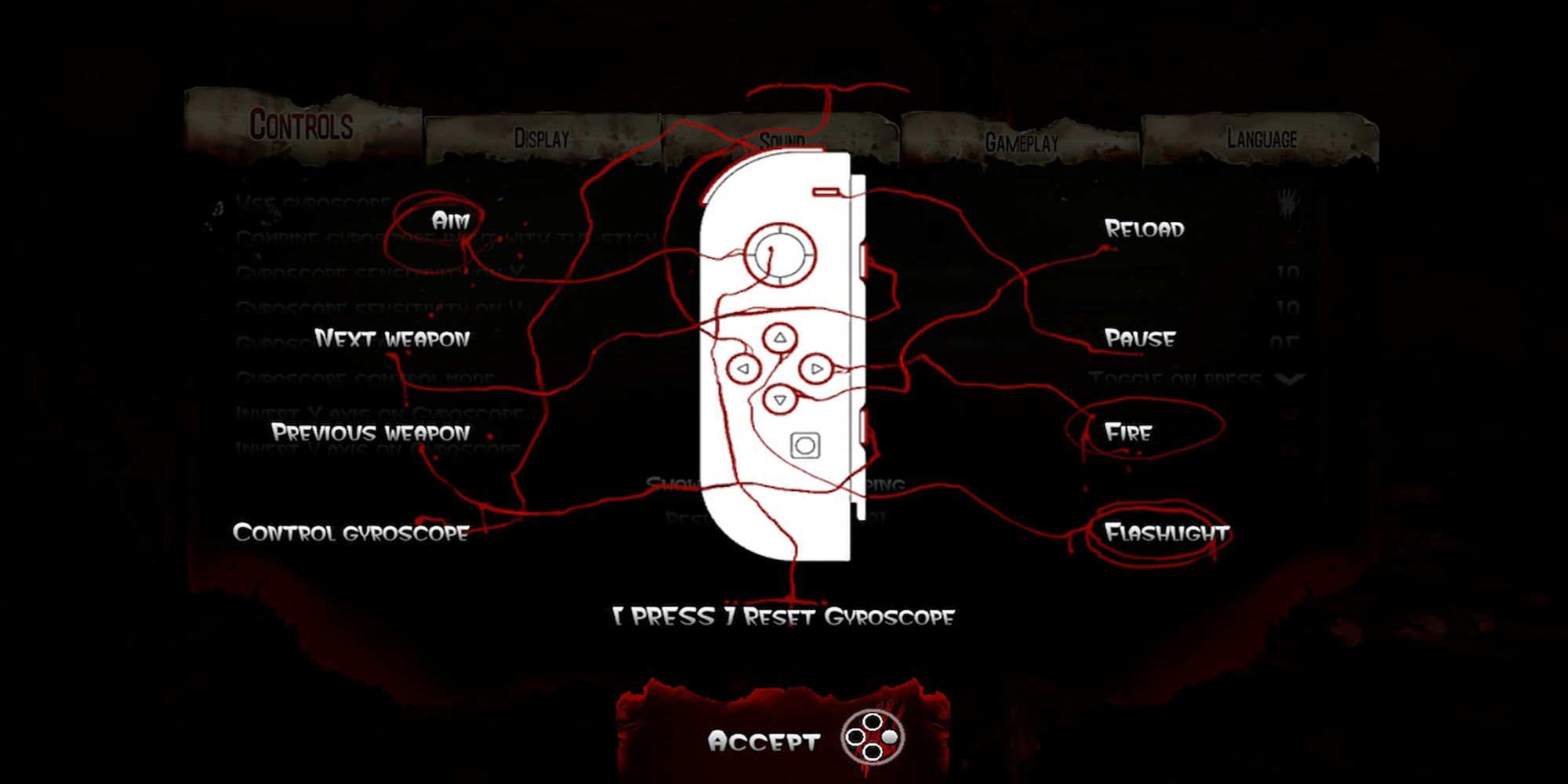 The single joy-con control scheme enables local multiplayer with only one set of joy-cons. Certain functions, like weapon changing, get reassigned to SL and SR in this situation. You can enable single joy-con mode in both tabletop and TV mode.

Another unique feature of the single joy-con mode is support for both gyroscope and traditional controls. However, the gamepad control scheme only functions vertically. Therefore, you cannot hold your joy-con sideways like a traditional gamepad. This detail makes gyroscope controls the more comfortable choice in a single joy-con setup. 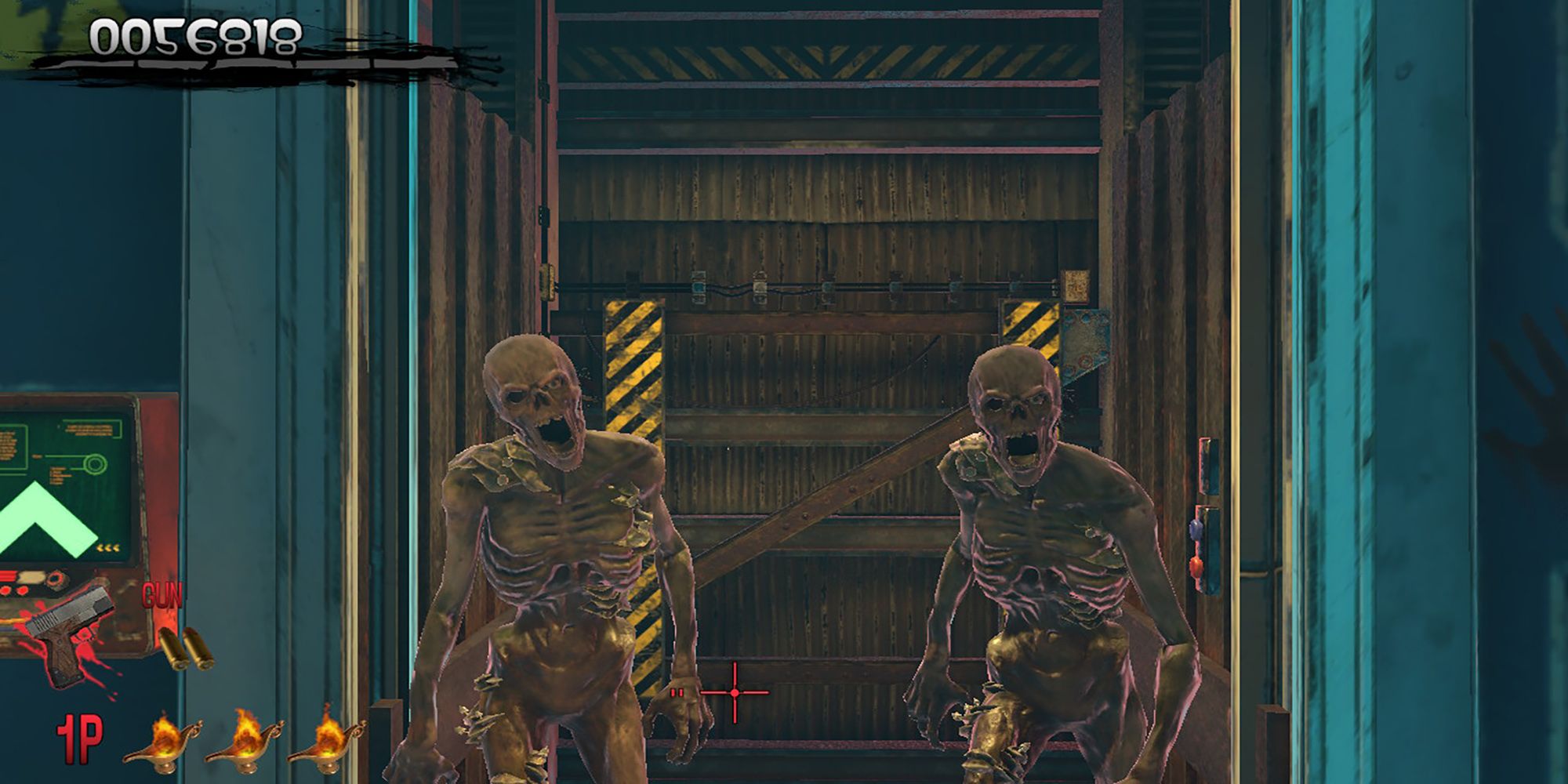 Annihilating hordes of zombies is always a campy good time. Still, The House Of The Dead experience feels incomplete without intuitive light-gun shooting. Luckily, the game's developers included options that take advantage of motion controls to recreate the feeling.

Motion controls in video games are always a hit or miss, and The House Of The Dead: Remake makes a so-so attempt. Still, the game offers plenty of options to tailor its controls' mobility to your liking. For instance, you can adjust gyroscope sensitivity, set a dead zone, implement inverted aiming, etc. For this reason, we recommend checking out the game's control options and tinkering a bit before writing off gyroscope controls.

Gyroscope controls also work with Nintendo Switch's handheld mode. In this case, the aiming feels a little like the motion controls of a Wii U title, where your aim follows the tilt of the console. 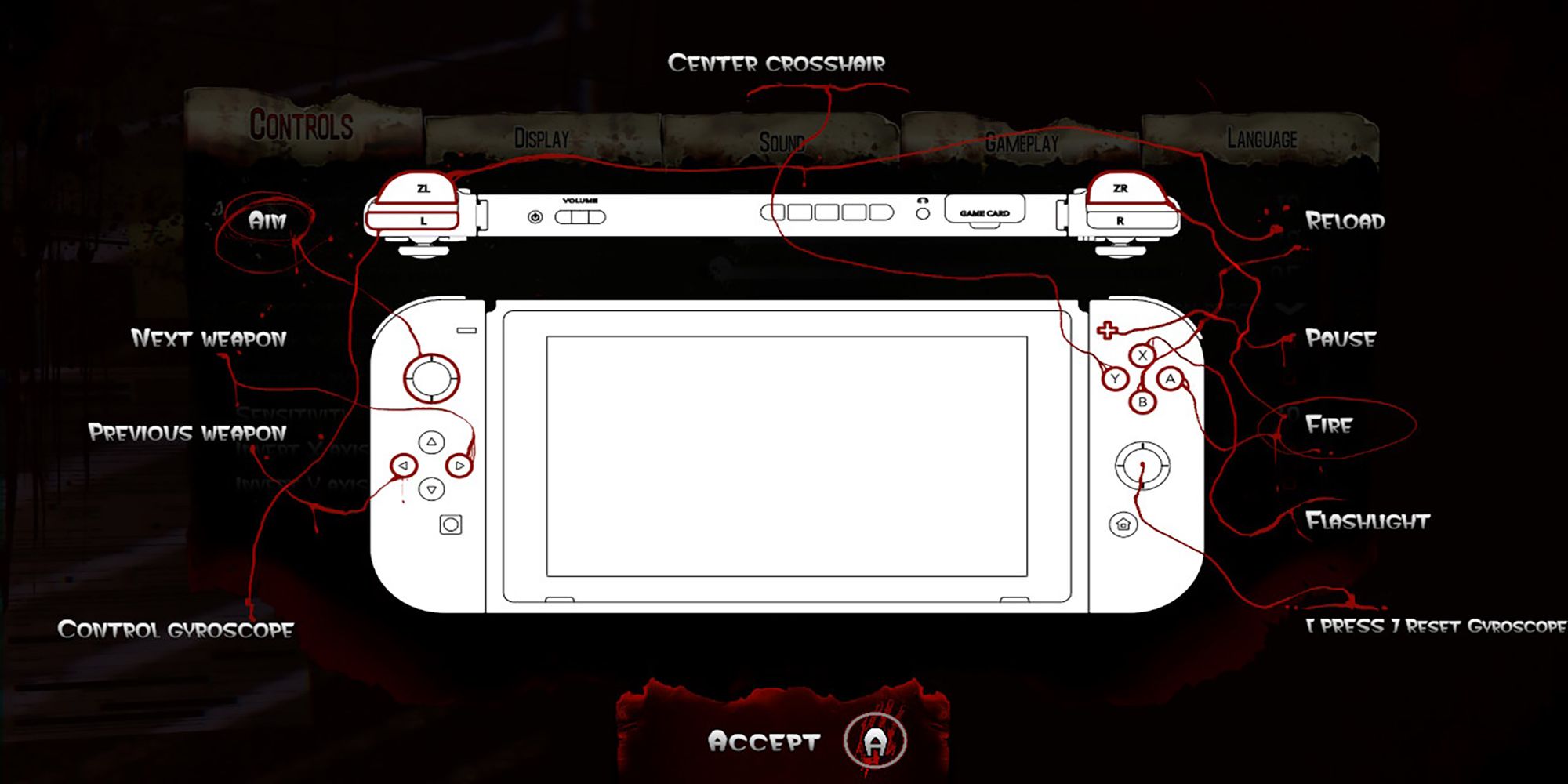 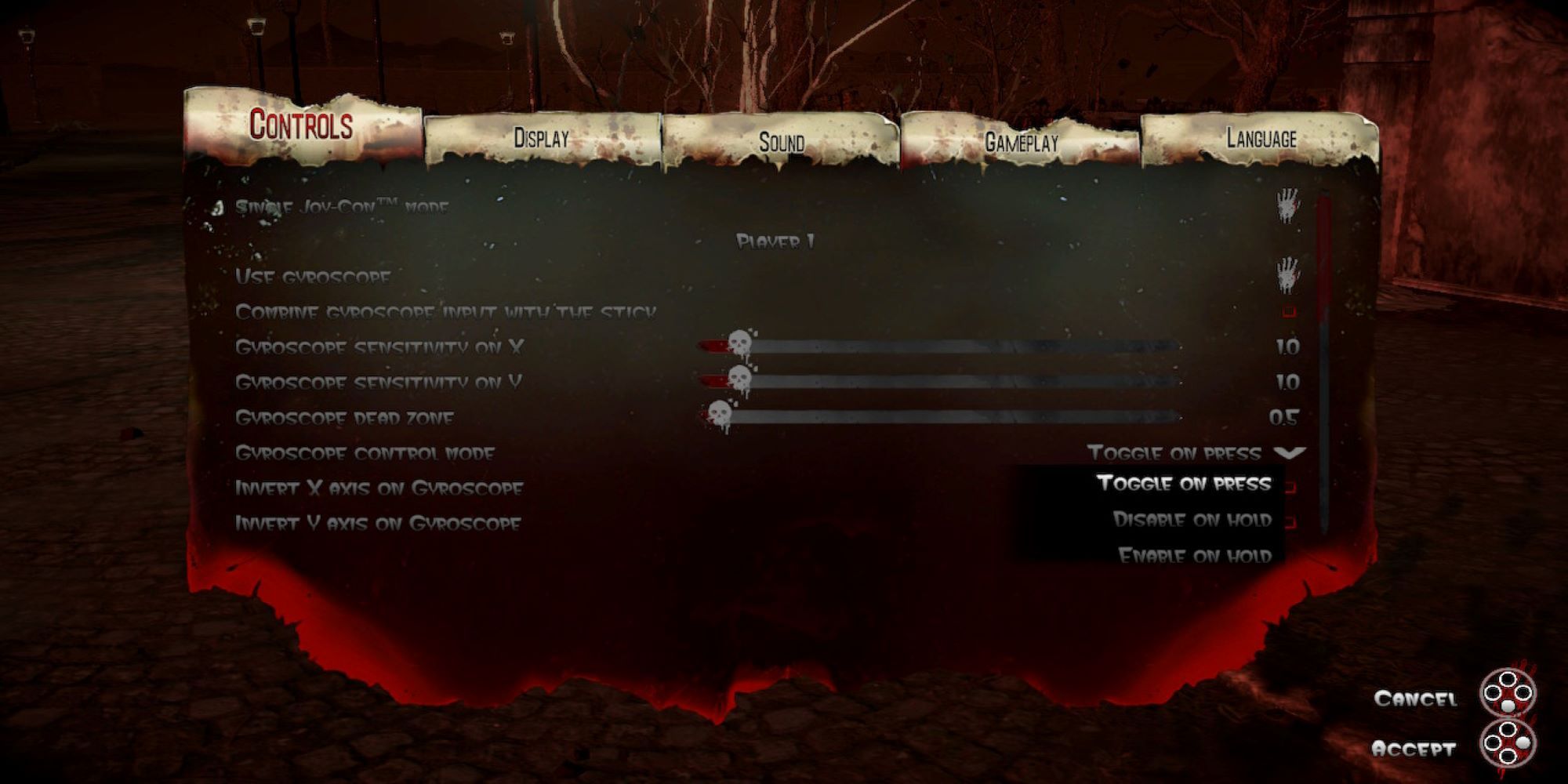 The House Of The Dead: Remake offers plenty of options for hybrid control. For instance, hybrid controls work with a single joy-con or gamepad. Furthermore, when using hybrid controls with a gamepad, you can choose which thumbstick handles traditional aiming. Finally, when playing single-player with two joy-cons, you can designate which joy-con handles gyroscope aiming.