My most anticipated game for SGDQ last week was The Lord of the Rings: The Return of the King. I’ve not played the game since I was a kid, and while I still have it on GameCube, I’ve got some audio problems with the console that I need to fix before I can replay any of my childhood favourites. The SGDQ run was fairly straightforward, more about optimising levels and kicking arse than performing complex glitches or breaking the game as other speedrunners often do, and this helped to bring back my memories stronger than ever. I love all speedruns, especially at GDQ, but watching Linkus7 perform a thousand inputs a second to propel Link arse-first through the seas of The Wind Waker doesn’t really reflect how I played it.

The Return of the King run by Maxylobes was beautifully nostalgic, and watching him run through the iconic levels brought the games of my childhood flooding back. He completed the entire game in the time it took child-me to do a few levels, but it was enough to remind me of just how good some of those movie tie-ins were.

The way Maylobes powered through waves of Uruk-hai with Gandalf was magnificent, his shots with Legolas’ bow were pixel perfect, and his dodging of the ever-present Eye of Sauron was exemplary. What do you expect from an SGDQ speedrunner? Even with all that going on, the one thing that struck me most was Sam’s levels, and in particular his fight in Cirith Ungol.

Samwise Gamgee is the hero of the Lord of the Rings. Anyone who has read the books, or even just watched the films, knows this. Sure, Frodo carried the Ring, but Sam carried him (often literally). While Frodo got the plaudits, and more importantly the catharsis of casting the infernal jewellery into the fires of Mount Doom, Sam didn’t get that moment. What’s more, Frodo soon made the journey to the Undying Lands, leaving Sam alone in The Shire. He had his beloved Rosie, but he and Frodo had a shared experience, shared trauma, that he was unlikely ever able to overcome. He was happy with Rosie – they had 13 kids (do they not have tellies in The Shire?) – but I always felt like he lacked that moment of catharsis that Frodo got when he destroyed the Ring, Aragorn when he ascended to the throne, or Merry when he crucially stabbed the Witch King. That changes in the movie tie-in game to the Return of the King.

Sam approaches Cirith Ungol alone, attempting to save his best friend Frodo after he has been captured by Orcs. In the books, the lowly Hobbit sounds the alarm to cause the Orcs to evacuate, and in the Jackson, Walsh, and Boyens trilogy he kills a handful of Orcs before accidentally triggering a huge fight that he plays no further part in, but in the video game he gains superhuman (superhobbit?) fighting abilities and decides to take on the armies of Mordor alone.

Let me get one thing straight. This is entirely out of character for Sam, it bastardises Tolkien’s ideas for the character, and it practically contradicts everything that Sam’s character is about. But sometimes video games have to video game, and Sam ploughing through hordes of Orcs feels so satisfying. 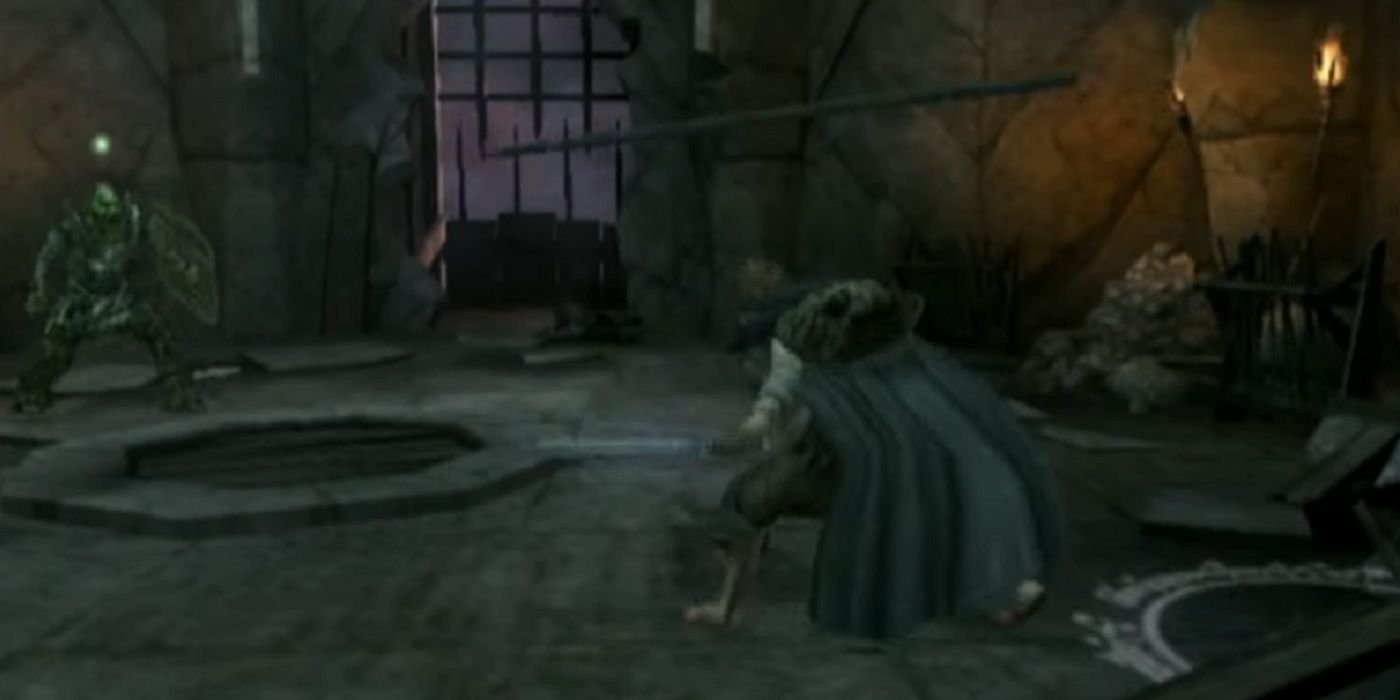 Sam runs headfirst at the tower of Cirith Ungol, mowing down Orcs with Sting in hand. After playing the support character for so long, this is time in the spotlight. He shouldn’t be as fierce a warrior as Boromir or as hardy as Aragon, but he’s brave above all else, and would do anything for his friend. Running up the tower of Cirith Ungol, killing Orcs left, right, and centre, isn’t entirely out of character for Sam, even if it’s unrealistic and isn’t anything like what Tolkien imagined for him. You also have to remember that this game is based on the film, rather than the book, so accuracy is hardly paramount.

As a player, mashing the attack button and firing giant ballistas to take out bridges and rack up hundreds of kills is a hugely cathartic experience. It’s Sam’s hero moment, something that he doesn’t adequately receive in the books or films, and it feels so good. We know he’s the hero of this epic tale without him needing to kill a million baddies, but where’s the fun in that? Sometimes we need to put accuracy aside, and let video games be fun for the sake of it.